Nothing can really prepare you for Pompeii. The instant journey back in time as you explore its streets and houses, the clear picture you see of how life was lived then. Here’s what to expect and how to get the most from your visit to Pompeii. 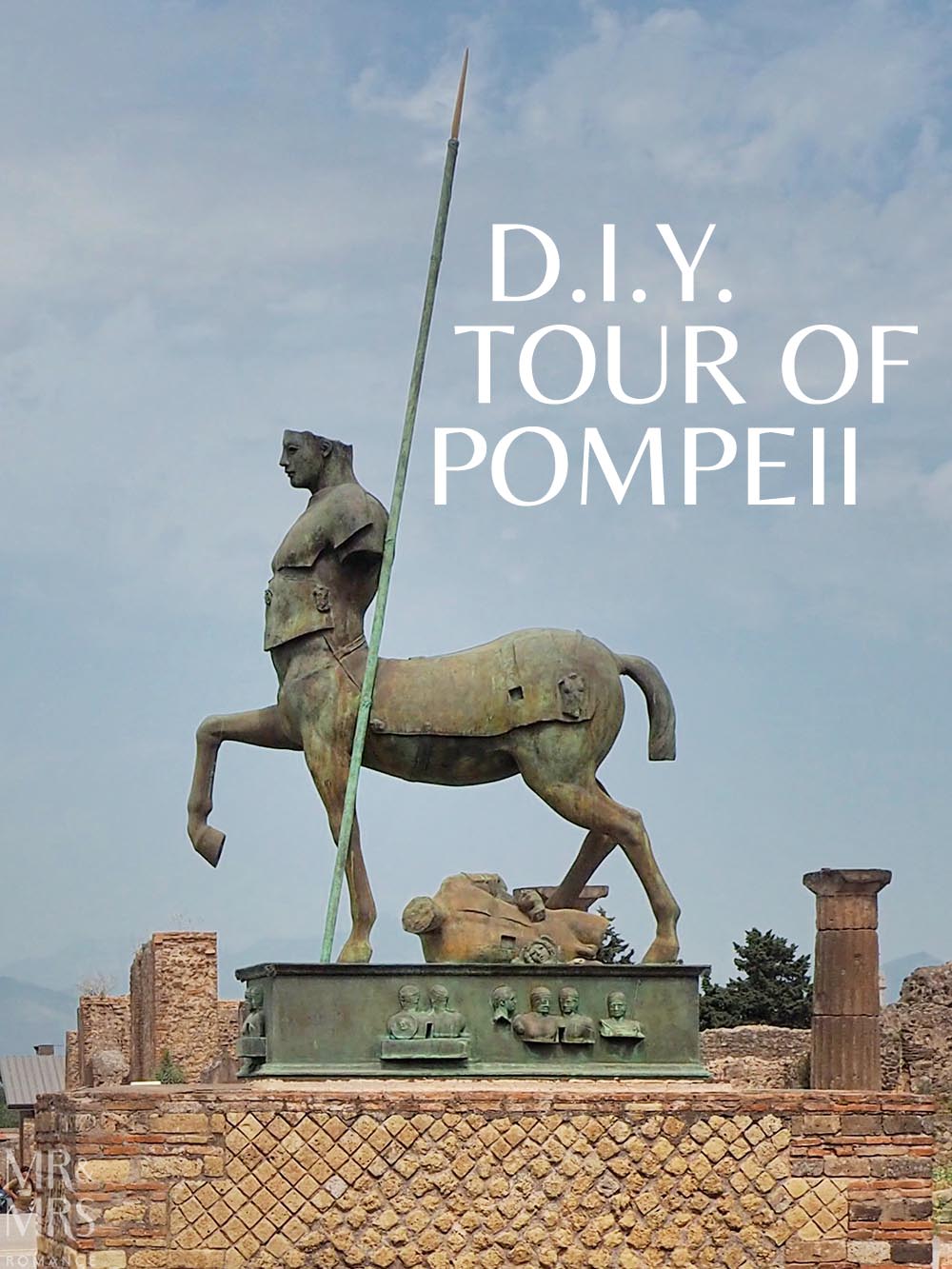 It happened at noon on 24th August 79AD. Vesuvius, the mountain that loomed over one of the richest and most prosperous trade cities in the Roman Empire, exploded.

It was a Tuesday.

For the next 25 hours, ash, pumice and super-heated gas spewed from the volcano consuming Pompeii and its residents, preserving a slice of Ancient Rome in a time capsule only unearthed in 1748.

And even though archaeologists since then have been excavating this city for almost 300 years, still over a third of Pompeii remains untouched, uncovered and undisturbed. This sleeping giant, woken after 1700 years, is still revealing secrets lost for millennia.

Check out our video walkthrough of Pompeii, which shows some of our favourite parts of this incredible city:

How to get the best out of your visit to Pompeii

Pompeii is on the main train line from Naples and from the Amalfi Coast. It’s much cheaper than a taxi and, thanks to the bad traffic there, quicker too. You don’t need a car.

The Campania Express train is a limited stop train worth the extra Euro too. Mind though, the trains are old and rickety. Here’s more on getting from the Amalfi Coast to Pompeii by train.

You can even make a much longer journey of it – here’s our two-week itinerary that takes you from Provence in the South of France, all the way to Pompeii. 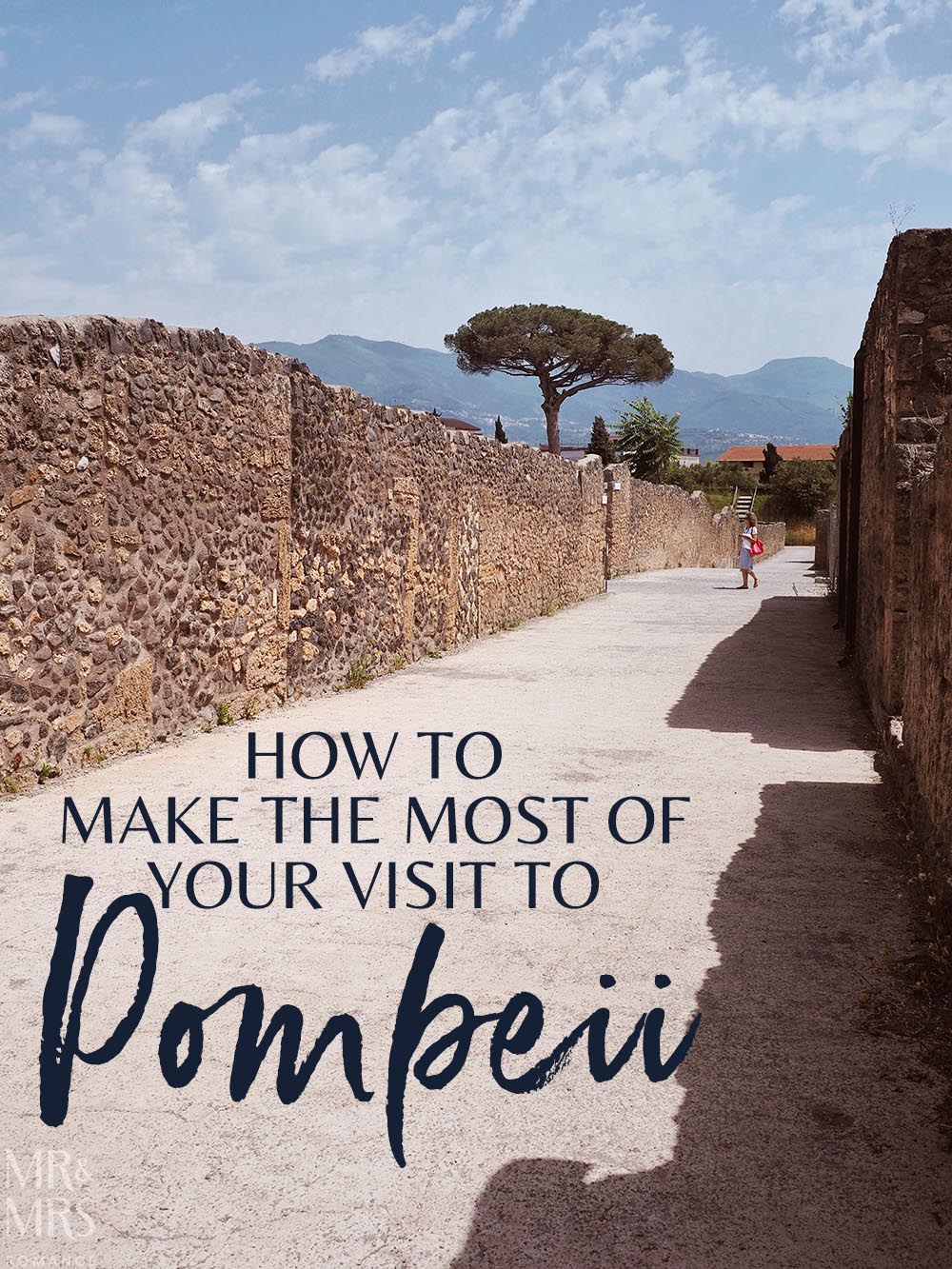 It can get really hot in Pompeii in summer – more so than the rest of this part of Italy. There’s not much air flow in the city, and because it’s all stone with very little vegetation, the heat really builds.

You’re also likely to be doing a lot of walking.

There are water fountains around the city, but I’m not too sure how safe they are. They’re built into the old street wells. Bringing your own bottle of water is the best option. Remember to bring sun cream too – summer in southern Italy is hot!

The majority of Pompeii is cobble or giant flagstone, and there’s a lot of walking involved. The city spans about 170 acres. Make sure you’re wearing comfortable shoes or your time here will really suffer.

There’s only one place to buy food in Pompeii (though at time of writing, they were building a restaurant). The food on offer isn’t great, though one of our favourite memories is sitting on the deep curbside of in the shade of Via del Foro near the incredible Forum and the Sanctuary of Apollo with a cold beer, sharing some taralli. 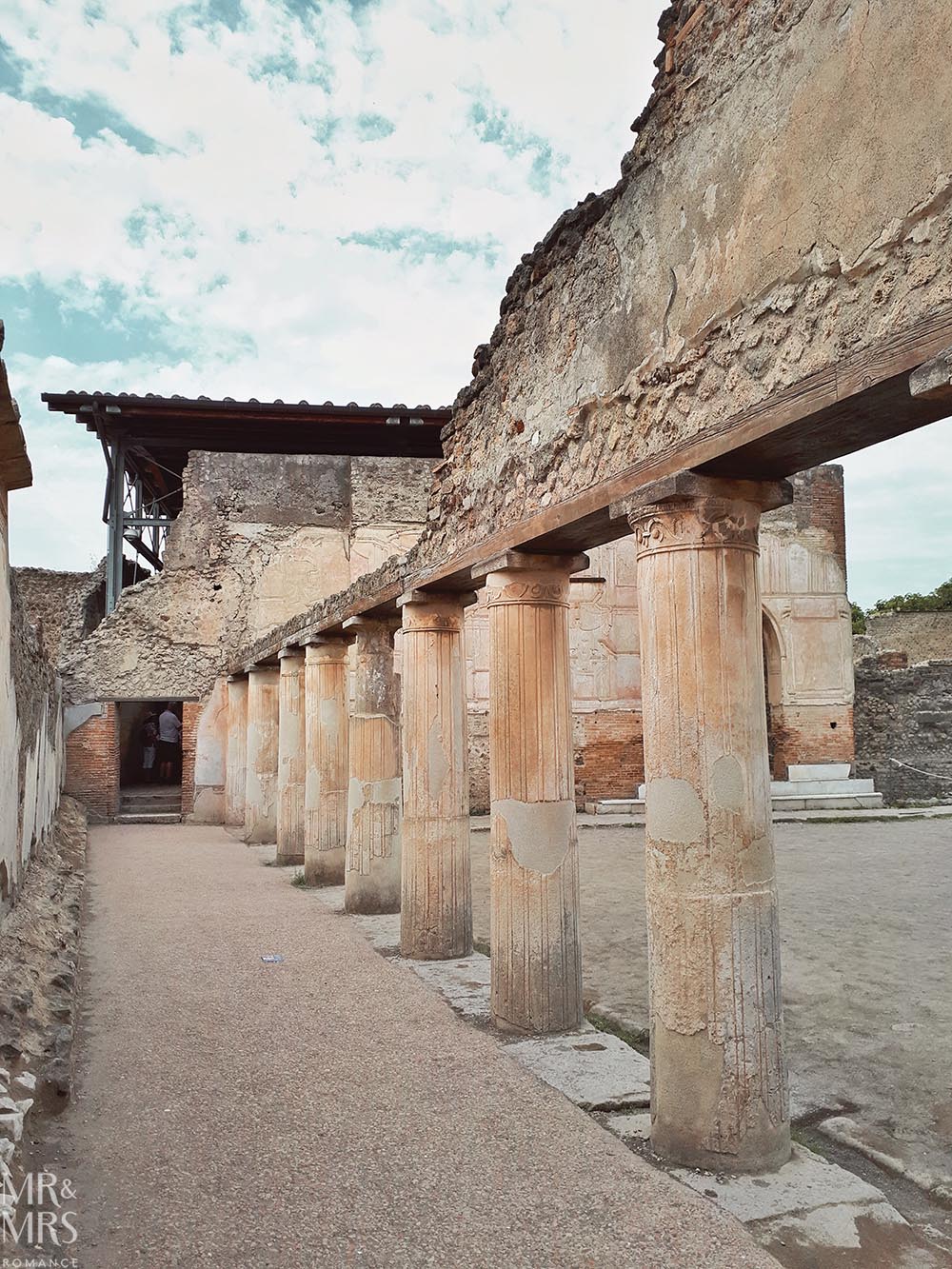 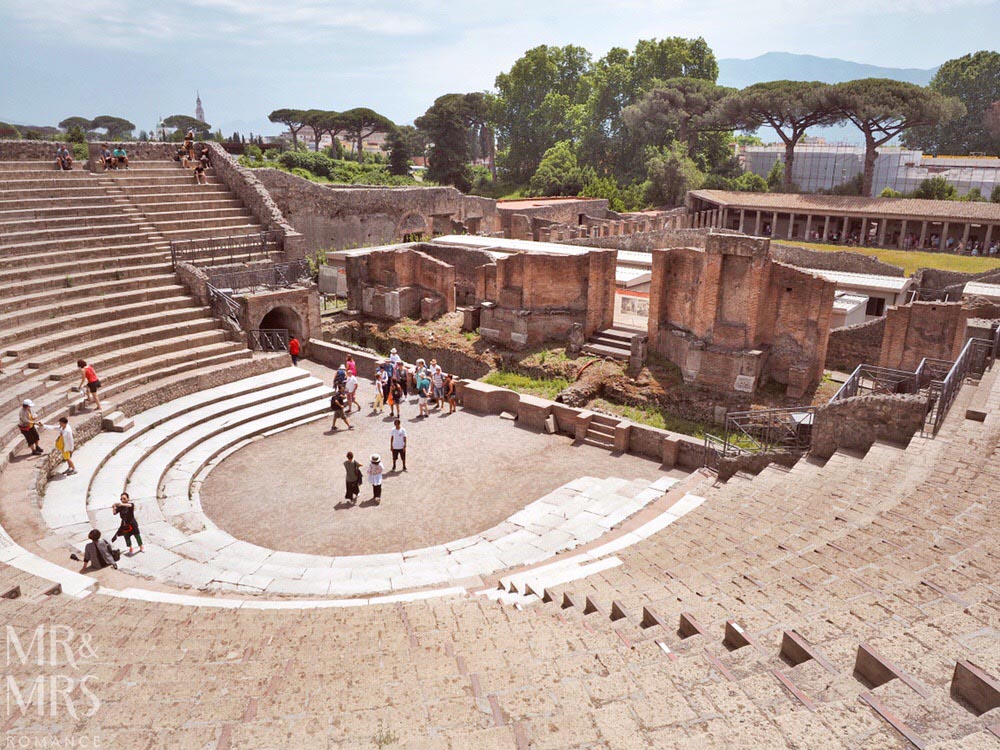 If you have data on your phone, you can look up details of what you’re looking at online. The official Pompeii website PompeiiSites.org has a great interactive map and lots of info.

If you don’t have data, we use Maps.me which allows you to plot a route and even tag and make notes on the map. It also has some info on important landmarks too.

You need to download the relevant map segment on wifi first though.

Pick up the official guide at the ticket desk – the ‘Plan of the Pompeii excavations’ booklet. It’s free, but has lots of information on the city including 4 different routes for you to choose from if you’re not sure which way to go.

These routes range from a quick 2 hours to a marathon 7 hours. This guide booklet is also available to download here.

And if you want an even more thorough guide, the one they have on the Pompeii website here is amazing. It’s pretty epic though at almost 150 pages long.

It might sound obvious, but make sure you bring your camera. Even if it’s just to take a photo of the bawdy frescos in the ‘den of iniquity’ – the Lupanare. 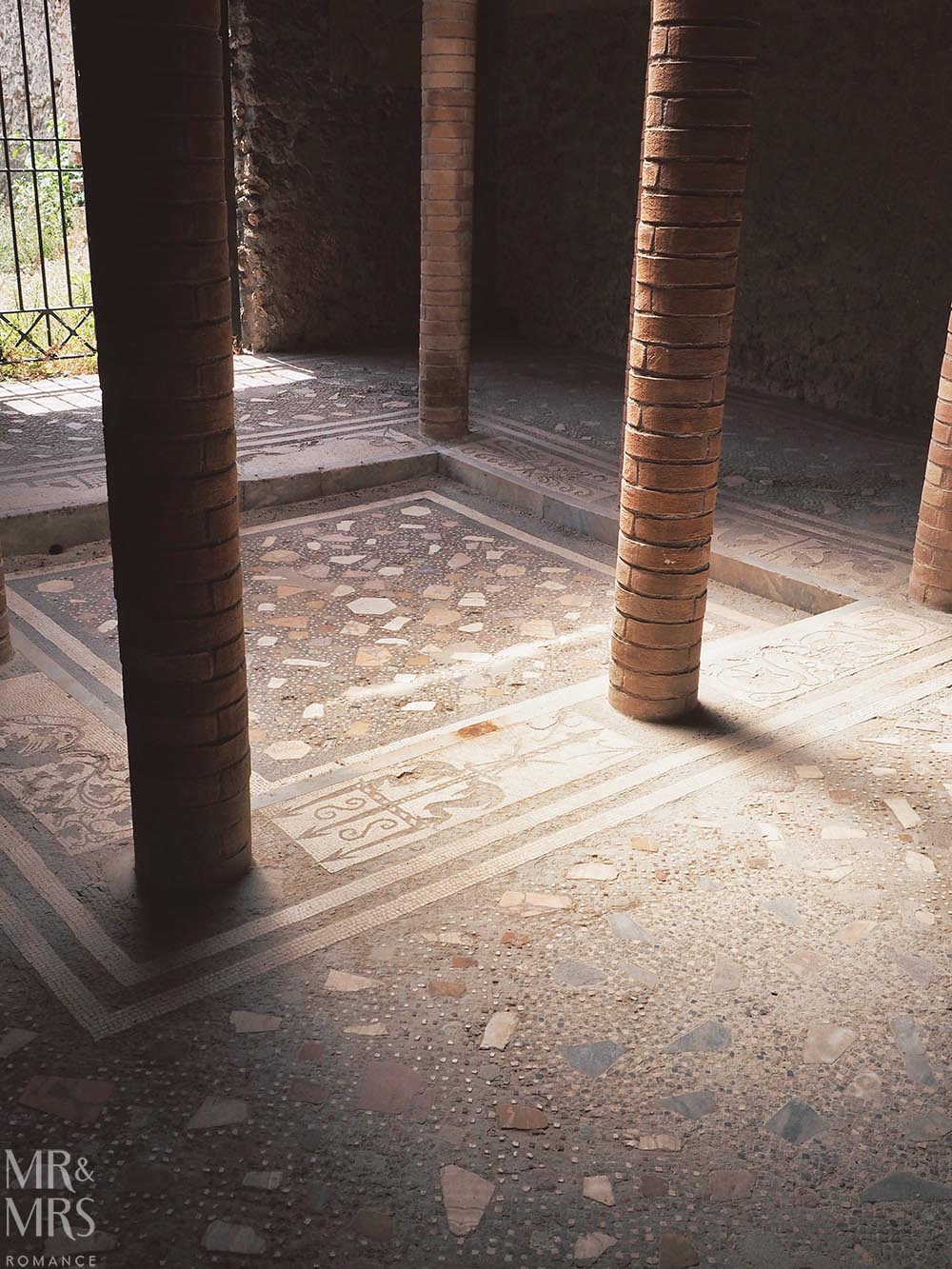 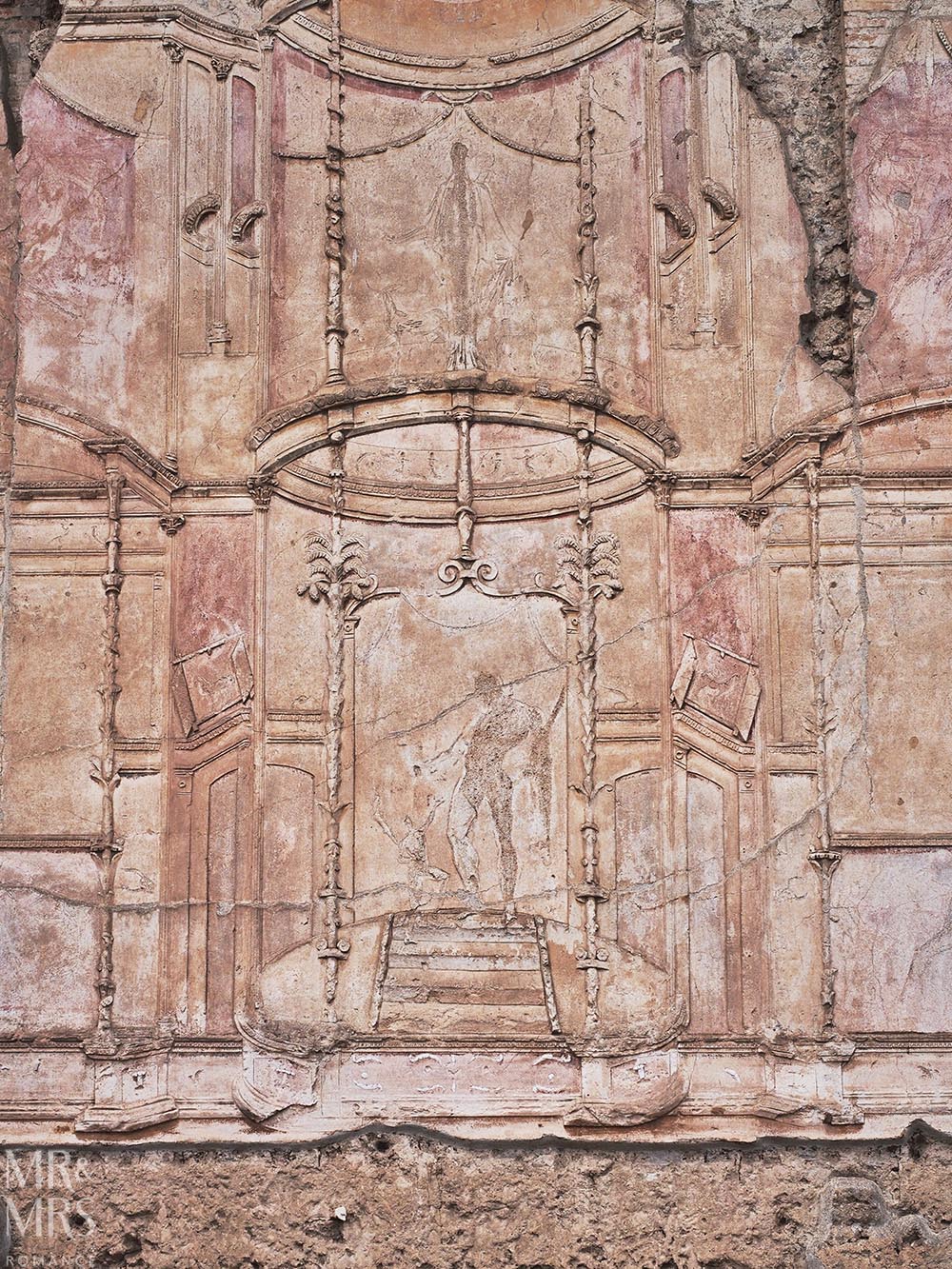 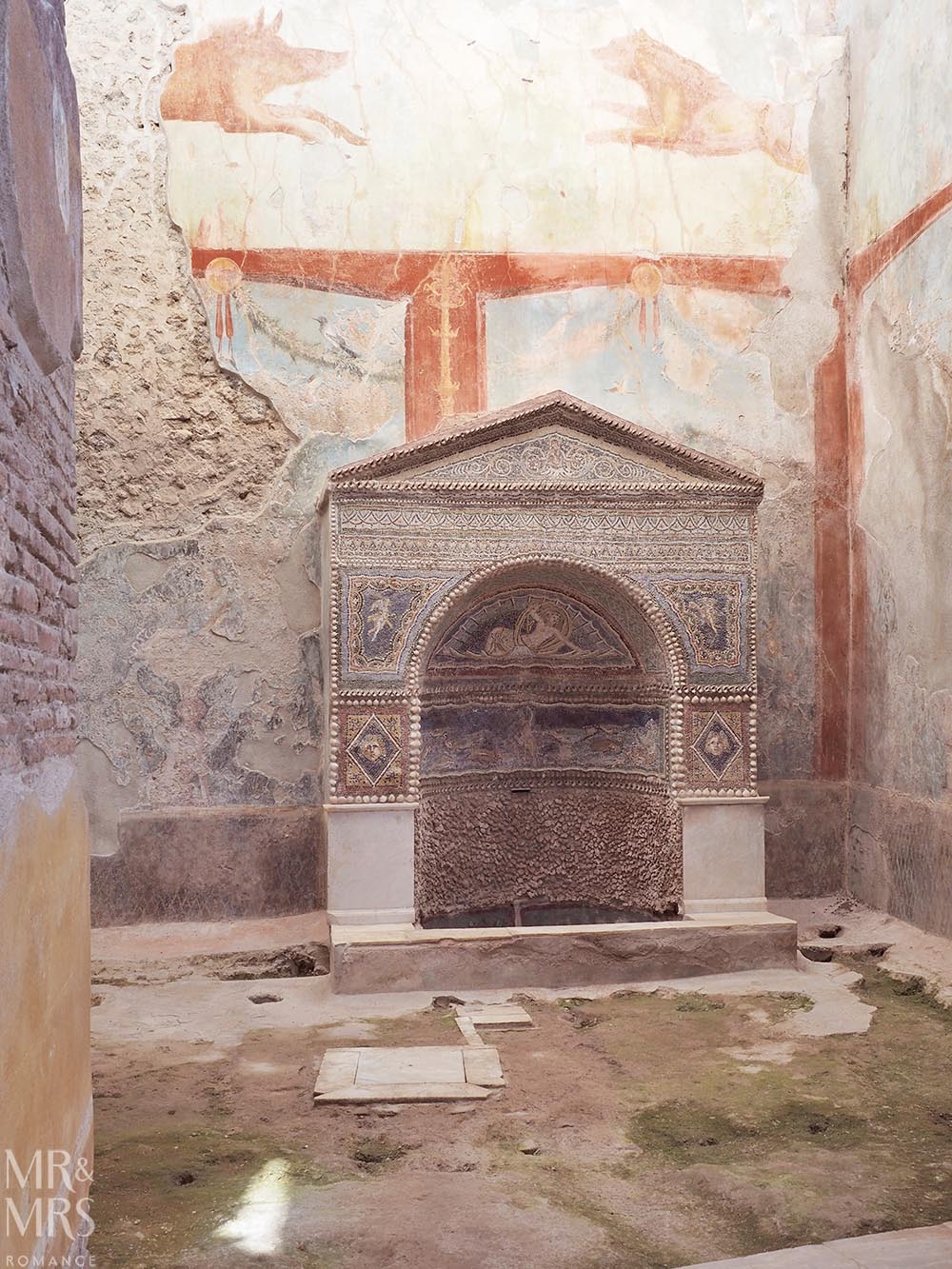 How much does it cost?

Ticket prices vary depending on your age and – surprisingly – nationality. If you’re between 18 and 24 and from the EU, you get a discount. If you’re under 18, you get in for free!

It’s free to get into Pompeii on the first Sunday of every month, which sounds excellent, but the site becomes very crowded.

Full adult tickets are E13 each.

Do you need a private tour guide?

We’re really torn when it comes to guided tours generally. In Pompeii, we’ve never had one and it doesn’t feel like we’ve missed too much.

Here’s more on whether having a guided tour in Pompeii is really worth it. 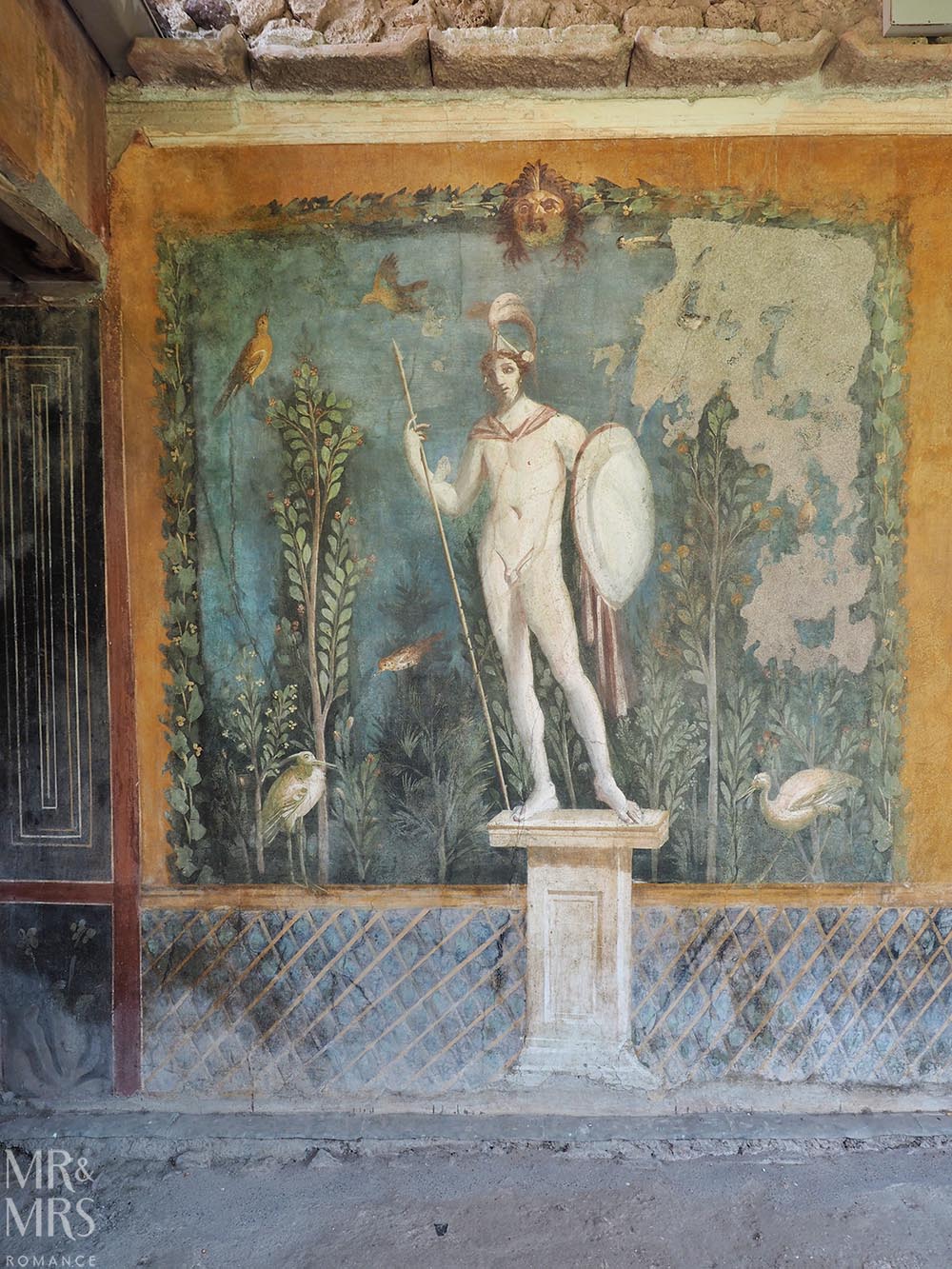 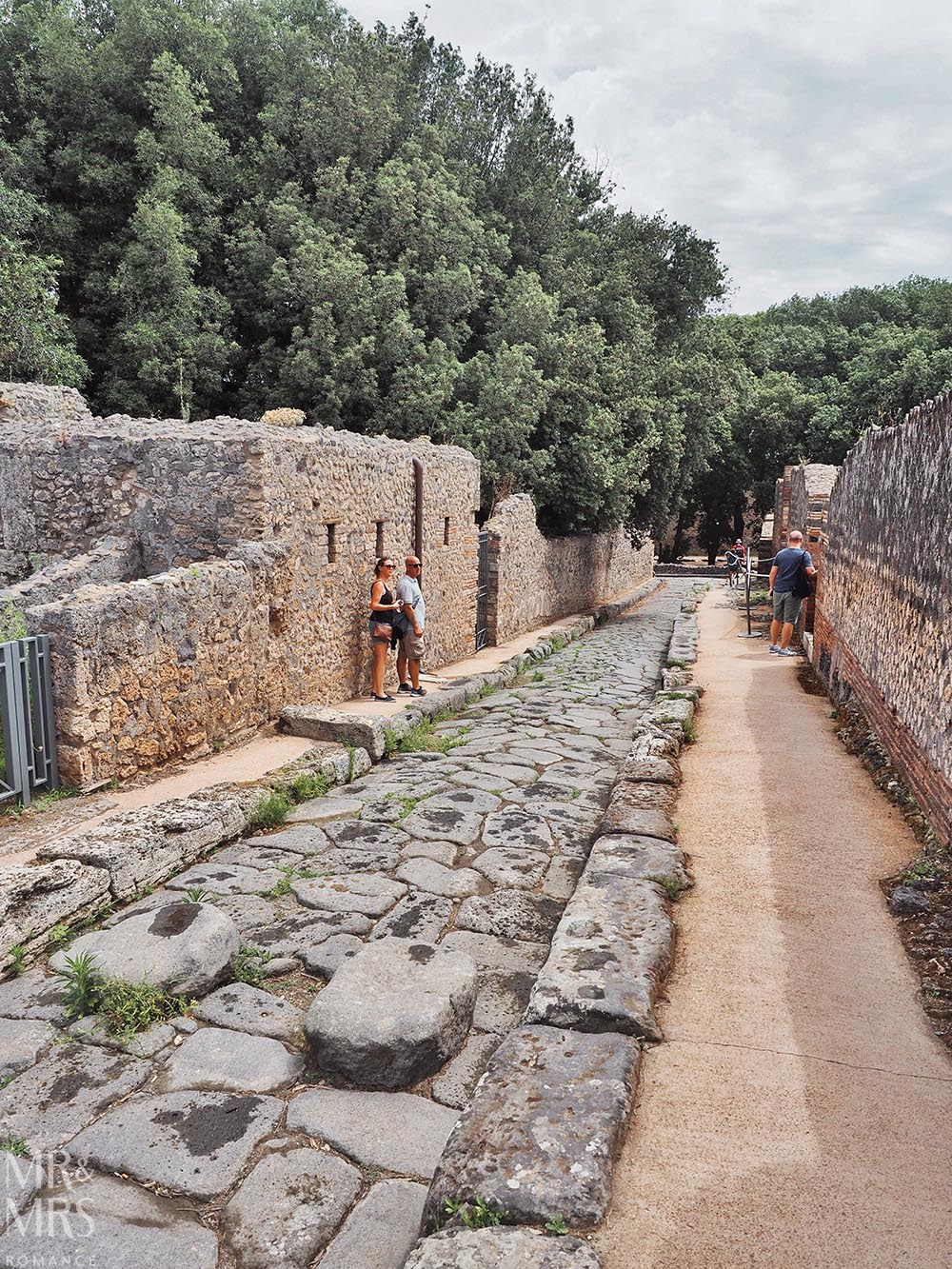 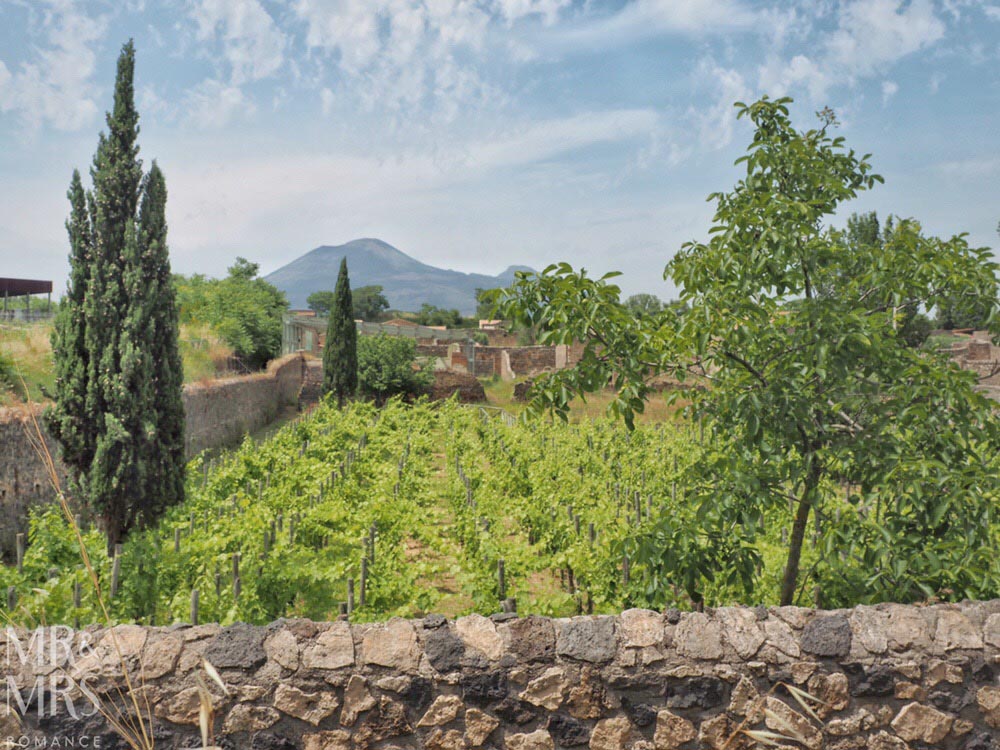 When does Pompeii open?

Pompeii opens at 9am every day and closes at 7.30pm between April – October and at 5.00pm November – March. Last entry is an hour and a half before they close.

The site is closed on May 1st every year (as well as January 1st and December 25th).

Throughout Pompeii, especially in Regions I, II and IX, you’ll find special exhibitions where staff will temporarily open villas for a short time. If you see the ropes being moved, wait and go in. There’s often some really special stuff inside. 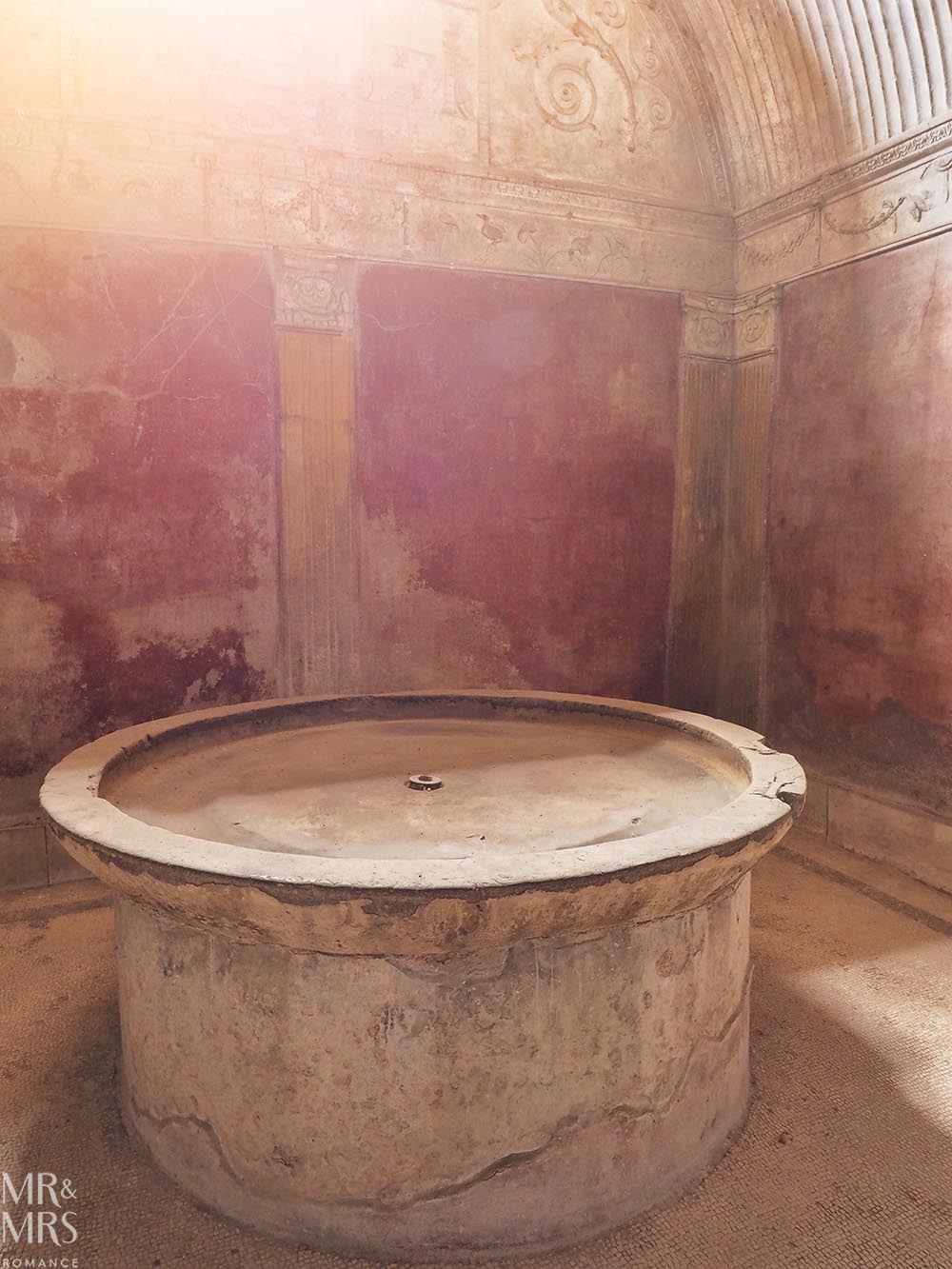 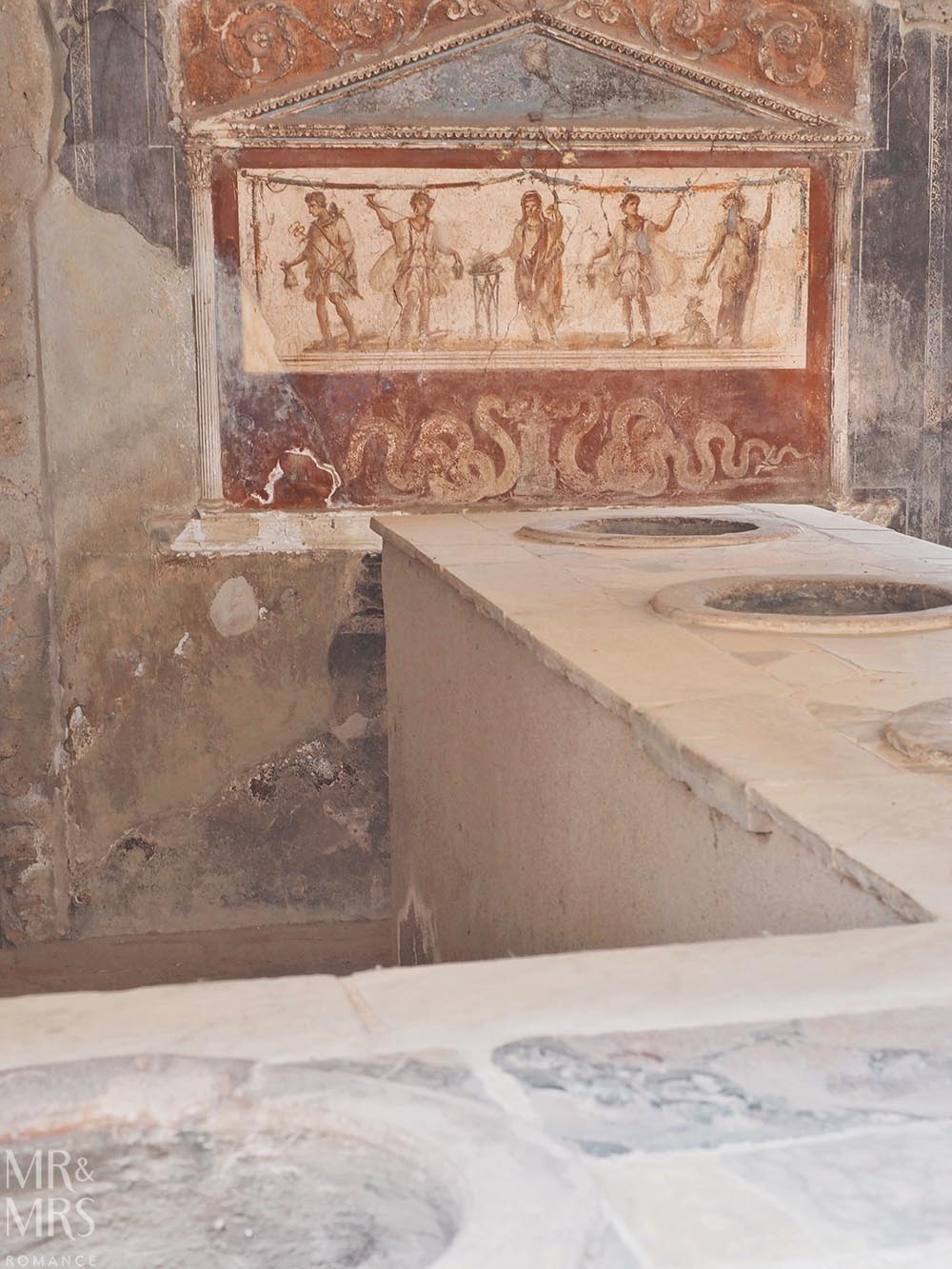 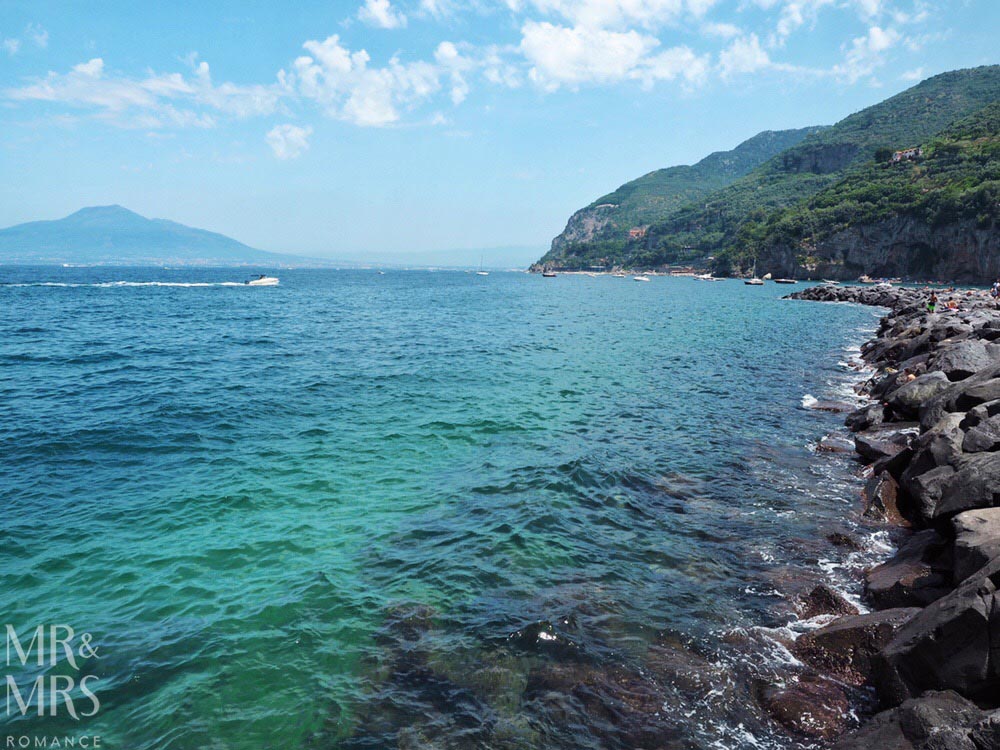 It’s important to remember is that what you see in Pompeii today doesn’t just represent Ancient Rome or that single fateful summer’s day in 79AD.

By the time Vesuvius erupted, Pompeii was already an ancient city. Founded some 700 -1000 years before by the Oscan peoples, then conquered by the Romans in 3rd Century BCE, Pompeii’s history stretches as far back as the early Iron Age.

As you walk the deep-paved boulevards and lanes of a city that’s perhaps 3000 years old, it’s like you can still hear the footsteps behind you of all those who once called Pompeii home. 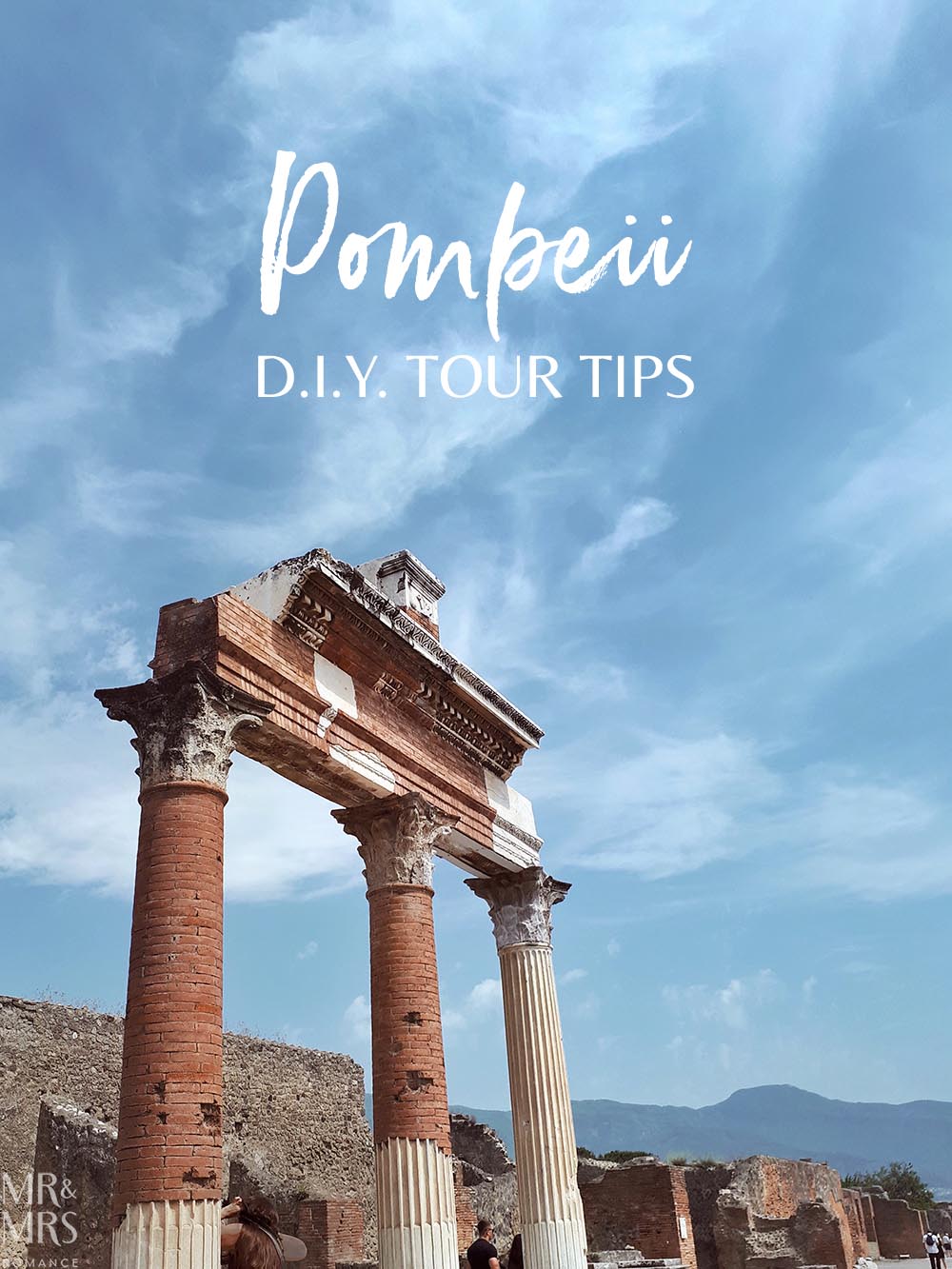 How to make the perfect gin martini