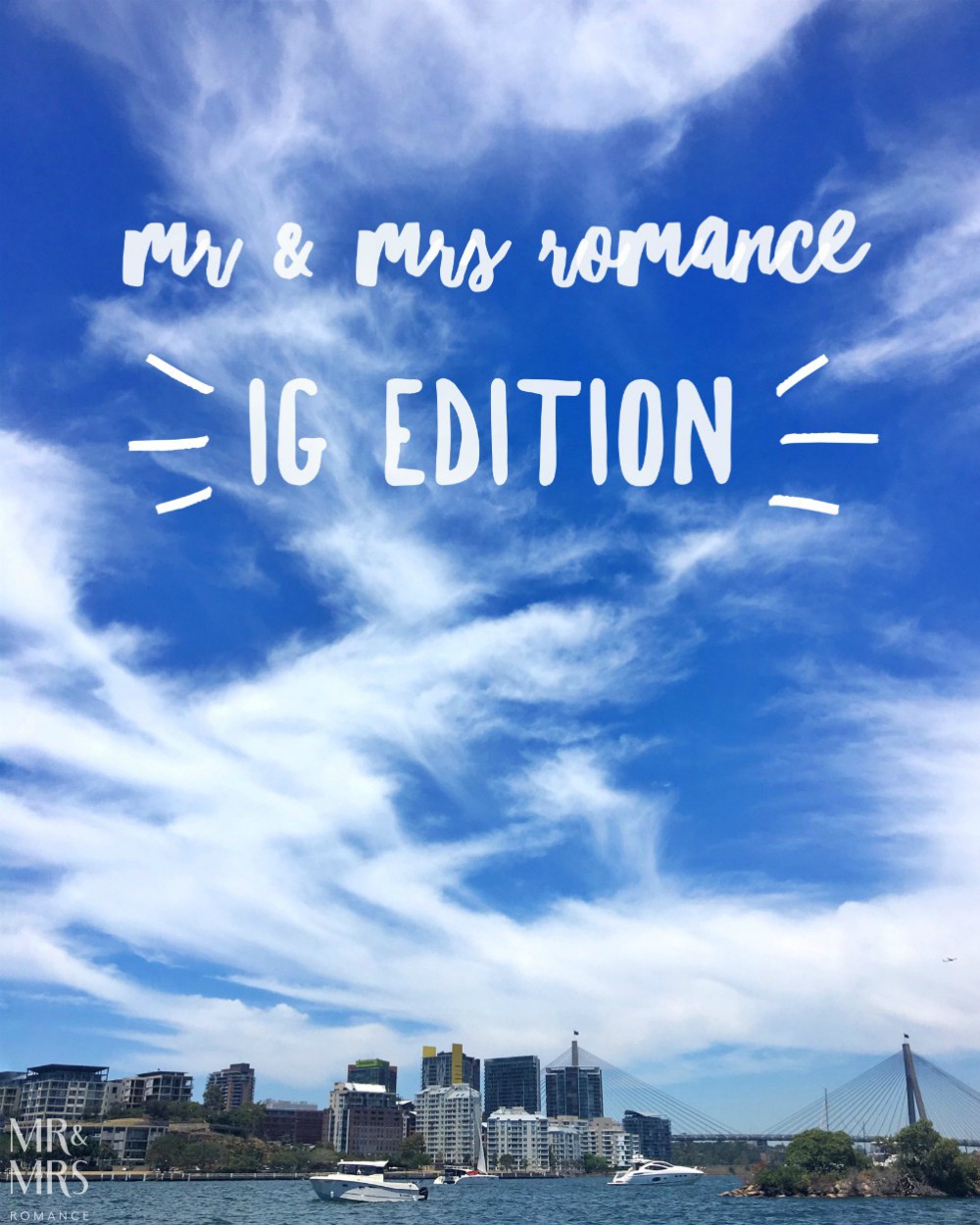 And like that, it was all over. As we force the box of decorations box back into storage for another year and the last of the pine needles gets sucked up the vacuum cleaner, we reflect on the Christmas and NYE just gone.

Early January is always a funny time of year, isn’t it? Hard to get the motors running again, but with all the ambition and expectation of a brand new year pushing you on at the same time.

To help with this conflict of energy, we like to look back a bit before going forward. It works a bit like one of those pull-back-and-go toy cars.

So here’s a recap on what’s been going on with us from Mrs Romance’s birthday just before Christmas until now. 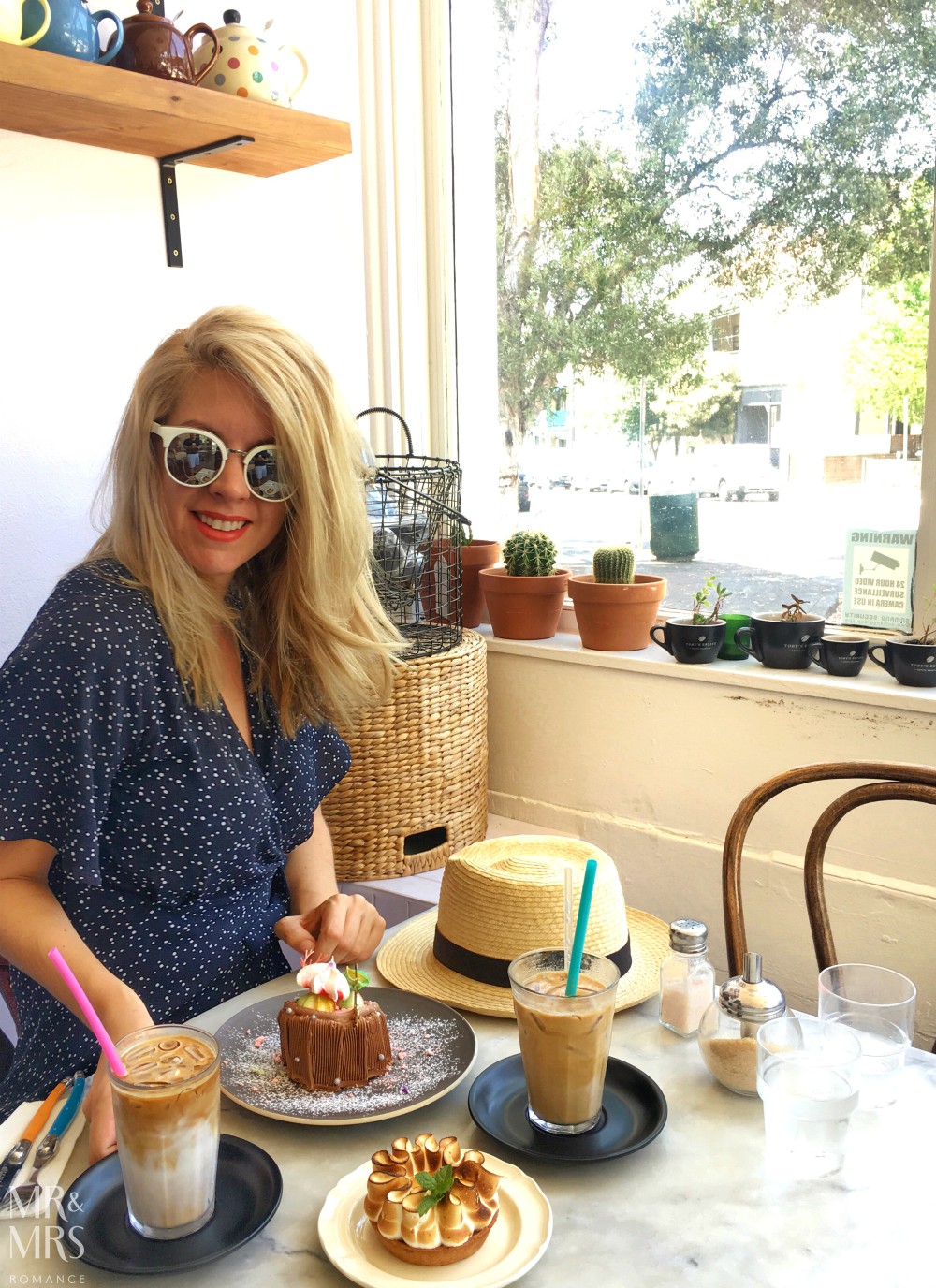 December 18th comes around and it’s a scorcher. Amidst the boiling heat of mid-morning, we run for cake and cover at Café d’Yvoire in Balmain.

The food and service here is amazing, the coffee’s on point (especially their iced lattes) and – most importantly of all – they make their own cakes here. And they’re pretty special. 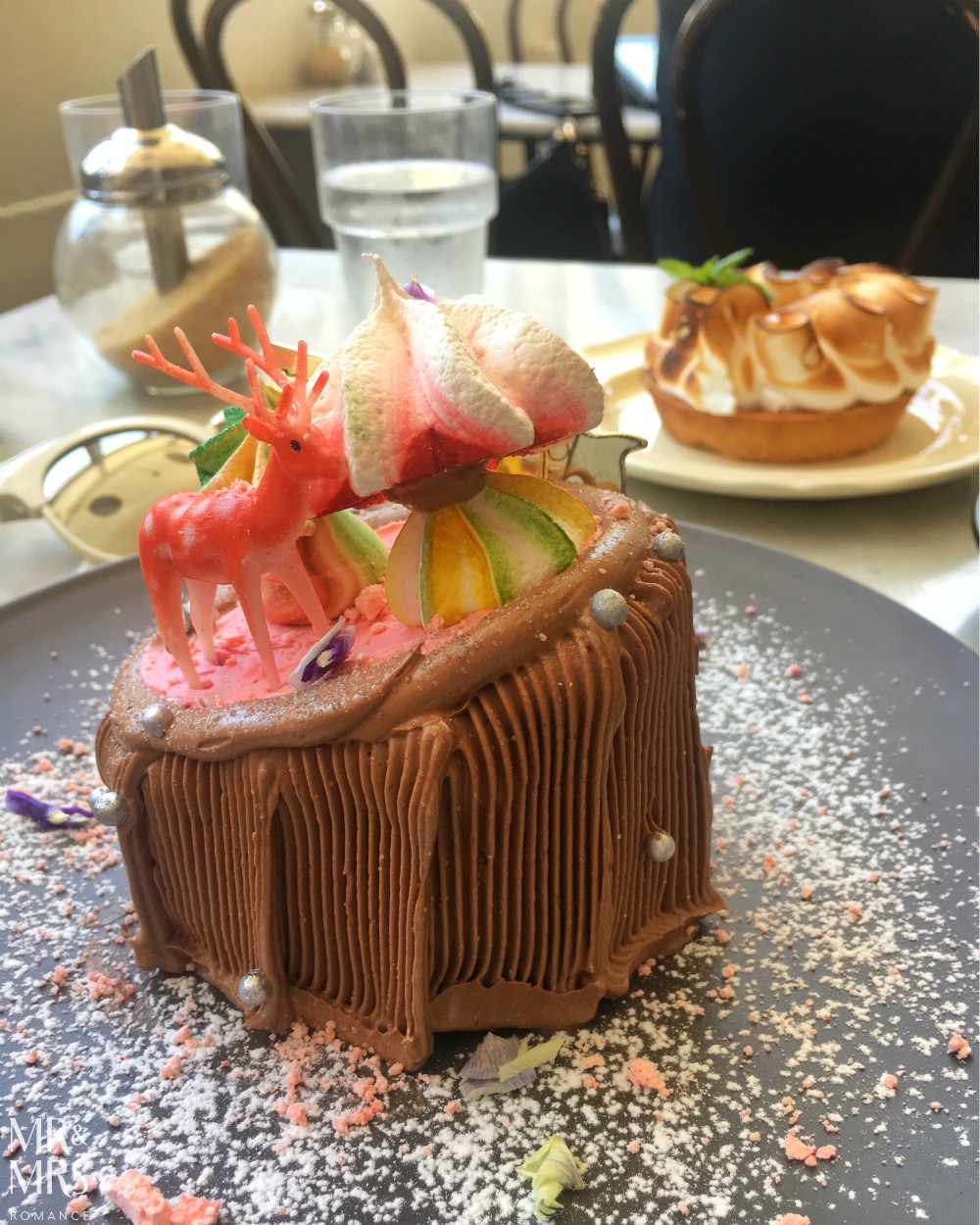 As it’s Christina’s birthday, she’s well within her rights to choose the most opulent and outrageous cake in the shop. This incredible chocolate mousse log with meringue trees, silver balls and a reindeer is perfect for the time of year. 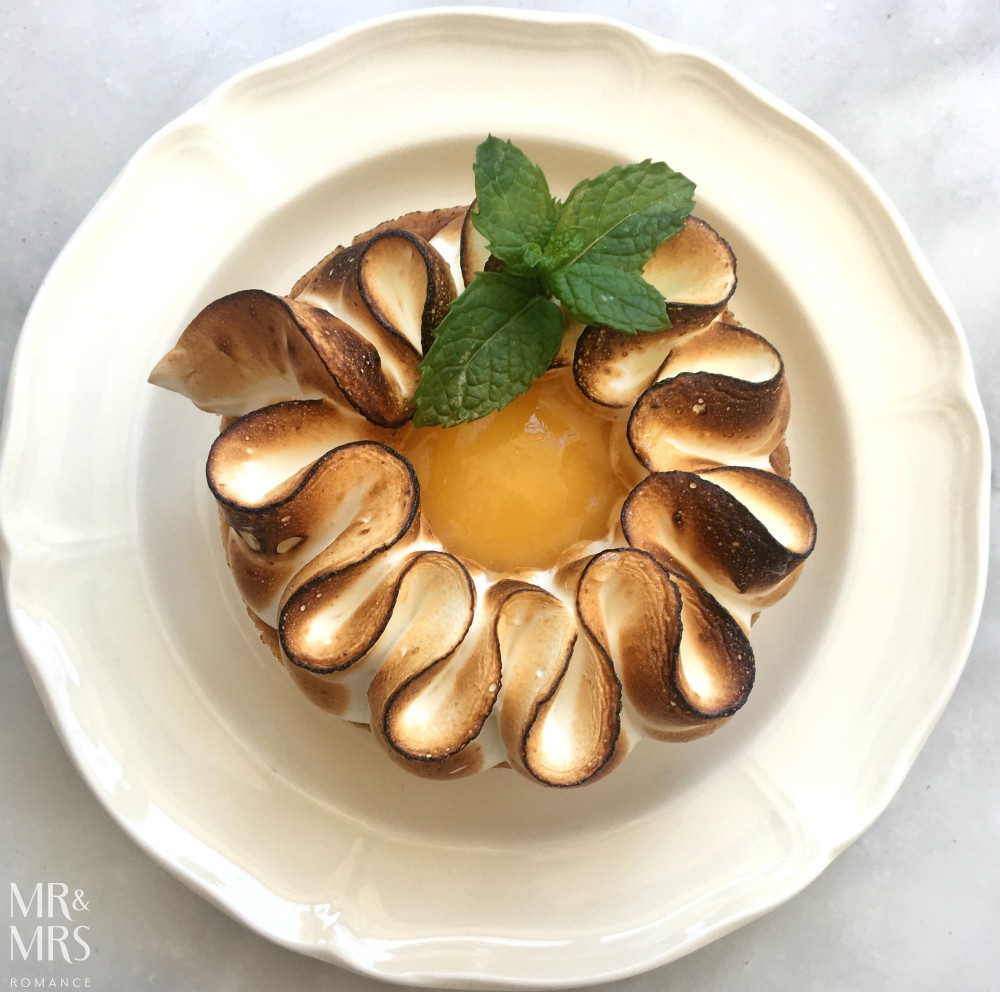 For me, this lemon meringue tart is all I could wish for. It almost feels like it’s my birthday we’re celebrating! 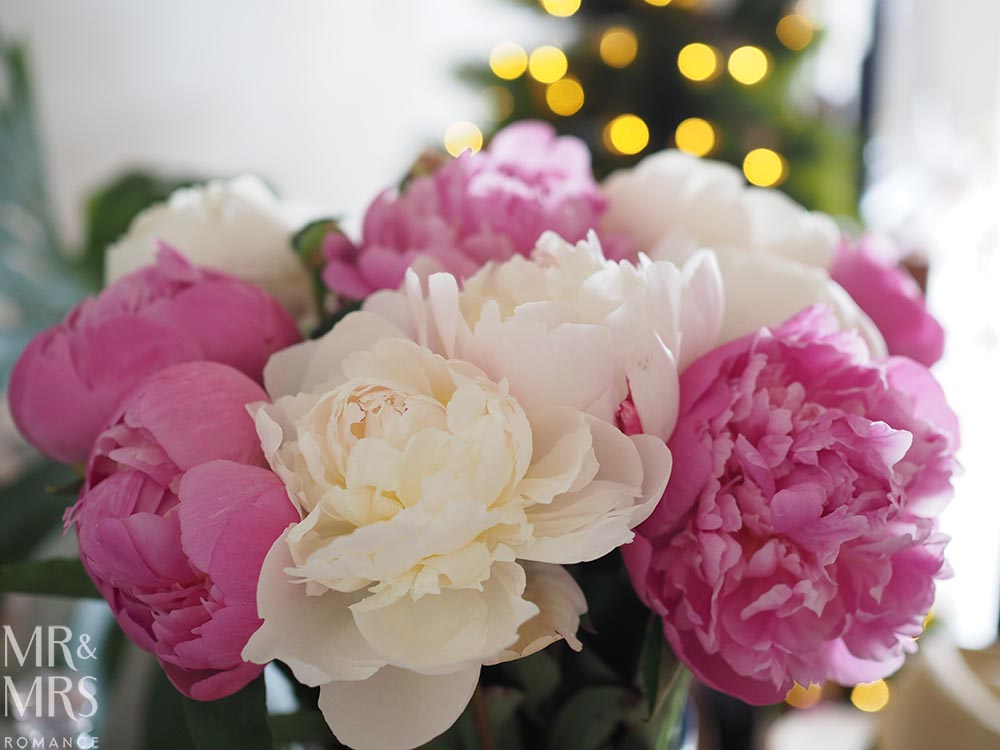 Lucky for Christina (and for me), her birthday falls almost perfectly into the Australian peony season. They’re the perfect present for her and I earn extra brownie points for finding pink ones and white ones. 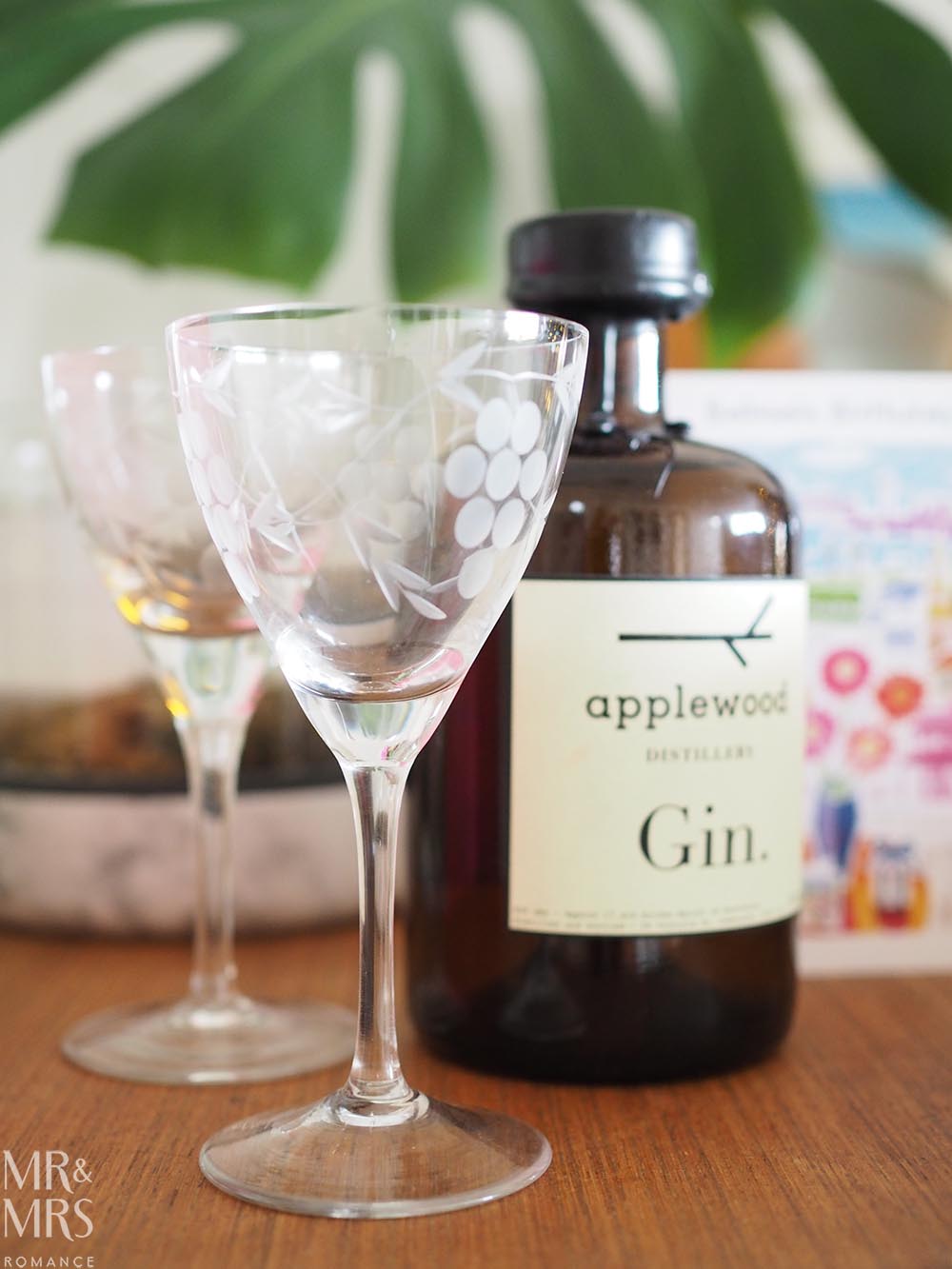 I also found these beautiful ‘50s cocktail glasses in a local antiques store, which I thought would make a great present for my martini queen. She seems really happy with them and with the bottle of Applewood gin I bought to go with the glasses.

Applewood’s an Australian distillery – Adelaide actually – and their gin is bright and citrusy with some good spice from the native botanicals, with a healthy dose of juniper of course. 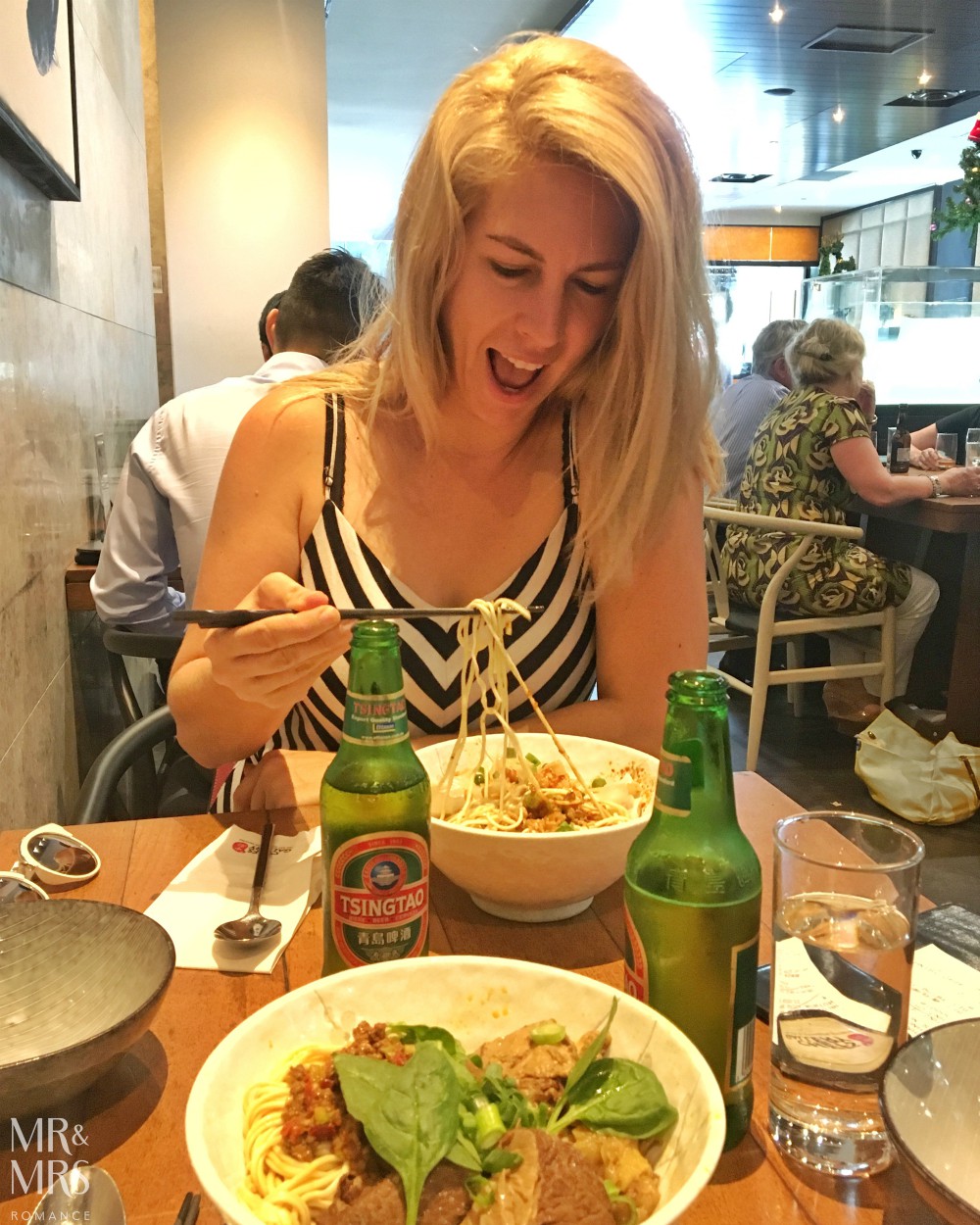 A bit later we wander around the city for a while until we settle on the Chef’s Gallery. Initially we have our eye on dumplings, but the selection here isn’t great and they’ve run out of prawn gow gee.

We turn our attention to what Chef’s Gallery is really good at: their noodles. You can actually watch these guys making fresh noodles in the kitchen, and the result is something else.

I have no idea what Christina’s eating – mostly because I’m really into my beef brisket noodles… though I don’t think either of us considered the weather and how full we’d be afterwards. 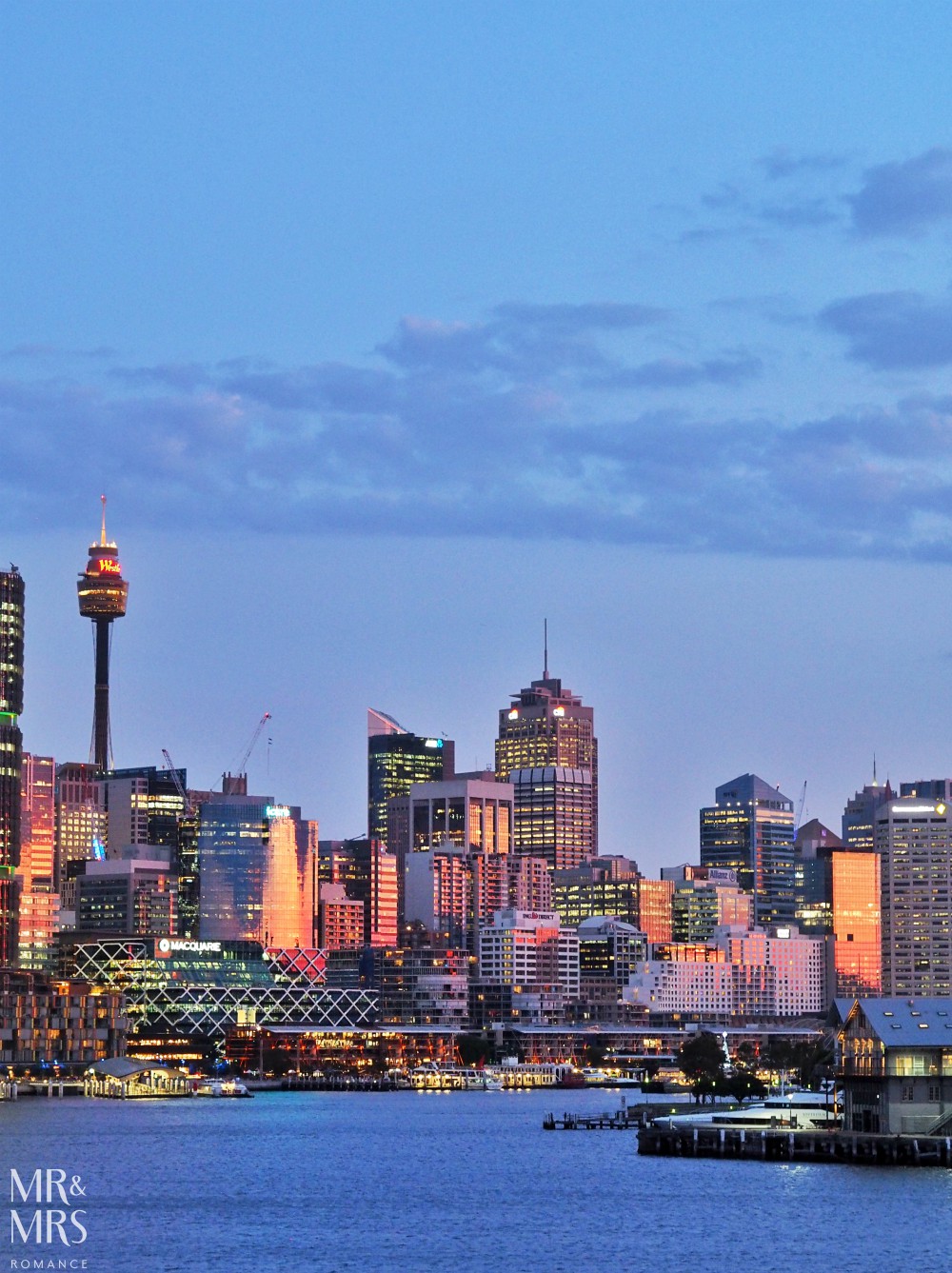 The day ends with a beautiful sunset over the city. 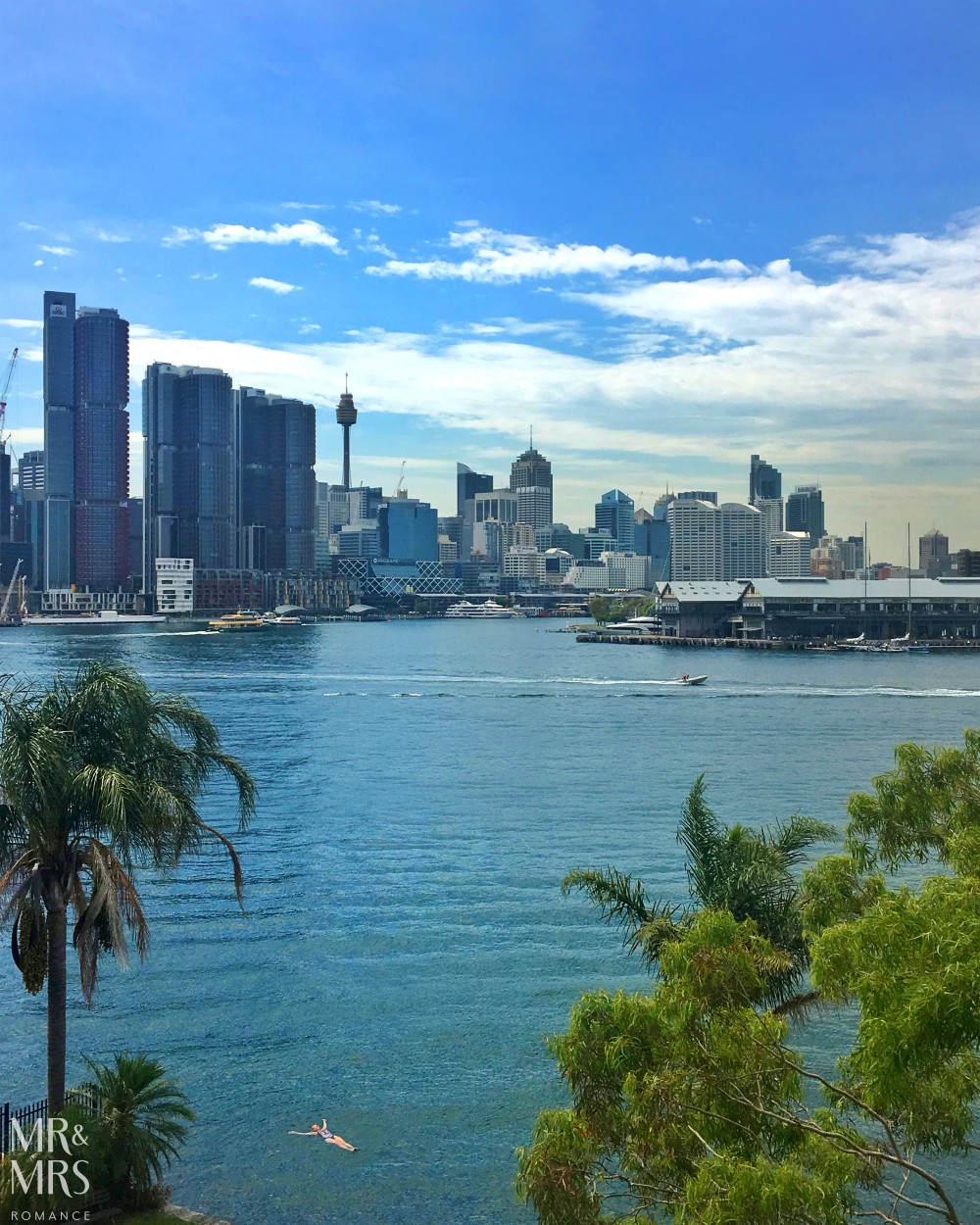 It’s another hot day here in Sydney and Christina starts it off with a swim. The only problem is our pool is already too warm, so she decides a dip in the harbour is a better idea.

While I’m on shark watch from our balcony, Mrs Romance relaxes in the cool lapping waters under the furrowed brow of the city. 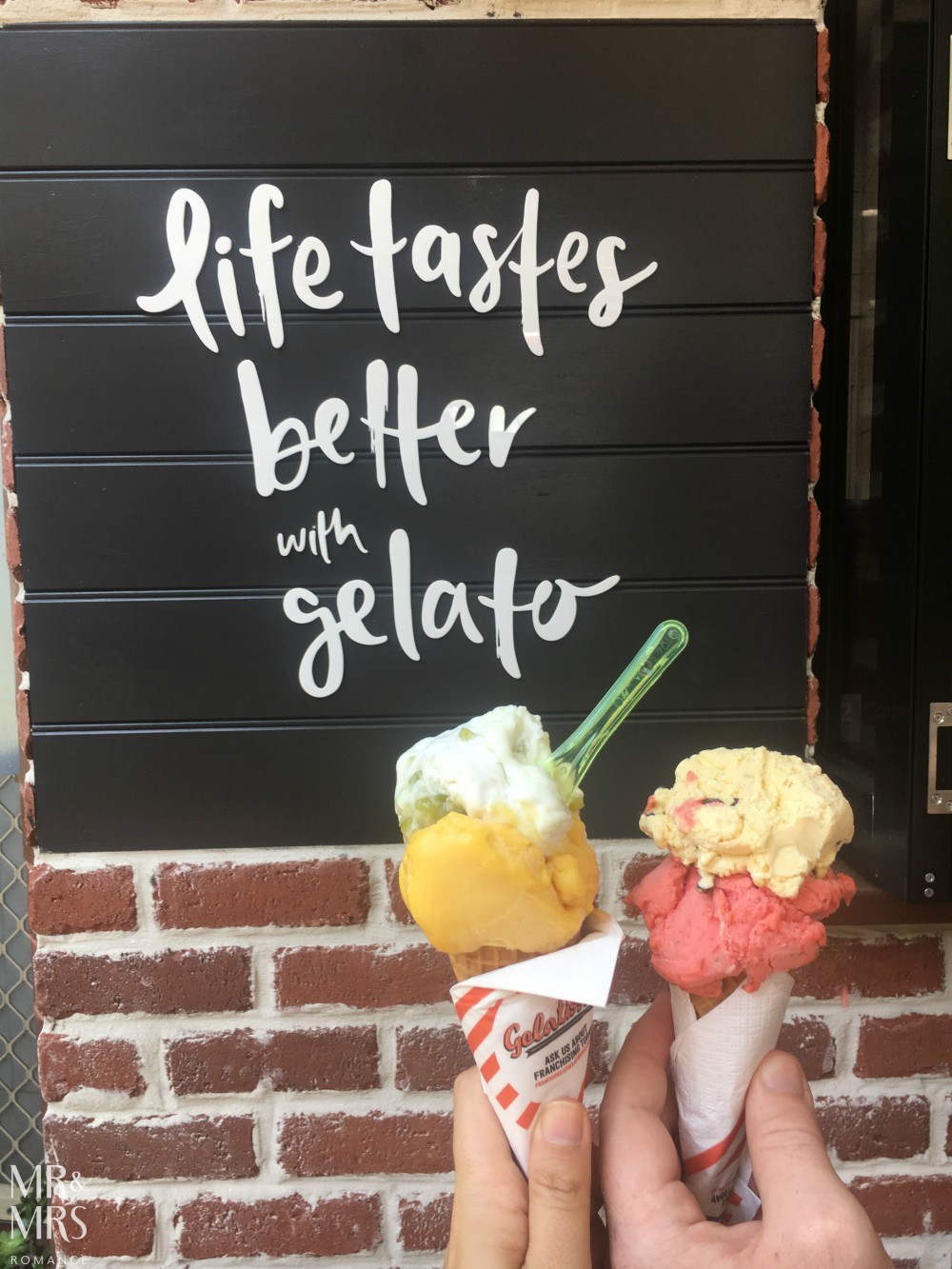 In spite of her swim, Christina is still too hot – and so am I. We trek out to Artarmon where our friends Pete and Rickie have opened their own ice cream shop.

No better way to beat a 370°C day than with a cone of delicious from Gelatissimo.

To get ready for the up and coming festivities and celebrations, we’ve decided to do a Facebook Live vid talking about some of the champagnes, proseccos and sparkling wines we love.

There’s something about cheers-ing with a glass of bubbly – so here are some recommendations and some geekoid facts on sparkles.

Click here if you can’t see the video. Sound quality is poor unfortunately, so we recommend headphones and plenty of volume. 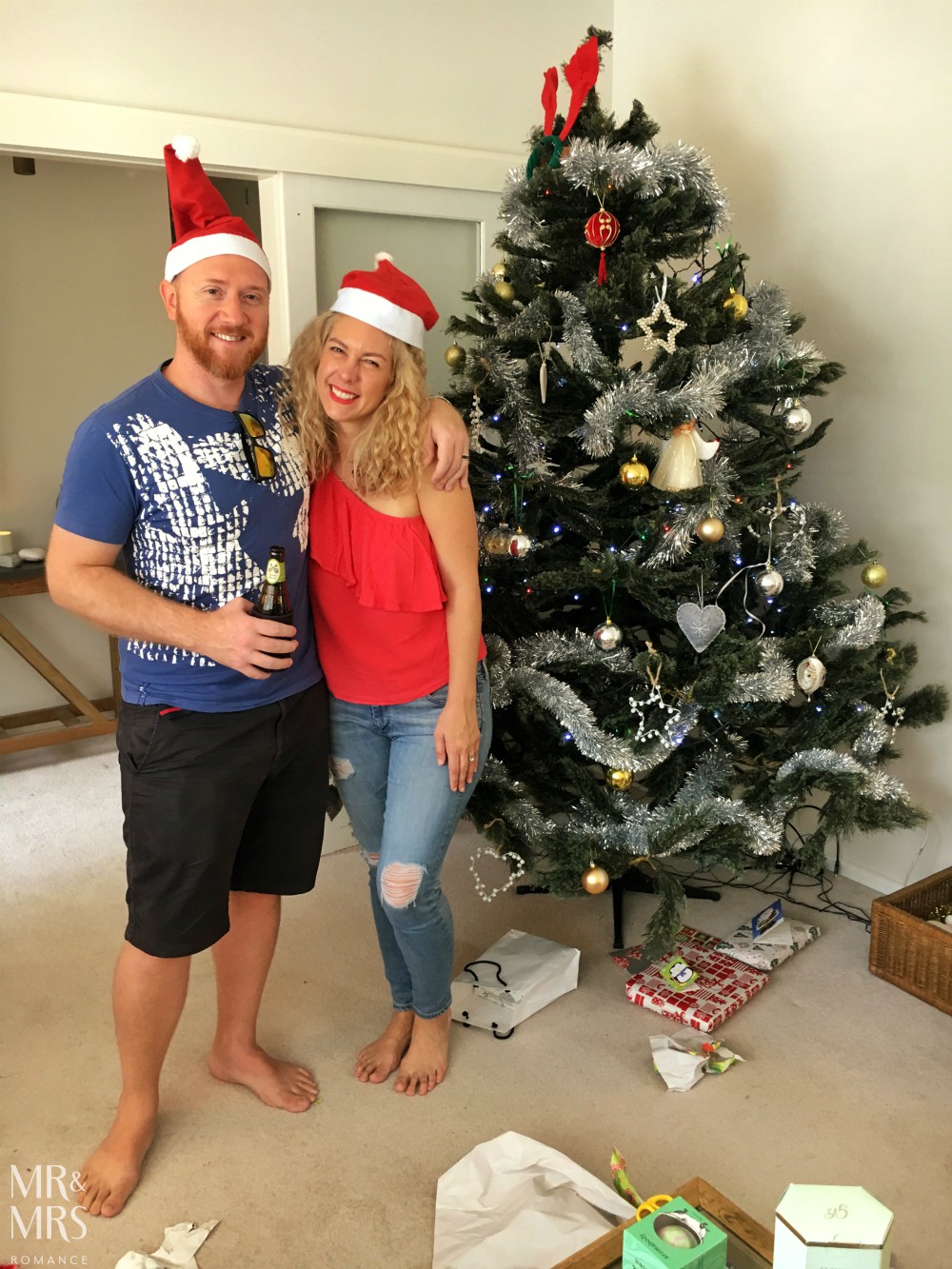 Next thing we know, Santa’s been and gone and we’re round Christina’s sister Mary’s place to celebrate Christmas Day.

Mary only recently bought this place, so according to the laws of the household, she gets to host Christmas this year. I didn’t know about this rule, but apparently it’s a thing! 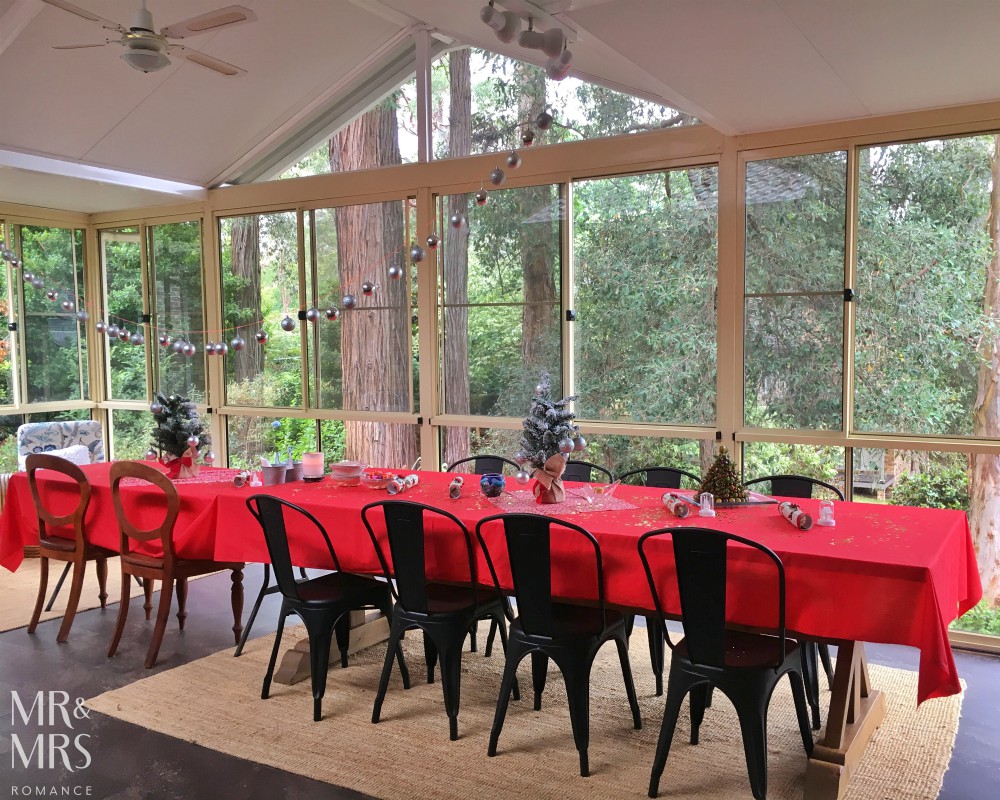 Presents all opened and just before we delve into the feasting, Christina grabs a quick shot of the beautiful setting for Christmas lunch. It’s a stunning outlook – I half expect to see an Ewok swing past. 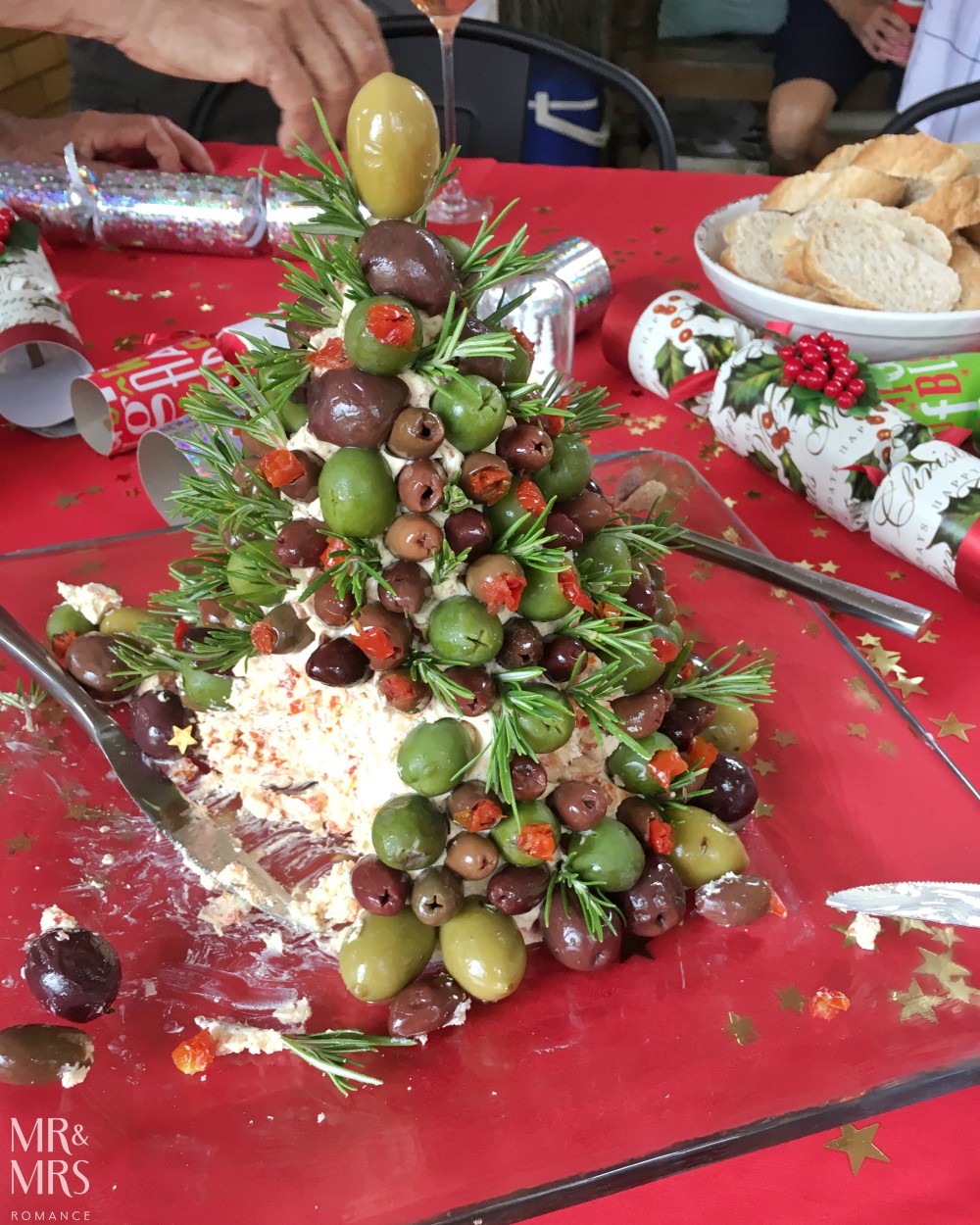 To get the ball rolling, Christina presents our offerings for the table: an olive tree dip!

We’re almost as impressed that it turned out so well as people are with how it looks and tastes. I’ve no doubt we’ll be sharing the recipe for this soon, so keep your eye out. It’s a real crowd-pleaser. 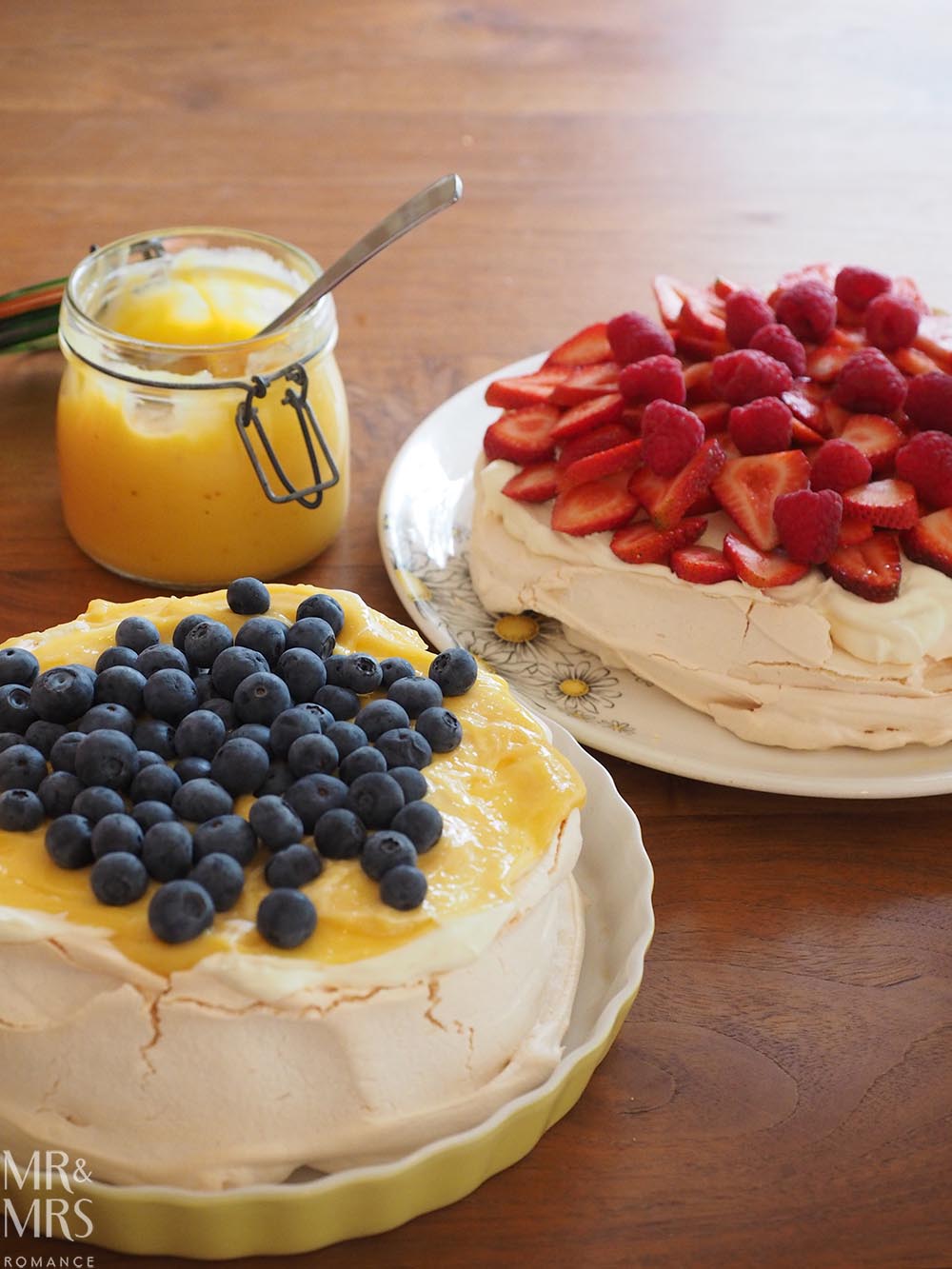 It’s really not an Aussie party unless you have a pavlova on the table. It’s looking like a real shindig this Christmas though: we’ve got 2!

Christina’s mum knocks up a great classic pav with strawberries and passionfruit, but this clearly wasn’t enough for Chris. Her pavlova (on the left) features blueberries and homemade lemon curd!

I don’t know what’s come over her – previously little interest in the kitchen has suddenly turned into a towering cheese tree and world-beating pavlova.

Watch this space for the recipe for the lemon curd by the way. It’s magnificent. 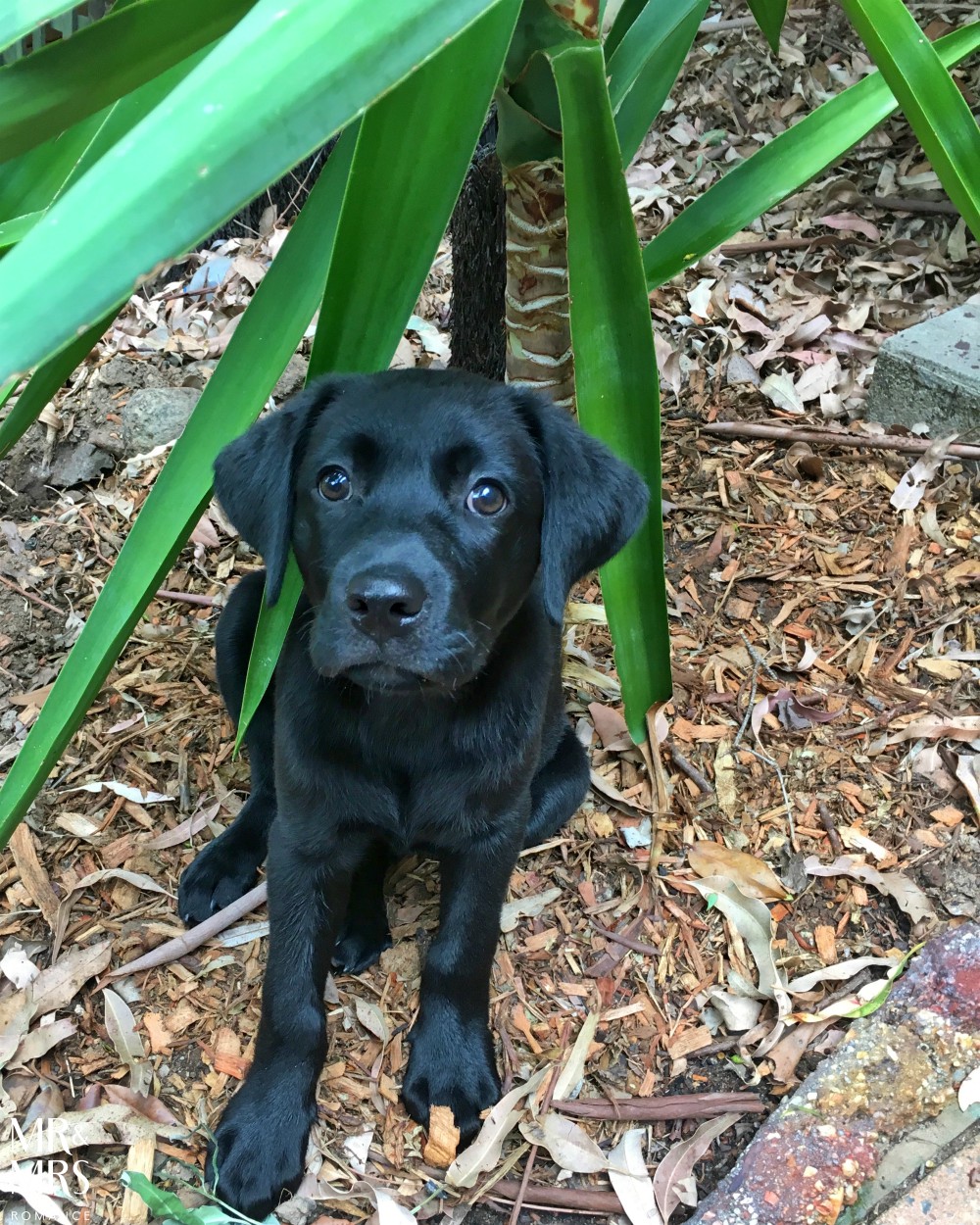 Our nephew’s new dog Raven is still bringing us a huge amount of pleasure. She’s such a cute puppy with a lovely nature too. A family friend has also got a Labrador puppy that sounds like a total nightmare, so I think Mary’s done well with this one. 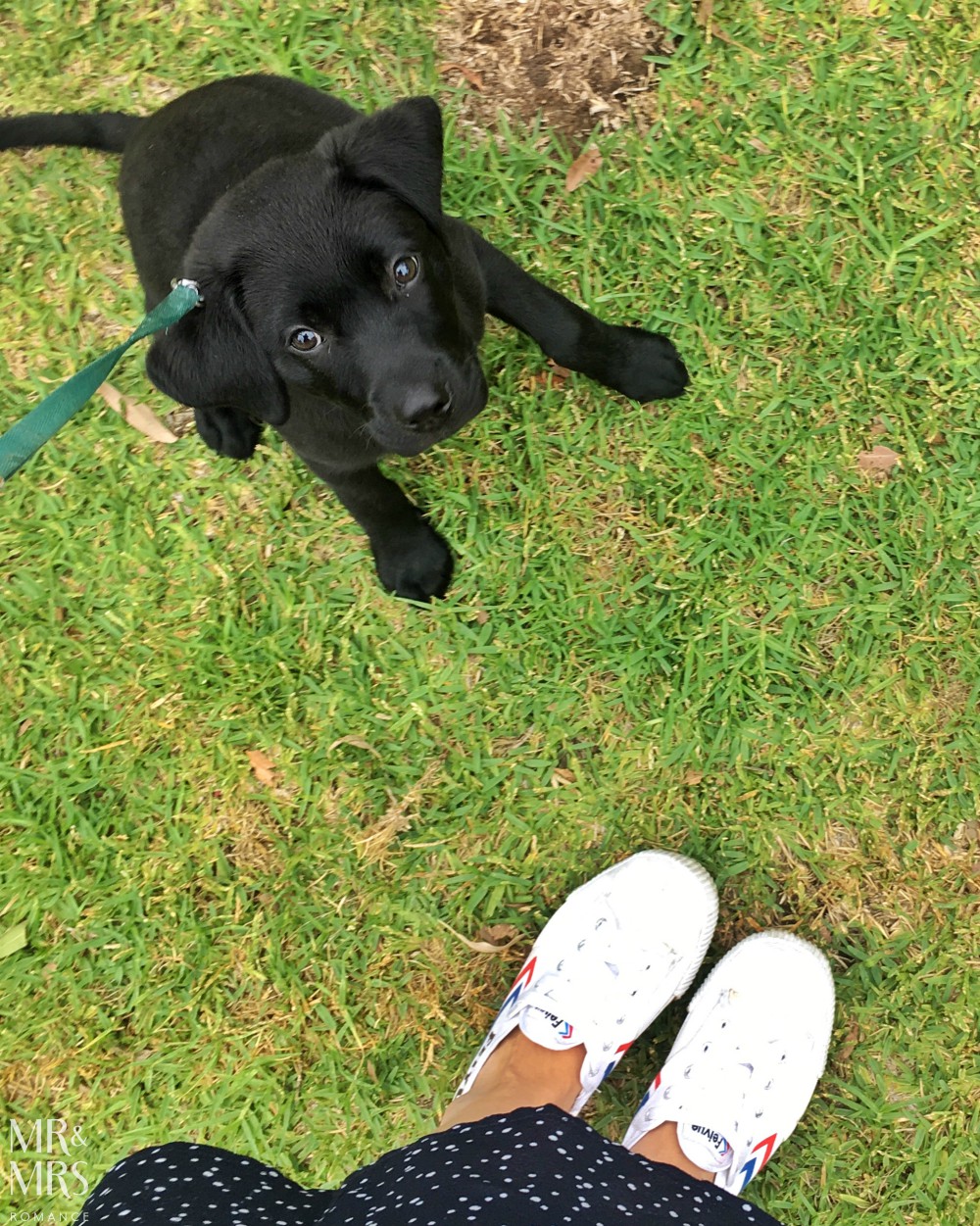 The traditional post-Christmas-feast walk is much cuter but also much slower this year. Raven isn’t quite big enough to walk far yet, and she’s also very interested in everything! 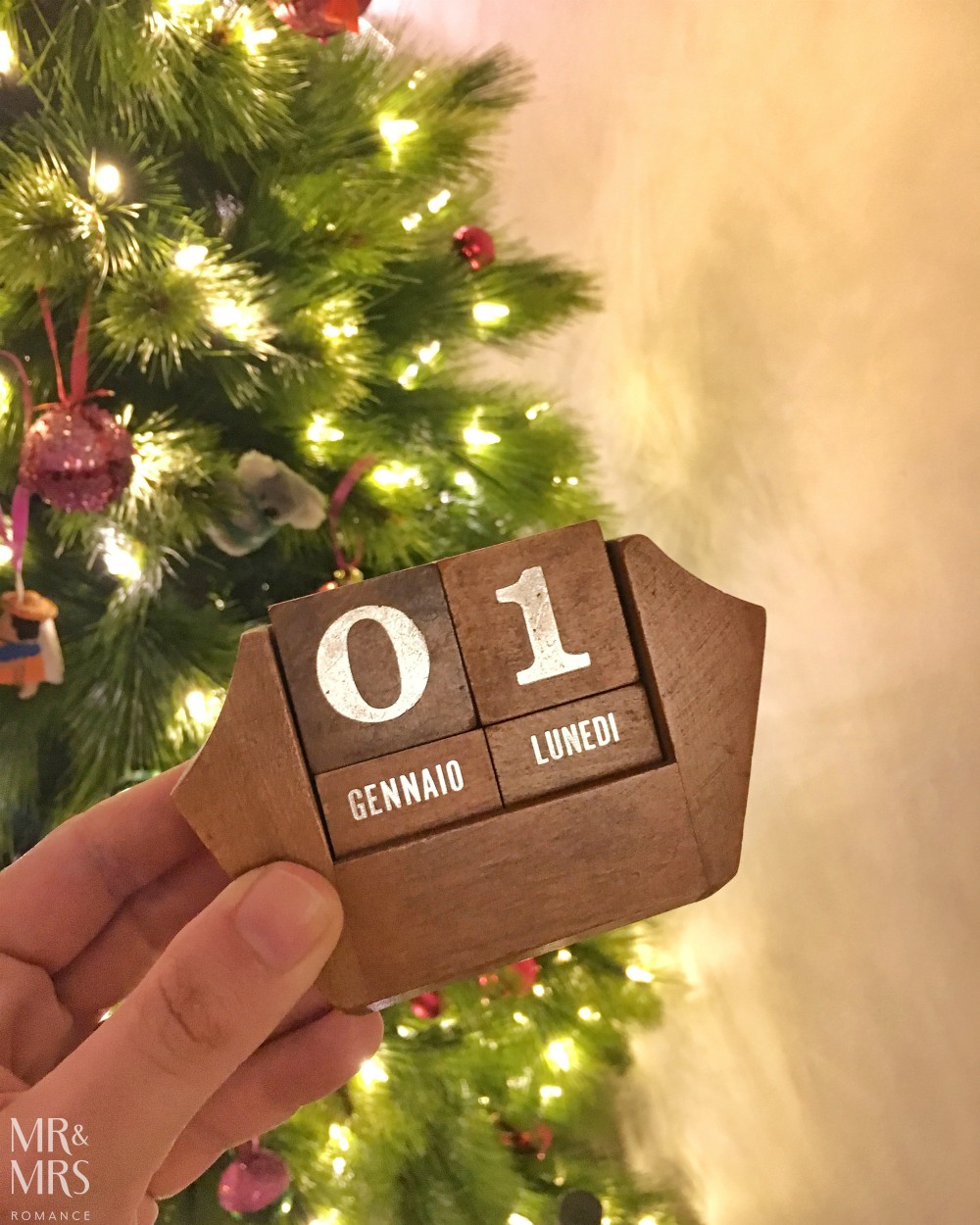 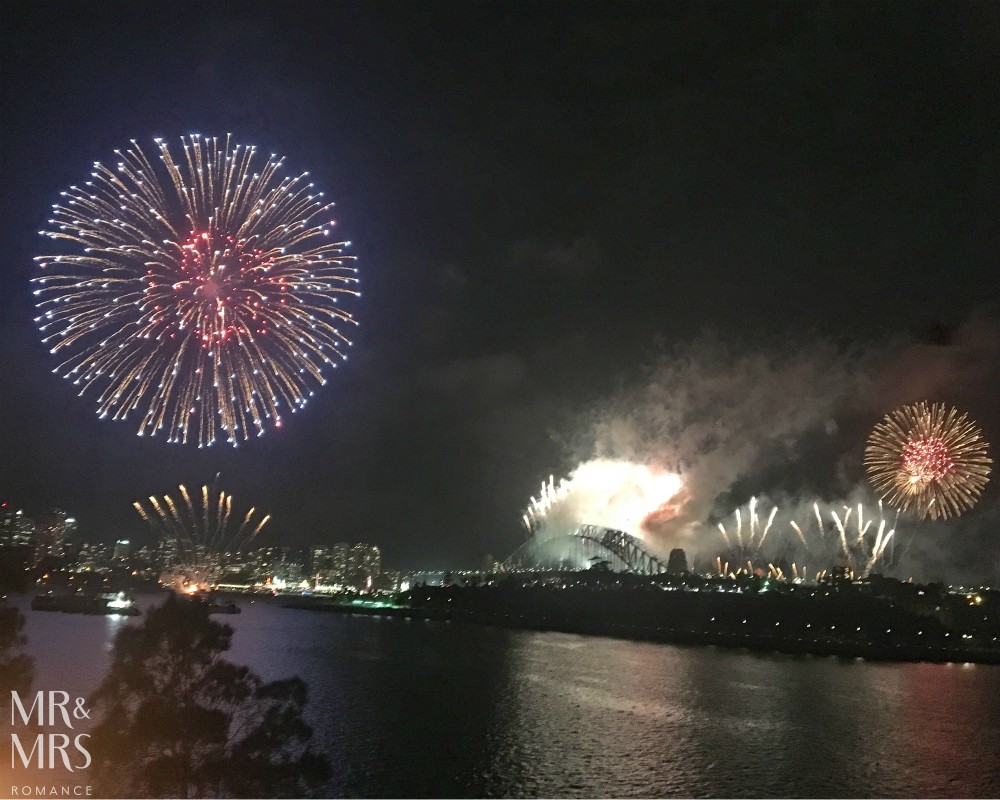 The fireworks this year are amazing – though we’re missing most of them thanks to a strong easterly wind. The smoke is so thick that by the end of the display, the city and the Harbour Bridge is completely obscured, and people are left blinking bits of ash and firework out of their eyes.

As long as it doesn’t go in my champagne though, I don’t mind! 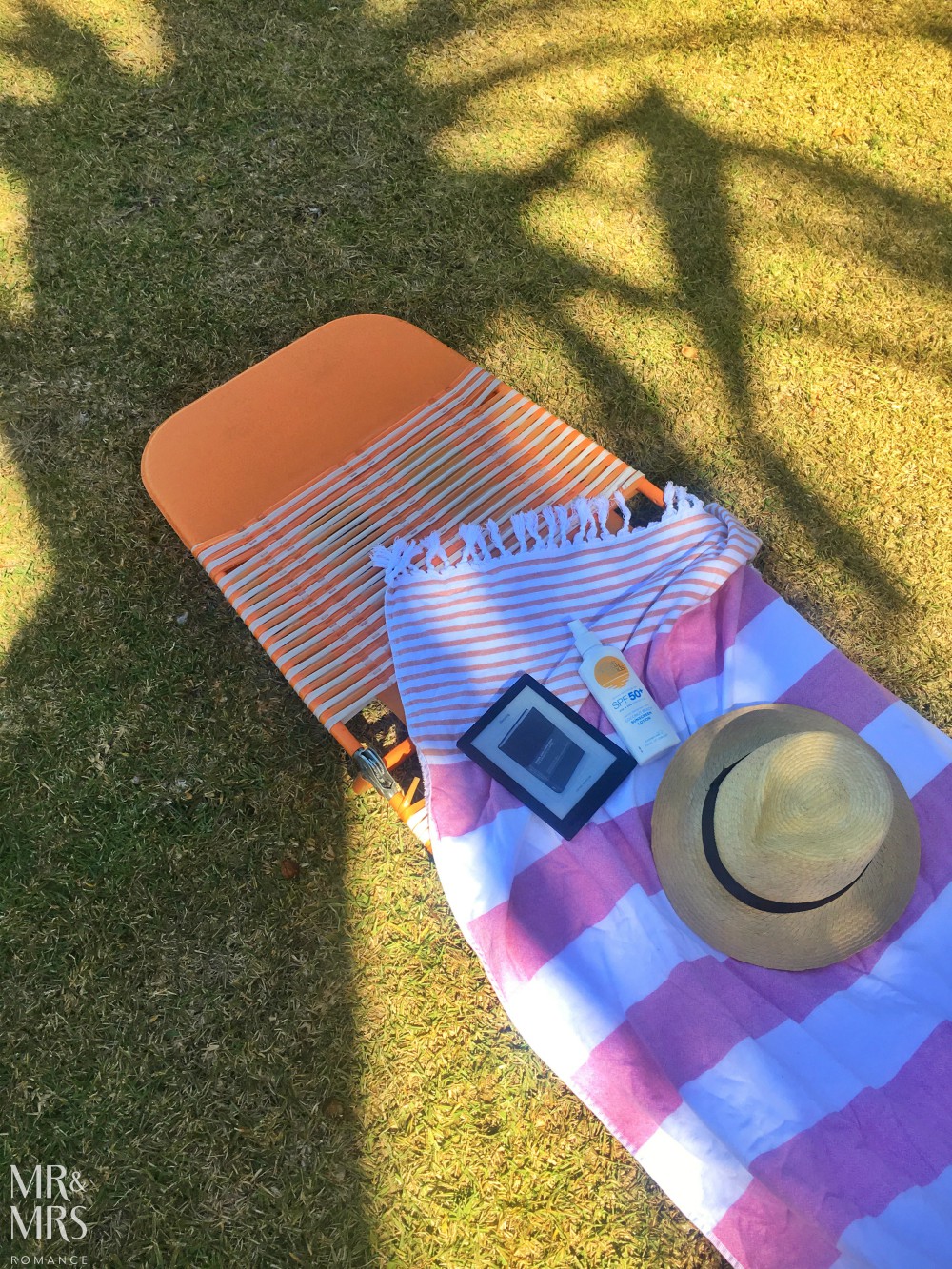 2018 starts hot and peaceful here. We’ve decided to take getting back into things slowly, so there’s been a lot of reading, napping and the occasional walk.

Christina is really making the most of it. She and her Kobo have become firm friends this summer, and this new sun cream we’ve found smells so much like a piña colada it makes you thirsty! 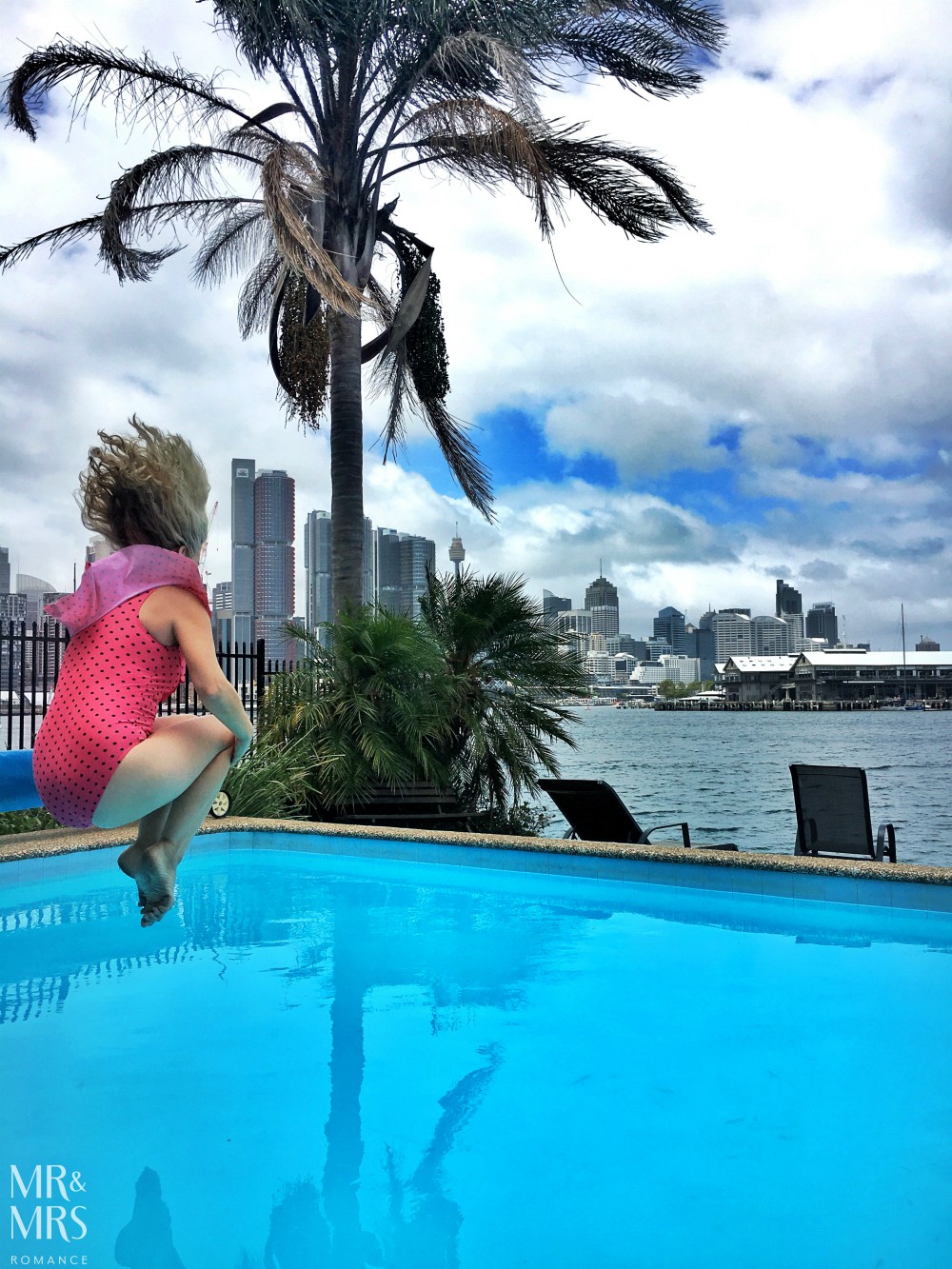 But the shade of a palm tree, a Cuban hat and a coating of 50+ can only get you so far.

It’s not long before Christina is taking the plunge.

Great form by the way. 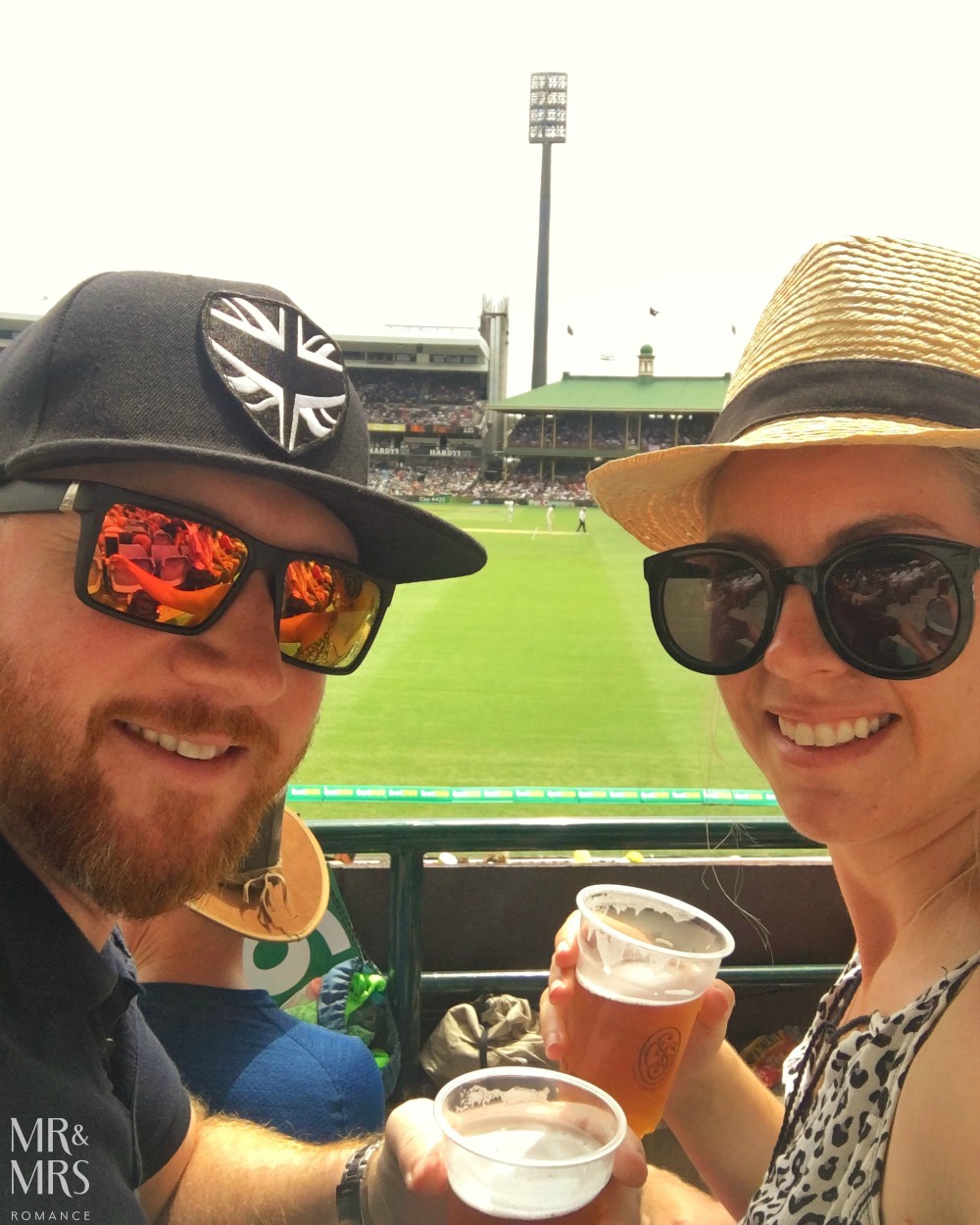 It’s not been a fun Ashes series for England and it’s been tough for me to go outside, but when our friend Paul invites us to the first day of the Sydney test, we jump at the chance.

The rain and clouds clear up just before midday when we arrive. Sadly the England batsmen’s timing isn’t quite as good as ours. I think they’d have been happier if it had kept raining. 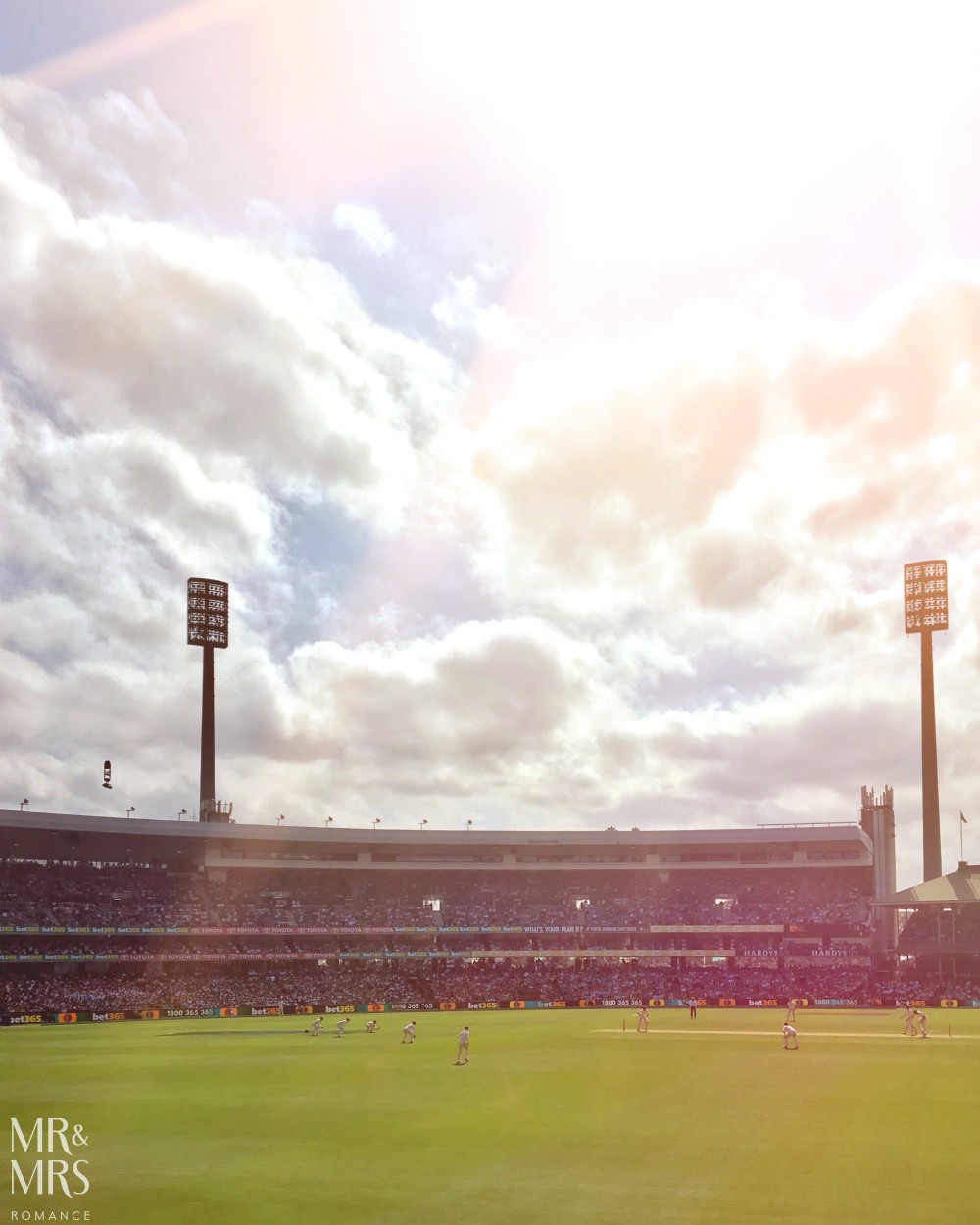 As the sun climbs in the sky so do the temperatures. It’s a scorcher. It’s hard enough sitting in the stands with the sun on you, let alone playing sport.

Come Day 4 of the test, the mercury pop the 40 mark; it’s times like that when you’re happy not to be a professional sportsperson!

We hope you’ve enjoyed this catch-up and that your 2018 has begun well too.

How to get to Pompeii from Amalfi without a car

It might seem like too much trouble to get to Pompeii when you’re on the Amalfi Coast, but if you know how, it’s easy…