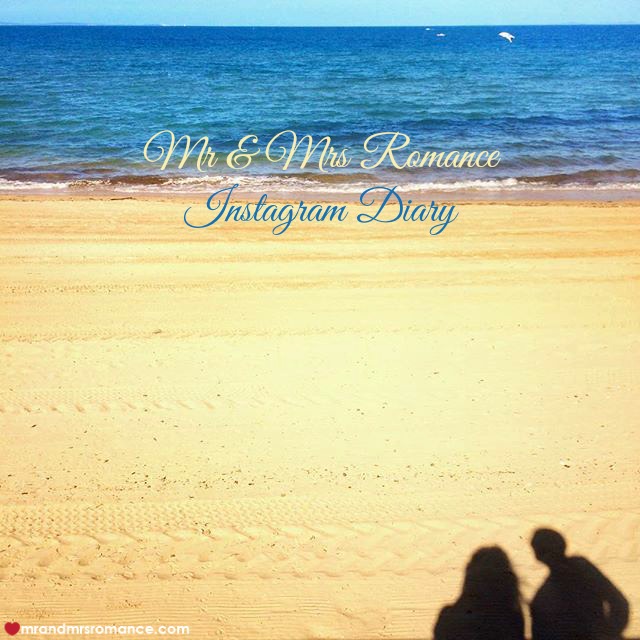 What a week! The sun’s been out a lot more, which spells the beginning of summer proper, but then so have the storms. And if you’re like us, you’ll love the photos we’ve got of the lightning over Sydney this week just gone.

I’ve also been taking advantage of Sydney’s beer fest and we’ve headed west to check out a great new eatery!

Here’s our life through Instagram with this week’s Insta Diary. 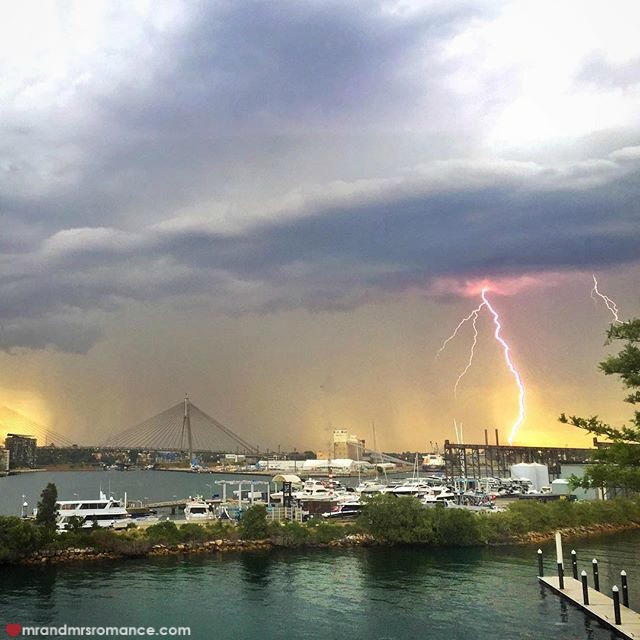 The storm that’s finally broken over Sydney this evening is pretty intense. I’m in the city with my friend Anton – in a great little bar called Peekaboo you should check out. However, Mrs Romance is by the water and has managed to snap this amazing photo of an enormous lightning bolt with her iPhone.

There are literally hundreds of photos she has from this storm to choose from, but I think these two are the best. 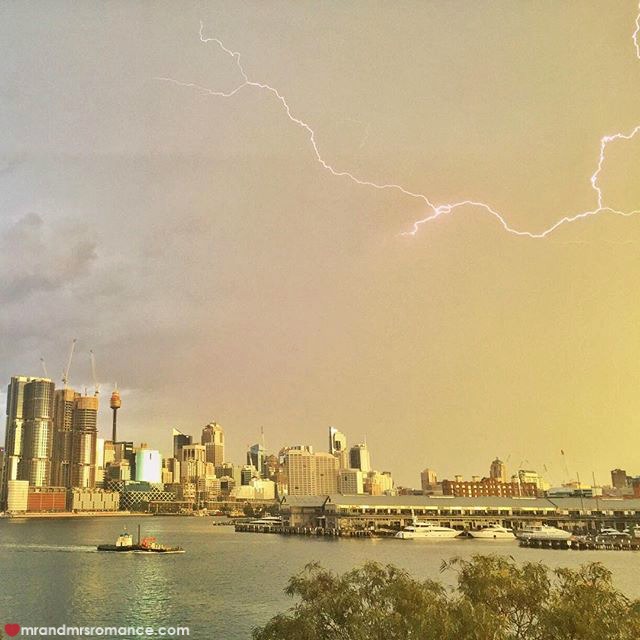 If you want to know how Mrs R took these shots just with her mobile, check out our post on how to take photos of lightning with your iPhone. 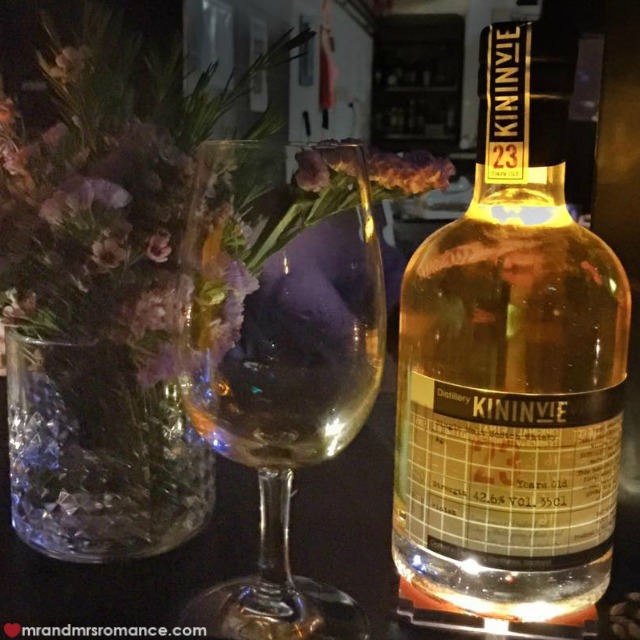 While the storm crashes overhead, my friend Anton and I are ensconced in the curious and very cool basement bar called Magazin. It’s almost impossible to find with no signage other than the small plaque with the licensees’ details. The door – a big silver-grey job – looks more like a service entrance than the way into one of Sydney’s most secretive bars.

The owner Martin O’Sullivan has a penchant for secret bars. Another of his – Grasshopper – is better known but still tricky to find.

Tonight though, we’re here to try the latest release from Kininvie Distillery. This scotch whisky, which is part of the William Grant line, is quite something. The 4 vintages we try are amazing and if you’re in the market for a new dram, keep your eye out for this stuff. A beautifully made and very approachable scotch. 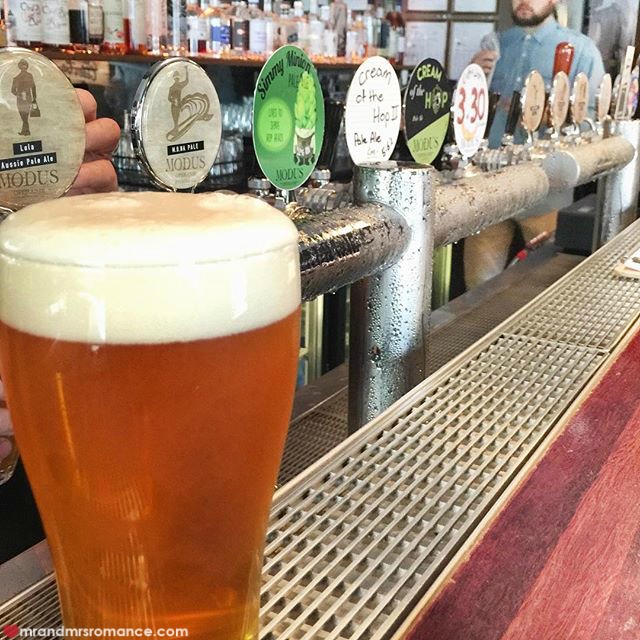 Fast forward a couple of days and we’re in the midst of Sydney Craft Beer Week! My mate Anton and I are down the pub tonight sampling some of the amazing brews to come out of Aussie breweries.

We’re in my old favourite the Royal Albert in Surry Hills trying the great things by Mona Vale based brewers Modus Operandi. Some excellent whistle-wetters here. 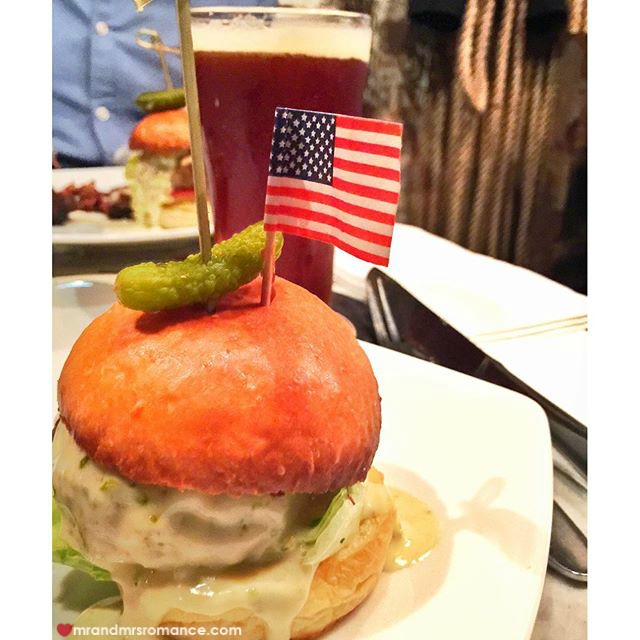 After quite a few in the Royal Albert, we’ve moved to the other side of the suburb to The Blacksmith – a very cool cafe by day and licensed premises by night. Here – in celebration of Sydney Craft Beer Week – they’ve coupled with the remarkable Two Birds Brewing Co to run a beer and food pairing degustation experience.

The brews are amazing, as is the food, but to be able to meet the two ladies behind the beers is a real honour. Two Birds is the first Australian female-owned brewery, and they’ve definitely got what it takes.

The beers they’ve match up with the food is very clever too. Not only is this a degustation, it’s a trip round the world with 4 courses based on different iconic beer destinations. You’re looking at the American course obviously. There’s also a Mexican course, an English course and an Australian course… of course.

They’ve even gone as far to create Spotify music playlists relevant to each dish and beer served. Amazing attention to detail. 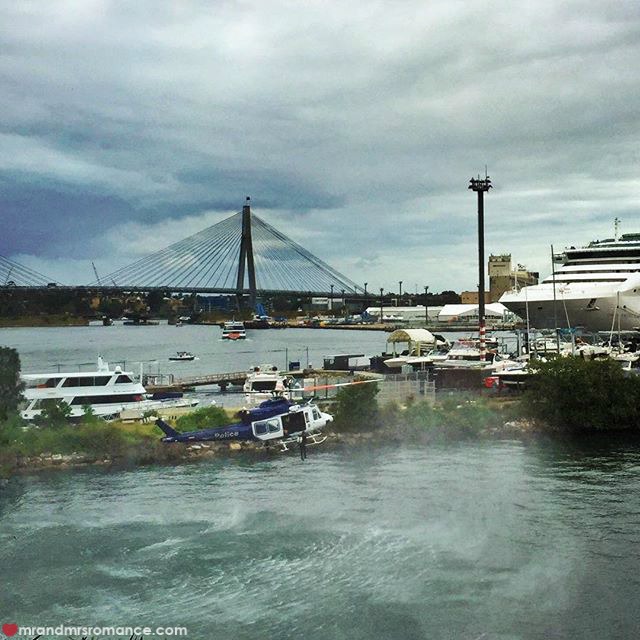 We’re both busy working today when I look up to see this police helicopter fly by our office window. Mrs Romance, who has the amazing ability to shut noise out, has done exactly that and I have to nudge her to get her attention.

It’s quite a spectacle seeing a helicopter so close to the surface of the water. And then to see divers jump off the side into the sea – very exciting! 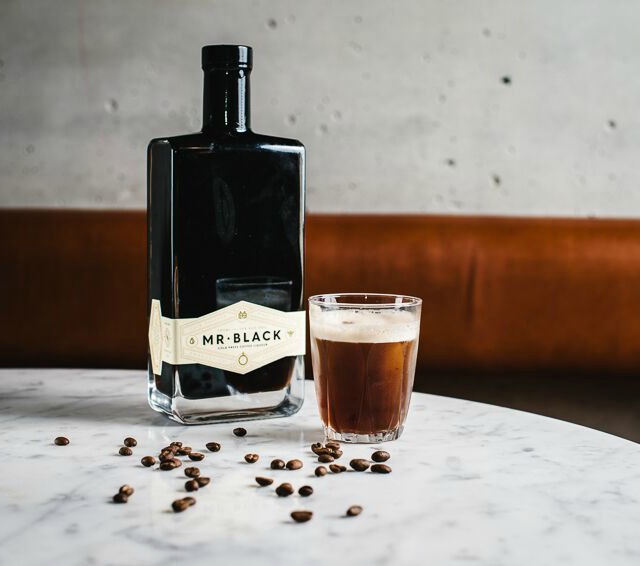 (Image courtesy of The Sound Campaign)

Tonight, Mrs Romance and I pop our heads round the door of Three Williams cafe to help Tom Baker and co of delicious Mr Black coffee liqueur fame celebrate their 2nd birthday!

We really love what Mr Black is about and even better what it tastes like! Definitely one for your cocktail cabinet if you haven’t already got some.

Here are some drinks we’ve made with Mr Black in the past: 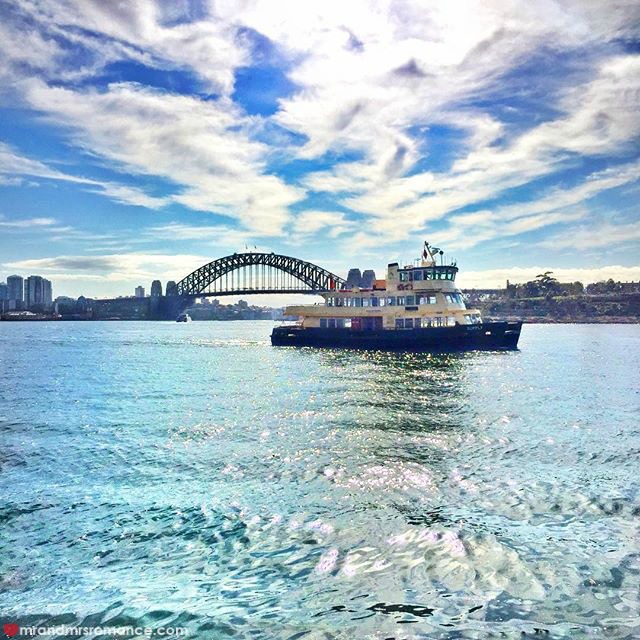 It’s a beautiful day today in Sydney. We’ve gone for a quick walk along the harbour foreshore before we head west to see family. We’re pretty spoiled, living here I must say. 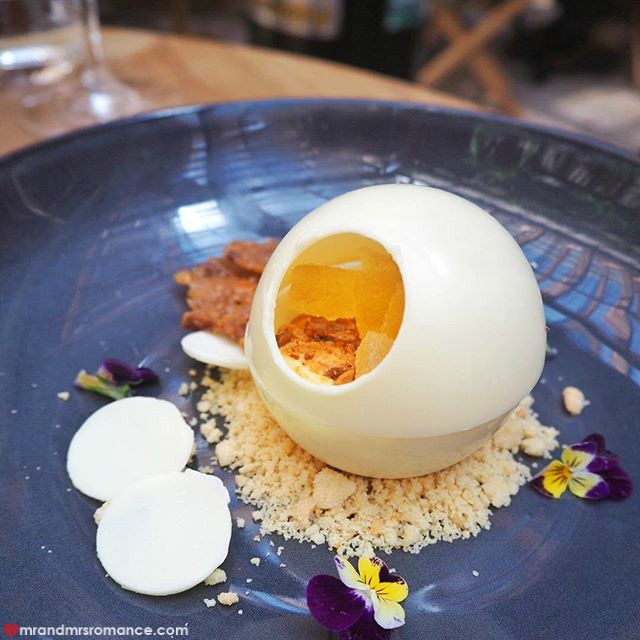 We’re in Parramatta for lunch today. We’ve come to see the menu at The Emporium. It’s a very cool venue right in the heart of Parramatta’s burgeoning restaurant and bar scene. The outside has a European piazza feel, with takeaway bakery and coffee options. Inside follows but with a more polished finish.

As for the menu, well we’ll definitely be coming back here. This white choc sphere dessert is a great finishing touch to some intelligently planned main dishes that focus on combining flavours, colours and textures as you eat. 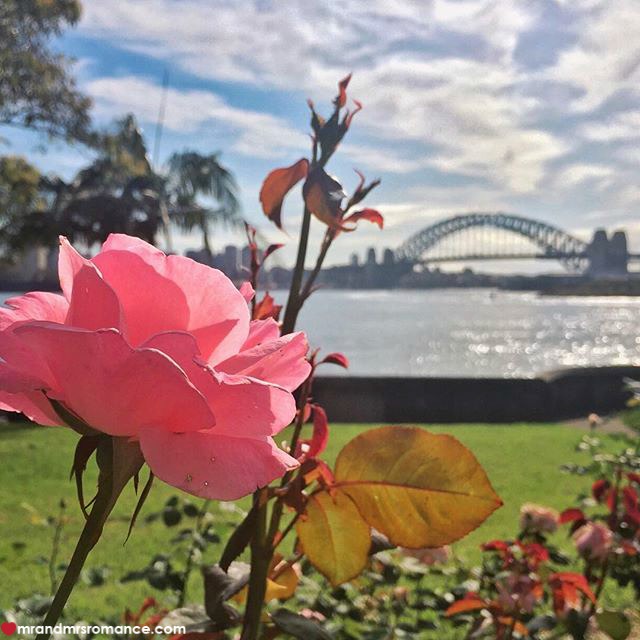 Back in the city, we get our minds in order ready to face the week ahead. Some people hate Sundays and get very depressed about the coming Monday. Thankfully I don’t have the memory span for that to happen. I quickly forget what’s coming up and just think about how I’ve got this whole day off to relax! 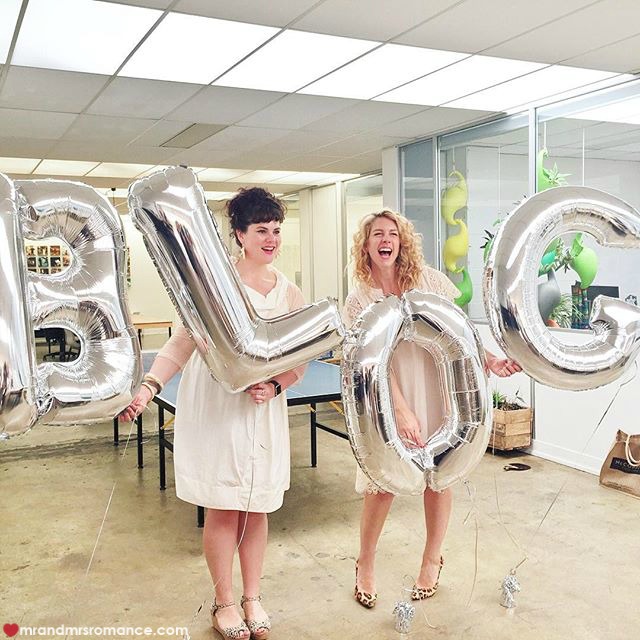 This coming week’s going to be busy though. We’ll be focussing on getting ready for Mrs Romance and Smaggle’s latest Little Blog Big session – this time in Brisbane! Hope you’re ready, Queensland. We’ll see you on 7th November!

If you haven’t got your tickets for the Brisbane session, make sure you click here for more details.

If you’re in Canberra or Sydney, we’ve got good news for you. We’ll be in the ACT on 14th Nov and back in NSW for 28th. Make sure you take advantage of those early bird specials!

How was your weekend? Did you get a storm? Have you had any new brews you think we should know about? Tell us in the comments!

And we’re off! Mr and Mrs Romance are in America on an incredible tour that will take us from the west coast of California…