We all have those go-to shows we watch when we want to fill a spare half an hour or so. It’s those TV classics you’ve seen a hundred times before that you find yourself going back to and watching when there’s nothing else on and you need your fix. 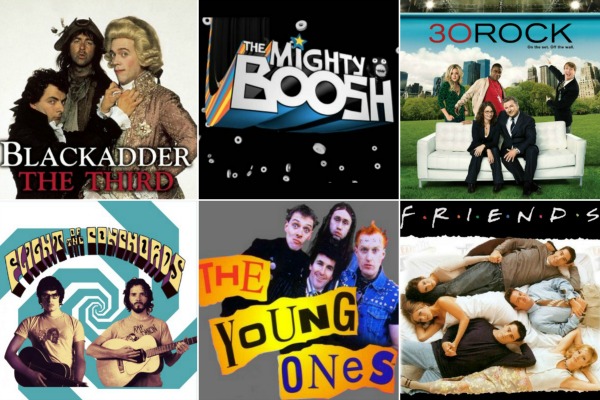 I always measure my TV guilty pleasure by what I end up watching when I come home late from the pub. When all I want is to slump in front of the telly, not think about anything and just be entertained.

I most often go for the funny shows, though Mrs Romance tends to lean towards more drama-packed programmes.

Here are the shows we both love and rely on when we don’t really want to talk to each other for a while. Funny enough, the following series also all feature in our day-to-day conversations; we quote them, refer to them and have fun identifying when our lives show even the tiniest similarity to them.

We can’t recommend these shows enough – purely for their entertainment value. 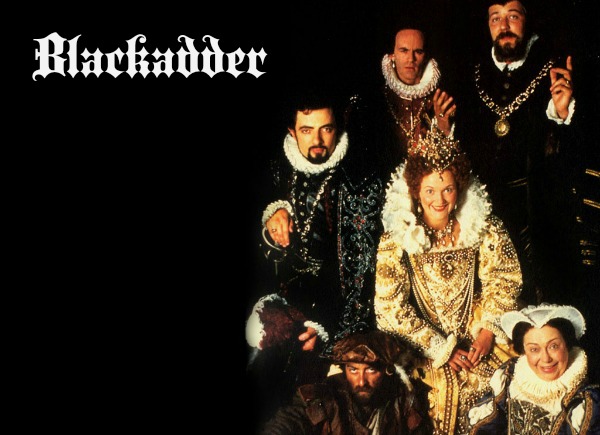 This Rowan Atkinson classic is our favourite show to put on if we’re both in the kitchen. The scripts are so well-written you don’t need to see the show to appreciate it. Especially when you’ve seen it as many times as we have!

Our favourite is Blackadder the Third – mostly because Hugh Laurie, who plays the Prince Regent, is so brilliant. He’s the furthest cry from House here than he’s ever been! If you haven’t seen Blackadder before, go buy it immediately. It’s awesome!

Another British comedy, this one’s so far off the wall it’s just a faint speck on the horizon. Starring Noel Fielding and Julian Barratt, the three series of The Boosh begin in a weird zoo called the Zooniverse, where they visit monkey hell, explore the Arctic and fight Jack Frost with some slap base and have a boxing match with a killer kangaroo.

It’s mad, hilarious and perfect when you’ve had a few. Mrs Romance got me the box set for Christmas as few years ago. We watched the whole lot with my mate Anton on New Year’s Day with huge hangovers and the air-con pumping. Perfect!

Tina Fey is at her very best in this awesome sit-com series based on the writers, actors and staff of a live TV show. It’s funny, weird and the characters are so cleverly scripted. Fey’s boss Jack Donaghy, an unscrupulous power-mad business genius, is played by the surprisingly good Alec Baldwin.

It takes a few episodes to get into this show (and we recommend going from the first season) but it’s well worth the commitment.

Flight of the Conchords 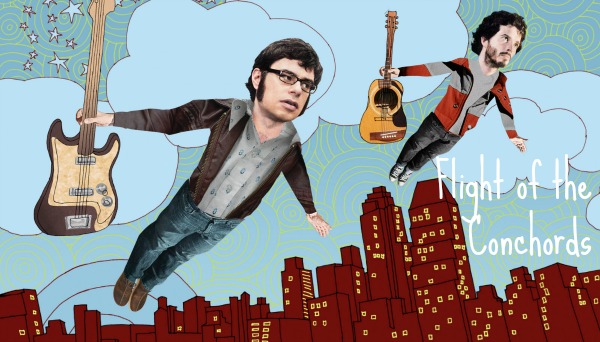 This brilliant comedy out of New Zealand follows the life and non-starting music career of two feckless but talented singer-songwriters and their naïve band manager – who is also deputy cultural attaché to the NZ Consulate.

The show’s brilliant, and the songs that they weave into the plot are so funny – and this is coming from someone who has grown to despise musicals over the years!

An absolute classic, this show saw the start of the comedy careers of Adrian Edmondson, Rik Mayall and Ben Elton. Gross, hilarious, outrageous and completely ridiculous, the story’s all about a student house where four ‘friends’ live in discord.

The hippy, the lefty virgin, the punk and the villain, they live out the lives of youth in ‘80s Britain in two series of violent, unwashed lunacy.

This American classic gets replayed on TV so often, it must be the most aired show in history by now. As you probably know, it’s the story of six friends living in Manhattan. You might not know that every episode of the final season of Friends cost more than an entire season of Game of Thrones!

Did you also know that the word ‘friends’ is mentioned at least once in every episode of the ten-season show?

Apart from these classics, there are a few shows Mrs Romance and I prefer to watch separately. These are our true guilty pleasures… though I’ve got a feeling I’m going to be judged a little more harshly for my choices than she is!

This was first introduced to me by Mrs R’s best mate. She said she loved it because it was so bad. I had to agree with her. But in spite of how bad it was, I kept watching. Now I’m hooked. Mrs R loves to make fun of me because it features two brothers who – by her own admission – are good looking. 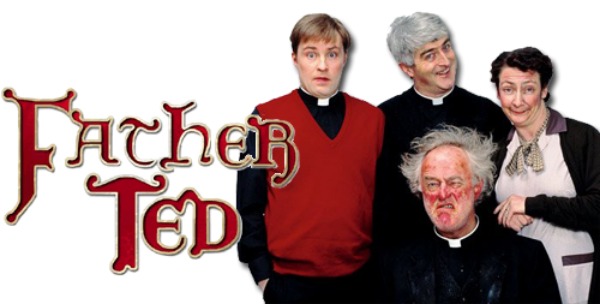 I love this show! It’s so funny and so irreverent (excuse the almost pun), I just wish it had gone on longer than just three series, but sadly Dermot Morgan (Father Ted) died of a heart attack, which ended the show.

It’s all about three Irish priests who live on Craggy Island and have to deal with the island’s surreal inhabitants. Father Ted aspires to fame and fortune, Father Dougal is a simpleton and Father Jack is a debauched old drunk. I love Father Jack: his lines are generally ‘DRINK’, ‘GIRLS’, ‘ARSE’ and ‘FECK’ – but delivered perfectly! 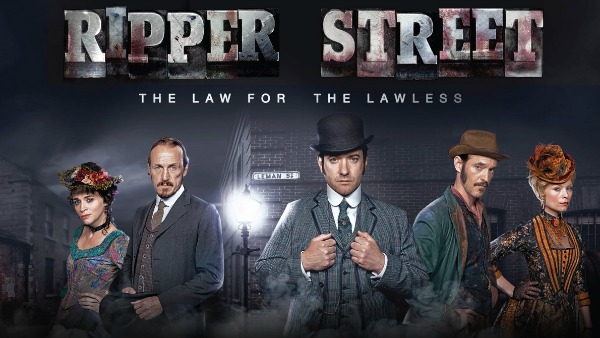 My sister sent me the DVD set of this English show for Christmas and it’s bloody good! Set in East London during the aftermath of Jack the Ripper, the detective inspector and his division face the countless dangers of keeping the peace in notorious Whitechapel.

Mrs Romance loves these shows… for some reason! She admits that her televisual choices are quite one-dimensional, but then who can blame her?!

Mrs Romance says: “A modern Sex and the City about four 25-year-old women going through their quarter-life crises. The characters are grittier and more complex than SATC, and easier to connect with.”

Favourite character: Jessa for her gorgeous hair and wardrobe, and her bohemian cool girl attitude. 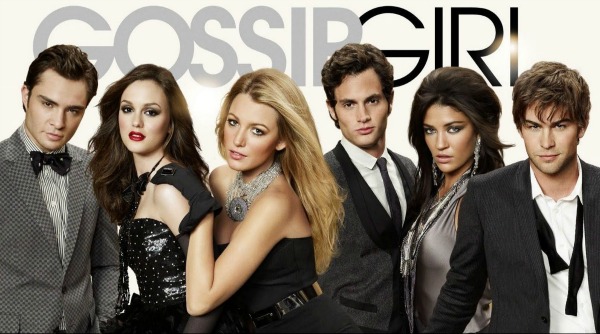 Favourite character: Serena for her hair and wardrobe, and Chuck for being cute and getting all the cool lines.

Claim to fame: I did see Penn Badgley getting very drunk while I was in New York! 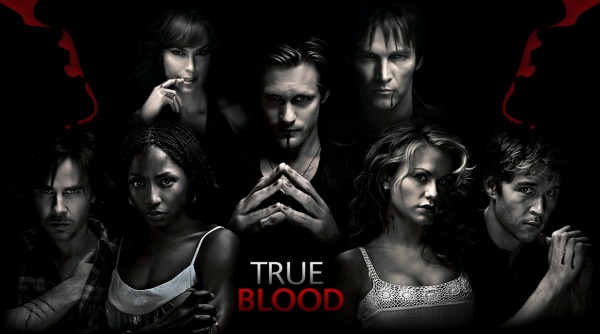 Mrs Romance says: “Super cheesy vampire drama series where ‘true blood’ is like the methadone to help vamps integrate into the general populous. Made worth watching for all the hot guys in it and who like to take their clothes off quite a bit. Love that there’s an Aussie in the cast – got to support local talent!”

Favourite character: Eric for having the best lines and for being rather easy on the eye.

As I’ve mentioned before, we love TV and we watch quite a bit while we work. It’s a pretty bad habit, we know. But it does mean we get through quite a few shows.

Do you have any recommendations of TV shows you love? What about any shows you know you shouldn’t be watching – do you have any guilty TV pleasures? Tell us in the comments!

Here are our top 5 popular TV shows that keep us at home (and that aren’t too embarrassing to admit to!)