There’s a good reason why everyone wants to visit Puglia, Italy. In fact, we’ve got 11 of them. Puglia has so much to offer, it’s little wonder that it’s the destination on everyone’s hit list. 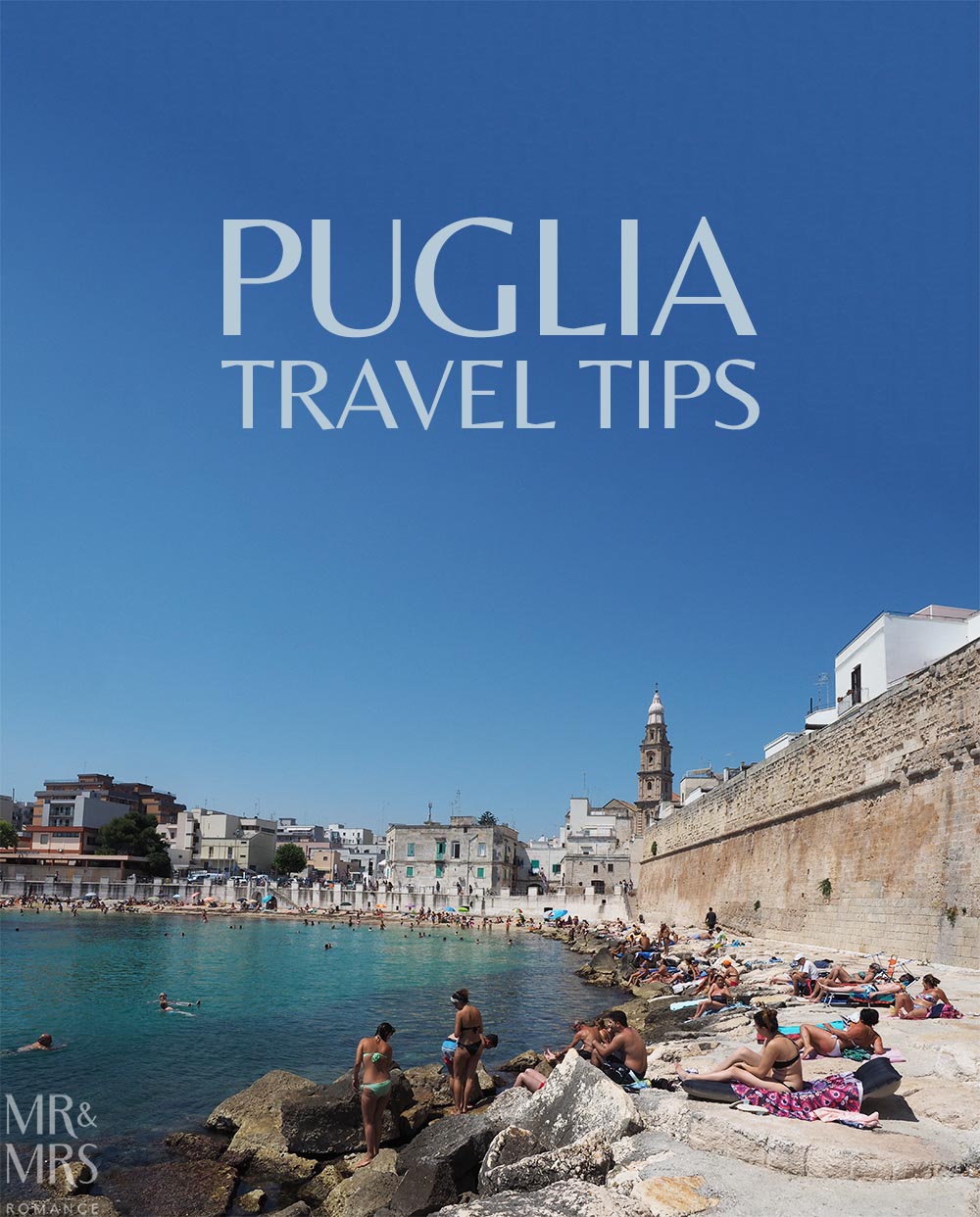 It’s not often you find a place – especially in Europe – that has so much to offer travellers and yet is almost completely untouched by tourism. But that’s pretty much what we found in Puglia.

We weren’t sure what to expect when we arrived there. In fact we’d only planned to stay in the region for a few days then leave to explore further west or north. As it was, we extended our trip and tried to see as much of this beautiful part of Italy as possible.

As with many great travel destinations, Puglia doesn’t just have the one feature that made us fall in love with it. Here are 11 reasons why everyone wants to visit Puglia – and why we can’t wait to go back.

11 reasons why everyone wants to visit Puglia, Italy 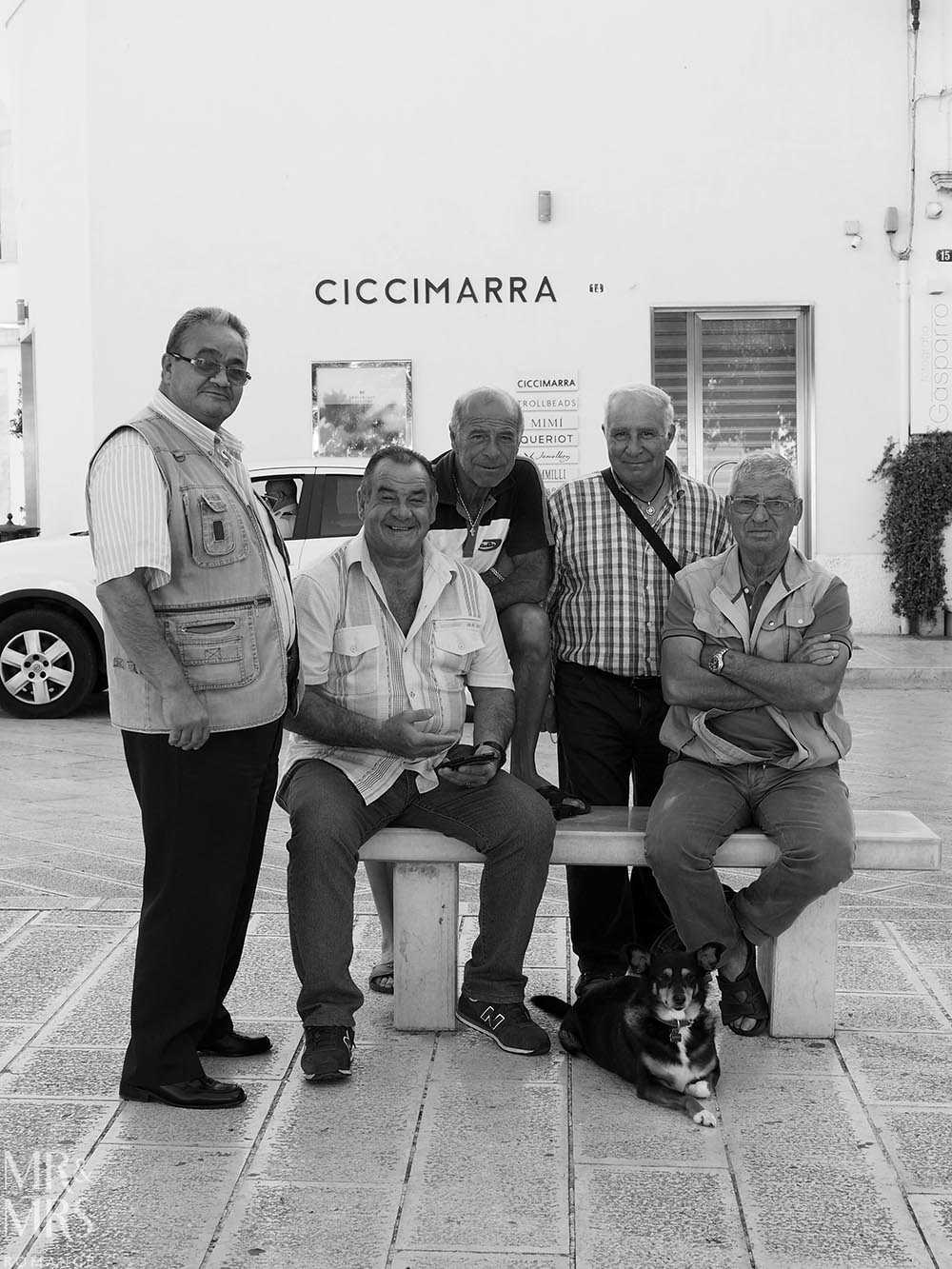 Southern Europe has a reputation for its friendly locals and Puglia is no exception. Everyone seems to have a bit more time to say hello here.

Even if you don’t know any Italian, a ‘ciao’ and a smile will always go down well.

If you want to work on your street photography, this is definitely a good place to start. Pretty much everyone is ok with having their photo taken – in fact the more senior gentlemen hanging out with their friends will insist!

It wouldn’t be a travel list of Italy without including food, would it? But in Puglia, food plays an even more important role than a lot of other Italian regions.

It’s all so fresh

Puglia is famous for its apricots. You’ve got to try them; you’ll find them in every greengrocer and every market here. And they’re cheap!

This region is also famous for its olives. You don’t have to go very far to find hillsides covered with olive groves.

Being a peninsular touching 4 different seas, Puglia’s fresh seafood is incredible. Every coastal town has a fishing port where you’ll find fishermen tenderising octopus by thrashing them with wooden paddles. 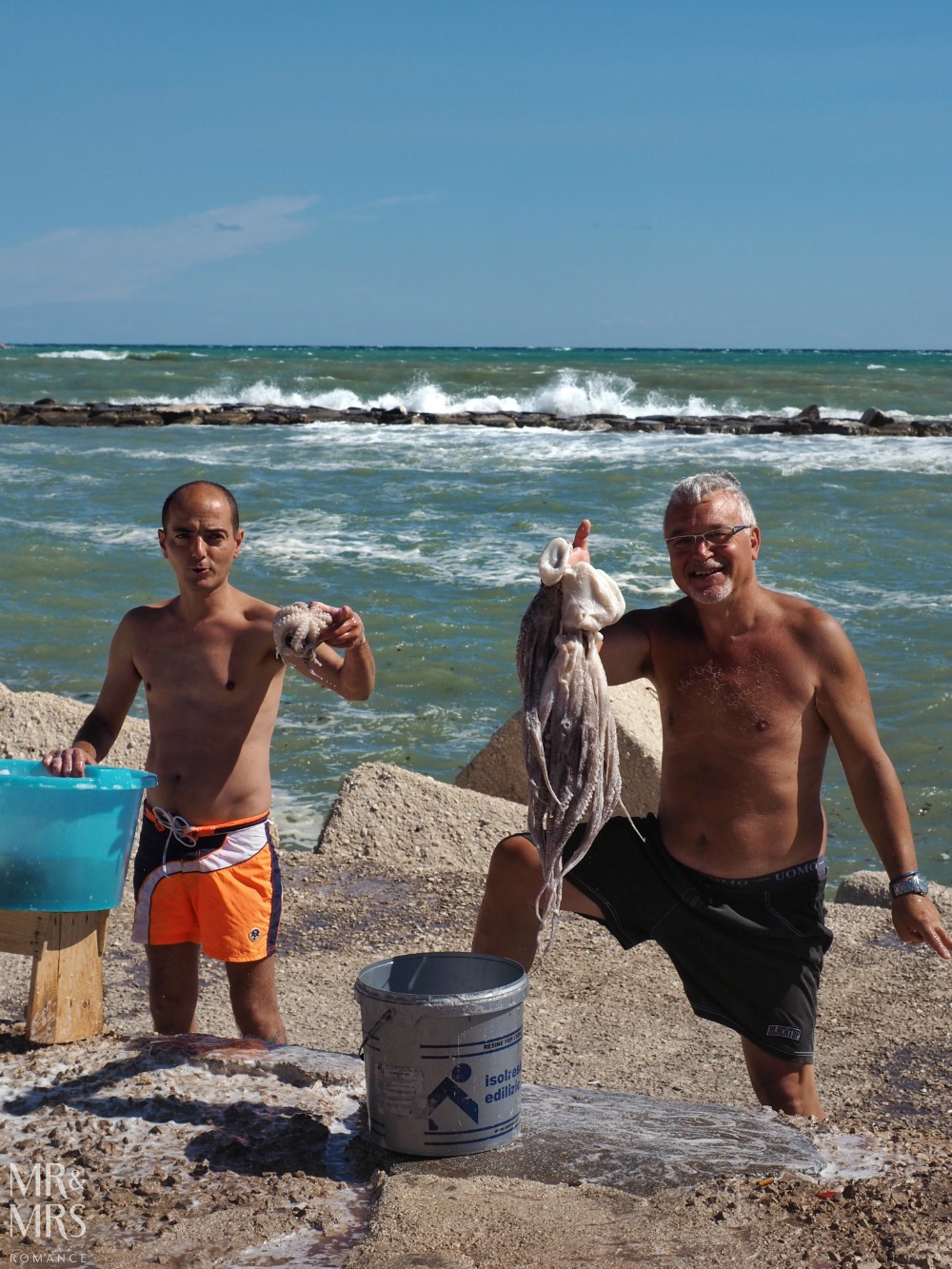 It’s all part of daily life

Almost everywhere you go in Puglia – but especially in the region’s capital Bari – you’ll find orecchiette. This pasta shape, which translates as ‘little ears’, originates from Puglia.

When you explore Bari, you’ll come across ladies working on bit tables outside their houses making this pasta. Everyone eats it and everyone loves it.

As for the octopus I mentioned earlier, you’ll find it on pretty much every restaurant menu. Order it; it’ll change your life. 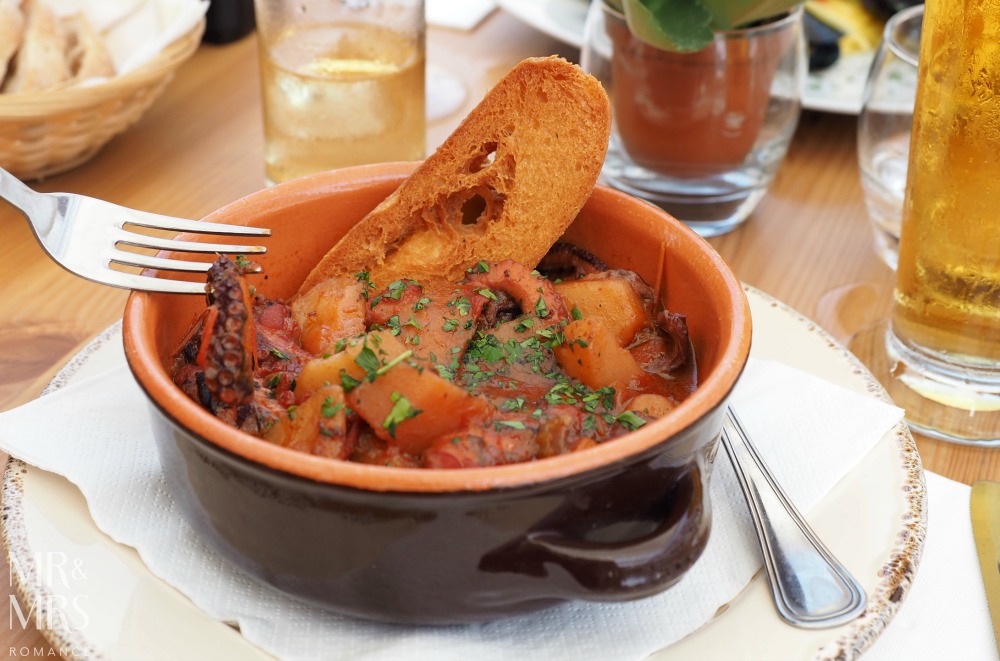 3. The history and cultural influences

From the shores of southeastern Puglia you can easily see the Albanian coastline. And not much further south is the Greek mainland.

The town of Leuca on the southernmost tip of Puglia – is closer to the capital of Greece than it is to Rome.

It stands to reason then that a lot of Puglia’s culture, history and even place names come heavily influenced from its neighbours.

Pugliese cities like Monopoli and Gallipoli show Greek influence in their names – ‘poli’ being Greek for ‘town’. Gallipoli may have been ‘Kali poli’ once – ‘kali’ meaning beautiful, which Gallipoli certainly is. 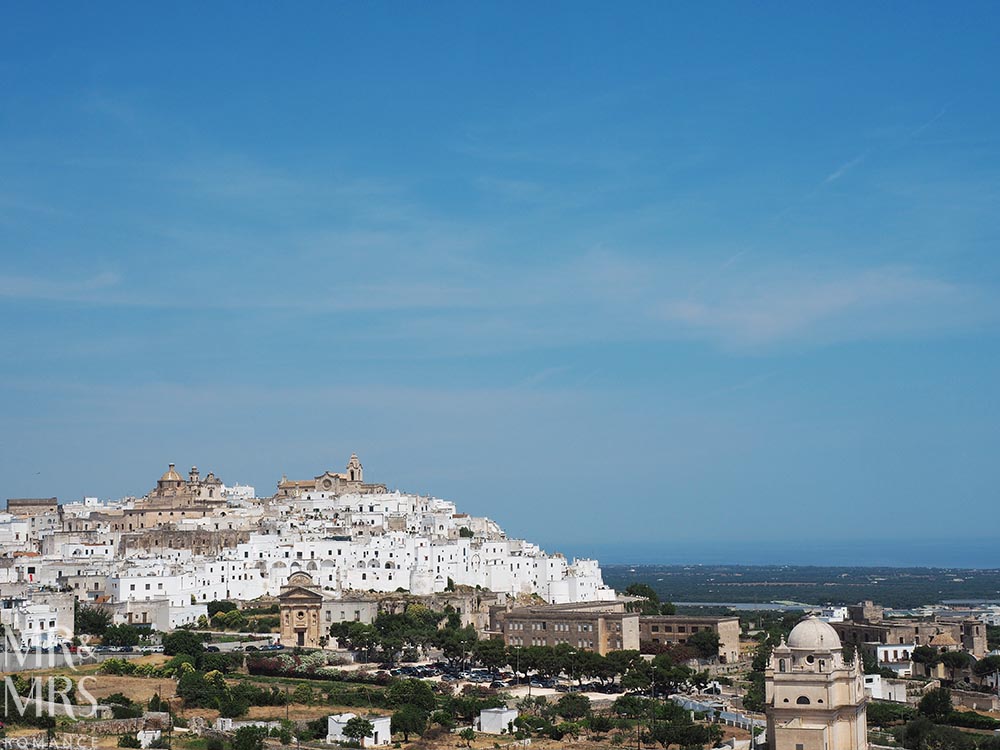 Historically, Puglia has a lot more on the clock that you might think. Towns like Lecce predate more prominent cities like Florence, and it seems that everyone from southwestern Europe has lived in Puglia at some stage. Even the Spartans are said to have done a stint here.

Walking amongst the baroque walls and cobbles of whitewashed towns of Puglia feels like your dipping your toe into a silent millpond of history.

4. The beaches and the views

Located on one of the biggest peninsulas in the world – the heel of Italy – Puglia lays claim to over 800km of the country’s coast.

This coastline varies from quiet sandy beaches to craggy cliff tops and rocky promontories. This range gives you the luxury to experience the luxuriant and the dramatic almost in the same place.

Puglia is also home to one of the world’s great cliff-diving venues. Towns like Polignano a Mare often host these heart-in-mouth events, but all the way round the Puglia coast you’ll find thrill-seeking locals hurling themselves from heights into the deep blue. 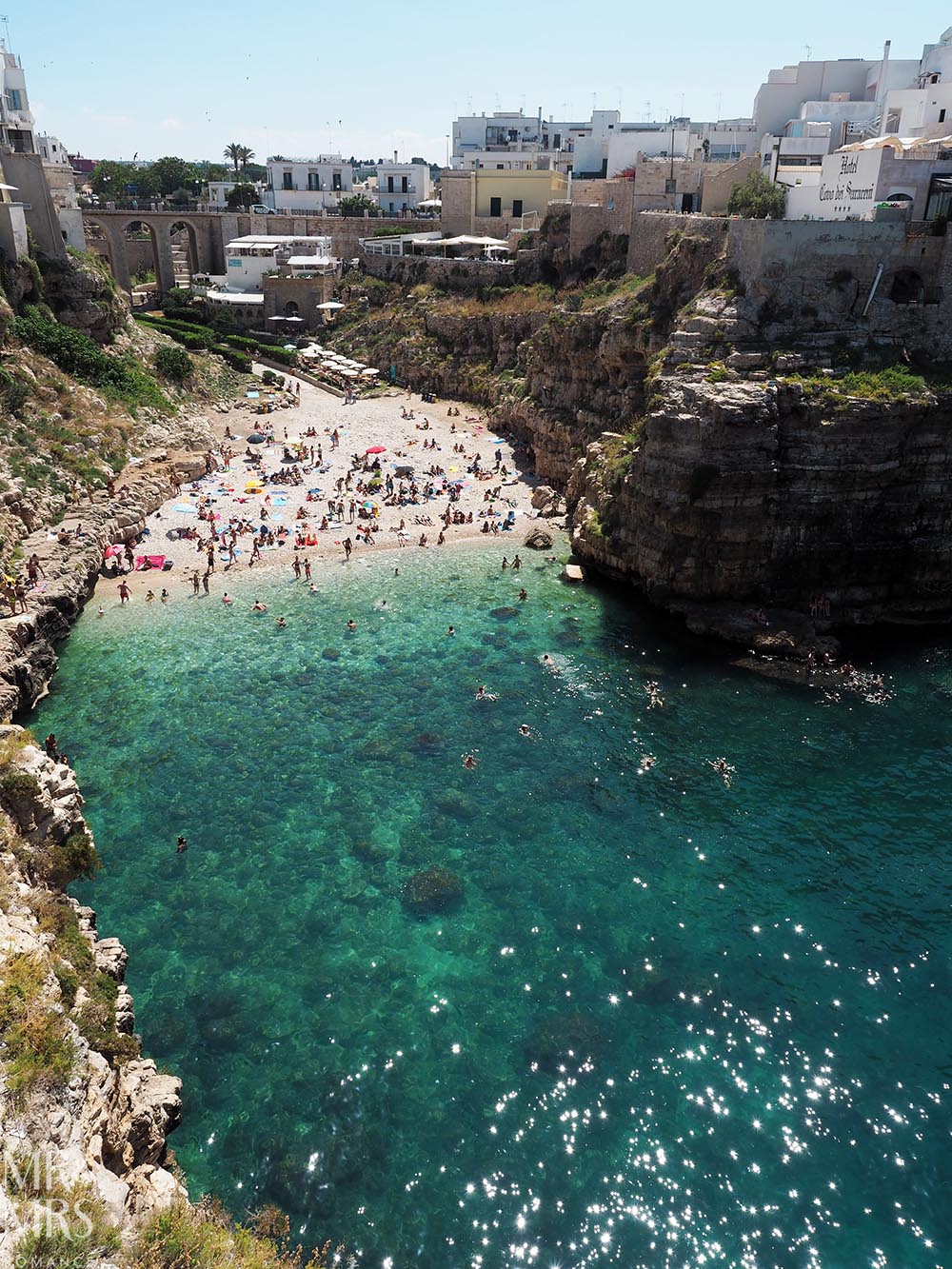 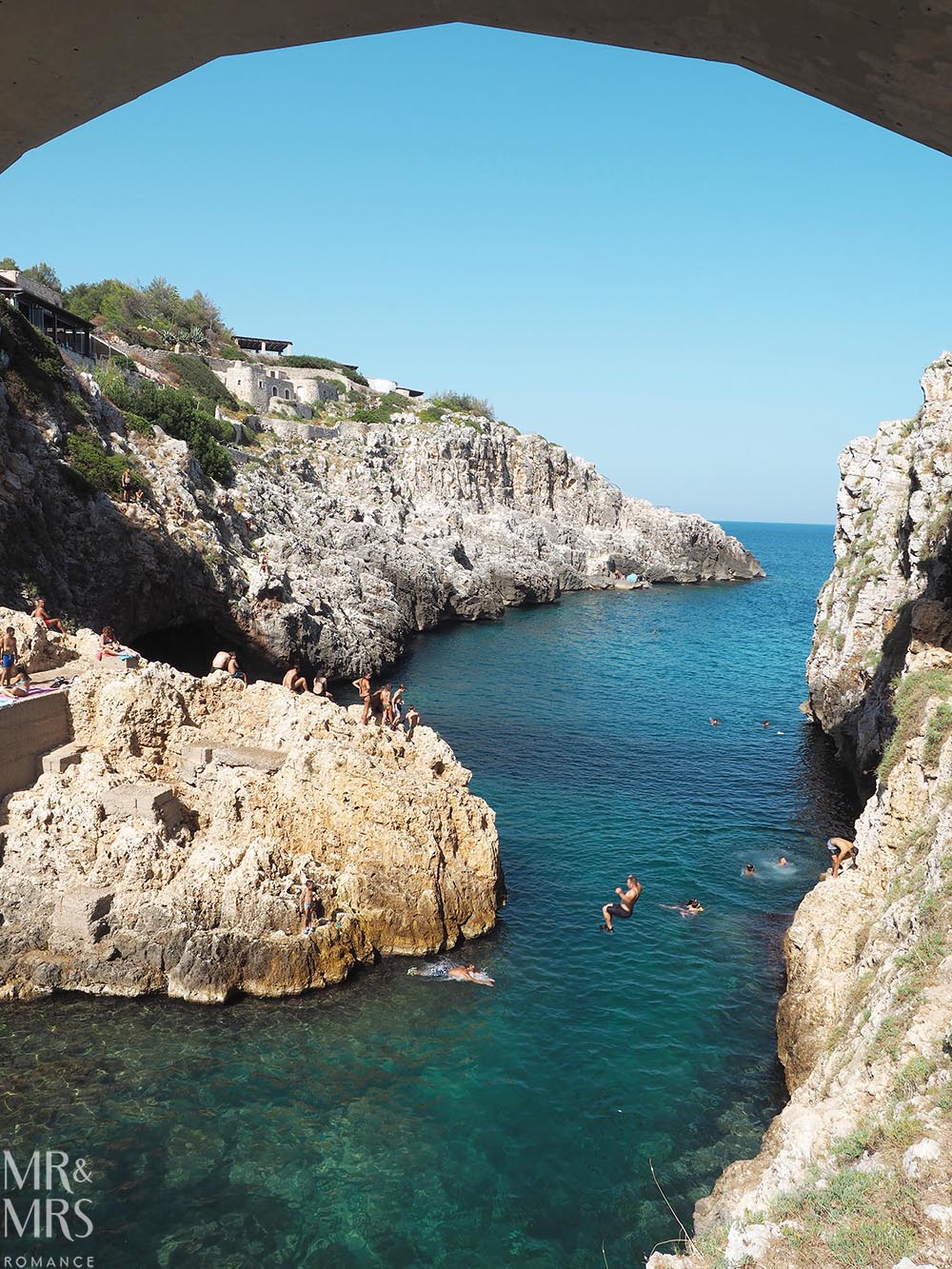 It can get hot in Puglia. No doubt about that. But being a peninsular, there aren’t many places here that are far from the sea or its breeze.

In fact, locals often talk about The Four Winds – the warm but capricious southern Sirocco, the cool northern Tramontana, the westerly Ponente and the easterly Levante. Depending on which is blowing, locals will know which beach to go to and how people will be feeling.

It gives meat to the mantra “va dove ti porta il vento” – go where the wind takes you – and the locals live by it.

More about the four winds here.

Probably our favourite thing about Puglia is how relatively untouched it is. Apart from the big tourist attraction of Alberobello – the town of the trulli – you rarely see the dreaded coach-loads of mass tourism.

Locals here have been left to their own devices, which means that careful, considerate visitors like you and I are able to experience a region of Italy that’s still quite new to foreign interest.

I dislike the expression ‘off the beaten track’, but it does apply here. Long may it remain untrampled. 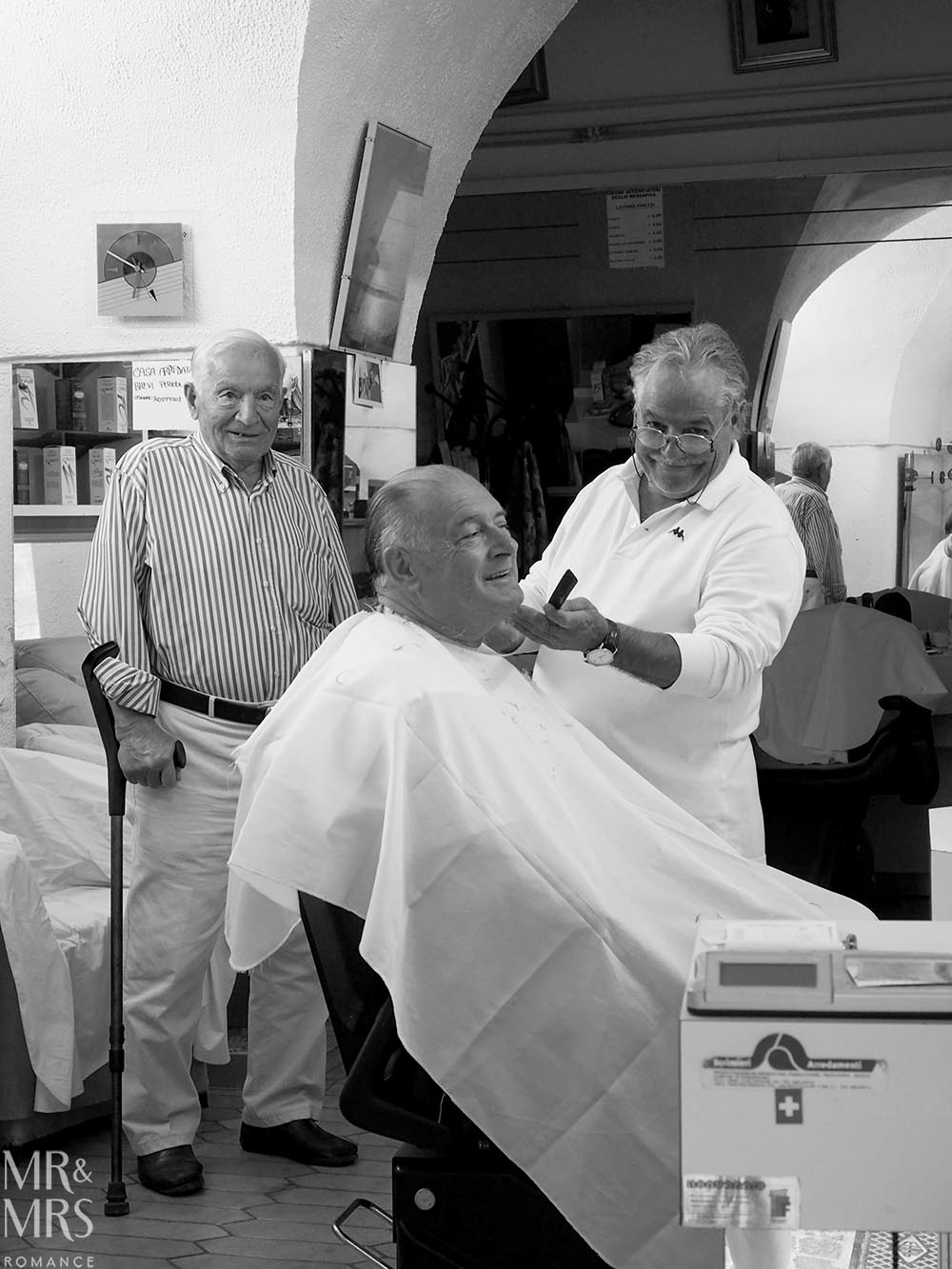 Following on from the previous point, Puglia has retained its traditions and culture better than many parts of the world. When you spot a street parade here full of the pomp and finery of yesteryear, you know it’s because that’s what’s been happening here for centuries. It’s not a tourist hook.

The ladies making their orecchiette on the street love the attention from passing holidaymakers, but the nonnas would still be doing it if they weren’t aiming their cameras at them.

There aren’t many travel destinations where real life is not only so accessible but also so interesting. From the fishermen playing Scopa on the wharves to the nuns hopping in a friend’s car to go to the next messa, you’ll see it all – but not because they want you to. They’re just doing it. 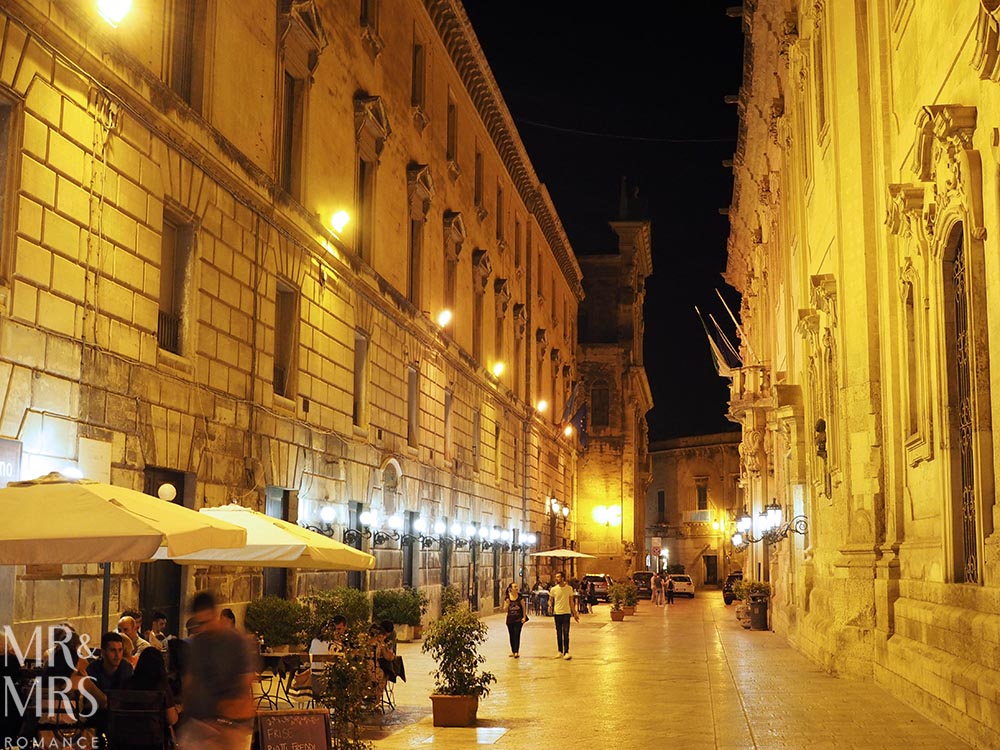 8. The ease of arriving

In spite of seeming quite isolated from the rest of mainland Italy – and a place where few tourists end up – Puglia is incredibly easy to get to. Flights from London leave all the time and aren’t expensive.

Flying in from other European countries and even other Italian cities – is easy too.

Most flights to Puglia land in Bari, but look out for ones going to Brindisi too. In fact, we found a flight from Brindisi to Stockholm last time we were there. What a random flight path to maintain.

9. The simplicity of getting around

You’ve really got 2 options for getting around Puglia: the national train service TrenItalia is awesome and will take you from Bari to pretty much every major town in the region.

If you’re in Puglia for less than a week or if you’re not confident driving, we’d definitely recommend using the train service.

If you’re in Puglia for longer, want to see more remote parts of the region and are confident behind the wheel, hire a car. We hired from Europcar in Monopoli and dropped it off at Brindisi Airport.

Here are some more tips on driving in Puglia. 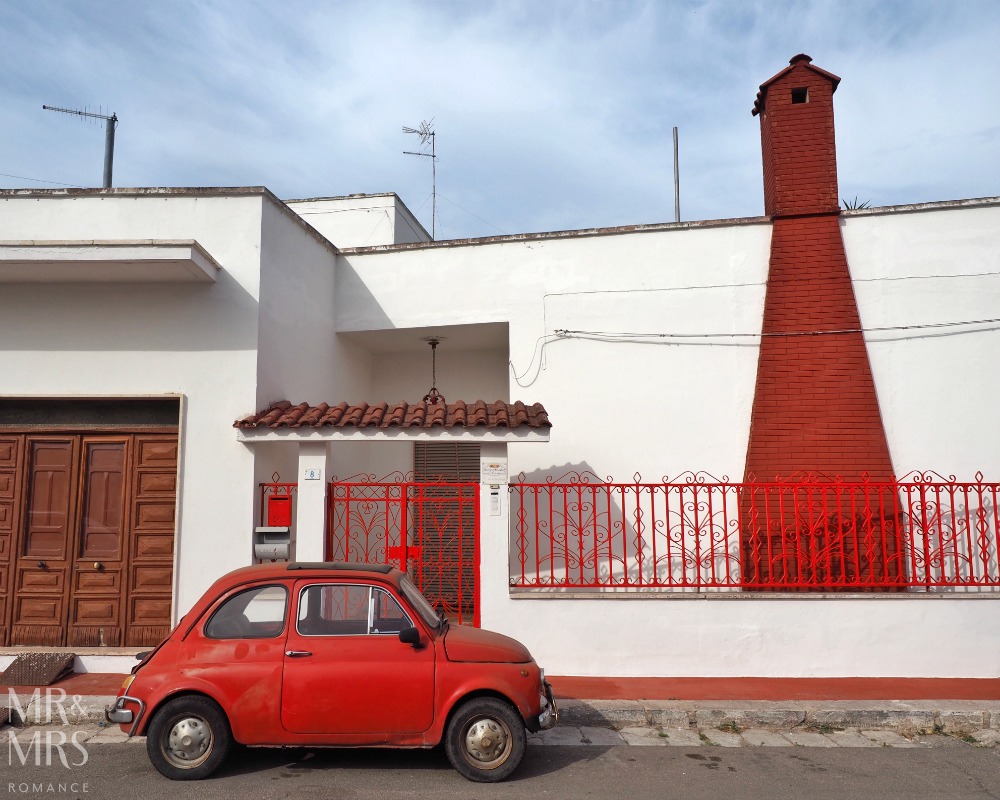 Driving in Puglia is actually awesome. I was a bit nervous initially, but it’s way easier driving there than in the Cinque Terre or in Naples.

Roads are in good condition, signage is reasonably clear and there aren’t that many cars on the road considering the population of Puglia.

We spent around 2 weeks in Puglia and visited a lot of it. Check out our post and video on where to take the best photos in Puglia. It details many of the places we explored.

Perhaps because tourism proper hasn’t really reached Puglia yet, it’s not too expensive for bed and board there. Or perhaps it’s because of a lower cost of living in the region.

Looking for restaurants that don’t have English menus in plain sight or specials boards in English will help you navigate to the better local food spots – and if you’re looking for recommendations for food in Bari, check out this post.

For accommodation, we found AirBnB to come up with the goods throughout the region, and it was cheaper than any of the places we’ve stayed in other parts of Puglia. But if you want to stay in one of the trulli, check this place out. 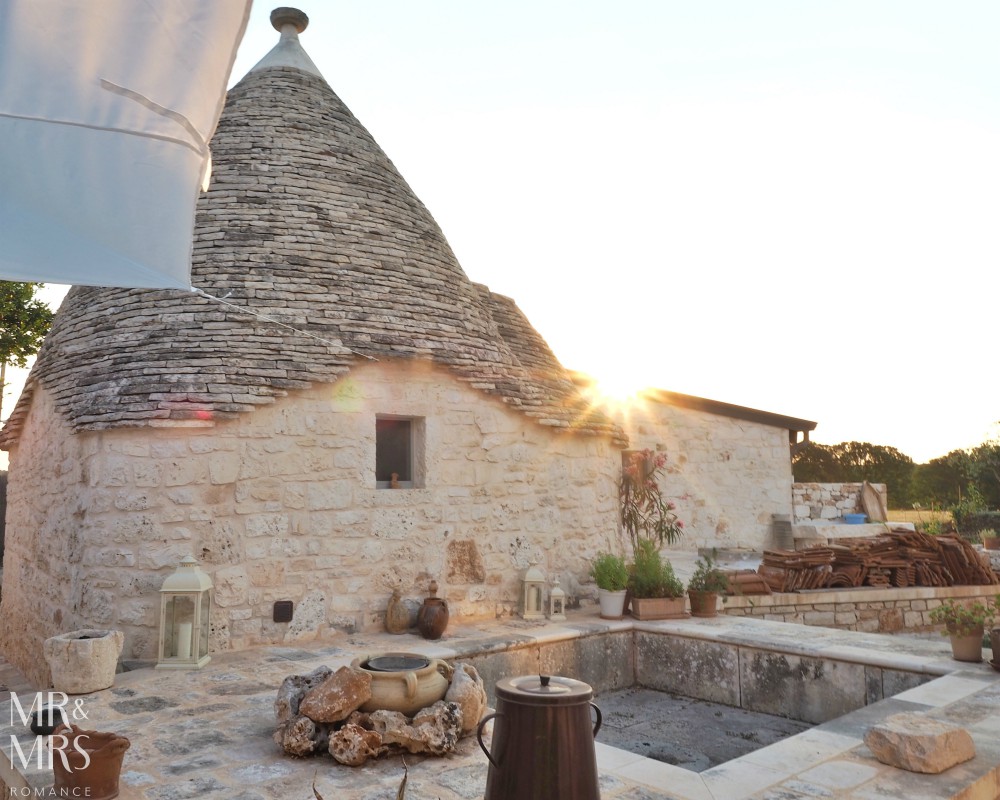 Before you book flights though, I thought I should do some due diligence and give you a quick rundown of the negatives to Puglia. Don’t worry, I couldn’t think of many!

– Not many people speak English – you’ll still get by with a bit of broken Italian and gestures, but just so you know.

– It’s quite quiet there – don’t go expecting bustling nightclubs and thronging streets. It’s much more laid back in Puglia.

– Not many formal attractions in the tourist sense – don’t go expecting to find a Disneyland here. Apart from Alberobello and its trulli, the things to see aren’t obvious. However, Puglia does have 3 of Italy’s 53 UNESCO sites. 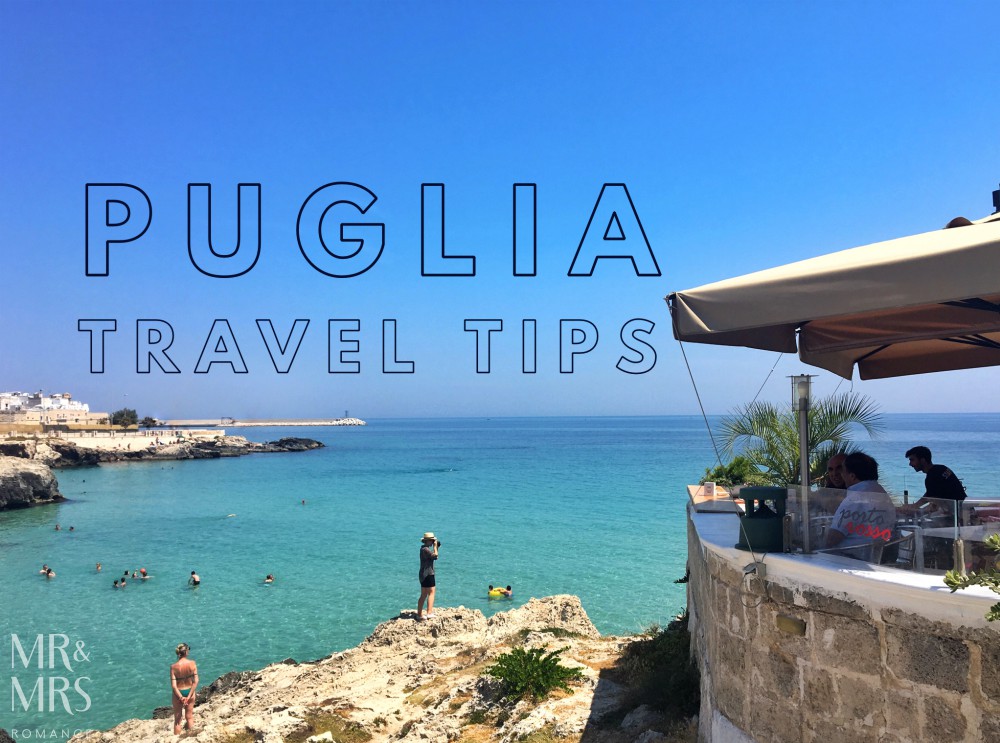 We hope you enjoy your time in Puglia as much as we did. It’s a beautiful part of the country – and as you can see there are plenty of reasons why everyone’s talking about it.

You’d better get there quick before everyone stops talking and starts going there.

Can you believe this will be our last IG Edition from Australia for the next 3 months?! If you can, please let me know…