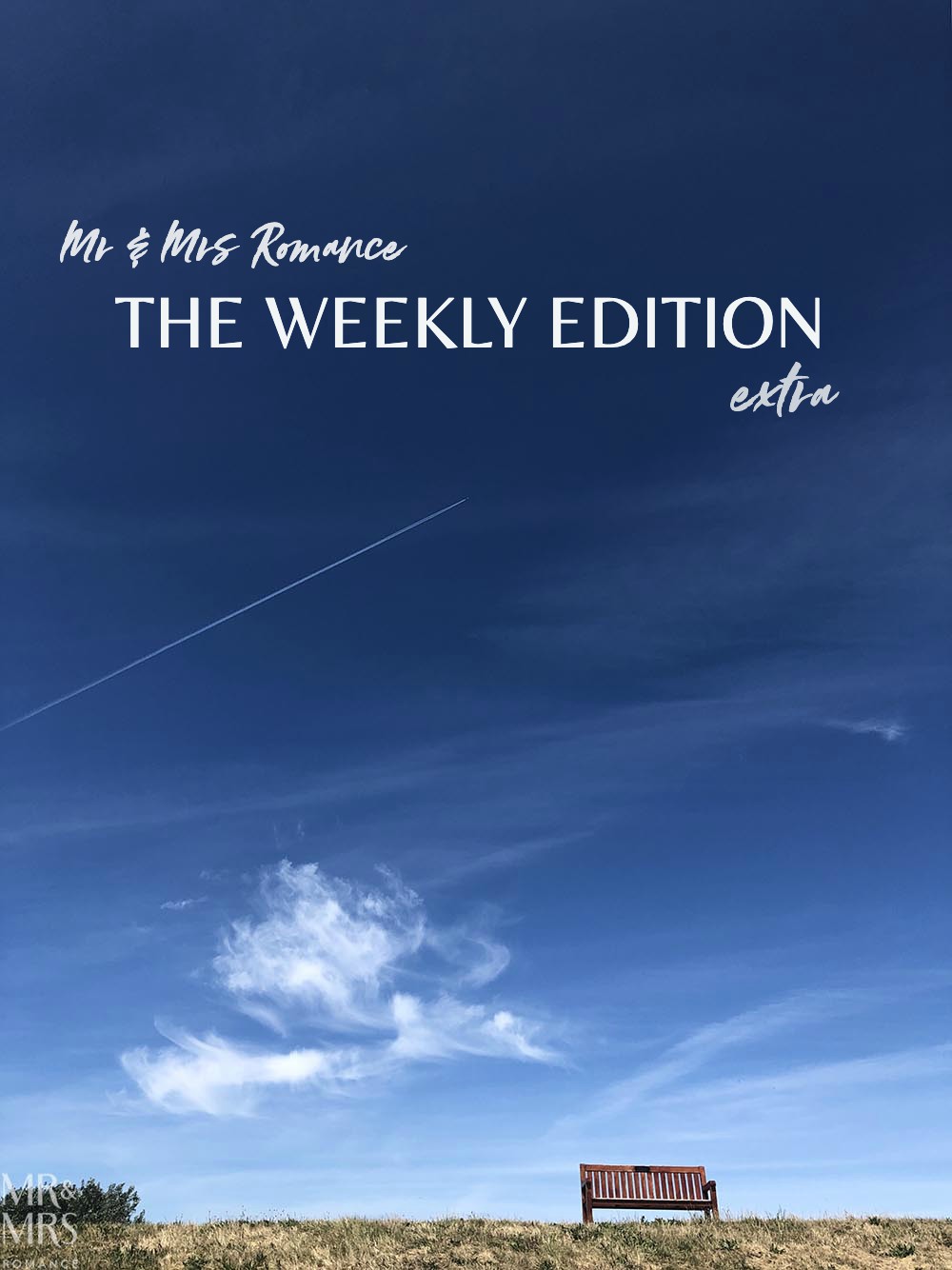 The past nine weeks we’ve been in the UK and Europe have been pretty busy. There have been plenty of things we’ve wanted to share with you but just haven’t had the time or space in the stories we’ve published.

Now we’re back in Sydney and we’re just waiting for dust to settle again, we thought we’d put together a few of the other highlights from our trip we didn’t get a chance to tell you about before.

From big barbecues and beach time to vegan burgers and the most dramatic doggy make-over you’ll ever see, here’s our Weekly Edition Extra! 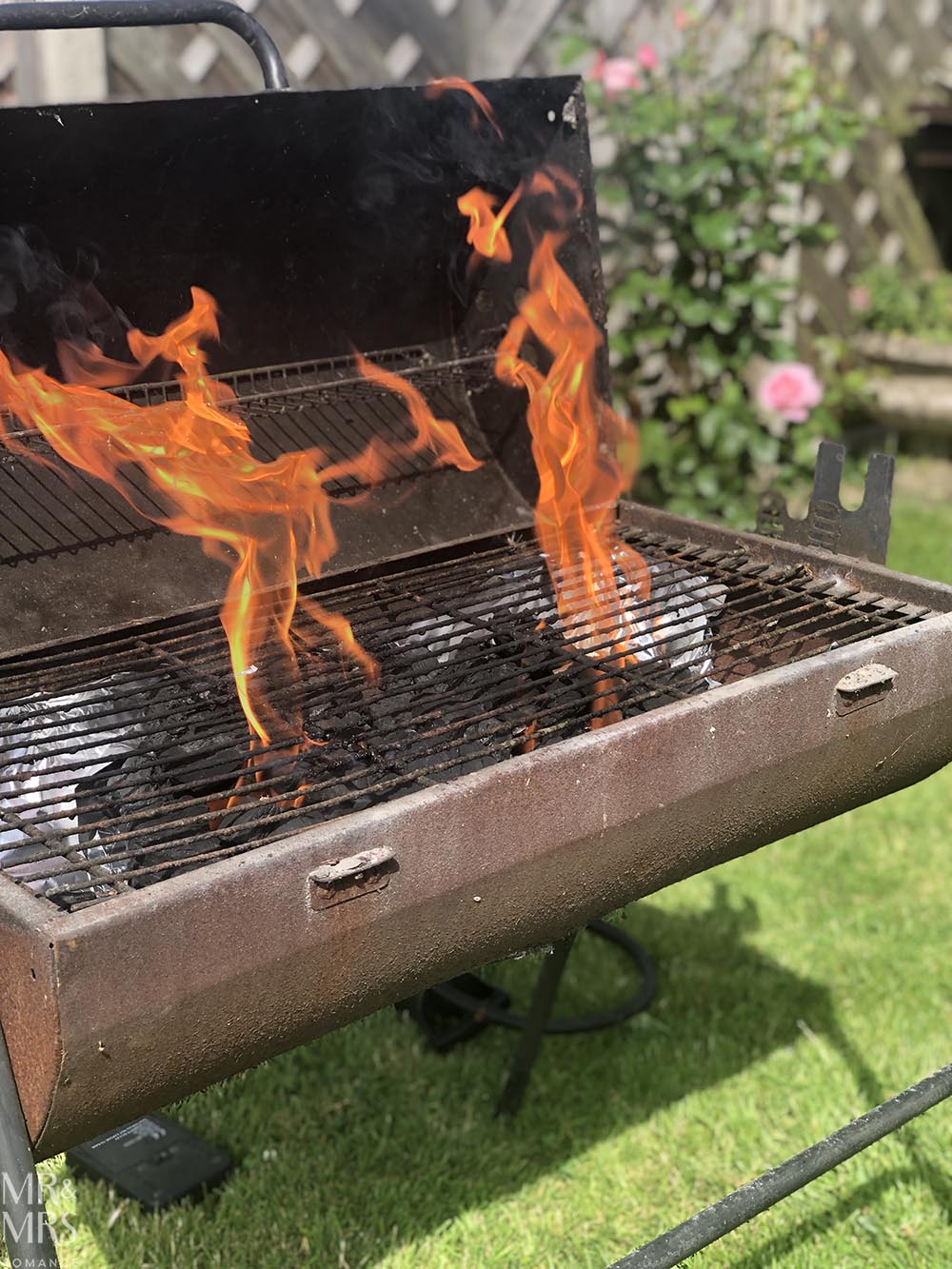 Summertime in the UK always means barbecues. And this old thing has seen some real action in the field.

It doesn’t take much convincing to get our mates Dave and Clare to bring out their catering-grade charcoal and fire up the braai! 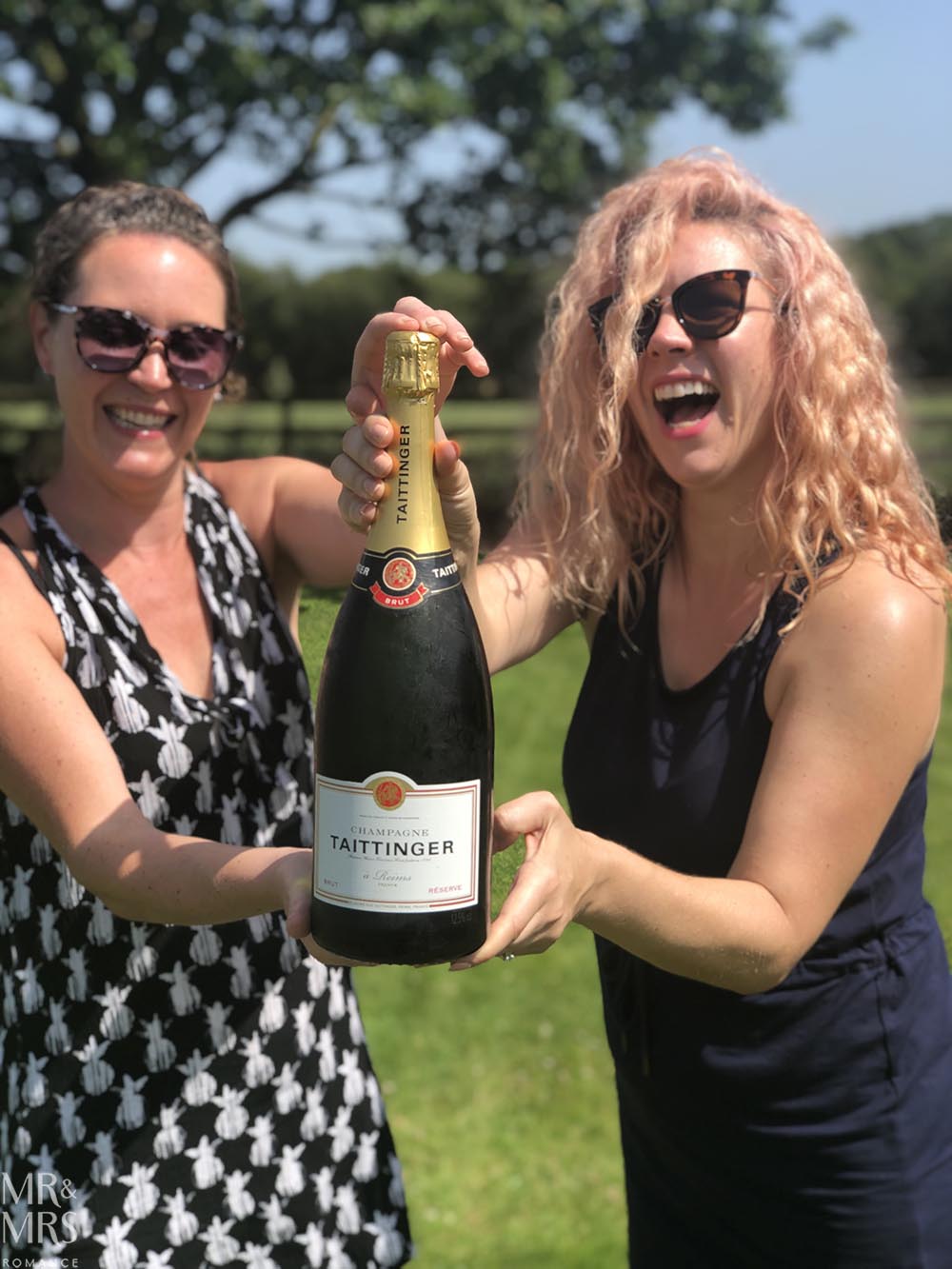 While Dave’s cooking down the charcoal and getting everything set, Christina and Clare bring out the big guns. And by that I mean this monster bottle of Taittinger Champagne.

Clare won this huge bottle of bubbly a while ago and has been waiting for Christina to come over for a ‘valid excuse’ to open it! 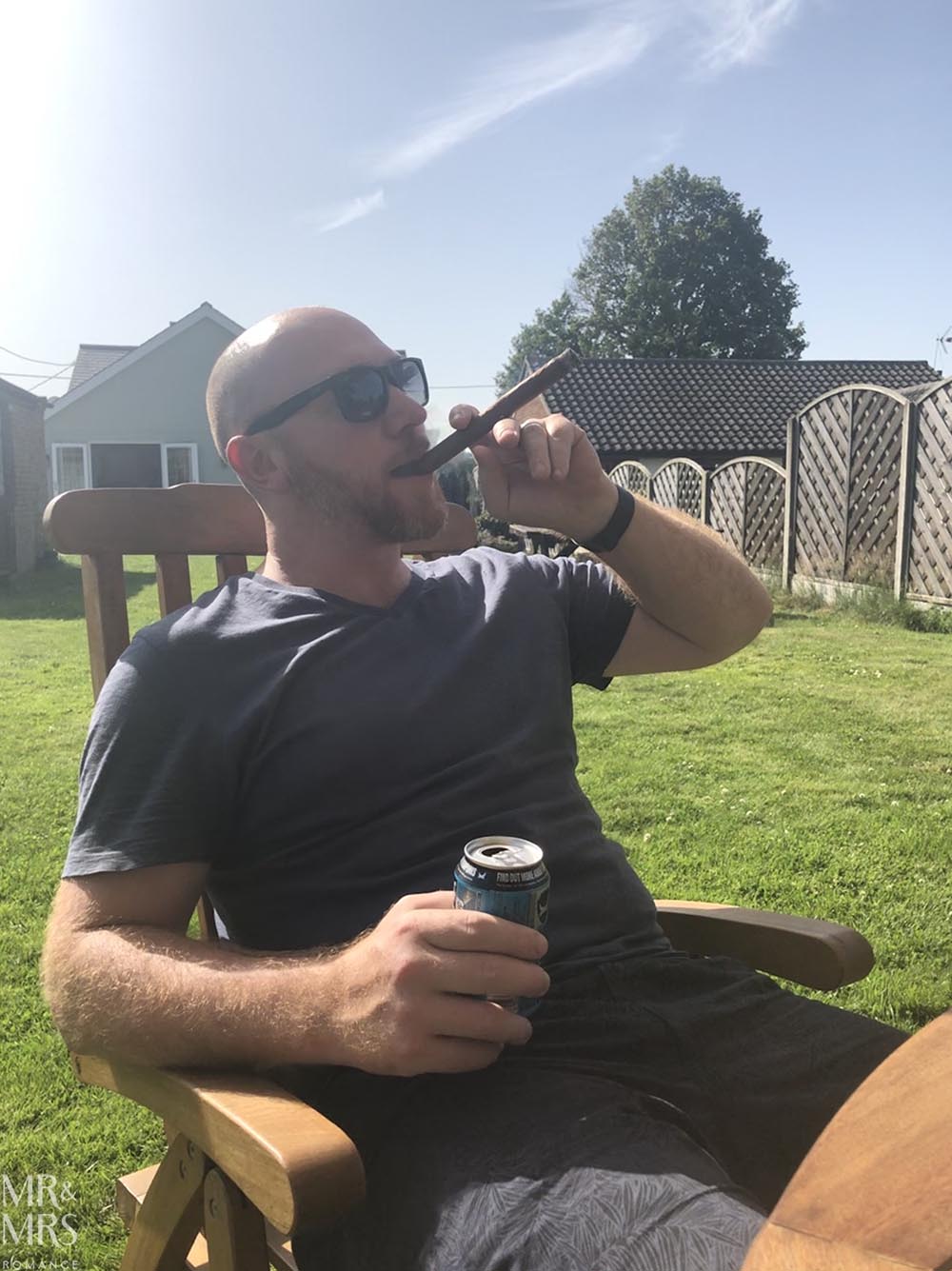 And while all this is going on, I’ve decided to go big too with this massive cigar! I’ve been saving this Partagas Lusitania for quite a few years now – it’s a cigar that requires a fair bit of time commitment, taking between 2 – 2½ hours to finish. Well worth it though. One of the best cigars I’ve had. 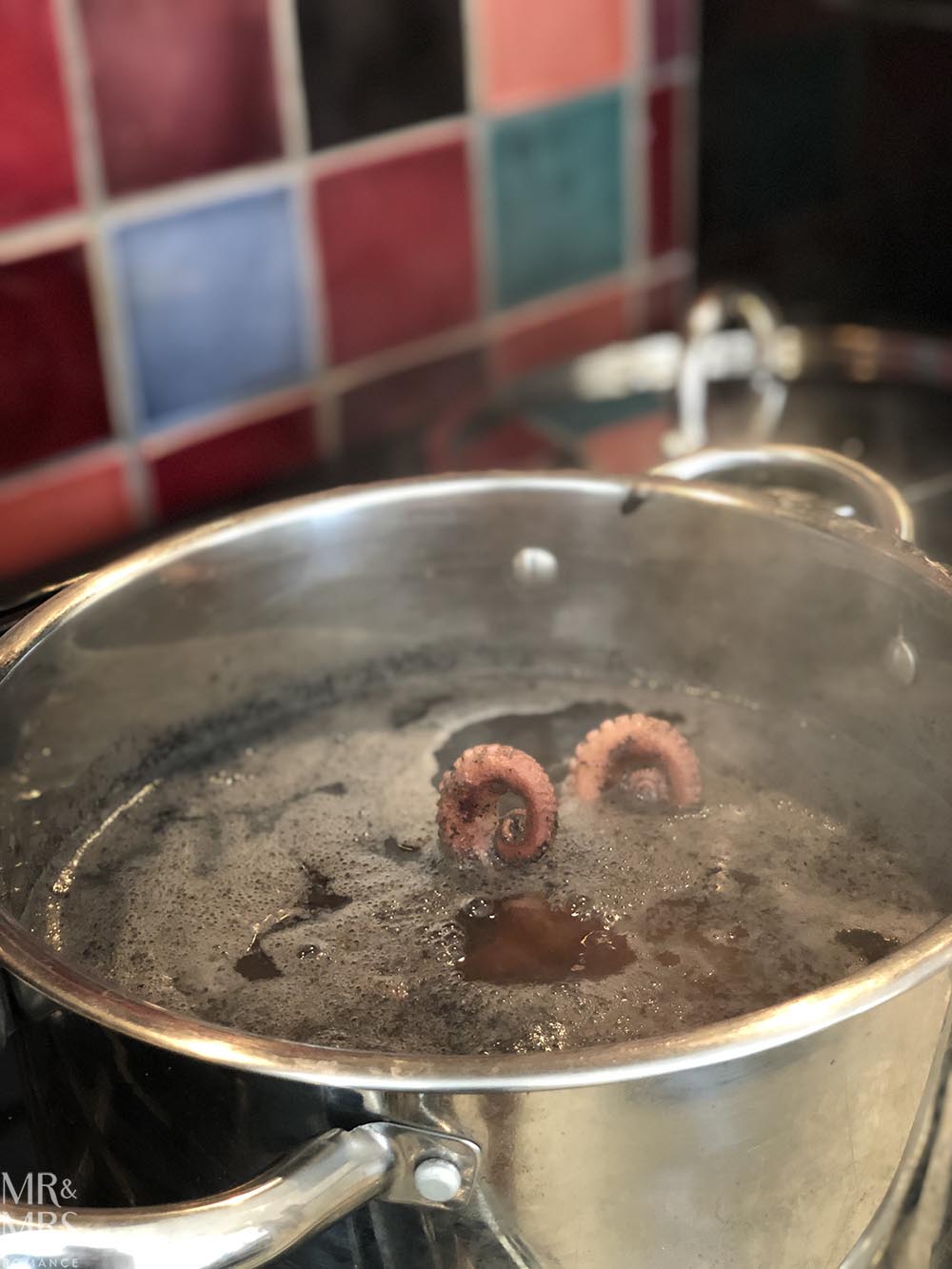 Back in the kitchen, Chef Dave is blanching the fresh octopus we’ve sourced. In fact, today’s whole cooking carnival was inspired by a conversation about barbecued octopus, so this part of the meal is really the linchpin.

Some recipes call for adding a wine cork to the pot when you’re boiling the octopus. I don’t know why. But adding a little vinegar helps to break down the proteins and make the meat more tender when it comes to grilling. 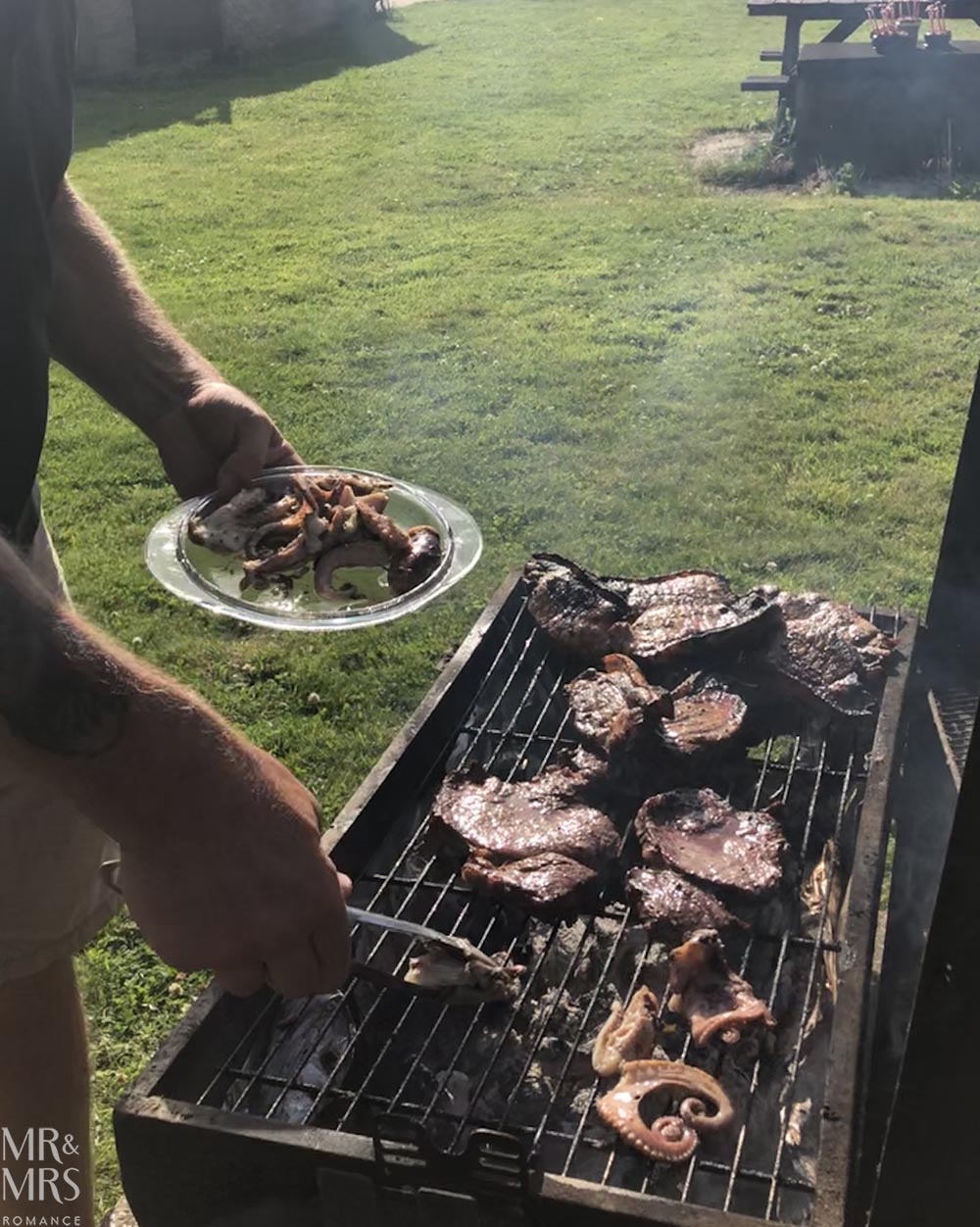 Chef Dave is now at the grill, barbecuing the pieces of octopus on the hotter part of the coals. The idea is to crisp up the outside before the meat inside dries out too much. 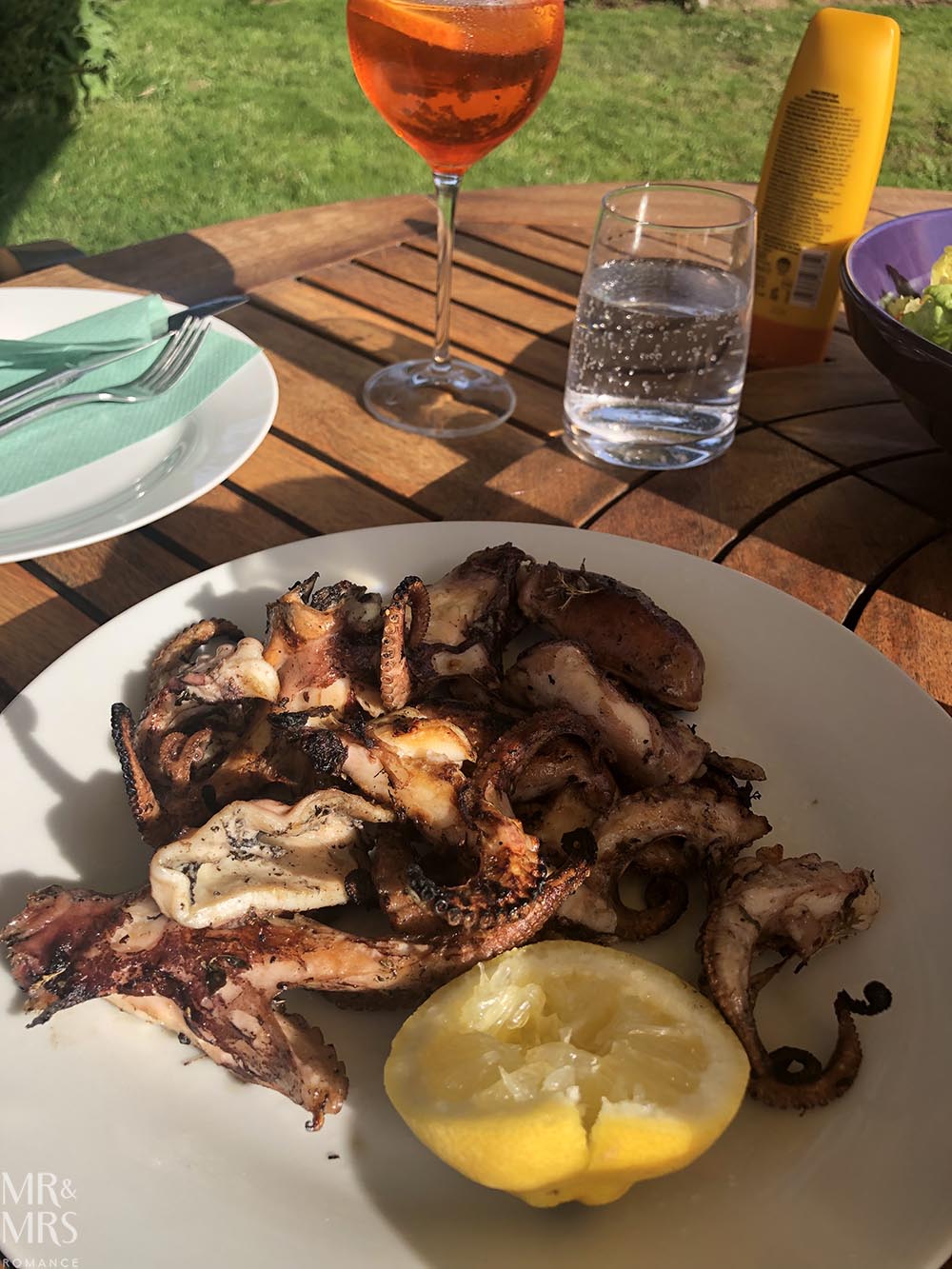 Well done, Dave. 100% success – the octopus is perfect. Tender yet crisp, full of flavour and texture. 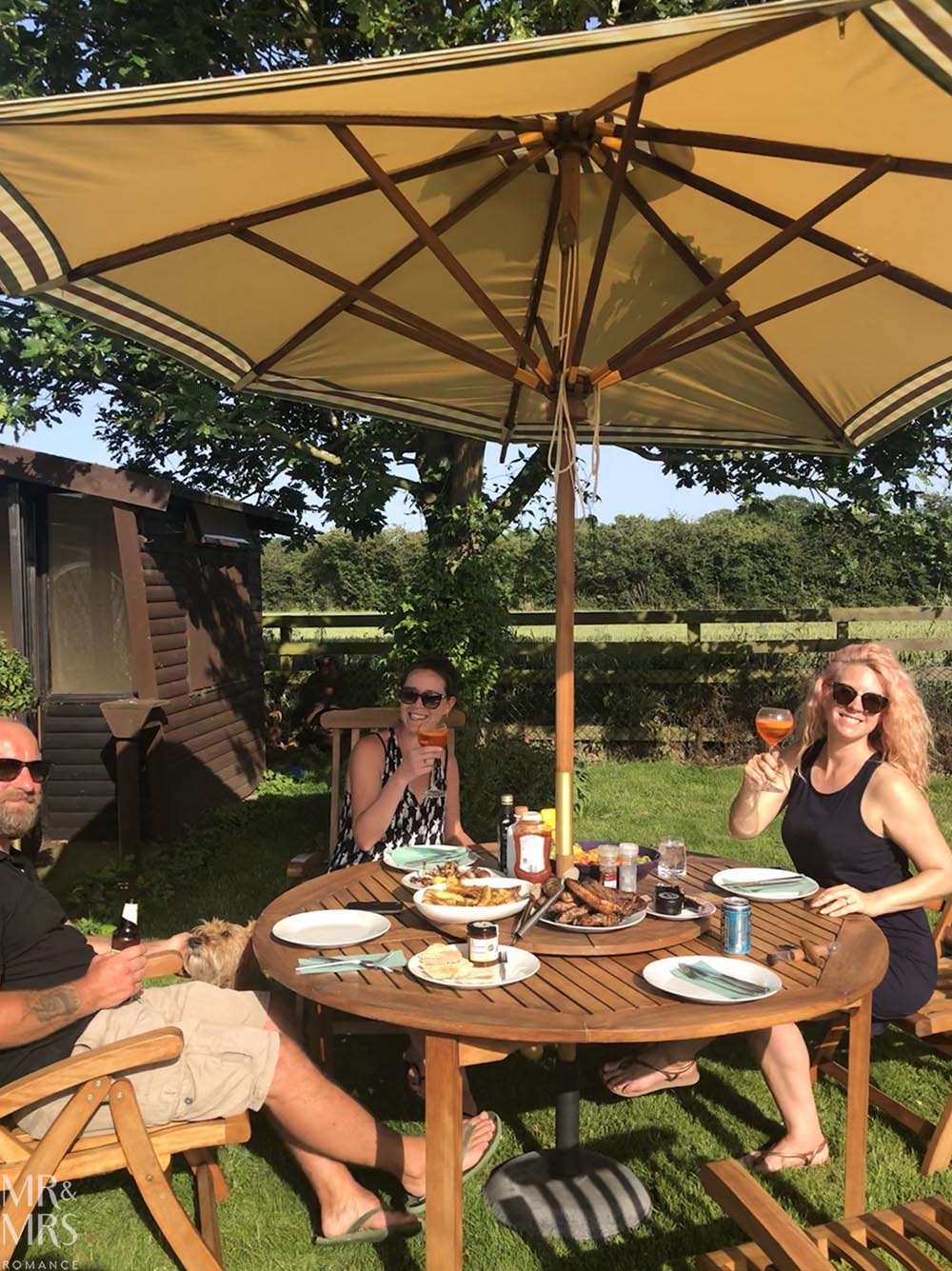 Things don’t get much better than this. A sunny afternoon and long evening in the garden, bellies full, plenty to drink and the best friends you could ever hope to have. Cheers! 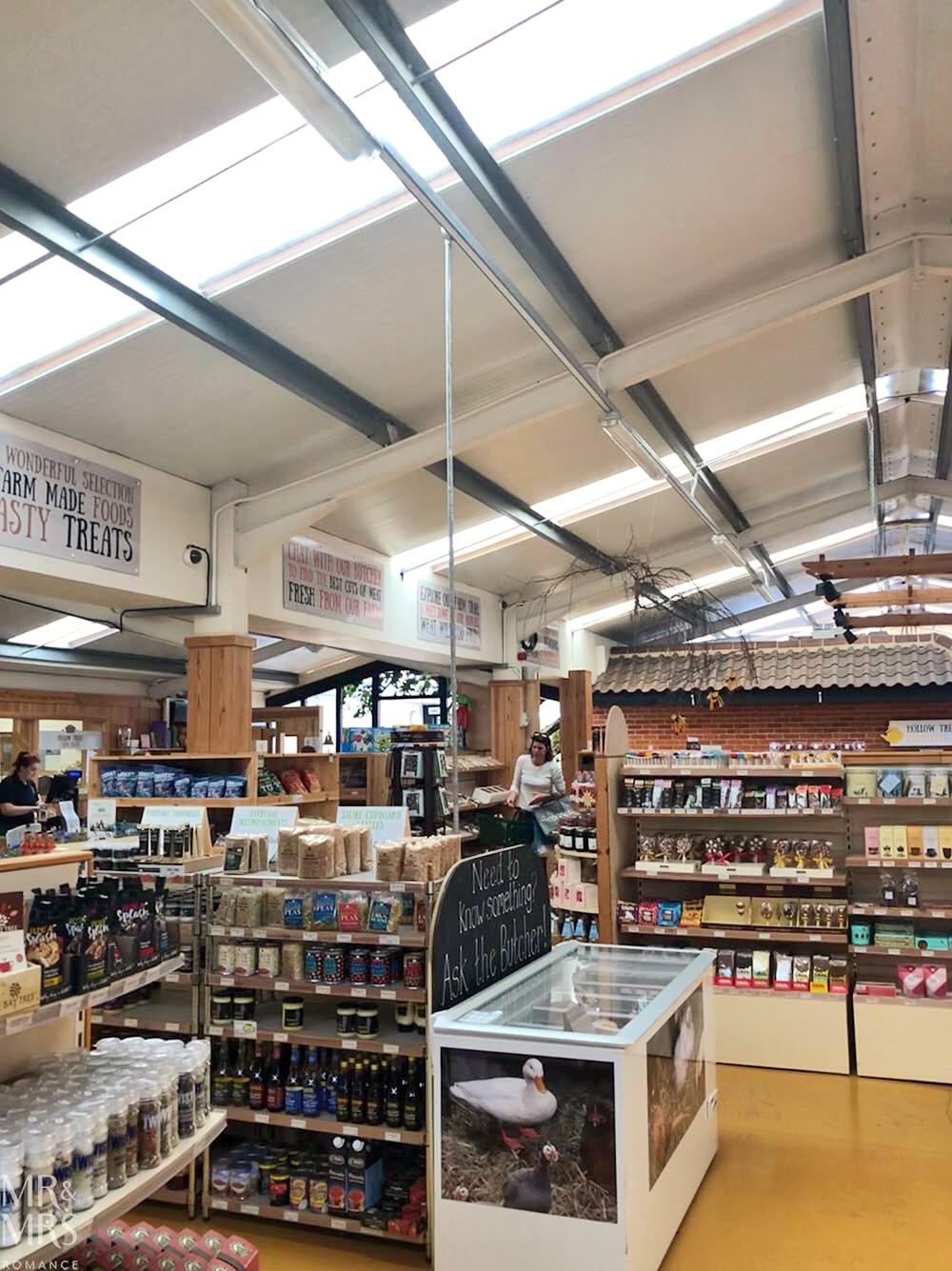 Today, I’m out and about with my mum and dad to one of their favourite places. About half way between the towns of Ipswich and Sudbury in Suffolk, East Anglia, Hollow Trees Farm is home to one of the best farm shops and cafes you’ll find.

The shop has its own deli counter with amazing cured meats and cheeses, a fishmongers, a butcher’s counter where you can even see cuts of meat being dressed, and shelves and shelves of delicious condiments, pickles, jams and ingredients. 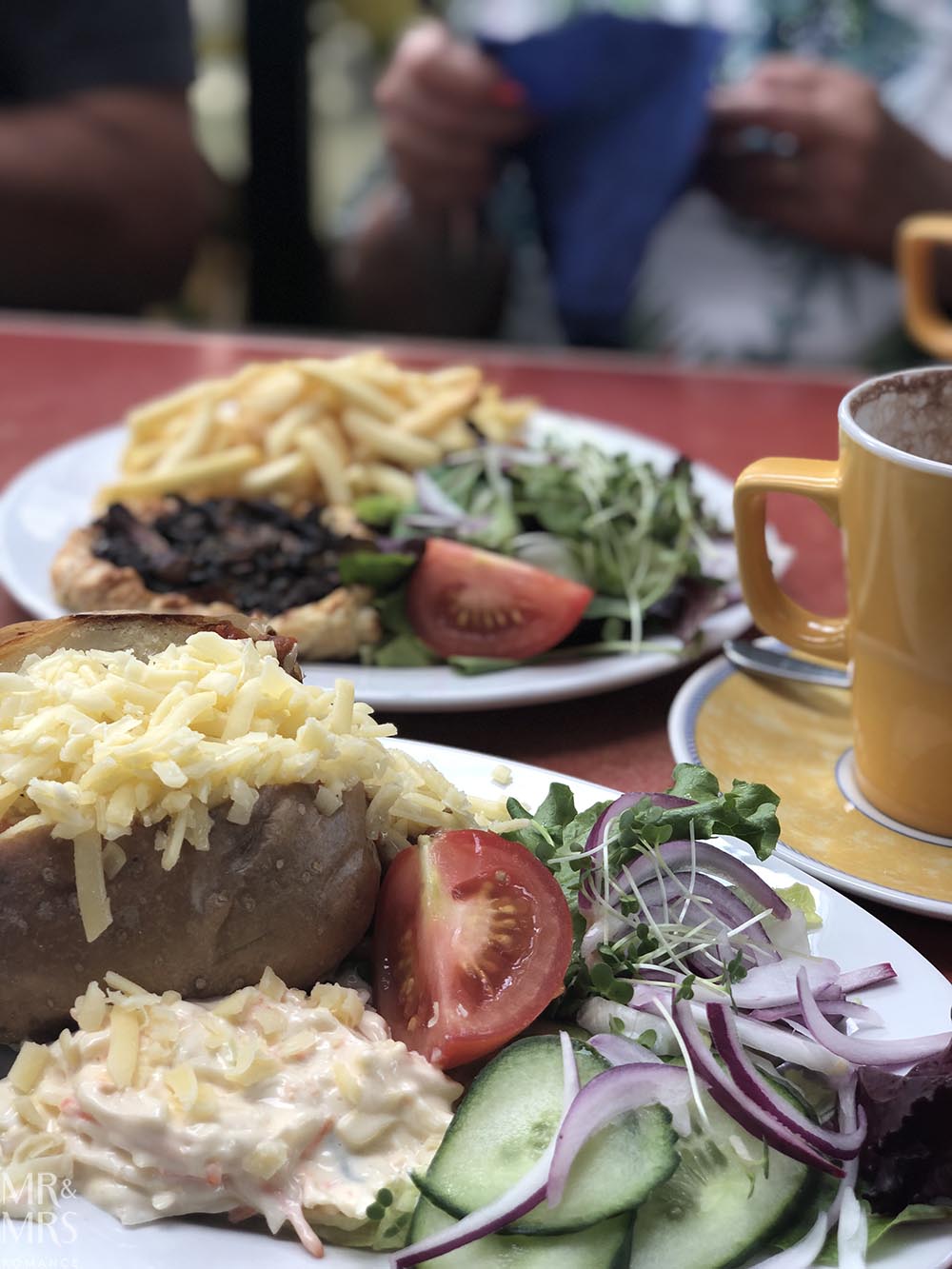 After a quick shop, we head into the cafe for lunch. My baked spud is robust and packed with filling, and the three of us waddle out of Hollow Trees feeling very full. 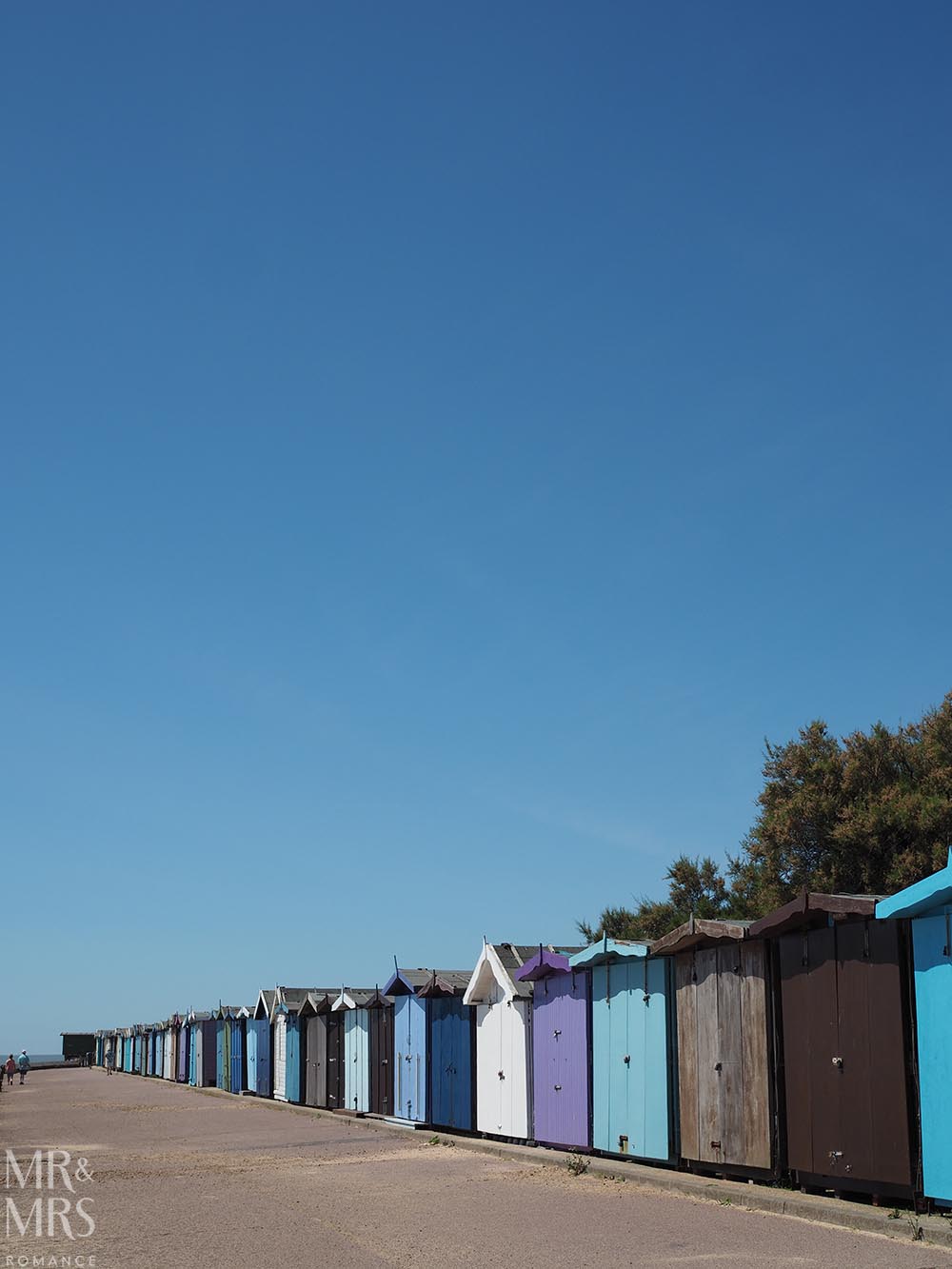 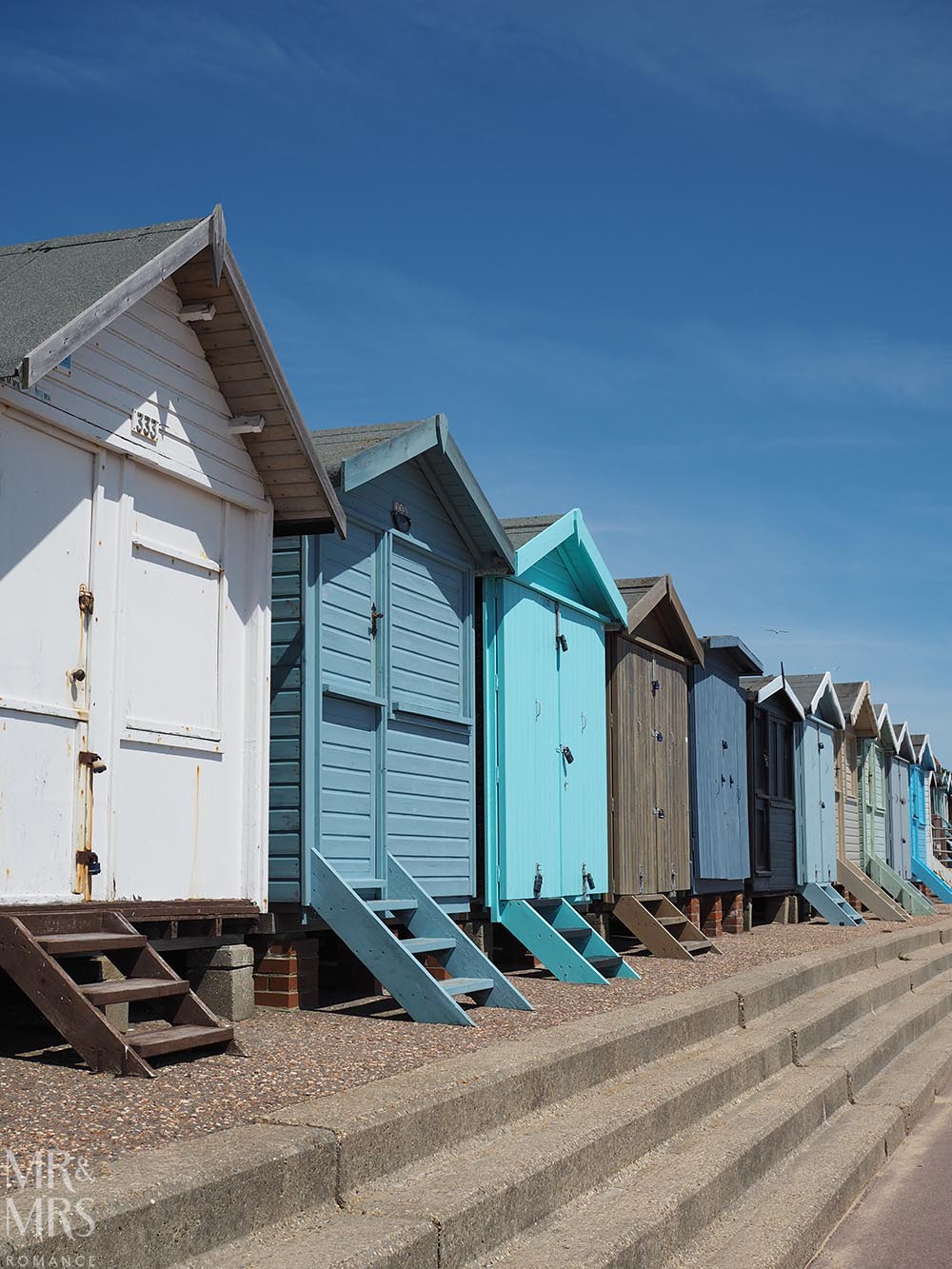 Today, Christina, Mum, Dad and I are all at the beach. Frinton-on-Sea is a little seaside town on the north Essex coast that we’ve been coming to for years. It’s a funny little town, full of strange old bylaws and locals who don’t like change much.

The upside is the town’s well-kept and quaint, and its esplanade is lined with cute beach huts. 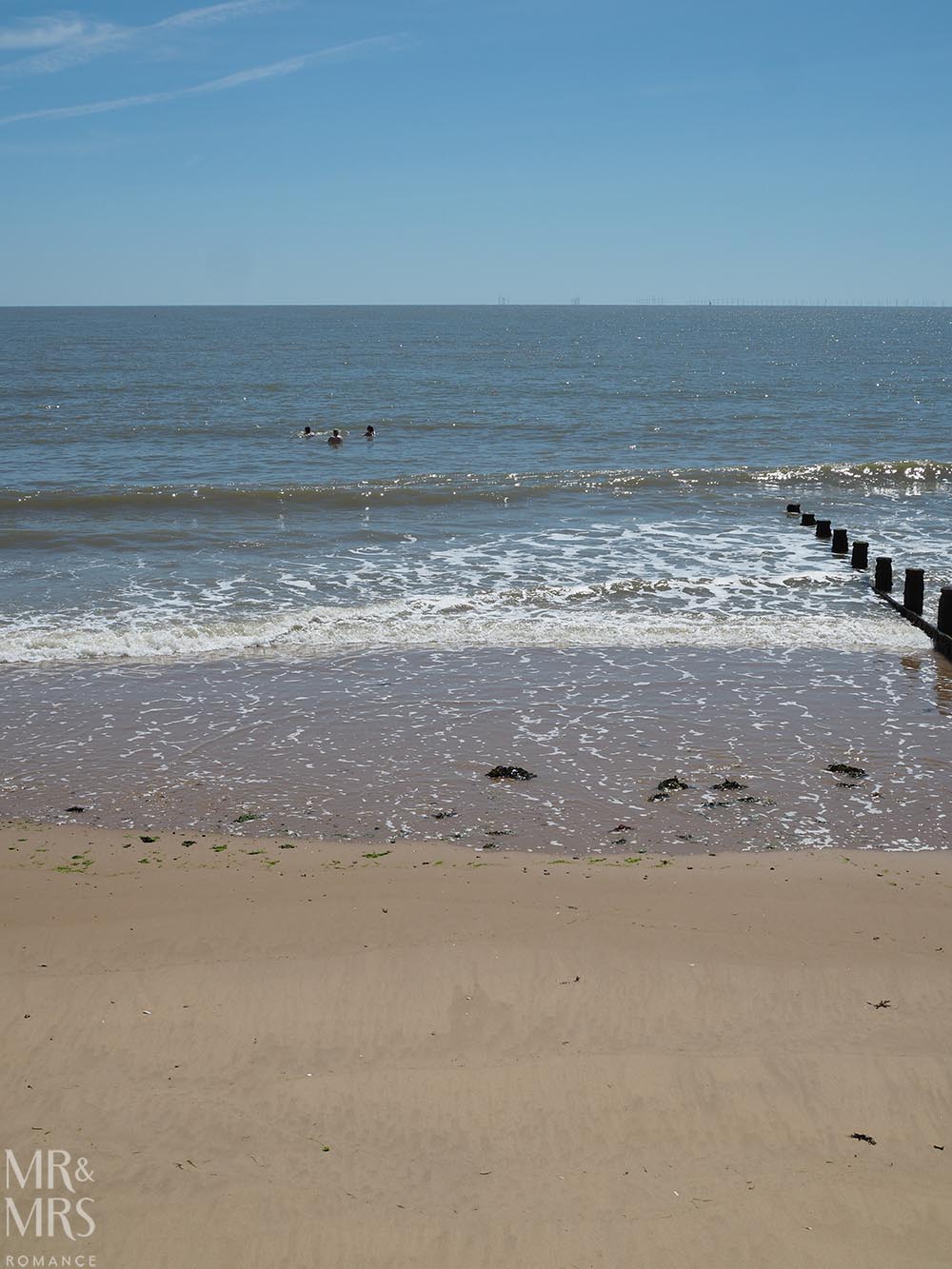 It’s midweek and early in the summer season, so lots of the beach huts aren’t in use today. The beach itself is quite quiet, though there are few people swimming and sunbathing. 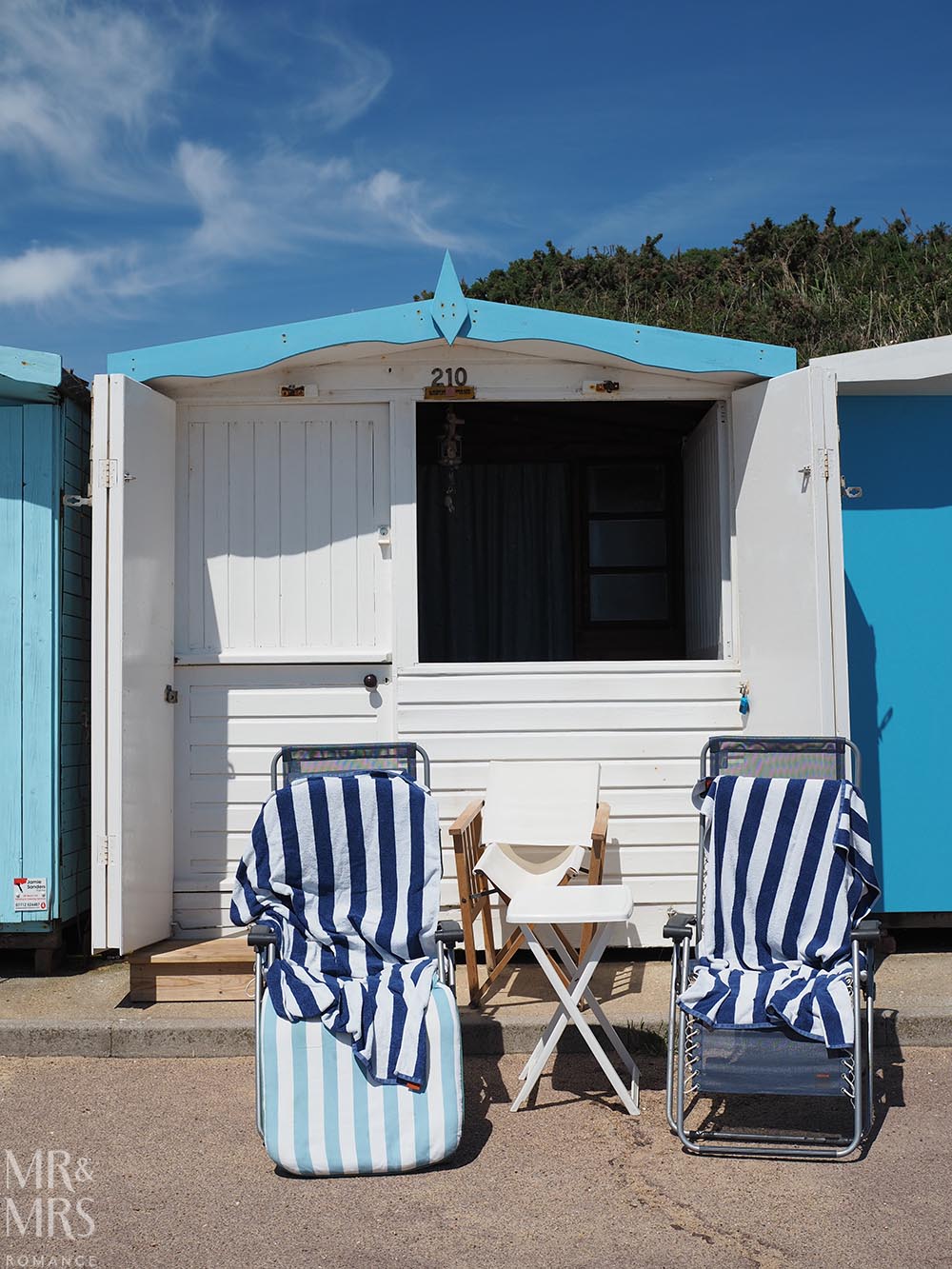 There’s something about this photo I absolutely love. Christina has taken about a million shots of the beach huts today, but this just resonates.

It makes you wonder about the people who were only just recently sat in these chairs. Where are they now? What made them get up? When will they be back? Can I get in a sneaky sit down before they are? 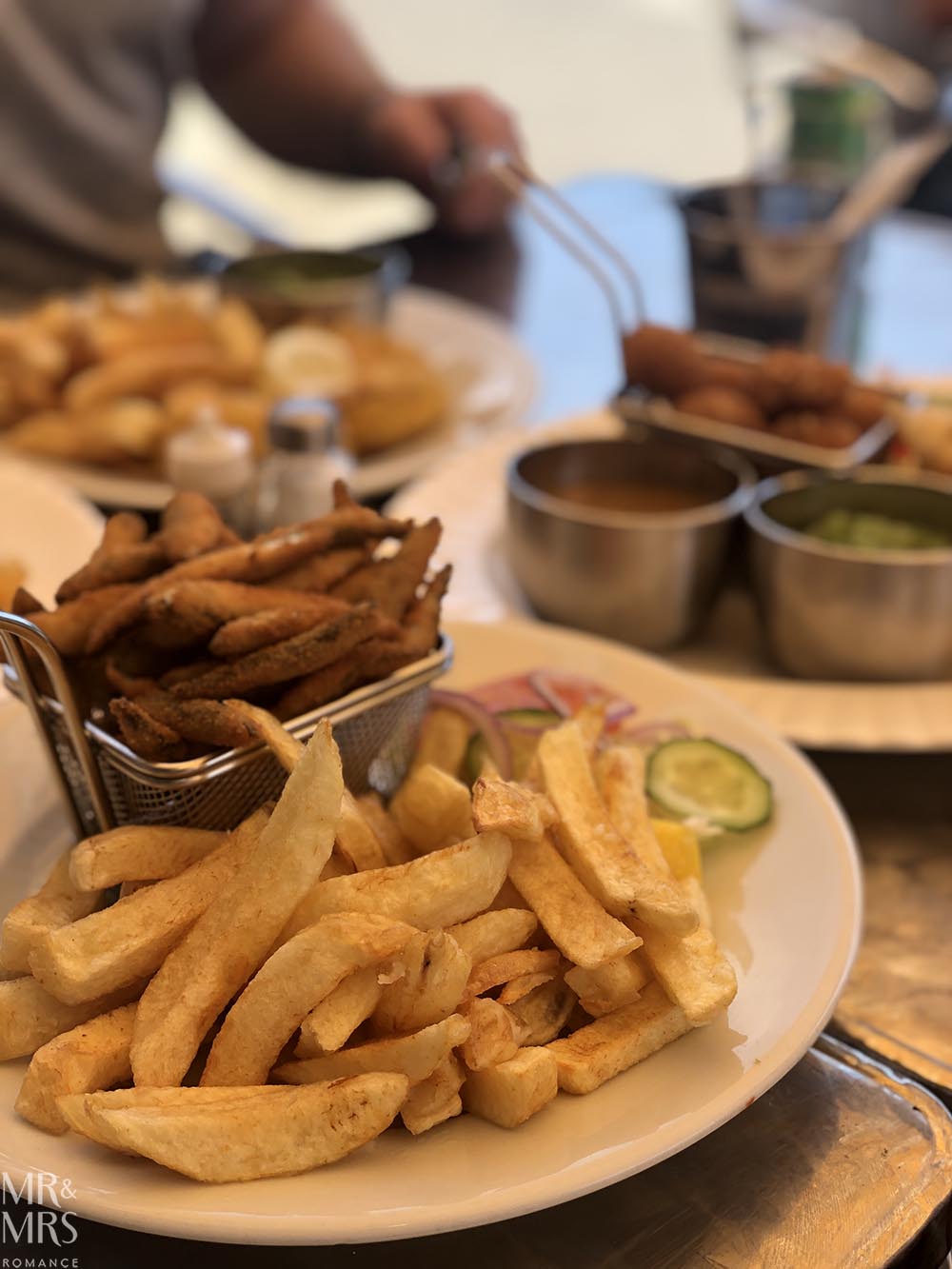 We decide it’s time for lunch. One of Frinton’s many bylaws was that there shall be no take-away restaurants and no pubs. In recent years, clever business owners managed to get around the bylaw and there is now a pub (though it’s not very nice apparently) and there is also a fish and chip shop, which is excellent.

If you ever get a chance to visit Young’s Other Plaice, do so. Service is great and the food’s delicious.

We sit outside and enjoy a meal – Christina has this pile of whitebait, Mum goes for garlic mushrooms, Dad has an enormous haddock and I have my customary cod roe. You can’t get roe and chips in Australia, so I’m filling my boots while I’m here. Love the stuff. 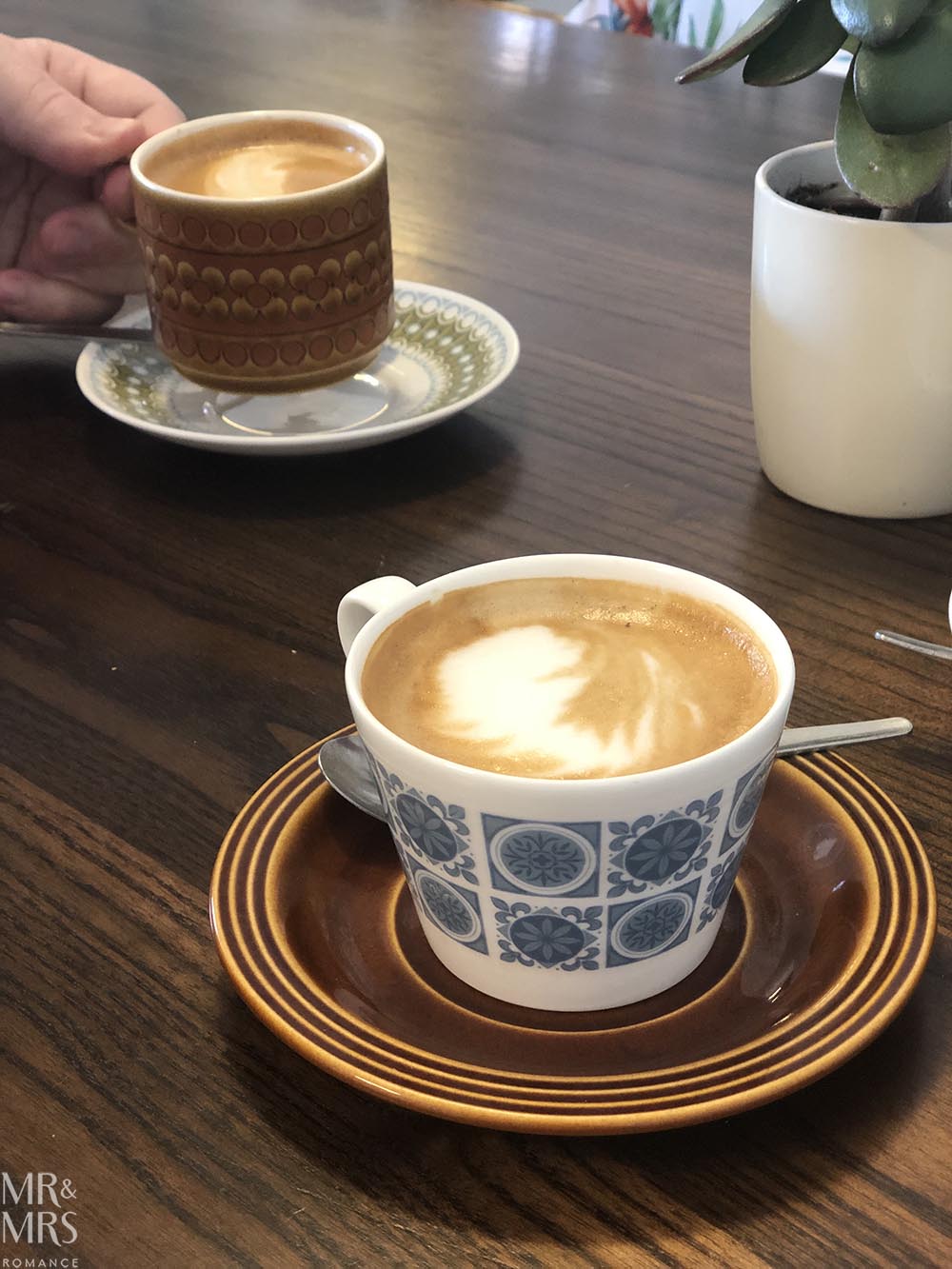 After lunch, we wander Frinton’s busy little high street and explore some of the quirky shops we find.

But we can’t go on for ever and stop in one of the cafes here for a brew. Bird and Bean is a fun little place and serves surprisingly good coffee. The food also looks great here, but we’re still too full. 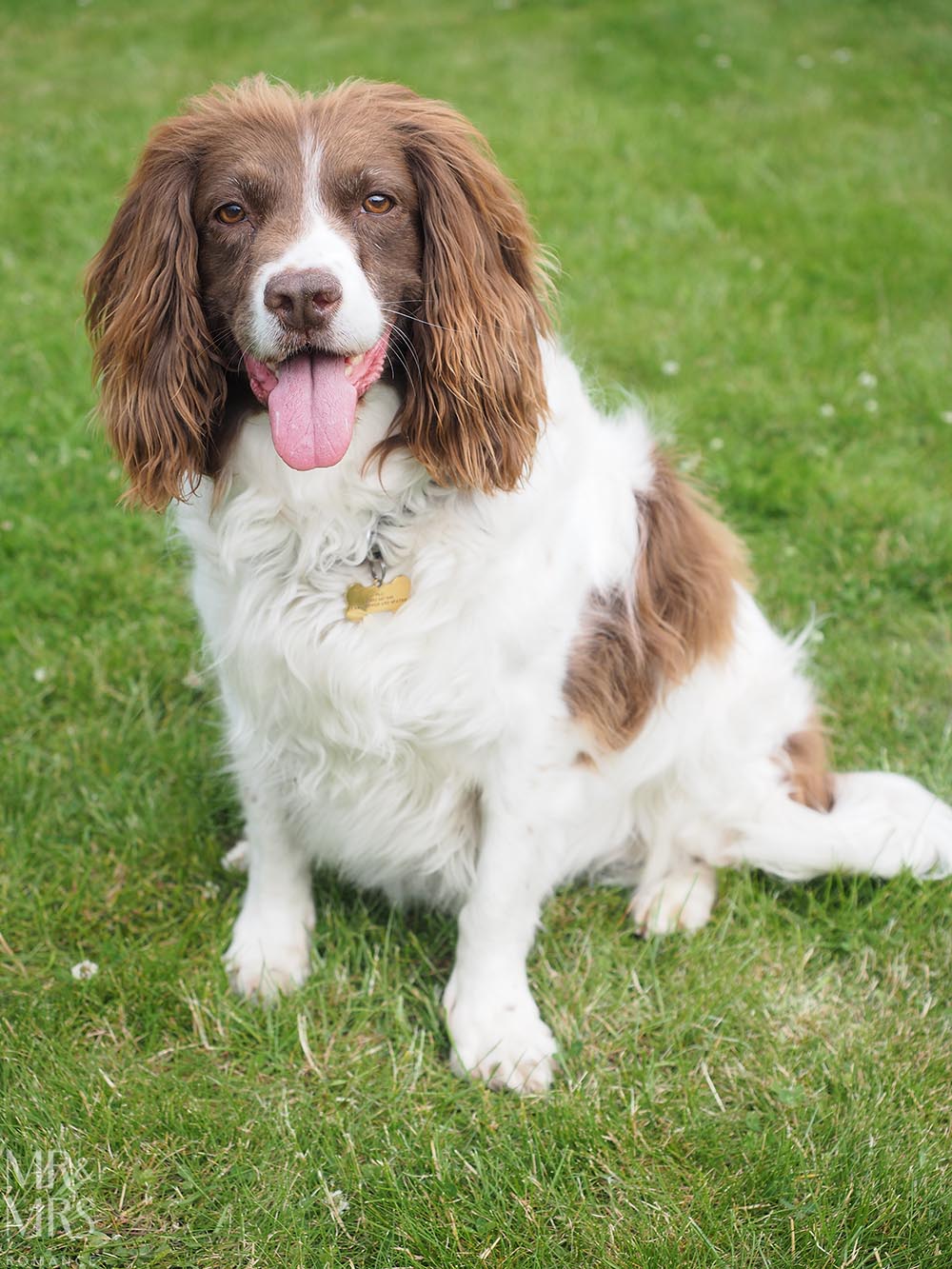 The summer’s coming on fast. Her thick coat is hot and getting hotter, so Dave’s unpacked his canine clippers. 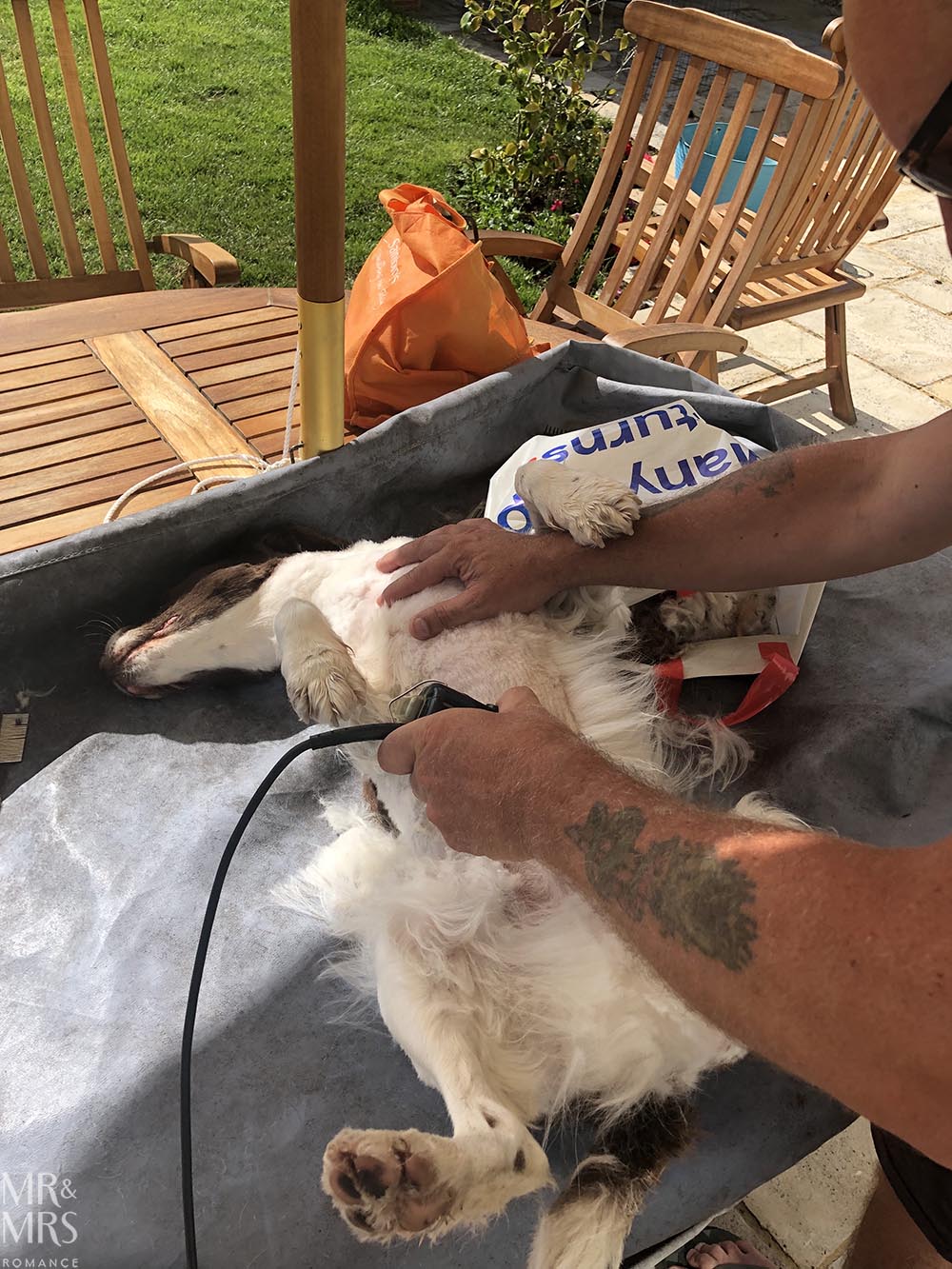 Flo’s lies back and lets Dave shave her chest and belly. As he works his way round, she doesn’t move a muscle – an incredible feat for a springer! 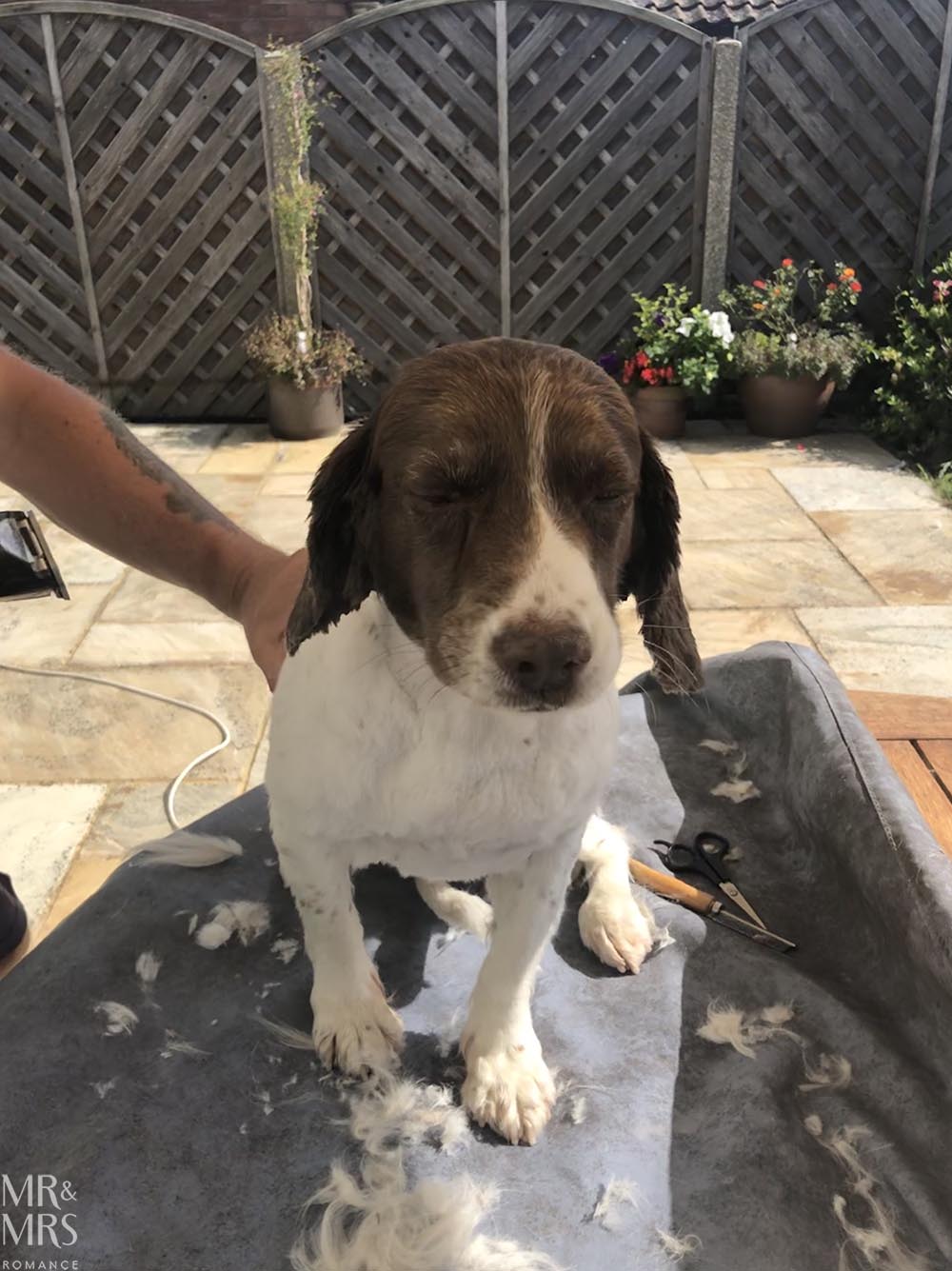 Look at that face! Flo’s in heaven – she feels like a different dog. In fact… 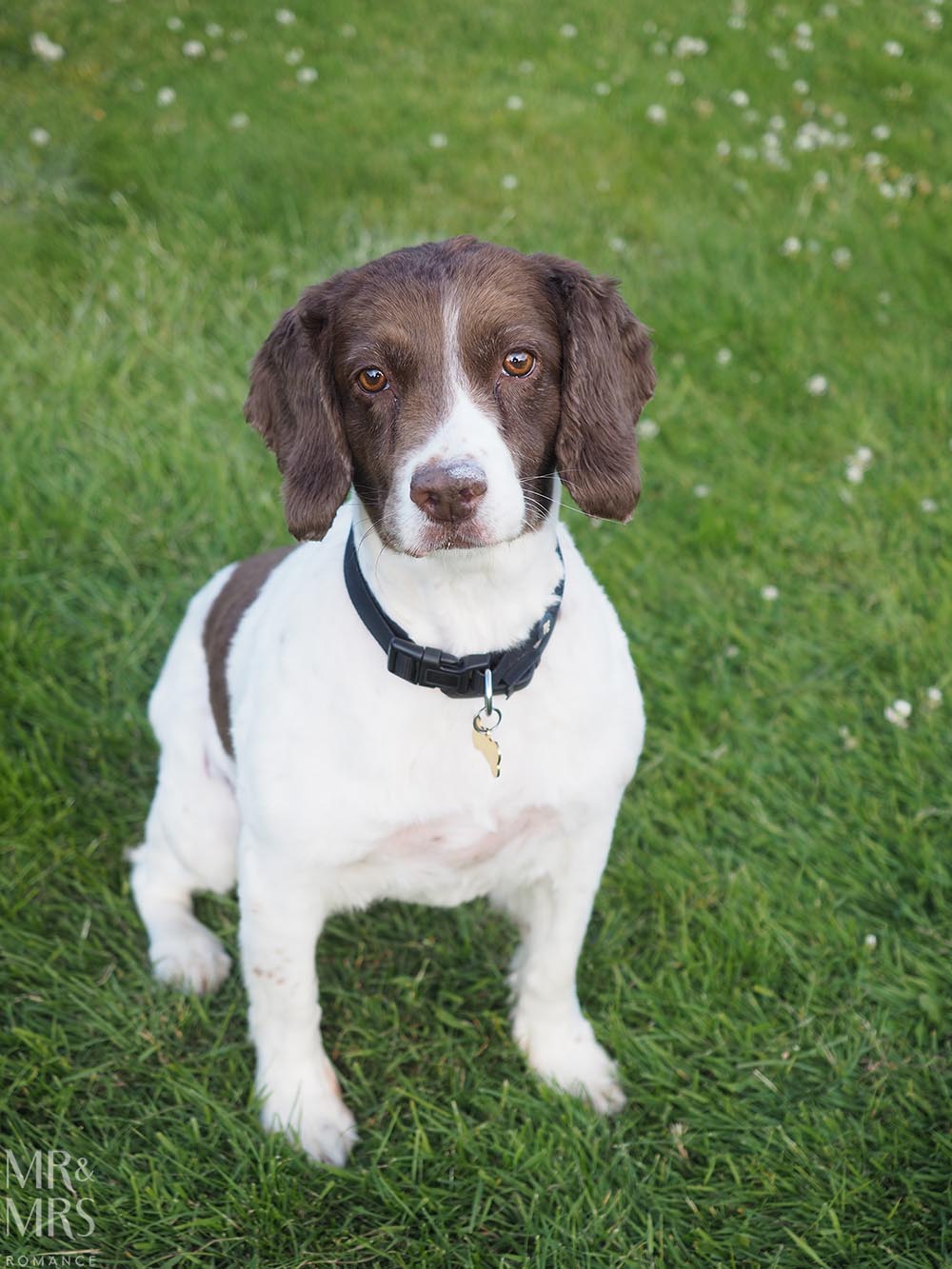 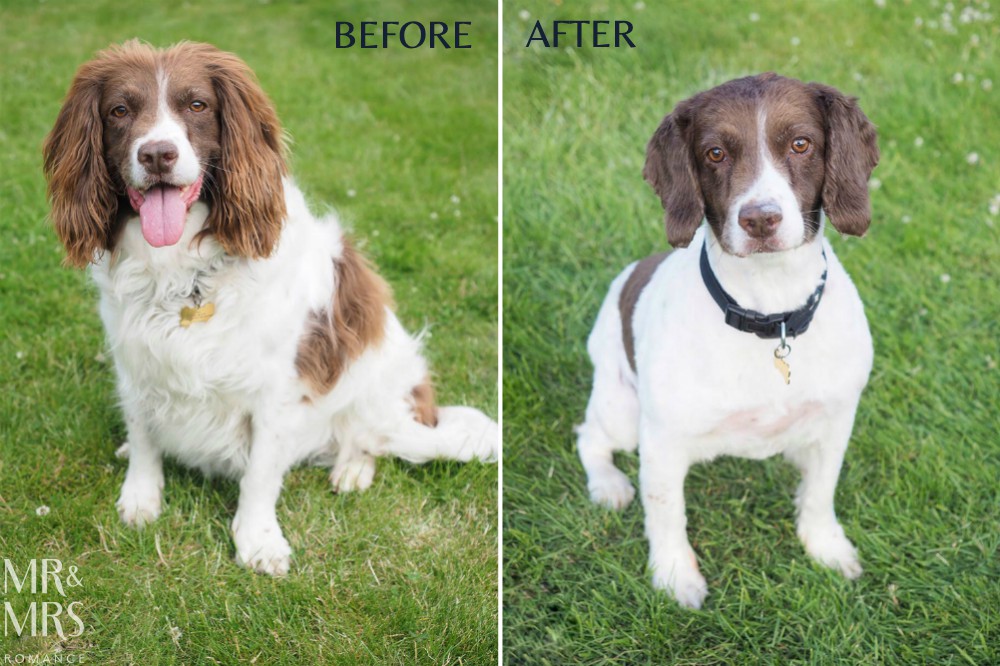 She looks like a different dog! How’s that for a before-and-after? Not only does she look 10 years younger, she acts it too. almost nine years old, Flo instantly becomes even more puppy-like than she did before her haircut.

It’s an amazing transformation – and right in time. This week is set to be one of the hottest on record. 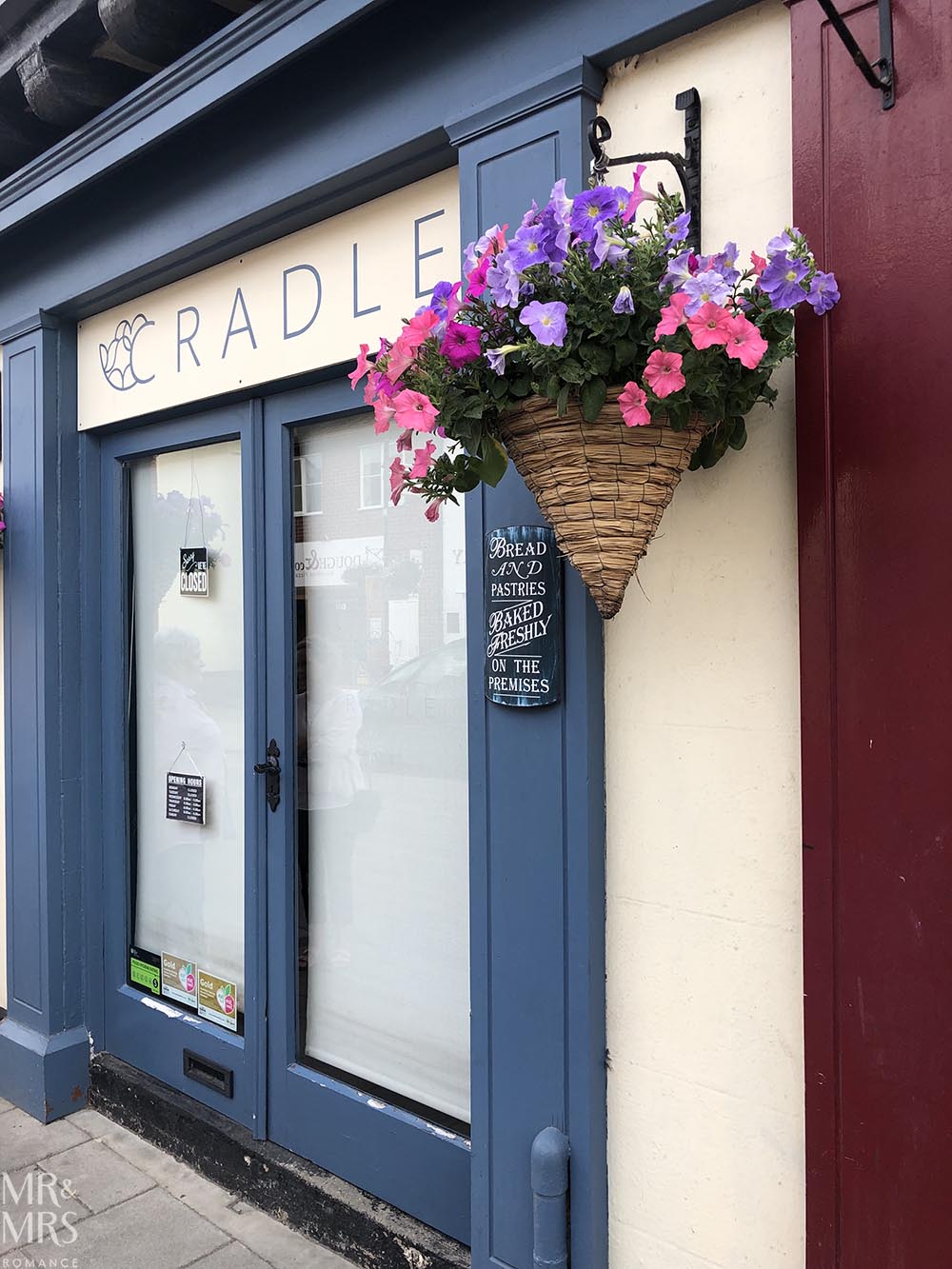 This evening, Mum and Dad have brought Christina and I to one of their all-time favourite places.

This is Cradle in Sudbury, Suffolk. It’s a plant-base and vegan restaurant, but one that also makes its own bread, pastries, nut milk, and everything else too. It’s a remarkable restaurant run by some remarkable people.

Ordinarily, Cradle is only open for lunch, but every now and again, they have special dinner events.

You can’t book for lunch – it’s a walk-in kind of deal. But dinners you have to book.

We featured Cradle a little while ago in our round up of places to eat in the English countryside. 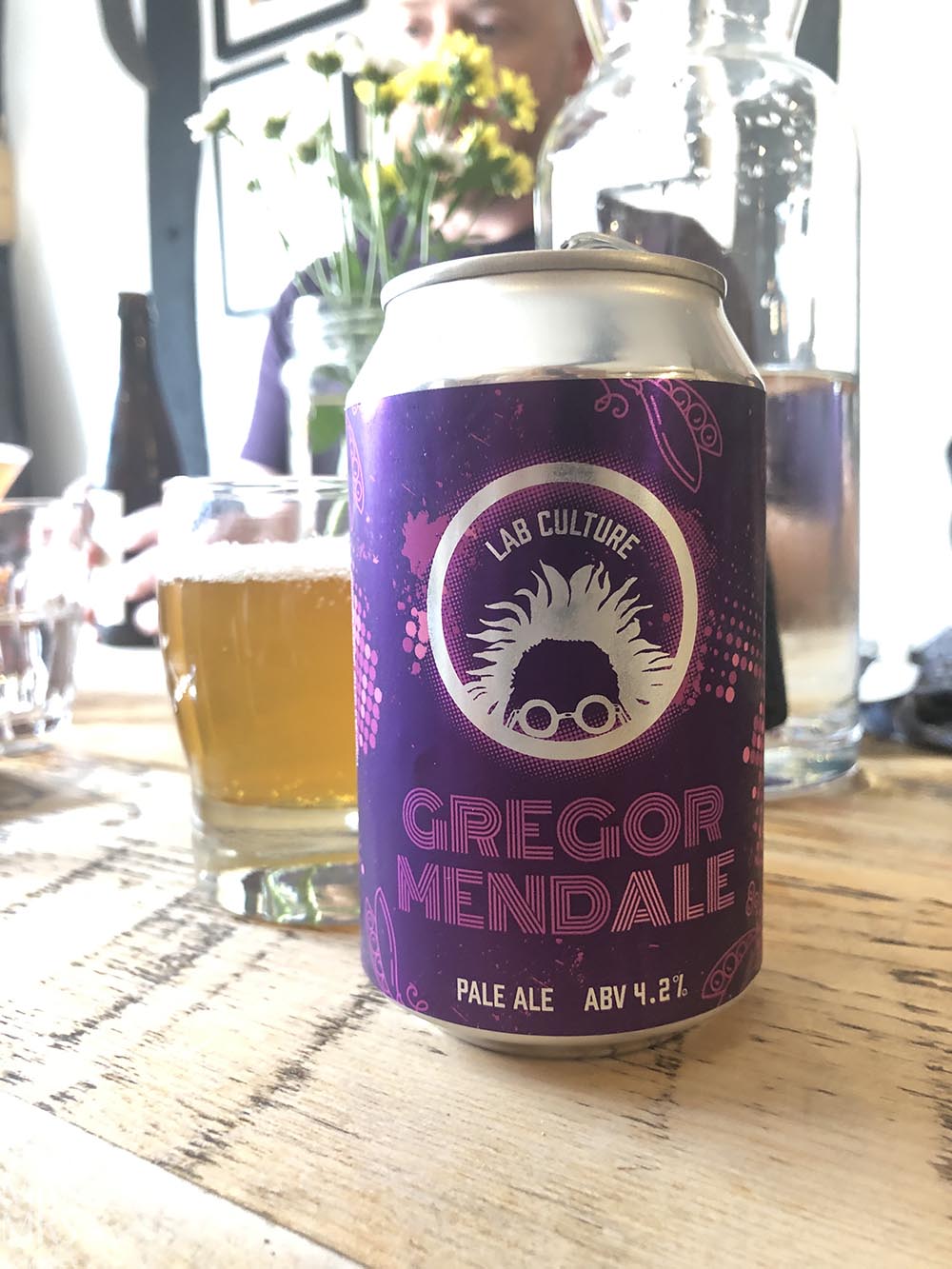 To get things started, we crack a couple of beers Cradle has in the fridge. As with everything in this restaurant bakery, the beers are from sustainably minded breweries that refuse to compromise on flavour or quality.

Gregor Mendal – a cloudy, American-style pale ale from Lab Culture Brewery in the Midlands – is full of hoppy flavour, yet crisp and drinkable. The beer’s name comes from the father of modern genetics, Gregor Mendal, who worked out the structure of genomes in peas.

Lab Culture shares Mendel’s passion for the clever use of agriculture – they brew their beer from the waste heat of a nearby vertical farm! 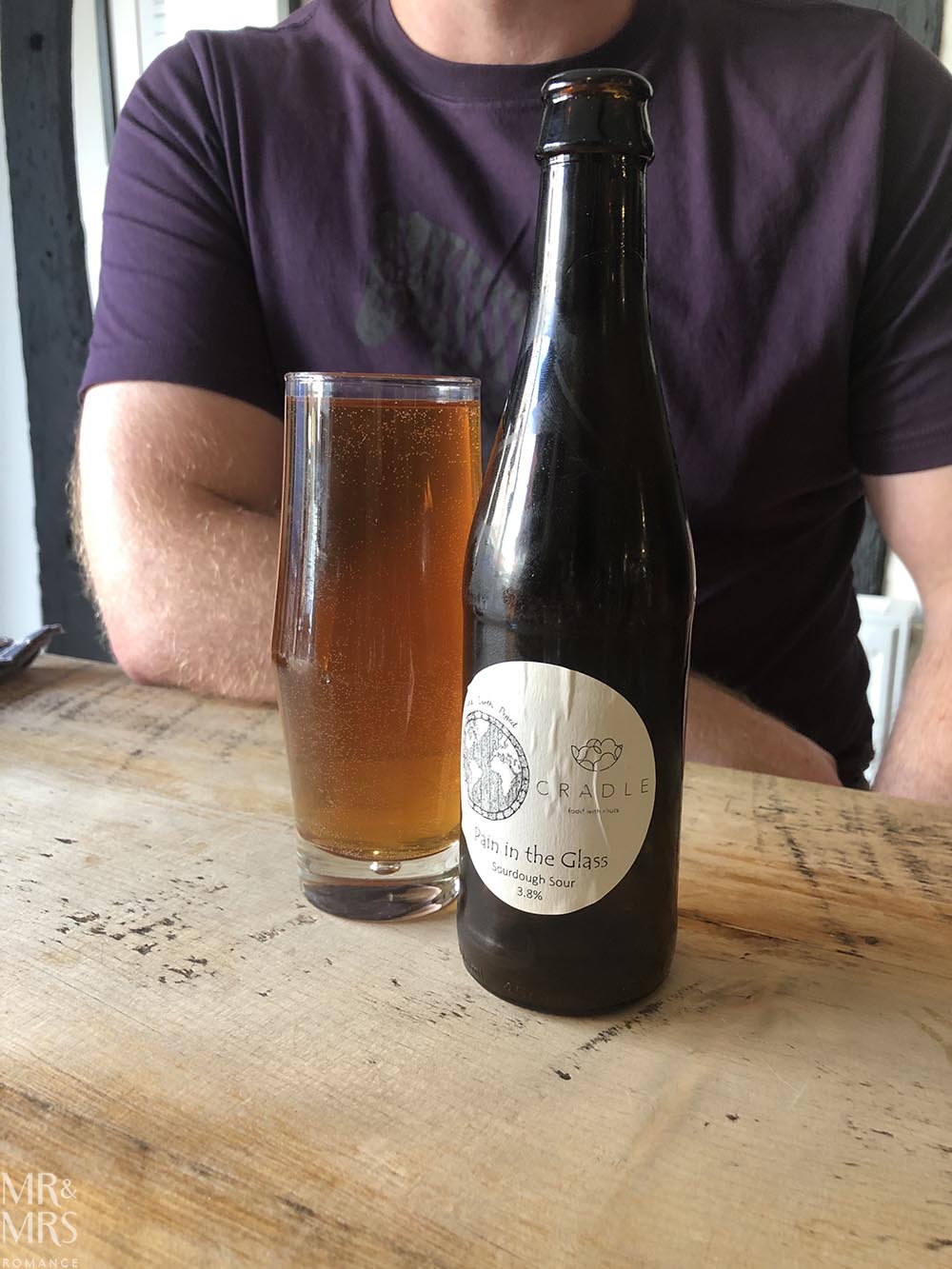 I also give Cradle’s collaboration beer a shot. Together with the Little Earth Project microbrewery associated with the Edwardstone White Horse Inn up the road in Mill Green, Cradle has created a very novel brew.

It’s a sour beer, made using leftover sourdough and starter from the bakery’s own (absolutely delicious) bread. Its name – Pain in the Glass – is right in so many ways.

Pain – being French for bread – is a nod to co-owner Christophe Vigié’s homeland. And I’m sure his partner and bread master Holly Sutton feels that making beer from her sourdough was a bit of a pain in the proverbial!

The beer itself is a work in progress, but full of promise. If you like sour beer, you’ll love this one. And there’s definitely room to amplify the bready flavour that comes through that will balance out the sourness a little.

Looking forward to trying it again. 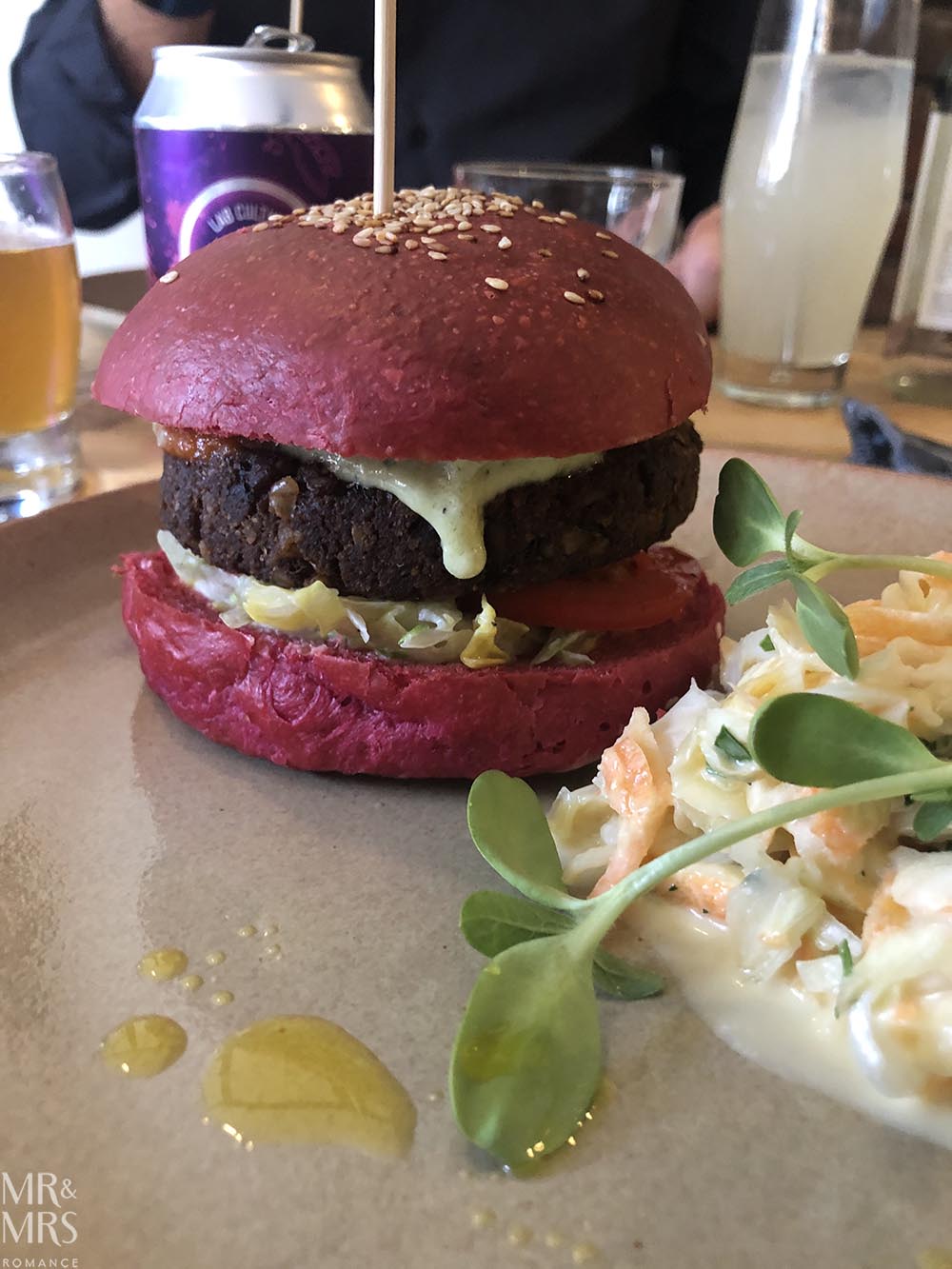 But the main reason we’re here is for the burgers. Holly, whose skills lie in baking the bread at Cradle, has crafted these amazing vegan beetroot brioche buns. They’re so vivid and deliciously soft.

The funny thing is, if this weren’t a vegan burger, I think the red buns would make the meal somewhat gruesome. But the lack of meat or animal products on the plate allows the buns to give colour and fun to the dish.

Holly makes all the bread for the bakery. Her sourdoughs have become local legend, which is only fair as they are about as local as you can get.

Cradle mills its own flour and only uses Maldon salt, made 25 miles down the road (and our favourite salt too by the way).

The burger itself – a mushroom and walnut patty – with crisp lettuce, tomatoes, pickles and a vegan Boursin style cream cheese that gives the impression of melting is a very intelligent dish. And filling too.

The question is, will there be enough room for dessert? 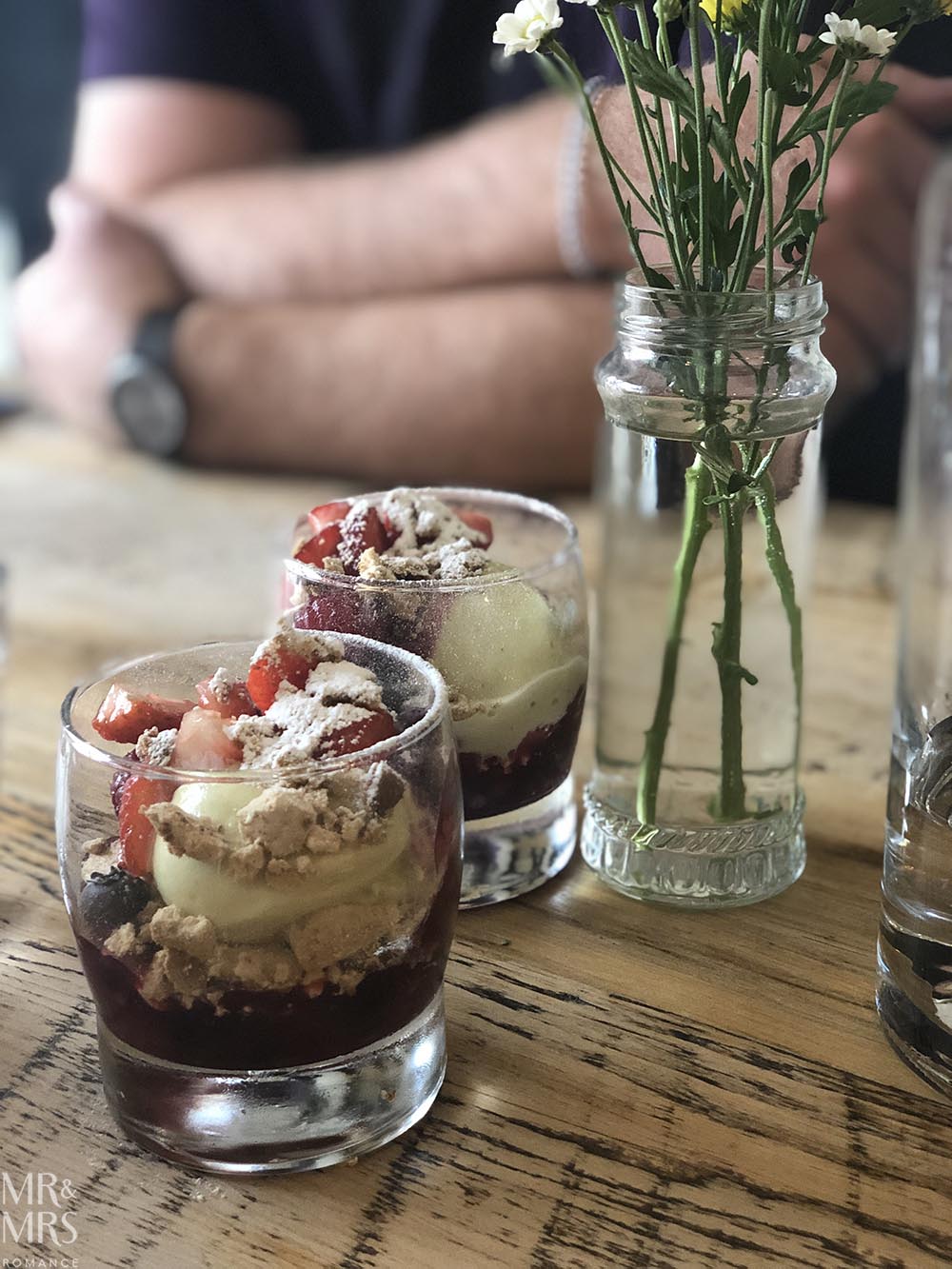 Yes. There’s room. But only one between two! The Eton Mess Cradle crafts is rich and delicious. Foraged berries, crunchy meringue, vanilla ice cream and a berry sorbet fills the pots and then our stomachs to bursting point.

It’s another of Christophe’s creations that puts Cradle in a unique position. With Holly’s expertise in the bread department and Christophe putting his extensive professional cheffing skills into practice, It’s little wonder Cradle is so good.

Christophe has worked all over the world for prominent venues under names like Michel Roux and Jean-Christophe Novelli, and made a name and craft for himself in pastry and desserts. It makes sense that he and Holly have carved their niche in the world with a place like Cradle.

We’re just lucky that Mum and Dad found them. 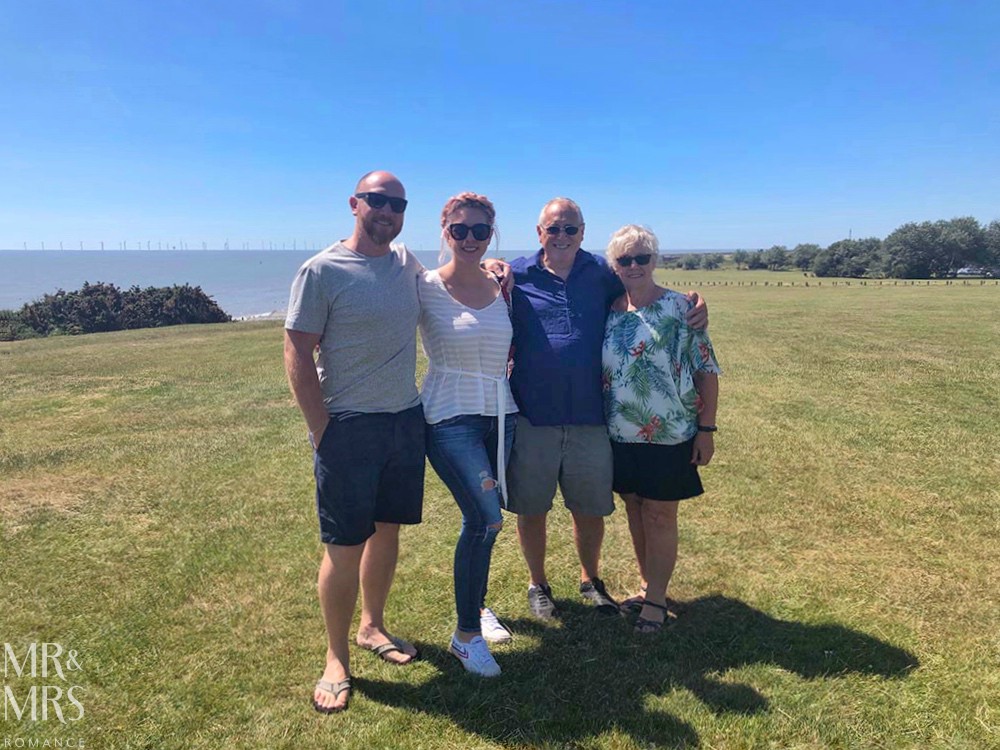 Here’s to many more trips full of tales and forays filled with food.

How much fun was our 30 Cocktails in 30 Days Challenge? No, really. I’m asking because I can’t remember. Just kidding. It was a…