With so much wonderful food and wine coming from New South Wales, it’s a wonder more Sydney restaurants and bars aren’t serving local produce. One French bistro right in the heart of the city has taken up the banner and is championing the flavours of NSW with its new menu. 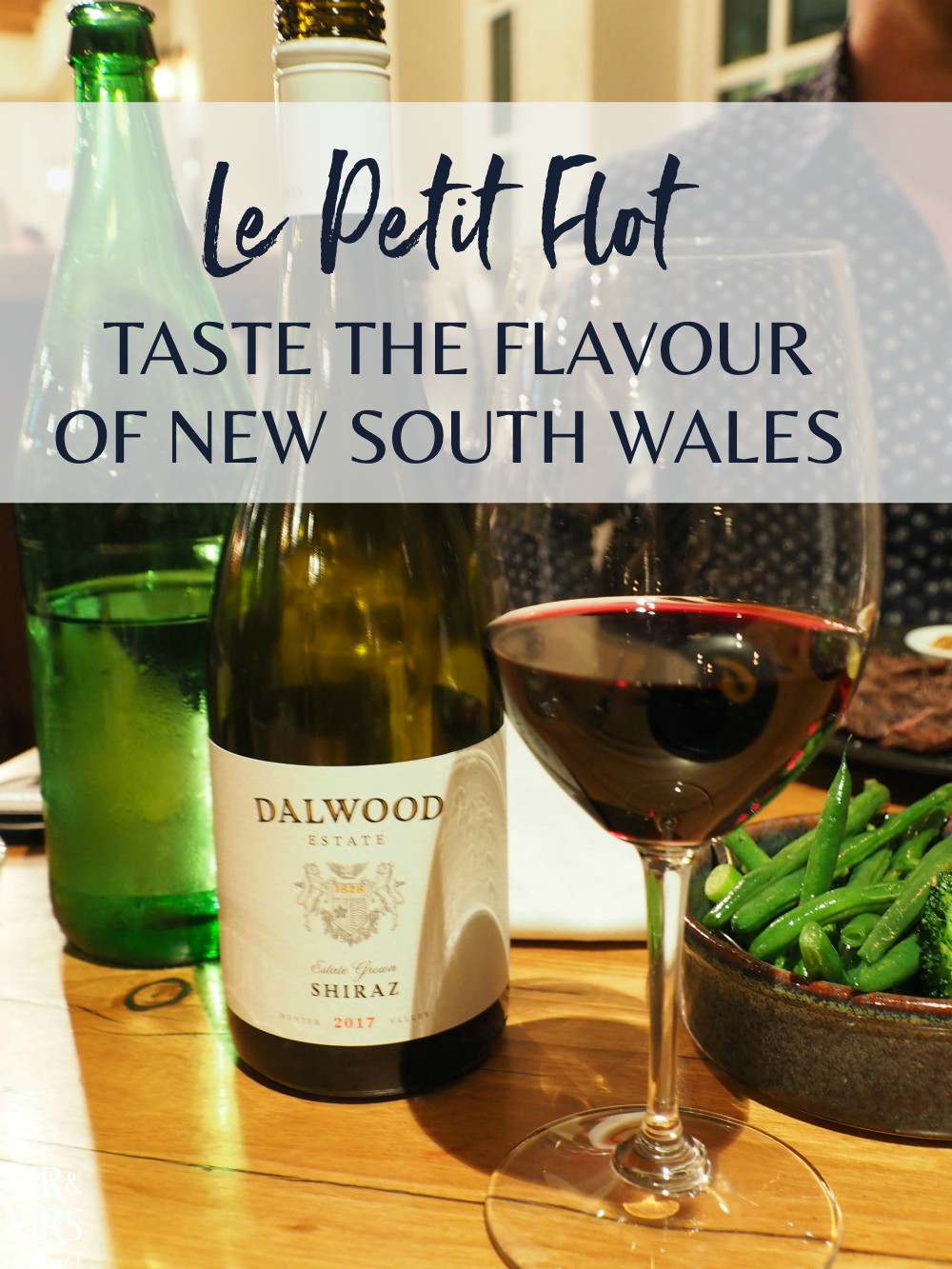 Hidden amongst the offices and busy streets of Sydney’s CBD, the Tank Stream Hotel and its discreet bistro Le Petit Flot – ‘the little stream’ in French – are above one of the most historically significant points in the city, perhaps even the whole country.

Beneath the hotel, next to Australia Square, runs the course of what was the sole freshwater source for the 1788 colony: The Tank Stream.

Without this supply of potable water, the colony would never have survived.

Since then, the Tank Stream has all but dried up, but above in the Petit Flot, the wine flows freely.

And it’s wine with provenance. 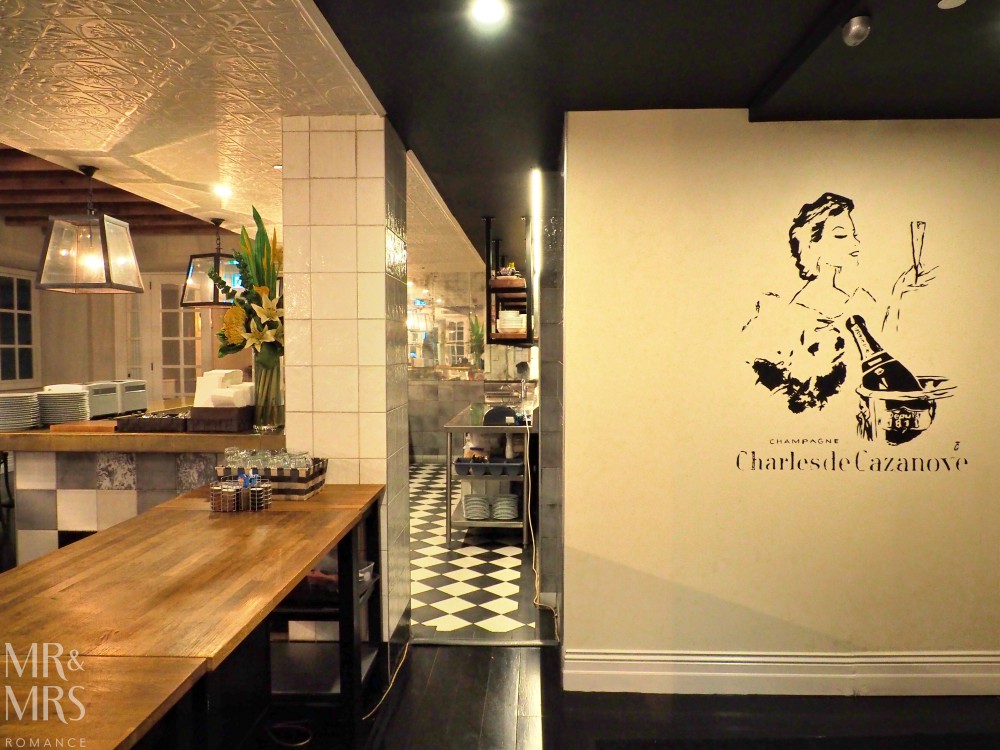 Up the curving stairs from The Tank Stream Hotel’s reception and overlooking Australia Square, Le Petit Flot’s comfortable yet elegant dining room doesn’t feel like a hotel restaurant at all.

For a start, there’s no hint of club sandwiches, burgers or Waldorf salads anywhere. All in all, it’s very French – as a bistro should be. Though Executive Chef Colin Yee has had his say in a few Japanese styles and flavours, which complement the overall composition well. 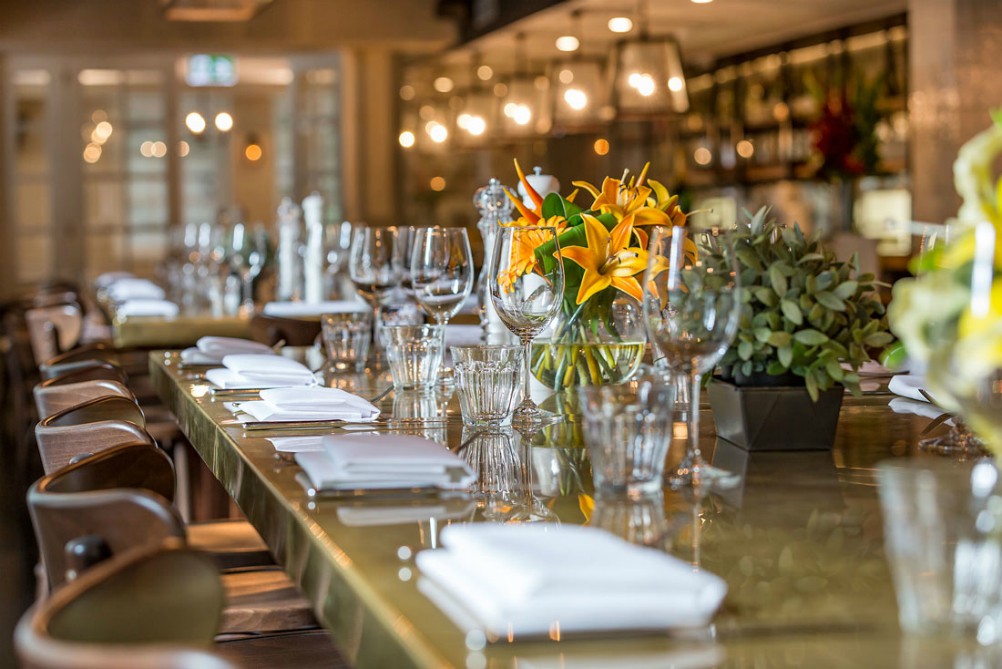 But starting with the wine, this little restaurant has crafted a menu with a difference, shining a light on local, and giving visitors and residents alike the chance to literally get their teeth into produce from right here in New South Wales.

Let’s start with the Semillon

To go with entrees of whitebait, saikou salmon and beef carpaccio, we had the Sweetwater Semillon from the Hunter Valley. It’s a wild-fermented wine with citrusy, herbaceous notes and beautifully balanced texture – the epitome of the Hunter’s darling.

Although this Semillon is paired with the kitchen’s confit chicken breast from the Southern Highlands, we did enjoy it with the dishes we chose. 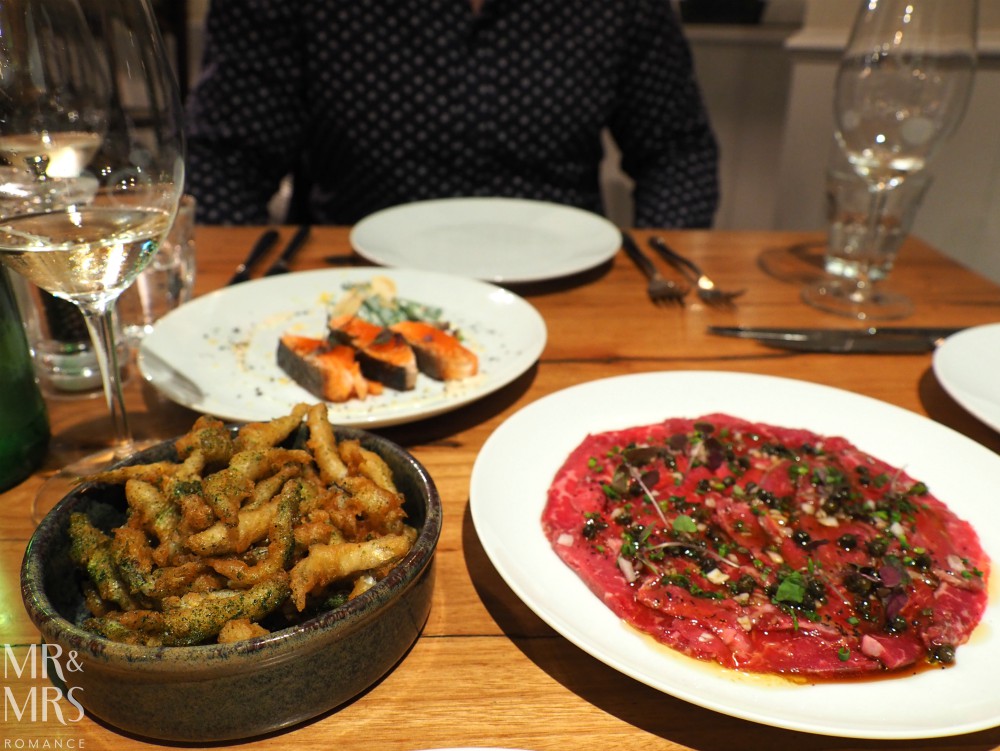 The whitebait here is splendidly crisp and light, and perfectly seasoned. The salmon, which is high in omega-3 fatty acids from a wild, constant-swimming environment, is rich with a delightful crunch of crisped skin. The beans it comes with are dressed with a light yoghurt and slivers of roasted almond.

The carpaccio is incredible. Hand-sliced to a point where it’s almost translucent and served with crisp capers, chives and a delicate olive oil. Superb. 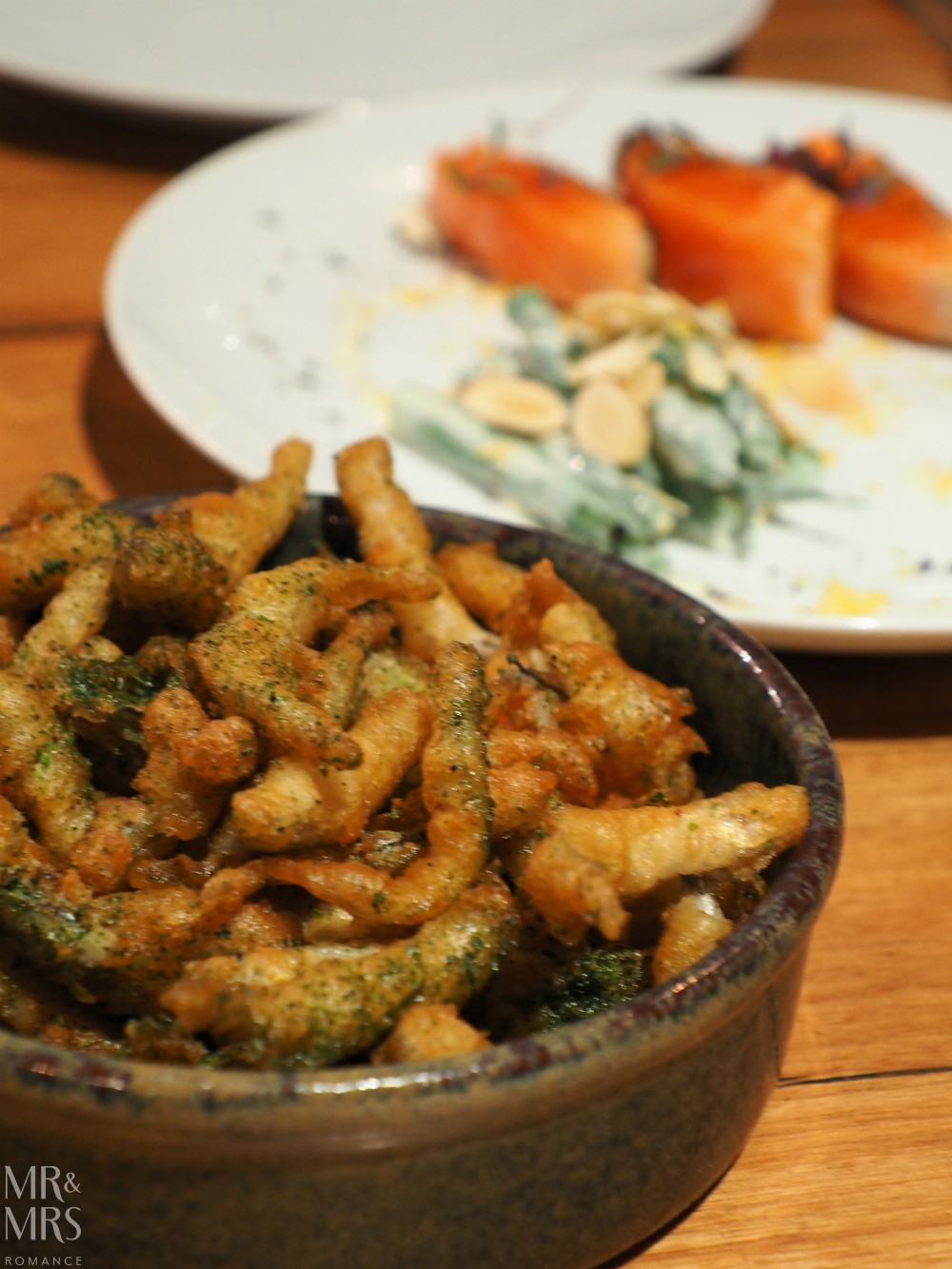 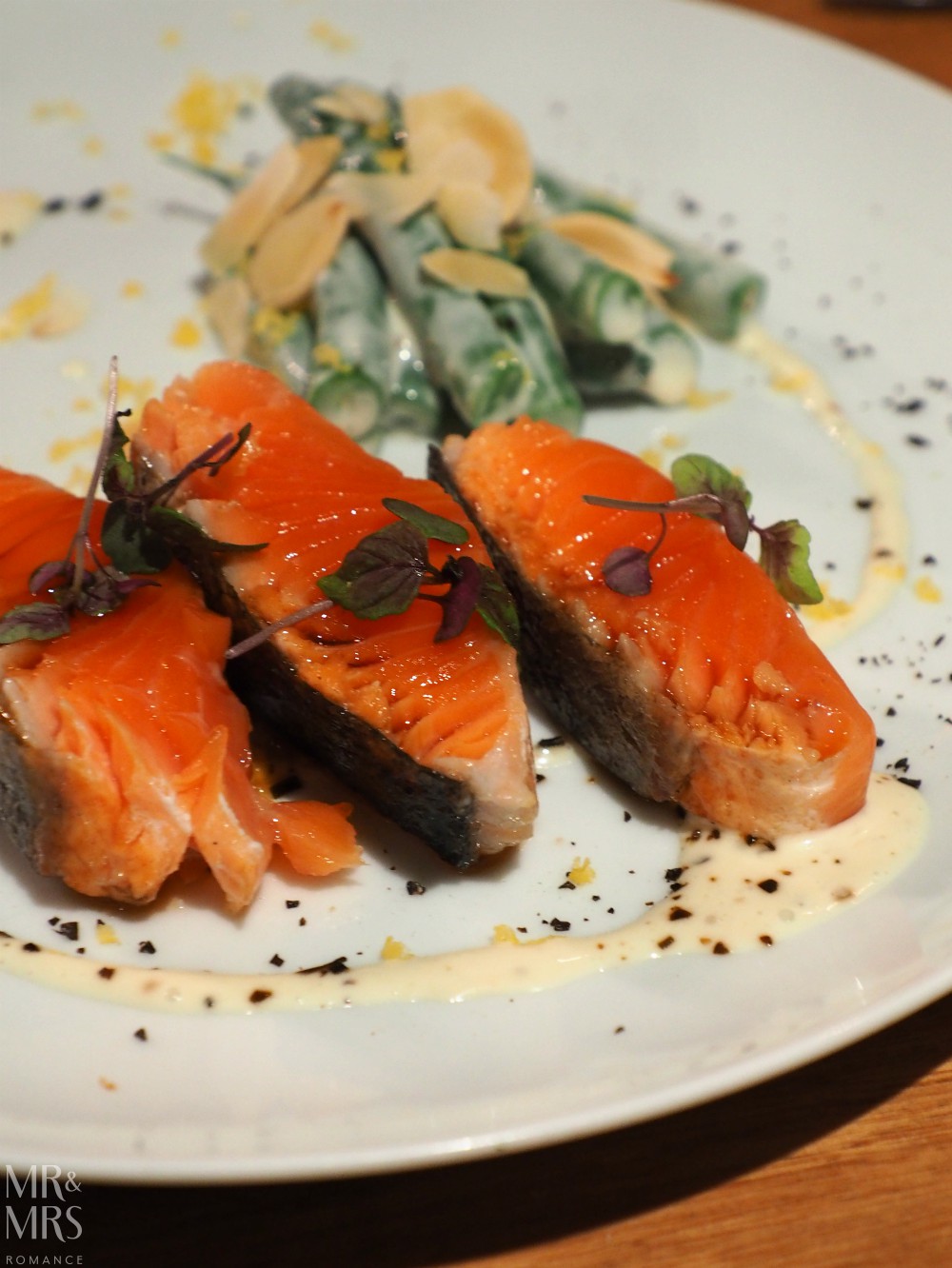 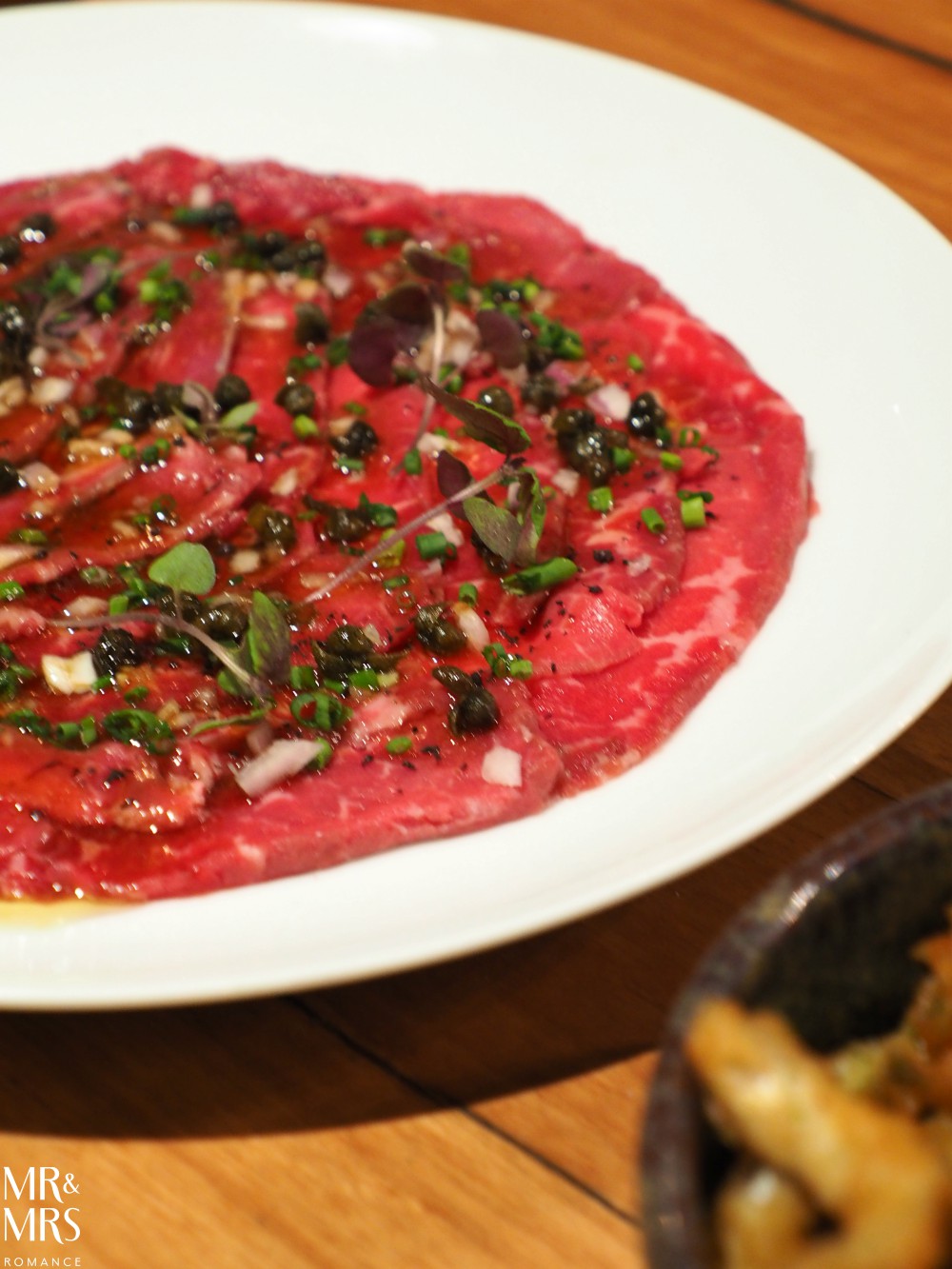 There’s a poetry to the choice of NSW Shiraz at Le Petit Flot. Dalwood Winery in the Hunter Valley is Australia’s oldest wine brand and is therefore the birthplace of Hunter Valley wine.

Dalwood has crafted premium wines in the Lower Hunter Valley continuously since 1828, and the Shiraz is a fine paradigm of this long-standing winery. Its deep, rich colour, gentle spice and balanced tannins work well with the wine’s medium-to-full body and an almost savoury finish. 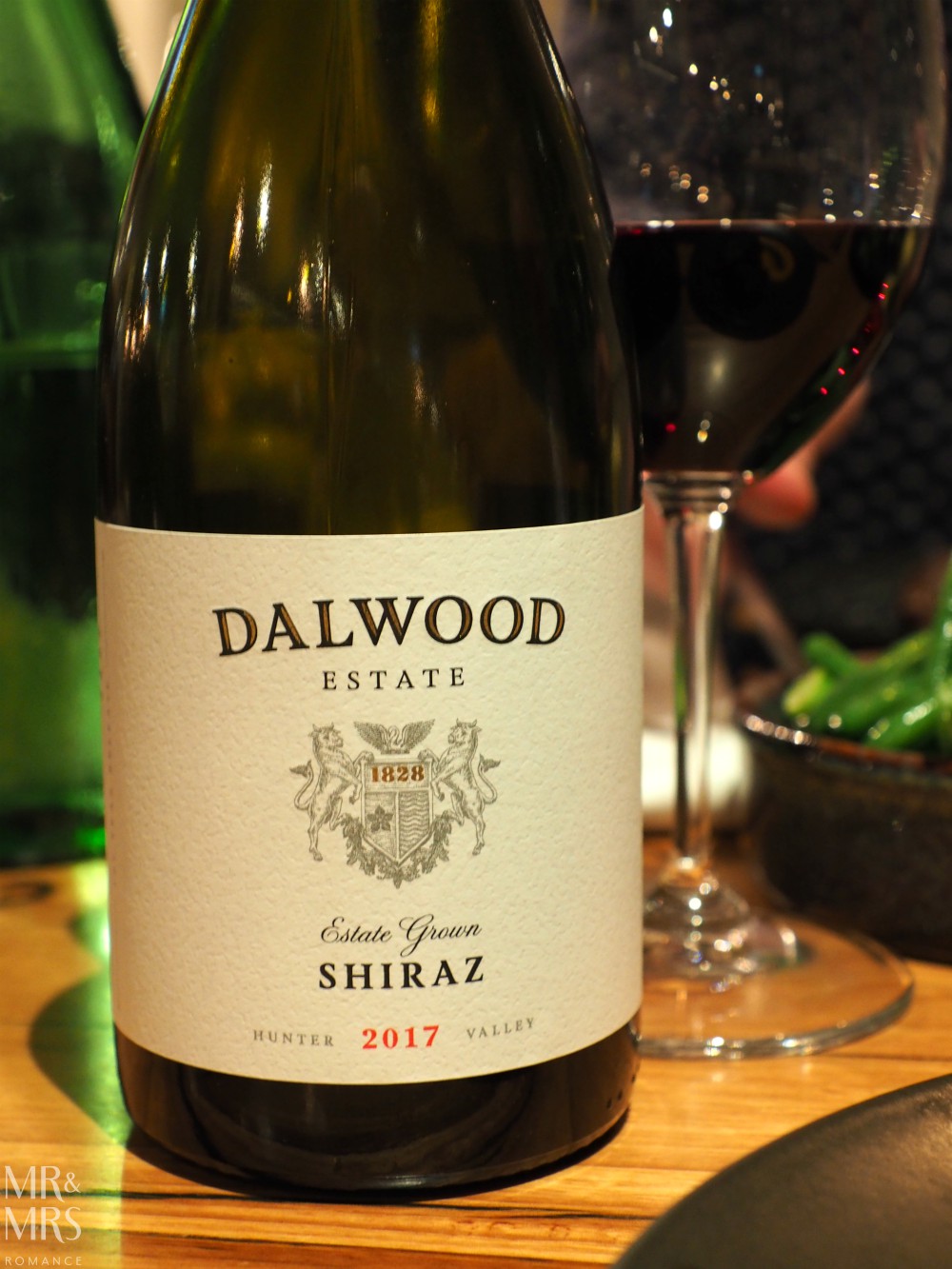 My 5+ marble wagyu rump steak (cooked rare) is the pairing recommendation for the Dalwood Shiraz. It’s from Carrara in the Northern Rivers of NSW and it melts in the mouth as if it’s not even there. I’ve never tasted a steak – especially rump – quite like it.

The red wine jus and wholegrain mustard the steak comes with are an ancillary but generous touch. 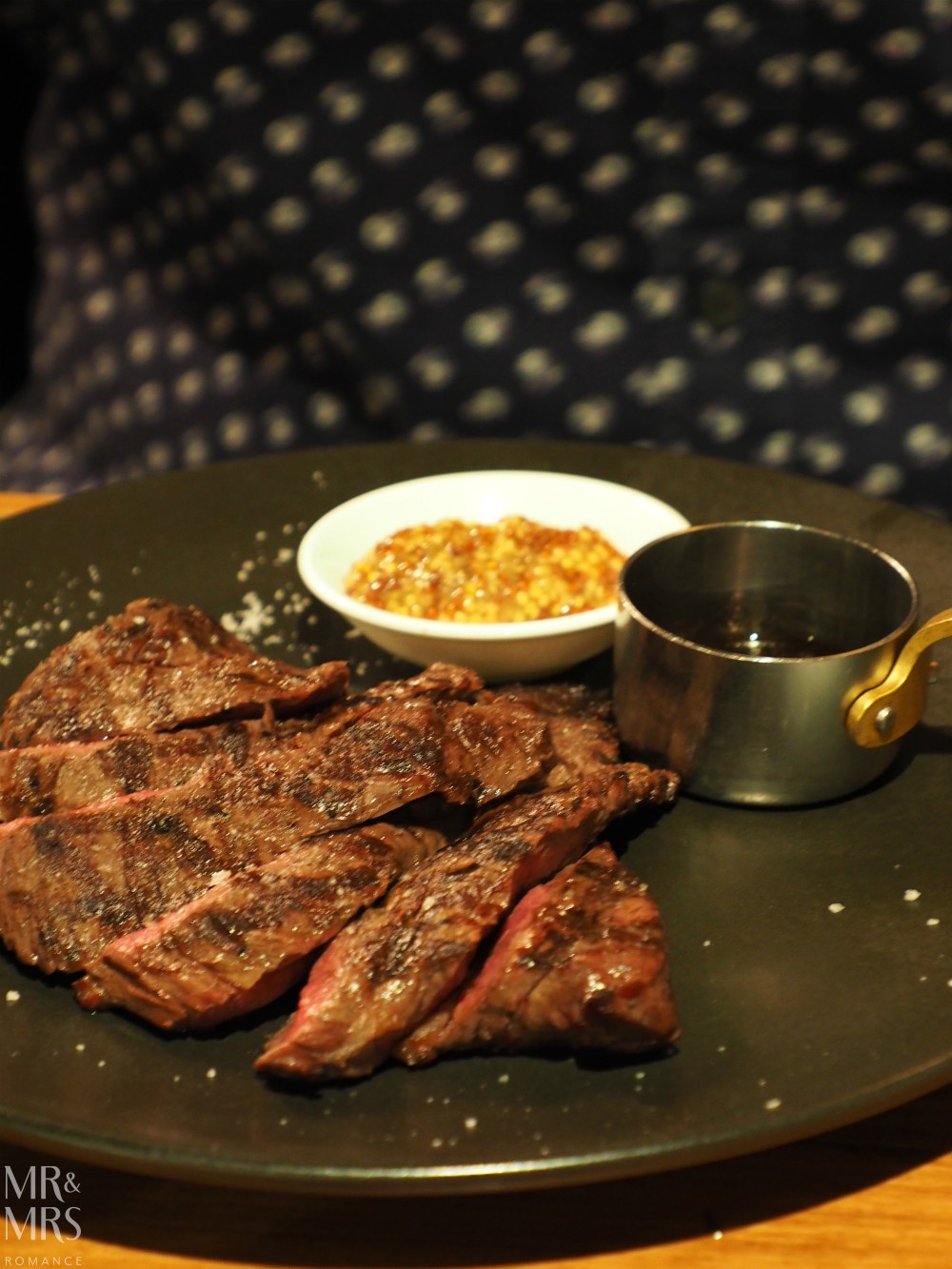 Christina’s braised beef cheeks, with a red wine miso and carrot puree, are sublime. Tender, rich, dense and packed with sumptuous flavour and also well-matched with the Shiraz.

Our friend Peter’s grilled half-rack of lamb, which is from Junee in the Riverina, NSW, looks tender and perfectly cooked. This dish is paired with an NSW Cabernet Sauvignon, but I think the Shiraz still works. Peter’s not complaining anyway! 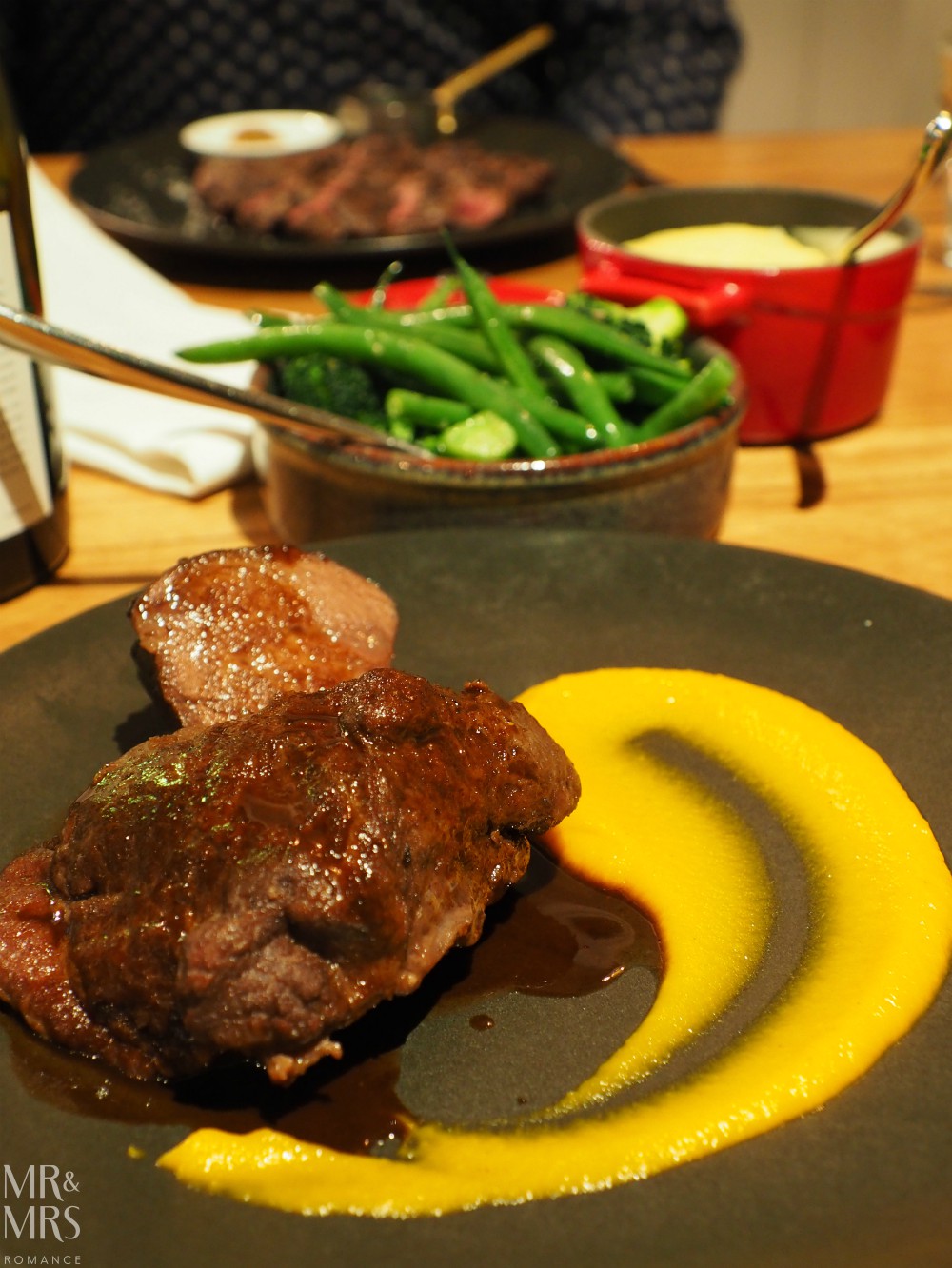 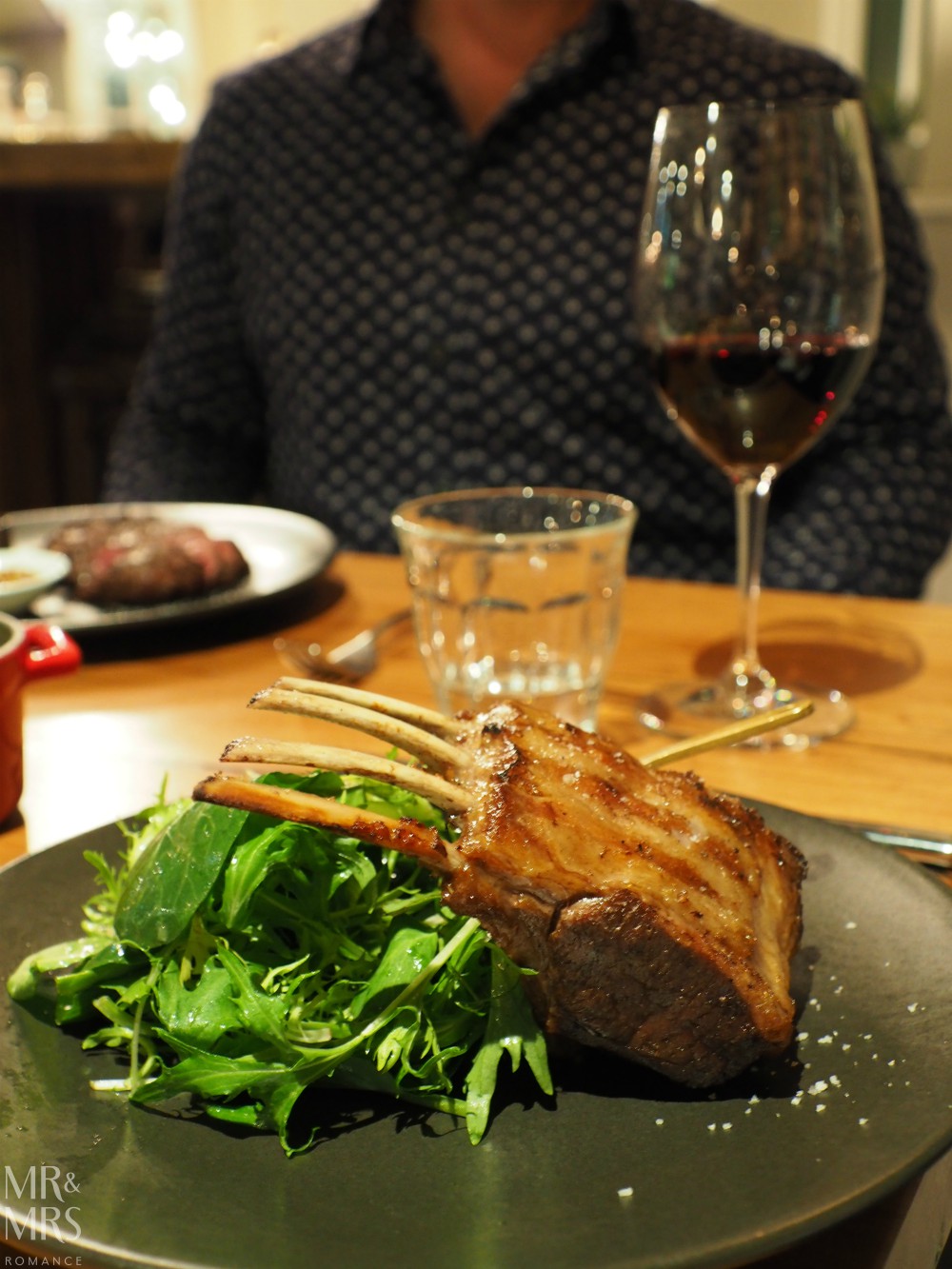 We also get a side of fresh green beans and the creamiest, richest mashed – sorry, whipped potato you’ll ever taste. It’s an extravagant meal with superb wine; a showcase of what this state has to offer our plates and glasses.

And how’s the the Cab Sauv?

To finish off, we have a final glass of wine: the Cab Sauv that’s paired with Peter’s lamb. It’s from Hungerford Hill Winery in the Hunter Valley and is delicious. 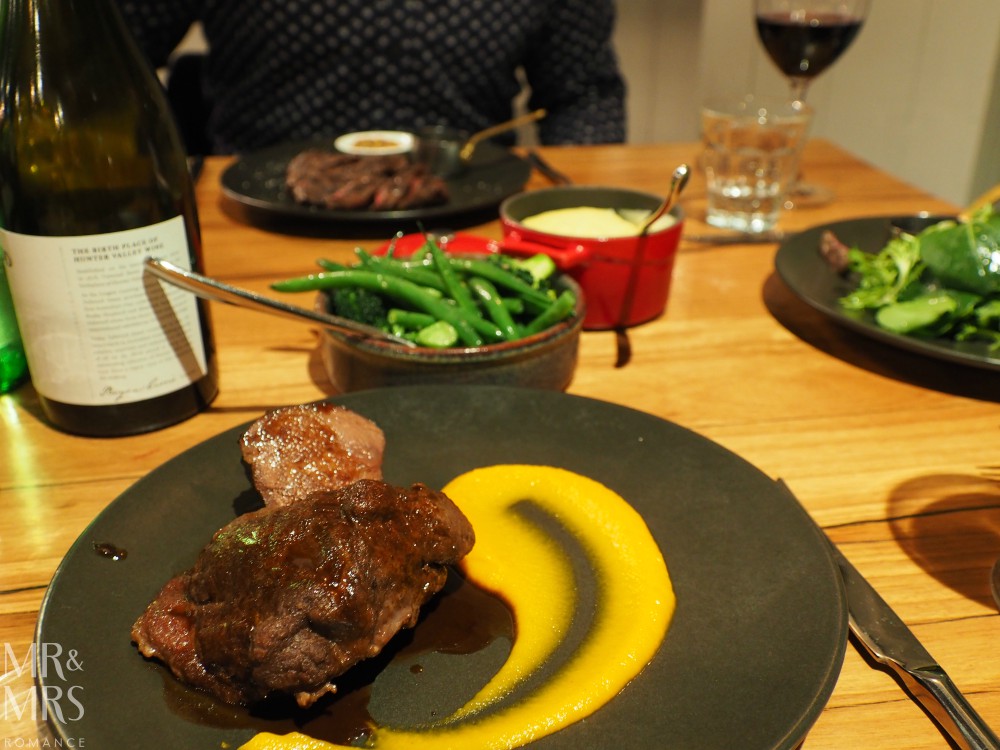 Other wines worth a mention

Along with the three we tried – the Sweetwater Semillon, the Dalwood Shiraz and the Hungerford Hill Cabernet Sauvignon – Le Petit Flot also offers a couple more wines and their food partners from New South Wales.

On the list is a Dalwood Chardonnay, which is paired with opulent pork belly from Braemar in the Southern Slopes of NSW, and a Sweetwater Shiraz to go with the restaurant’s Black Angus Onglet Steak.

These two wines complete the Taste of NSW experience at this intelligent restaurant, which is perfect for a subtle, romantic meal in the heart of the city. 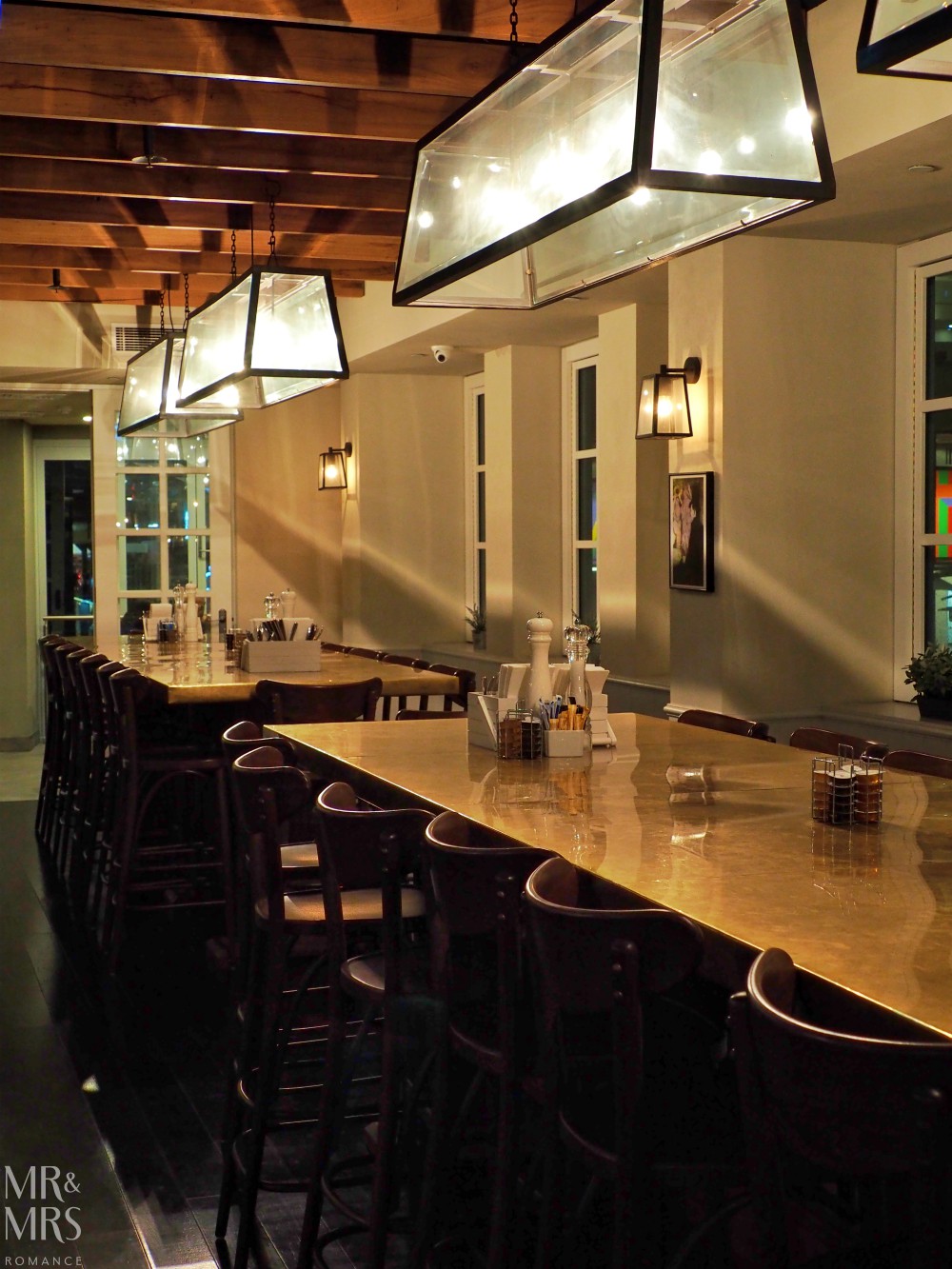 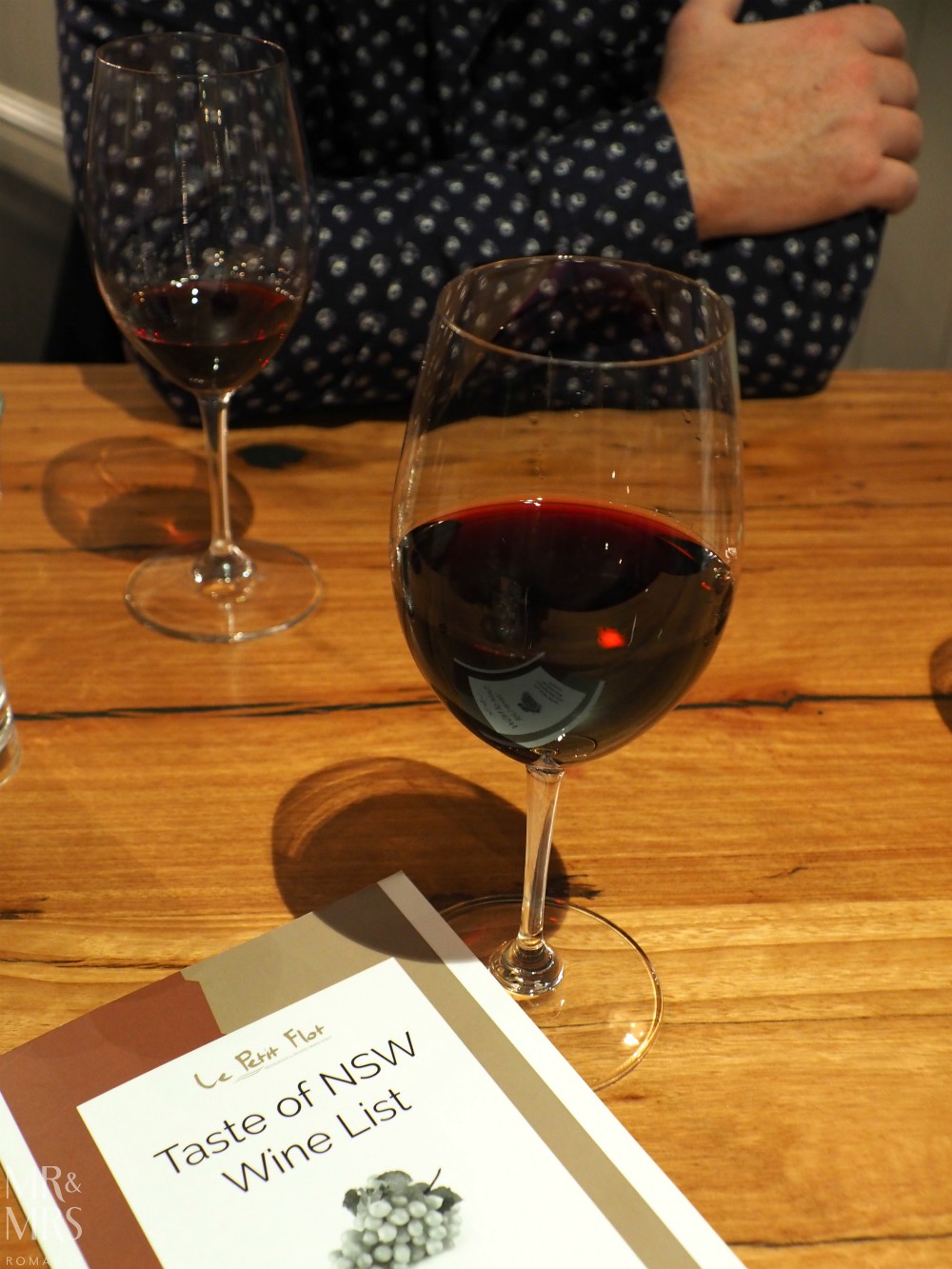 We dined as guests of Le Petit Flot, however, our opinions and words are our own.

Sydney’s Inner West is a trove of culinary gems. The cafés, pubs and restaurants here all have something unique to offer, and with its…