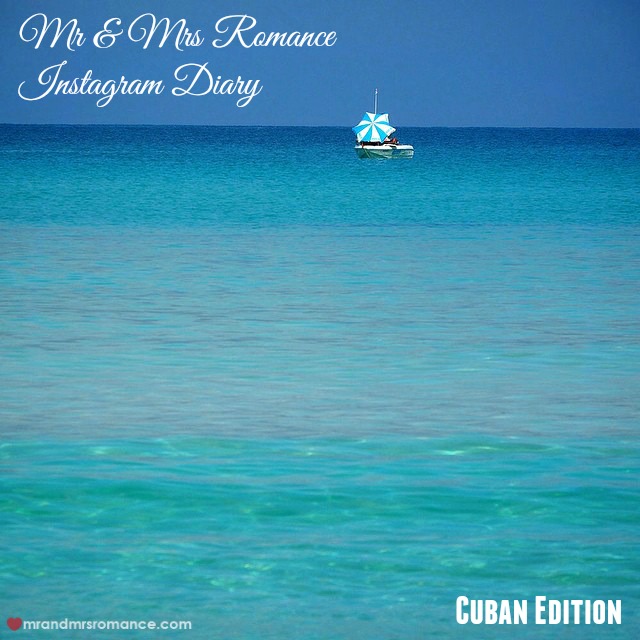 We’re ba-aack! Did y’miss us?! hopefully the answer is ‘yes’ – but not too much. I can’t stand that kind of pressure!

Well, it’s true, we are back, and as we thought might happen, Cuba was – for all it’s awesomeness – a little light on the internet side. It’s either non-existent or extortionately expensive. And with no Starbucks or MacDonald’s for us to loiter in, we were forced into an 10-day digital retreat.

Was it worth it? My lord, yes it was!

We’ve got such to tell you about, there’s a very good chance we’ll be wittering away for most of 2015 about this fascinating country. We really want to tell you about all its beauty, its passion, its culture, and also about its pitfalls, its scams and its failings. Like every country, Cuba has them, but unlike most, the weirdnesses and dodginess here has a completely different feel.

As for Instagram, you might have noticed (I hope you have) that we’ve been pretty quiet recently. Therefore, this diary’s going to be quite short as well. Was that an audible sigh of relief I heard?!

To combat this, I’ve added a couple of never-before-seen images from my phone I thought you might like to see. 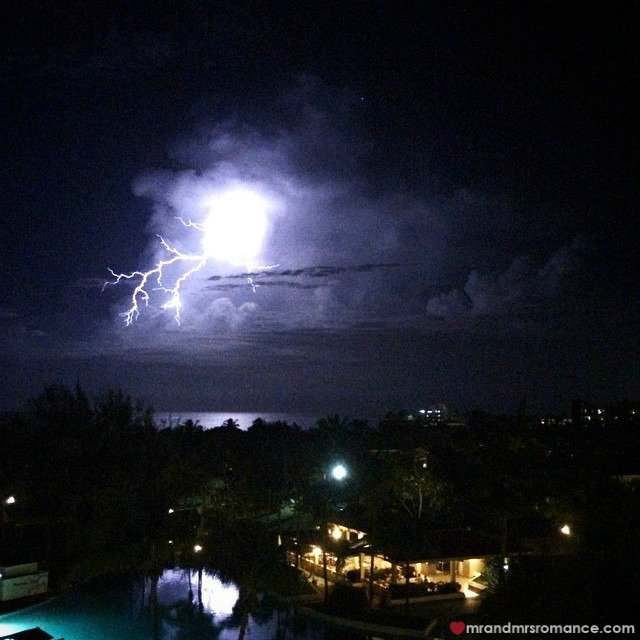 Our first night in Cuba’s greeted by this fantastic storm out over the Caribbean. We’re staying in Varadero – about 200km east of Havana on the north coast of Cuba. This peninsular has become a bit of a holiday circuit for all-inclusive resorts. It’s not really our thing, but we wanted to ease ourselves into this somewhat unknown culture.

I don’t think we’ll do this ever again, but more of that later.

The storm tonight is unbelievable. No rain, no thunder, but a non-stop lightning show out to sea that’s got us glued to our balcony seats.

If you’re interested how I shot this (with my iPhone by the way), check out our post on 7 tips to becoming an iPhone camera ninja. 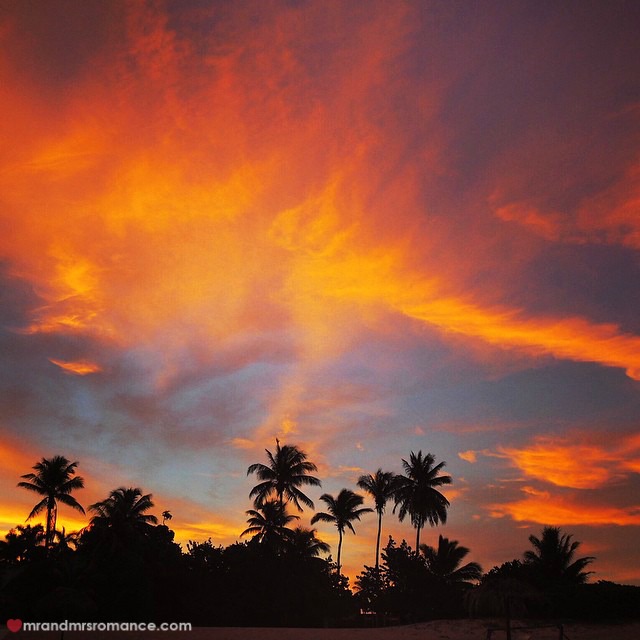 Our first morning in Cuba and this is what we wake up to. Actually, Mrs Romance woke me up quite some time before this point, but that’s not important, is it? No, this sunrise is important. What a sight. To say weird impressed is an understatement.

Our eye is turning more and more to when we can get on the road though – we feel Havana calling! 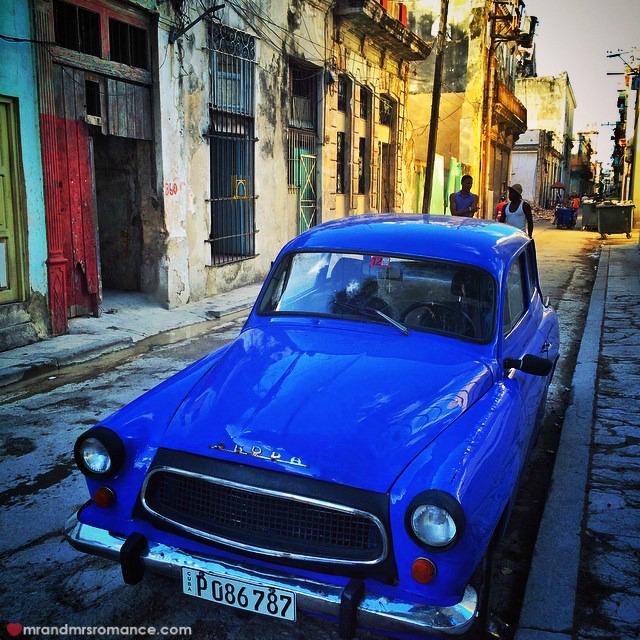 “What’s Havana like?” I hear you ask. Well, you know what people say about old cars, cobble streets and crumbling, decaying, beautiful buildings – it’s ALL TRUE!

We’re so excited about being here, we’re almost reluctant to leave on the eight-day tour we’ve booked with Cuban Adventures, who do small-group guided tours here. We’ve only got one day here and we’re kind of (very much) regretting not coming to Havana sooner. Aaaanyway… 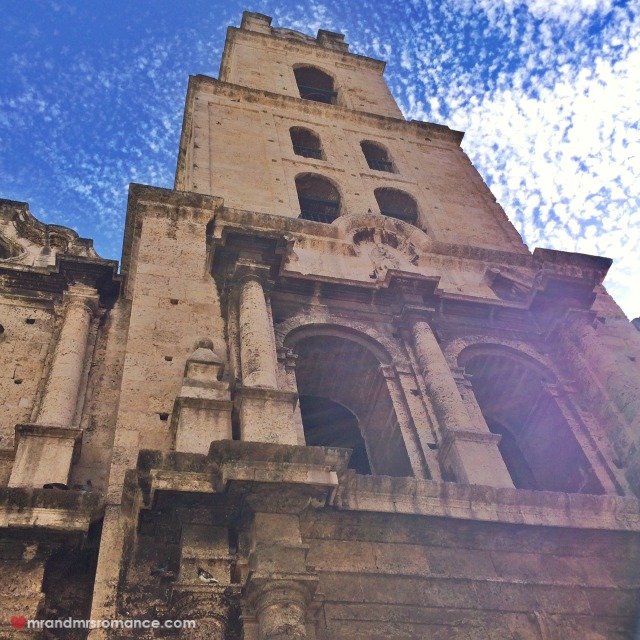 On the walking tour around Old Havana, we’re getting shown around by Juan Carlos – an authority on Havana’s history – who also represented Cuba’s swimming team in the Paralympics. He’s a very nice guy – and in spite of his visual impairment – this guy really knows his way around the town! It’s also a spectacular day weather-wise.

What a good start to the tour! 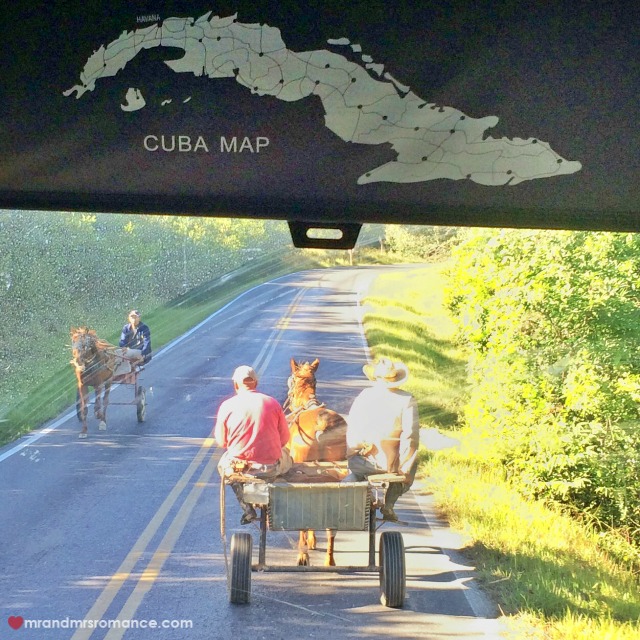 And we’re off! Out on the road, we’re a group of 9 people – Emma and Darren, Lucy and another Emma are from Sydney (this company’s based in Coogee, so not too surprising), Wayne and Ryan are from Canada, and Paras is a Londoner. It’s a good mix of nationalities and ages, and we get the feeling this is going to be a fun group.

Our tour guide Valeri (pronounced ‘bal-air-ee’) is a really good guy and is so keen to tell us about his country and its culture.

We head west into the Cuban countryside where going can be occasionally a little slow but none-the-less picturesque!*

None of the people mentioned above are pictured here. 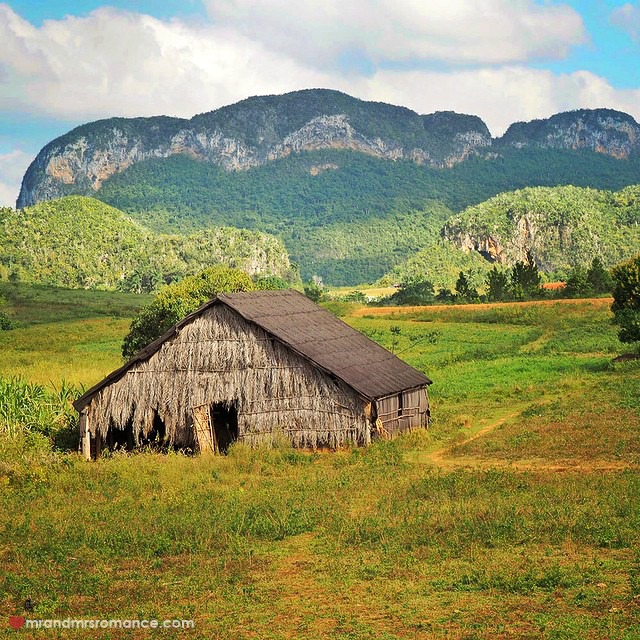 Our first port of call is the little town on Viñales. This region only has about 20,000 inhabitants, but it’s home to the best tobacco leaf in the world! Farms like this one grow produce that is sold to cigar houses such as Montecristo, Cuaba and Cohiba.

We take a hike through these lands and even visit a tobacco farmer who shows us how a cigar’s made. Which he lights and gives to the group. Somehow I end up smoking it as we continue our trek.

Highlight of my life right there! 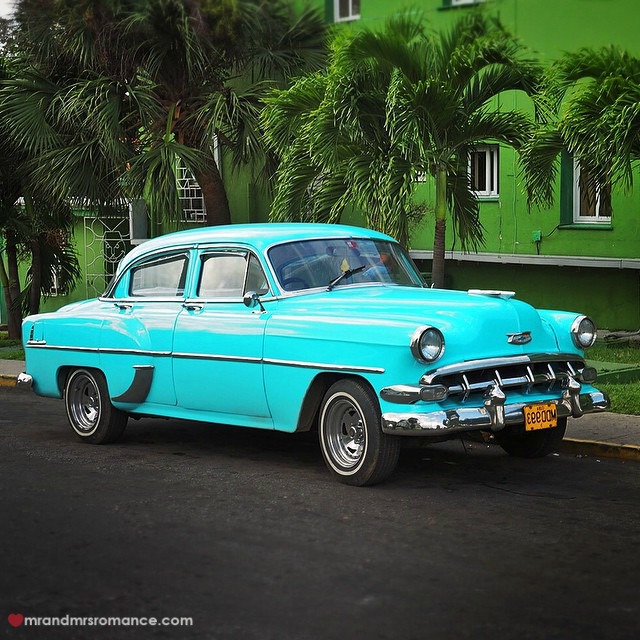 Even here in this little town quite a way from anywhere, these big American cars from the ’50s are all over the place. Most of the owners have them as investments these days (they can cost up to and above US$25,000) so a lot operate as taxis, which is cool.

This one’s parked just across the road from where we’re staying! 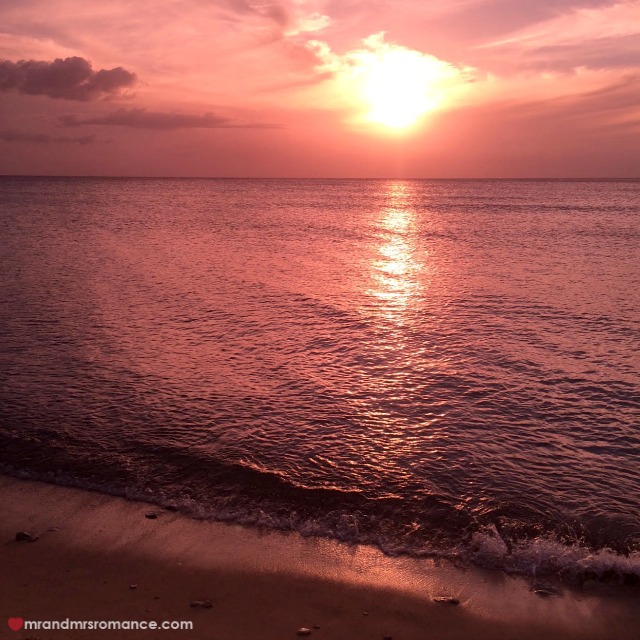 So many amazing things have happened on this trip. This crazy sunset’s one of them, but we’ll tell you more later. This is at a beach in the south of Cuba near the incredible town of Trinidad (not to be confused with the country of the same name).

Valeri’s organised a beach ‘picnic’ for us, which entails a two-man band, a barman with beers and cocktails, and platters of whole roast snapper, an enormous delicious Cuban style pizza, rice, beans and a host of other bits and pieces for us to snack on.

We bob around in the Caribbean, drinking and chatting, and watching the sun go down. Then they light a fire for us. It’s a magical experience, and it bonds the group together still further. 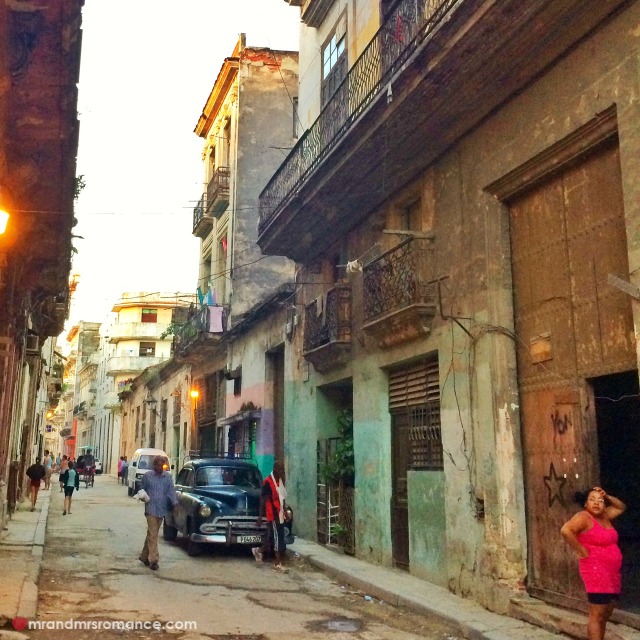 All too soon, we’re back amongst Havana’s narrow streets full of crazy and fun. Its rich smells and sounds fill our senses after such tranquility in the other places we’ve visited, and we feel totally at home here.

It’s been an incredible trip, which is a credit to our group, the tour operator, Valeri but above all Cuba. It won’t be long before we’re back, that’s for sure! 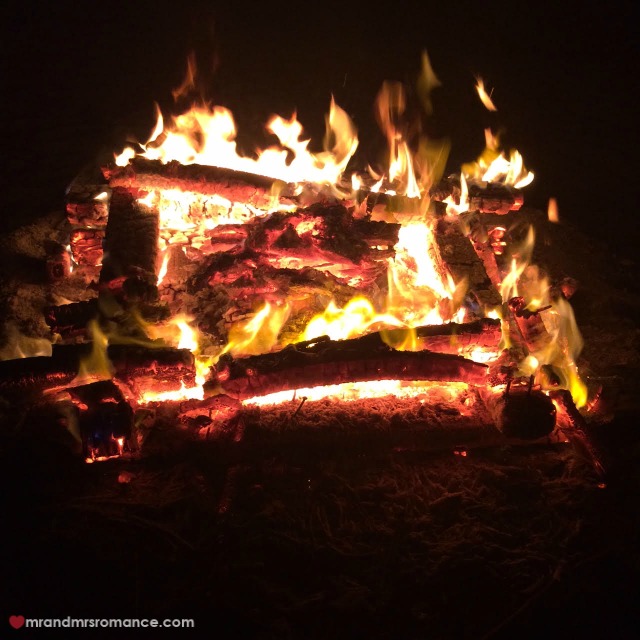 This was the fire they built for us on the beach. I think the timber they used was once a fence!

Don’t worry, if you want more info on Cuba and what we did, how we did it and what it was like, we’re in the process of writing it all up for you. And believe me, it won’t be boring!

Anyway, enough about us – how have you been? Talk to us in the comments!