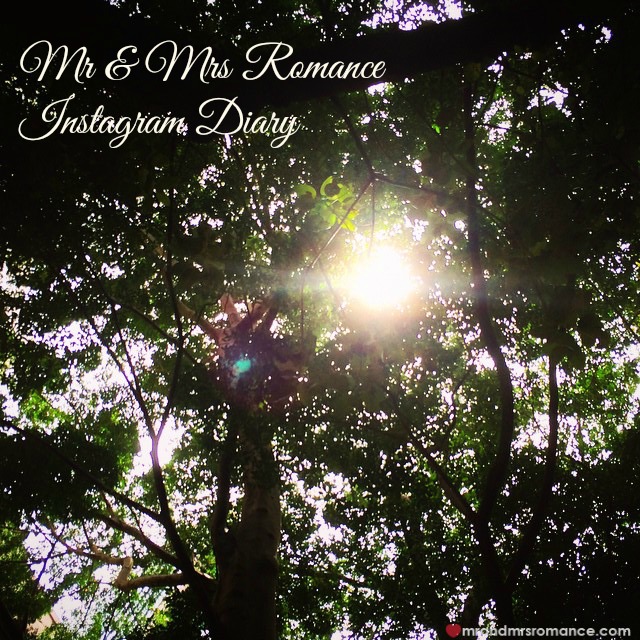 Bit of a sad start to the week. We’re preparing to head down to Melbourne for Mrs Romance’s poor aunt, who passed away suddenly last week. Her funeral is on Wednesday. It’s quite strange – we’re all usually excited about going down to Melbourne. We get to see family and friends, explore the city, generally have fun. This time isn’t going to be quite so much of that.

It’s odd when you’re so used to being in a place that’s usually so full of laughter and happiness, but suddenly it’s missing something. That’s what it’s going to be like I think. Nives was such a lovely lady, and she was so well-loved too.

Mrs R’s aunt was so well-known for her food it seems fitting that a lot of this week’s IG Diary is about food. In fact, I never used to like tiramisu until I tasted Mrs R’s aunt’s. I don’t think I’ll ever eat another slice now. It just won’t compare. 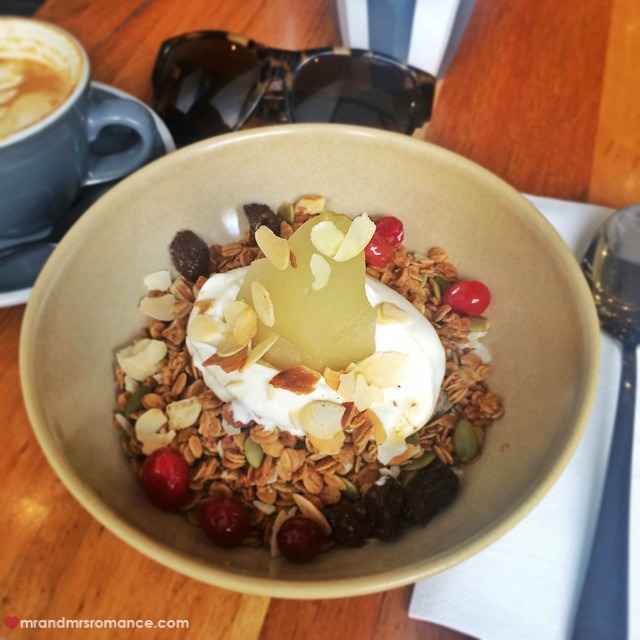 Mrs Romance is back in Surry Hills today to catch up with a couple of people. She’s back in our old haunt, the Paramount Coffee Project, which has to be one of the best cafes in Surry Hills. An enormous call, but I’m confident! 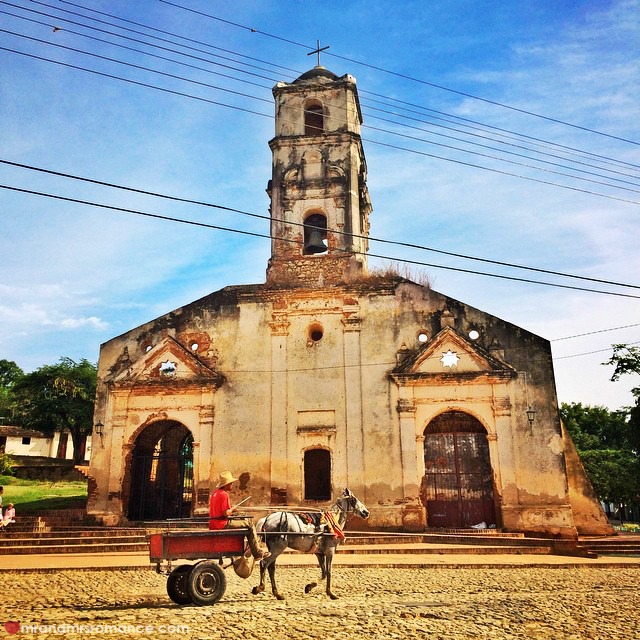 Today we’re all about our Cuba trip! We had such an incredible time there. Most of that was thanks to our awesome tour guide, Valeri, and the company CubanAdventures.com.

Here’s our review of the tour – what we think is the best way to see Cuba, especially if you’re on a limited time frame. 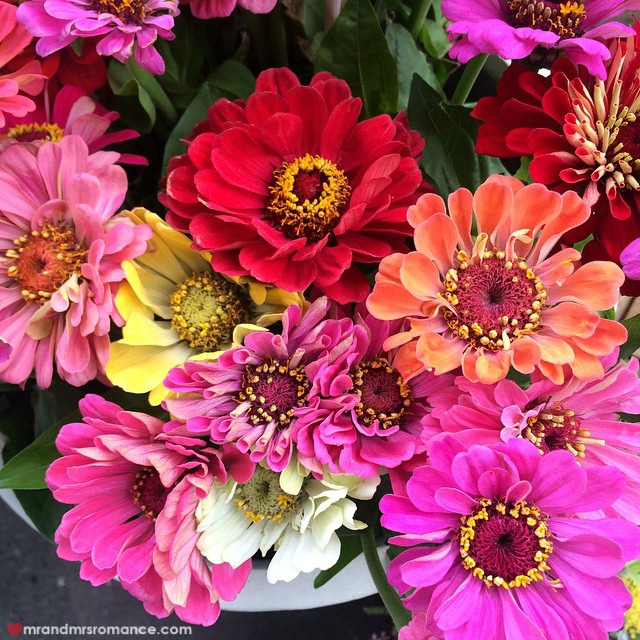 Today is Mrs Romance’s aunt’s funeral. We flew down to Melbourne this morning and Mrs Romance’s family all fly back up to Sydney this afternoon.

It’s actually a really lovely service with so many people there for her. So many people got up to speak as well – it was a very special send-off.

We’ve decided to stay in Melbourne a few more days as we’re not sure when we’ll be able to get down here again, and we owe a couple of people a visit. Hopefully being around friends and not just going back home will make this day a little less sad – we’ll see. 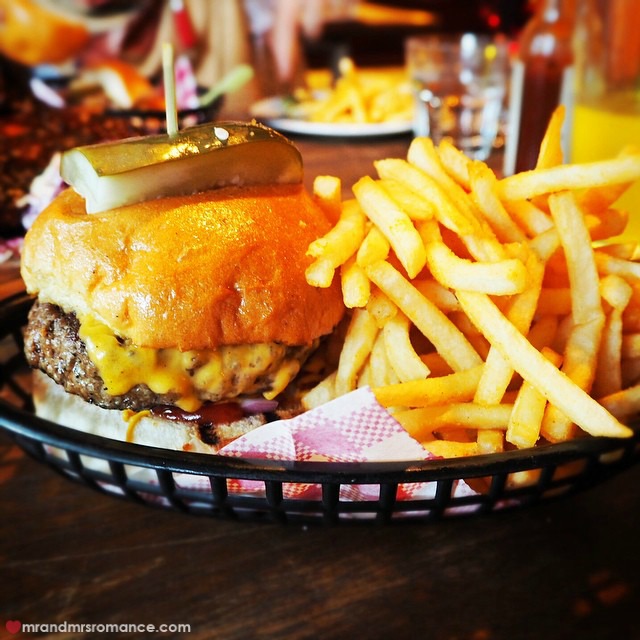 What you’re looking at here is the best burger (still in circulation) I’ve ever eaten. When I’d finished eating it (which didn’t take long) I was in a trancelike euphoric state. Whatever they put in it works!

And where’s it from? A bar in West Hollywood, LA, called Pearl’s Bar. Here’s our review of Pearl’s a ripper of a drinking spot. 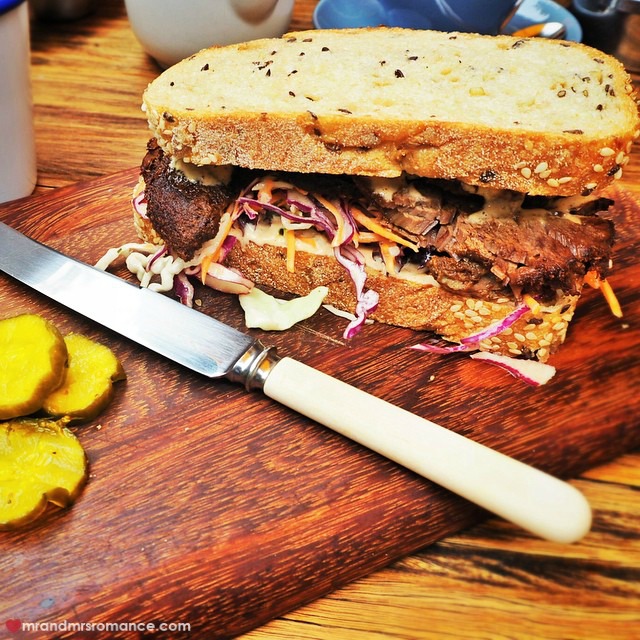 This morning we’re out and about in a cafe called Mixed Business in Clifton Hill in Melbourne. This is why it’s so good to have friends who locals here – we’d never have found this place.

We all order well – which I don’t think’s too hard here – but my smokey slow-roast beef sandwich is king. It’s a bit like a reuben sandwich but with a hickory hit! Genius between two slices of seeded sourdough! 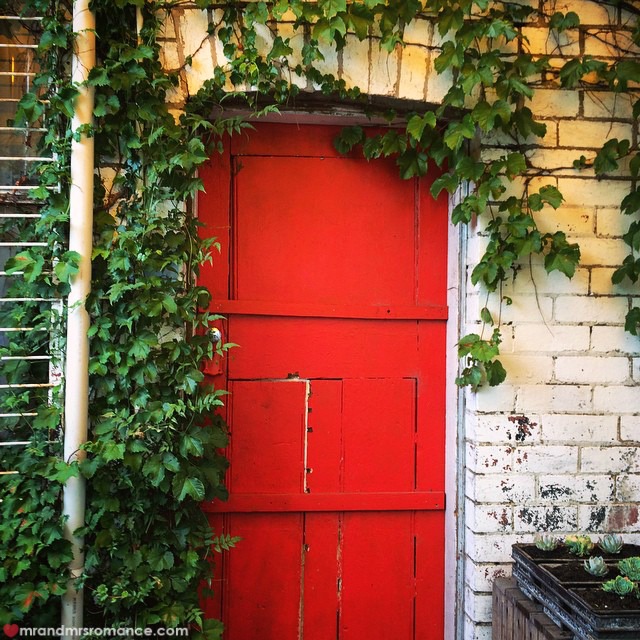 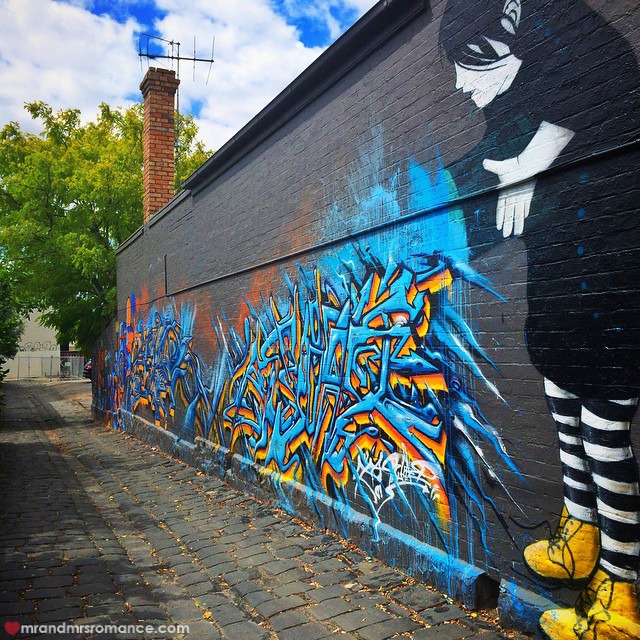 After another sensational breakfast, this time with our mates Smaggle and Mr Smaggle, we head off from Grub Street Food Van cafe to the airport. Just before we get to the car, we spot a great bit of Melbourne street art. This city’s getting quite a name for itself with little lane ways and alleys with a surprise shot of colour. 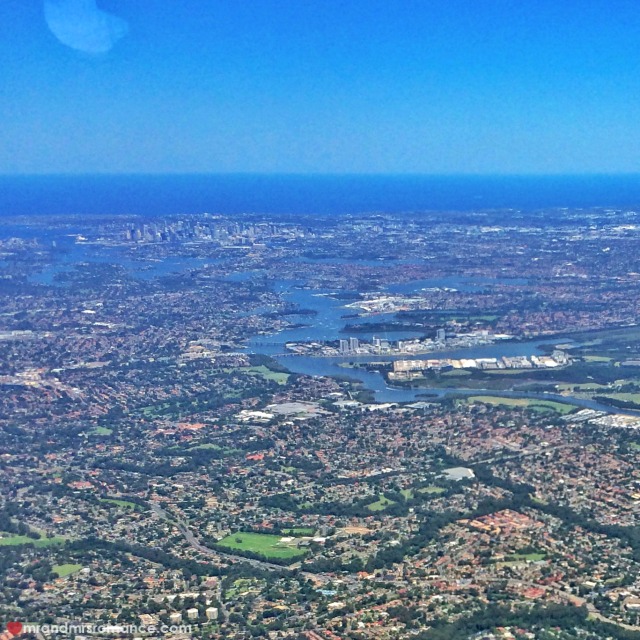 And here we are back in Sydney. Nothing like a good view of the harbour as we fly in. Good tip for flying in from Melbourne to Sydney: make sure you get a seat on the ABC side of the plane – on the left. The usual flight path goes north way past the city then banks right back round with the Harbour Bridge and Opera House right outside your window.

We had DEF seats this time. 🙁 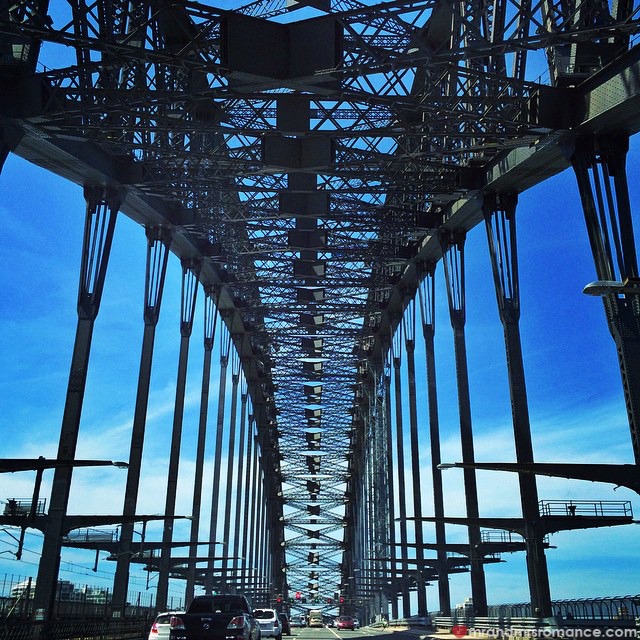 And today we’ve finally been able to get back into our apartment in the city. It’s been so long since we were last there it feels quite strange being home finally. Our last AirBnB guest left the other day and our awesome cleaner has been in to tidy up for us.

It’s like Sydney knew we were coming home. The weather’s top and the view as we cross the Harbour Bridge is just as it was when we left: spectacular.

These next couple of pics are just a bit of fun from @AngryBastard of course, and @Christina.Butcher! 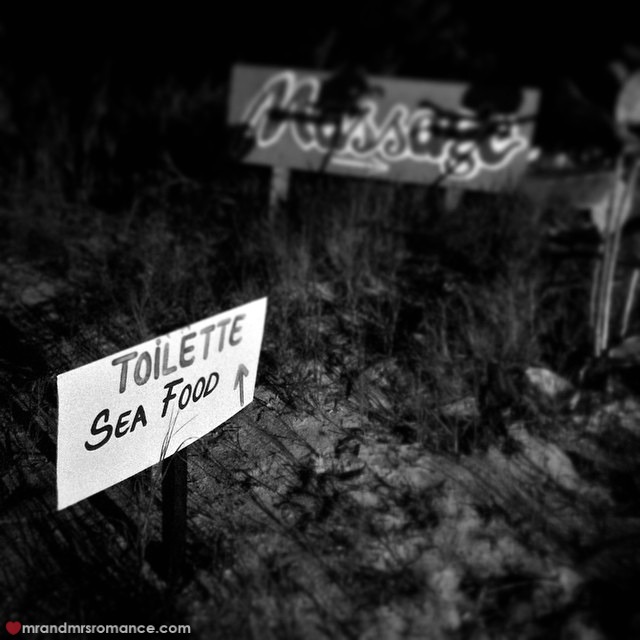 We honestly couldn’t believe this when we first saw this sign. This was from when we were in the all-inclusive resort in Cuba. It was probably the worst part of our 9-week trip, which was at total odds with the rest of our time in beautiful Cuba – but more about that another time. This sign, however, was one of the highlights!

Why on earth would you have a sign to the toilets on the same one as where you can go and eat sea food?! Astonishing. Oh and why is it in French? This resort was a firm favourite of French-Canadian tourists. 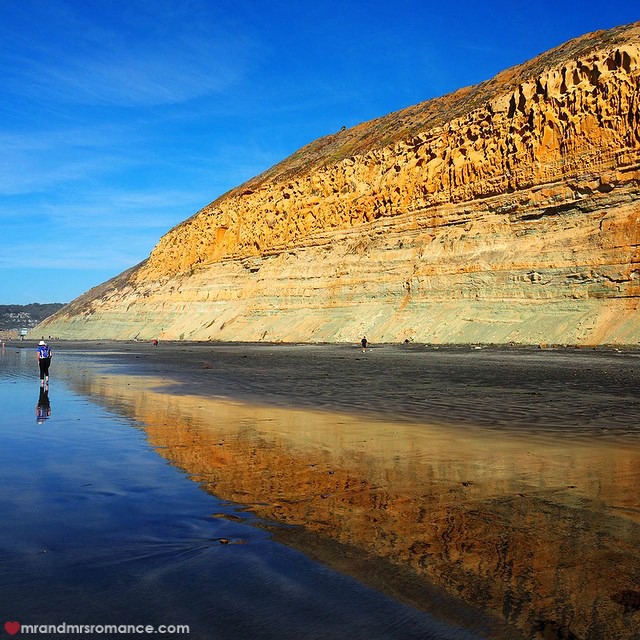 And last of all, this spectacular shot by Mrs Romance. This beach and cliff front is the end of a beautiful walk through San Diego’s renowned Torrey Pines State Reserve. This beach is so long and wide, the shiny wet sand is so reflective, and the cliffs so sheer and grand, it’s the best way to finish the walk through the park.

If you’re ever in Southern California, make sure you make the trip up to the Torrey Pines State Reserve.

How do you feel when you finally get home after a holiday? What do you think of street art? Do you think it’s just glorified graffiti or really a form of expression? Do you have an ultimate burger experience? Tell us in the comments!

A clear-out, a competition and crazy food weekend

It’s been pretty awful weather in Sydney this week. This storm that pile-drived (or should that be pile-drove) into the city was pretty impressive….