I always like long weekends, but they do confuse my mind’s timetable – or ‘mindtable’ if you will! 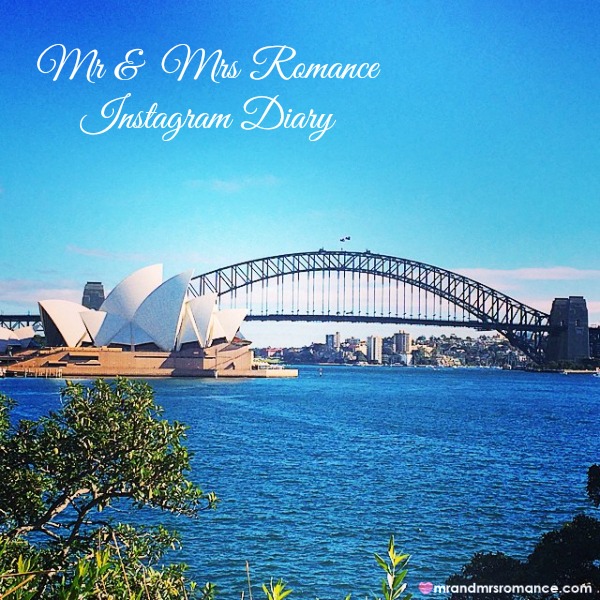 On one hand it’s nice to have that extra day for the weekend, but on the other it makes the rest of the week one day shorter to get everything done!

Plus poor Mrs Romance is still struggling with her calf muscle injury. So this week it’s down to me to get out and about, and take our all important harbour pic. This morning was beautiful, but things have turned quite grim this afternoon. I suppose that’s what bank holiday Mondays are supposed to be like though. Well, they must be otherwise all the other public holidays since the beginning of time have been wrong!

In spite of her hurty leg, Mrs Romance has soldiered on through Sydney’s Hair Expo 2014. She’s been interviewing hairdressers, designers, salon owners and hair gurus all weekend with this little stroke of genius: her hair brush microphone! It’s been incredibly popular – as you’d expect. I think she even got a bit of impromptu singing recorded too!

Keep your eyes (and ears) open for some of those interviews over on Hair Romance through the coming weeks. She’s got some good ones! 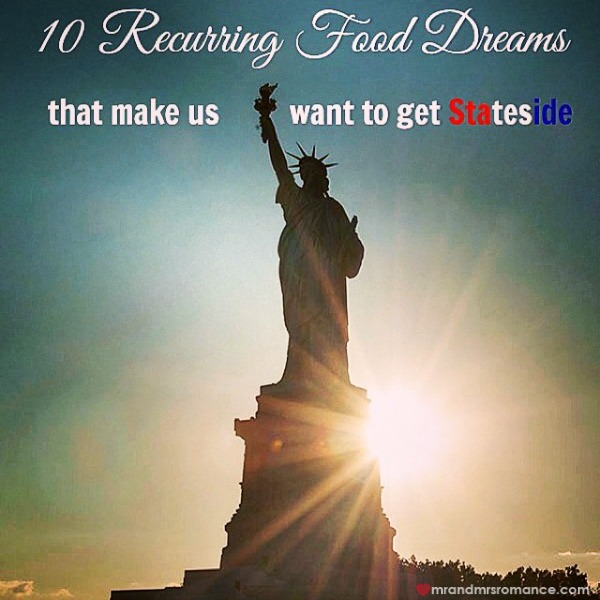 We reminisce over the incredible meals we had while we were in the States last year on site this week. In some cases the memories have caused some serious recurring food dreams, resulting in waking up to some disgraceful pillow-drooling! It’s become so bad, we thought we’d put together a collection of our top ten US meals that have caused these recurring food dreams.

There are some good ones there – especially if you’re feeling hungry or if you’re about to head to San Diego, San Francisco, Chicago or New York anytime soon! 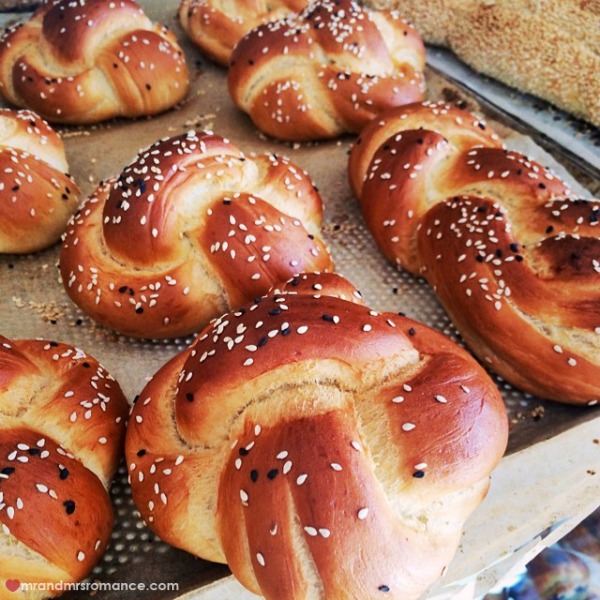 Today Mrs Romance gets to check out Shuk in Bondi. It’s a delicious cafe bakery with some amazing looking breads and things! Keep an eye out on the blog for her review – coming soon! 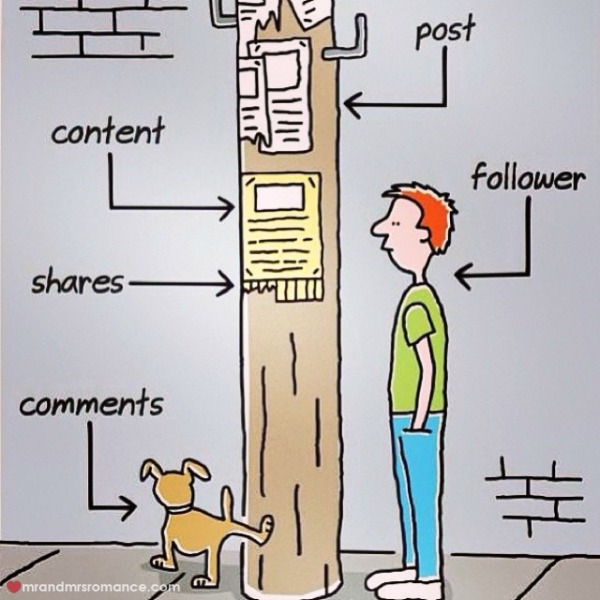 I felt obliged to pop this up on Instagram today. It’s a very funny drawing of blogging simplified. I especially like the ‘Comments’ part – this was obviously drawn by a rather jaded blogger!

I re-grammed this from The Bamboo Garden‘s Insta feed. 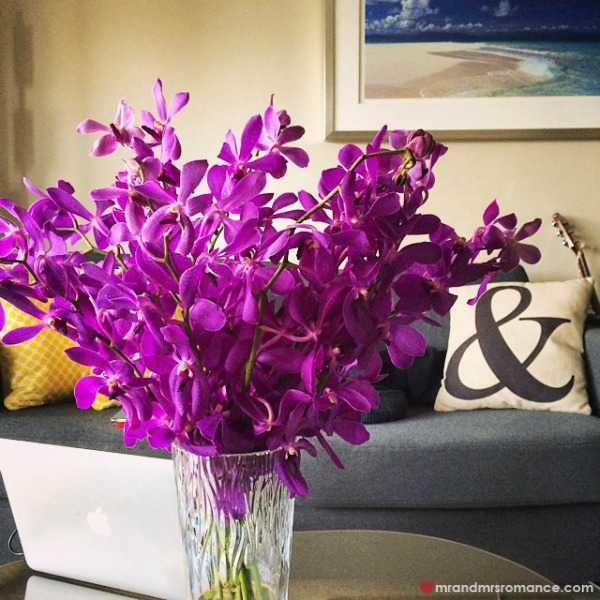 Mrs Romance has finally convinced me that buying her flowers isn’t a total waste of money at all. In fact it clearly makes her so happy I feel kind of bad I haven’t done it more in the past. We’ve talked about this a bit in the past on Mr & Mrs. Here’s our He Said, She Said on when I buy her flowers.

In the same way that she’s cleverly trained me to buy her flowers more, this is my attempt at training her to like the colour purple more! Sneaky, ay? These are orchids, by the way, of the phylum purplus flowerus bunchi.

This is also another little peek into our apartment we’ve been promising. This is part of our living room with our favourite picture of a northern Queensland beach by the amazing photographer Peter Lik, our favourite cushion from I Love Linen and our favourite place to sit: our sofa! 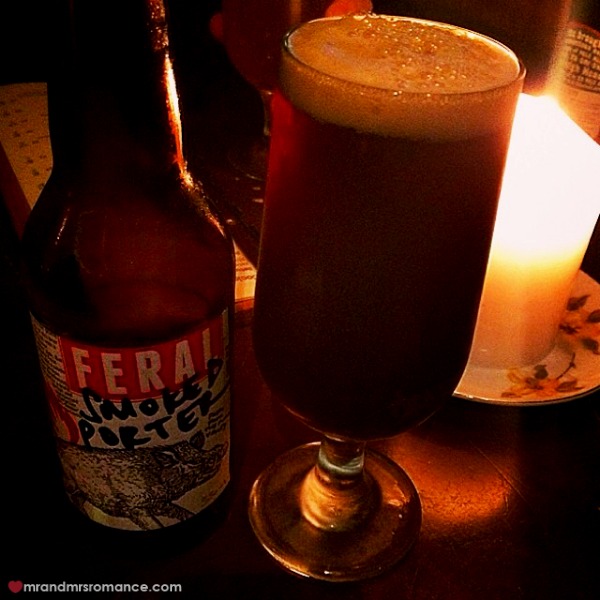 Tonight I’m out with the lads. We head to a few different places and discuss the Football World Cup that’s about to start. We’ve got a sweepstake running that is drawn tonight. I’m pretty happy – I’ve pulled out the Netherlands and Brazil (and Greece and Ghana).

We decide on The Rook for dinner. The food’s good and the beer on offer’s even better. My Feral Brewing Smoked Porter is like drinking a glass of beery bacon… or bacony beer! Either way, it’s delicious.

Along with Feral, Australia is producing some amazing craft beer at the moment. Choosing one can be tricky though, so – at great sacrifice – I’ve reviewed 9 different Aussie beers you have to try.

If you’re interested in beer – or if you want to buy someone else a good brew – but you’re not sure which one to go for, this review will help your decision. 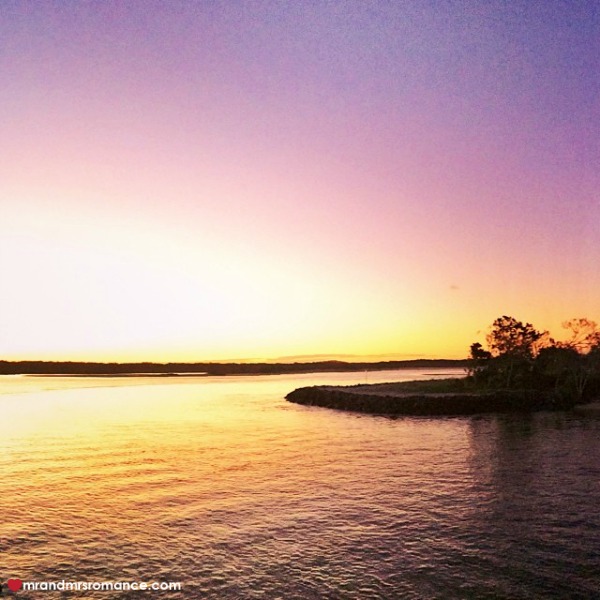 It seems like an eternity ago that we were in the sunny grip of Noosa’s early winter. It’s such a lovely place with so much romance potential.

Here’s our Romance Recharge and ultimate winter getaway guide to Noosa you should definitely check out if you’re getting worn down by the Aussie winter. 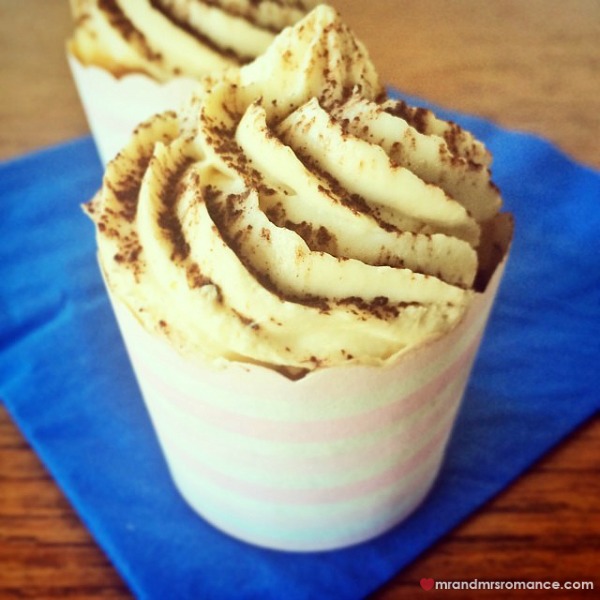 Mrs Romance has been spending the day with the ridiculously funny and lovely Steph from LipstickAndCake.com. This tiramisu cupcake she’s made is genius. And I don’t usually like tiramisu!

Here’s Steph’s recipe for these tiramisu cupcakes on LipstickAndCake.com! 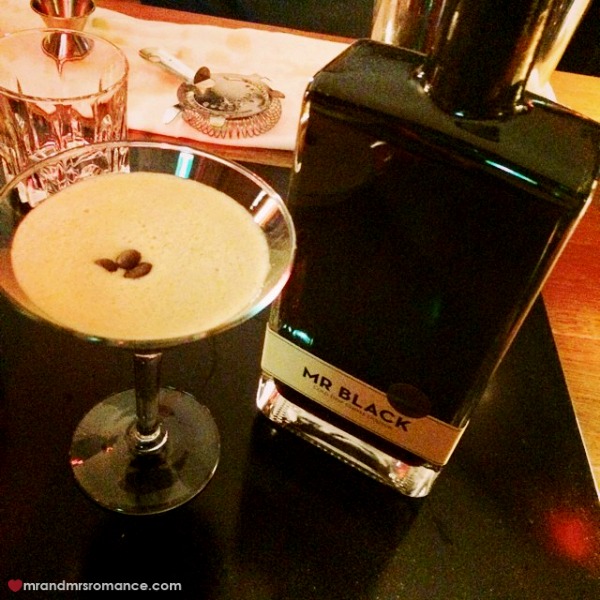 I think Steph will be pretty much sick of Mr & Mrs Romance by the end of this week – perhaps why she’s heading off to Hawaii tomorrow! Tonight she’s accompanying my to try the new kid on the block, Mr Black. It’s a coffee liqueur made from cold drip coffee.

I’ve had quite a few espresso martinis in my time but I must say this one is the best. I think the words ‘bloody delicious’ were shared when Steph and I tried this one, though the other cocktails we had were also extremely tasty. 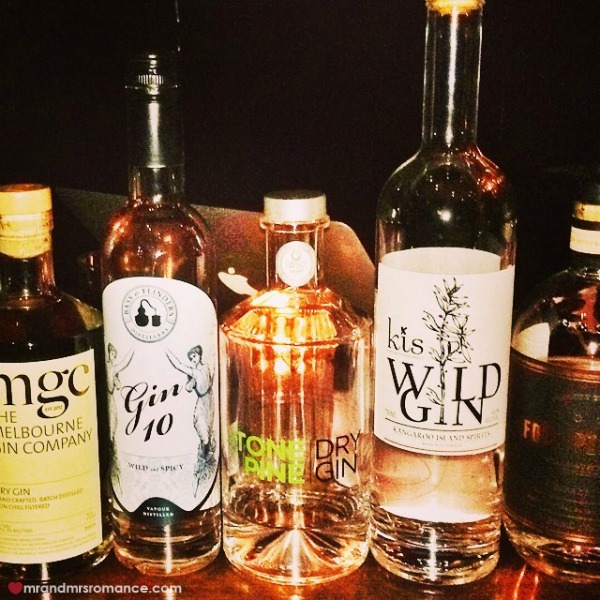 Straight after we’ve delved into Mr Black’s dark mysterious flavours, Steph and I hike it across to Darlinghurst to Eau de Vie – an awesome cocktail bar that we’ll certainly be featuring on Mr & Mrs Romance soon.

Tonight though, we’re here to meet with the spectacular Caroline Childerley from The Gin Queen. You might have seen her featured on Mr & Mrs a couple of times – that’s because she’s great and we love gin!

We’re trying some excellent Australian gins and meet with a couple of the distillers as well tonight. It’s a great night and we have lots of fun!

We’ve written an Australian gin wrap-up in the past though it didn’t include Stone Pine Dry Gin or the Kangaroo Island Wild Gin, which we may have to add to this: Our review of four Australian gin companies. 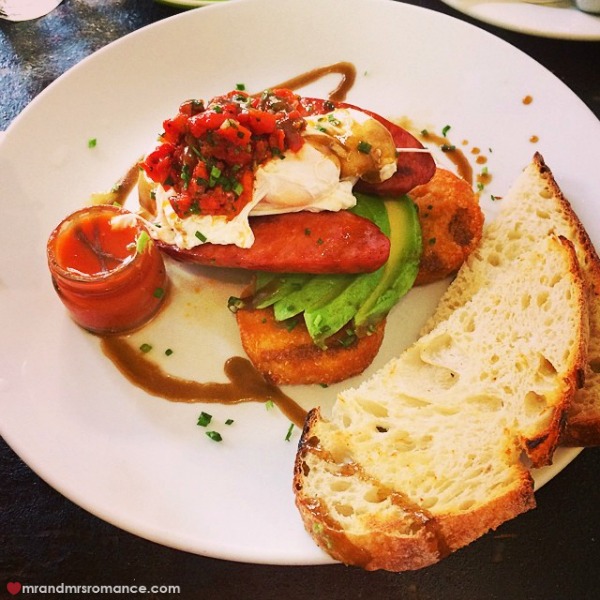 It’s an unsurprisingly late start for us this morning, considering the amount of gin we had last night. Our breakfast choice this morning, therefore, is found outside the house!

Mrs Romance and I order the same thing, which is rare. But the sound of hash brown and chorizo stack with poached eggs, tomato salsa and sourdough toast is too much to go past! It’s set me up nicely, as I’ve got a busy day ahead of me: 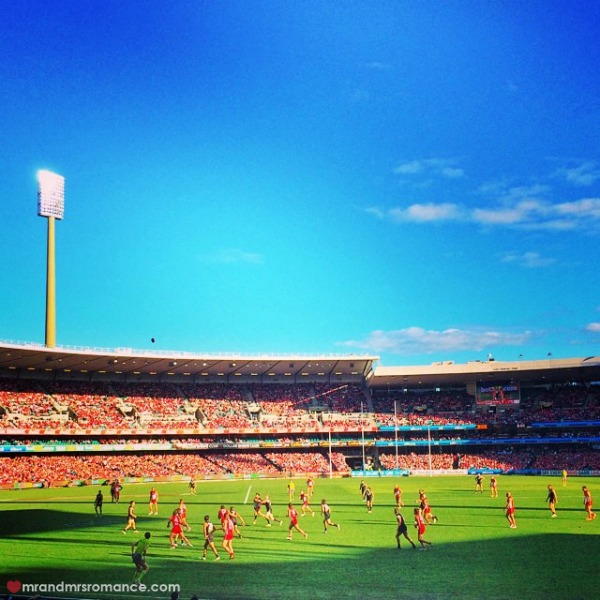 My mate has managed to get me a ticket to the Sydney Swans AFL game – in the members’ area no less! They sell proper beer here and normal food too!

It’s a close game – this is a top-of-the-table battle after all. But at the end of the game, Sydney come out victorious against the Port Adelaide Power.

By the way, can you spot the ball in this pic? 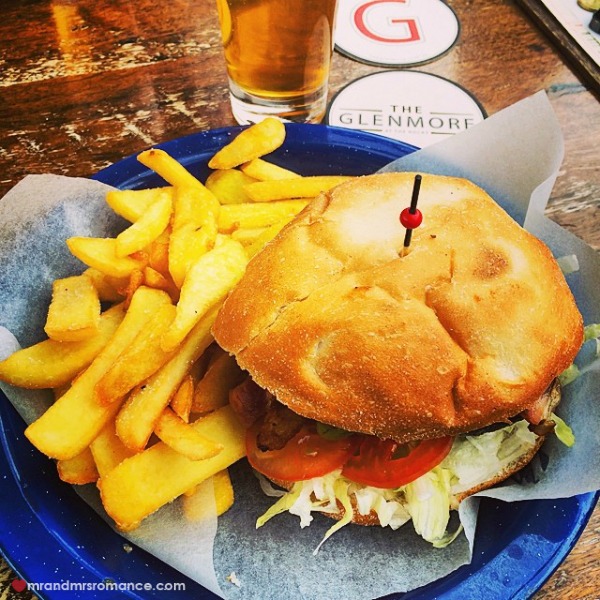 Thanks to the World Cup, this month’s turning out to be sport-filled and packed with early morning starts. Today England are playing Italy in their first game of the World Cup proper. I could watch the game at home, but instead I get up at the crack of dawn (well, 7am – but on a Sunday!) and haul ass to the Ship Inn with some ex-pat mates to see England pull off a recognisably average performance and lose 2-1.

That’s okay though, as I’ve had several beers by the time the whistle goes at 90 minutes. Then we watch the Japan vs Ivory Coast game. Well, sort of.

Finally it’s time for lunch. The Glenmore Hotel’s rooftop bar serves a brilliant burger that absorbs some of the beer, and a nap when I get home works on the rest. There should be just enough time now to prepare for the week ahead – let’s just hope it’s not too busy!

How was your weekend? Have you been watching any of the World Cup? What does your coming week look like? Tell us in the comments!

10 top things to do in Milan, Italy

Milan is seen as a hub for commerce rather than romance or tourism. But is that really true? We found more than enough to…