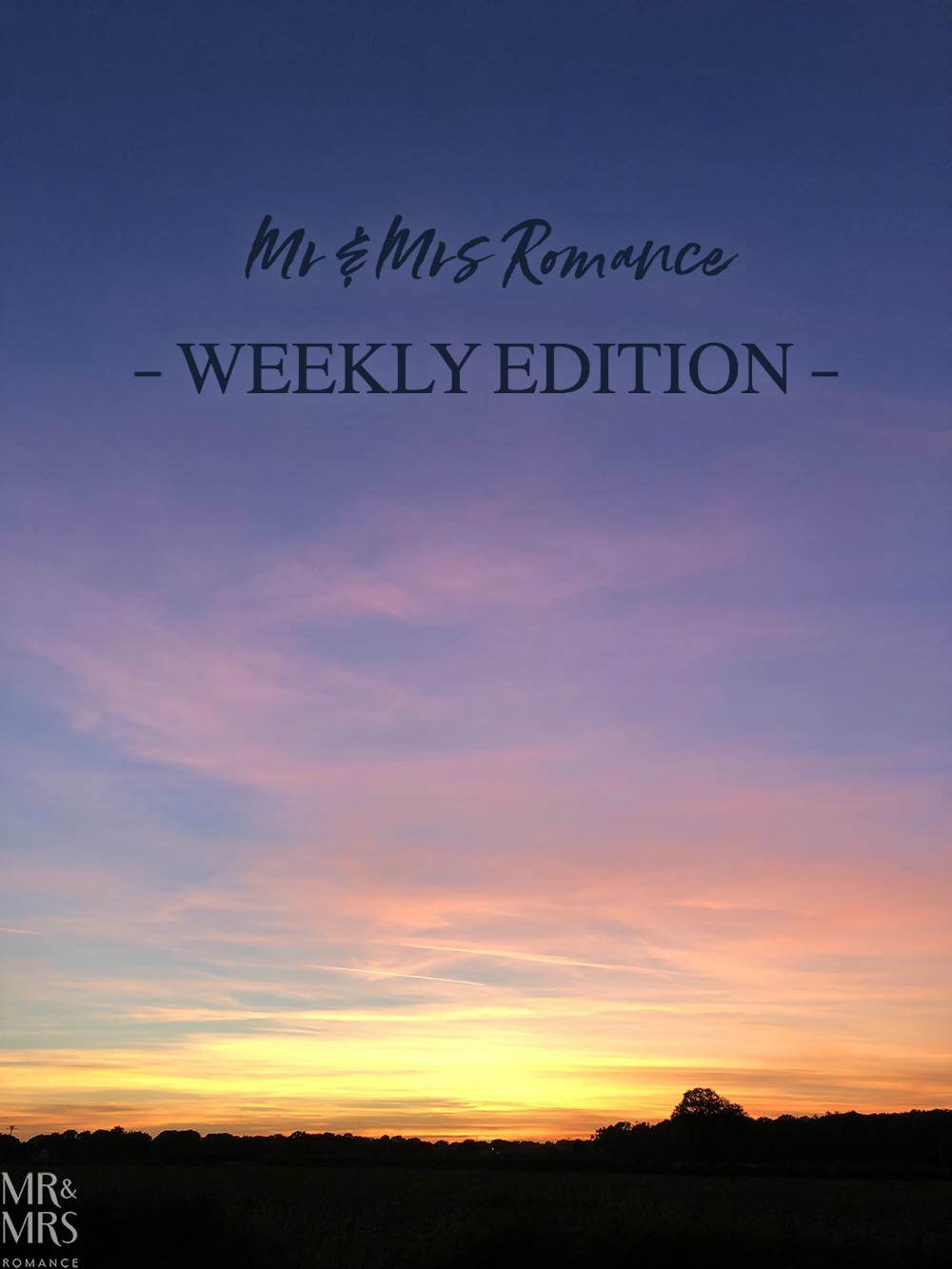 One thing we love about travelling around the UK – apart from seeing family and friends – is seeing the different counties.

Each one (there are 48 counties just in England) has a completely different feel and history to it. And in this Weekly Edition, we’re visiting four of them.

Millions of people visit the UK every year, but so many miss the opportunity to explore outside the capital cities. It’s a shame because there’s so much more to England than London, and more to Scotland than Edinburgh. Venturing into the various counties gives you a much better idea of what the UK’s about.

We’re visiting Norfolk in England’s east for a walk on the beach, Suffolk for some amazing food, Sussex for a catch up with old friends and Essex for a birthday party and a horse ride! 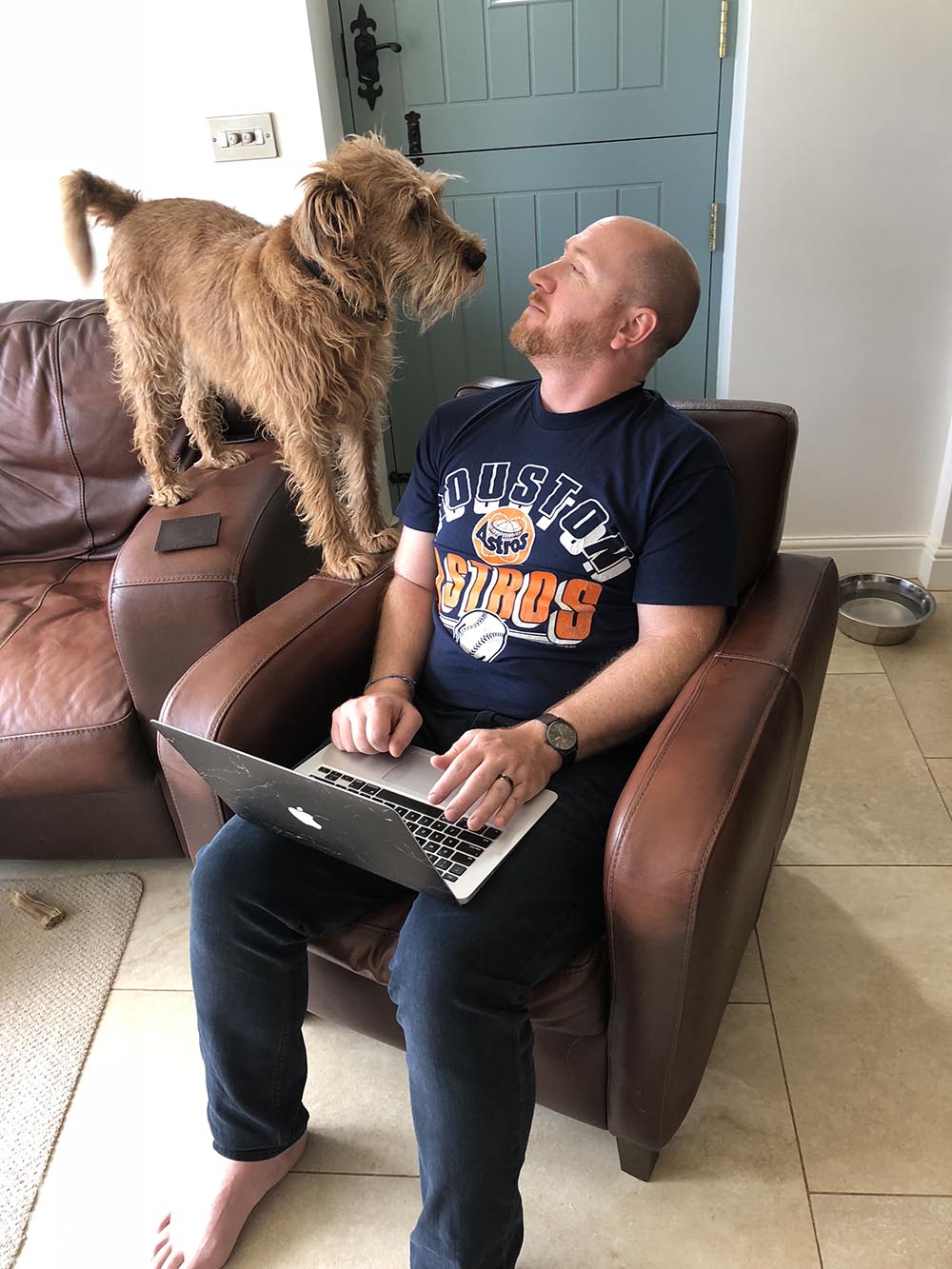 We kick the week off with a spot of work… or at least we try. Our friends Dave and Clare have two very distracting dogs that are too cute to ignore. This is Ruby the Irish Terrier. You’ll be seeing more of her and Flo the Springer Spaniel – her partner in crime – later in this Edition. 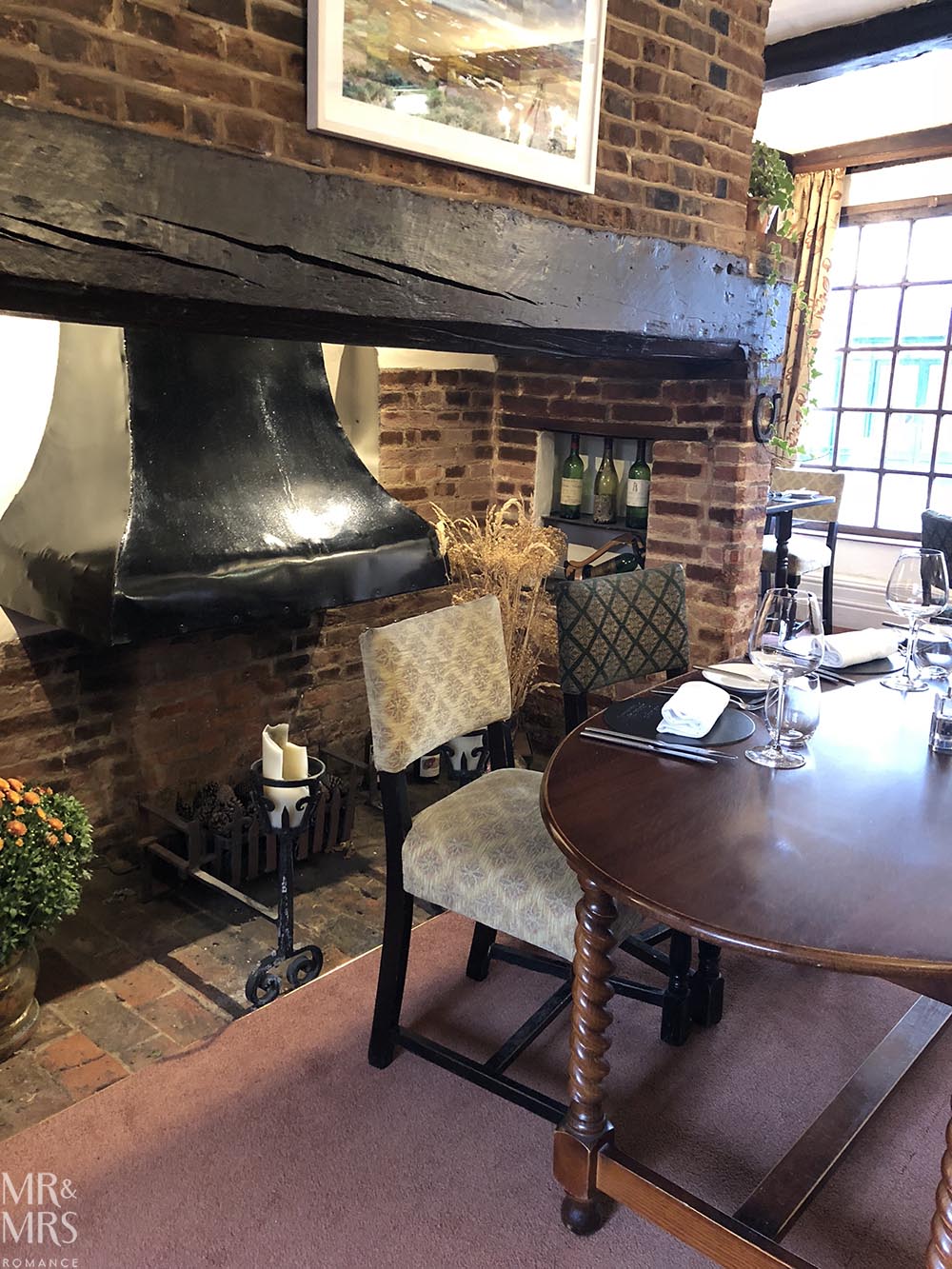 After getting all the necessary work done, we head off into Suffolk to see my mum and dad. They live near the little town of Sudbury. It’s a pretty place, full of history (it’s the birthplace of Thomas Gainsborough) and also a bit of a foodie’s paradise.

Suffolk is in East Anglia, which is the big bump of coastline in the southeast of England.

We’ve come to The Secret Garden – a restaurant set in a beautiful old Tudor house. It used to be more of a cafe bar, but things have changed here. 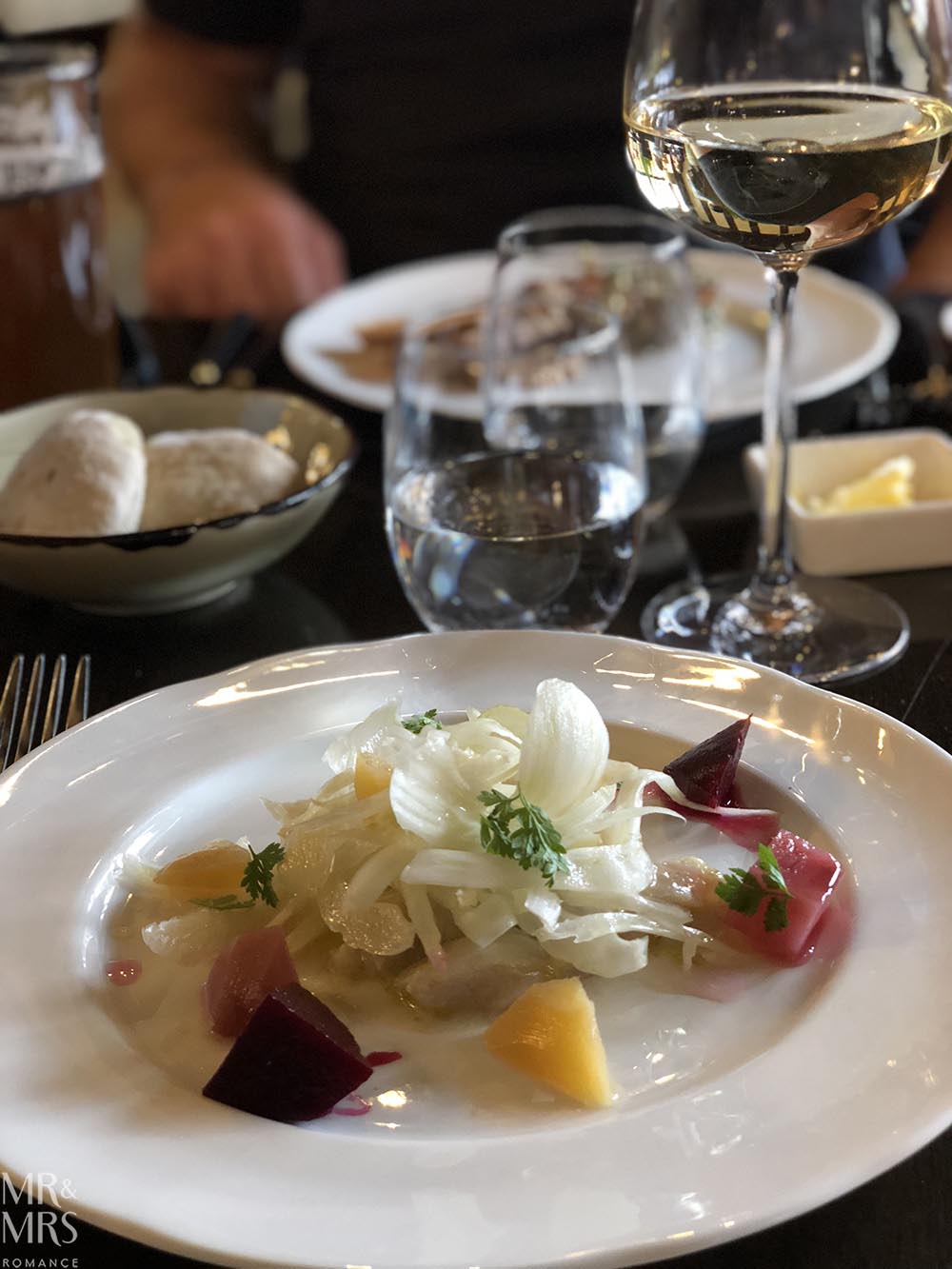 Christina starts things off with a beautiful little ceviche dish. I have the tartare, which is delicious too. 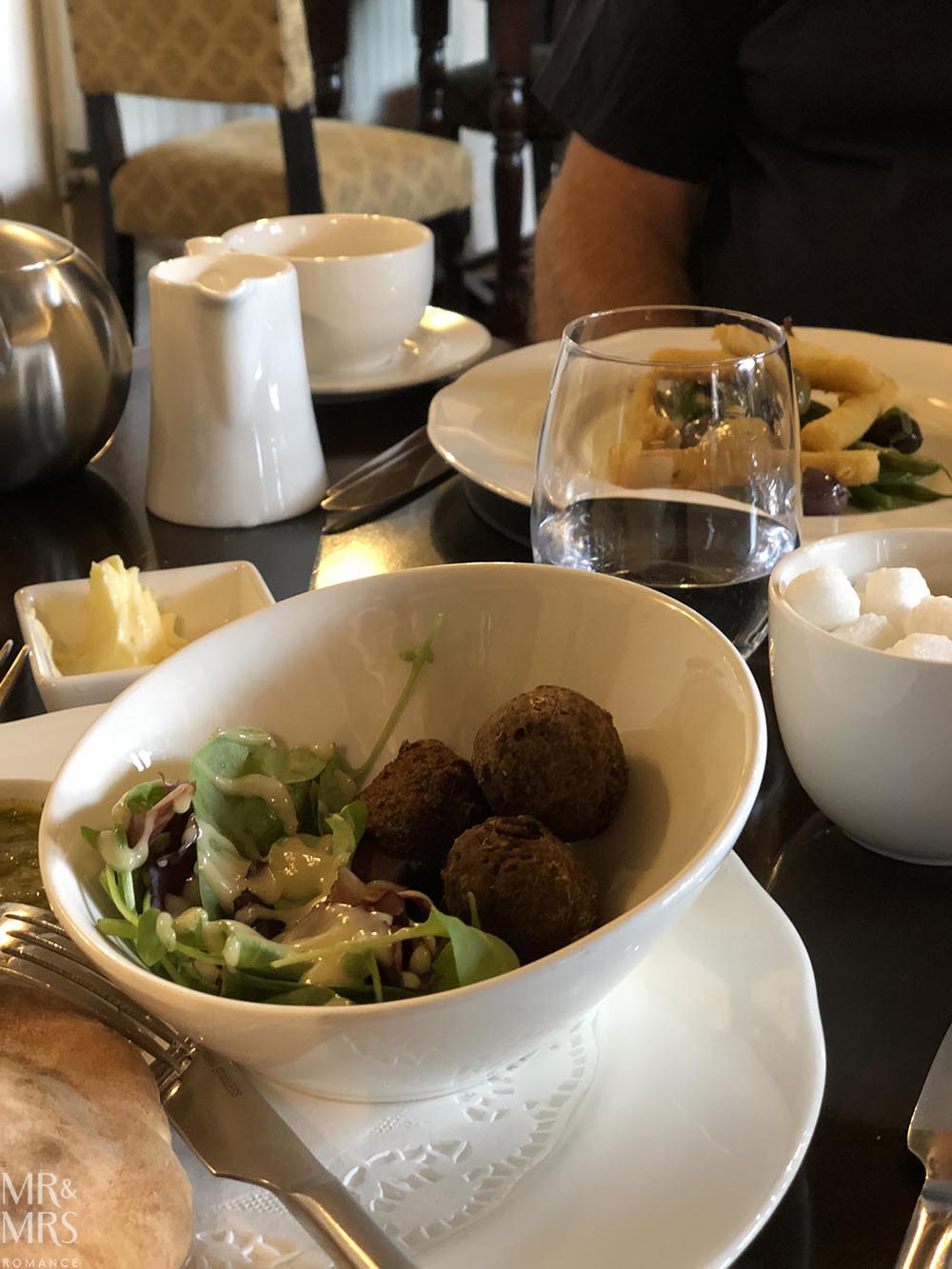 Christina’s felafel salad looks and tastes lovely, and service here is perfect too. Watch this space for a full review, but for the time being, take this as a strong recommendation from us. The Secret Garden – more like a hidden gem. 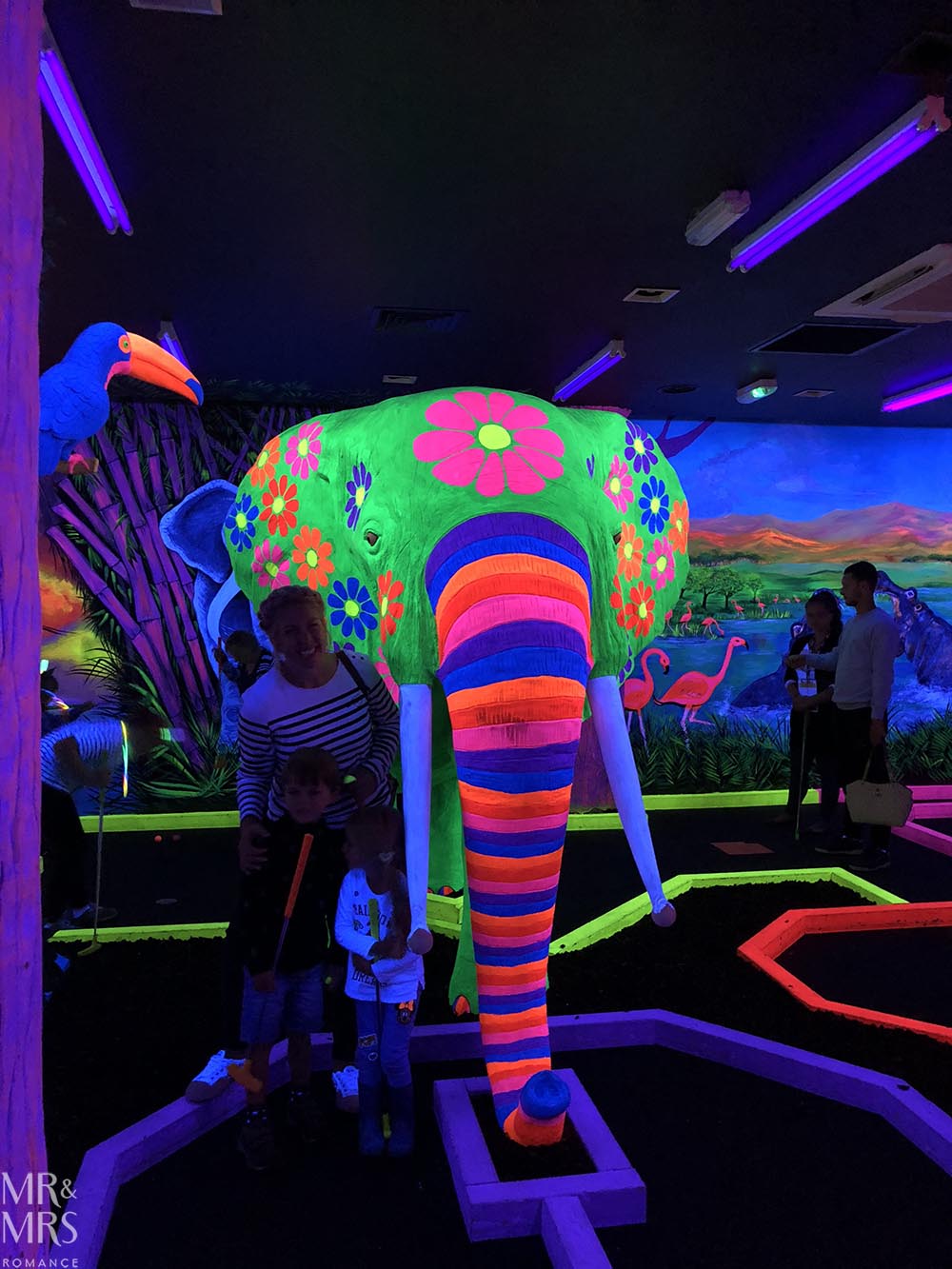 This weekend, we’re really excited to be heading down to Sussex on England’s south coast to meet up with some amazing friends from my university days. I feel so lucky to still have these guys as pals – especially after such a long time.

We were barely more than children when we met. It’s lovely to see everyone with kids of their own now.

Typically, we’ve come to the beaches of Brighton on the one weekend that it’s tipping down with rain. Our wet-weather option though is pretty good. This has to be the most extreme crazy golf course we’ve ever seen. The kids love it – almost as much as the big kids do!

This is Globalls, and it’s a glow-in-the-dark jungle themed course. There’s always a Jurassic Park themed one you can do, but this one’s got a ball pit at the end! 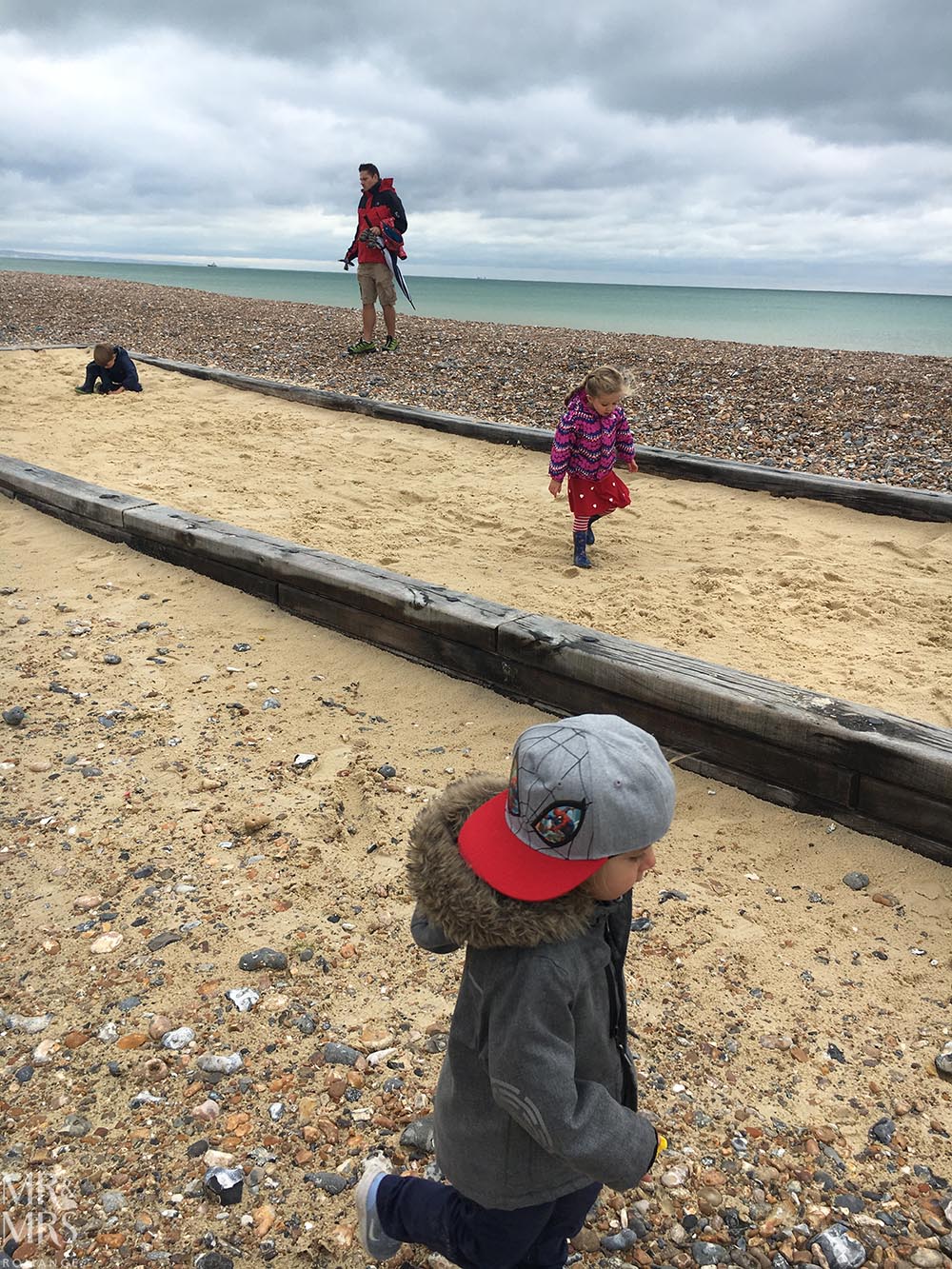 The rain eases up briefly just after breakfast today and the kids pile out onto the beach. They’ve been wanting to have a run around and a play in the sand all day! My mate Wez is dying to get involved in the sandpit. You can tell, can’t you? 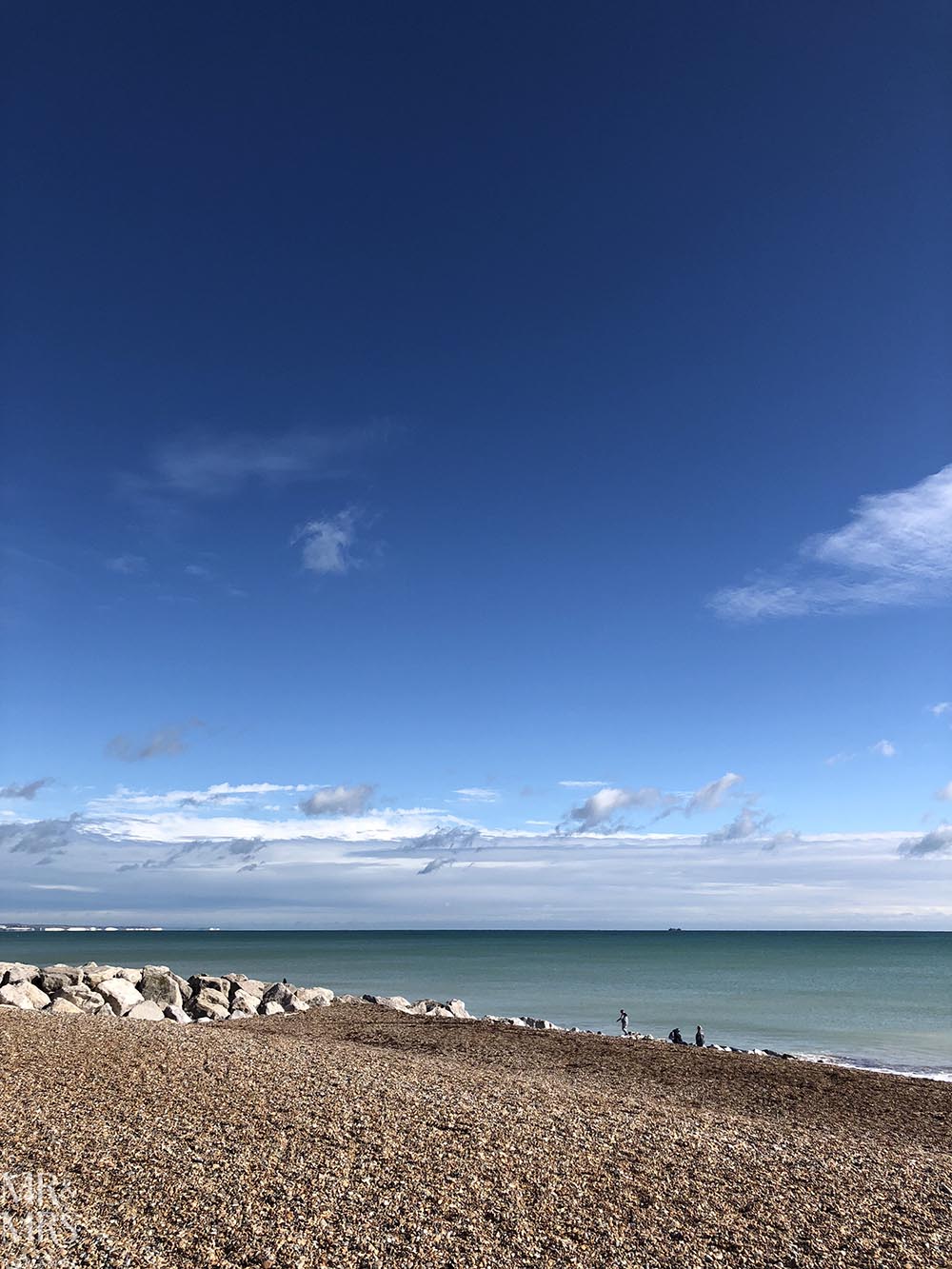 Incredibly, this morning’s rainy weather has gone leaving sunshine and blue skies behind. It might be because Wez has just driven off to head back to Manchester! It’s a long drive for him, but that serves him right for bringing the rain along!

Only kidding. It’s amazing that he could come all the way down to Brighton. to catch up with me and my mates Nick and Adam. Such a great weekend. 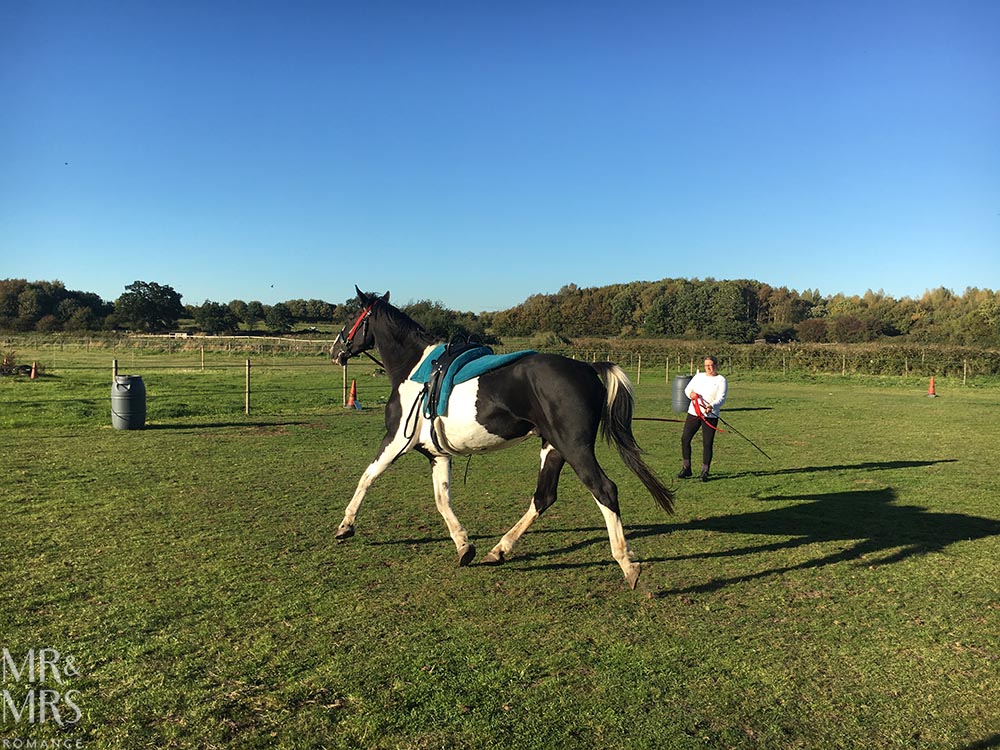 Back in Essex, Christina is out with our friend Clare and her sister Heather getting a bit of horse riding in. Heather has several beautiful horses, and this is her latest equine acquisition. What a beauty. 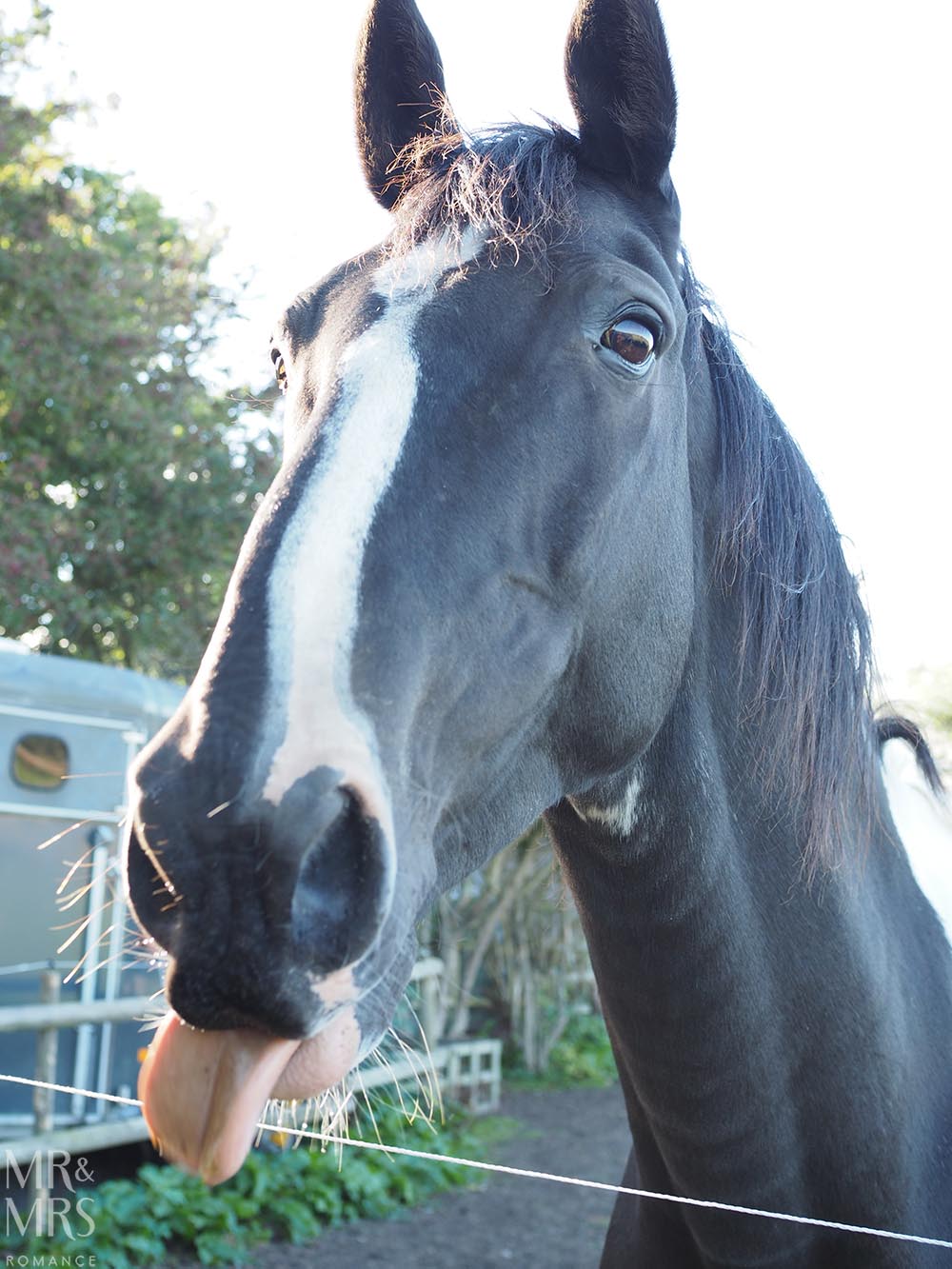 But this face says it all.

Christina fell off him as she was practising on the vaulting saddle. There’s video footage of the fall. It’s quite funny. Especially the part when – as Christina canters round in a wide circle, she can be heard to announce: “I think I’m falling!”

Thankfully she didn’t hurt herself and can see the funny side. In fact she’s asked me to tell you about the whole episode.

After the horse ride, the girls have taken the dogs for a walk on the coast here. The Essex coastline is so pretty – very under-valued.

The dogs are so excited to be having a run around and a swim. Check them out: 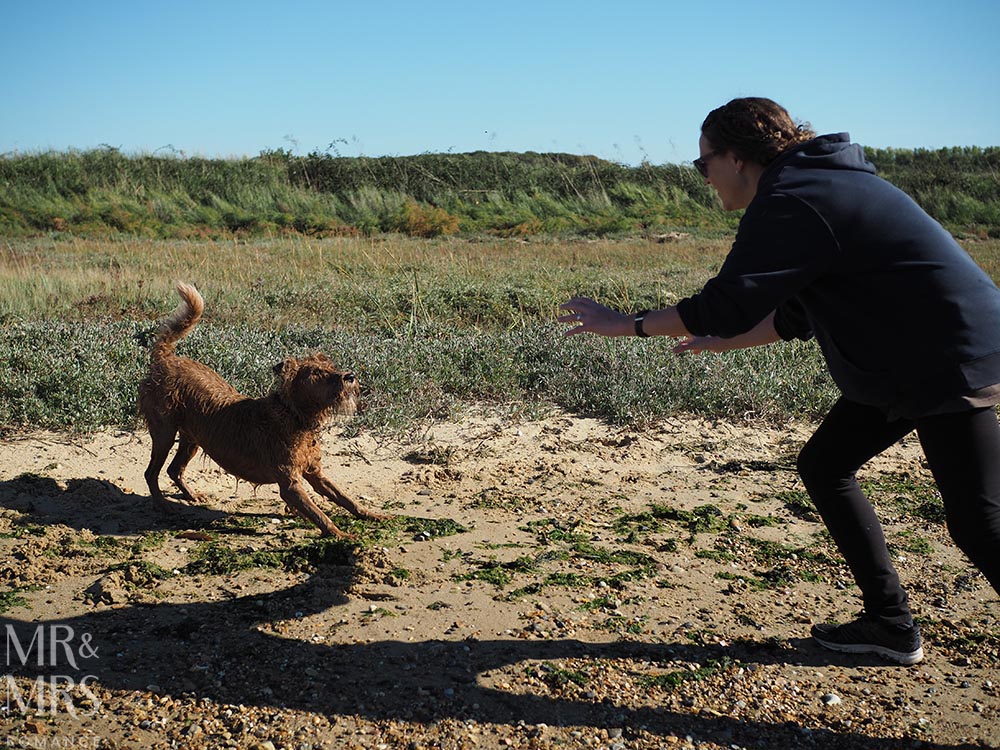 Ruby the Irish Terrier and Clare 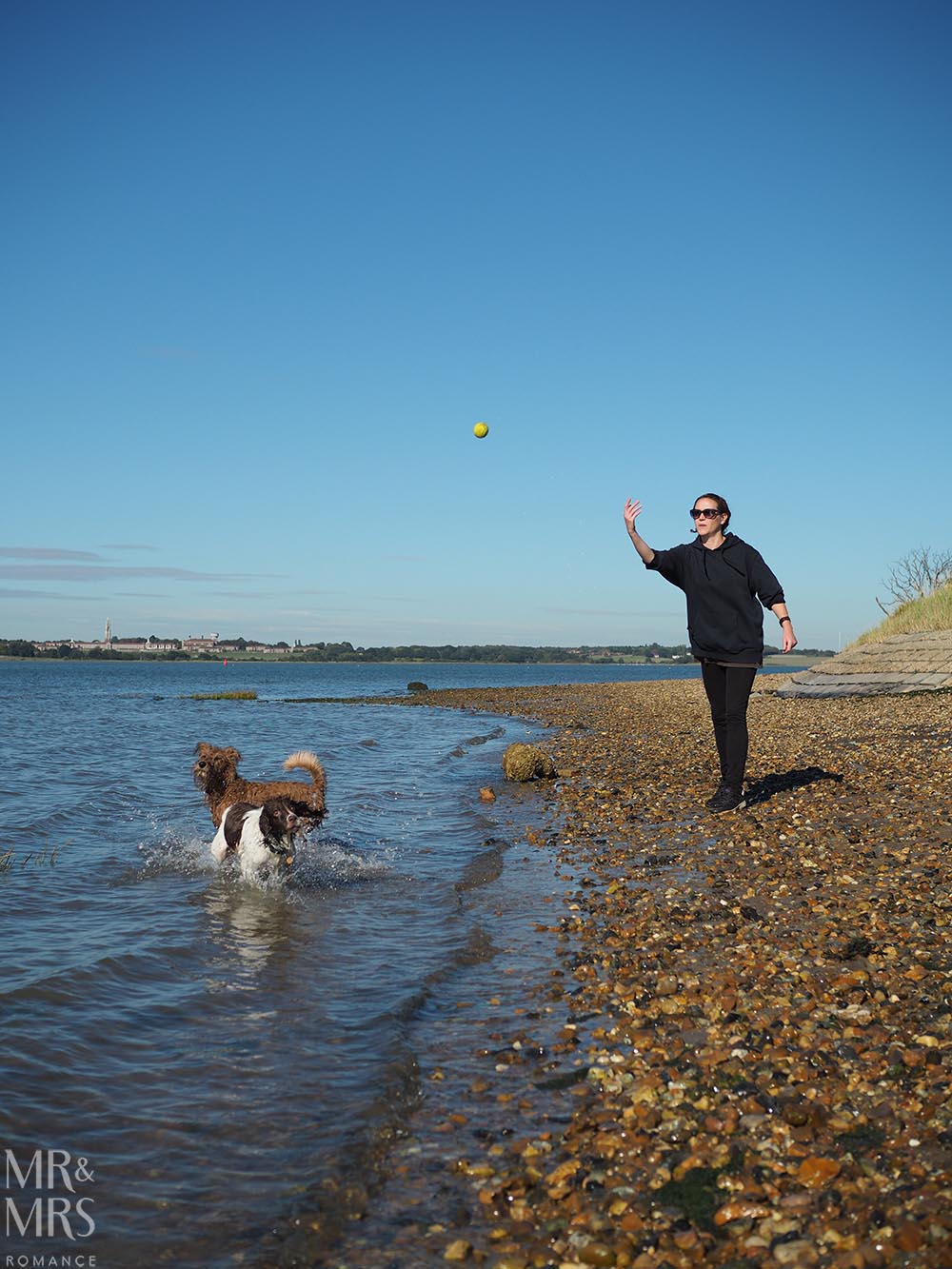 Ruby and Flo chasing one of Clare’s balls. 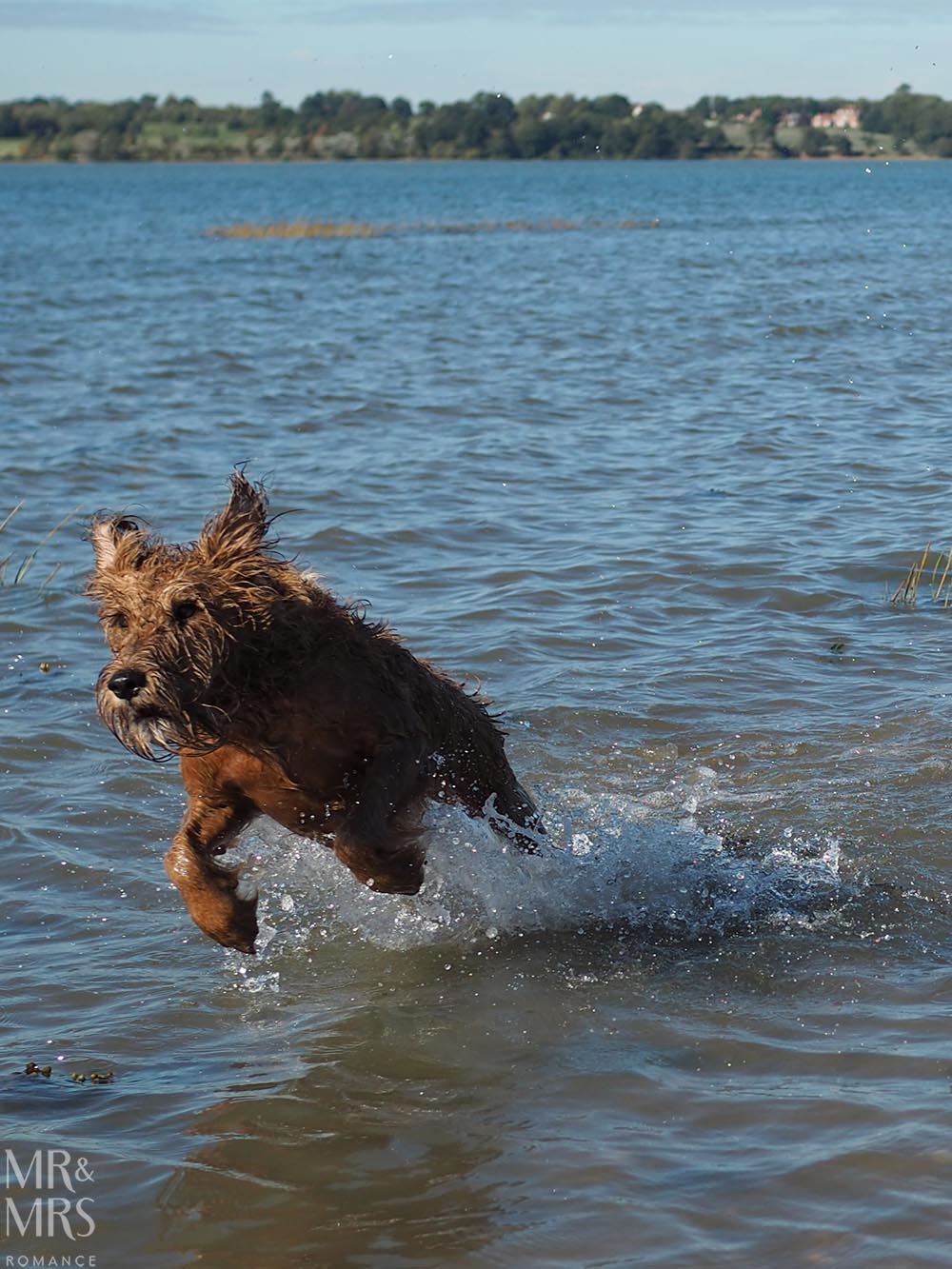 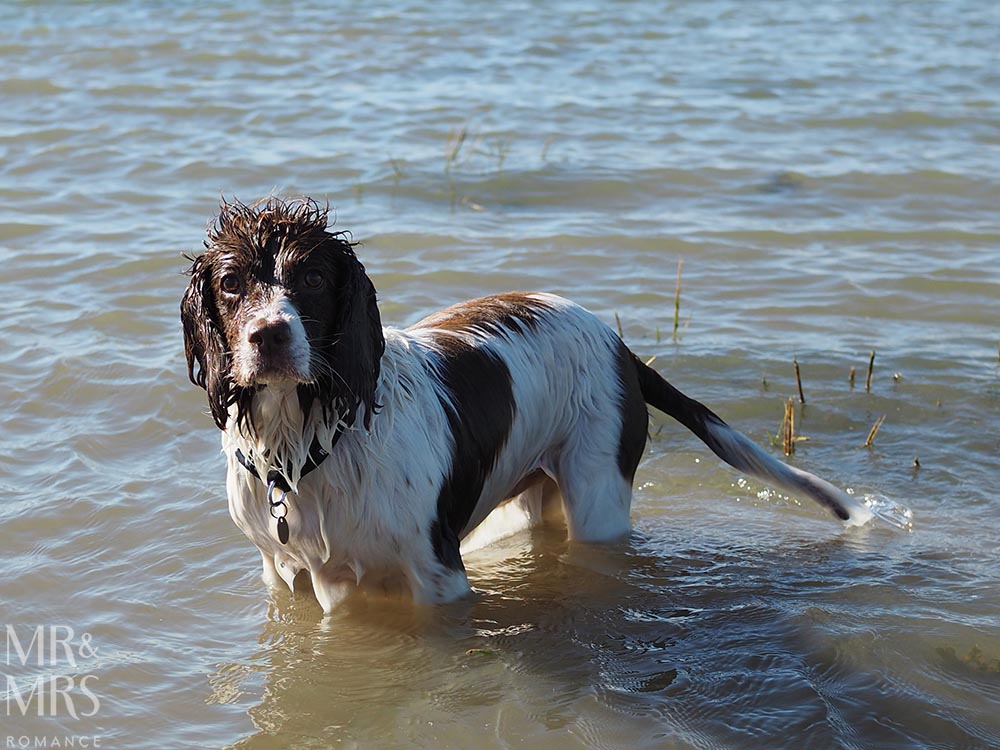 Flo is having a pretty good time!

In spite of Christina’s double stack (she actually fell of twice), everyone’s had a good day. It’s lucky the summer’s still hanging on here. Just. 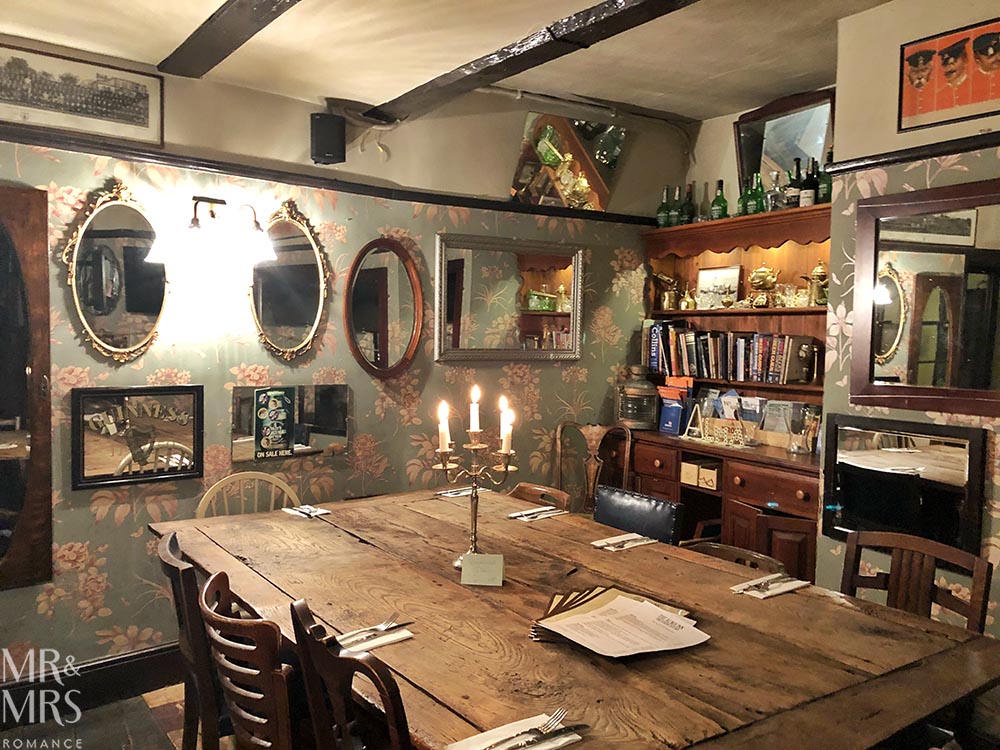 Tonight, we’ve travelled to the old port and fishing harbour town on the Essex coast for a birthday dinner for Dave. The Alba Inn is a little old pub – full of salty seadog charm – that’s been serving beer to fishermen, shipwrights, sailors and harbourmasters since the 1850s.

The main bar is a royster of a room with wooden floors, low ceilings And all the trappings an old ale inn on the shores of one of England’s one-time premier ports. This town was the home port of the Mayflower!

Of course The Alba has changed as much as the town since the good old days, including the dining room. But the aesthetic follows throughout the pub. In fact, this table is made from one of the old doors of the original building. 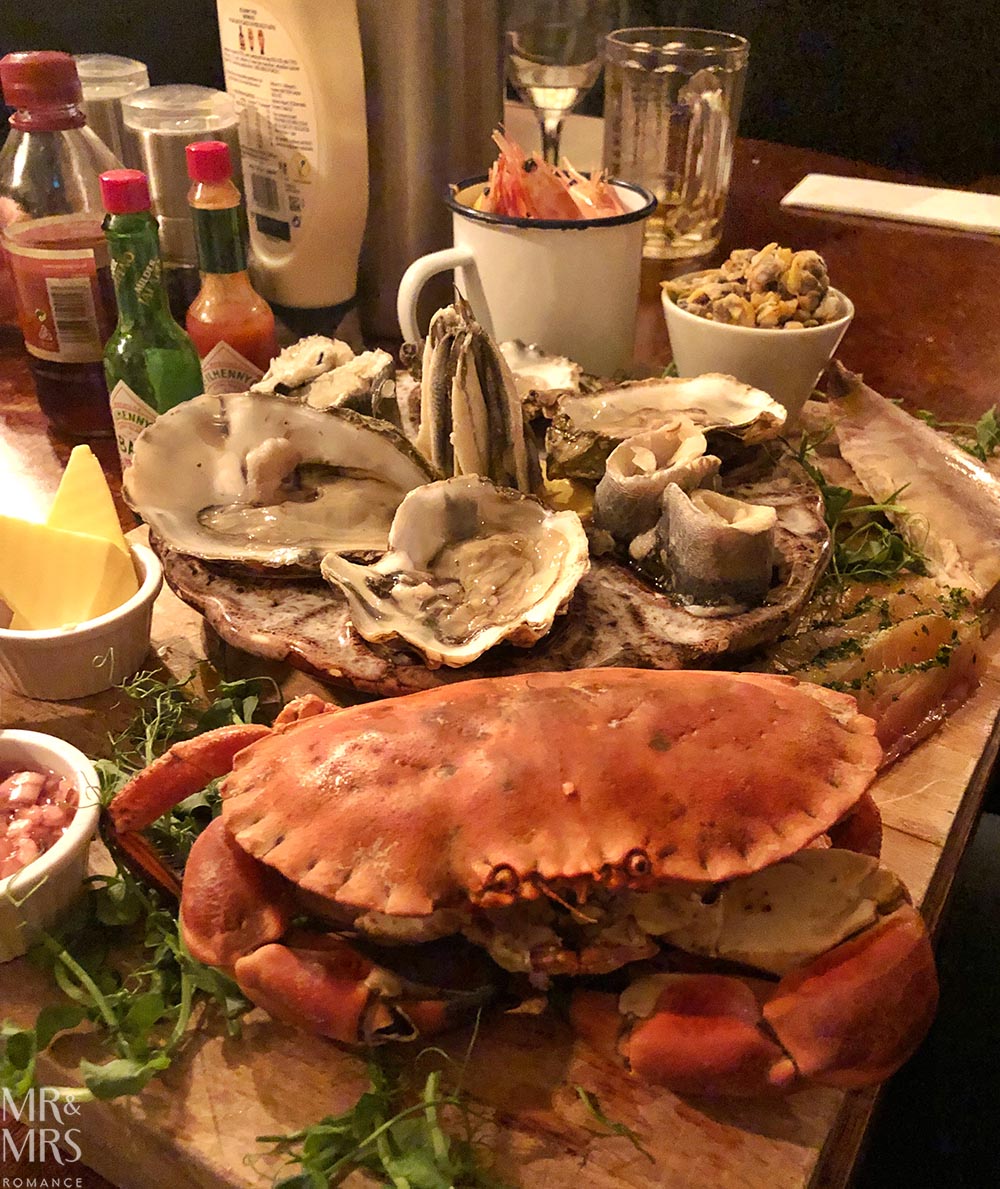 The food here is just as impressive. The seafood platter is generous and satisfying. Des, Clare and Dave’s brother-in-law, is so excited with his order, I only just get a photo before he sets about this crab with gusto! 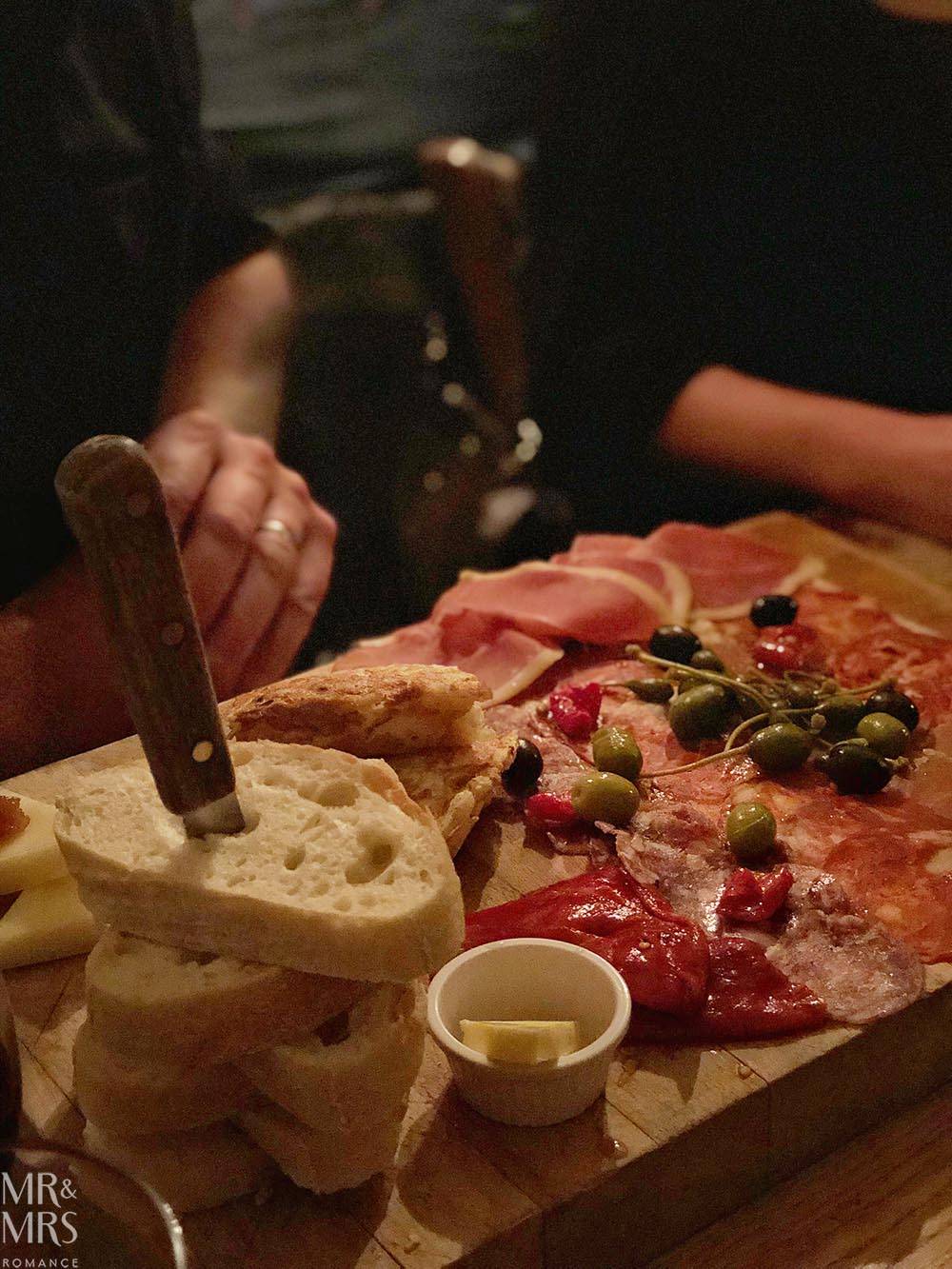 Meanwhile, Dave’s just as gleeful when his salumi platter turns up. The menu recommends these platters are enough for two, but Des and Dave know their capabilities. There’s no fear in their eyes and there’s not much left on their plates by the end either! 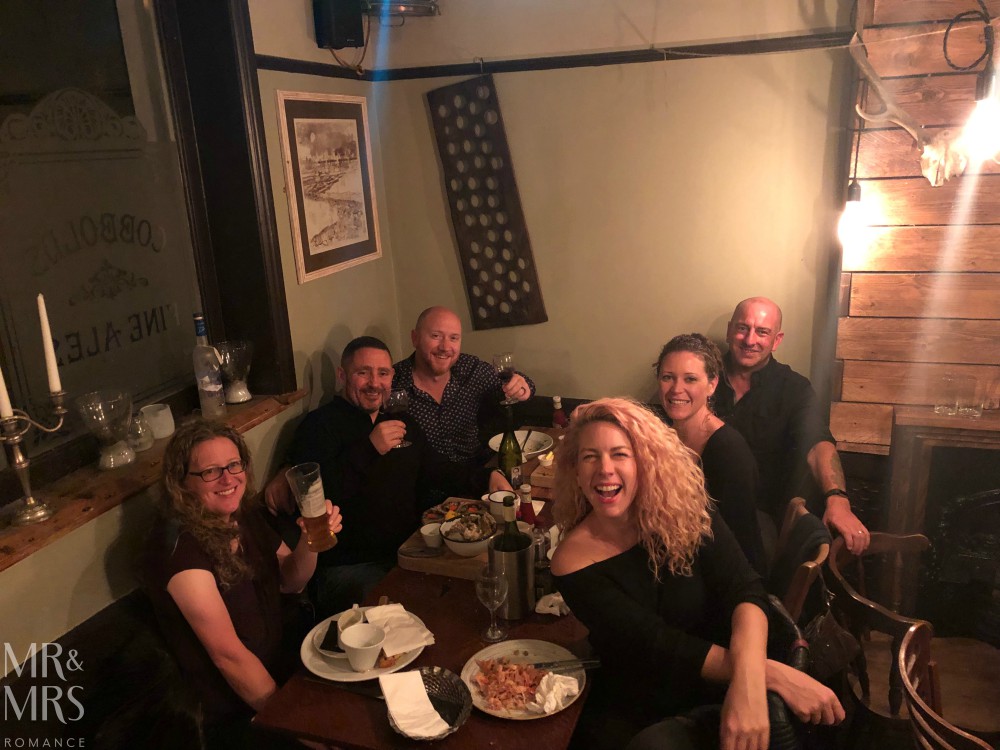 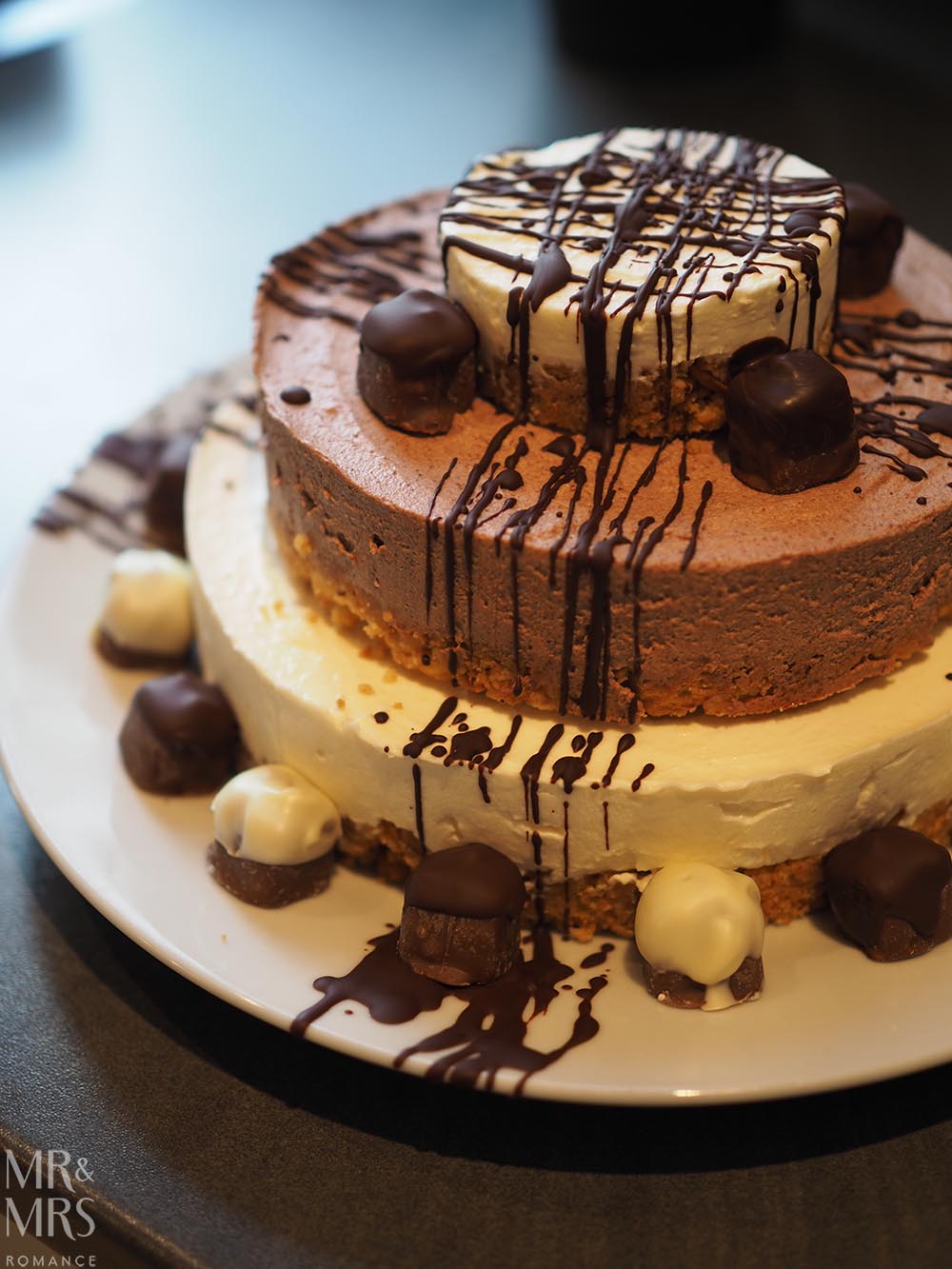 And there’s cake! Of course there’s cake. But this one’s pretty special. Clare is a cheesecake genius and develops new recipes every time we’re in town.

We’ve shared one of her creations before – check out this beauty: the Tim-Tam-tastic Cheesecake 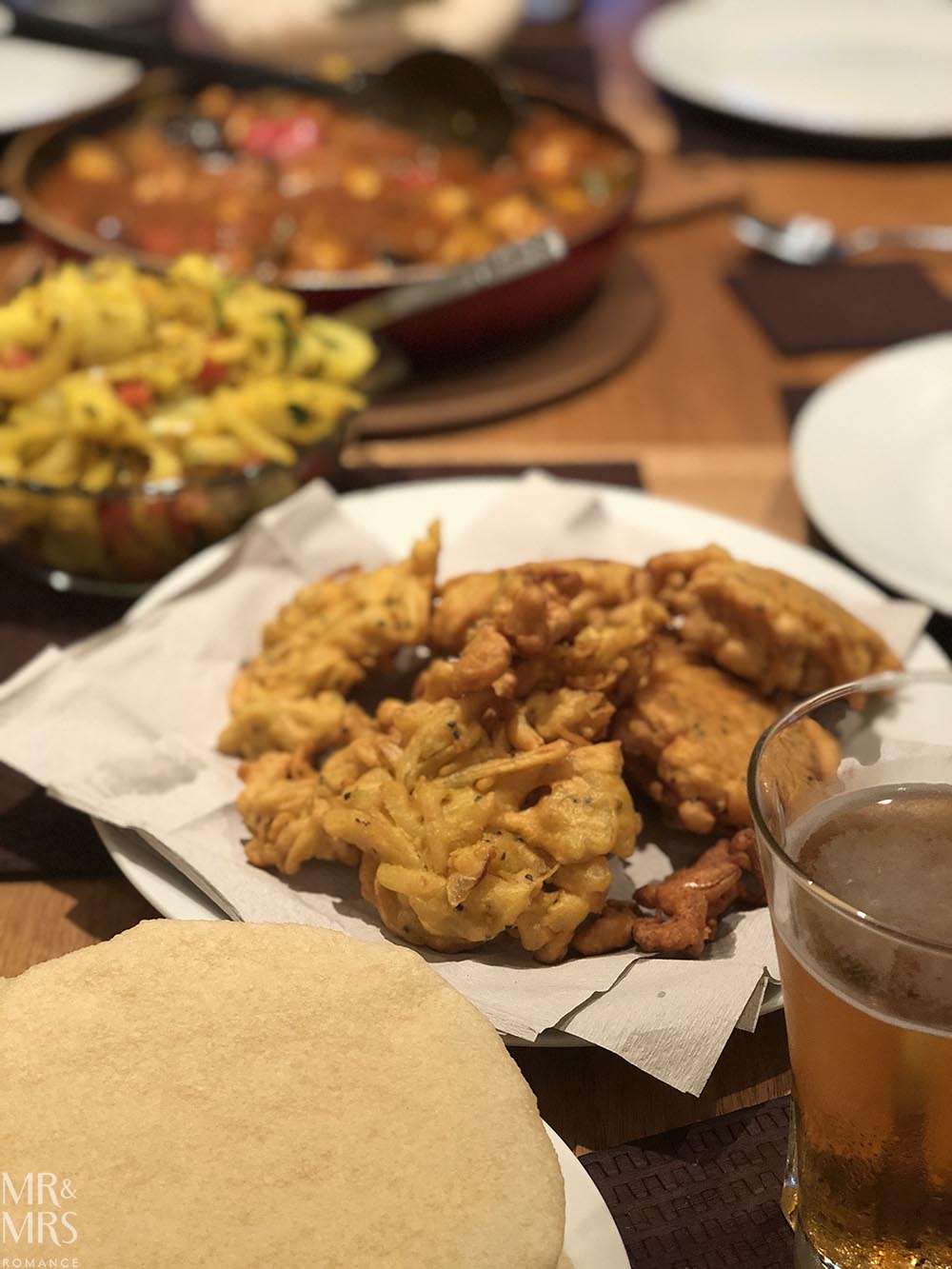 Tonight, Dave’s in the kitchen again and he’s decided to put together an Indian feast. My mum and dad had the great idea of buying him a curry kit from their favourite spice store in Sudbury – Raffi’s Spicebox. You can put together any mix of curries and spices you want here, which is pretty cool. 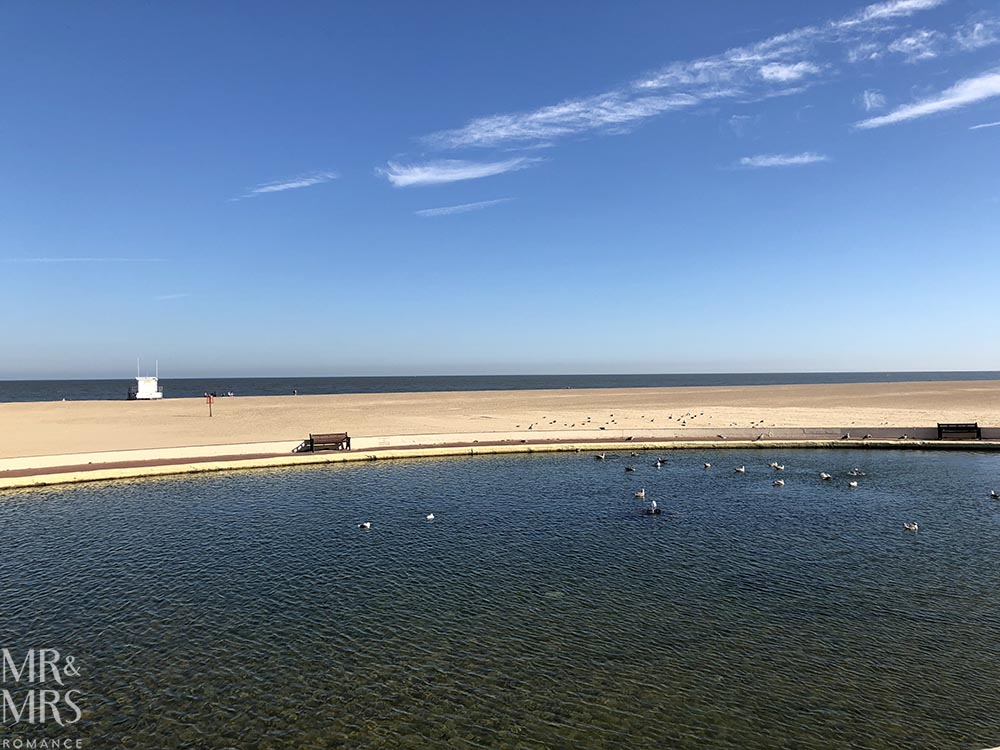 The sun’s out again in Anglia today, so we’re on a little road trip with Mum and Dad. We’ve come to Norfolk, which is still on the east coast but further north. It’s actually level with Leicester if you know England.

We’ve come to the little seaside town of Gorleston-on-Sea, which is… random. But it’s very pretty here and it’s good to get some sea air. Apparently, it’s the sight that the first moving picture was filmed in East Anglia in 1896, which is… also random. You can see the footage here, but don’t expect anything too blockbuster. 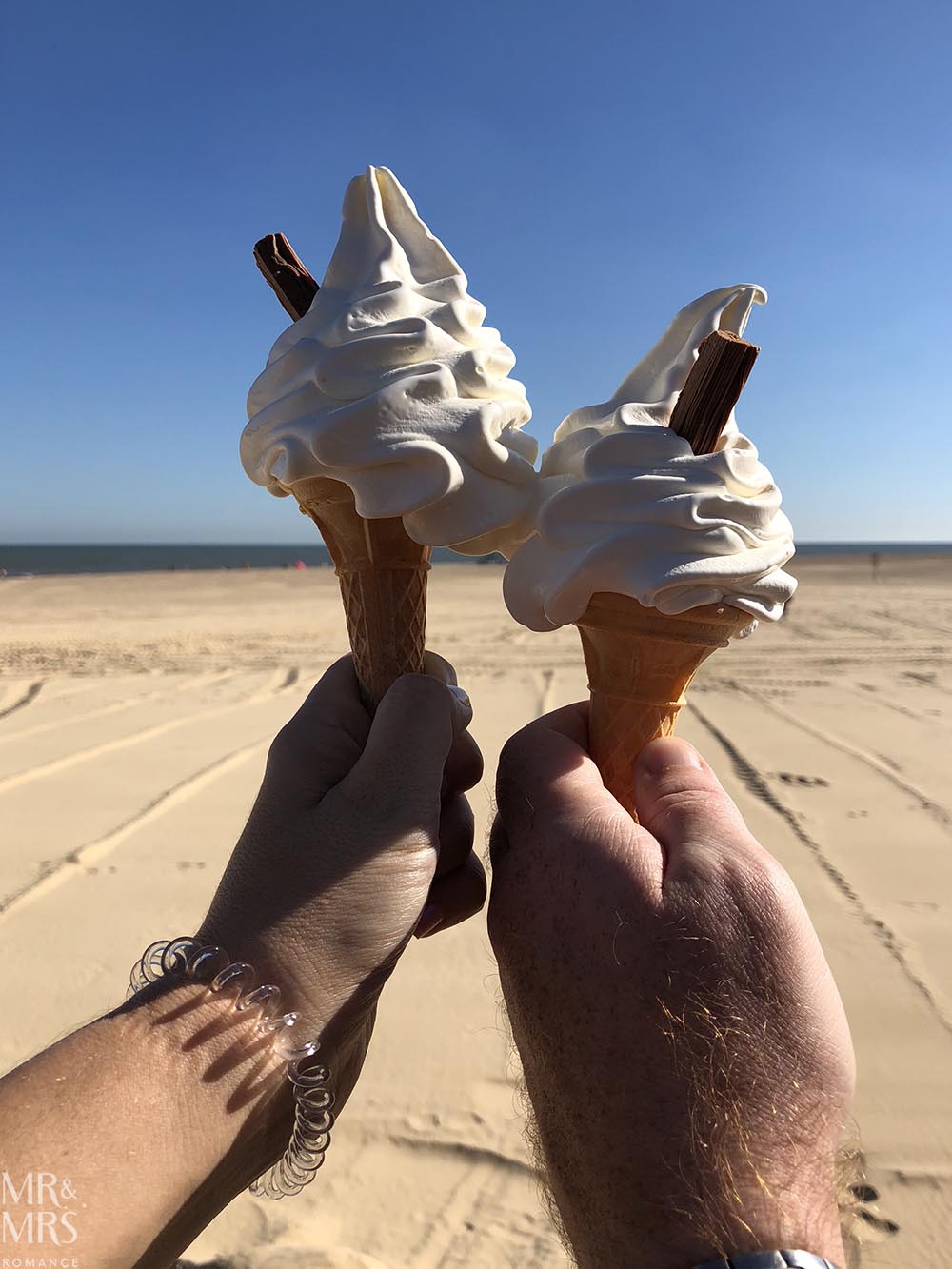 Of course, it’s not a trip to the seaside without an ice cream! 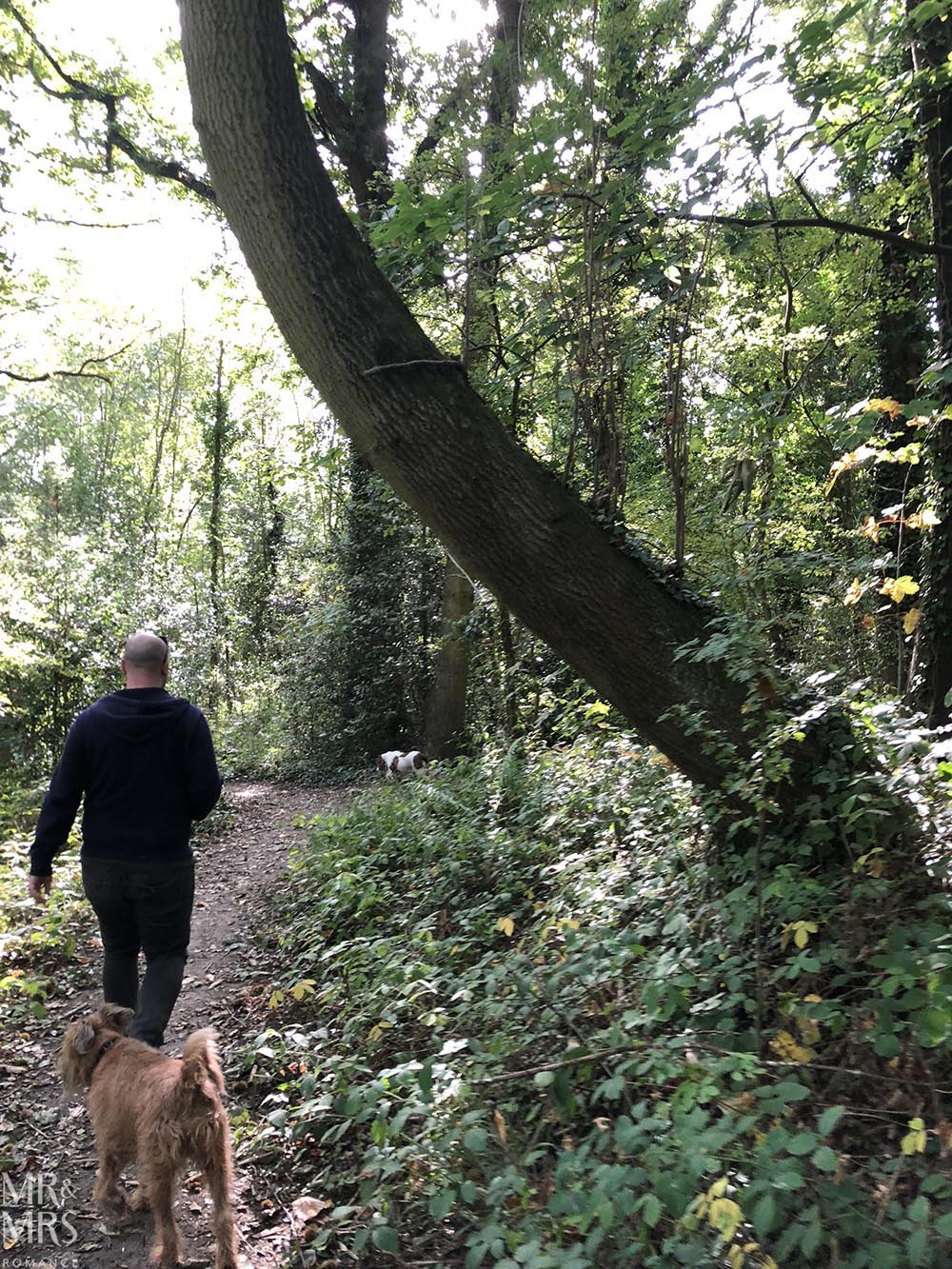 Clare and Dave’s dogs love a good walk in the woods, so we’ve taken them to one that I used to come to a lot when I was a kid. The little riverside town of Wivenhoe in Essex has a beautiful old woodland that – if you’re ever in the area – is worth a walk through. 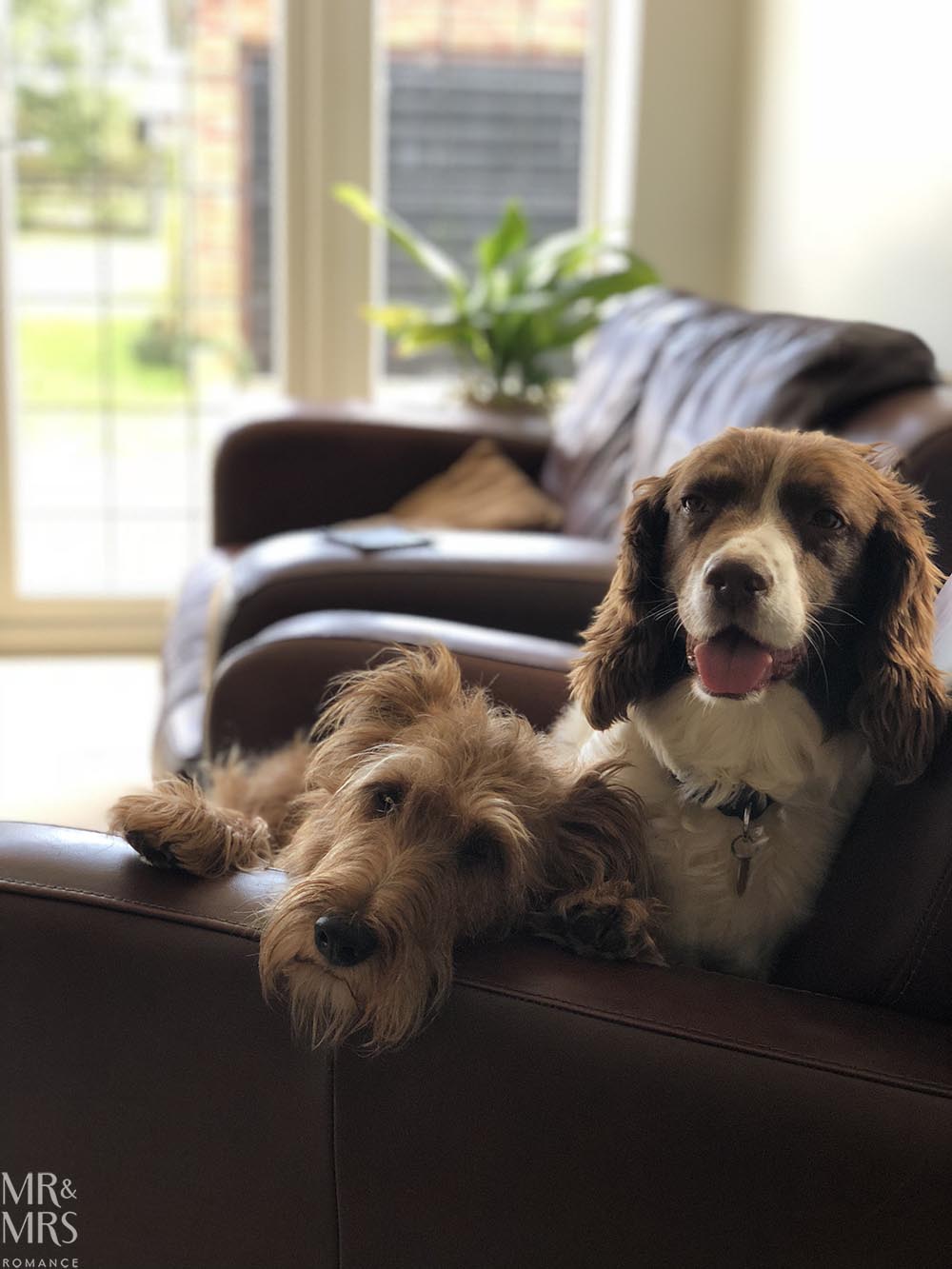 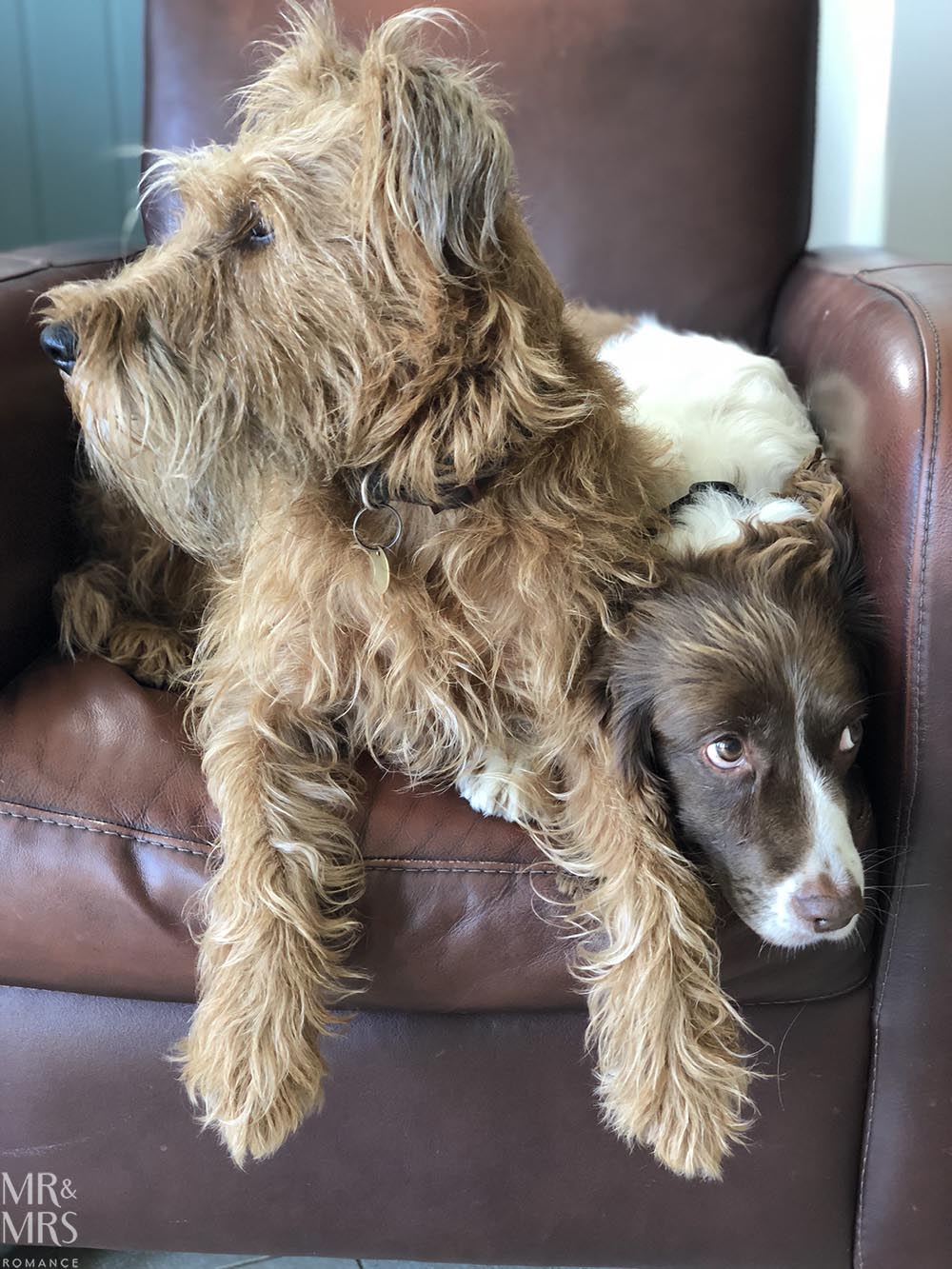 I think Ruby and Flo have enjoyed their walk. Now it seems it’s time to act a little cute. It must be time for dinner! 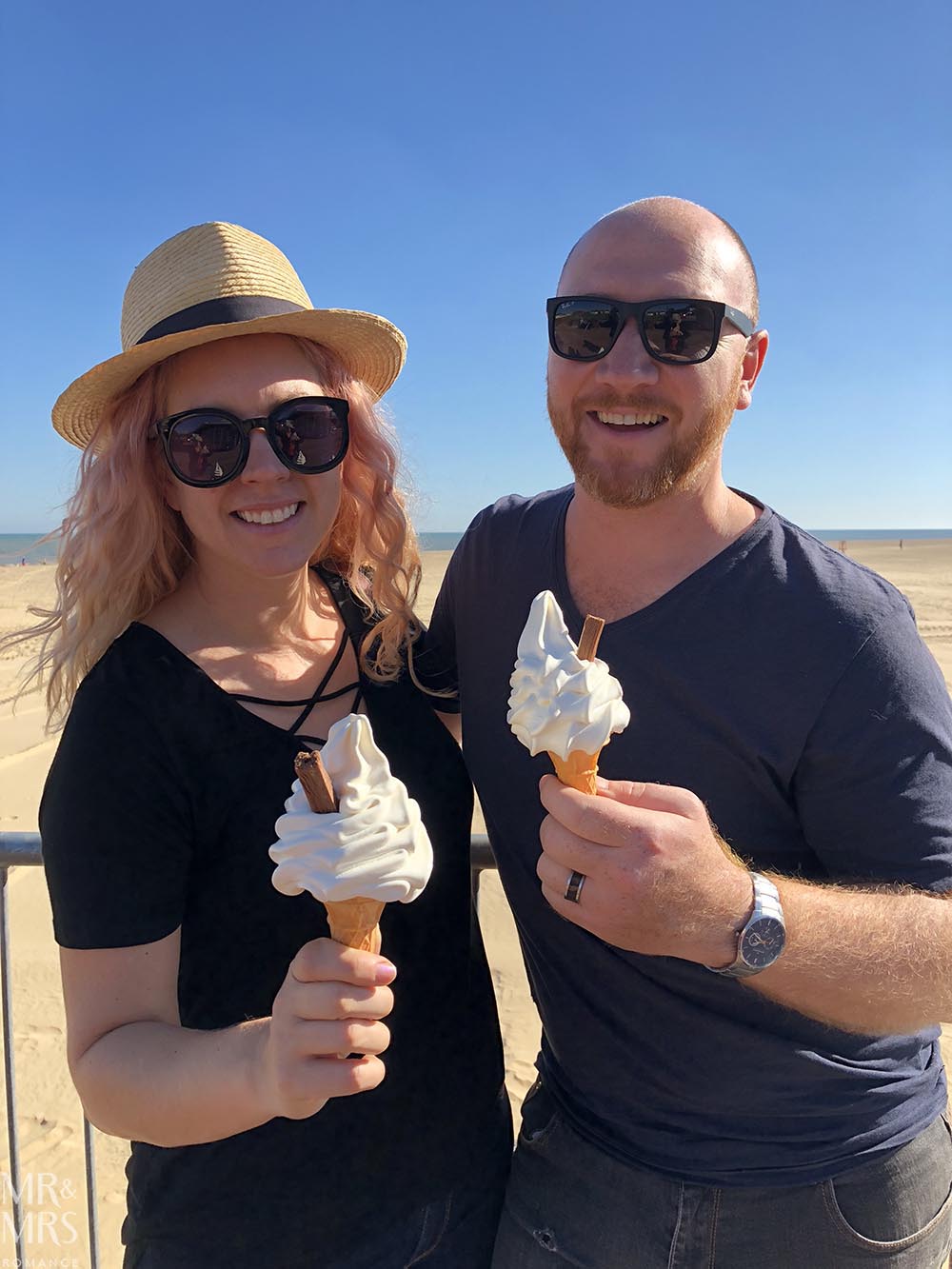 We hope you’ve enjoyed our Weekly Edition and our journey through 4 different counties of England. It’s certainly been fun for us!

From the moment you arrive at Aleenta Phuket, you get the feeling you’re somewhere special. The water garden that runs under the walkways, the…