; Mysterious Cities of Gold - Maya ruins of Mexico to visitMr and Mrs Romance

For thousands of years, the Maya civilisation ruled Mexico. Their cities, temples and fortifications dot the landscape, leaving us to wonder at an advanced ancient society whose mystery and legend are the very bones of a nation. 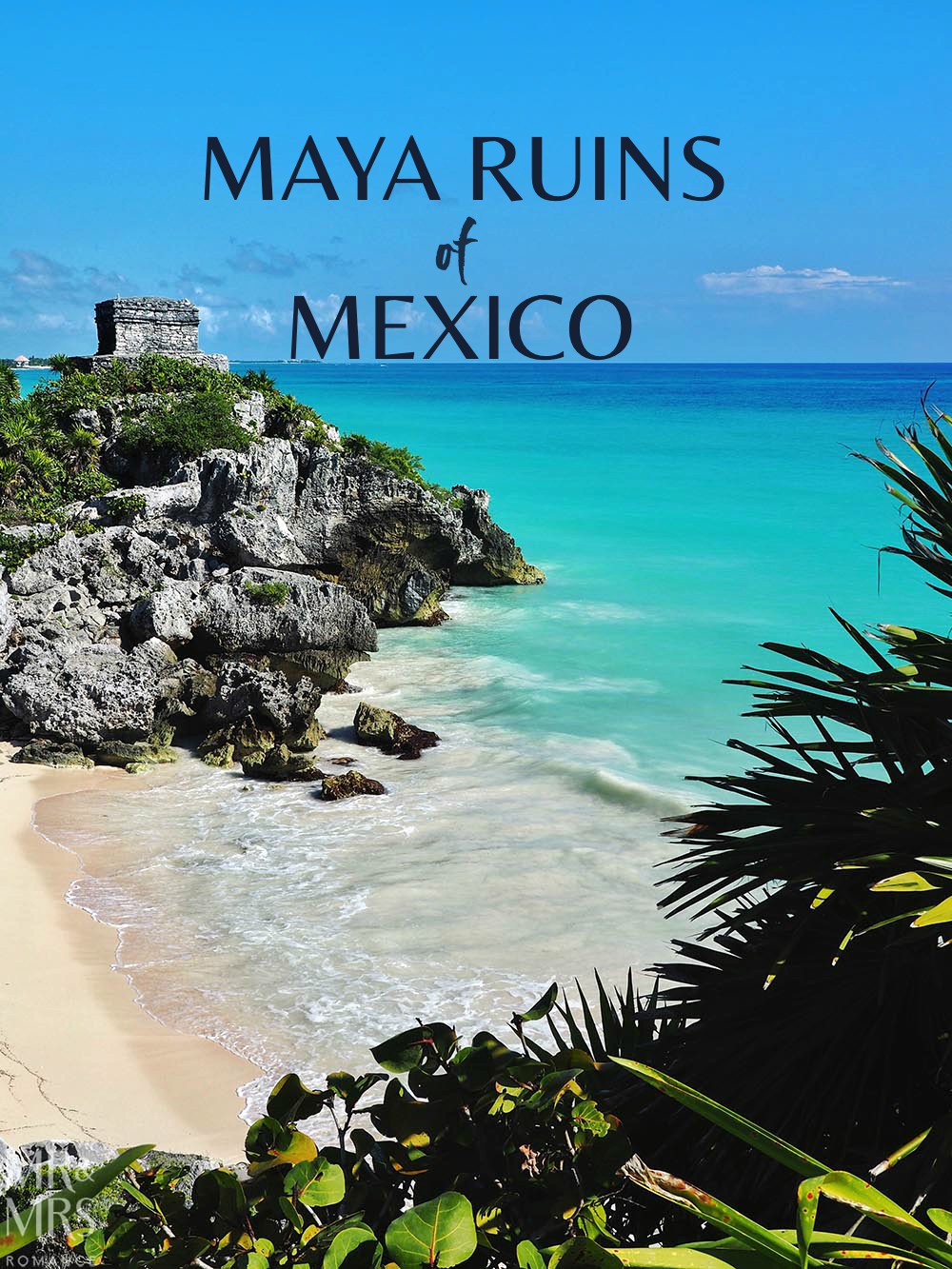 In the far eastern spur of Mexico, almost touching the arm of Cuba, the Yucatan Peninsula hugs the southern Gulf and reaches into the Caribbean Sea.

This jungle-filled province is home to many thousands of relics the Maya built for their reign over Mexico and most of Central America.

Here are two significant archaeological sites of the Yucatan we visited while in Mexico. Once thriving cities of the Maya, now merely the white bones picked clean by time. 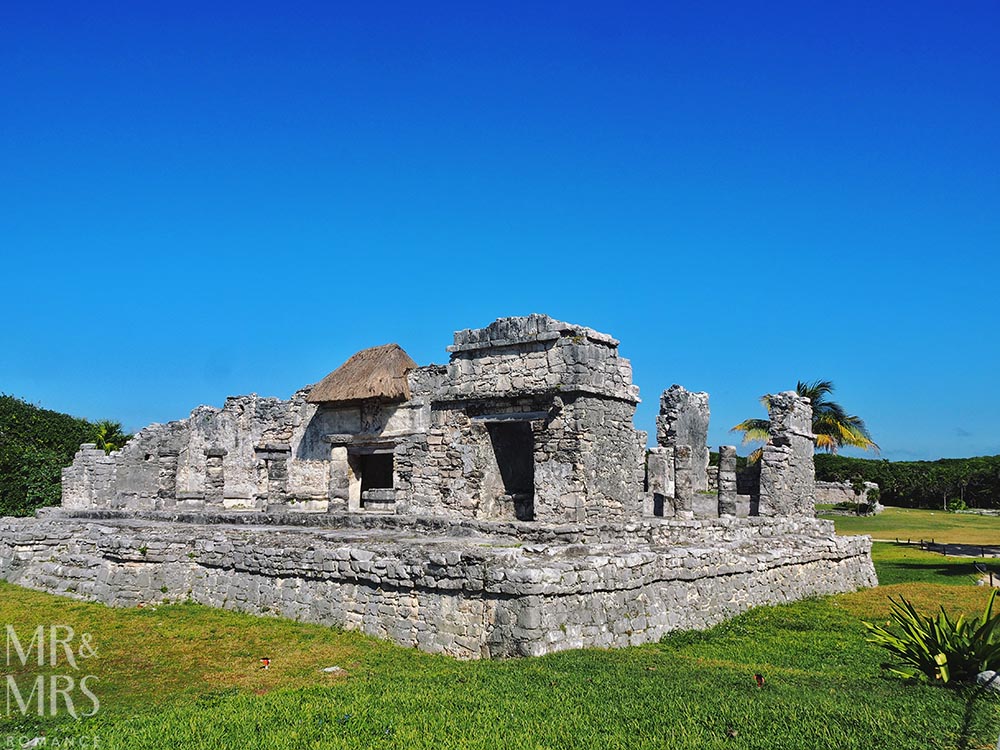 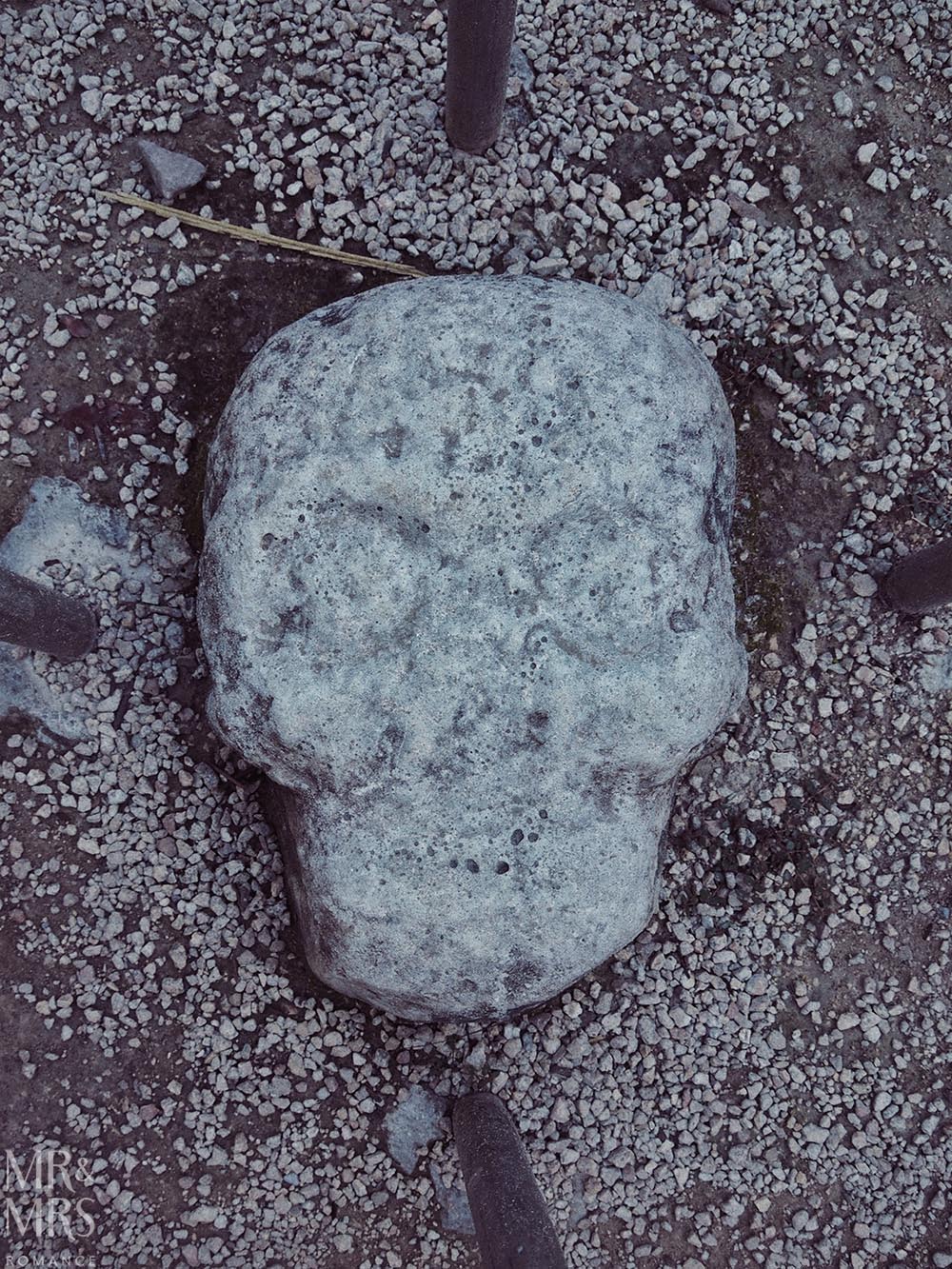 Zamá – the City of Dawn, Tulum

With the bright blue of the Caribbean sparkling beside us and the white gravel path crunching beneath our feet, we emerge from a low stone doorway.

We are walking through history.

Beyond the doorway built into a three metre deep stone wall are the ruins of Tulum’s ancient Maya town and its clifftop citadel. 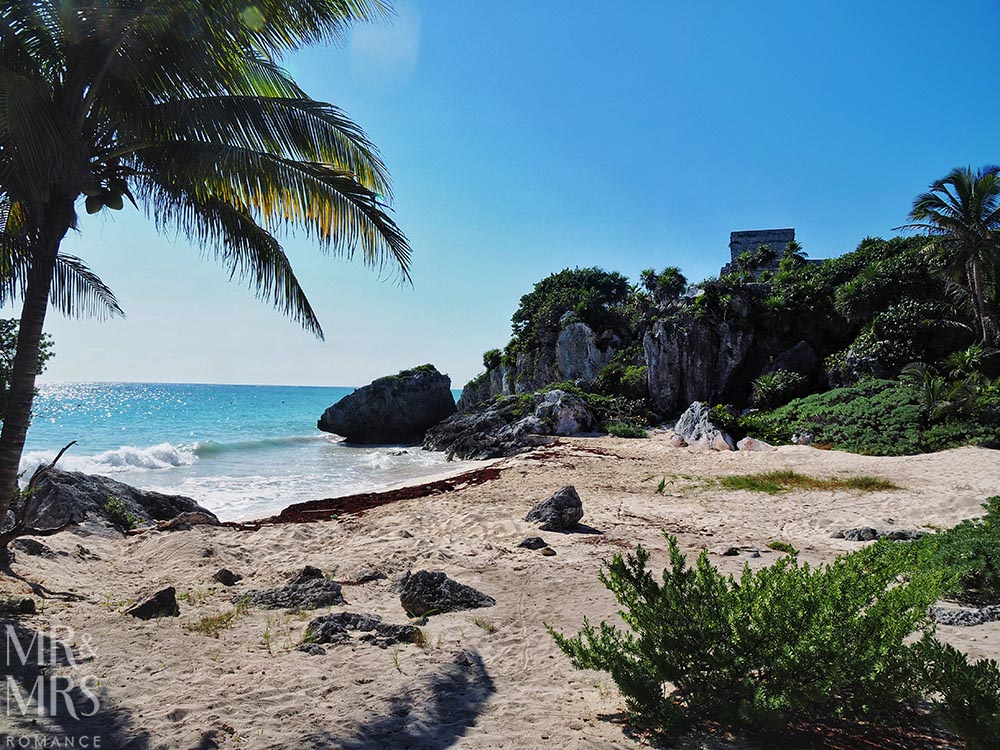 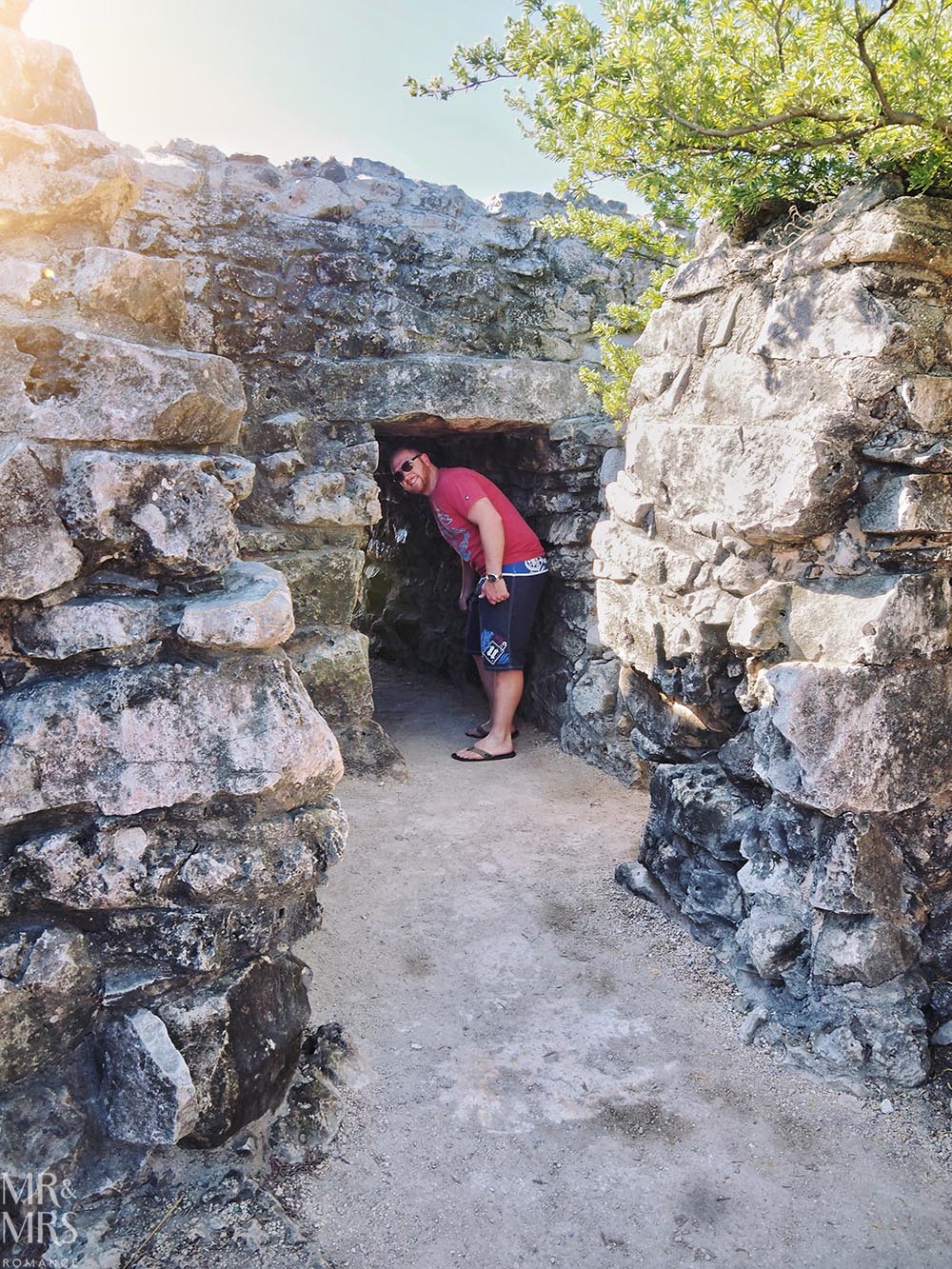 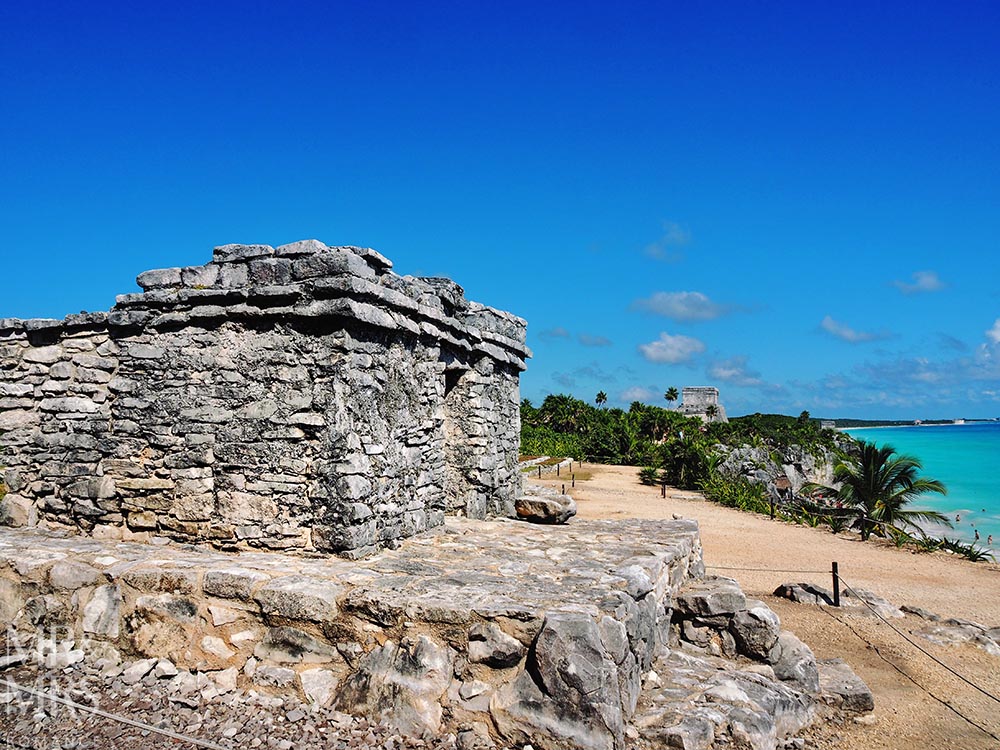 In fact, this wall and the imposing ‘El Castillo’ are where Tulum gets its name.

Roaming the archaeological avenues woven between stones and pillars of this ancient walled city, we completely forget about the view across the sea that has captivated our attention up until now.

It’s not until we’re looking back across the cliffs to see the glimmering white sand of the Playa Ruinas that we once again remember that this Mayan ruin is the only one if its kind to sit on the coast. 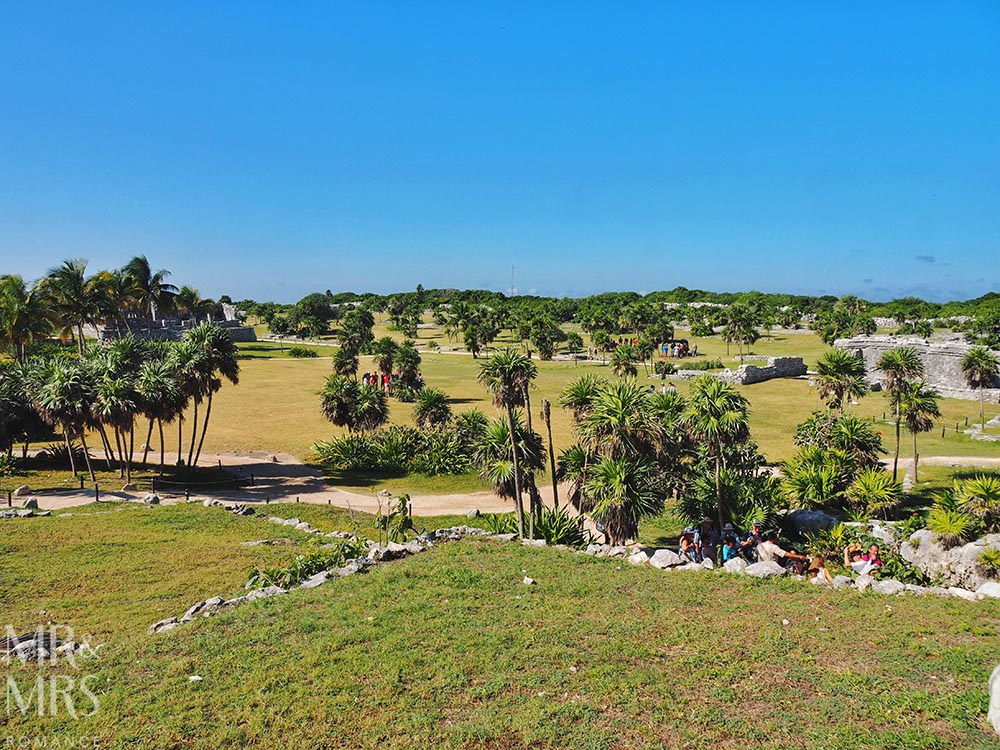 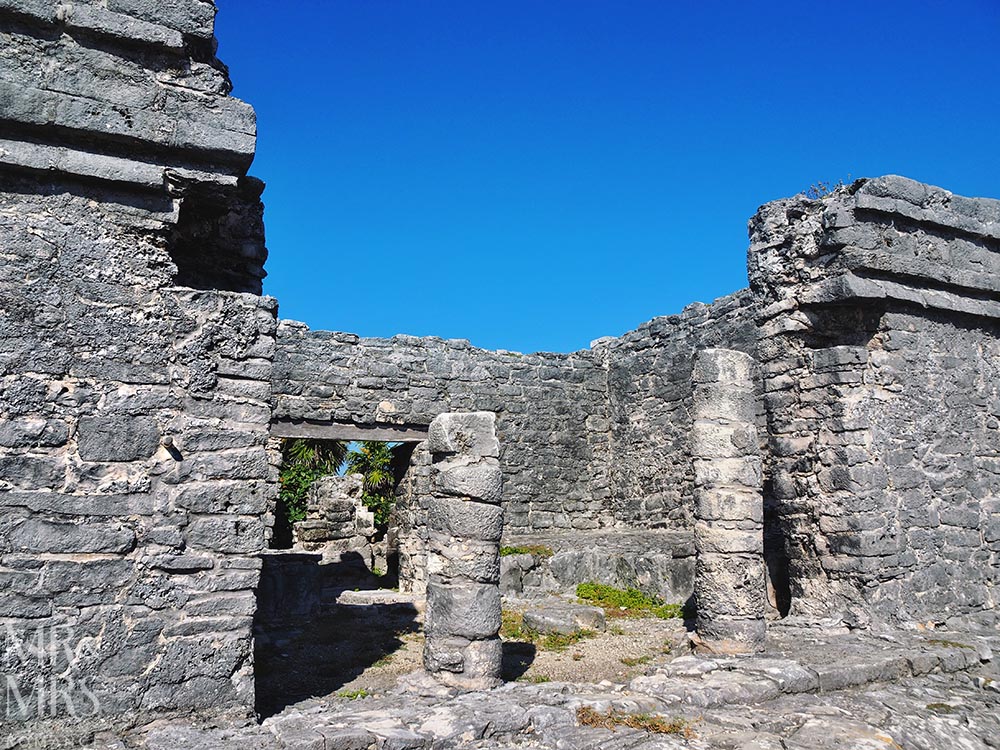 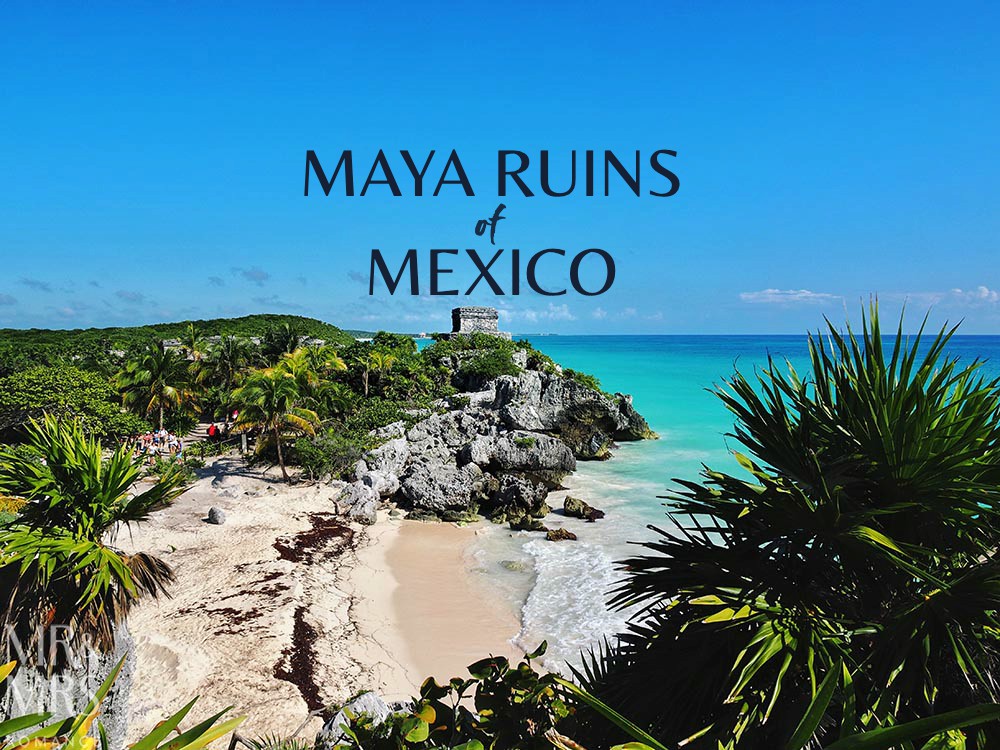 All other Maya ruins are tucked away in the dark confines of jungles.

Here, the squat yet elegant fort sits in the most striking of contrasts to the swirls of soft sand sifting through the gentle eddies of the Caribbean shores.

Built with nothing but the strength of Mayan hands so long ago, it’s an interesting paradox that this age-old view has captivated so many on Instagram. 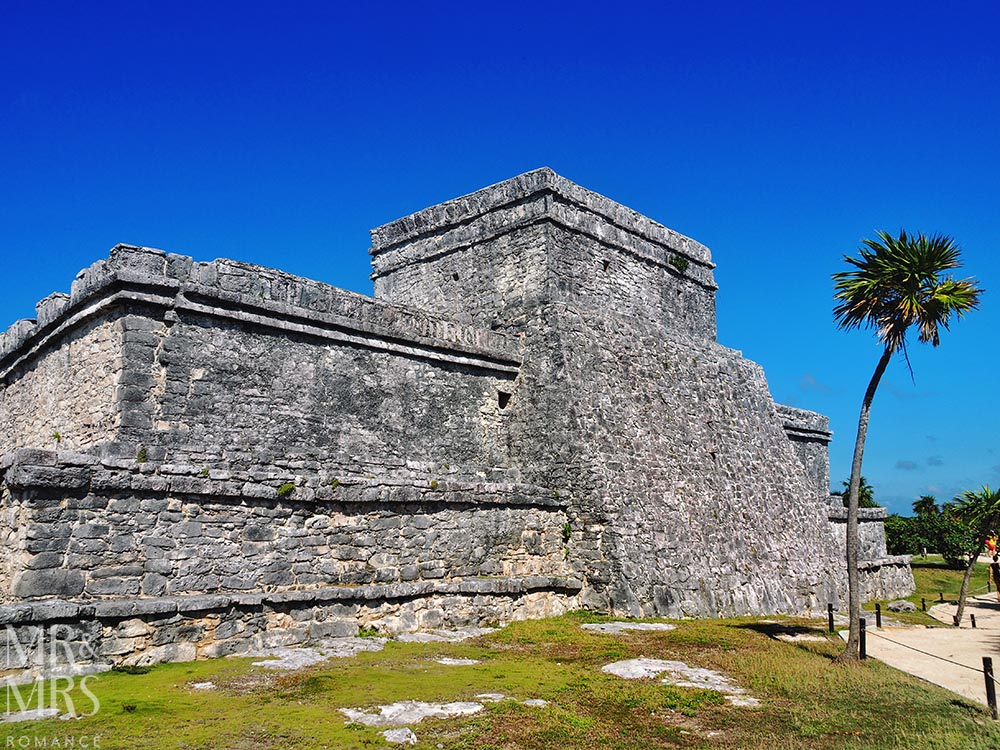 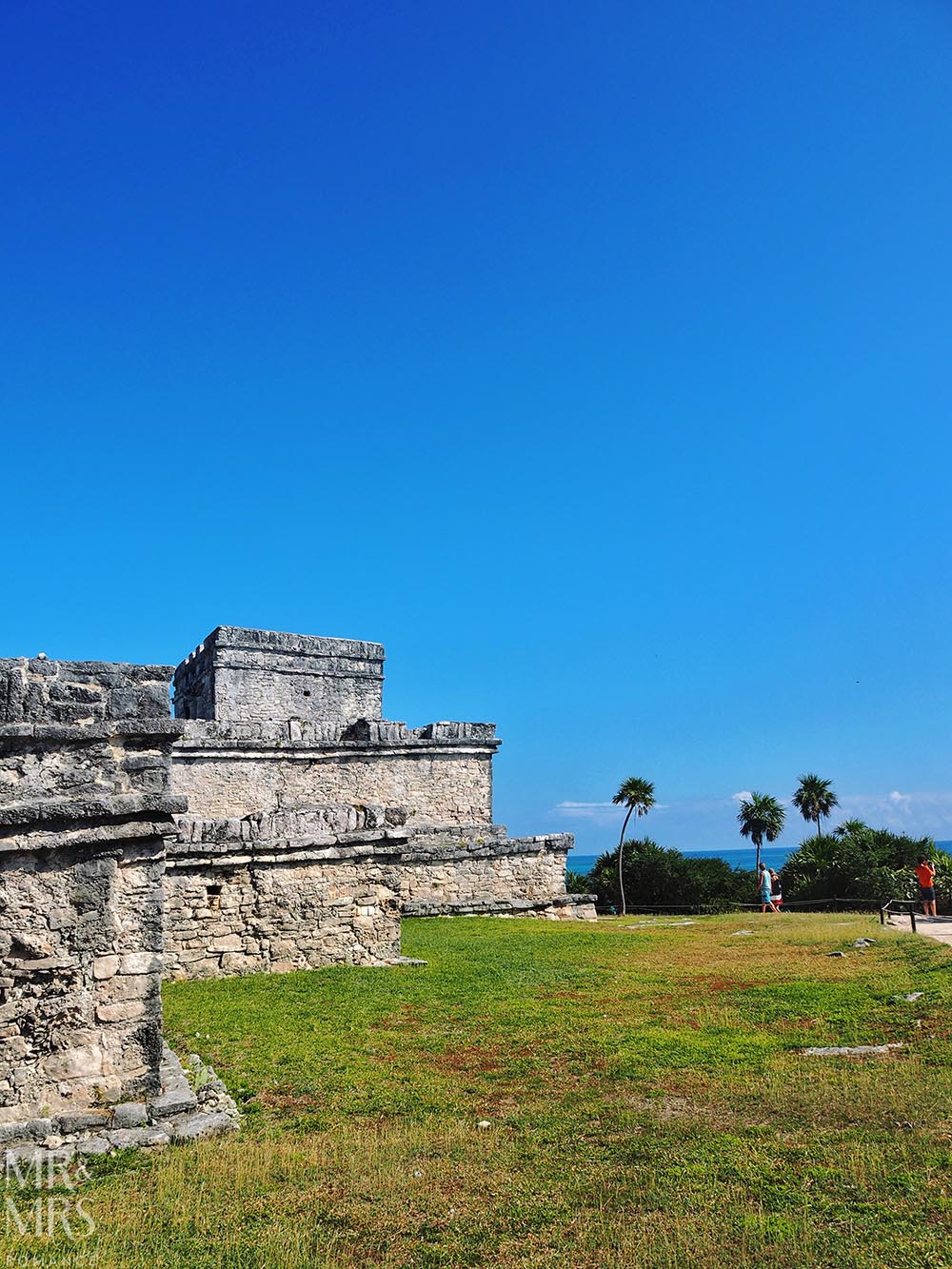 Cobá – the City of Broken Water

As we step aboard our rickshaw, I can only feel apologetic and grateful to the man at the pedals. We’ve taken too long to get here from Tulum and now we have to hurry our way through this incredible place of ancient culture.

Not that arriving early would help that much though.

This city of Coba was – and still is – vast.

It would take a whole week to explore all the grey ruins of this mighty place. But in the heat of the ailing afternoon sun, we roll along the many white-pebbled sacbé – the pathways throughout the city – admiring and trying to comprehend the magnitude of this place. 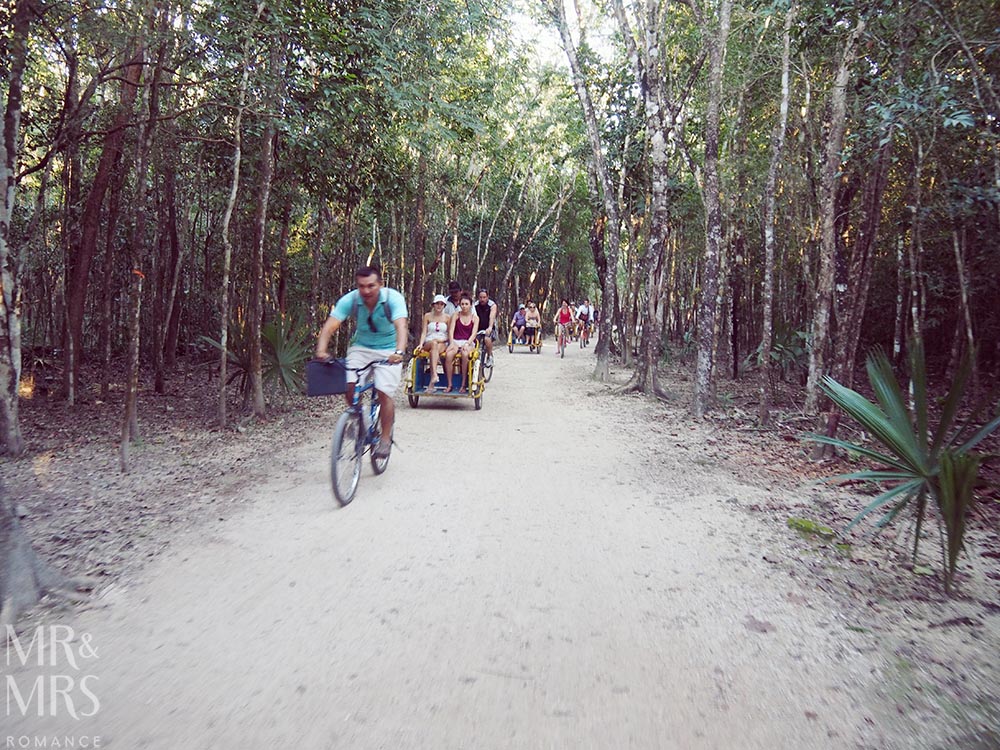 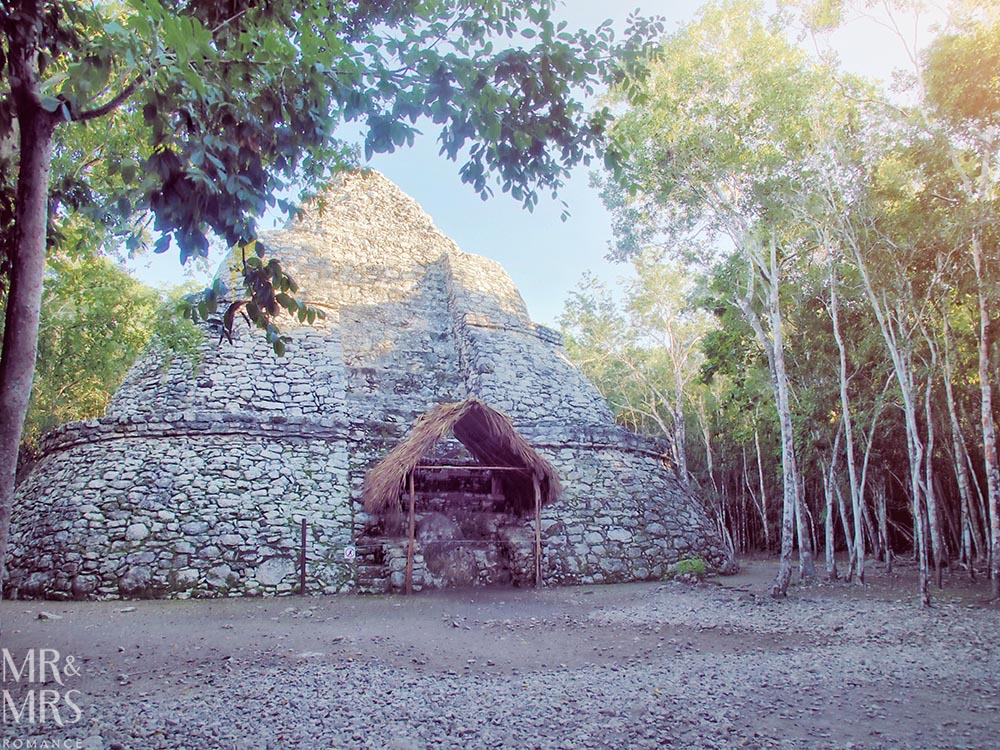 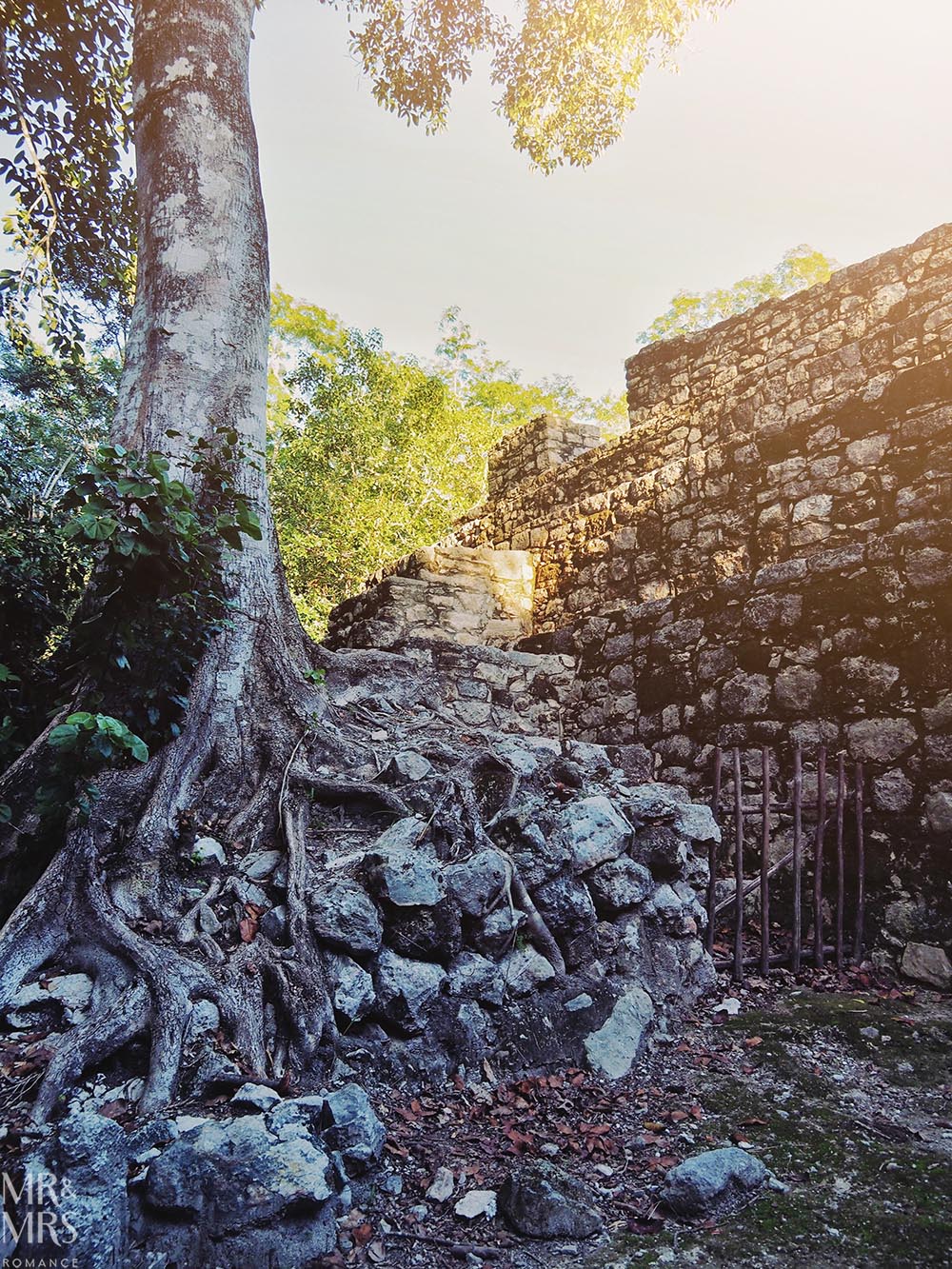 There’s an unpolished beauty to Coba. It feels as it must have felt soon after the early explorers discovered these ruins. As the jungle parts, you’re welcomed and at the same time admonished by the scale of this spectacle.

No truer is this than when you first see Ixmoja – Nohoch Mul as people call it.

What once would have been the grandest of all of the Maya temples in Mexico is now half shrouded to its shoulders by dense foliage. Once side has crumbled, while the other, still with its iconic stepped pyramid shape, faces the afternoon sun.

This is the highest pyramid in Mexico and, incredibly, you’re allowed to climb to the top. 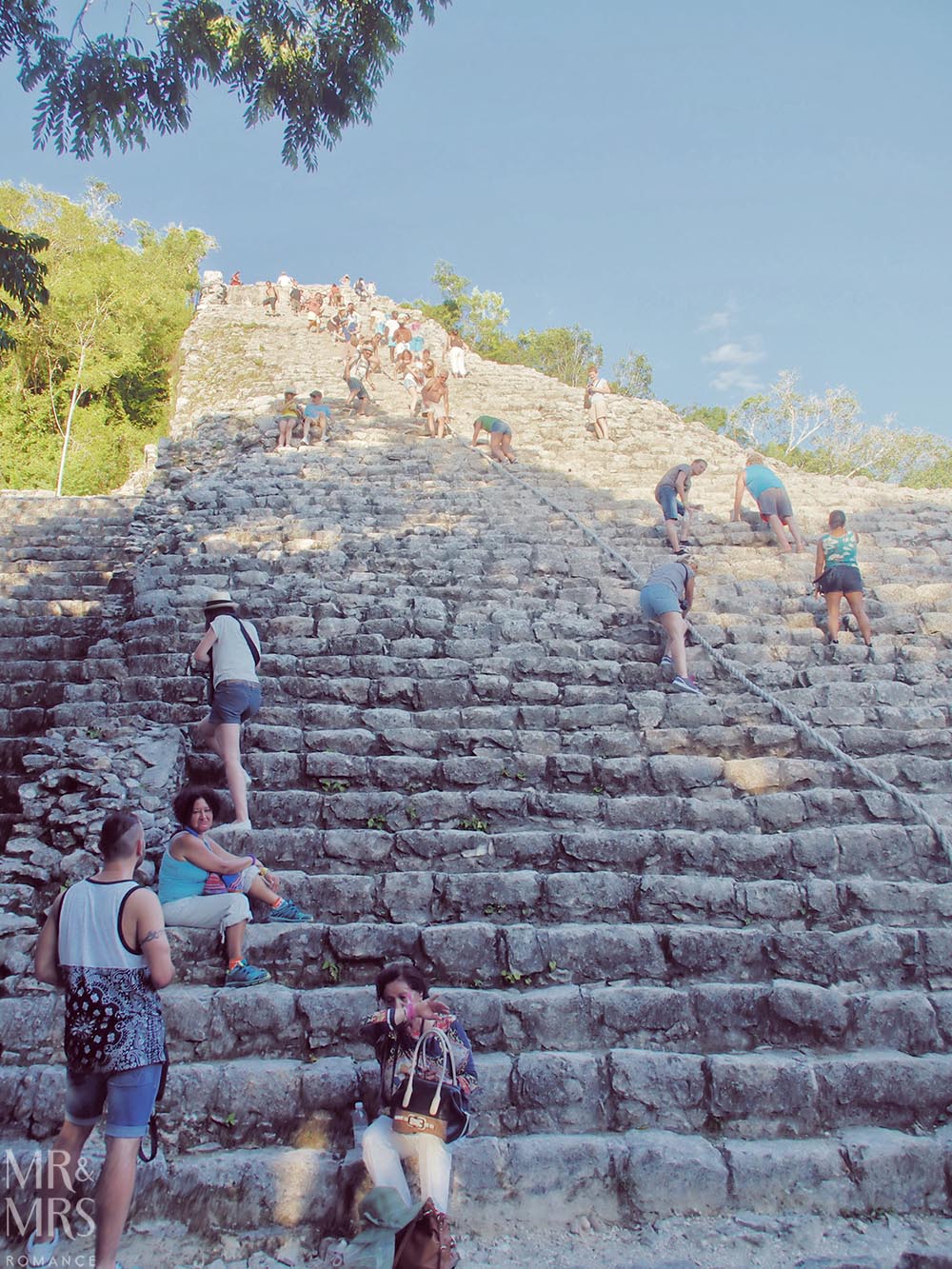 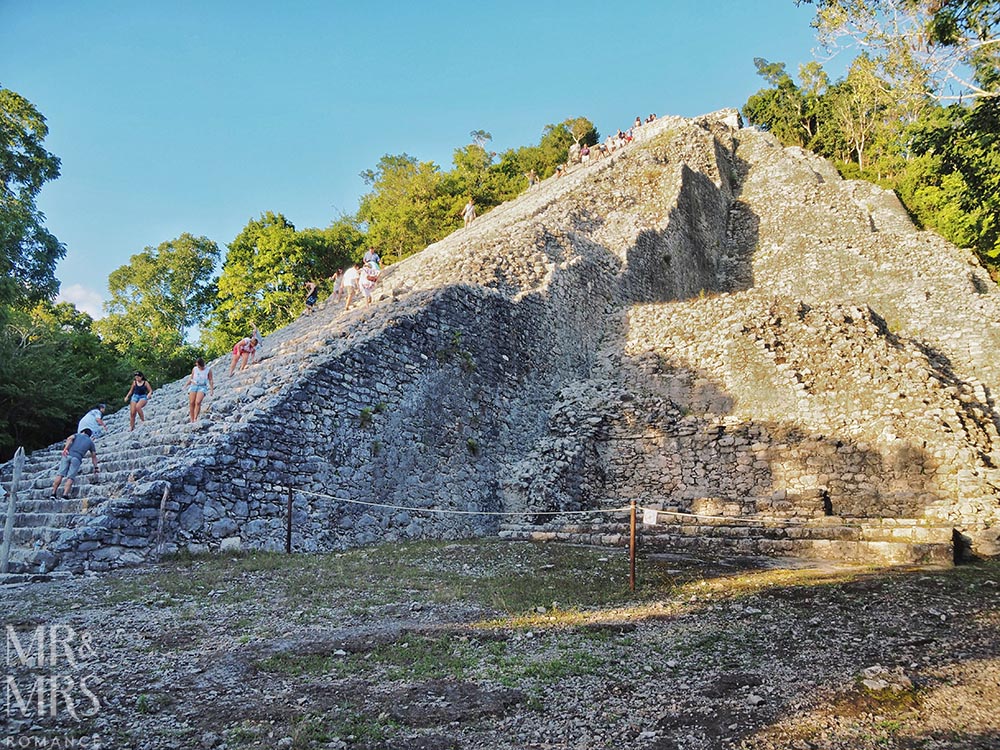 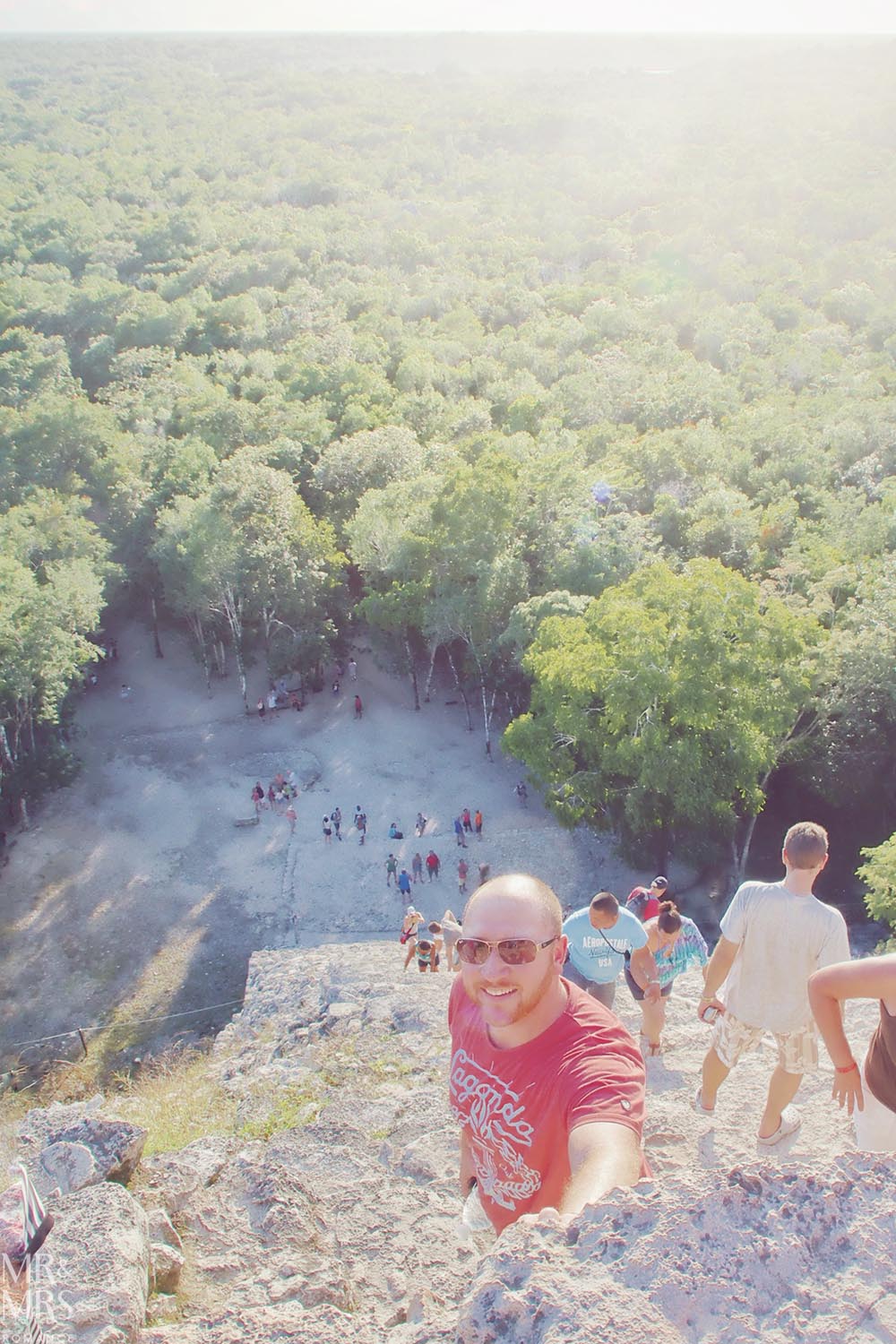 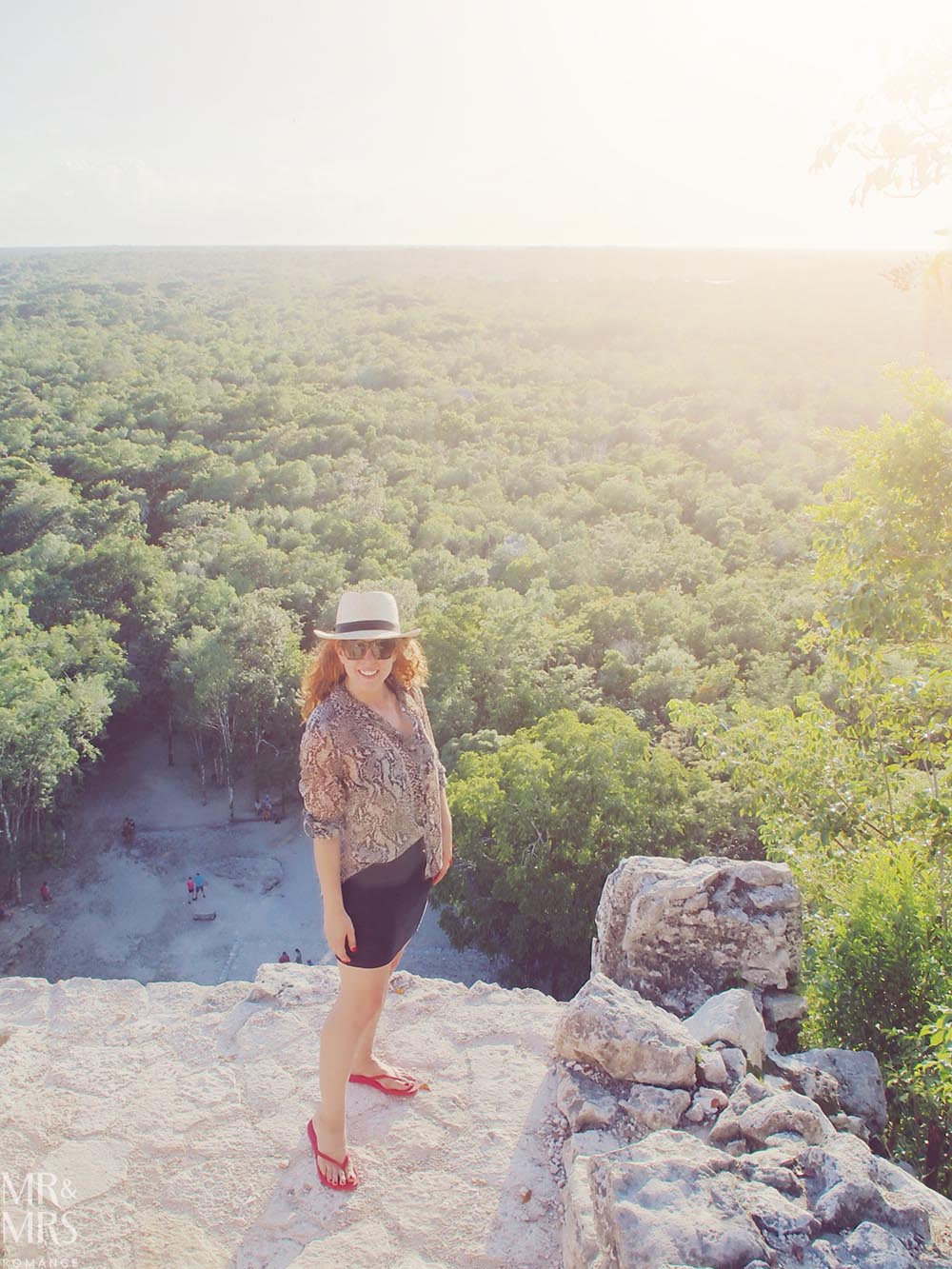 It’s a strenuous, terrifying effort, with each tall yet shallow step threatening to pitch you backwards to the bottom. But at the top, you’re rewarded with drone-like views across the jungles.

Lumps sprout here and there, and although they look like little mountains, we’re assured these are yet undiscovered monuments much like the one on which we now stand.

Directly west of Cobá, hidden by the horizon and the dense jungles, is Chichén Itzá – one of the Seven Wonders of the Modern World. And these two sites are joined by a direct path – an ancient sacbé.

You can still follow the sacbé – if you have the time and skill. It’s said to be a pilgrimage like no other.

As we clamber carefully down the side of this manmade mountain, we see the tree line come down to meet us. It’s like sinking below the green waves. And we get a sense of the loss of a civilisation – the departure of the way of kings. 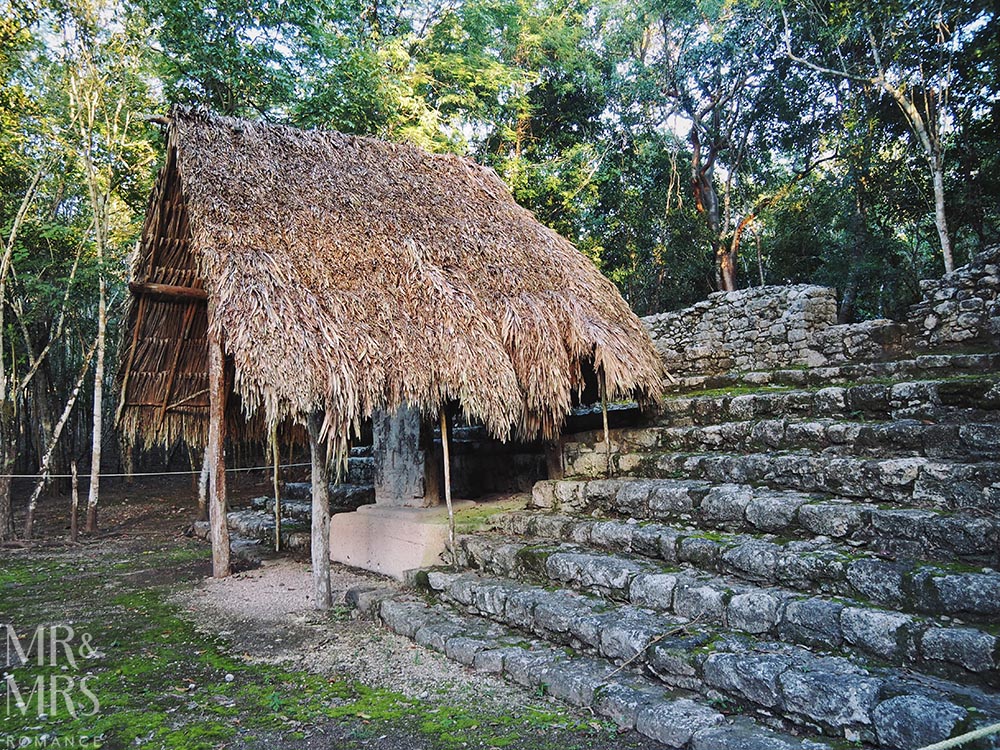 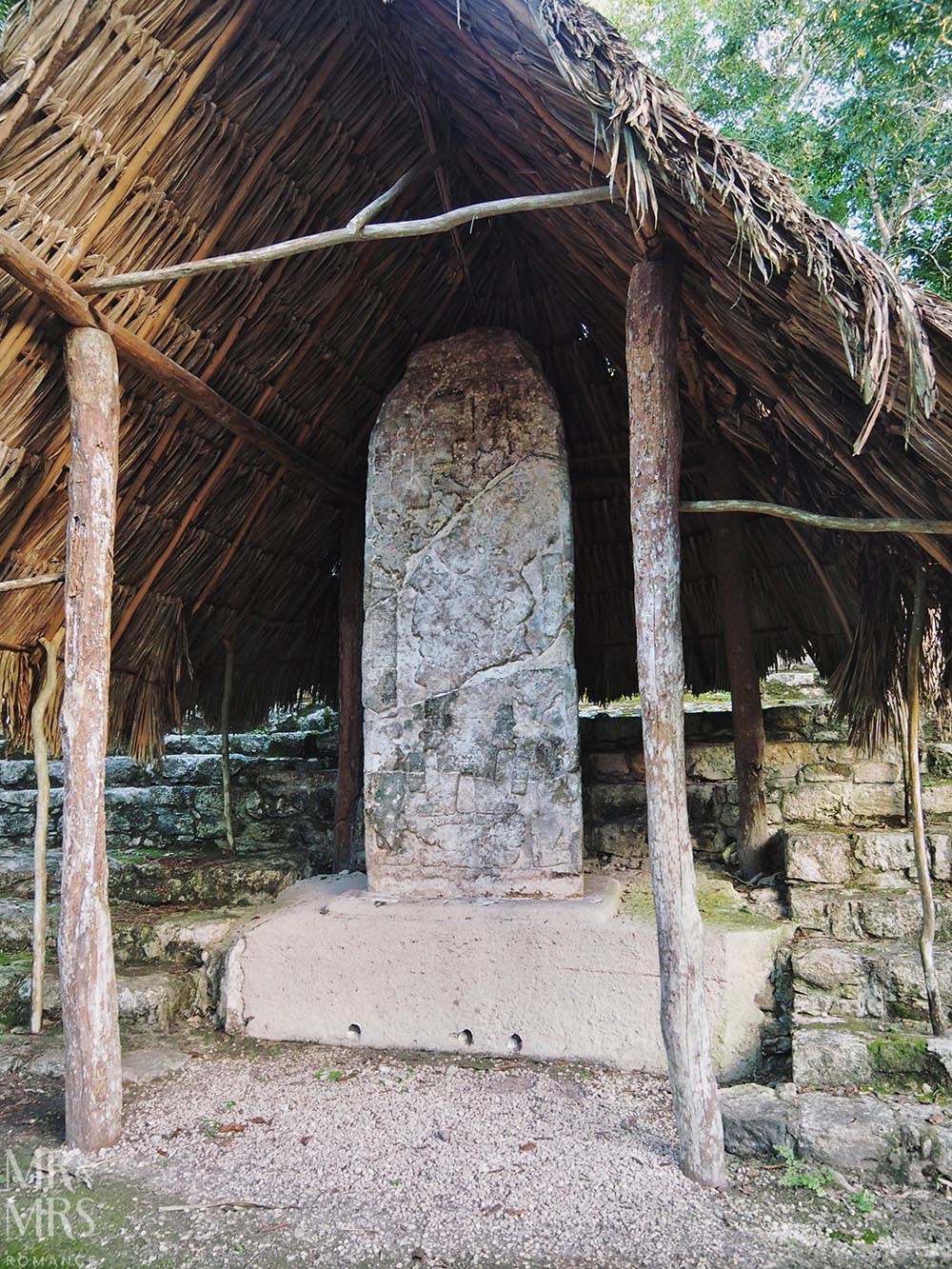 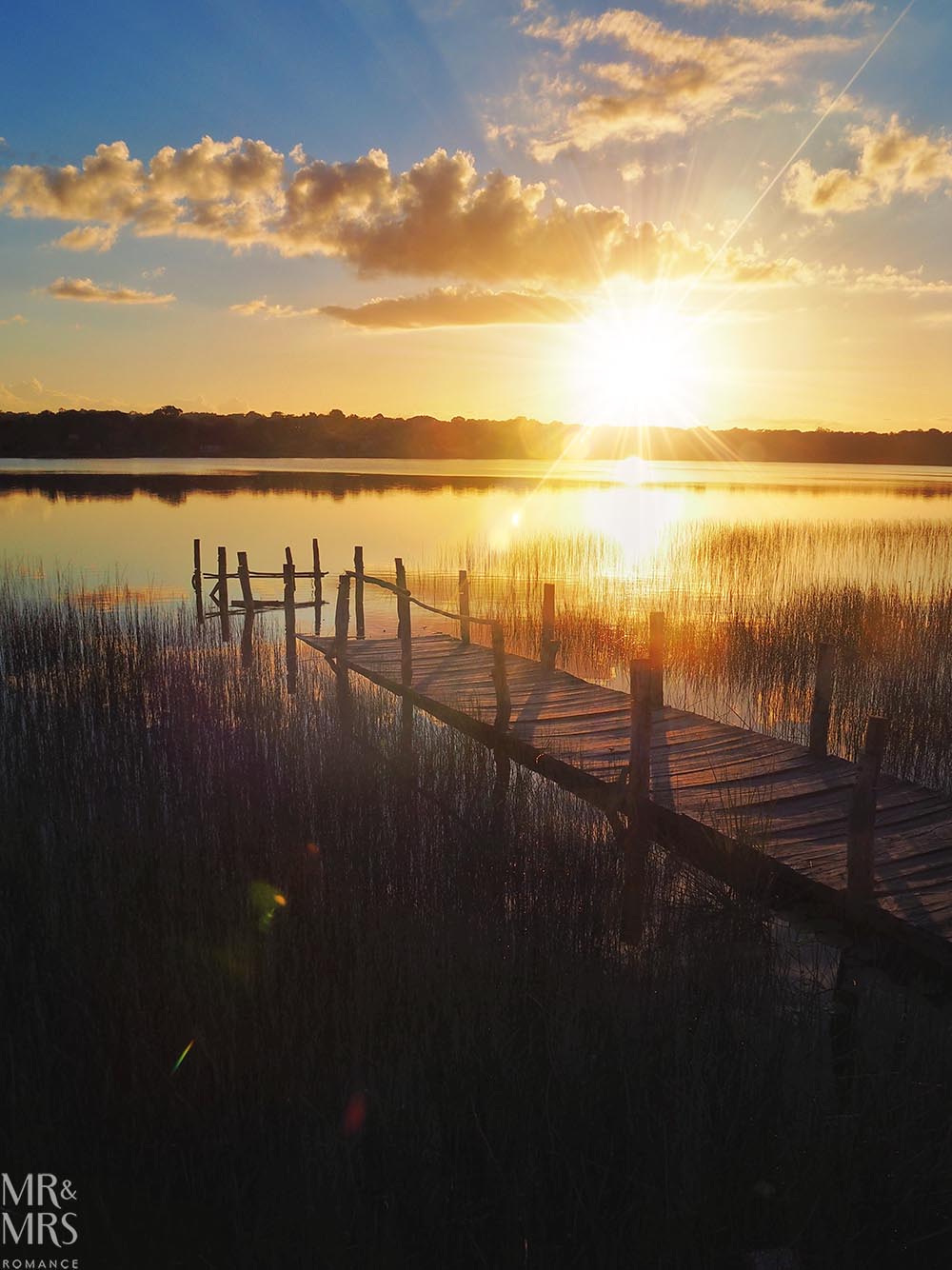 Cobá gets its name from the five lakes that the city was built around. Cobá means ‘Broken Water’ or ‘Chopped Water’.

One thing we’ve learnt as we’ve been travelling is just because you’ve been to a destination doesn’t mean you should stop learning about it.

And if anything, finding out new things about a place you’ve visited takes you back there and elevates your memories of your time travelling.

Your new knowledge combines with your memories to create a fuller picture – to make sense of things you experienced. 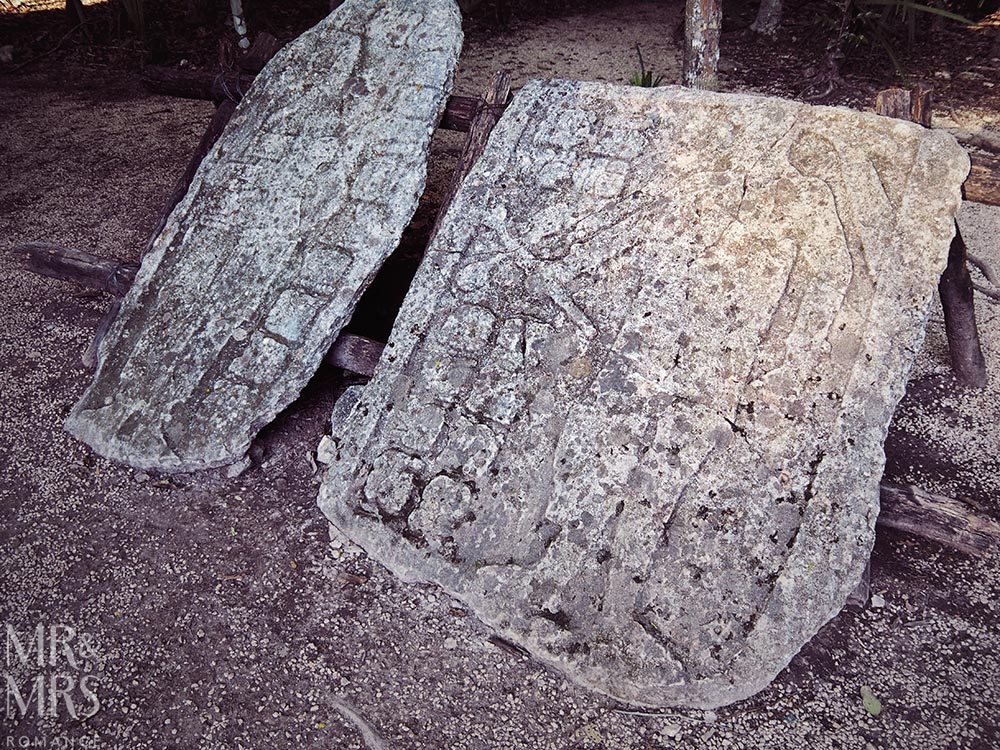 Here are a 10 things we’ve learnt about the Maya of Mexico since we’ve been back:

1. Coba was one of the biggest Mayan cities. In its prime it would have had a population of around 50,000 people and covered an area of 27 square miles. For context, Manhattan is only 22 mile².

2. The largest pyramid at Coba – Ixmoja – is not only the tallest in the Yucatan but the whole of Mexico and the third tallest in the world. Ixmoja is also known as Nohoch Mul, which means ‘great mound’ in Maya.

3. The ruins at Tulum are the only known existing Mayan buildings that are on the coast.

4. Over 4,000 archaeological sites have been discovered in the Yucatan Peninsula, but there are still potentially thousands more hidden in the heavy jungles of the region.

5. The Maya have been around for at least 5,000 years – roughly the same amount of time as the Ancient Egyptians.

6. Other ancient civilisations with similarly grand structures had the help of animals to carry and move stone. The Maya had no beasts of burden – only the strength of their own hands.

7. The east coast of the Yucatan Peninsula – the state of Quintana Roo – was one of the last strongholds of the Maya, who were only really completely subdued in the early 20th Century.

8. Quintana Roo was named after a popular law man Andres Quintana Roo, who was key to forming Mexico’s independence from Spain in the early 1800s.

9. Cancun, the biggest town in the Yucatan Peninsula, is the easiest gateway to the Yucatan and Quintana Roo.

It’s also a party hotspot and little remains of the land’s history or heritage. Cancun means ‘pit of vipers’ in the Mayan language. If you’re not into in the hedonism of Spring Break or the apparent ‘luxury’ of resort travel, this is not a place for you. I think the name is very fitting.

10. In the 19th Century, the Maya rose up against their Spanish oppressors and were, for a while, successful. It was the greatest and most recent victories of Indigenous Americans and Mesoamericans to have been recorded.

One of the Maya we met, who was in his late 90s, talked about his father and grandfather fighting in battles with the Spanish. The Caste War went from 1847-1853, so longevity must run strong in his family!

I remember the stories he told us of fooling the Spanish soldiers by hiding in the trees and calling to their gods, which scared the Spanish enough for the Maya to fight them to victory.

The Yucatan Peninsula and Quintana Roo were the last places of the Maya to capitulate to Mexican domination, which happened in the early 20th Century. 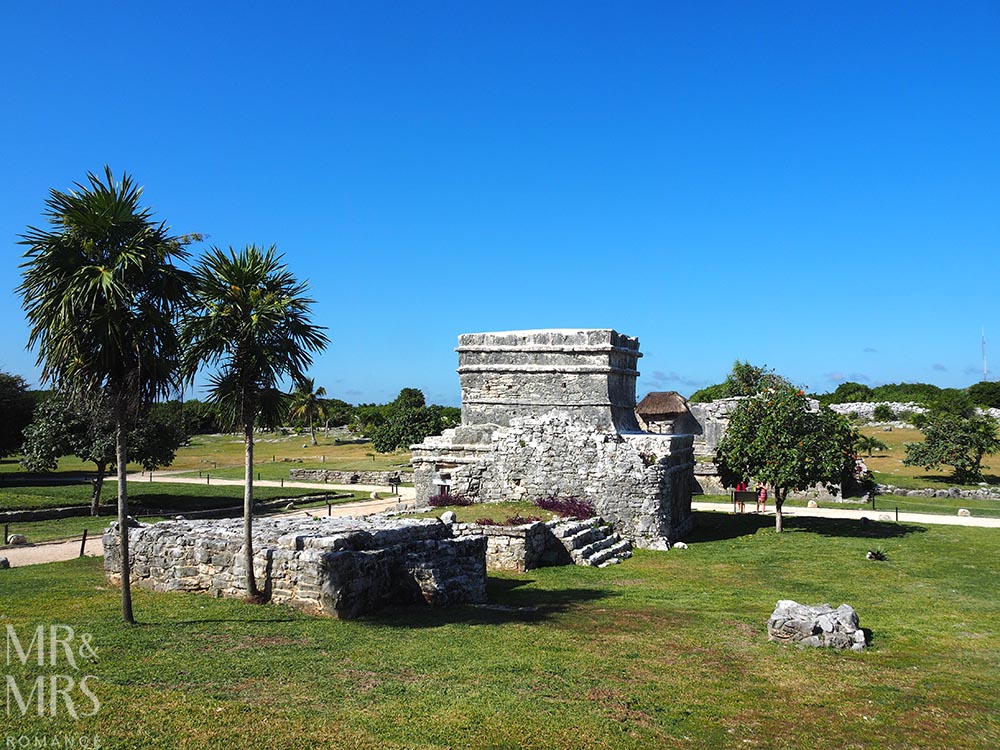 It’s quite funny talking to other men about skin care. You both edge into the conversation, testing the water wondering if the other guy’s…