Miami, Florida is only 90 miles from Cuba’s coast. Being the closest American city to Cuba, it makes sense that the people who made the move Stateside have developed a Little Havana of their own there. But how similar is Miami’s version of Cuba’s capital to the real thing? 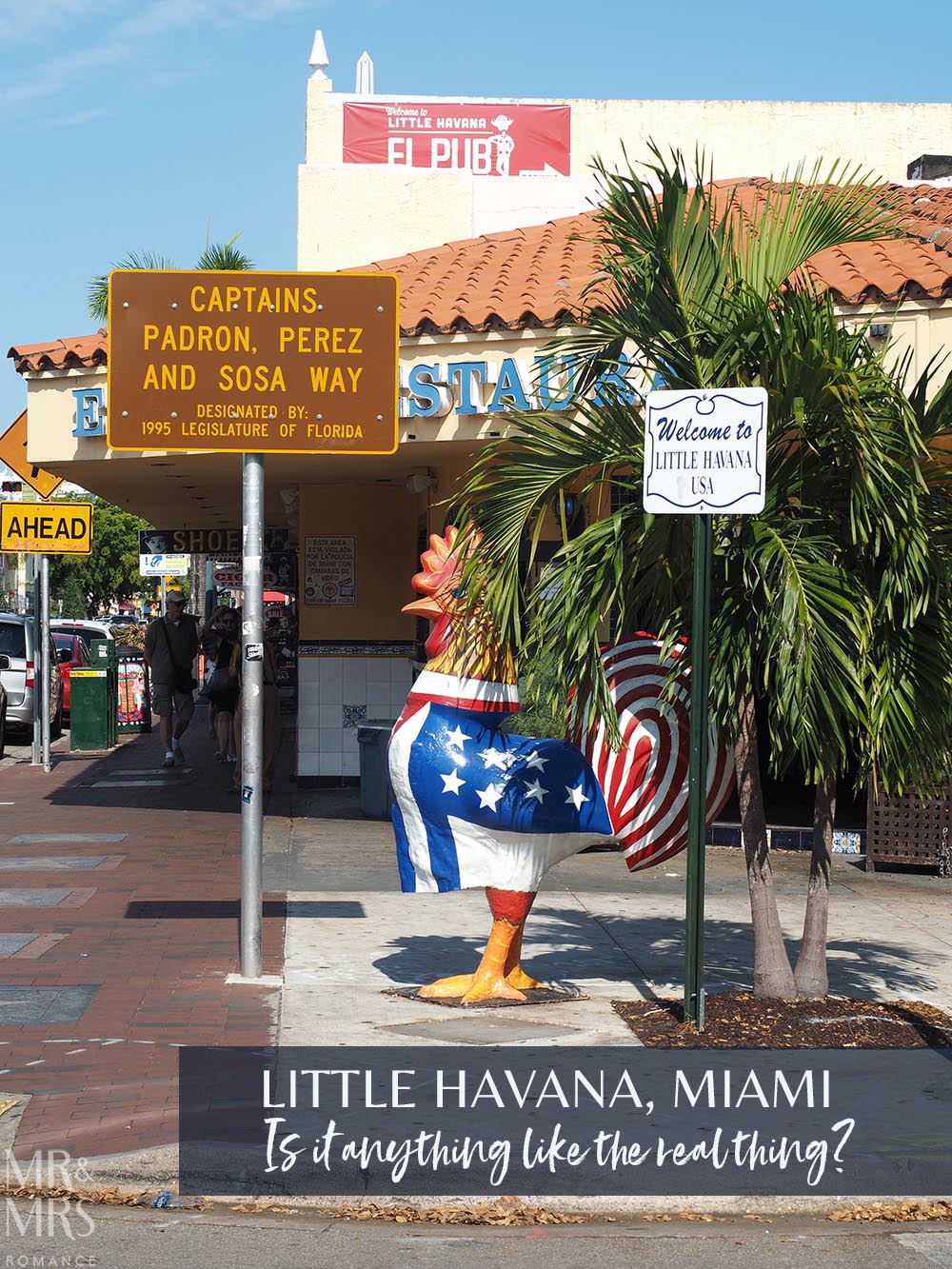 Thanks to its significant Cuban expat population, Miami, Florida has a kind of duel culture. The beachside party town glam of Florida’s Gold Coast has combined with the untouched salsa spirit of Cuba, and what’s come of it is truly unique.

Here’s our video of Little Havana to give you a taste of what it’s like there compared to the real thing:

As 8th Street heads to its eastern edge, the fascinating suburb of Little Havana really comes to life. It’s fascinating because it’s both like and unlike anything else you’ll find in America.

You get similar Hispanic hints in places like San Diego’s Old Town, but there’s something distinctly Cuban about this part of Miami. And that’s what makes it different.

But the thing that made it even more interesting for us – coming straight from Cuba to Miami – was to see how the Cubans here represent their homeland capital in America. 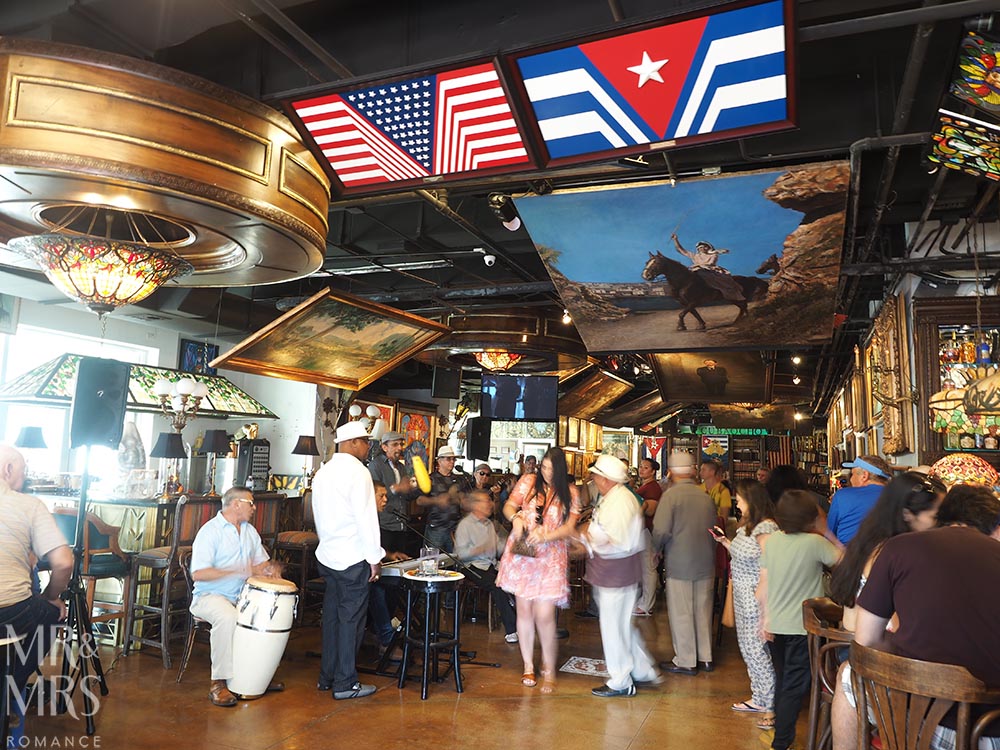 But things feel a little fake. A little forced. 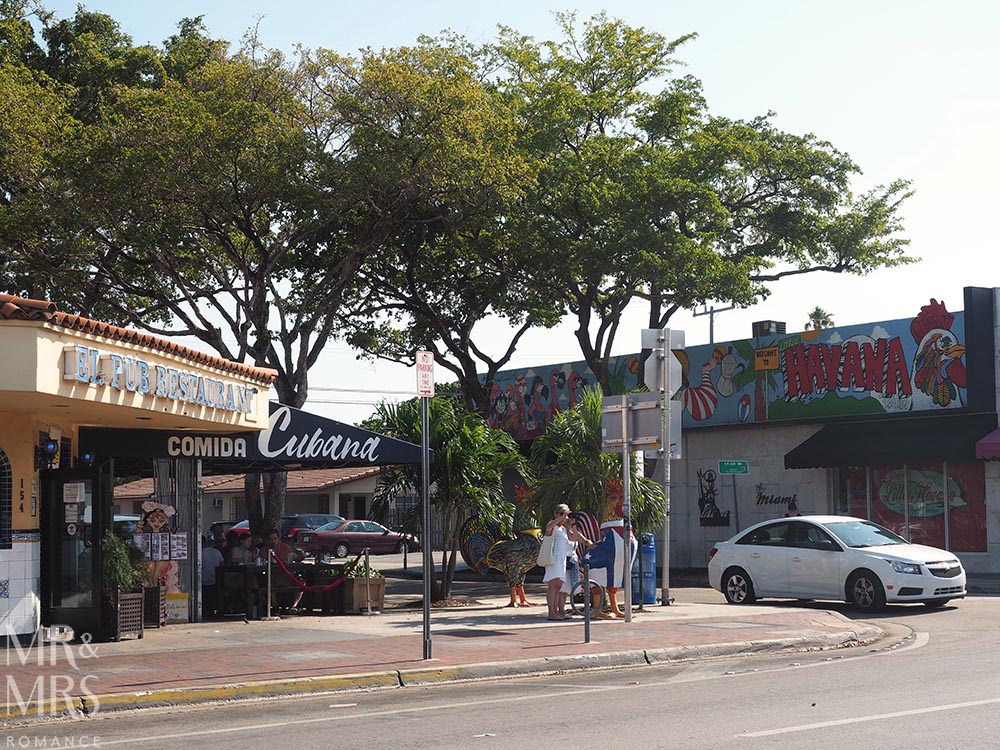 It’s not until you spot the little details that you realise the authenticity of Little Havana.

In Maximo Gomez Park – also known as Domino Park – we were drawn to the clack-clack of the dominos slamming down. Tables and tables of Cuban gents all playing the age-old game. But closer inspection shows these dominos are distinctly Cuban. Instead of one to six dots, these pieces go up to nine. And it’s a much more confusing game.

You’ll also find people selling long thin cones of white paper filled with peanuts. If we hadn’t been to Cuba, we’d probably have found this quite strange, but these little snacks are a common sight on the streets of Havana. 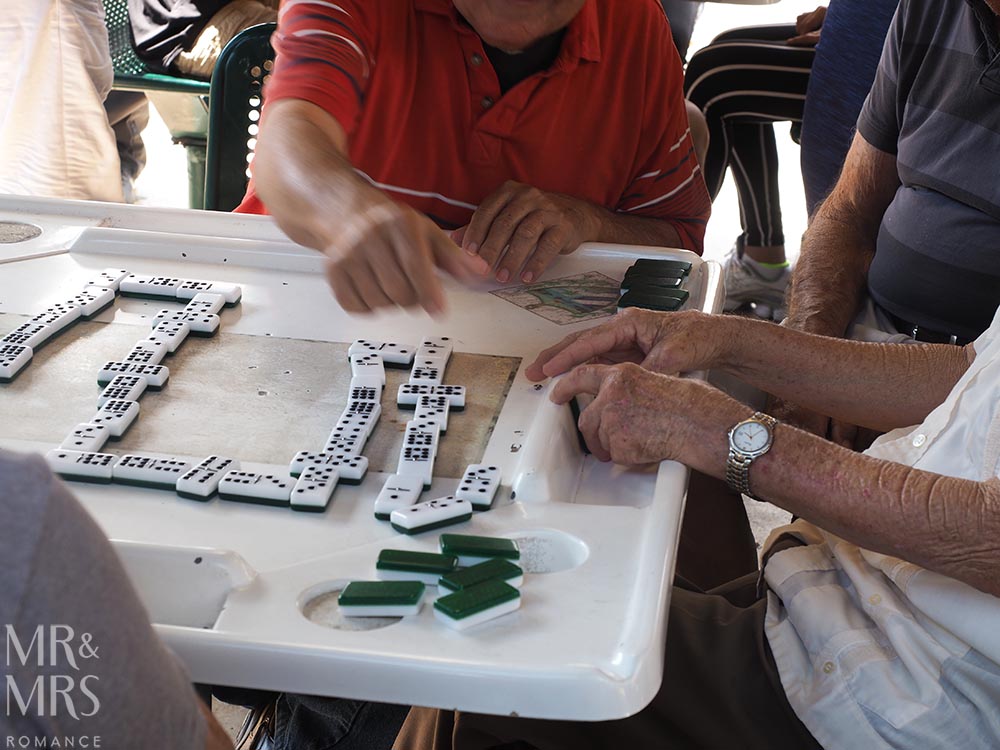 Like most places in Miami, there are plenty of watering holes and food venues in Little Havana. From American fast food joints to little family-run Cuban paladares, 8th Street has plenty to choose from.

But the most compelling and also the most interesting on Calle Ocho is the Cubaocho Museum and Performing Arts Center. With live bands playing frequently and impromptu salsa dance-offs happening too, it’s the perfect spot for a mojito or a cubata. Sit at the bar, watch the people and soak up the notion of Cuba.

Further inside Cubaocho is a wealth of old Cuban artefacts, furniture and artwork worth going to see. 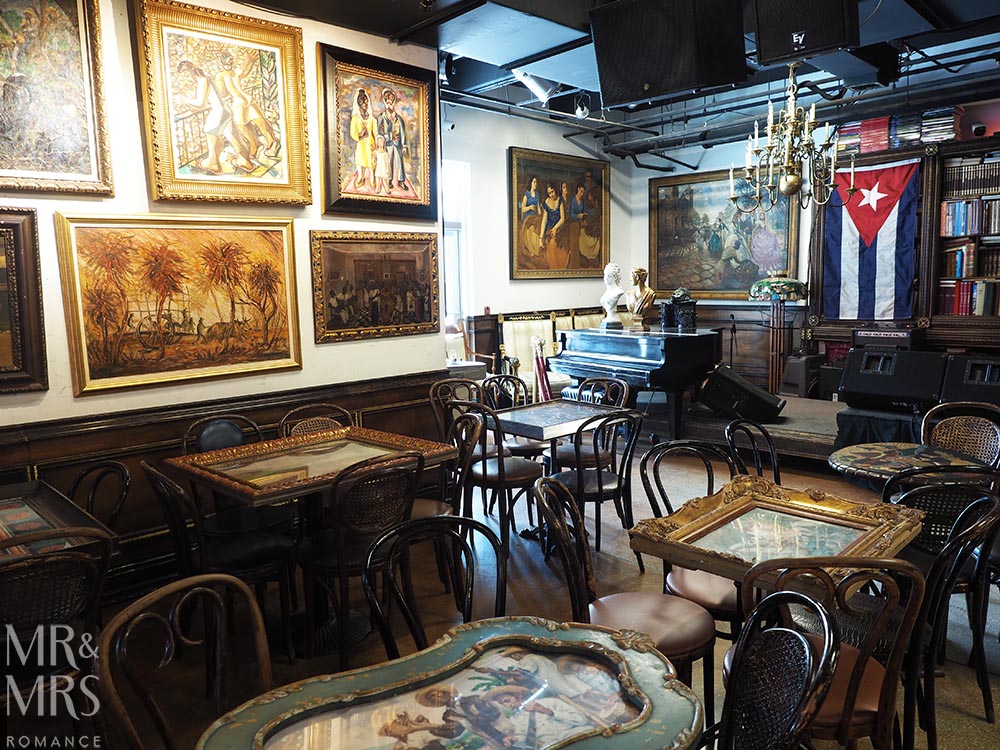 Also worth looking at are the cigar shops on Calle Ocho. Some of them have people hand-rolling cigars in the traditional way. Of course, these won’t be Cuban cigars, but the rollers look like they’re doing a pretty professional job. Though they’re much slower than the pros we saw in the Partagas factory we visited in Havana.

Funnily enough, you’d never see people rolling cigars on the street in Havana, Cuba. They’d be arrested immediately. The only legal cigars produced in Cuba come from government-run ‘factories’. Everything else is essentially a bootleg product. 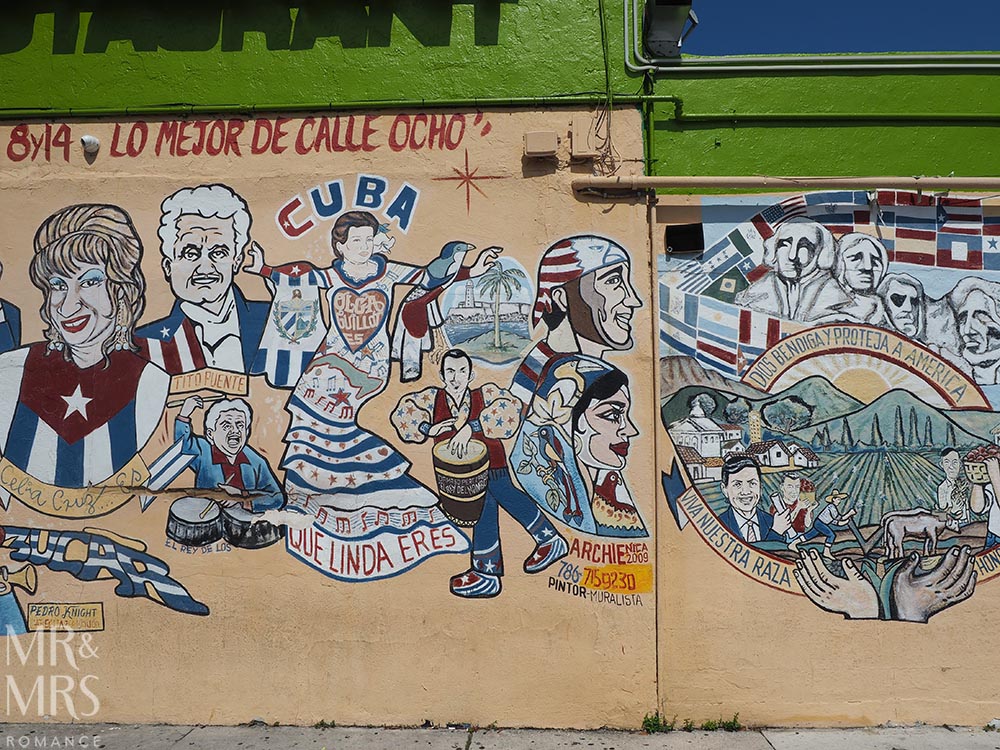 How much does Little Havana hold up against the real thing?

Obviously Little Havana is missing the old grandeur of Havana proper. The history, variety and elegant neglect of the architecture in Havana is like nowhere else on earth. Its narrow looming streets full of life and minimal pavement create a unique feeling as you walk through Cuba’s capital.

However, Little Havana is much cleaner than the real thing, which is desirable. It’s also safer in respect of avoiding traffic. The freedom and relative wealth the people in Little Havana have makes us both sad and hopeful for the Cubans still in their homeland.

And with the coming tide of tourism to Cuba, perhaps we’ll be seeing a Taco Bell and a MacDonald’s on Havana’s streets – just like on Calle Ocho. 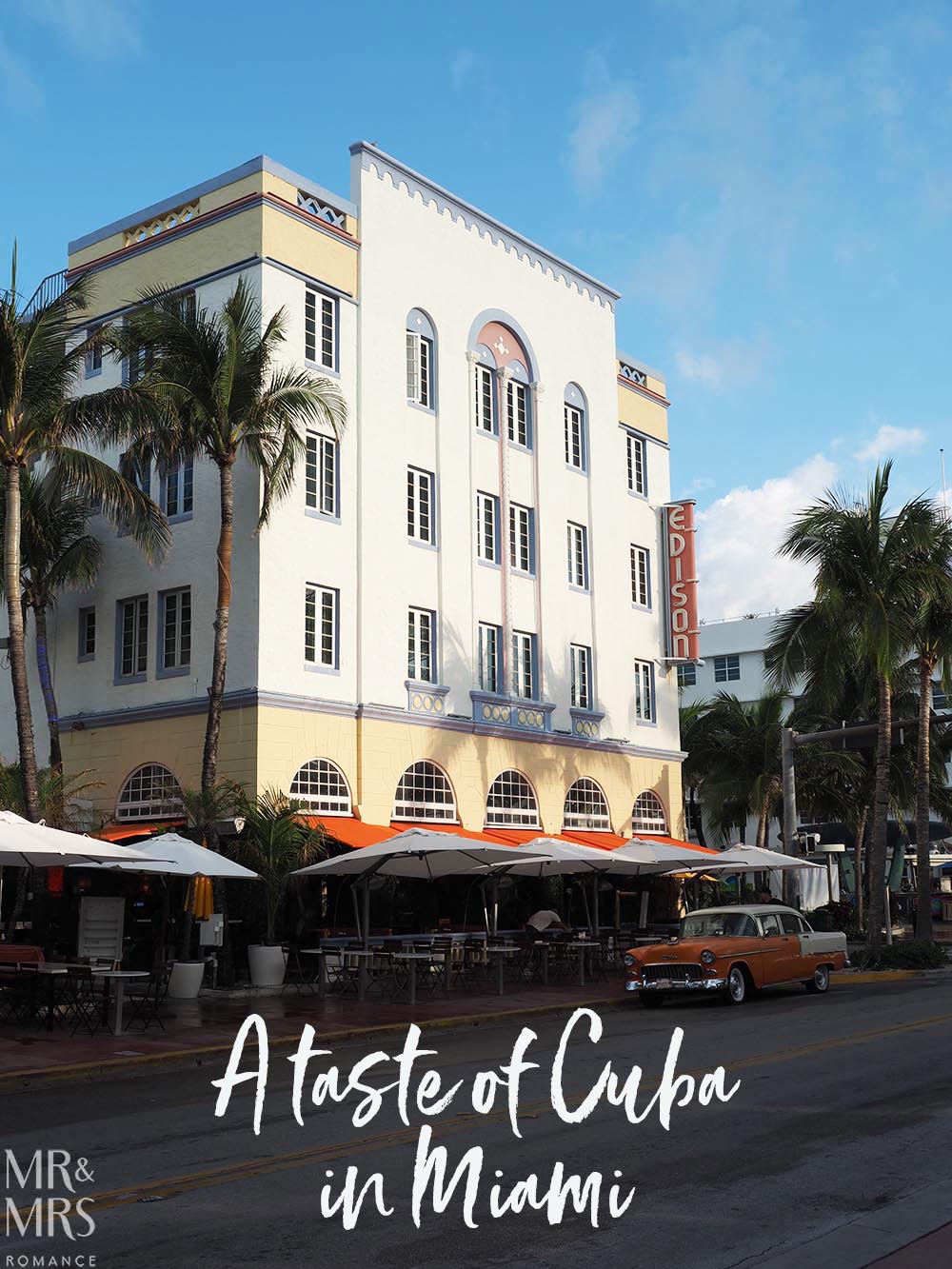 Is it worth visiting Little Havana?

Little Havana is as unique a place as real Havana. But then all of Miami is just as unique. No two places are the same.

Little Havana is great if you’re looking for a tiny reminder of your time in Cuba. It’s fun, colourful and almost as full of life as the real thing. Nothing quite beats actually visiting that beautiful island nation, and we’d recommend spending time in Cuba to anyone who wants to see something extraordinary.

If you haven’t been to Cuba yet, some of the little details we enjoyed might pass you by. But seeing the exposed heart of a major element of Miami life explains something of what this city is about. 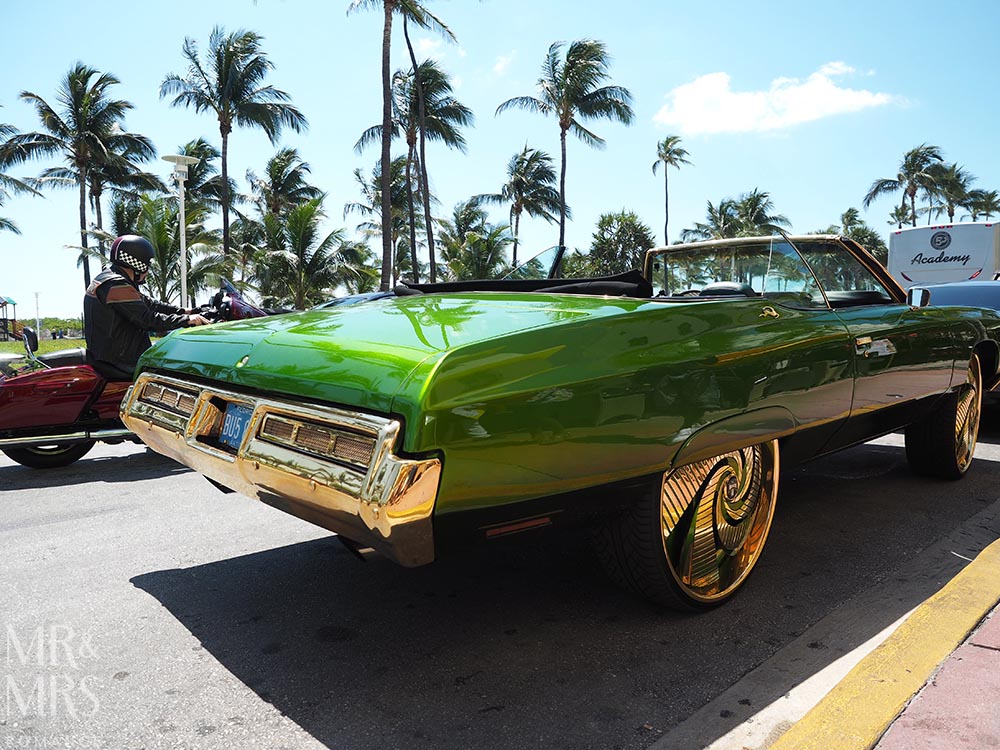 Many of the older Cuban Americans came to Miami fleeing persecution of the Castro revolution in the ‘50s and – seen by the Cuban state as traitors – they haven’t been back home since.

It made us wonder if we were seeing the Havana the locals remembered from their heydays before everything in Cuba changed.

Have you been to Little Havana in Miami? What did you think? Have you ever been to a smaller version of a city you’ve fallen in love with? Tell us all about it in the comments below! 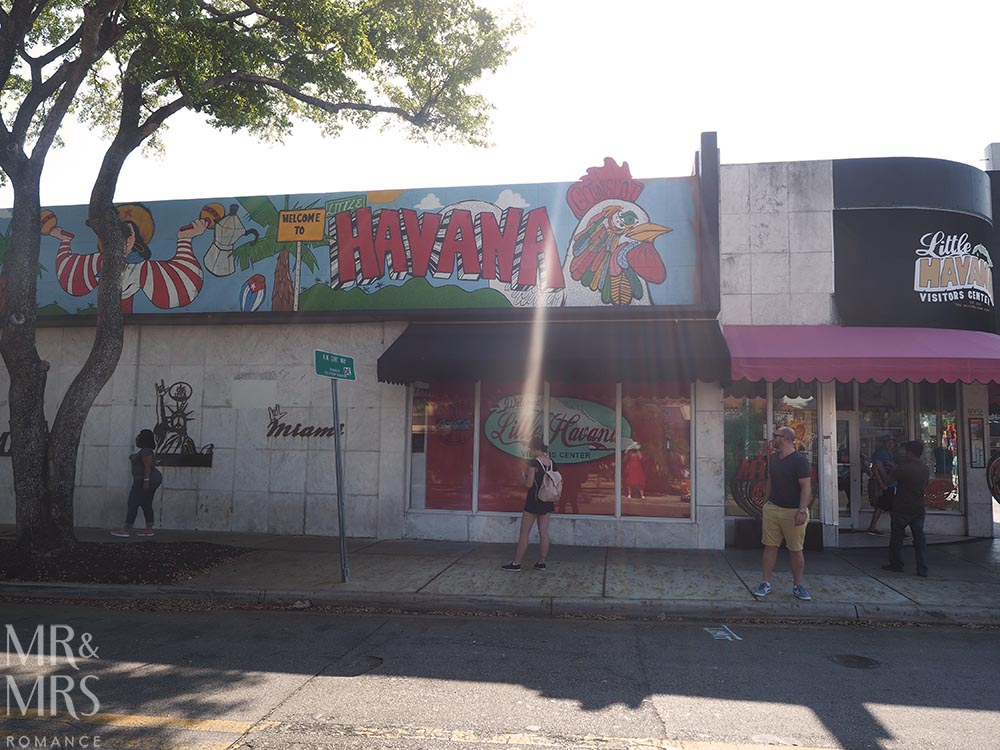 All the way to LA

And we’re off again! This really has been a crazy month for us in terms of travel – not that we’re complaining. But with…