Knowing what to do in travel hub Kuala Lumpur has become more and more important for travellers. And with so much to offer, the Malaysian capital is the best way to start or end your next trip. Here’s our first-timer’s guide to Kuala Lumpur, the Garden City of Lights. 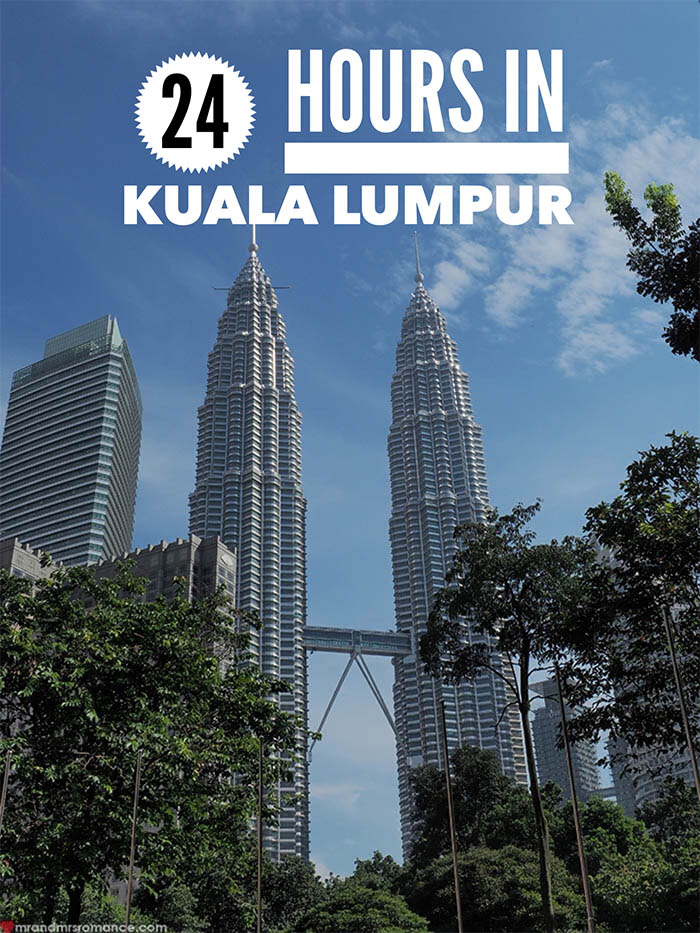 Mrs Romance and I have flown in and out of Kuala Lumpur Airport – or KLIA – so many times but have never had the chance to get outside the airport and explore the city before. Now that we know what’s out there, we’ll be making our travel itineraries a couple of days longer to get out and about in the Garden City of Lights.

Here’s more from our latest trip to Malaysia and Thailand.

With so many cultures and influences at work in this cosmopolitan Asian city, visitors are spoilt for choice with what to do and see – but most importantly what to eat here in KL.

To help with the paradox of too much choice – especially if it’s your first time in KL – we’ve put together an essential guide to Kuala Lumpur and what you can do in 24 hours. 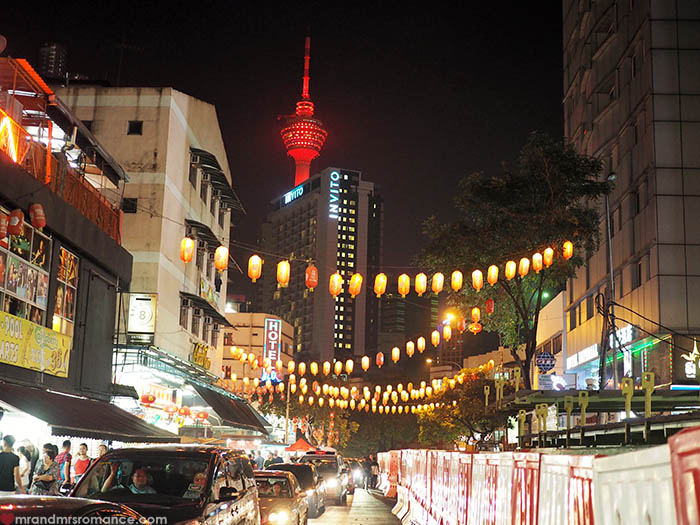 Where to stay in Kuala Lumpur

This impressive hotel has all the comforts from home you’ll ever want. The rooms are large, the views out over the city are impressive (we could even see the Petronas Towers from our windows) and the rooftop pool is very tempting. 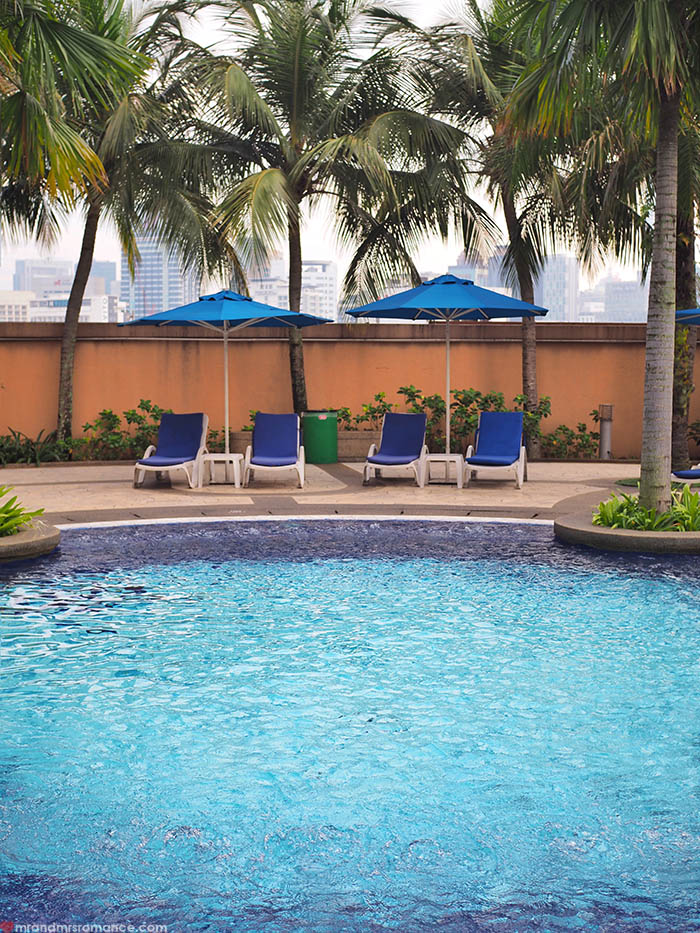 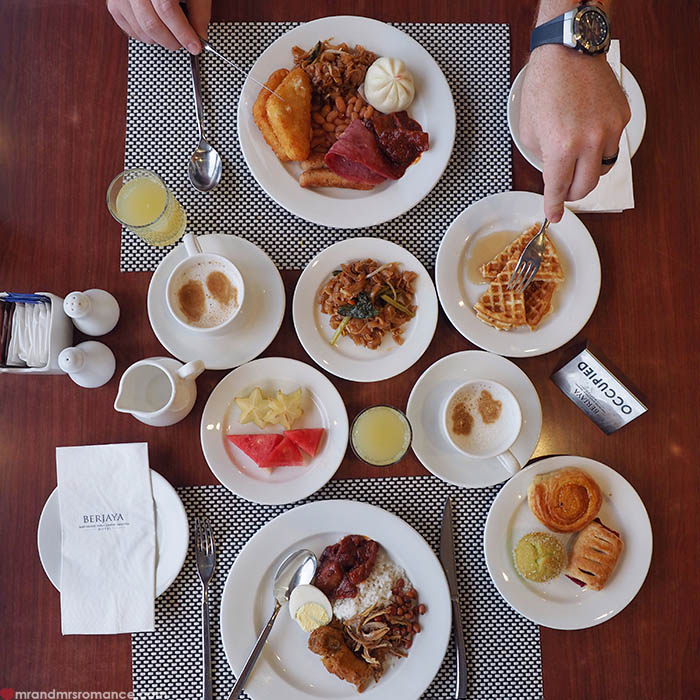 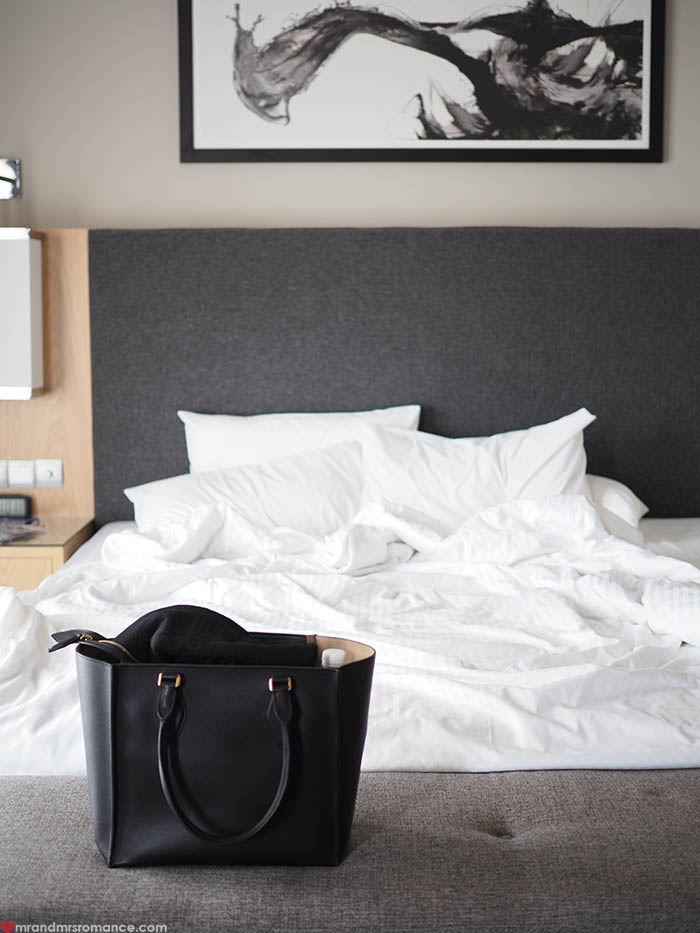 The hotel is also perfectly located. It’s right in the heart of the city. You’re also just off the main highway in the south of the city, so getting to and from the airport is really easy.

As an added bonus, the Berjaya is on top of one of the city’s many shopping centres, so you have convenience literally at your doorstep. Not only that but the Times Square mall is also a theme park replete with roller coasters. Bit different, isn’t it?

How to get around KL

Taxis (amusingly ‘teksi’ in Malay) can be a bit hit and miss. The cabs are often old and disheveled and the drivers have a reputation for dodginess – though the taxis we caught were fine. 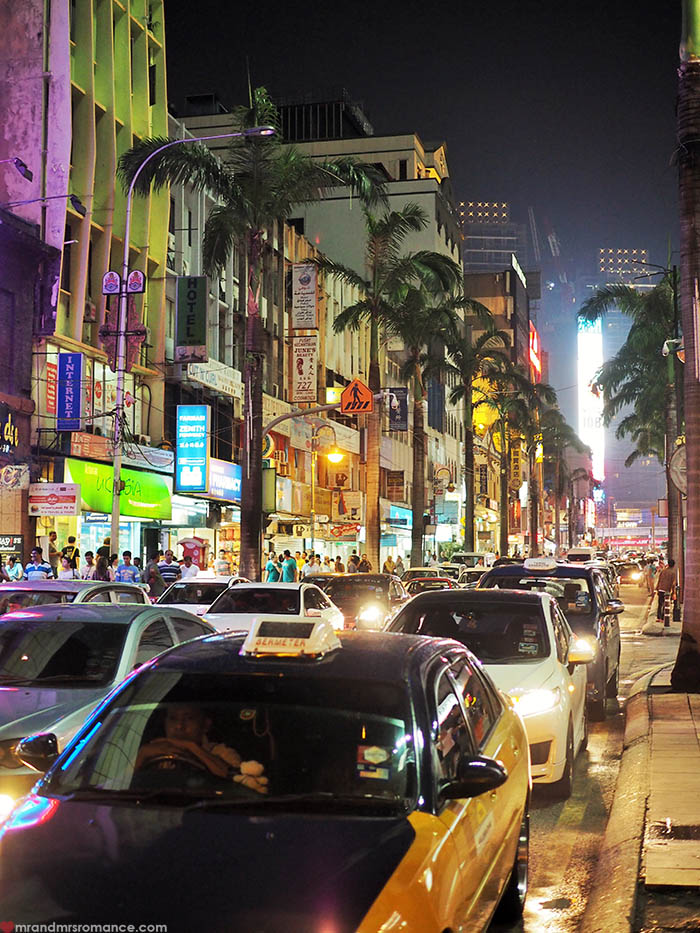 Uber is in KL though, and this is probably your best bet for getting to and from the airport. As you exit the airport, run through the taxi rank gauntlet, book your Uber and call the driver. Organise a spot to meet away from the taxis – they don’t get on with Uber drivers.

In the city, you’re probably better off with taxis – just make sure they have their metres on when you’re on your way.

Walking in KL is one of the fun parts of the city. It’s a chance to take your life in your own hands, though wherever possible we like to follow a local. These guys are amazing at crossing the busy KL roads! 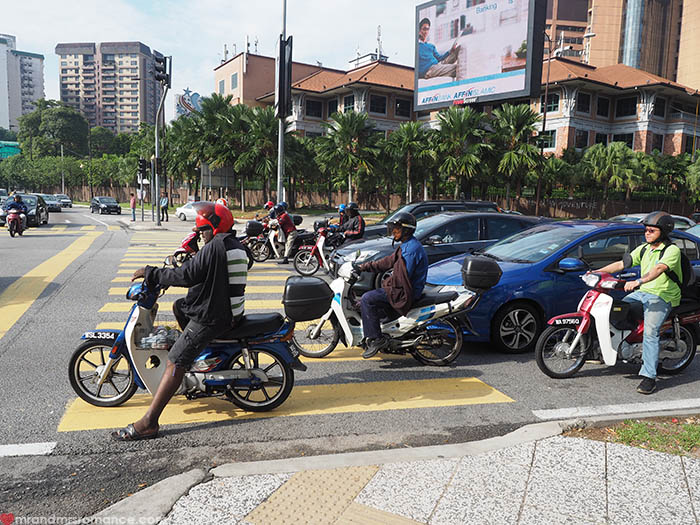 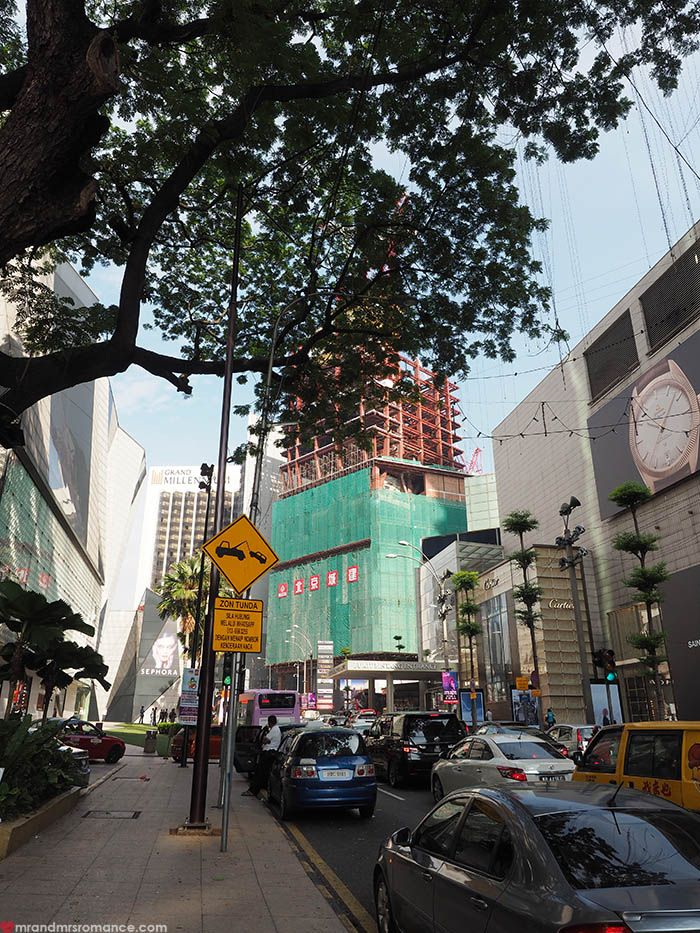 Through a large section of the city – especially near the Petronas Towers and the monorail stops – are skywalks. They take you above the racing traffic and make getting across town on foot very easy. 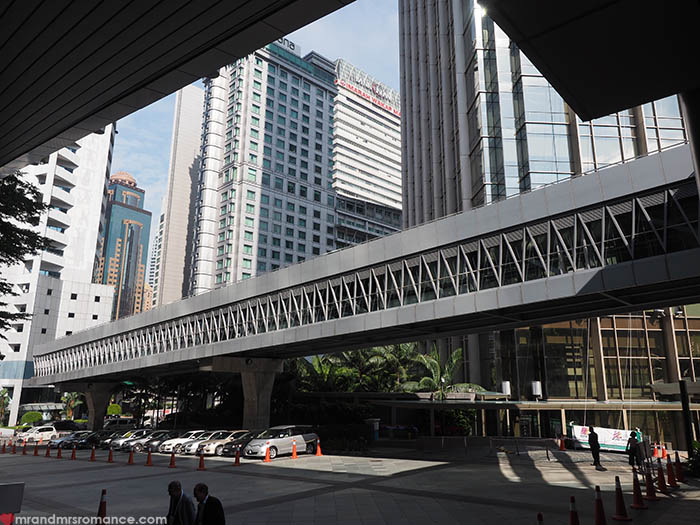 There are lots of bars around KL and most eateries will serve beer. However, remember that a large percentage of the population here is Muslim, so use discretion when in restaurants.

Most if not all Chinese Malay eateries will sell alcohol.

We didn’t make it here, but our Malaysian friend tells us this is a very cool watering hole to visit.

Relax with a cocktail or a beer by the Traders Hotel’s pool. You’ll have an amazing view out over the KL Park where the Petronas Towers are. 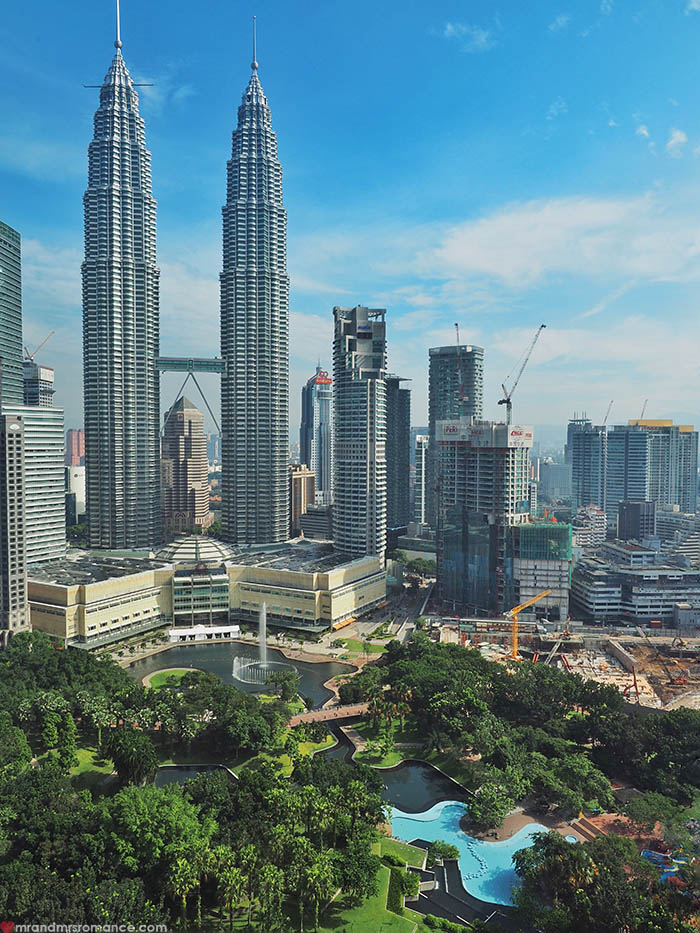 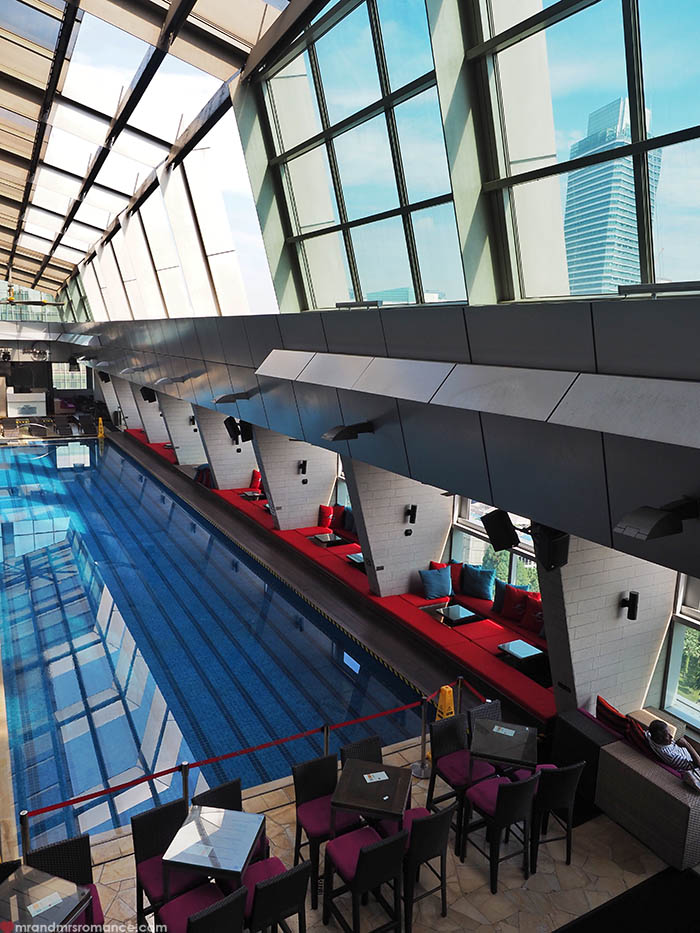 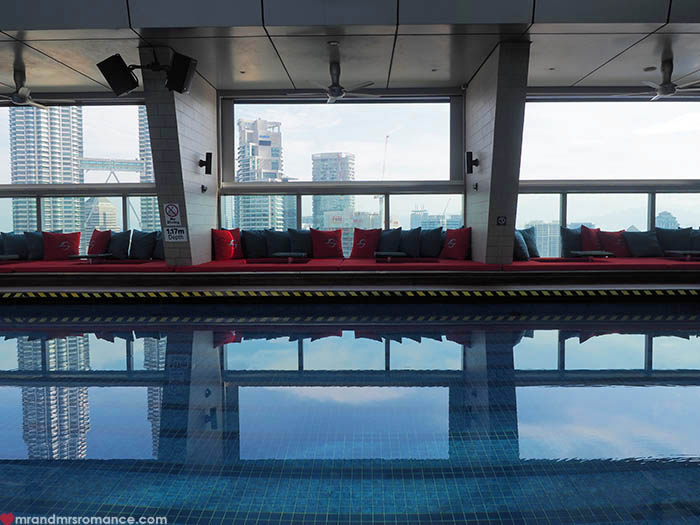 This road is full of bars and restaurants, and really kicks off after dark. There’s a strong expat community here, who share the space with local party-goers. If you’re looking for a night out, this is where you need to come.

Yes, your hotel has a bar and it’s pretty popular too. Find a table near a window for a lofty view of the city.

One thing that’s easy to find in KL is good food. You can’t really go wrong.

Try the food courts in the shopping centres – usually on the lower levels. There’s plenty of range and it’s all safe, so no dodgy tummies!

This street has an amazing night food market you can’t miss. Even if it means having two dinners, go here. It’s a wonderful assault on the senses. Grab a satay and a beer and watch the people squeeze by. 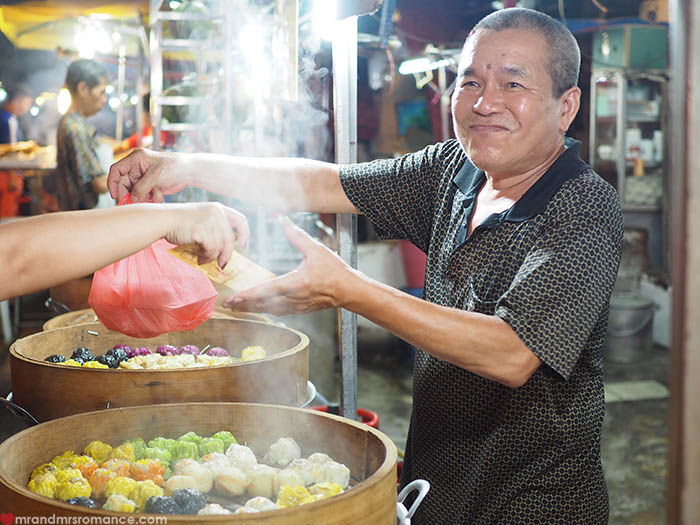 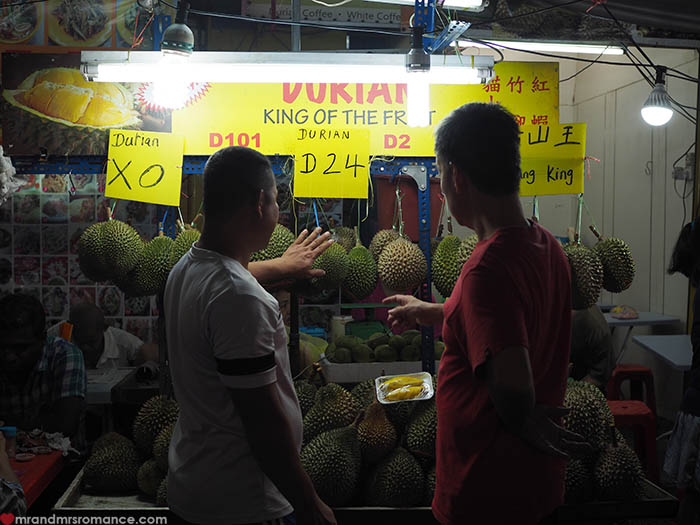 Another night market street that’s a bit more organised and easier to get around.

The concierge at the Berjaya showed us to a place just across the street called Kafetaria Ikhwan. It’s no-frills and full of locals, but the food’s top draw and so cheap. 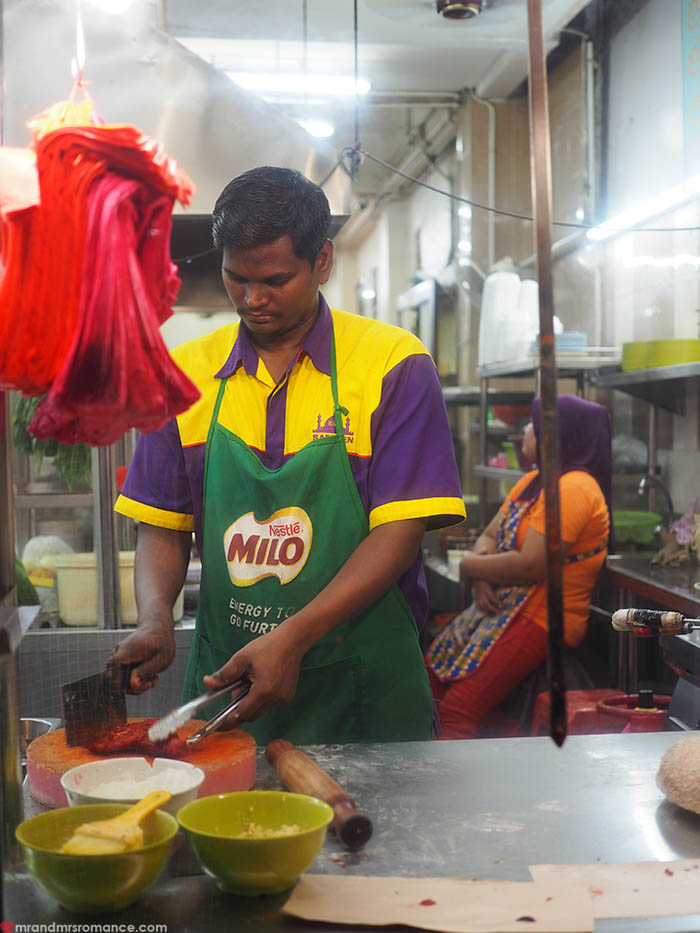 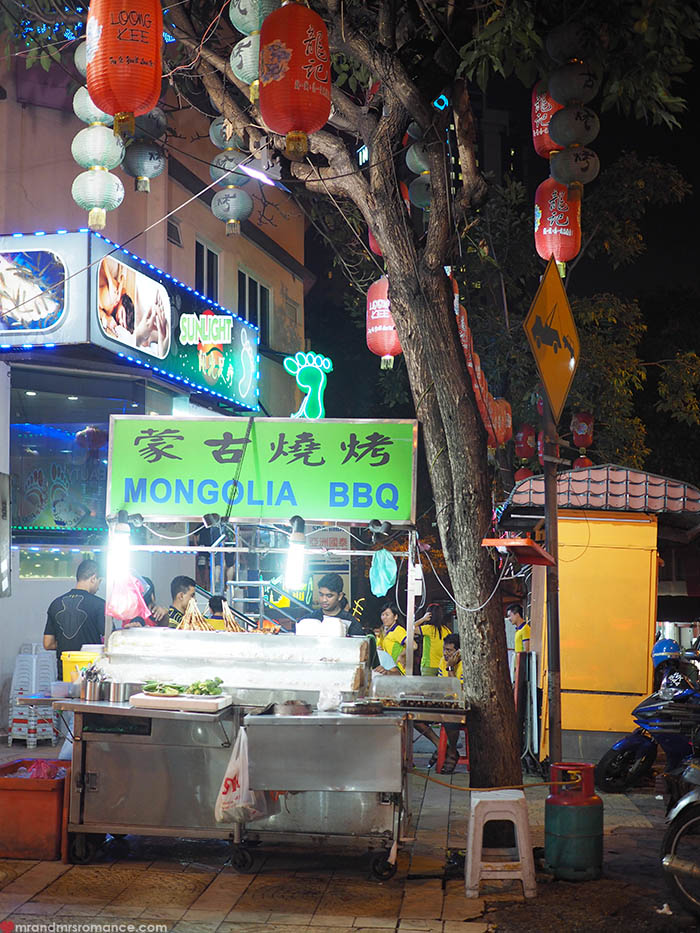 What to eat – in a word: everything!

Char kway teow – Mrs Romance’s absolute favourite, this fried thick, flat noodle dish usually comes with pork or chicken and veggies. I totally get why Mrs R loves it so much!

Char siew – this barbecue pork dish is our favourite. Locals will tell you every place that does it has its own style and no two char siew venues are the same. The pinky-red smoke ring in the pork and the crispiness make this an awesome bite to eat.

Roti canai – a classic Indian influenced dish, this usually comes in a metal tray a bit like what you might’ve had at school. Or if you’ve been in prison! But crockery aside, tearing up that crispy roti flat bread and scooping the daal and curry sauces is a real eating pleasure. 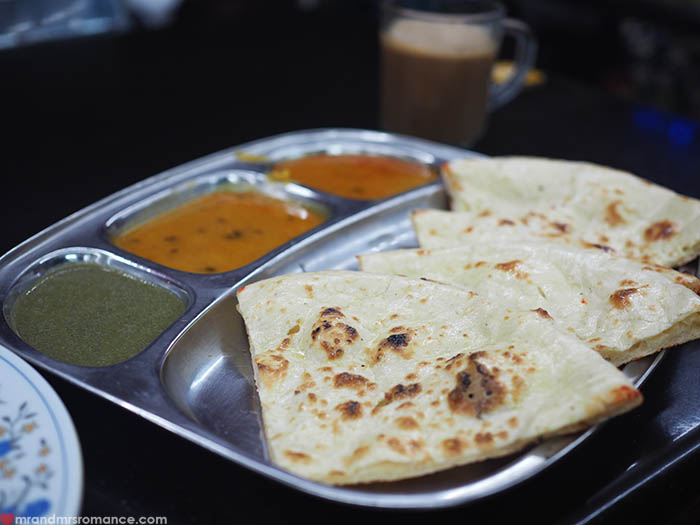 Nasi goreng – literally meaning ‘fried rice’, this is a Malay staple. You’ll find it everywhere in KL. It’s a good one to fill up on before you head to the airport.

Laksa is a tricky one in Malaysia. In places like Australia, you order prawn, chicken, beef or vegetarian, but in KL you won’t have those choices. However, there seems to be an enormous range of laksa available.

The regular one will be asam laksa, which isn’t made with coconut milk and is much more pungent!

Satay – you can find this in Thailand, Indonesia, Laos… all over this part of SE Asia, but it’s particularly common in Malaysia. Make sure you get lots of peanut sauce with yours! 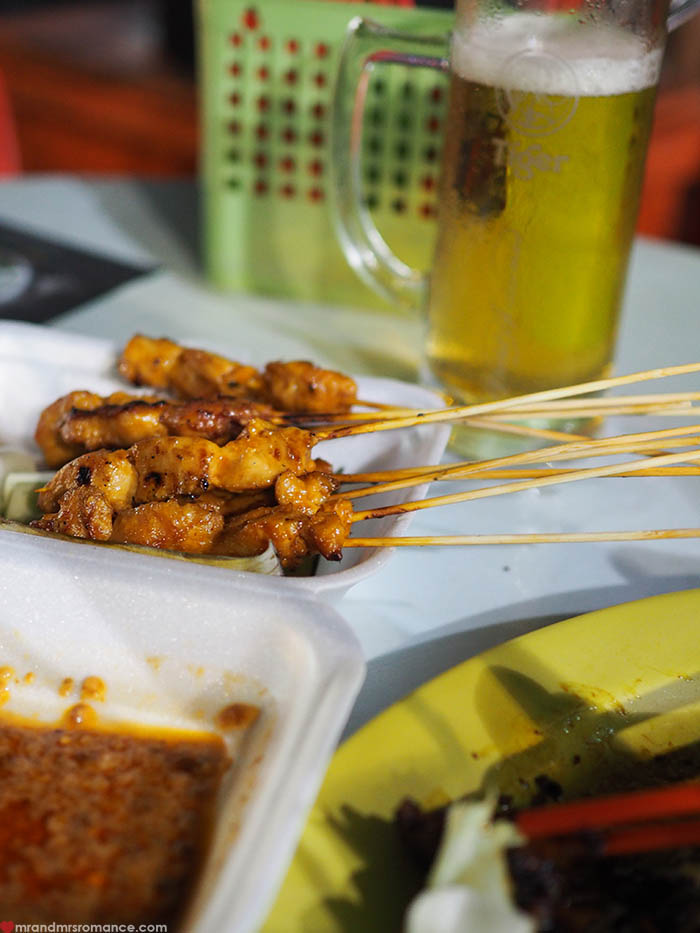 Curry mee – special to Singapore and Malaysia, this spicy noodle soup is more like the laksa you find in Australia, just with curry. It’s delicious!

Nasi lemak – locals like to eat this for breakfast but it’s an all-day dish as far as I’m concerned. Recognised as Malaysia’s national dish, this aromatic rice, sambal and crispy anchovy dish is simple but delicious.

Frog soup – my mate reckons it’s excellent… I’m not so sure. It’s actually frog congee, so if you’re not into either eating frog or congee, don’t do it! 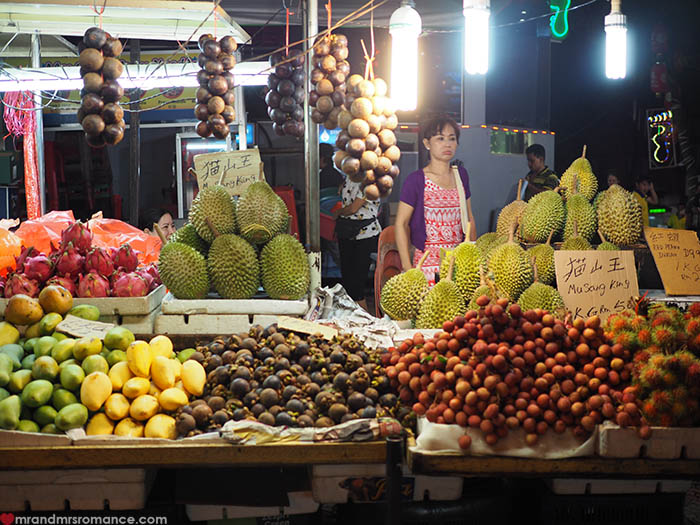 There’s plenty to do in KL. But to narrow it down to what you can do in 24 hours (and have a good night’s sleep), here’s our shortlist:

Petronas Towers and KL Park – this is a must-see while you’re here. The Two Towers are beautiful and so unique, and the park in front of them is lovely too. 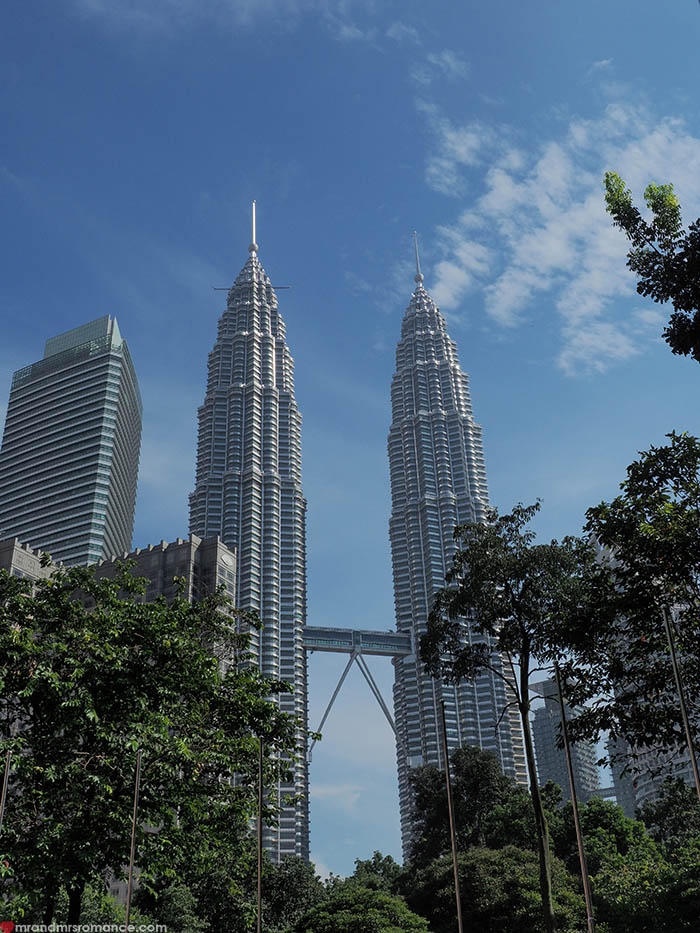 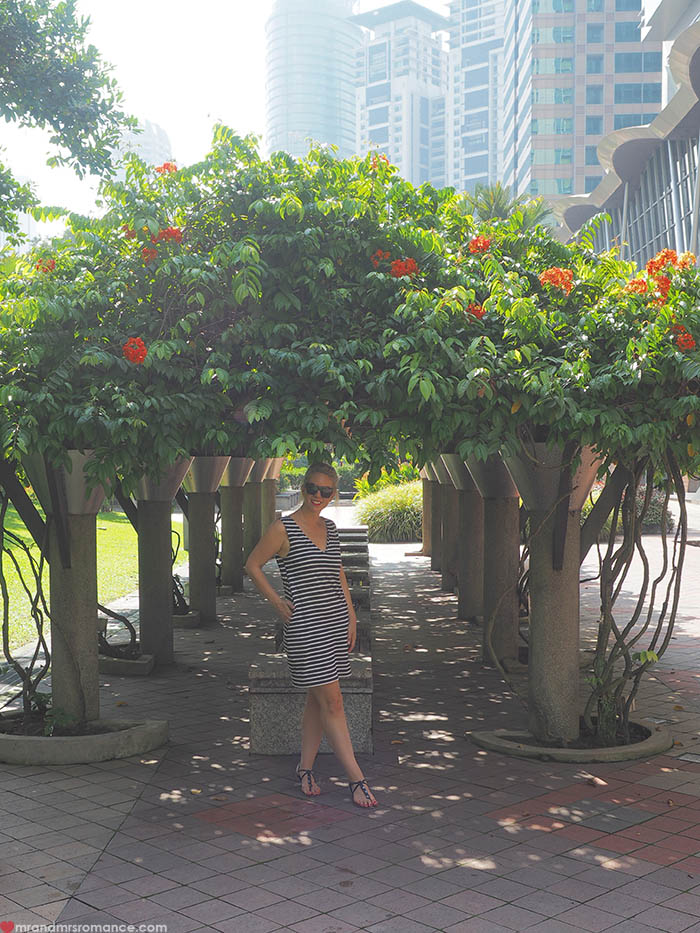 Shopping – head to the malls for some retail therapy and an escape from the humidity. Most of the malls are on the road Jalan Sultan Ismail, which is on a slight hill going up from south to north. The higher you go towards the Petronas Towers the more expensive the malls become. Most of the malls don’t open till about 10am but they’re open all night.

Low Yat Plaza is a mall especially for cheap electronics and well worth a look if you’re after a new GoPro or noise-cancelling headphones, things like that.

Islamic Arts Museum – recommended to us by too many locals to ignore, this fascinating and beautifully decorated museum has some incredible artefacts, models of the world’s most famous mosques and amazingly old books. The elegance and symmetry of Middle Eastern art is really something to be admired. 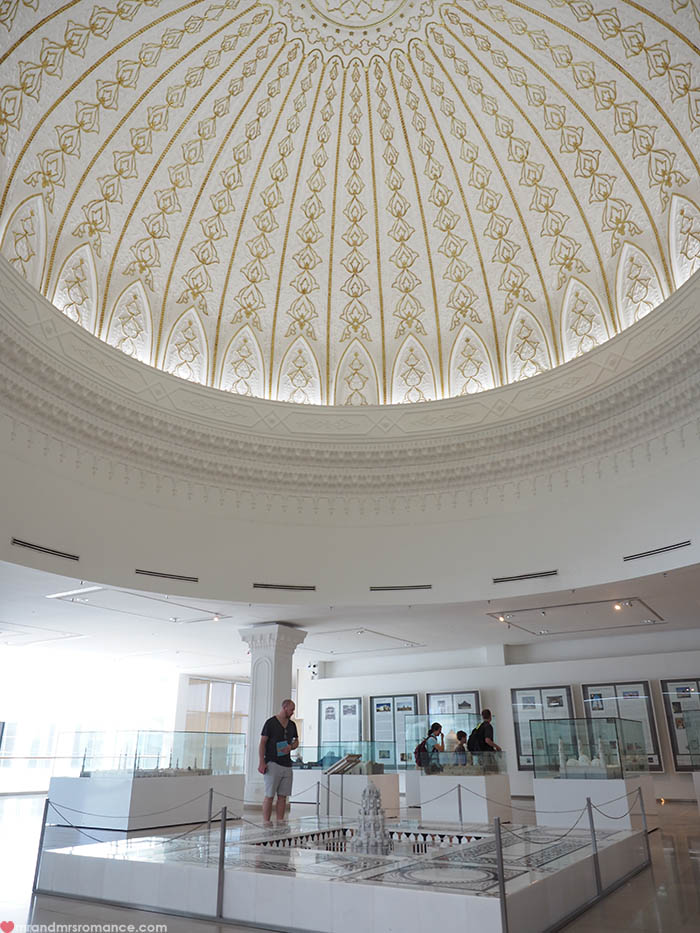 KL Bird Sanctuary and butterfly park – an enormous 20-acre netted aviary you can walk through. It’s Mrs Romance’s idea of hell as she’s not a fan of flying creatures, but for us bird fans, it’s a real treat. Watch out for the cheeky macaque monkeys outside the park though. They’re everywhere! 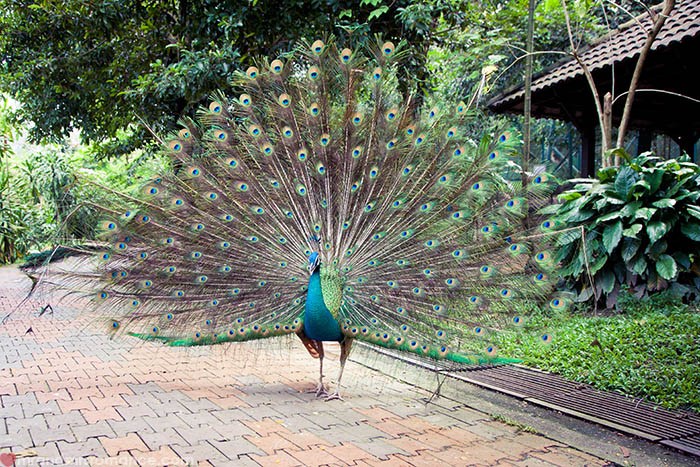 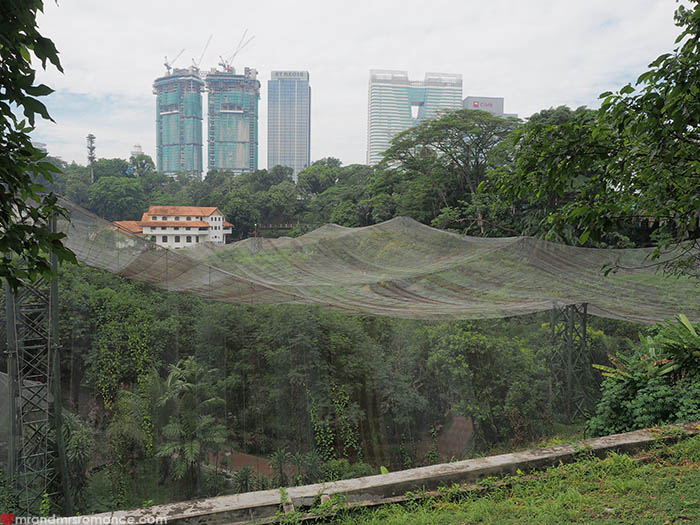 Jalan Petaling – close to the bird park and Islamic Art Museum is Jalan Petaling, KL’s Chinatown and flee market. Also round the corner is the Sri Mahamariamman Hindu Temple. We didn’t get there this time, but this looks beautiful and very interesting. 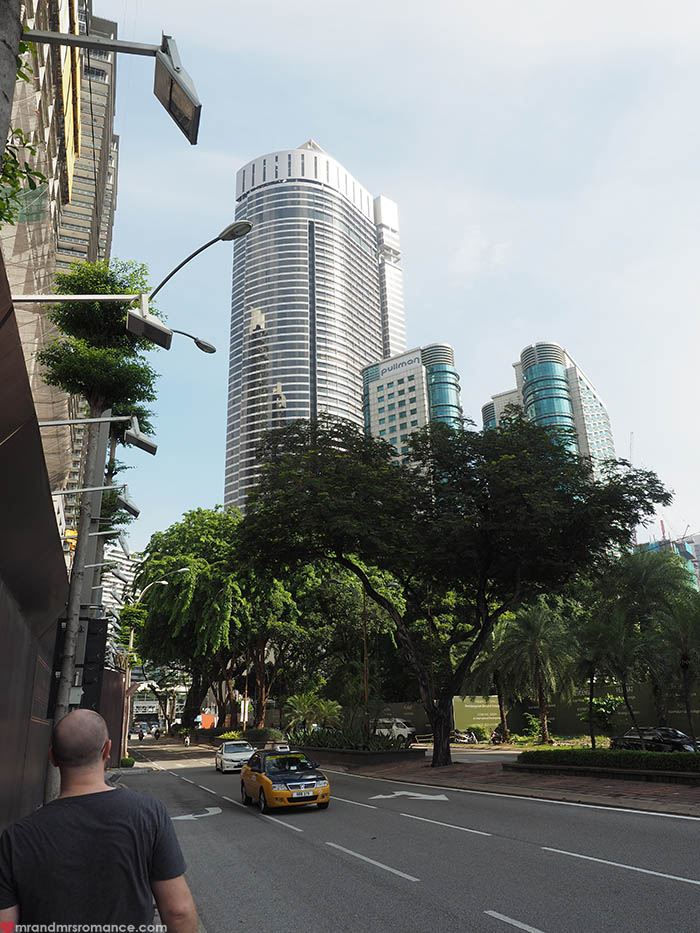 Malaysia and its capital Kuala Lumpur have become a real tourist hotspot in recent years. Especially for those in transit to other parts of Southeast Asia or on antipodean journeys, this bustling hub of the Far East has so much more to offer than just a transit stop.

The only risk is you’ll fall in love with the place and won’t want to go anywhere else! 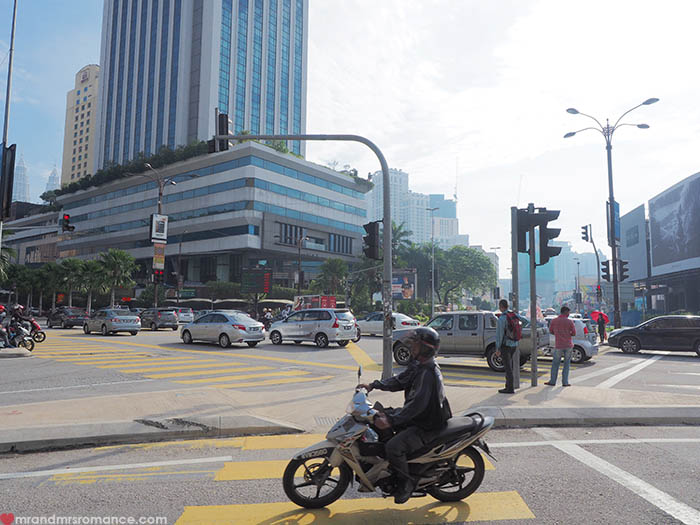 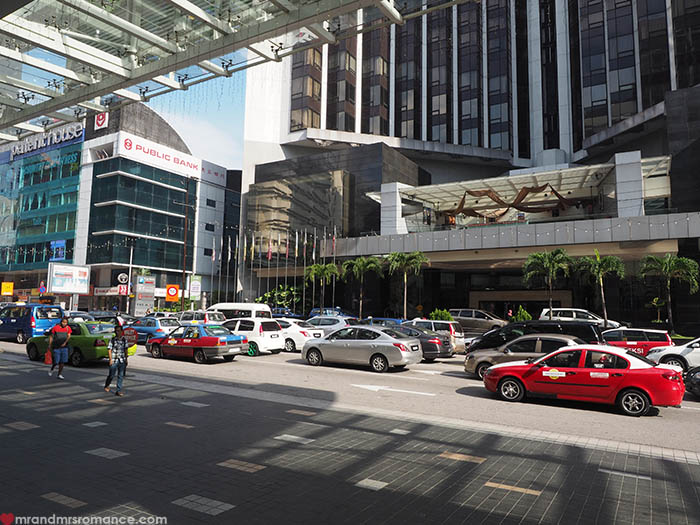 Do you have any tips for visiting Kuala Lumpur? Let us know in the comments!

Well it looks like the autumn is well under way finally. I don’t know about you but we’ve seen a marked change in the…