; Where to eat in East Sydney – Jack & Knife, Darlinghurst – MMRMr and Mrs Romance

In the heart of Darlinghurst, arguably Sydney’s most exciting entertainment district, is a restaurant that not only stands out but fits in just as well. Jack & Knife on lauded Stanley Street is an epitome of balance that makes this restaurant a must-visit dining experience in Sydney.* 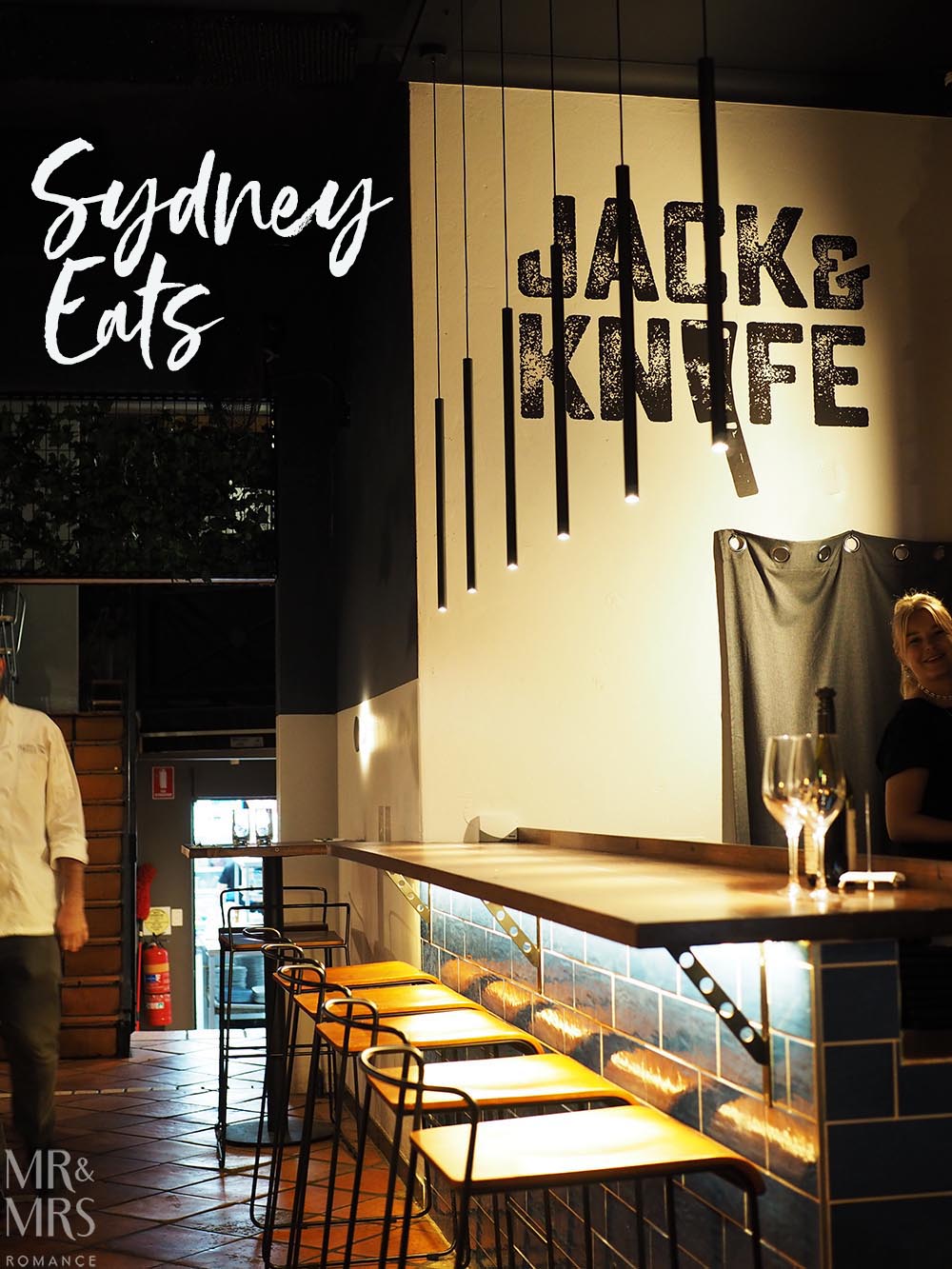 With everything from fine dining to old-school pubs and cafés to cocktail bars, Stanley Street is a wonderful mix of historic importance and modern irreverence.

*Sadly, Jack & Knife became another casualty of Covid and closed its doors for the last time in 2020.

Perhaps it’s this knife-edge balance that has made this Darlinghurst street such a mecca for dining for so long.

With its own scales of balance tipping one way and then the other, Jack & Knife seems to be made for this street. Just off-beat and bohemian enough for modern-day Darlinghurst, while still giving a willing nod to Stanley Street’s legacy. Things like the original Italian terracotta tiles of a bygone pizzeria remain.

Far from creating contradiction and confusion, this balancing act bring an interesting uniqueness to Jack & Knife. And its musing statement that “food is not for thought” that may have foodie purists looking worriedly at each other.

But as far as head chef and restauranteur Chris Shannon is concerned, food is for eating. It’s for sharing. It for enjoying. Let him think about the food. That’s what he’s good at. 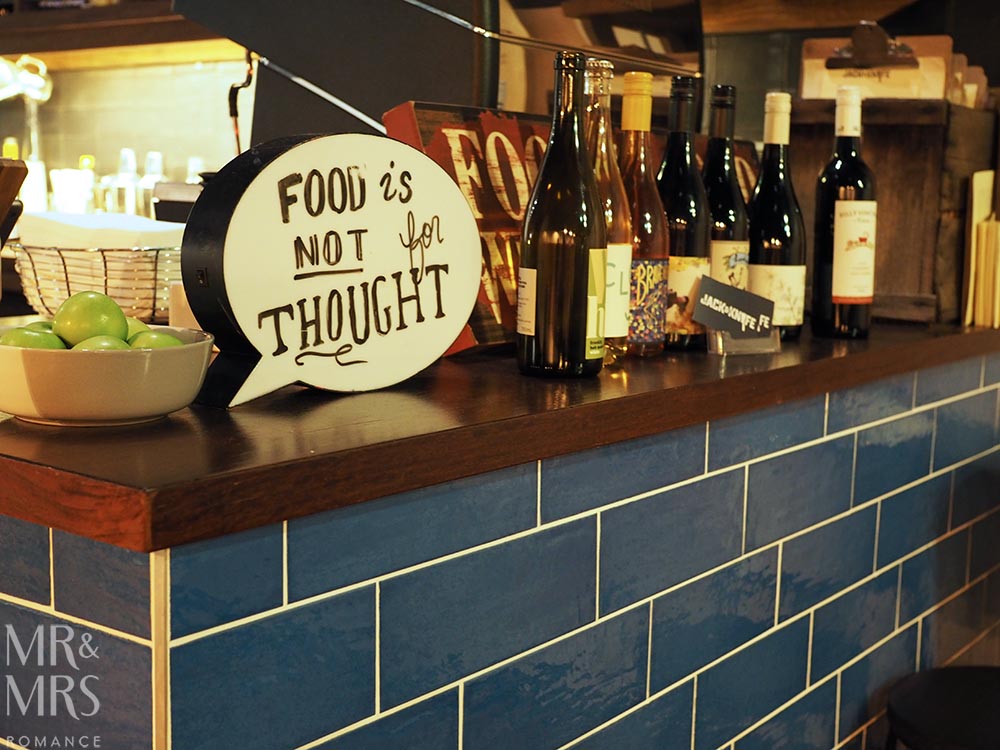 Even the food at Jack & Knife is on a balance. Truly modern dishes made traditionally.

In fact, everything’s made painstakingly in-house – from gin-cured salmon and the 10-day process of making pastrami to wood-fired smoked flatbreads and rustic pastry.

But while the elements of recipes are traditional, the finished products as they come out of the kitchen are far from the norm. 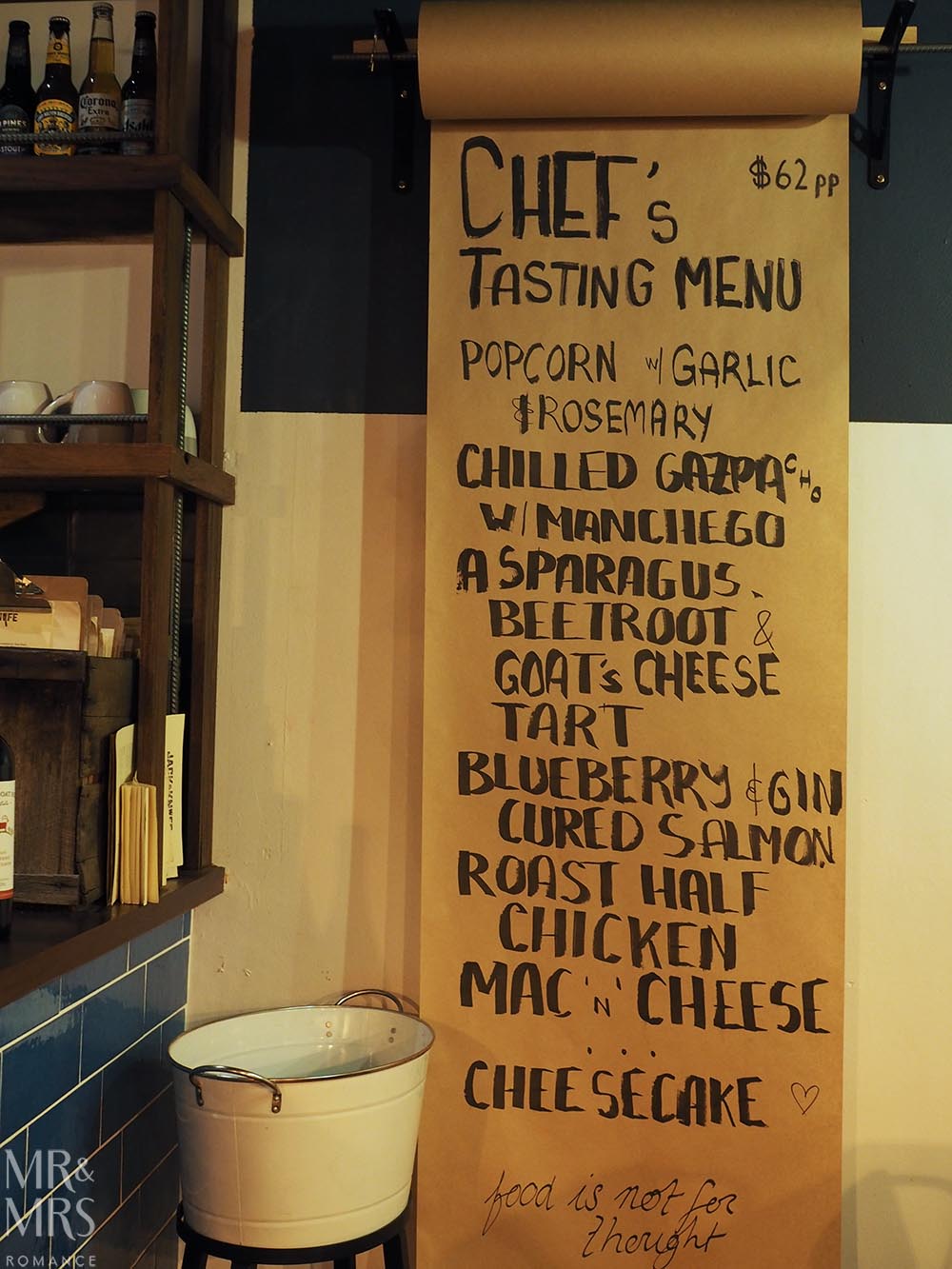 We were treated to some of Chris’ favourite dishes from a menu that makes you want to order more than you should.

We started with cocktails – a delicious rum old fashioned (again, notice the balance of a classic cocktail with a modern twist) and a ‘Darlinghurst’, which is Hayman’s Sloe Gin, fig and vanilla syrup orange bitters and a tonic water top. 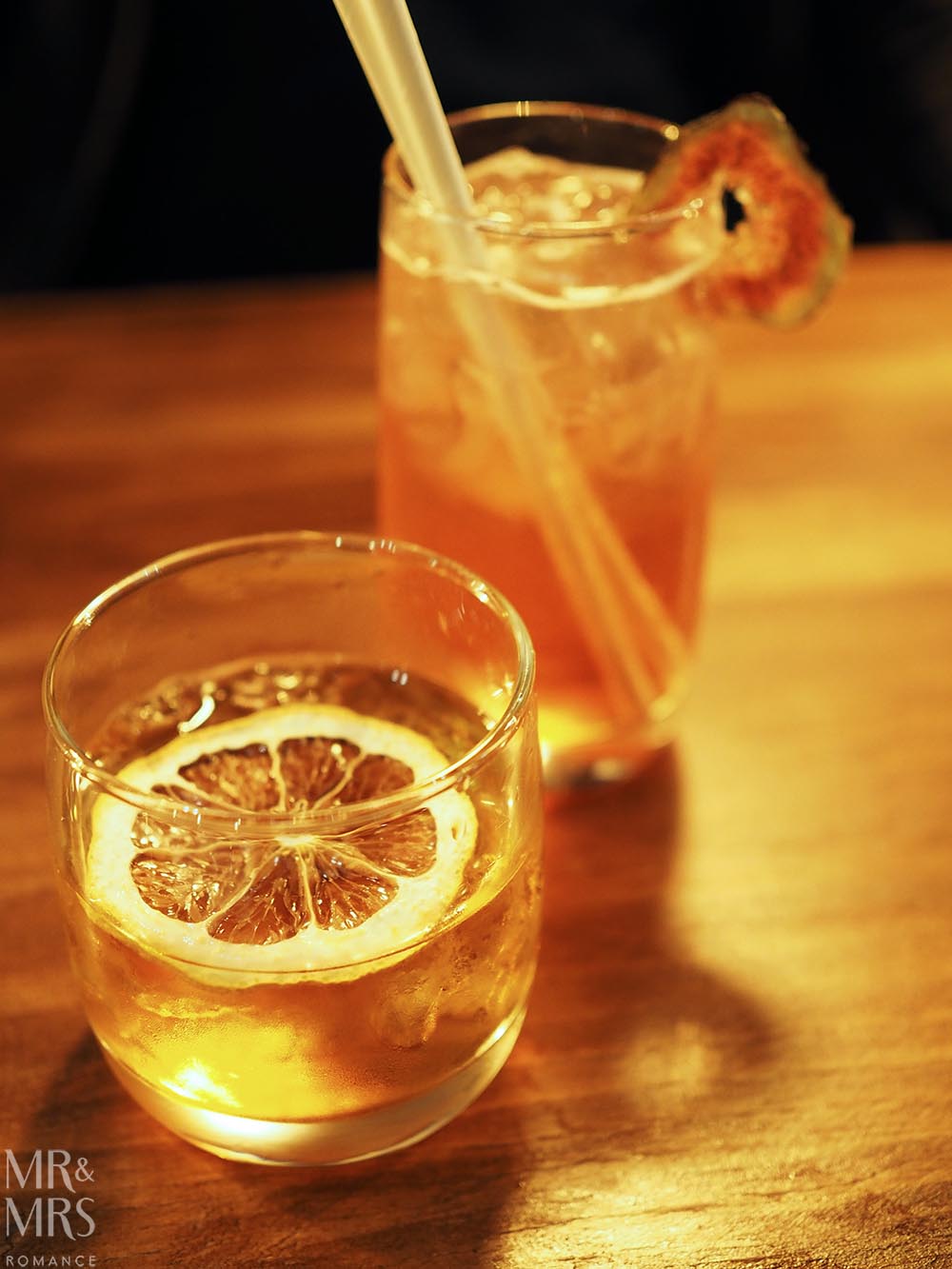 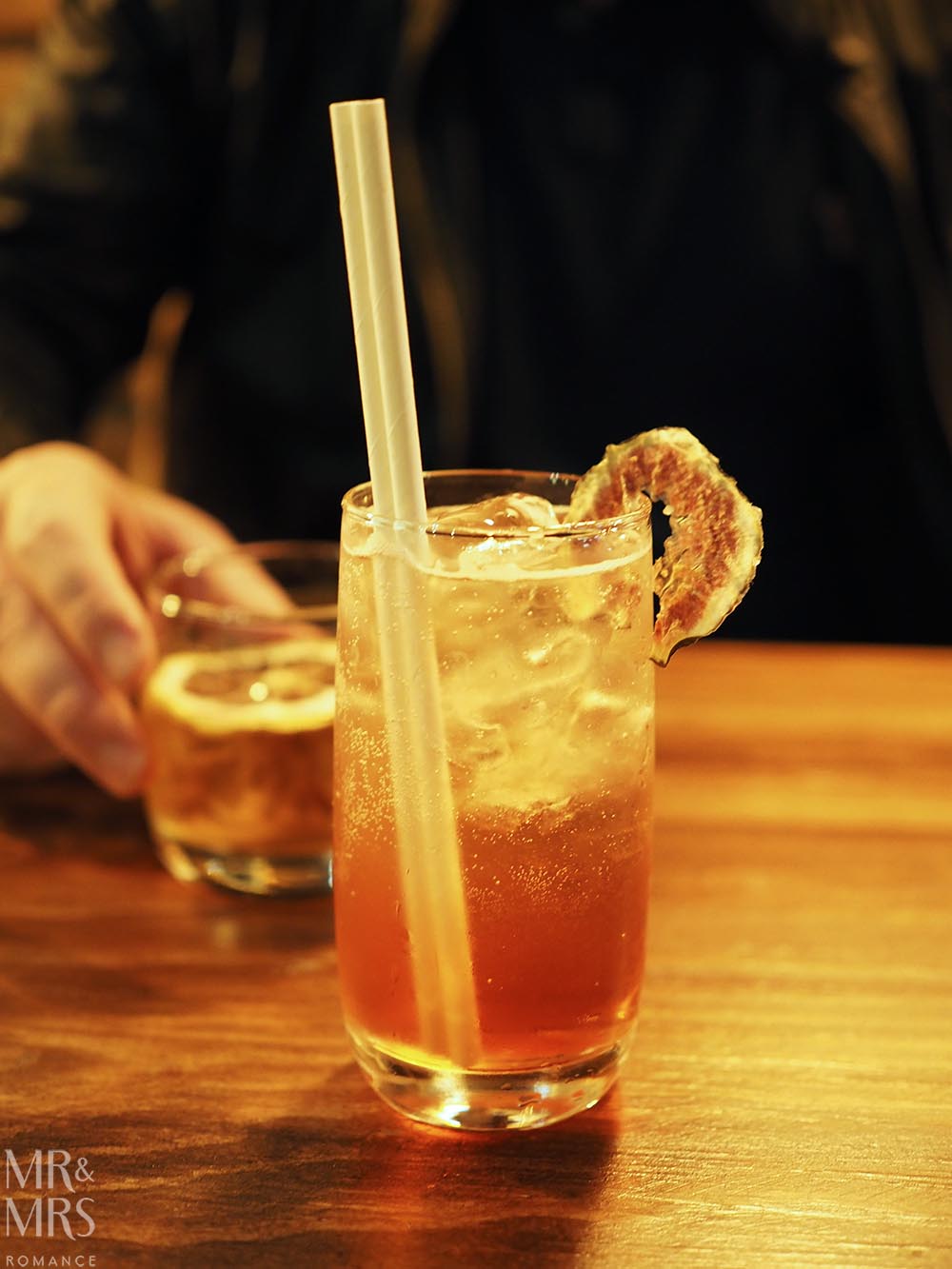 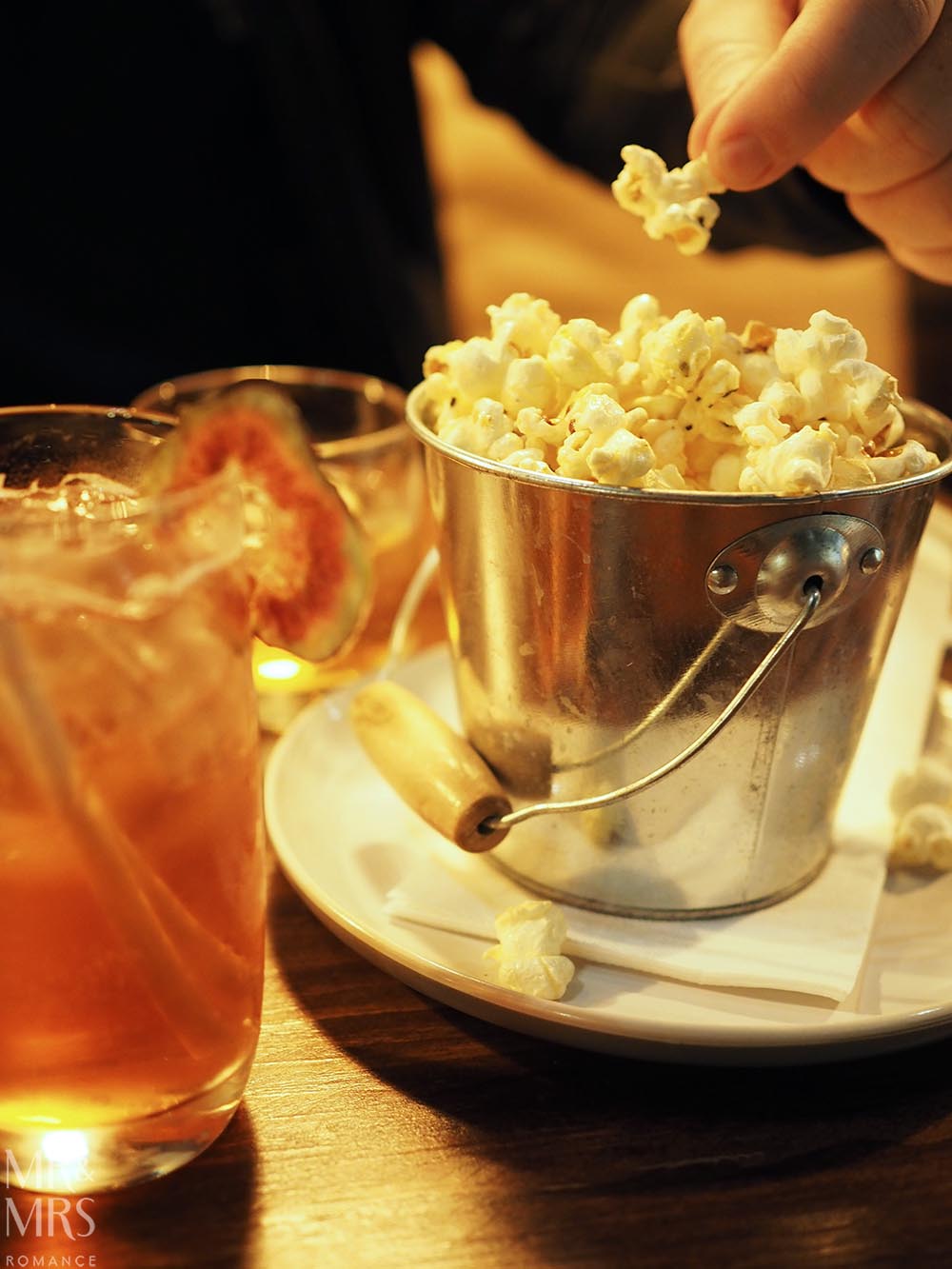 The bucket of popcorn seasoned with rosemary and garlic (this is what I want the next time I go to the cinema by the way) kept the hunger at bay while our entrées were in the making.

Next, the blueberry and gin cured salmon on flatbreads. Chris cures the salmon here and decided to add the blueberries, which give a a beautiful dark purple edge to the fish and also a little sweetness. The gin cure makes the salmon firmer than when it’s smoked yet still tender. 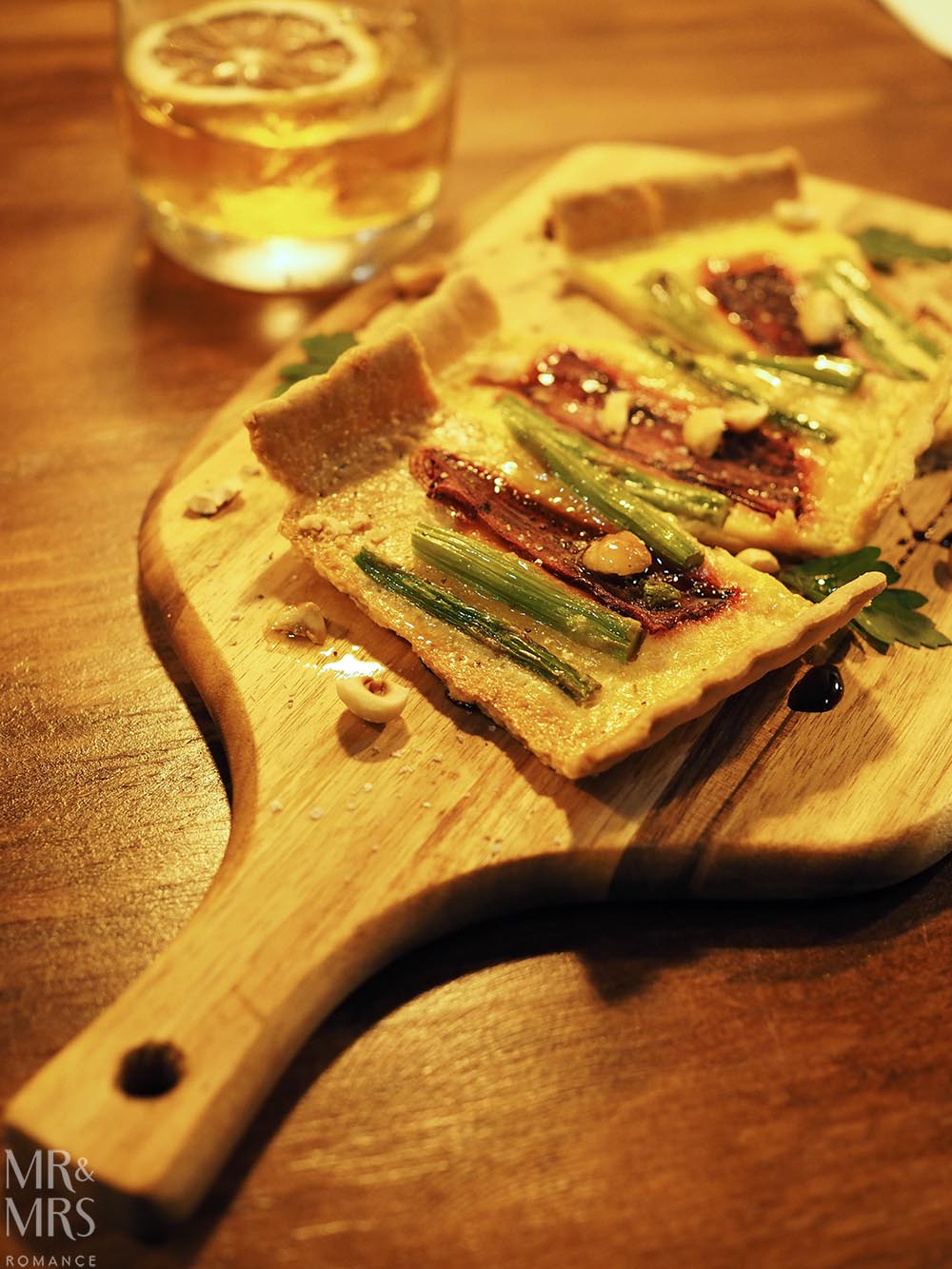 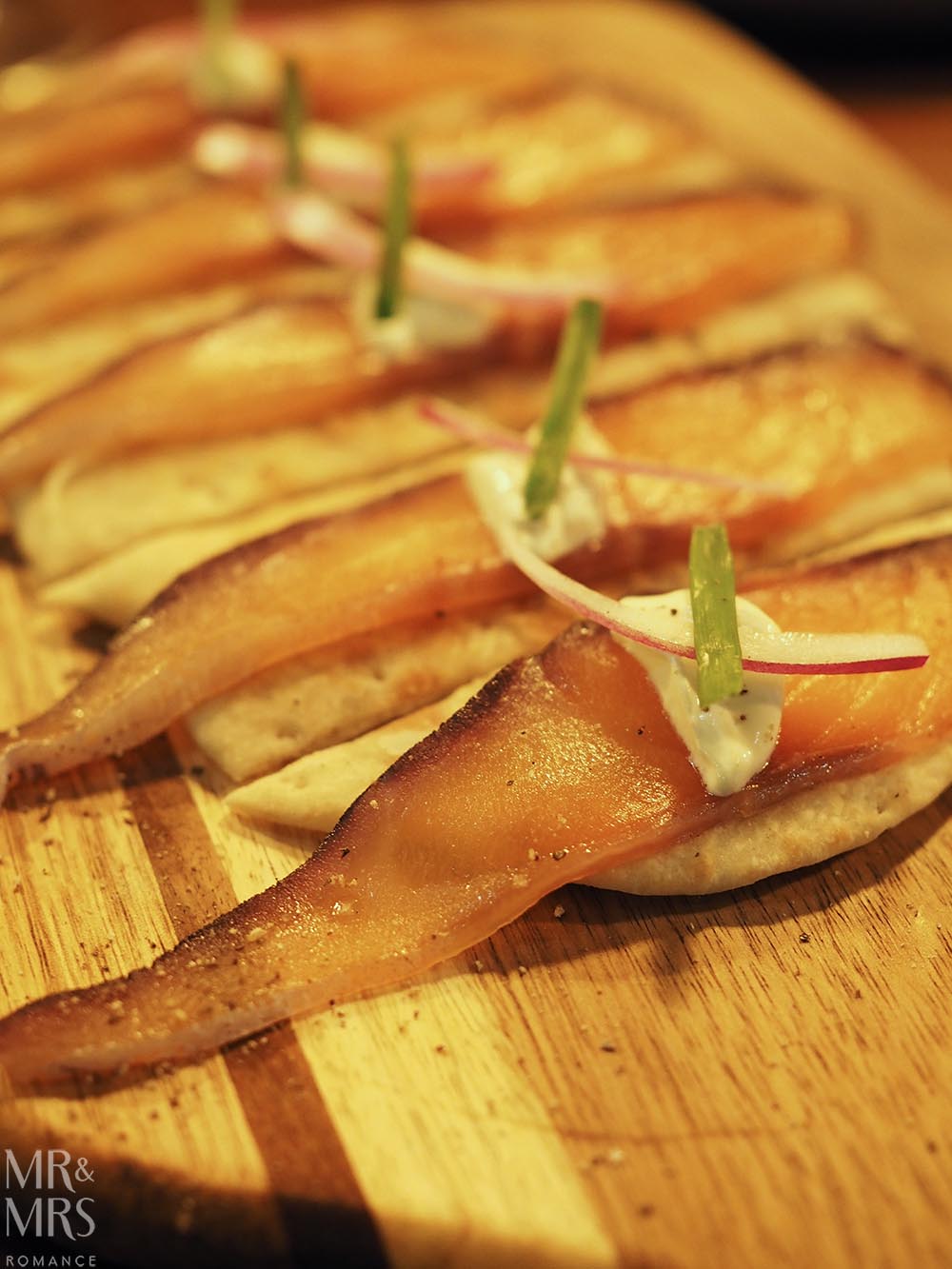 Before the mains come out, Chris insisted we try what we all think will cause lines to form outside Fork & Knife when word gets out:

If you haven’t had beef tartare before, this is perhaps a dangerous place to start. It could well spoil all tartare in the future for you!

Chris uses beef tenderloin with minimal marbling to create a smooth, fine tartare. The meat tops bread that has crunch from being cooked in butter that’s fluffy yet firm. The cheeses – gruyere, Stilton and cheddar – turbo-charge the dish. 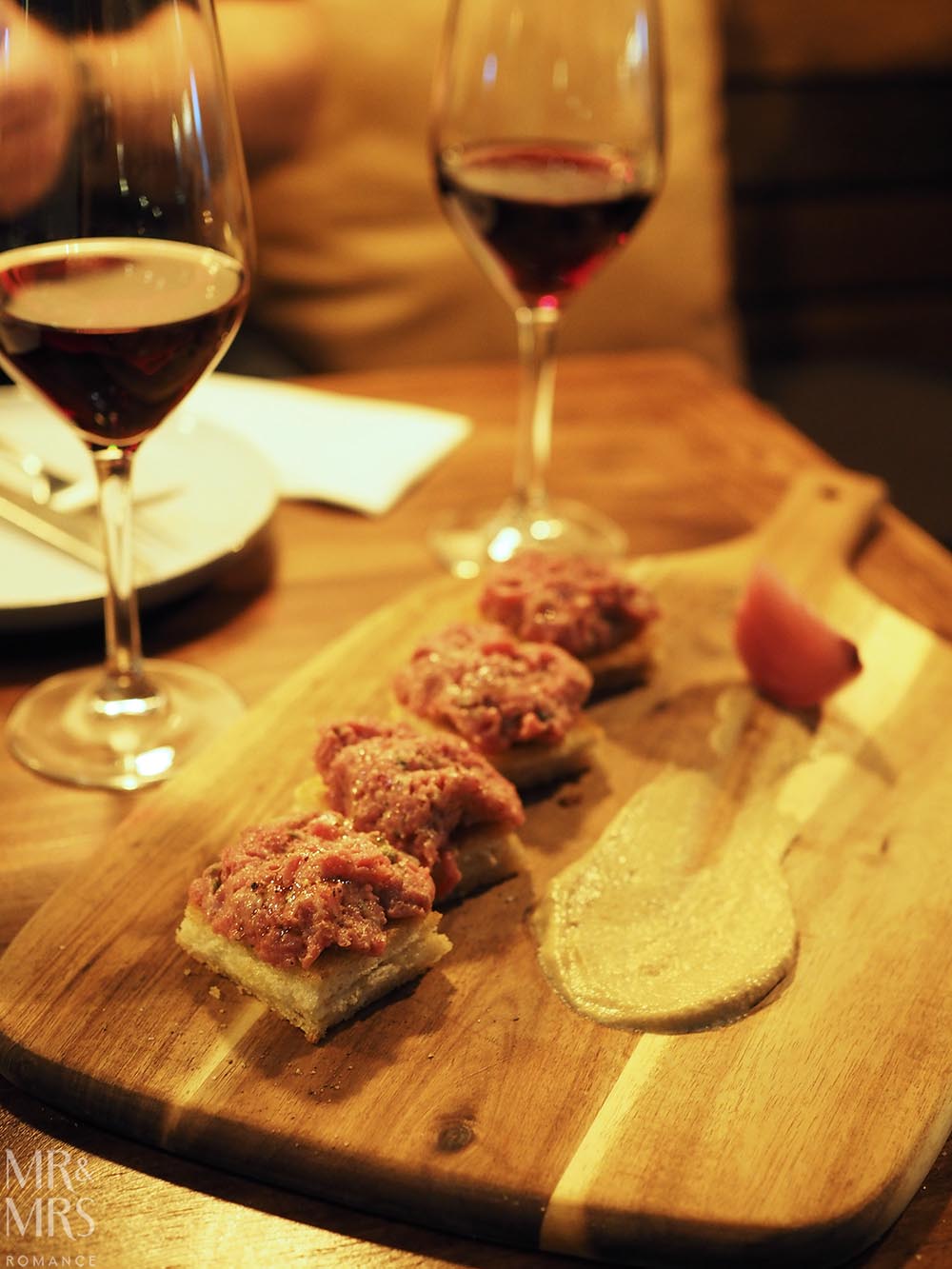 You take each bite of the tartare toastie with a dot of Dijon and after each bite, take a nibble of picked red onion, which is also made in-house, to cut through the richness.

If I could eat this on a foot-long, I would.

It’s almost a step down when the mains come out. Almost.

Roast chicken, which is soaked in a sugar brine for 42 hours to retain moisture, is superbly tender and perfectly roasted. It comes on a tomato and olive bed with high quality olive oil. 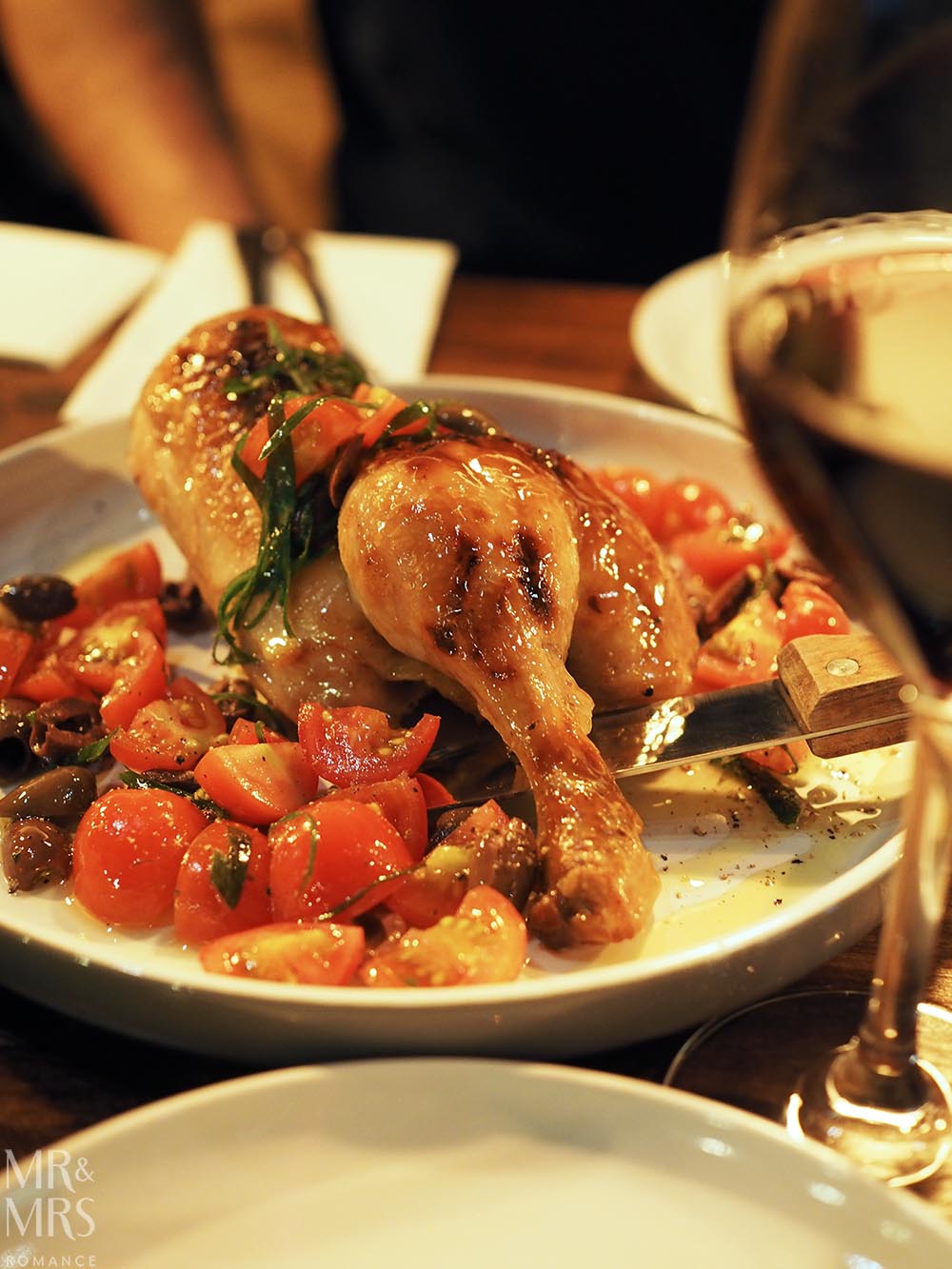 Side of the much-anticipated pumpkin and the iceberg lettuce wedge join the chicken.

The pumpkin is delicious. Sweet from roasting and from the honey dressing, the pumpkin is tender and creamy. Measured by the crunch from the pecans and the sour cream on the side, this dish also has balance.

Bringing the biggest surprise of the night, the iceberg lettuce wedge is sensational. When I first saw this on the menu, I wondered what it was doing there. Now I know. It’s Chris’ nod to New Orleans’ French Quarter and has a with delicious blue cheese sauce and generous bed of capsicum and tomato. 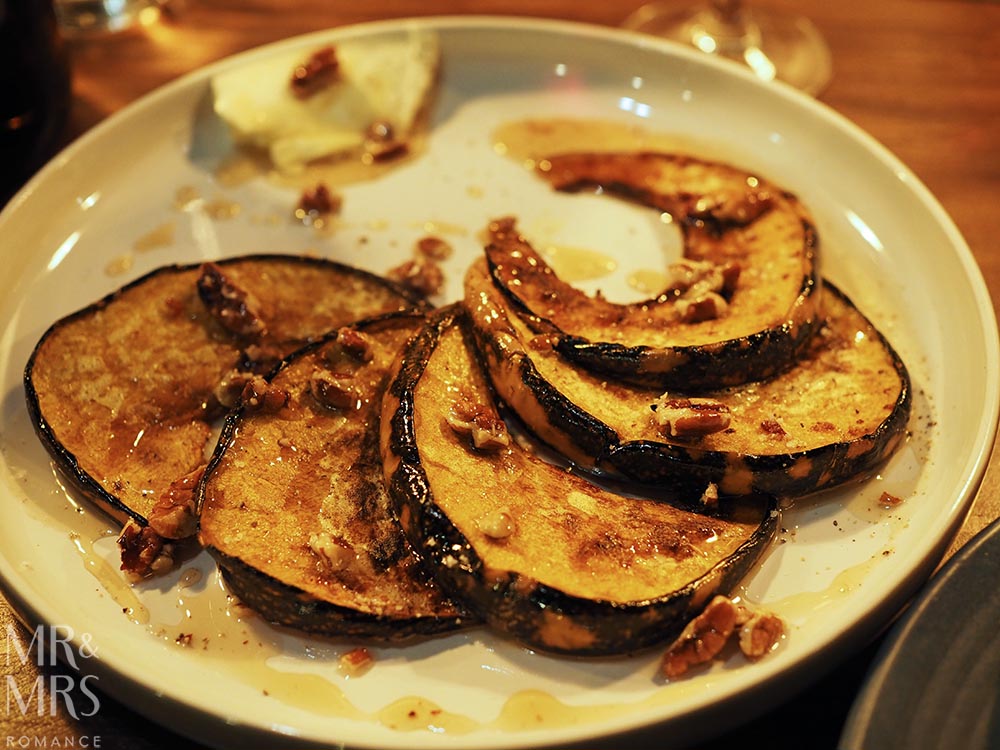 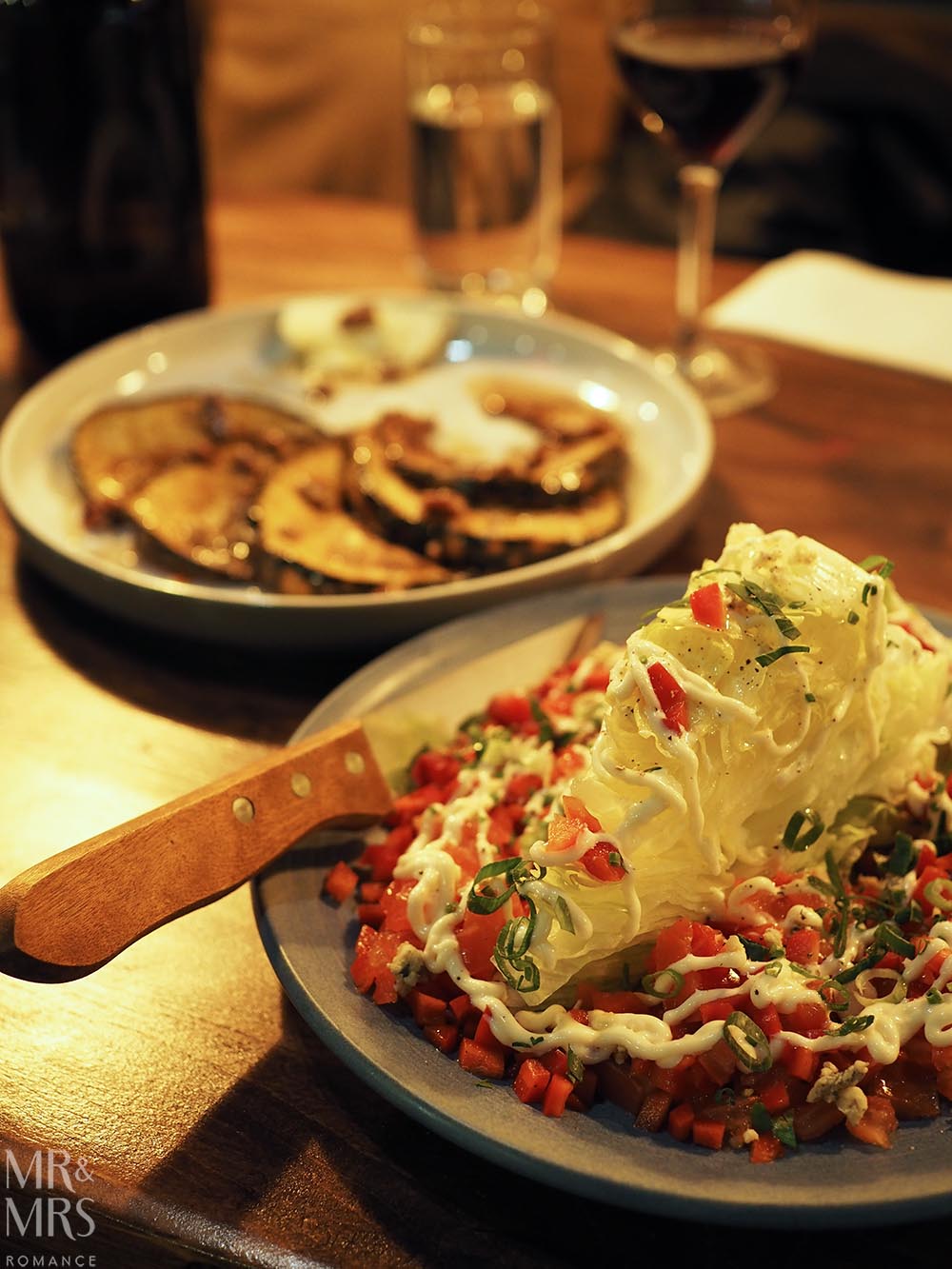 Finally, we somehow manage dessert. At Chris’ recommendation, we give the Jack Daniels choc mousse a try. It’s nothing short of genius.

Made with Lindor chocolate, Chris has blended bourbon with condensed milk for that balance of sweetness and whiskey. The Ball jar dish is topped with peanut brittle and a toasted marshmallow, which Chris also makes on the premises. Of course he does! 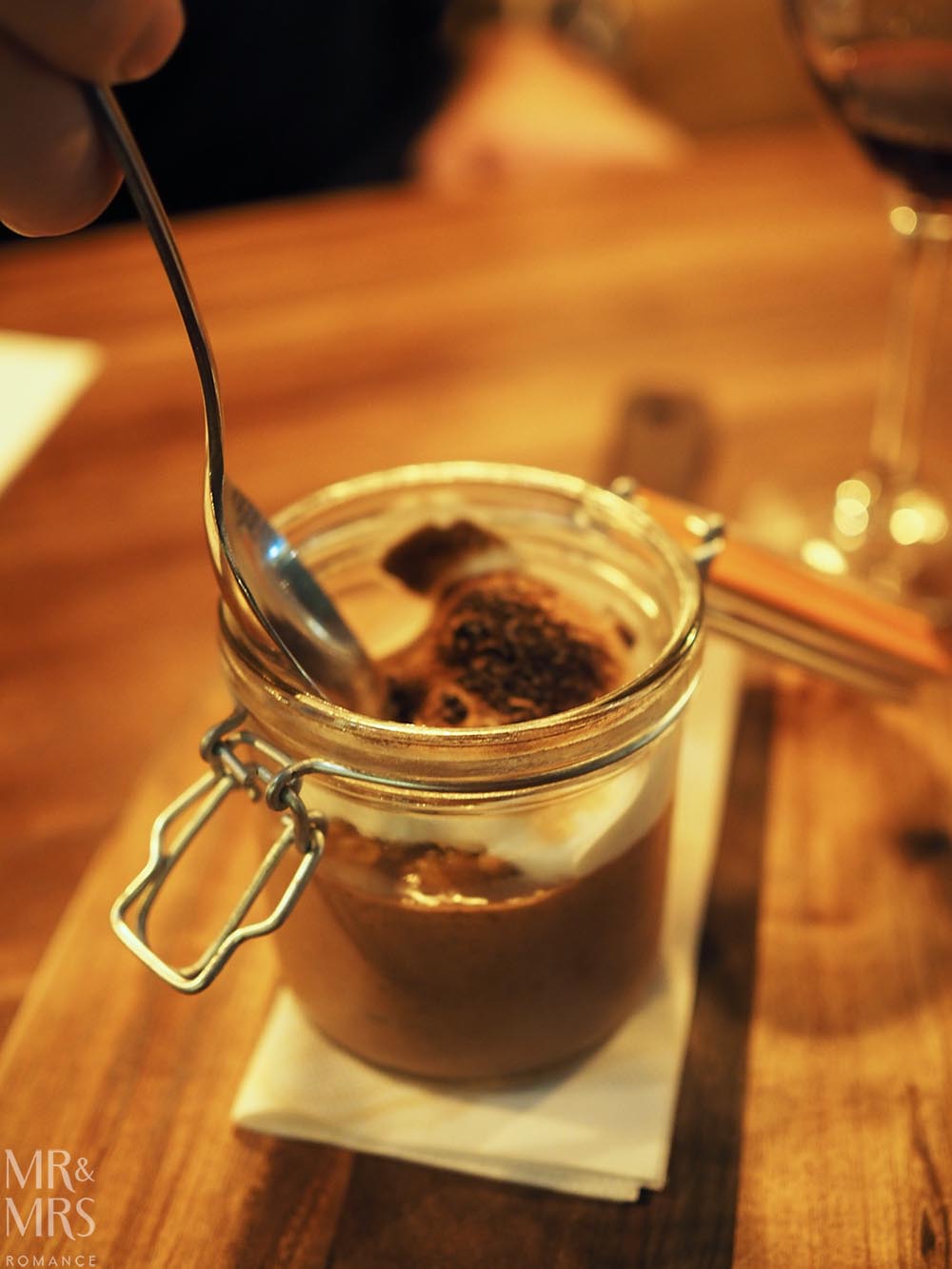 Chris Shannon has a passion for food, but also for wine. He has an interesting perspective though, as he looks at wine not just for drinking but also for eating. Much of the wine he has is geared towards the dishes he’s serving.

It must make choosing wine for the restaurant so much more complicated – the blessing and the curse a chef-owner has to live with. 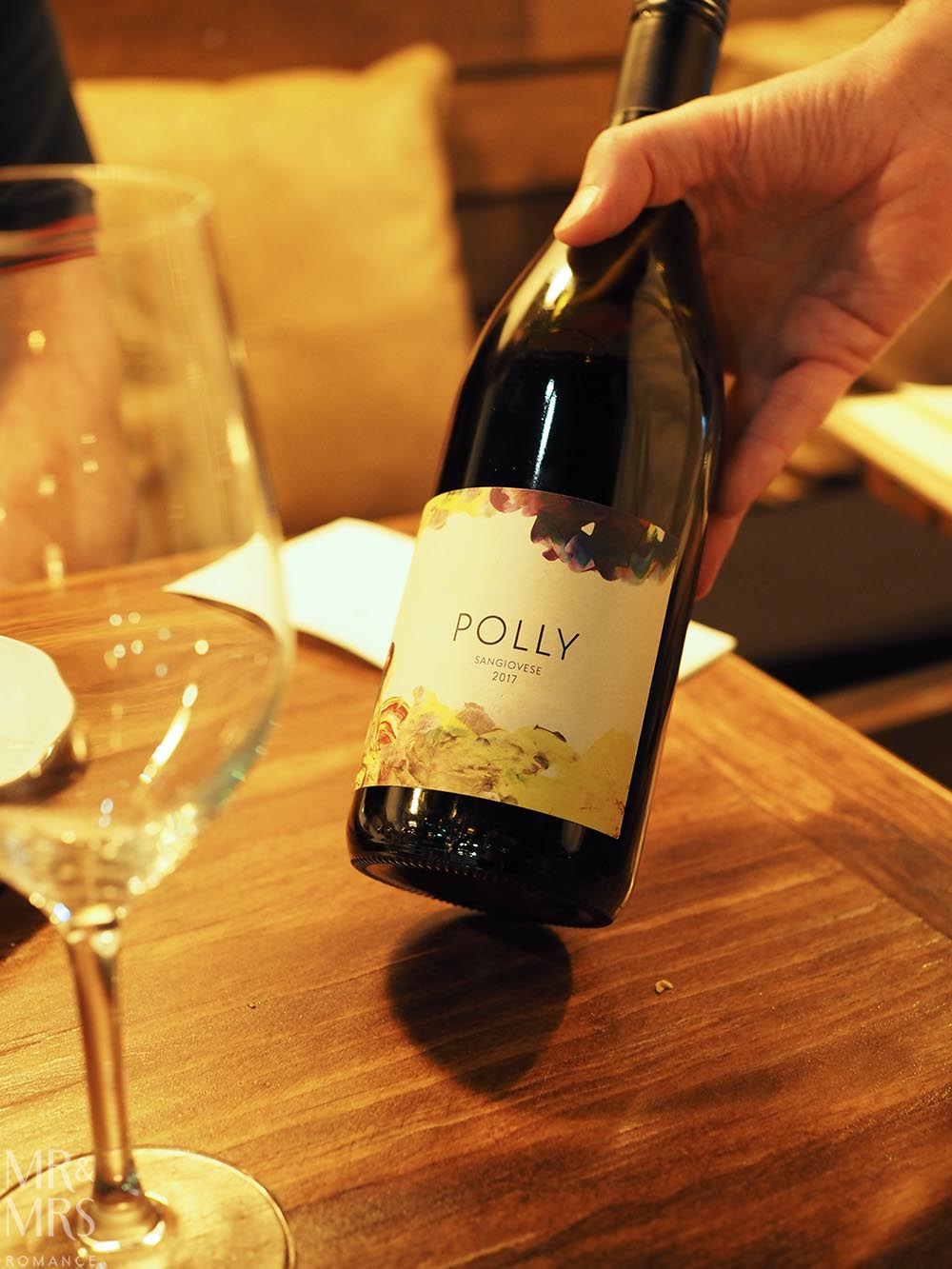 The wine menu is excellent, but on the wall, you’ll see the special wines Chris has brought to the bar. These are all from small-production craft wineries, many of which are too small to have their own cellar doors.

Chris and his staff do a great job pairing wine to compliment the dishes you’ve chosen, so make sure you ask when you’re here. 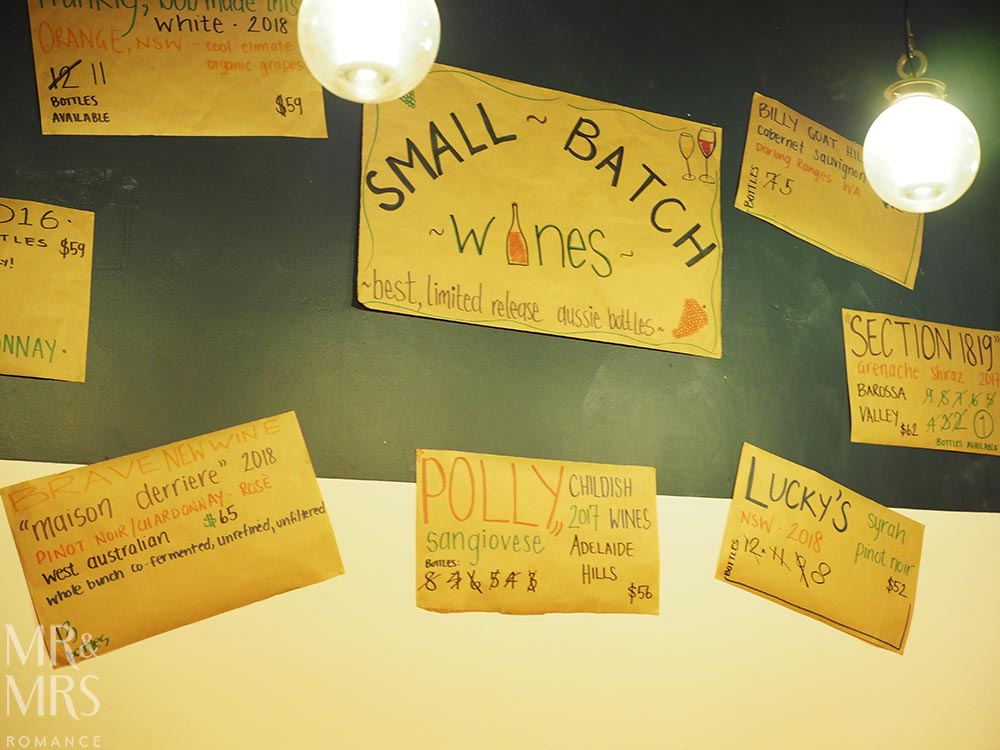 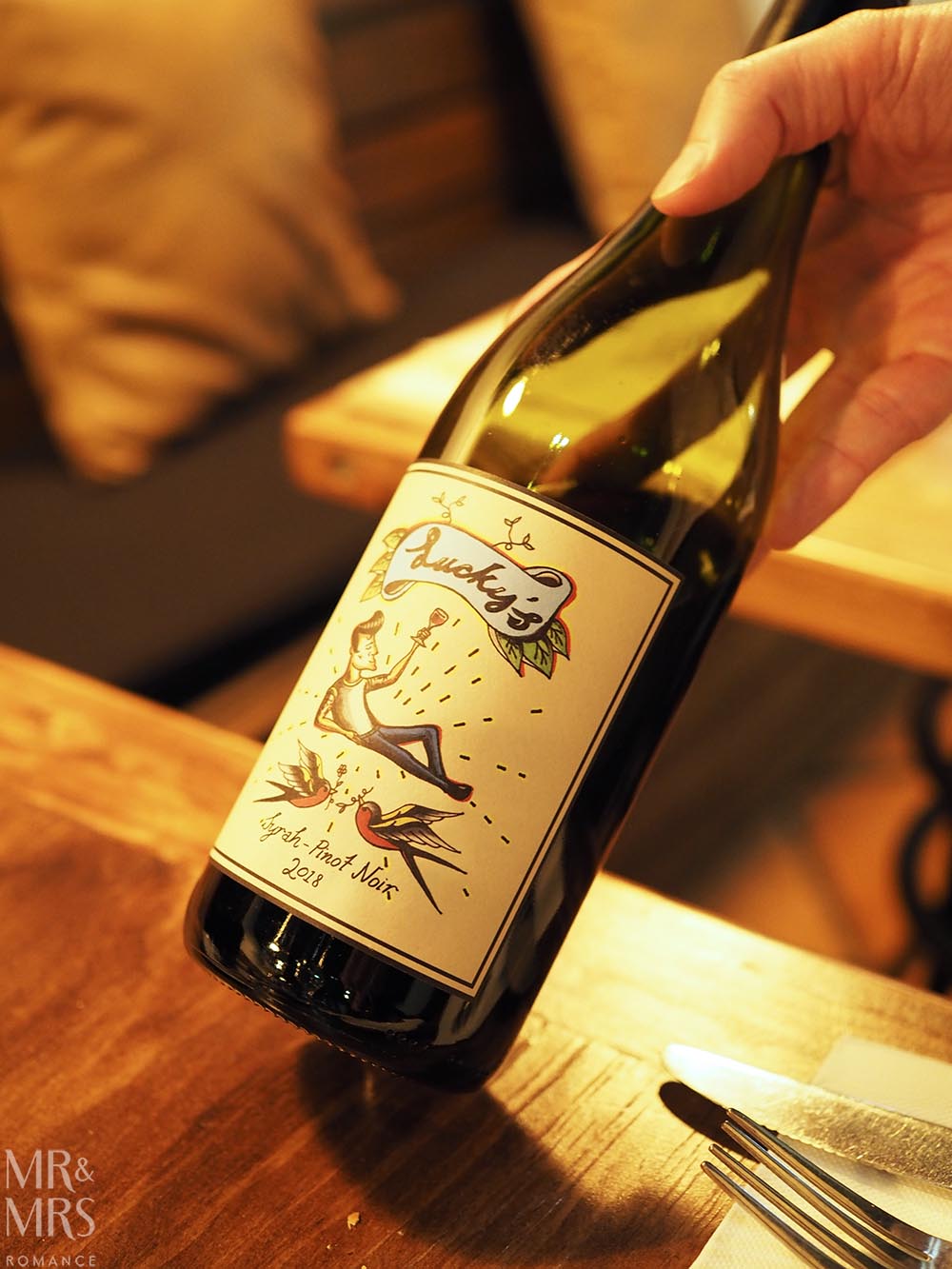 To be honest, when we first saw the name Jack & Knife, Christina and I didn’t understand it. We thought it was perhaps a steak joint or something to do with trucks, which can jack-knife when they skid and crash. 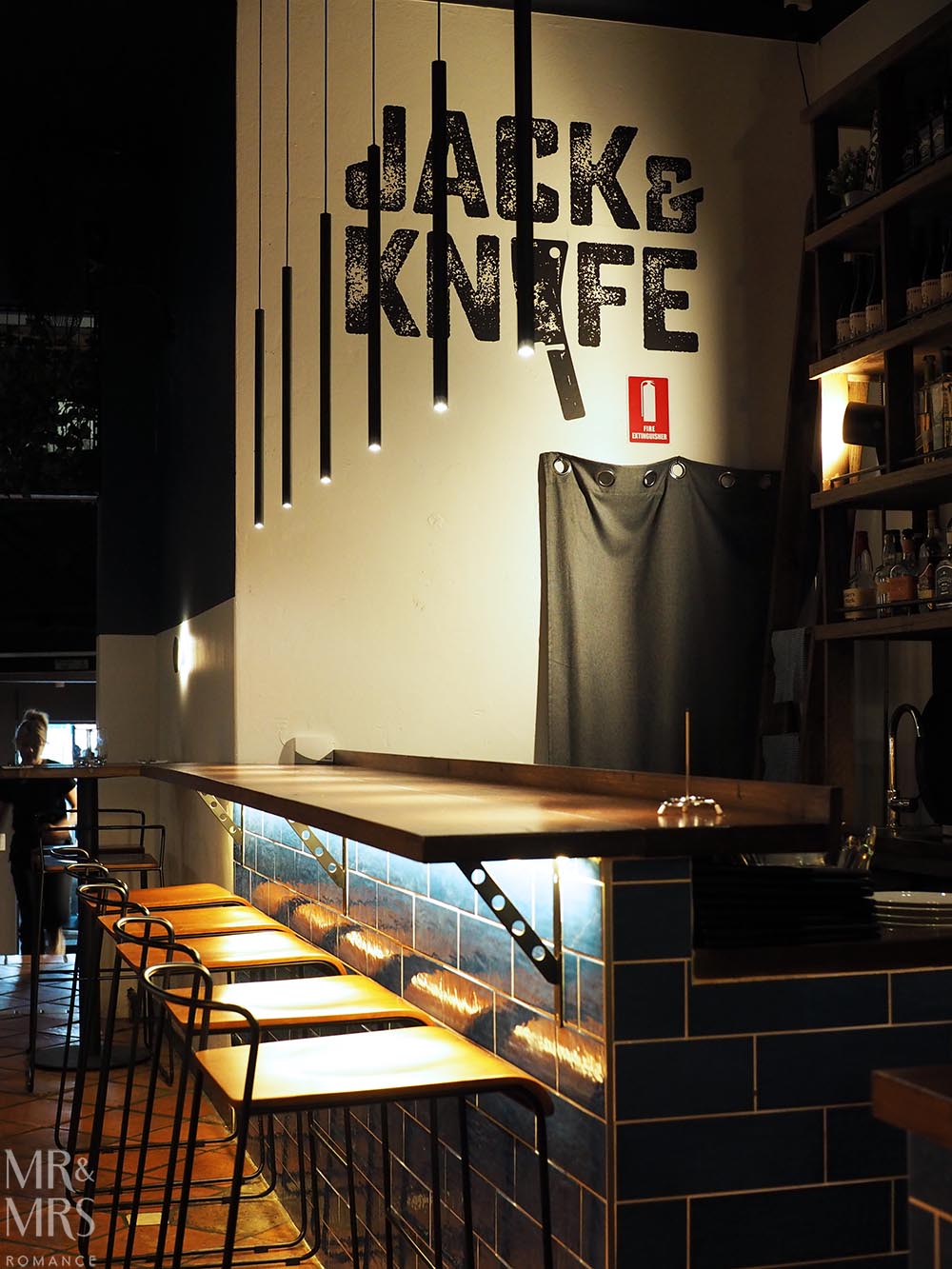 But Chris explains it came from when he was growing up in Canada and would use a jack knife he carried to shave slices of Pemmican (dried venison). He identifies this as the root of his love of food and kitchens.

“Since then, I believe food brings people together, and our restaurant is a place where people can connect and reconnect over an awesome meal / drink. Jack & Knife is a representation of that – Jack representing the people, Knife, representing the food – and of course a tribute to what got me here in the first place.”

And Chris has certainly come a long way since those early days hunting in the Canadian backwoods – figuratively and literally. Running restaurants and hotels in the finest parts of London and Europe, and now running his own place in Sydney, Chris’ journey is a fascinating one.

It’s also a journey that has brought an understanding of how to put all Chris’ knowledge, passion and personality into the dishes Jack & Knife will ever be known. 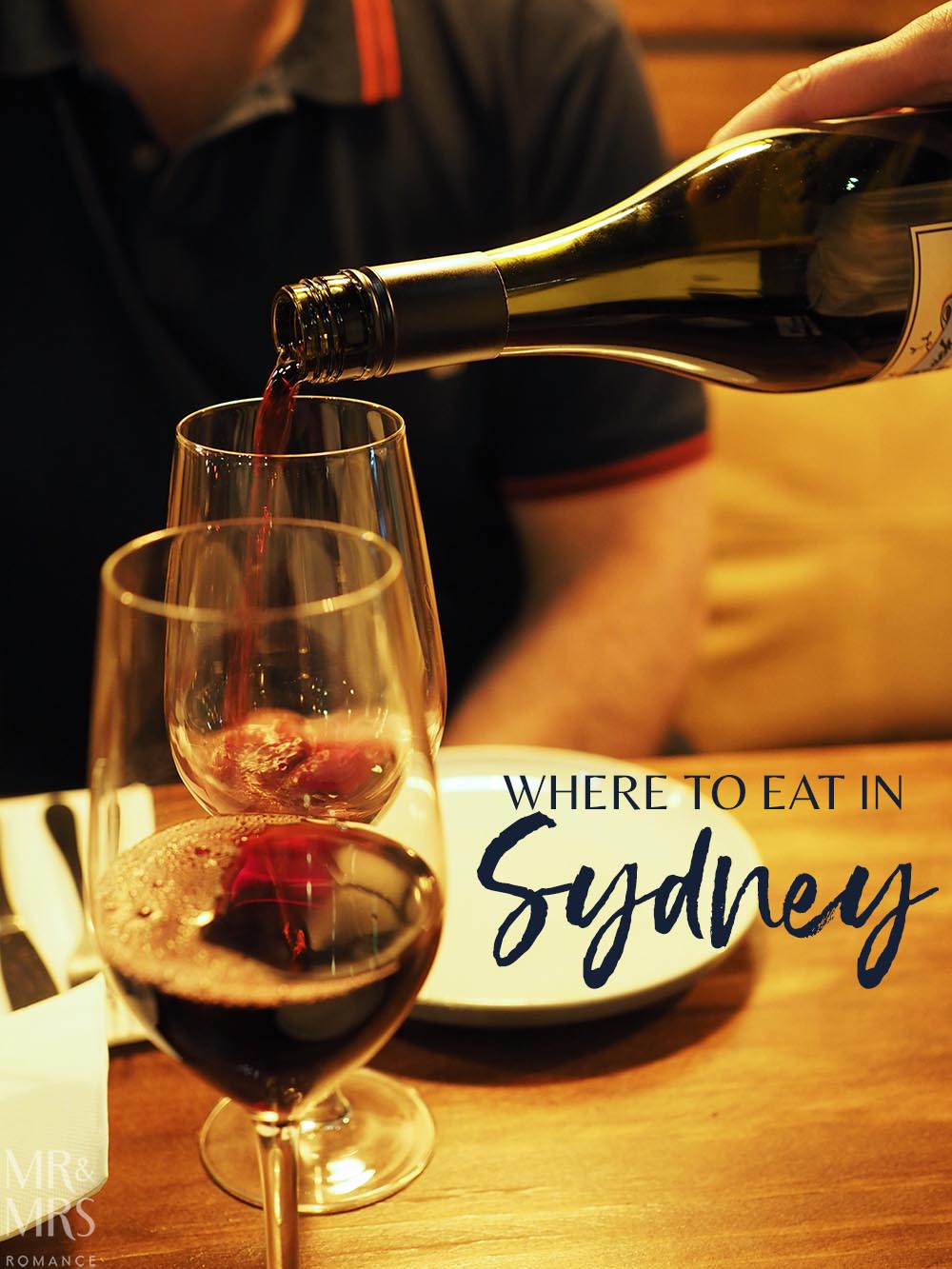 We dined as guests of Jack & Knife.

An LA hotel, a magic burger and San Diego Halloween

As we head south on our drive from Los Angeles to San Diego, we switch on the radio. Cold Play’s A Sky Full of…