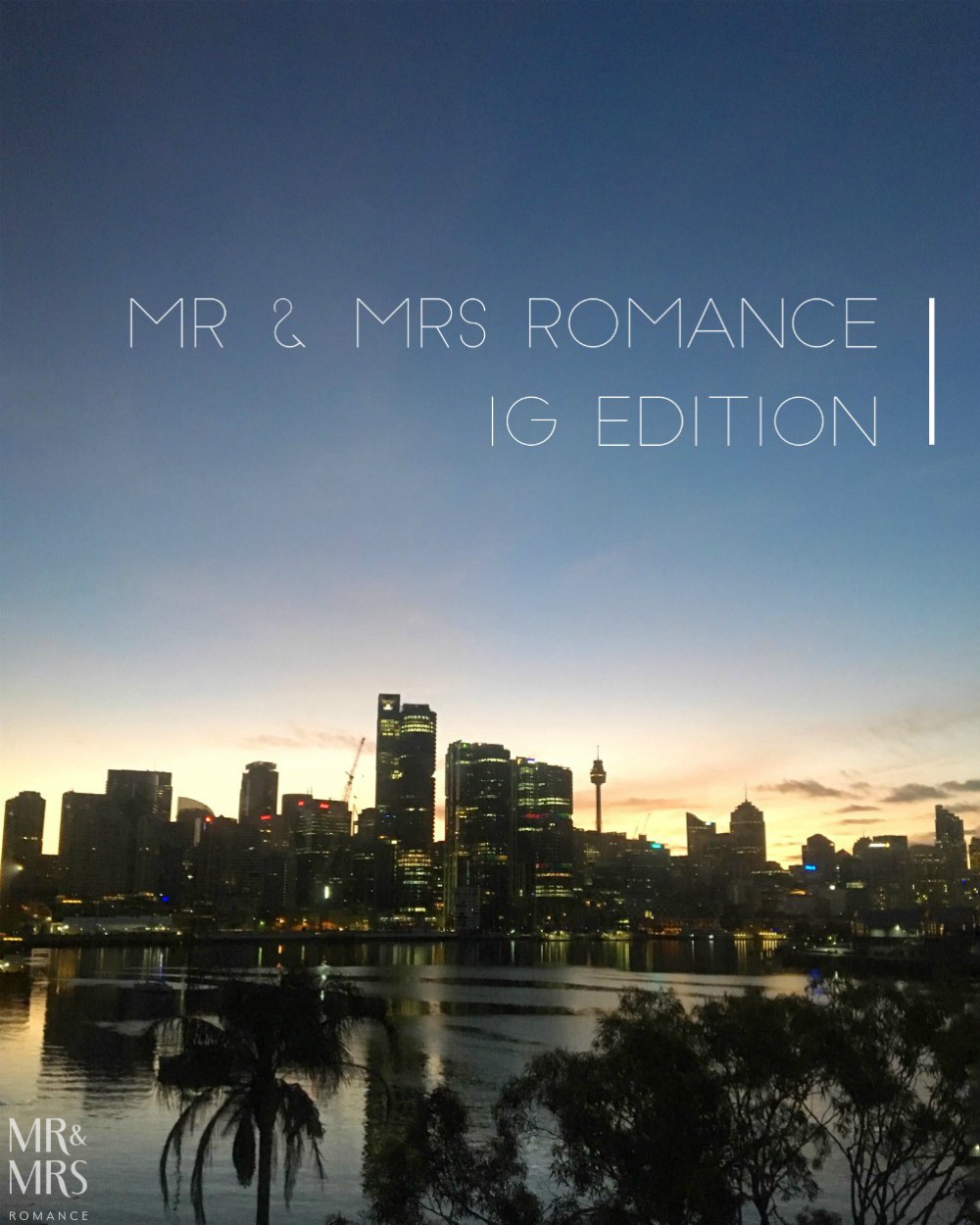 In many ways, I love this time of year. Yes, the Christmas season means all the stress of Christmas shopping and organising plans for the festive season.

But on the other hand it means summer’s almost here and you start to see invitations to all kinds of awesome parties.

This week just gone definitely had plenty of the latter and thankfully not too much of the former, with an amazing 40th birthday party, a beer festival and a evening marking the start of a worldwide celebration of Italian food. 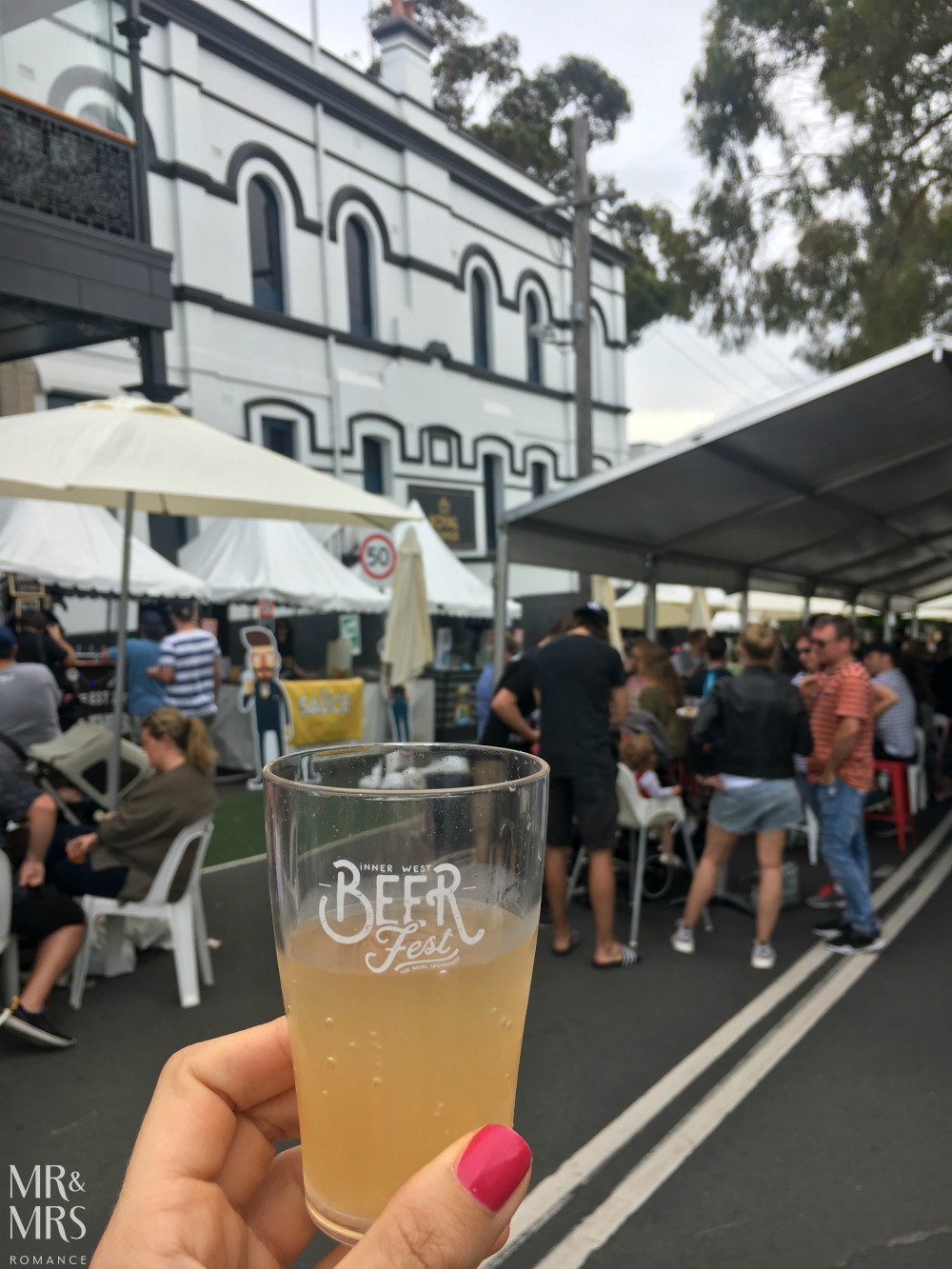 You know an IG Edition is off to a good start when it begins with a beer festival! This is the inaugural Inner West Beer Fest in Leichhardt hosted by the Royal Hotel on Norton Street.

It’s a celebration of breweries on the Inner West of Sydney – and it’s only when you start to think about it that you realise how many there are in this fascinating region of the city.

The Royal Hotel – an institution of a pub – has done an amazing job putting this together. They’ve closed off Carlisle Street off Norton and have installed the breweries, food stalls and music. And best of all, plenty of seating. Always an issue at festivals.

Free to enter, you then pay $5 for a tasting cup, which you keep, and $25 for 10 tasting coupons. You can buy more coupons if you want, but after 10 midis of the good stuff, you’re certainly on your way!

By the way, first beer down is the extraordinary ginger beer by Brookvale Union Brewery. It’s dangerous stuff like a dream but it’s still 4%. 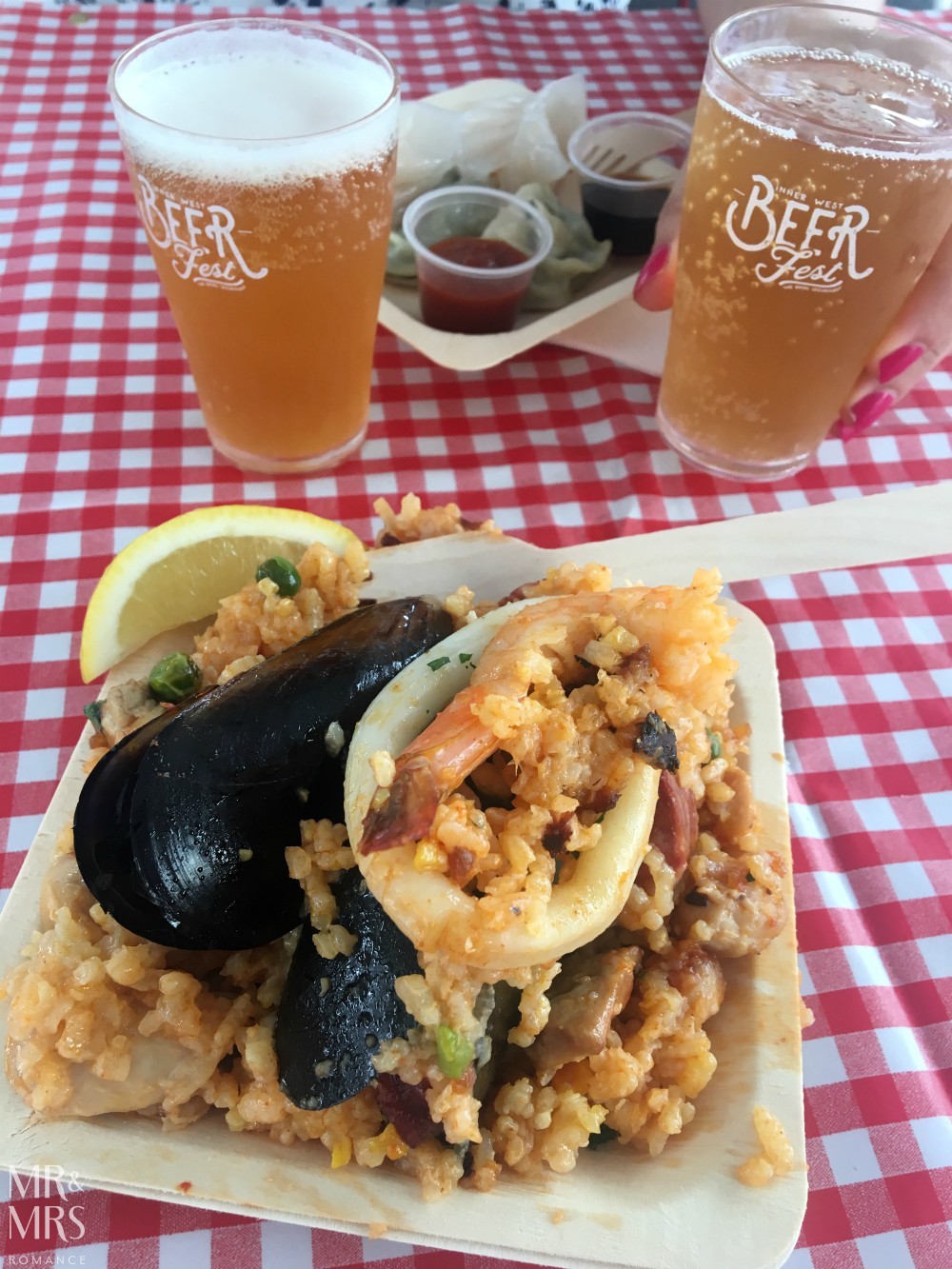 We sample the house-made paella, which is actually superb – though the poor chef is a bit stressed about the whole thing. It’s his first paella in quite a while. Don’t worry, mate. You nailed it!

There’s also a mixed plate of dumplings available, which are pretty good too. You can also order food from the regular bar menu in the pub too.

Next beer up is from Batch Brewery in Marrickville. They also have a ginger beer, but it’s not a mark on the Brookvale one. For me, their best beer is and always will be their incredible milk stout, which you can often find in the Royal Albert Pub in Surry Hills by the way. 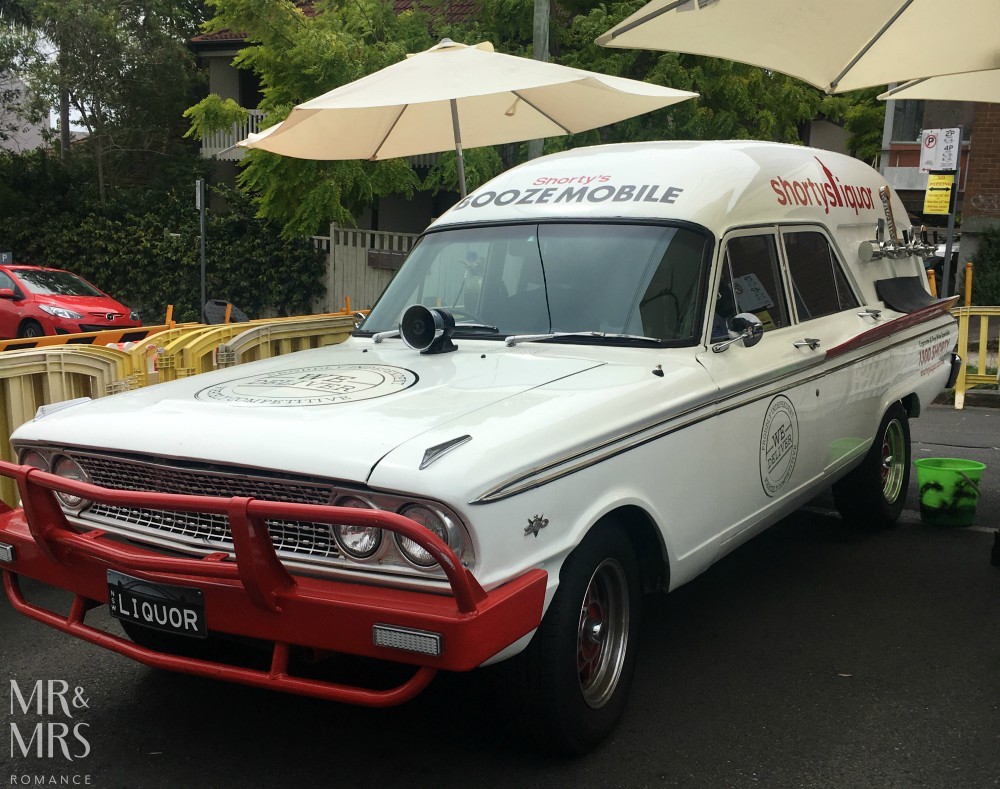 We have a quick wander round the beer fest. At the end of the venue is this amazing creature. At first I thought we had a ghost problem at the venue, then I noticed the beer taps. It’s the Booze Mobile from Shorty’s Liquor. Stroke of genius. 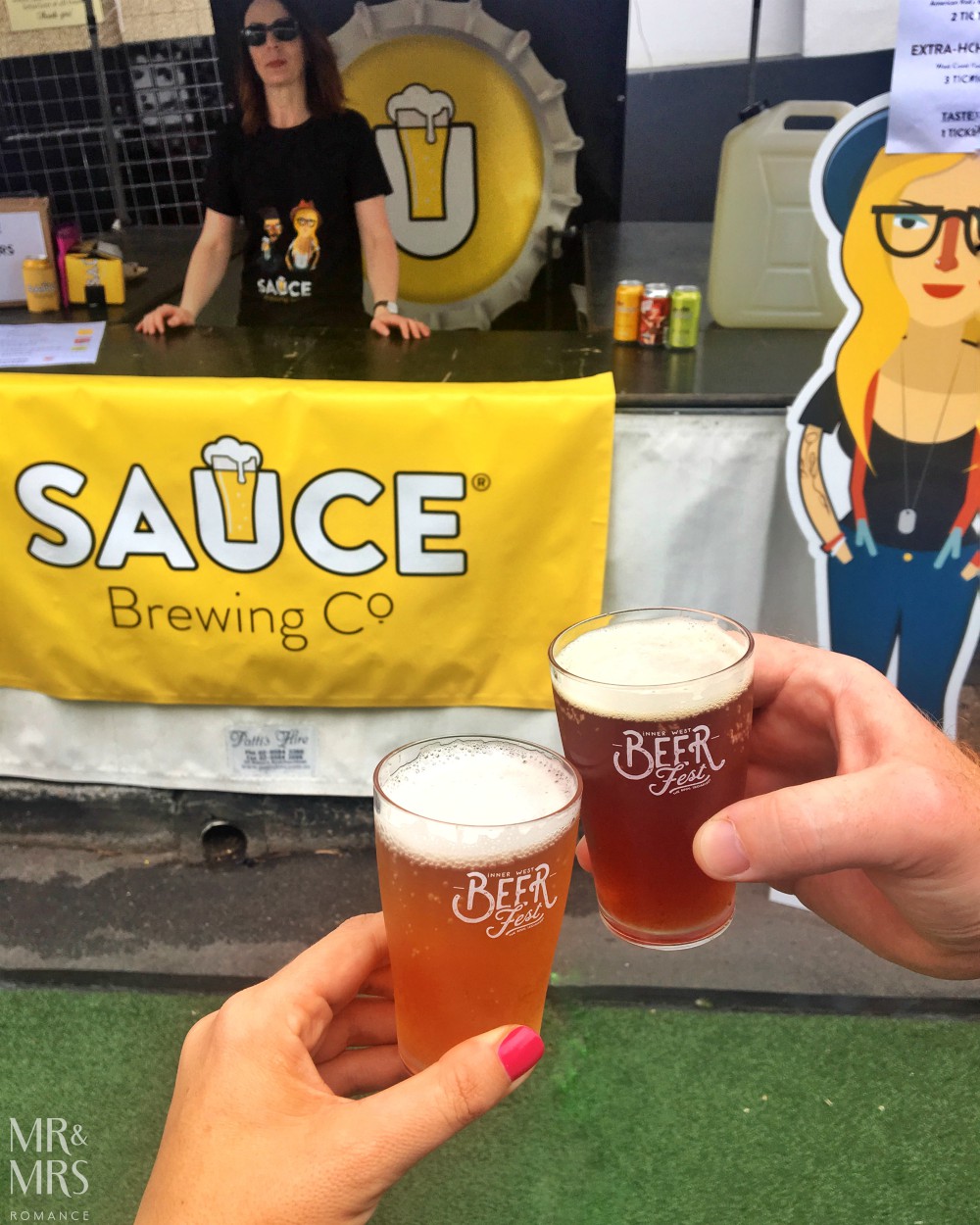 There are so many great beers and breweries from the Inner West here today.

Akasha from Five Dock, Batch Brewery from Marrickville, Young Henry’s from Newtown, Wayward Brewery from Camperdown, Willie the Boatman from St Peters and a personal favourite (perhaps because the we and the brewers are neighbours) is Sauce Brewing, whose brewery is actually in Marrickville. 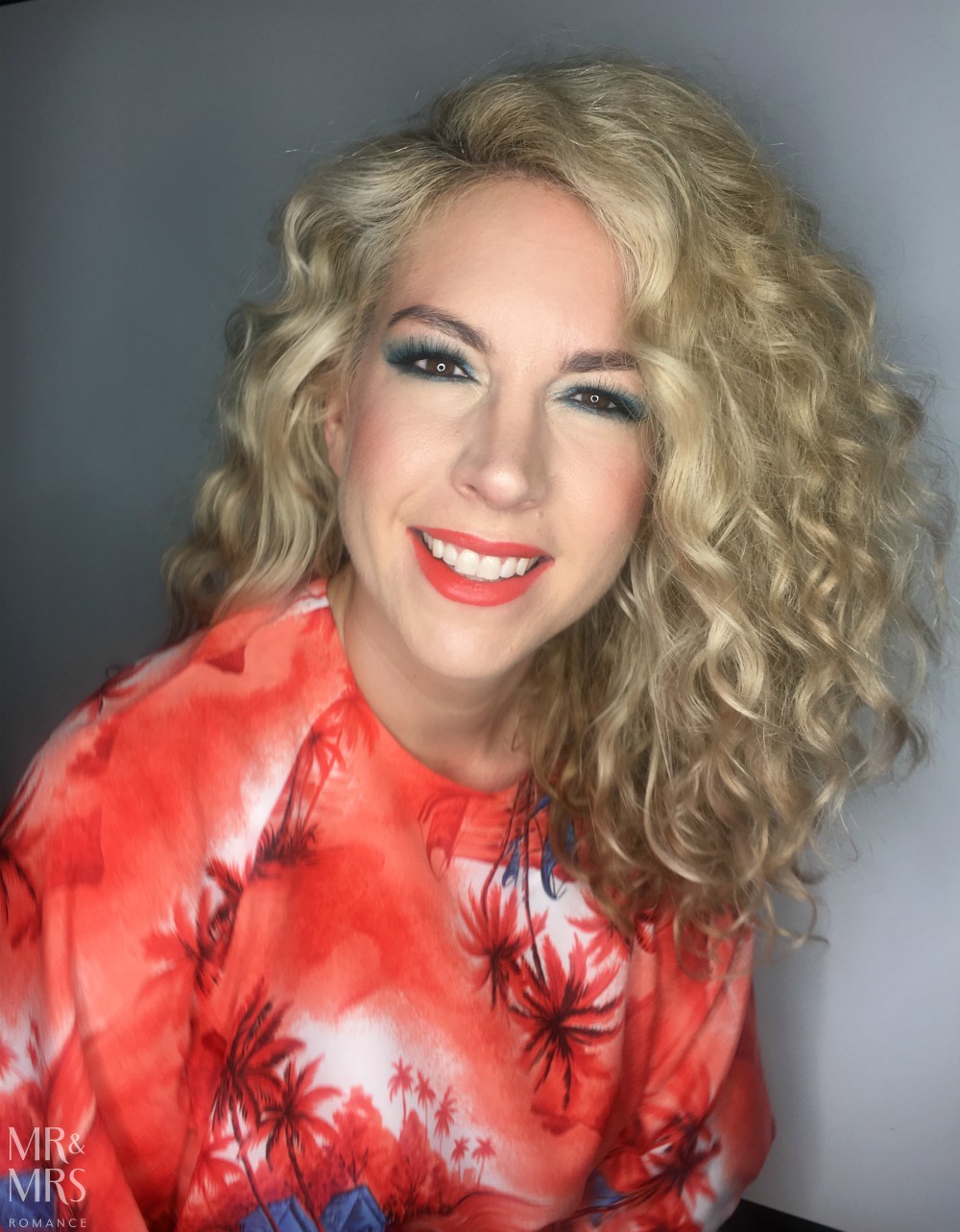 Tonight, we’ve gone ’70s. It’s our friend Jo’s 40th birthday and she’s specified a Soul Train theme for her party. If you’re not sure what Soul Train is, check out this video. 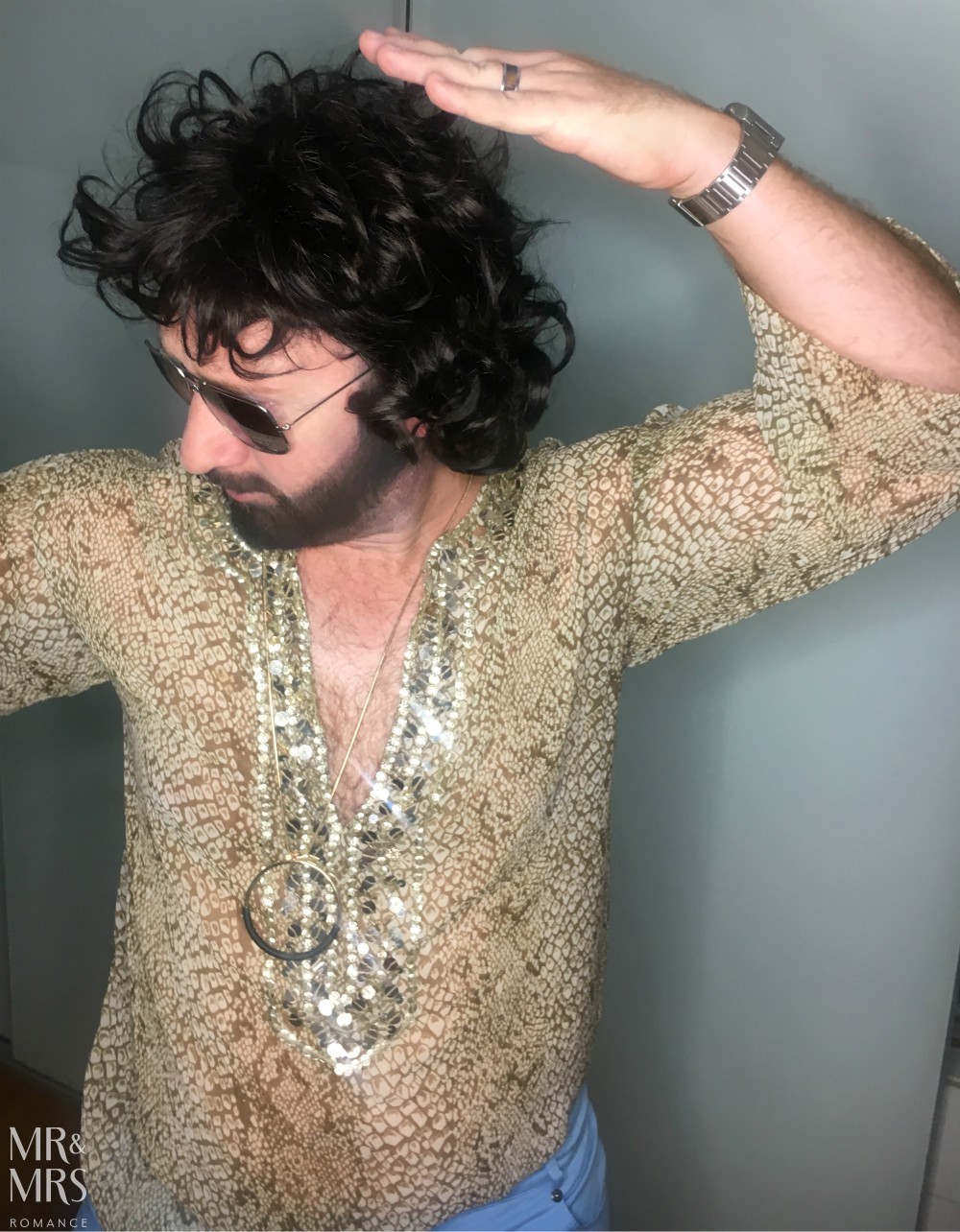 For me, I’ve decided a more eclectic look is suitable. I will be later referred to as “70s Jesus” though I was going for a guru/pornking look.

Either way, when we later walk into the party, no one recognises me. It’s been worth the effort! 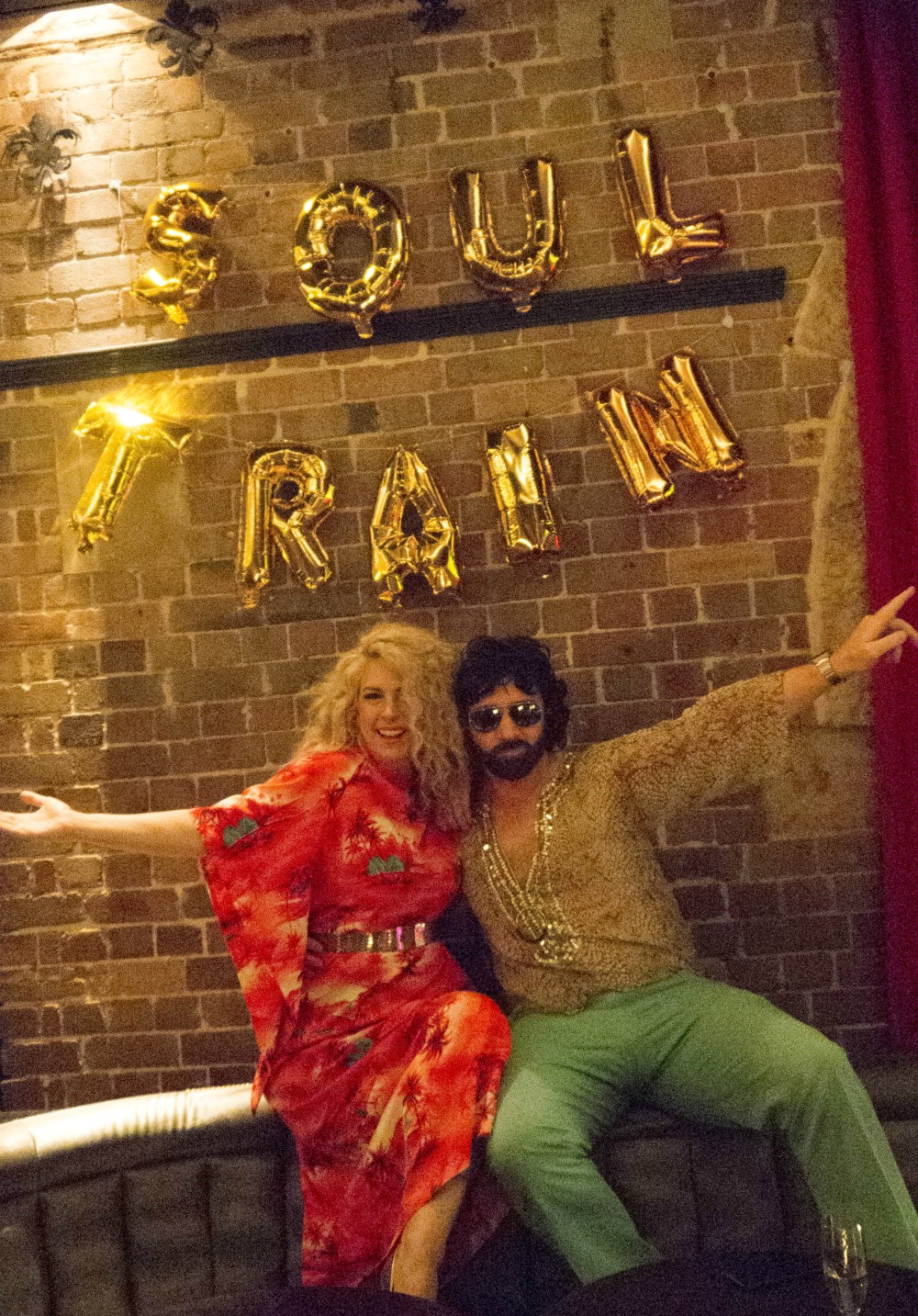 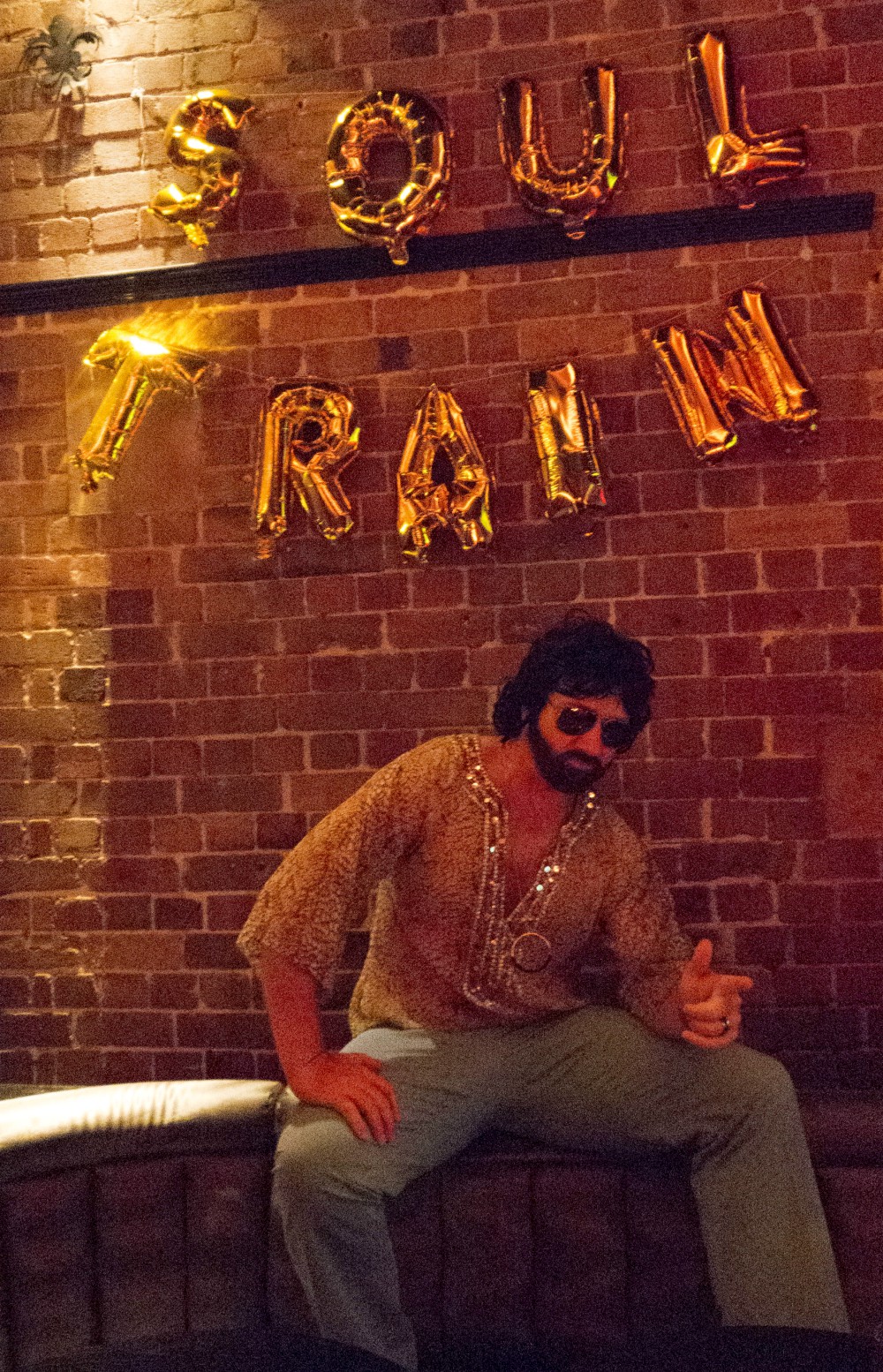 I think I’ve found my new Facebook profile pic. In fact I might even use this one on LinkedIn! 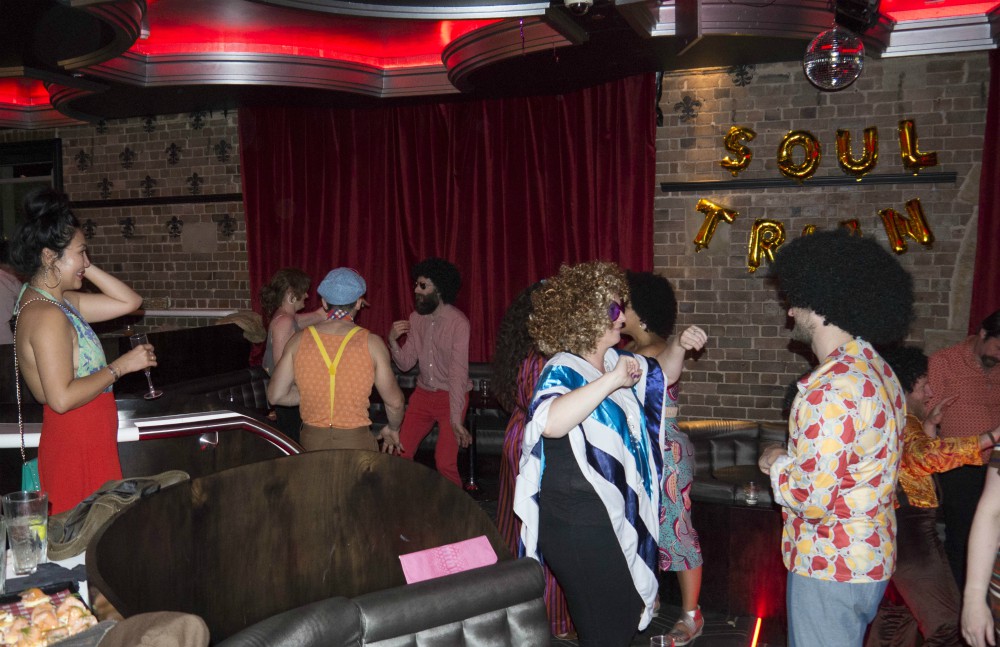 The party is going strong. Jo is having the best time and everyone has made such an effort tonight. Check out the rest of these photos – courtesy of our mate Dean Bentick, who also took our photos at our wedding.

You should check out Dean’s photography company Inlighten Photography by the way. He’s amazing. 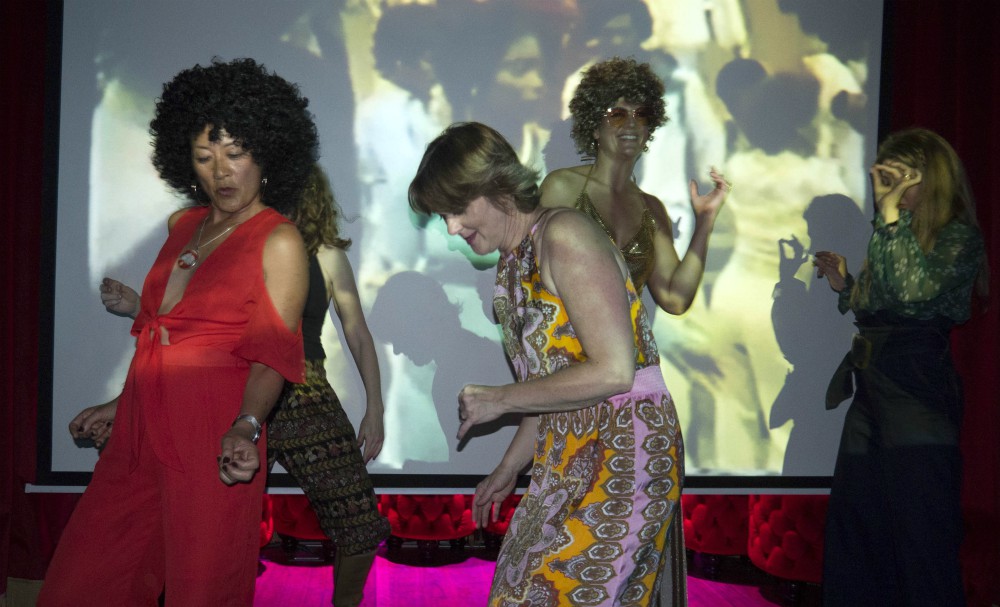 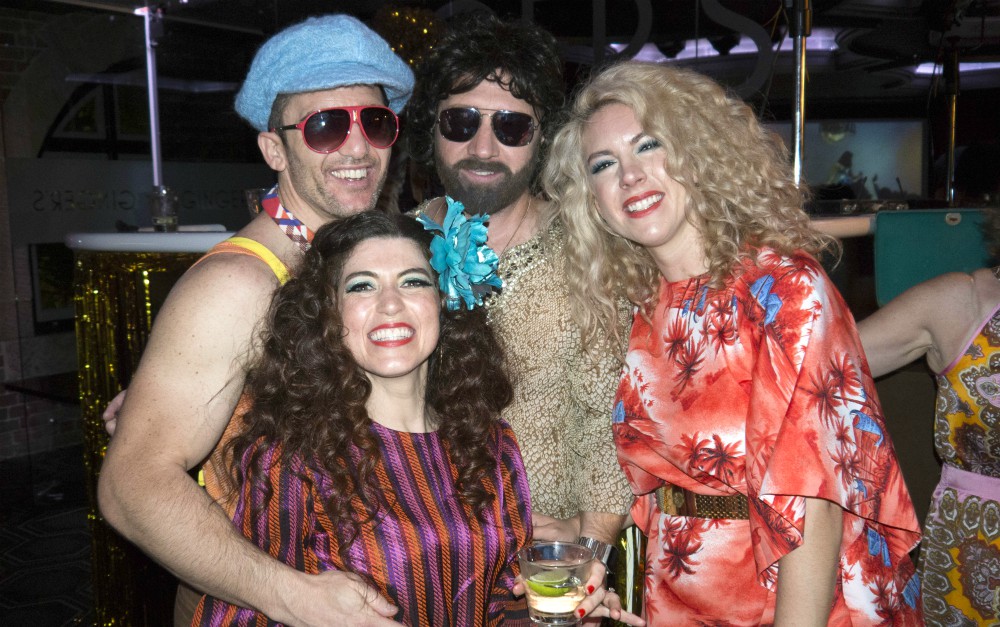 Us and the birthday girl! I have no idea who that bloke is in the blue hat. 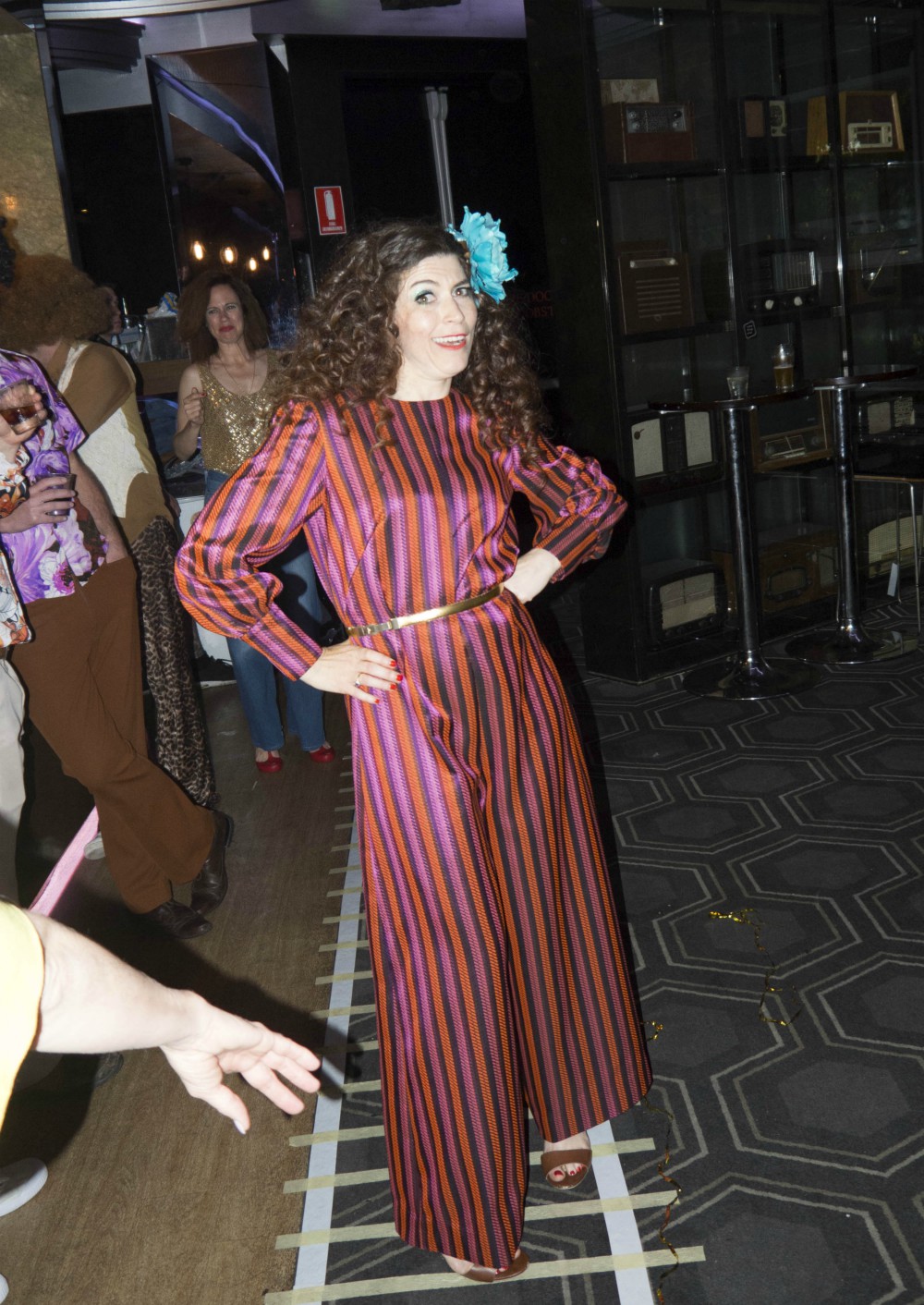 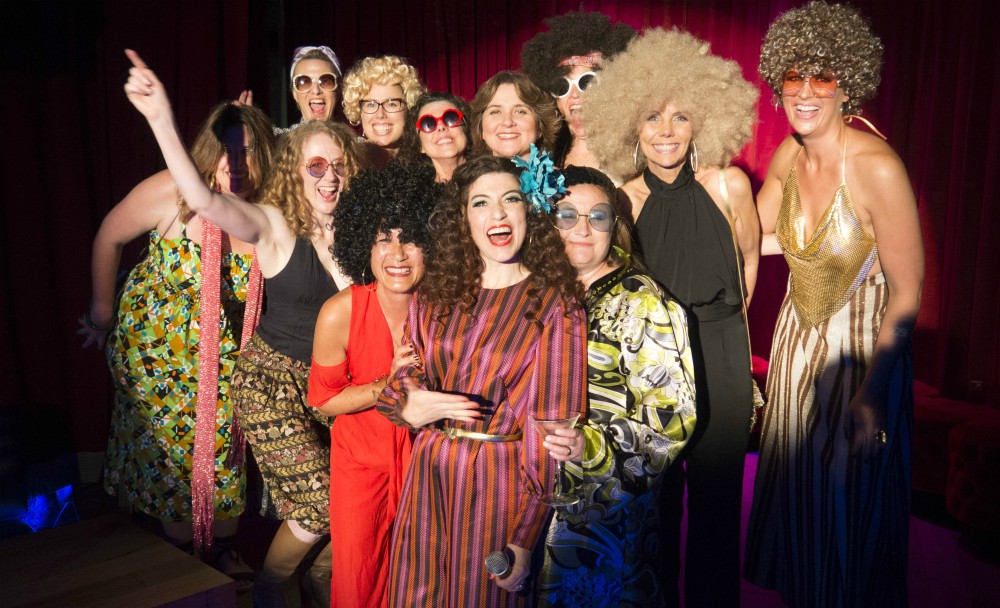 An amazing night and one I hope Jo will cherish.

Thanks again to Dean for sharing his photos. If you’re looking for a photographer for your wedding, event or – in fact – for anything, check out Inlighten Photography. 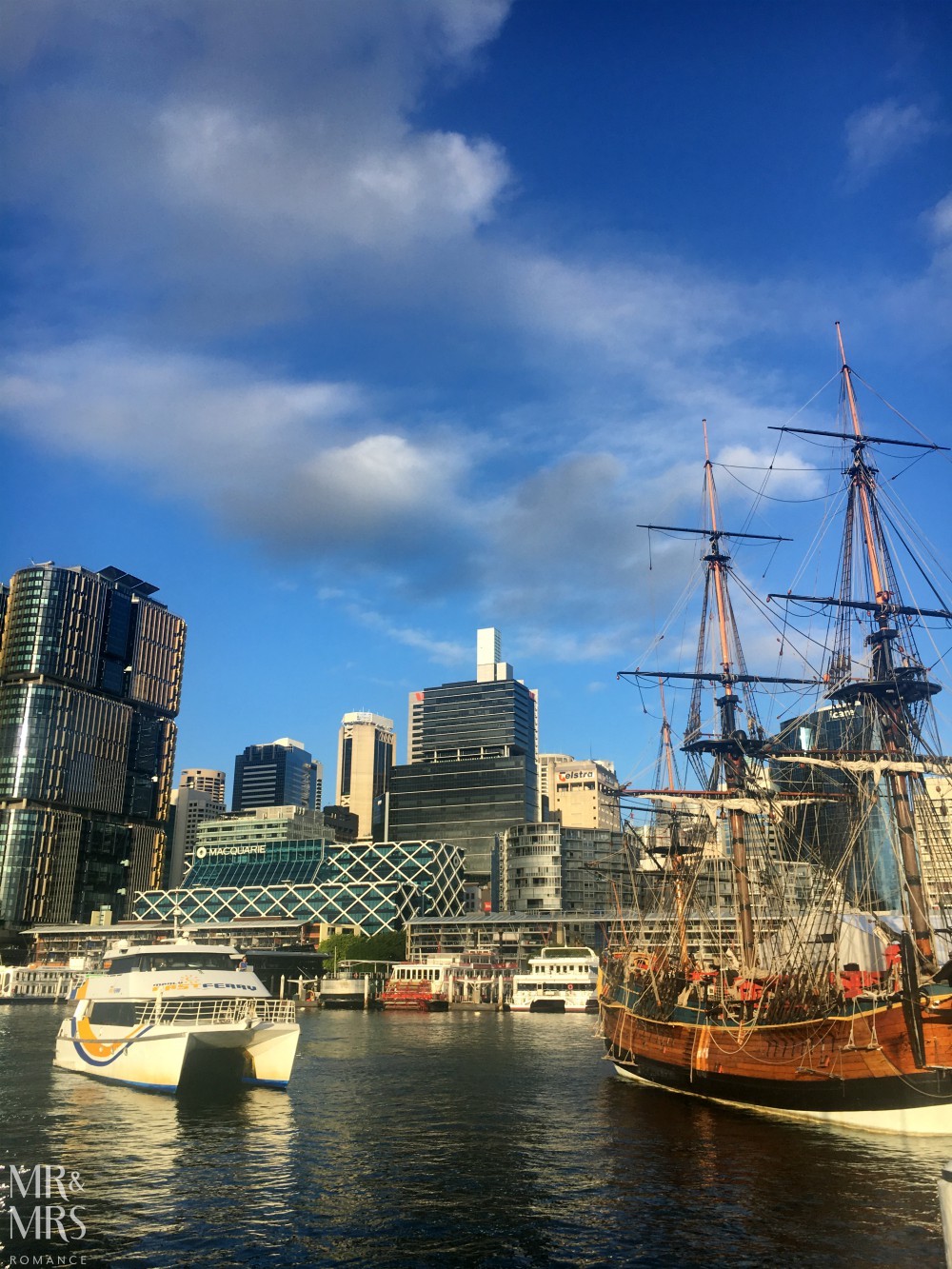 This evening we’re heading to Doltone House in Pyrmont to celebrate the start of Sydney Italian Festival and to experience Italy on a Spoon. It’s a hard life but someone has to go and eat all the food these Italian masterchefs have cooked. 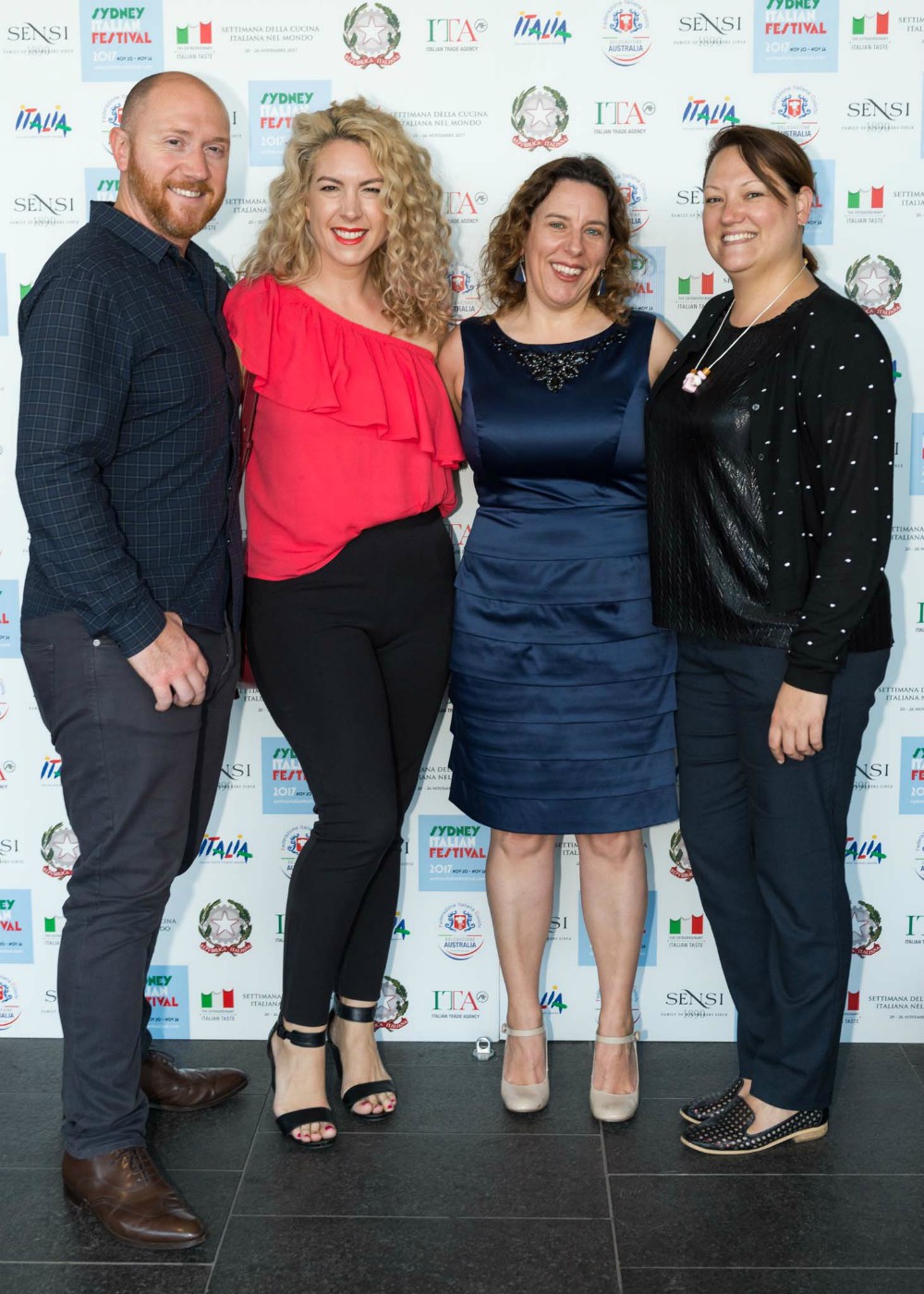 But before we stretch out our clothes, we have a quick photo with the inimitable Holly G, who seems responsible for the majority of our social life these days (glad someone is!), and the lovely Tara from VegeTARAian. 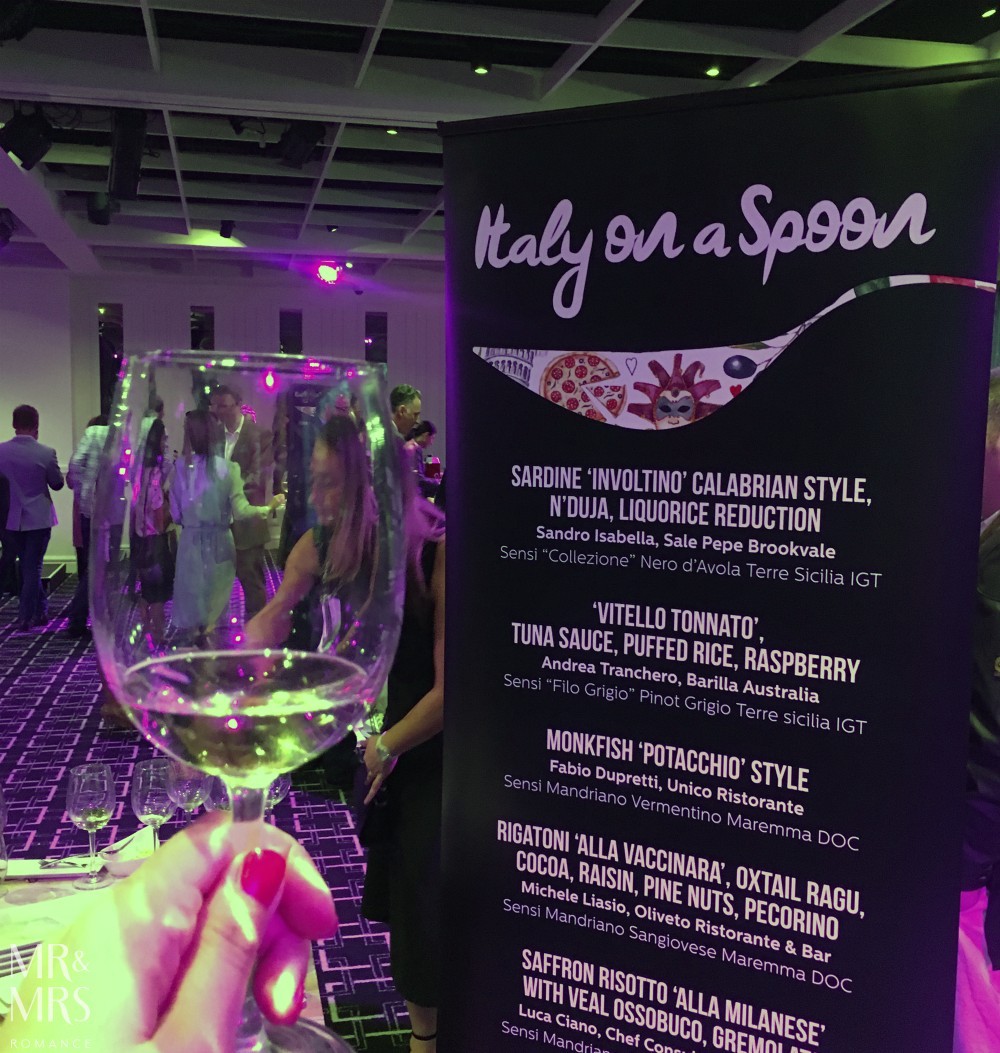 We’re welcomed with a drink and a giant menu – both in stature and in promise. The chefs’ names that go with the dishes are almost as exciting as the food itself. 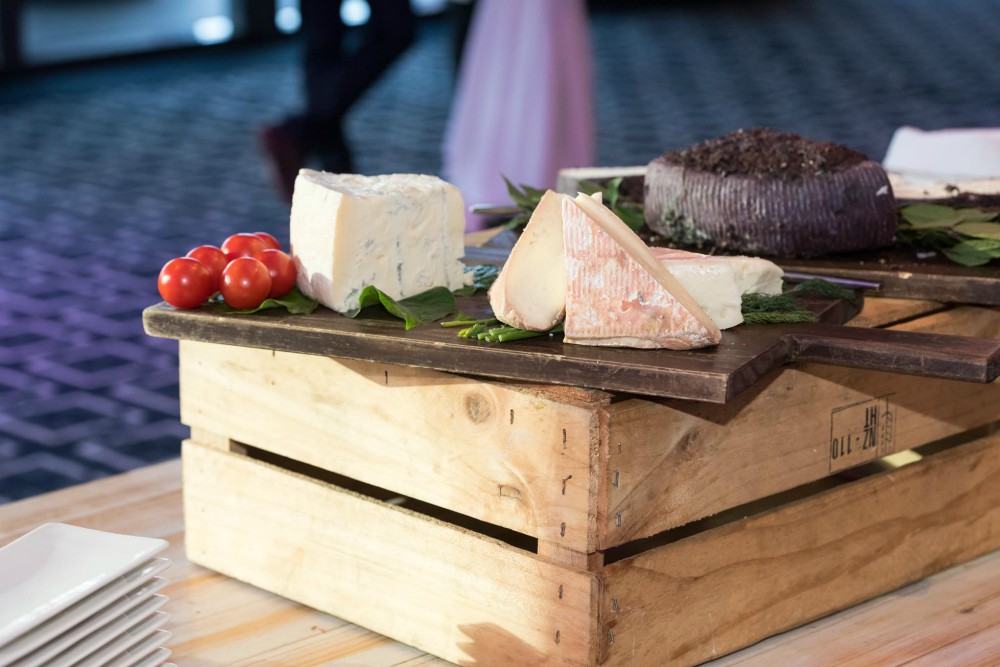 Also before us is another beautiful sight: a cheeseboard that’s about 15 metres long. I’m so impressed. 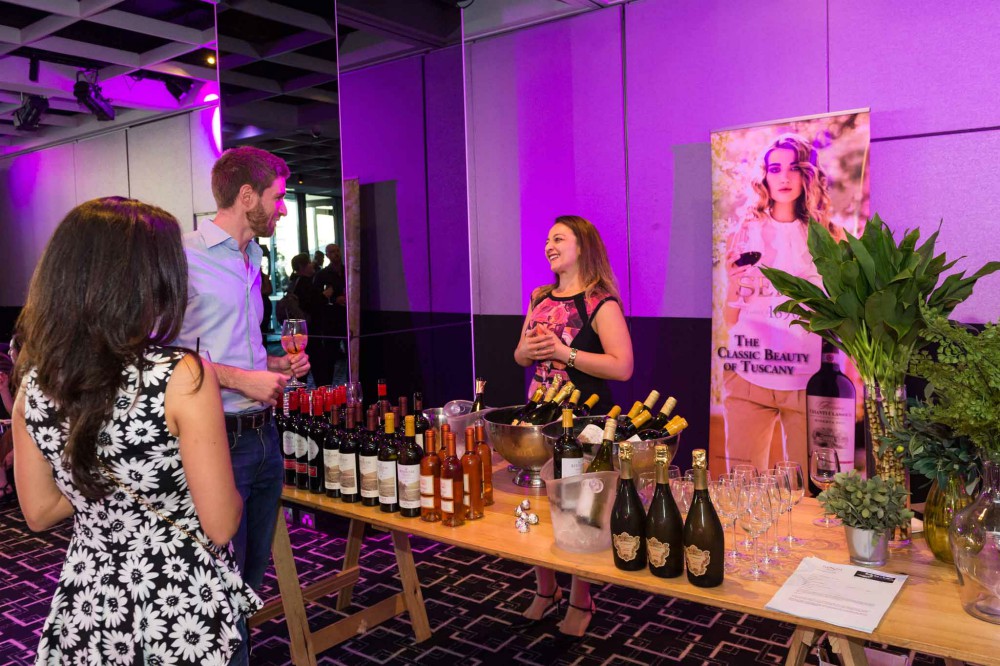 With each of the dishes that comes out, the good people from Direct Wine Cellars, who import some amazing wine here from Sensi Vini in Italy, have matched the wine to the food.

If you’re on the lookout for some great Italian wines that take you straight back to that time you spend in Tuscany, check out DWC. They also have a huge range of other wines, beers and spirits at some excellent prices.

It’s lovely to see Angelica again tonight, who co-owns Direct Wine Cellars. She’s here to talk people through the wine they’re drinking. She’s so passionate about Italian varietals, talking to her makes the experience of drinking these delicious wines even better. 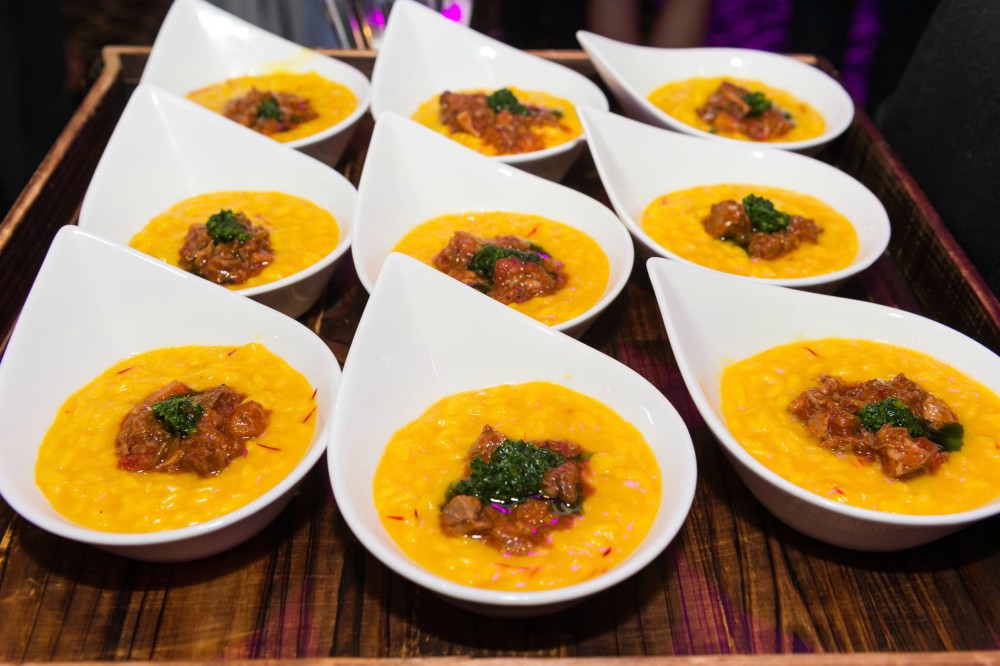 One of our favourite dishes of the night: the saffron risotto ‘alla Milanese’ with veal ossobuco. It’s by Chef Luca Ciano, who we’ve met a few times before – most recently at the Italian Festival in Leichhardt and at Festival of Nonna.

Luca is from Milan, so we’re expecting a lot with this dish. Risotto is the Milanese specialty after all.

Later we ask Luca about the rice he used, because we could tell it wasn’t the usual arborio we usually cook with. He explained it was a special aged carnaroli rice. We’re going to give it a go for sure. Looks like you can buy it at Harris Farm. 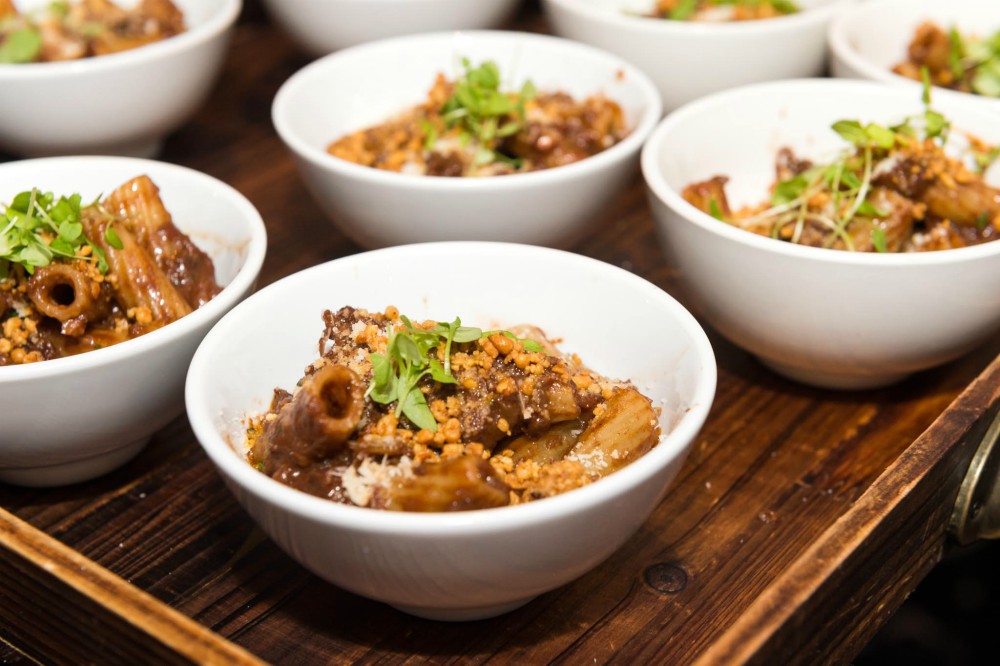 Another favourite is the rigatoni with oxtail ragu, cocoa, pine nuts and pecorino. Rich, satisfying and deeply flavourful. 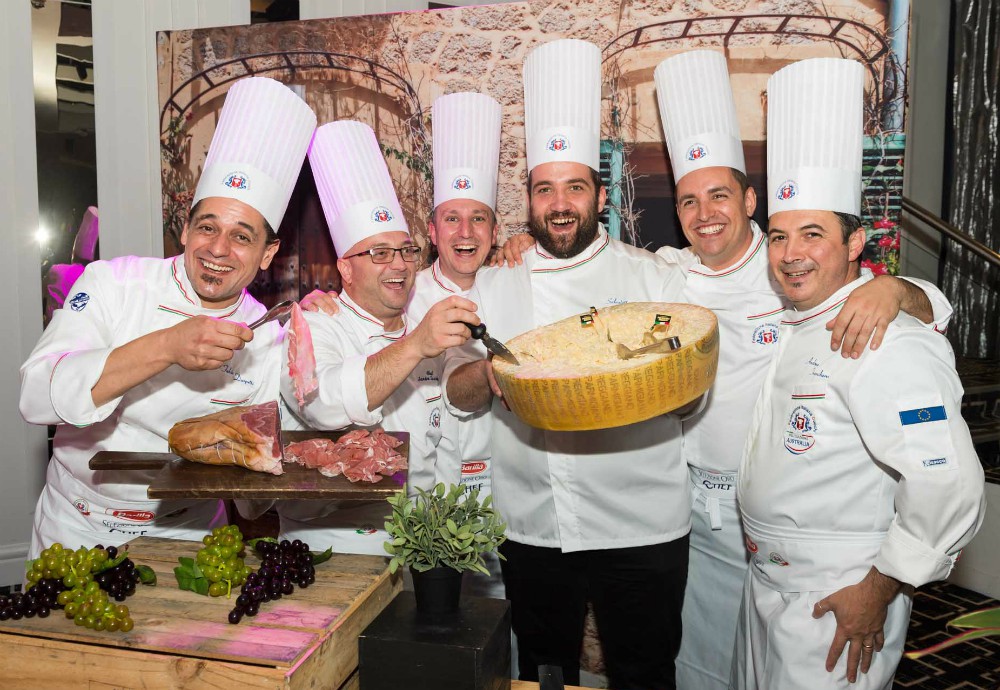 We leave you with a photo of all the chefs together. It’s a lot of fun seeing them all having fun and talking about their different dishes and the regions of Italy they’re all from.

It’s a special evening and a great start to the Sydney Italian Festival, which coincides with World Week of Italian Cuisine – a festival that’s celebrated yearly in 105 countries.

We hope you’ve enjoyed this IG Edition. Chat to you again soon.

We travel in troubling times. The outbreak of the coronavirus COVID-19 has everyone in a scramble. It’s easy to get caught up in the…