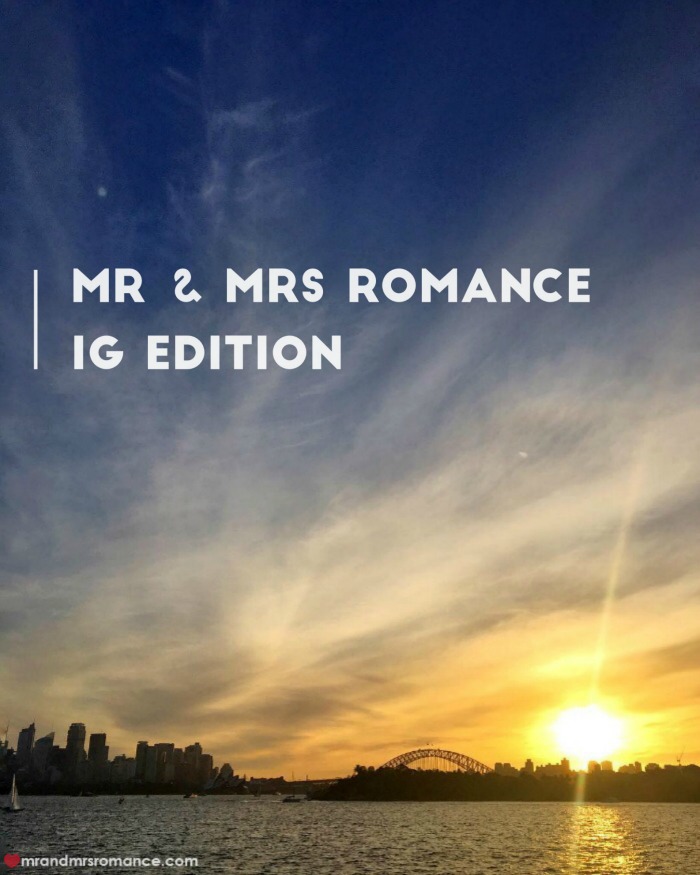 We’ve been enjoying a whole string of short weeks here in Australia. Easter might seem like a lifetime ago, but here in Oz and New Zealand we also have Anzac Day. It’s a public holiday that celebrates and remembers our braved servicemen and women who have sacrificed their lives for our liberty over the years.

It’s a sad day, but also a happy one with lots of traditional Aussie celebrations like Two Up – plus everyone gets a day off work!
It’s also coming up to winter here in Australia, so there’s plenty of motivation to eat. For that reason, we’re excited to tell you about a couple of awesome restaurant experiences we’ve had recently… so let’s get started on this week’s IG Edition! 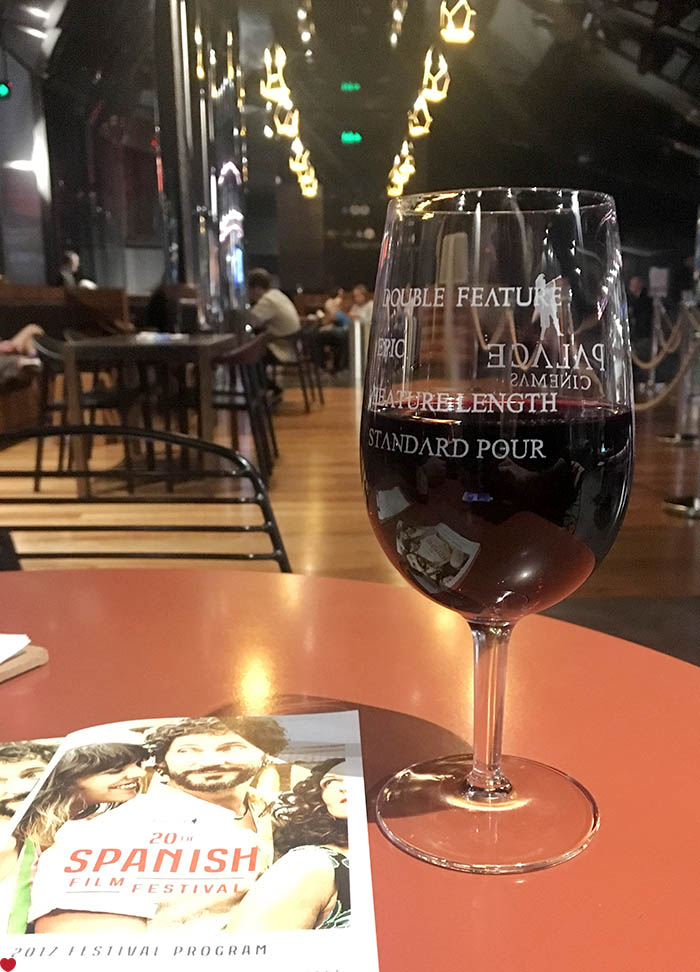 This evening Mrs Romance and I are out on a date night at the cinema. We love coming to the Palace on Norton Street, Leichhardt for a few reasons.

It’s never too busy (even tonight on the Saturday of the Easter weekend), there’s a full bar and you’re allowed to take your drinks to the screen, and it feels a bit more like you’re part of the neighbourhood than going to the big cinema groups.

The measures on the wine glasses here are also quite a novelty – you can have a standard pour or a ‘feature length’ size drink. They also serve ‘epic’ glasses of wine and if you’re feeling really thirsty you can have a ‘double feature’. But I think that would probably be a whole bottle!

By the way, we’re not here to see any of the Spanish Film Festival movies – we just put that in the photo to look a bit more sophisticated! 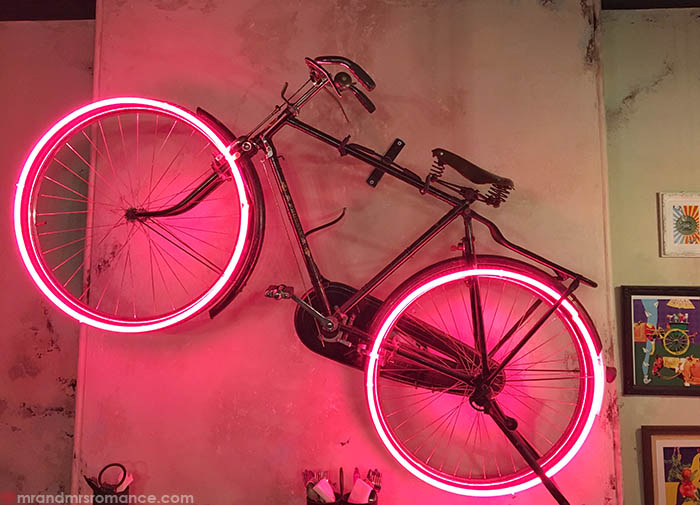 Tonight we’re excited to be going to a new Indian restaurant that’s recently opened in Sydney. This is Masala Theory in Surry Hills and it’s a curry house with a difference.

For a start, instead of the traditional décor you find in Indian Restaurants, these guys have embraced the hipster styling of the suburb – we love the pop art, the funky bike and the perfectly chipped paint on the walls. 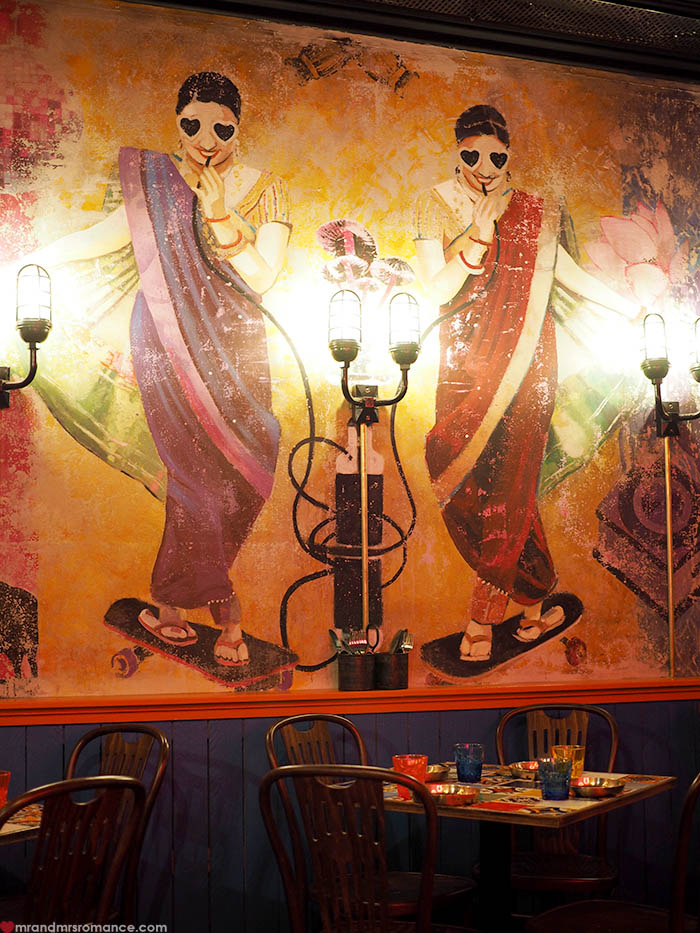 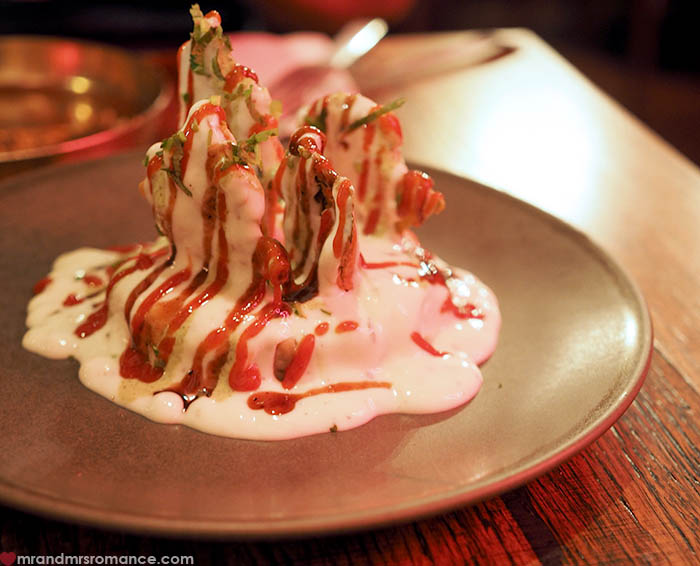 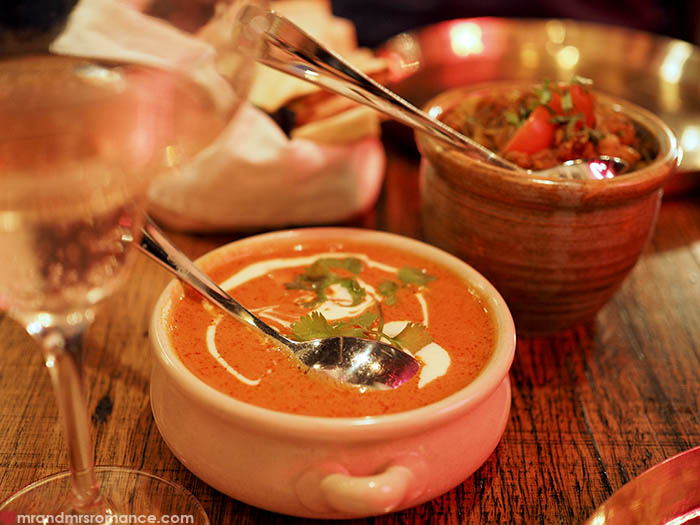 As for the menu, it’s as cool and refurbished as the rest of the concept of this place. You won’t find the usual balti, rogan josh or vindaloo here, and the butter chicken isn’t like the butter chicken you’re likely to find in most other Indian restaurants.

There are some amazing dishes I haven’t heard of before and some that are classics yet done slightly differently and with a whole new flavour profile.

Oh and their cheese and coriander naan breads are insane! 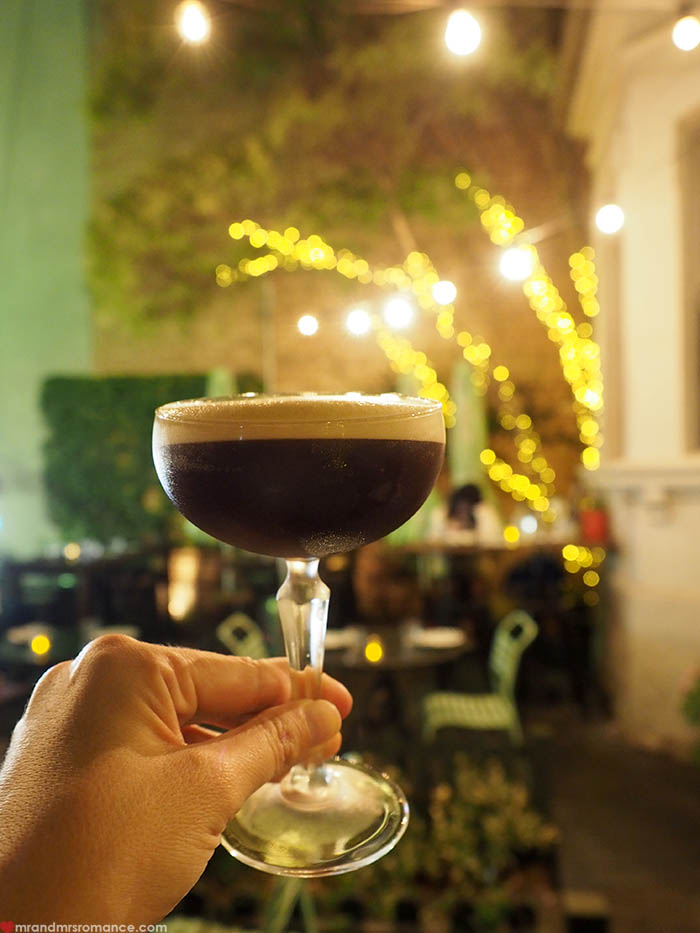 Tonight, Mrs Romance and I and our dear friend Anton are heading to an old favourite for dinner. It’s been a while since any of us have visited The Cottage in Balmain, but we’re excited about being invited to try their new menu.

The Cottage has a new head chef – Adam McCaughey, who has come to them from Rockpool and Noma. Two restaurants with incredible names in the industry and this chef’s experience certainly speaks to you through the food that’s coming out.

The extra bonus of getting here on a Thursday evening: decadent espresso martinis at only $10 a pop! 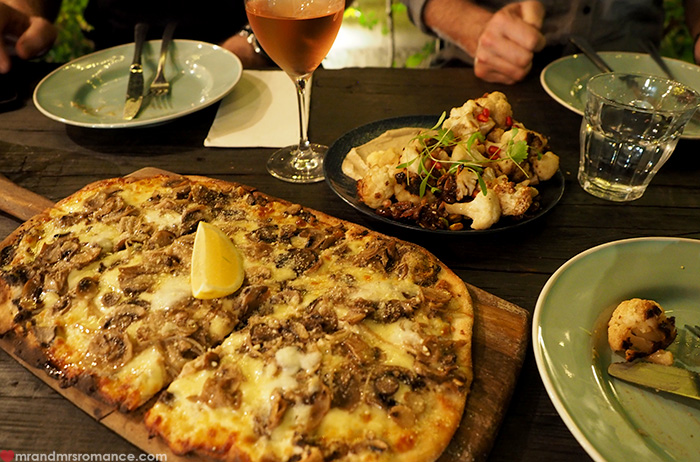 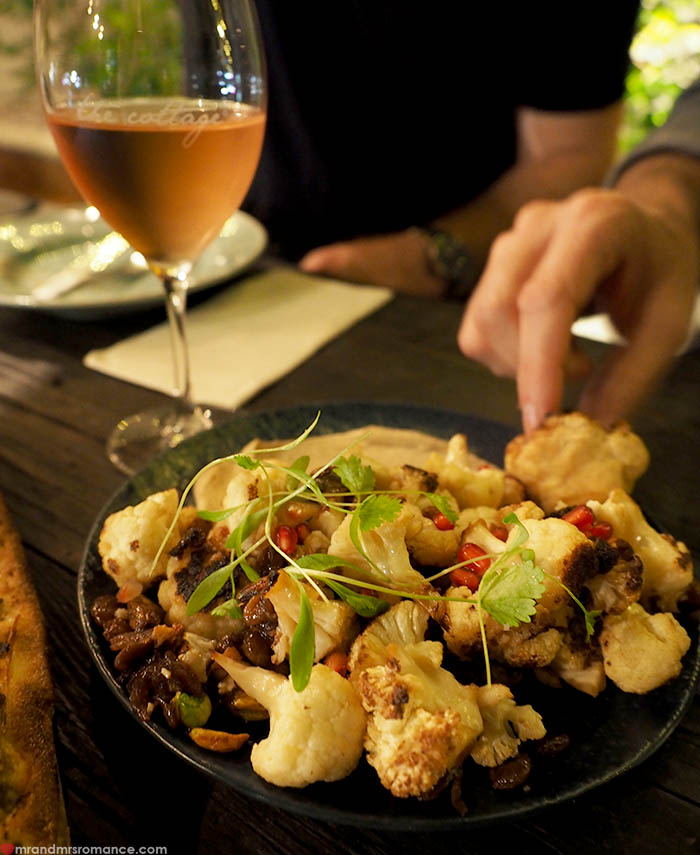 There are lots of the old favourites still there on the new menu, but even they have had a bit of a workout at the gym and a facelift.
The pizzas are so wholesome and filling – this is the Fun Guy, which has a field mushroom paste as a base, a range of forest mushrooms on top and just the perfect amount of truffle oil on top (nothing worse than being truffled out!).

Another Cottage classic is their roast cauliflower, but this version is just so much more mature in its make-up. The flavours are rounded and moreish, and the plating shows that extra attention to detail McCaughey brings to the table. 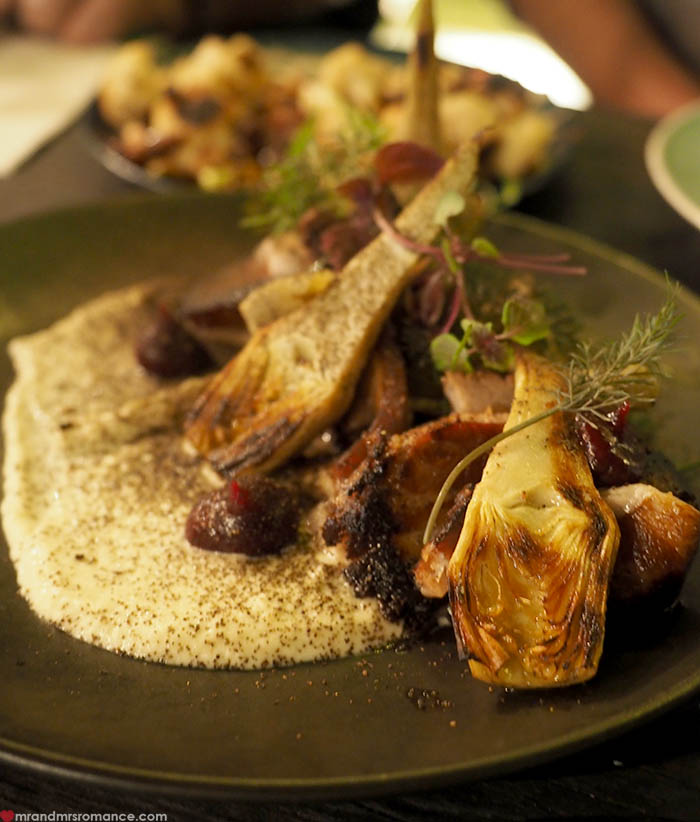 However, the crispy pork belly really won us all over. Instead of coming in blocks as it usually does, this pork belly, which has clearly been slow-roasted for a long time, has been sliced thinly almost like bacon or speck.

The combination of the confit artichokes, and the celeriac and vanilla puree make for a special dish indeed.

You’ll be able to read more about these two special venues (and three others we’ve got planned) in our upcoming 5 Foodie Finds post next week, so keep your eye open for that!

If you haven’t already, sign up to our free weekly e-zine where I email you details and links of any recent posts we’ve published to save you having to search our site all the time for new stuff. 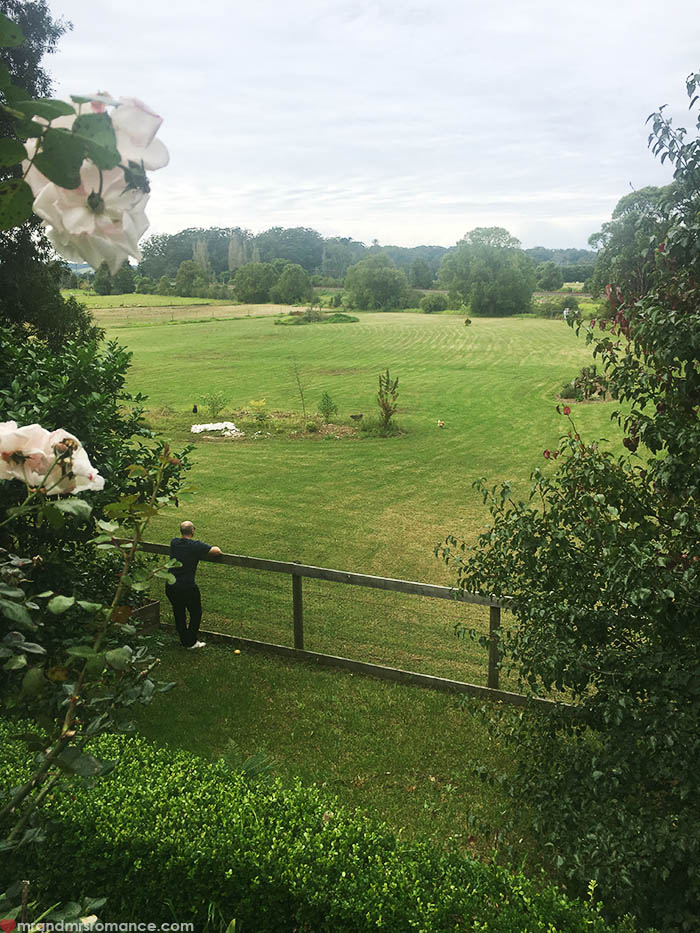 It’s an exciting weekend for us – we’re off to a family wedding that’s been on the cards for so long, no one ever thought it’d happen.

Our sister-in-law is finally marrying her man after 20 years of being together. In truth I think it’s just an excuse for them to have a big party – and why not – but it doesn’t detract from this romantic and lovely moment. 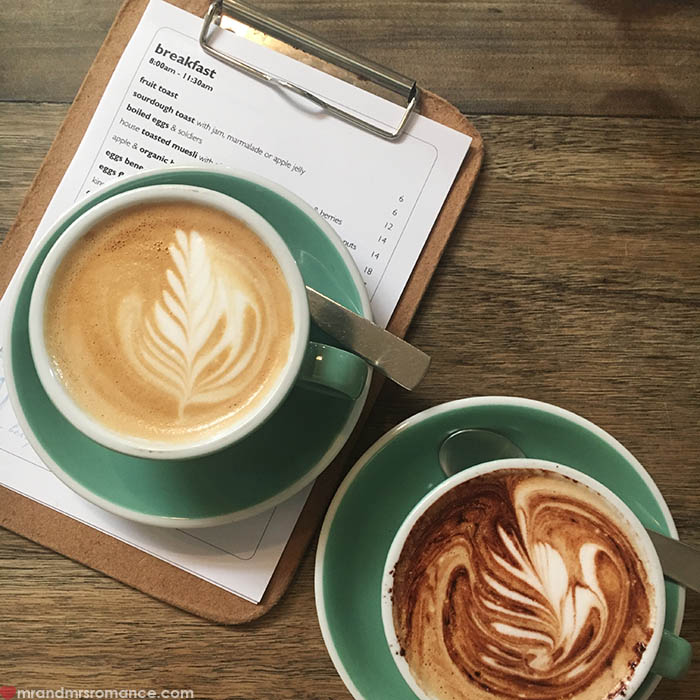 He’s from a little country town south of Sydney called Berry, so we’re all down in the South Coast to celebrate with them. Berry’s well known for its picturesque streets and shops, and some amazing food options too.

There’s pretty much a gourmet pie shop on every corner of its main street and several more between each corner too! It’s like I’m in heaven. 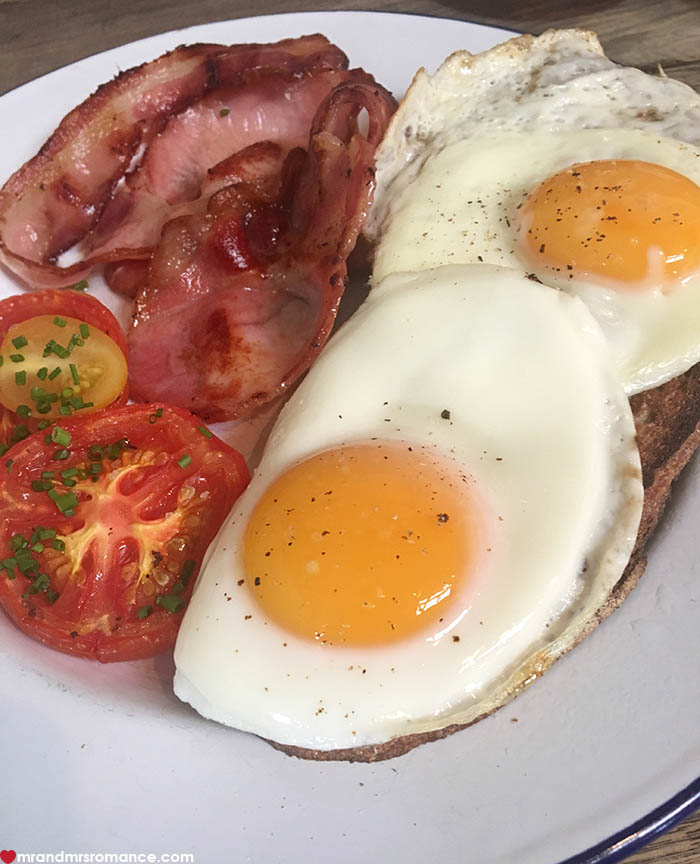 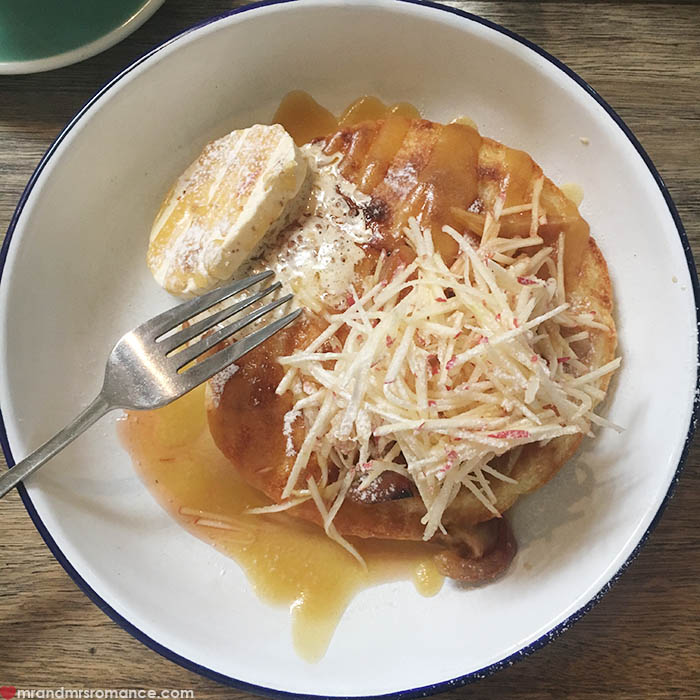 Even better, these bakeries often double up as cafés, so breakfast options here in Berry are kind of overwhelming.

We’re enjoying a hearty brekky at the Berry Sourdough Cafe and Bakery, which also has a bit of a reputation with the discerning locals of having the best coffee too.

My smoked bacon and fried eggs (on sourdough toast of course) is superb. Mrs Romance’s special of crumpet and honeycomb butter is pretty full on, but worth the inevitable sugar crash. 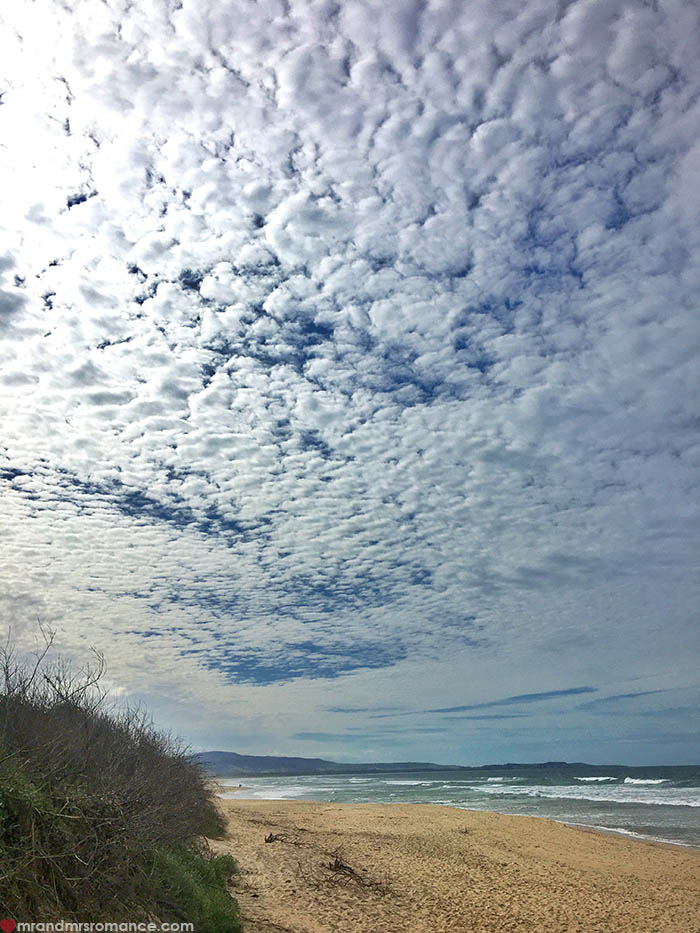 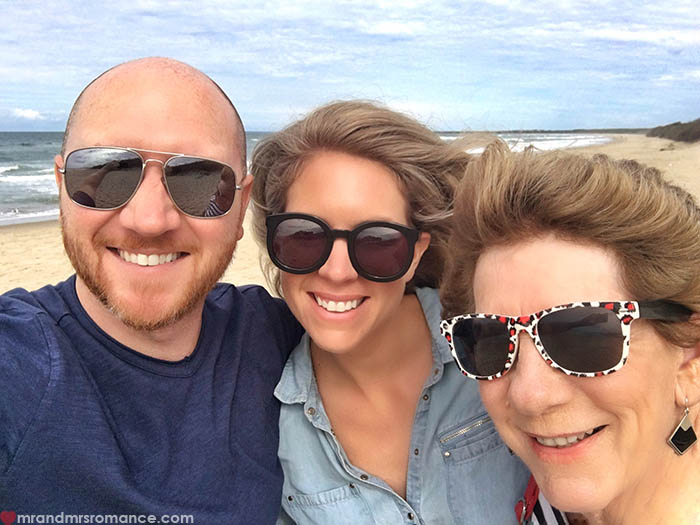 Berry’s not far from the beach – and the coast in this area is known for its beauty. Mrs Romance, her mum Jeanette and I have taken a quick drive to come and check out one of the beaches here in a quiet moment.

This is Seven Mile Beach, which stretches from Gerroa in the north all the way down to Shoalhaven in the south. It’s absolutely stunning. 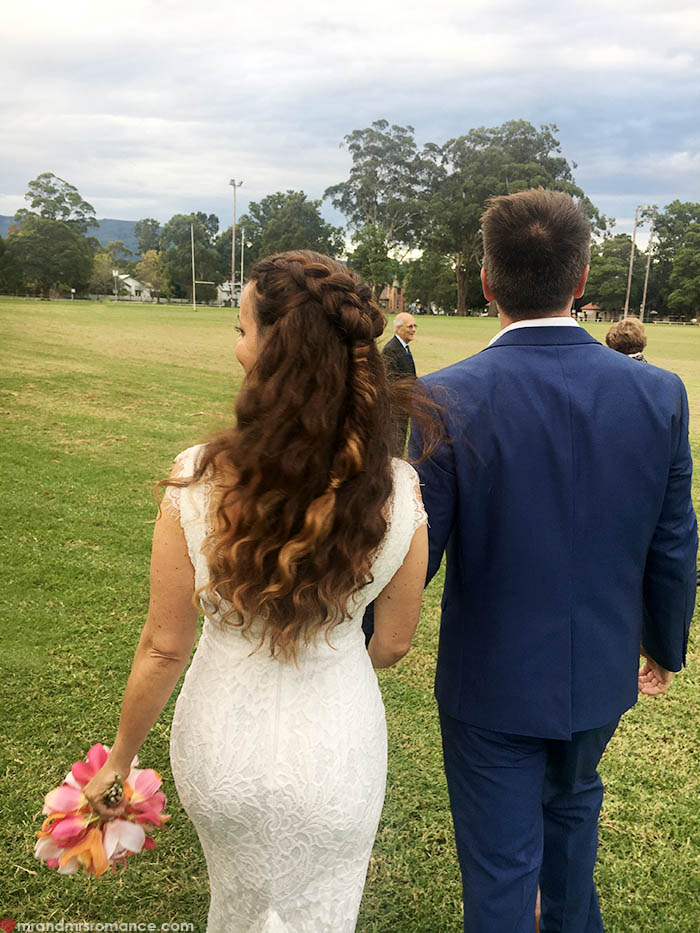 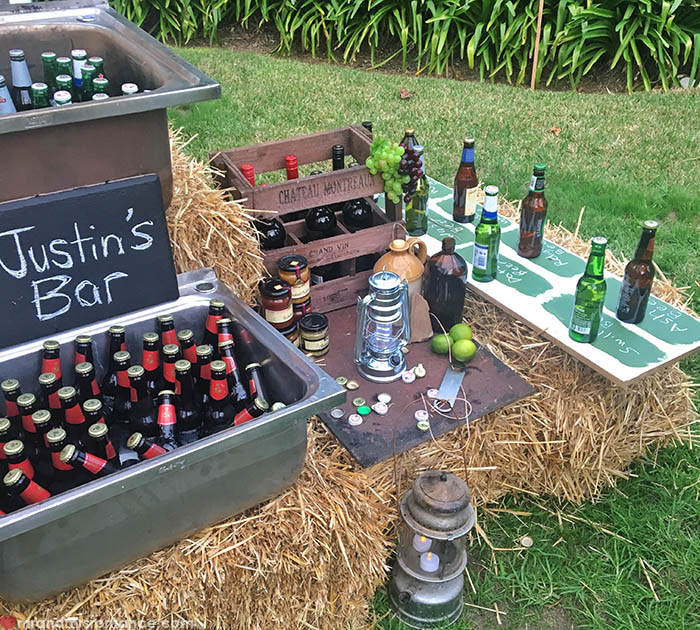 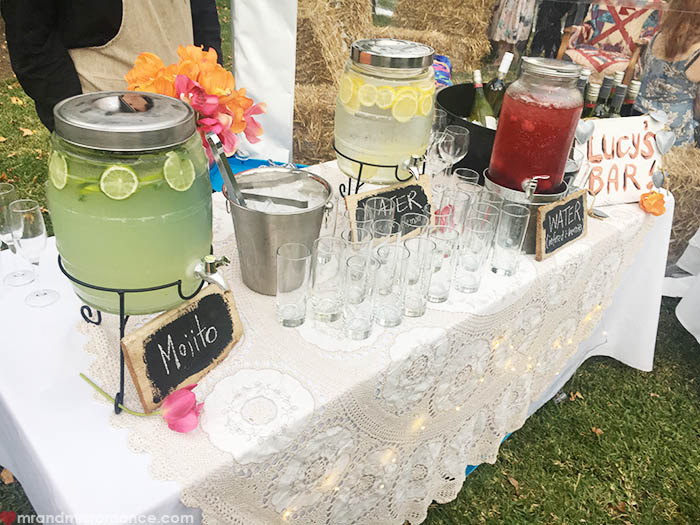 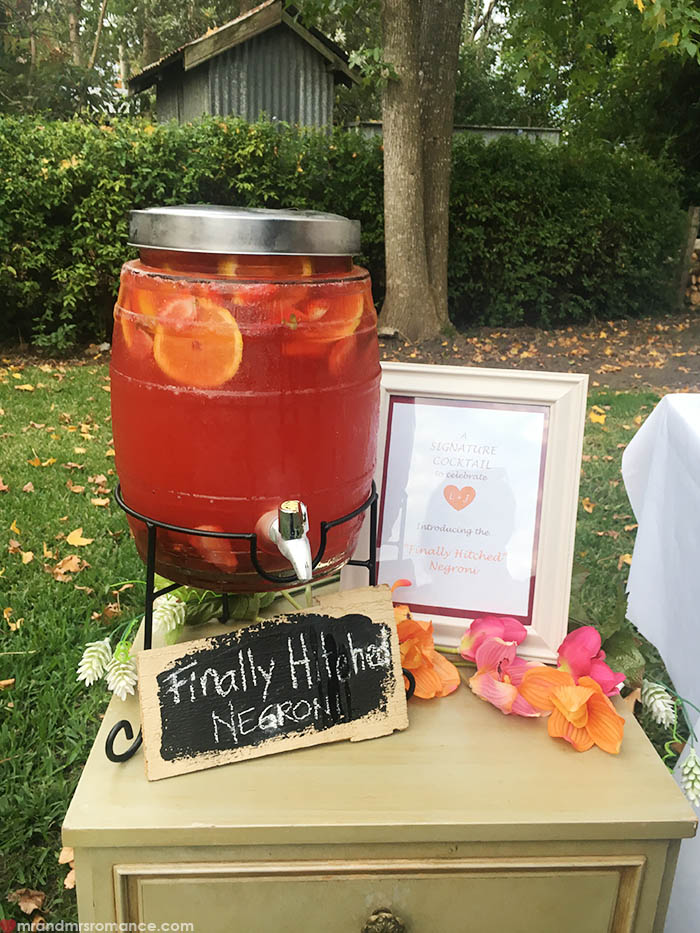 The wedding itself is stunning. The ceremony is being held on the stand of the town’s sports field, which is such a beautiful unexpected location.

The reception party is in the family home down the street and they’ve done such a beautiful job decorating the garden and setting it all up. There’s even a mobile woodfired pizza oven here!

It’s a lovely way to spend the weekend – made even better by the promise of another 4-day week to help with recovery! 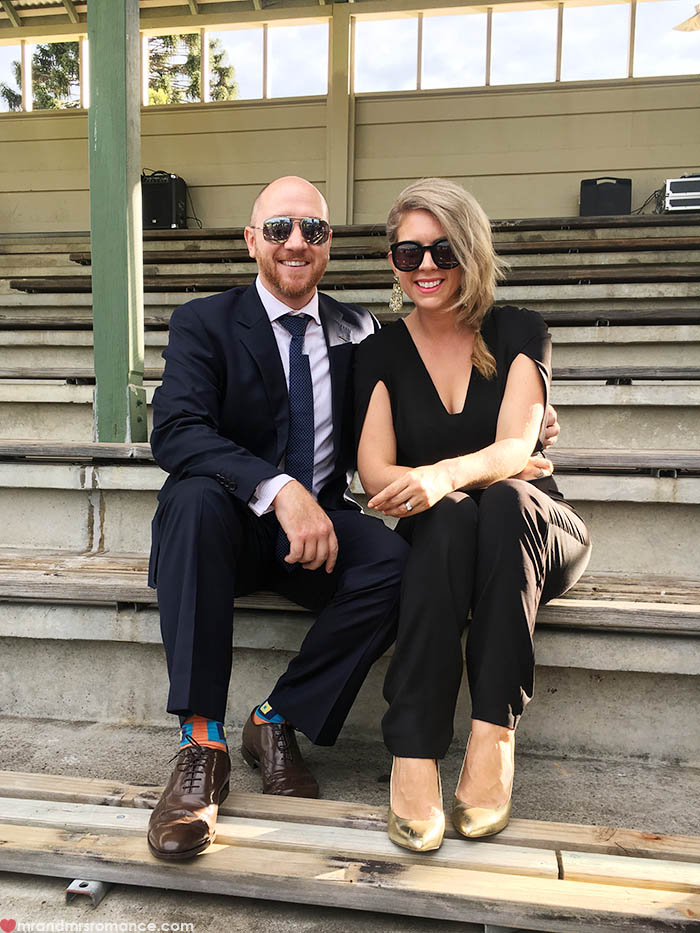 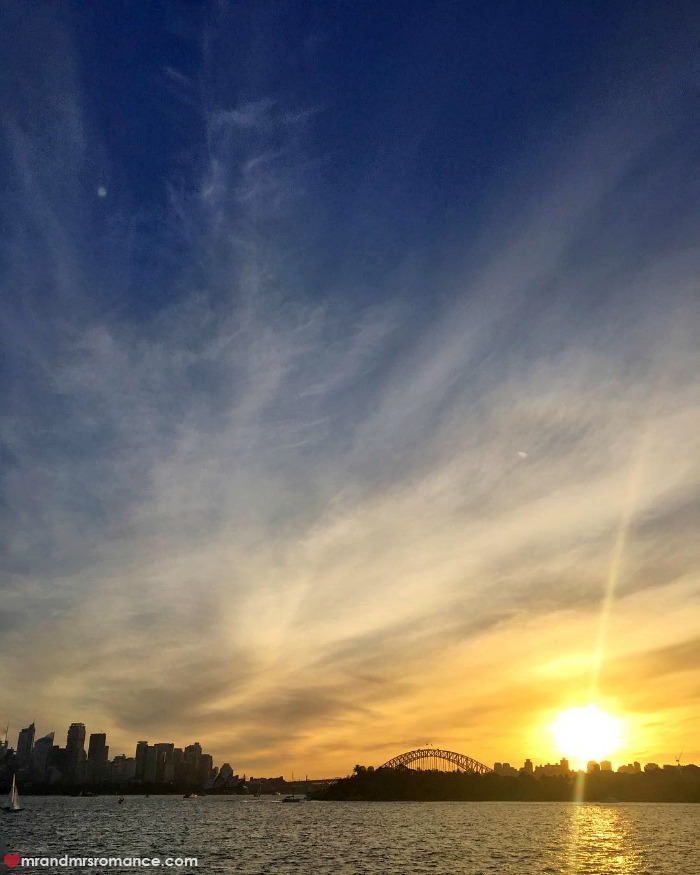 We started a mini series of Sydney Harbour recently. Here’s one of the first – a stunning sunset we saw a little while ago while we were on the ferry to see a friend in Mosman north of the city.

It always surprises us how many different angles you can see the Harbour Bridge from. And all of them beautiful! 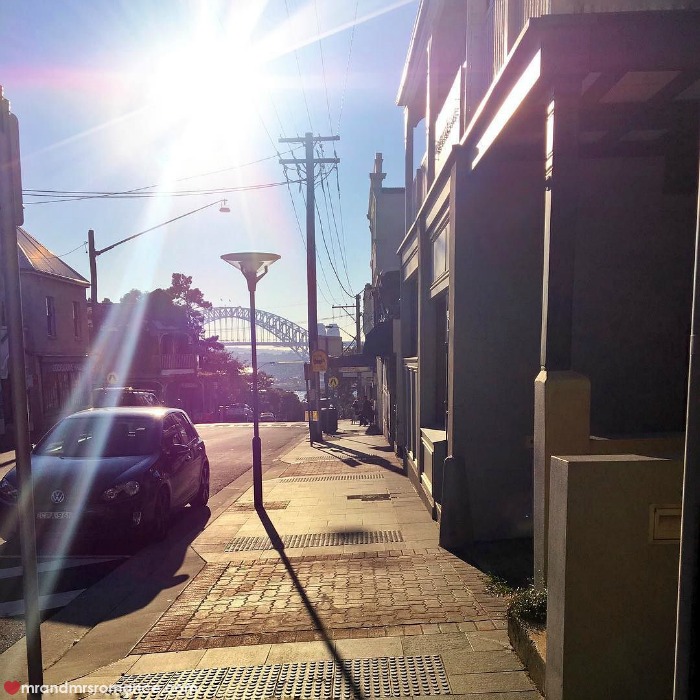 From Balmain you can see the western side of the Harbour Bridge. At the right time of day – usually quite early in the morning – you get to see the sun rising up behind the bridge from here. 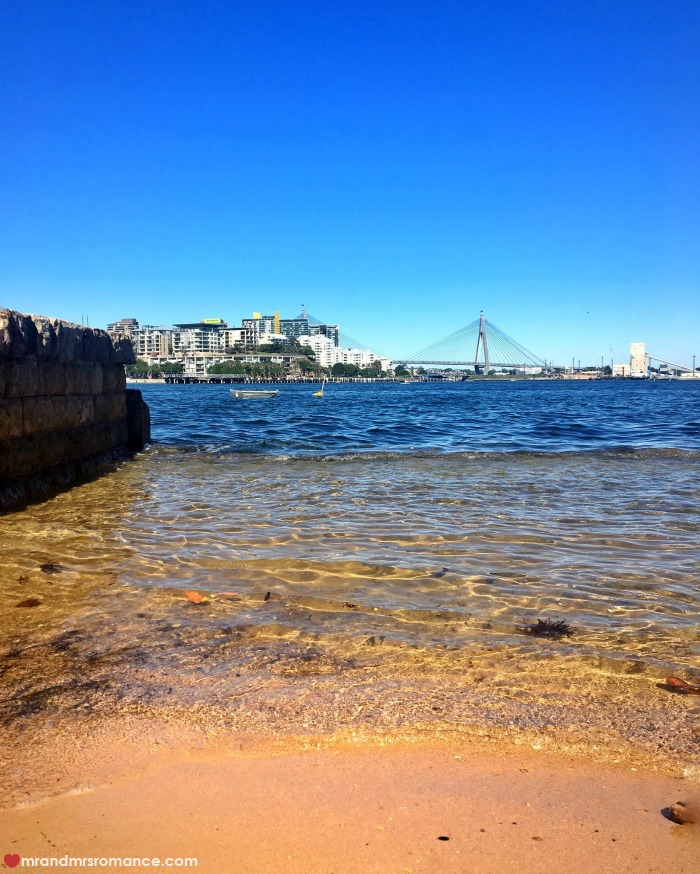 Sydney Harbour always seems to surprise us with new little finds. Mrs Romance and I have been exploring the waterfront for years now and didn’t know this little beach was even here. It’s really tiny – and even disappears at high tide – but it’s so pretty. This is also in Balmain. 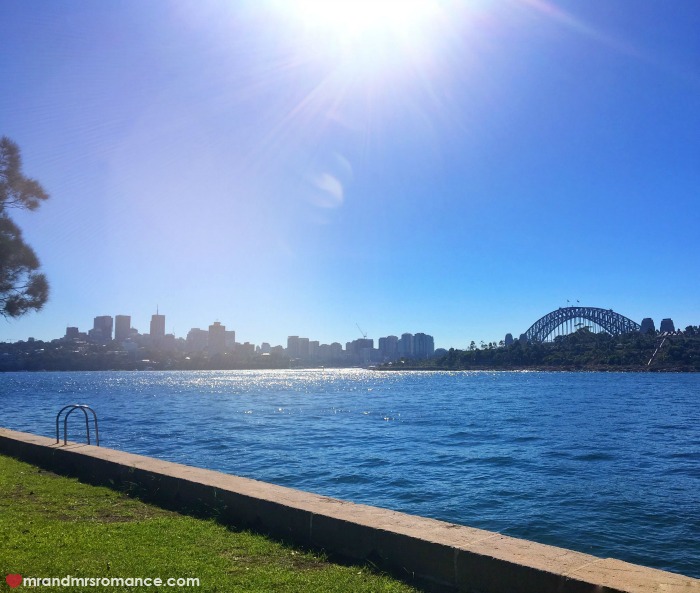 The water can really sparkle on Sydney Harbour at times. It’s part of what makes it so lovely to live in this city. I sometimes wonder what it’d be like to live here without the harbour. Hard to imagine. 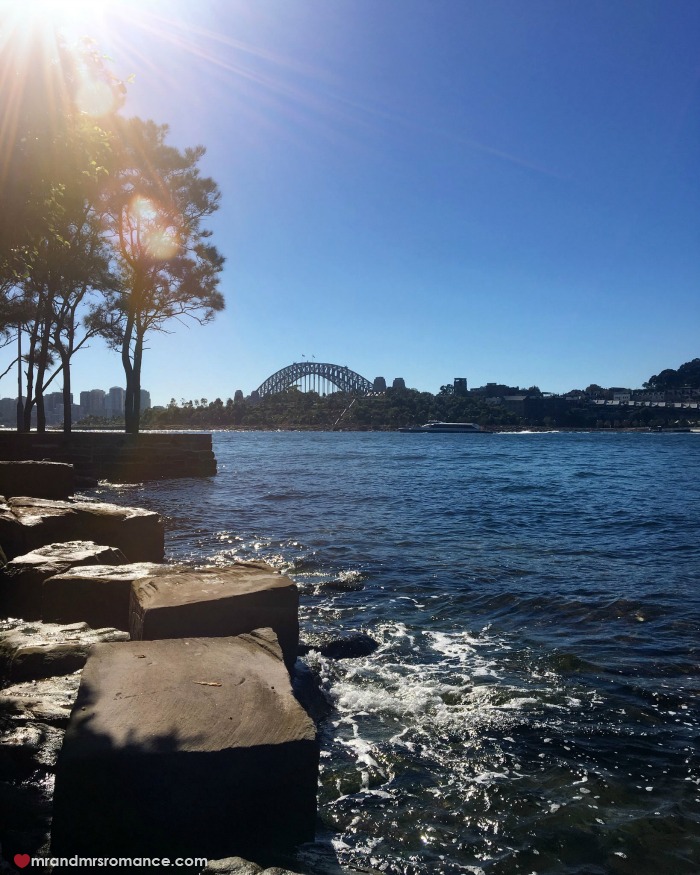 This little pathway leads you to these enormous sandstone blocks. You have to hop from one to the next to get to the park beyond (or take the longer, dryer way). You have to time it right though, or the occasional rogue wave can get you! 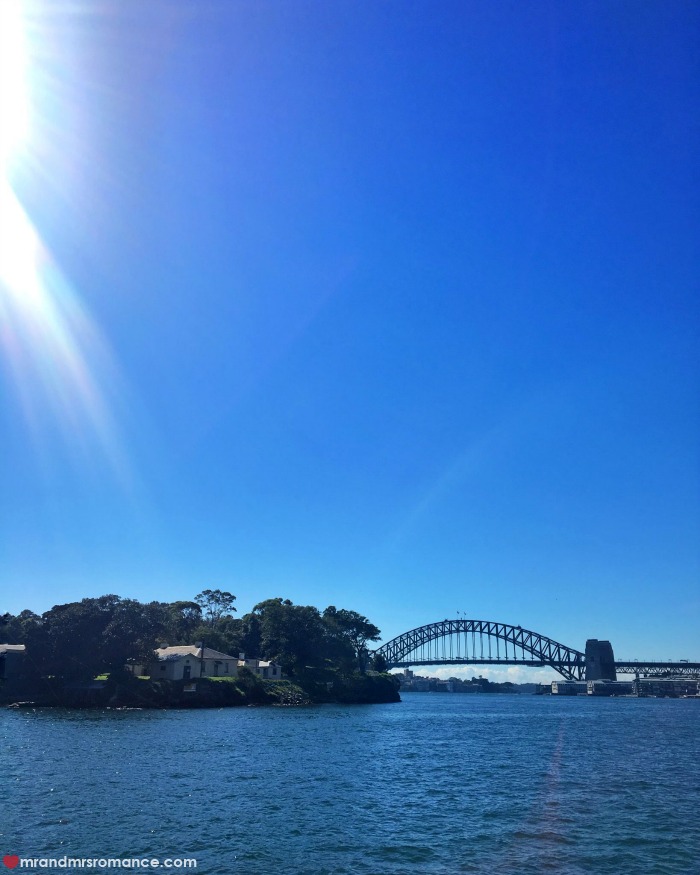 This is almost the classic view of the Sydney Harbour Bridge… except the land you see on the left is in fact a place called Goat Island. If you’re from Sydney or you know the harbour well, this is quite a confusing view. This is in fact also from Balmain looking east.

Goat Island has lots of colonial history but is also an important place for the women of the Aboriginal people of the area – the Eora. It was in fact a favourite spot of Barangaroo – the wife of Bennalong, elders who were here when the First Fleet came to these shores in 1788.

We hope you’ve enjoyed this IG Edition. We’ve got lots of good stuff coming up in the next few weeks make sure you stay tuned! 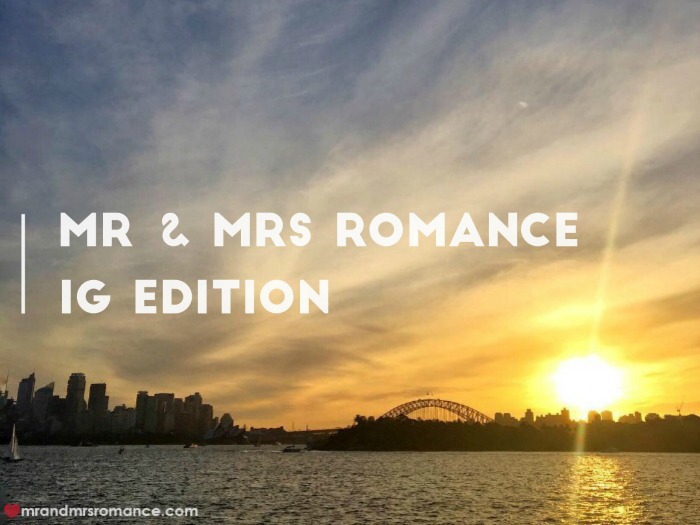 Congratulations! The winner of our Spirit House restaurant cookbook giveaway is…

Our competition was to tell us your worst cooking nightmare. This competition topic idea was inspired by a friend of ours trying to make…