It’s not Christmas without chilblains! 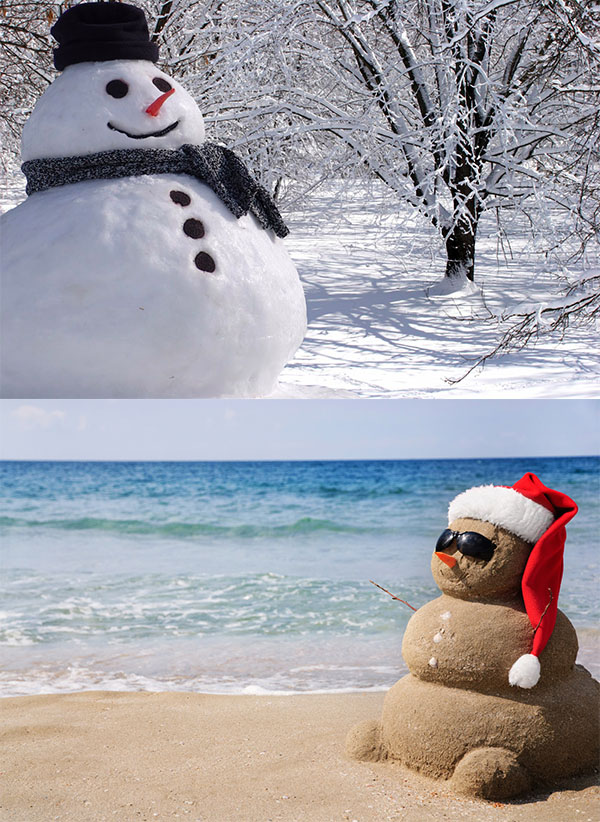 I was brought up with every Christmas spent huddled round the Christmas tree, girding our loins for combustible amounts of food and keeping warm. If it wasn’t cold enough to stop you spending more than half an hour outside, something was amiss.

For me, it’s the sight of all the decorations, the shiny, sparkling lights, even the carols; that and the long freezing cold nights and the sad little winter days – that’s what Christmas really feels like.

There’s nothing like shopping in the freezing cold, the stores all massively over-heated and packed. The strange hot-then-cold-then-hot-then-cold is exactly what I think of when it comes to Christmas shopping. Here in Australia, it’s the other way round. You’re hot till you go into the shop, then the massively over air-conditioned store freezes you.

I’ve spent most of my adult life in Australia. I’ve had a lot of hot Christmases and I’m used to them now. Almost. I still find myself humming Christmas tunes in the middle of the Sydney winter. In June. It’s very strange.

My first Christmas here, I remember spending the 25th in the pool of Mrs Romance’s sister’s place. My future brother-in-law was sat in the shallows drinking a cup of tea, of all things. It as surreal. But I liked it.

It’s funny, everyone back in England always talks about having a hot Christmas. Opening presents on the beach, going for a swim on New Year’s Day, eating your own body weight in prawns for Christmas lunch.

And another thing. she says:

Growing up in Australia, a hot Christmas is normal for me.

Every Christmas, my family still pretend it’s winter by putting up a real tree, spraying fake snow on the windowsills and watching Christmas movies.

Only difference was we’d have the air conditioning on because we didn’t have a pool!

Then on Boxing Day we’d head to the beach and eat leftovers.

I have to agree with Mr R that a hot Christmas isn’t the norm, but it has its benefits, such as

The last point is probably the main reason I love a hot Christmas. Yes, it’s hard to eat a massive Christmas lunch and then put on a bikini but at least you don’t have to do a countdown to the New Year in the freezing cold.

I can never understand people in the northern hemisphere standing outside to watch fireworks on New Year’s Eve when there is snow on the ground. It’s so cold!

Plus it’s hard enough to get a taxi home on NYE, then add in snow and cold and the whole experience is miserable. Give me a hot NYE anytime.

You don’t have to sacrifice the hot Christmas dinner, you can float it off in the pool.

Which do you prefer: a hot Christmas or a cold one? Tell us in the comments below!

Wine of the month – Tempranillo

Over here in Sydney, we’re getting ready to turn our clocks back an hour, pull out our coats and bunker down for the winter….