In the heart of Hamilton, New Zealand – not far from the mighty Waikato River – is a church. It has stained glass windows, lofty ceilings and an altar of stainless steel. But its ministers are irreverent, its pious parishioners are free-spirited and its deity comes in a pint glass. Welcome to Good George Brewing and Dining Hall. 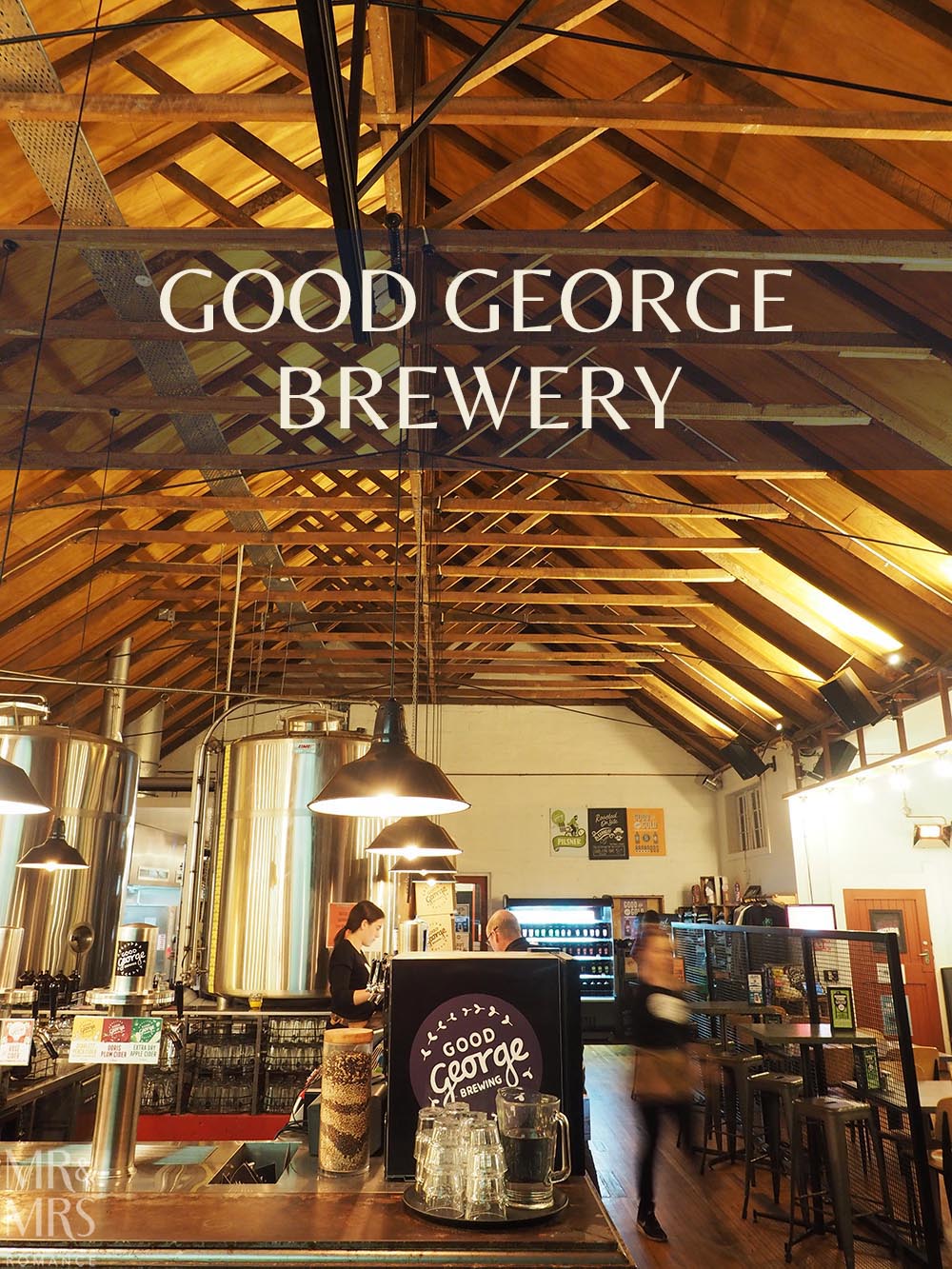 On the other side of the tracks to the Hamilton Western Rail line, the lights and music of the Good George Brewery light up the evening air. From the outside, it still looks every part a church, and so it should.

Once the hallowed grounds of St George’s Church, the owners of the brewery have taken care to maintain the ecumenical demeanour of the building. After all, the beers they make here are a religious experience in themselves. 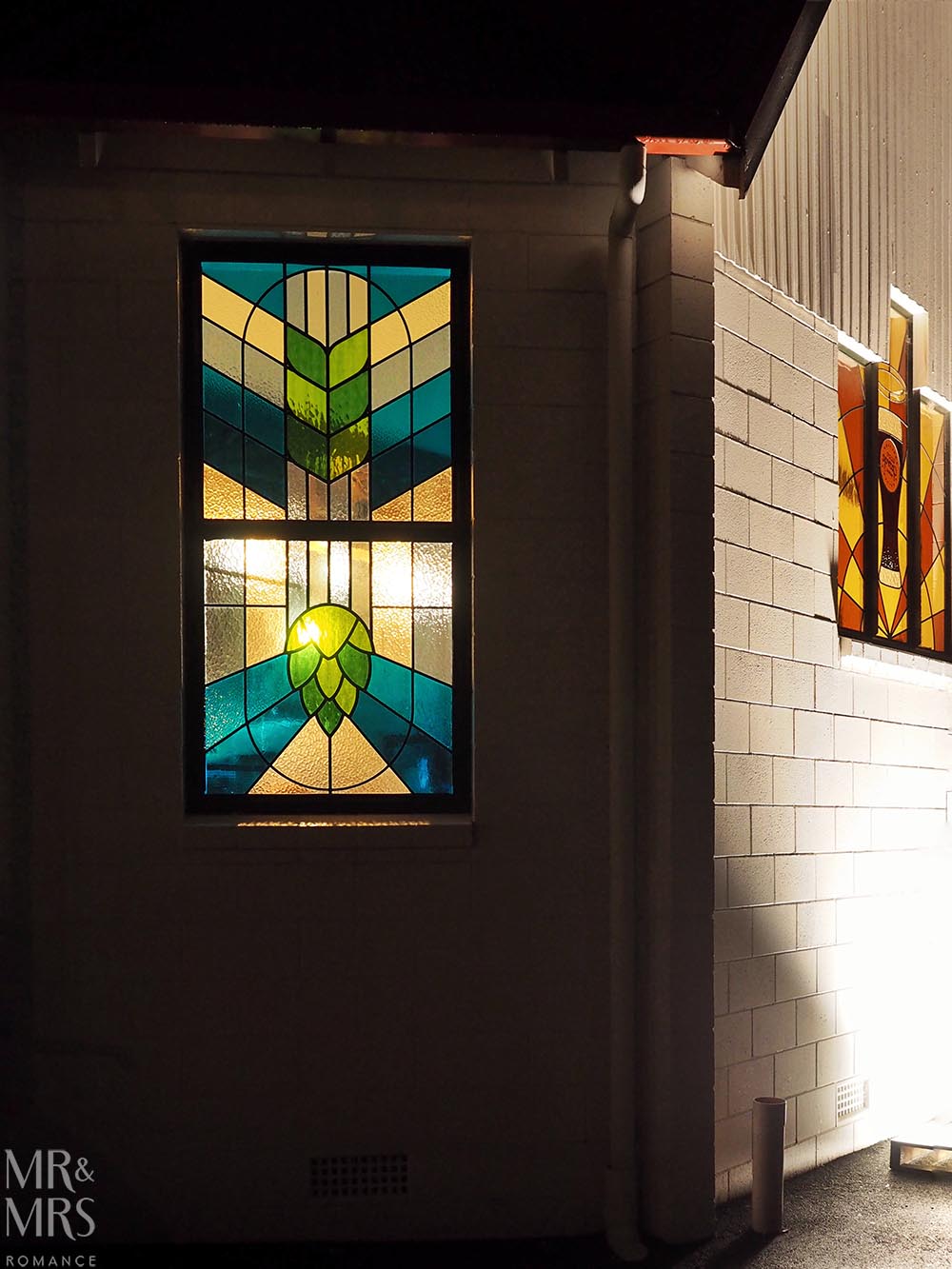 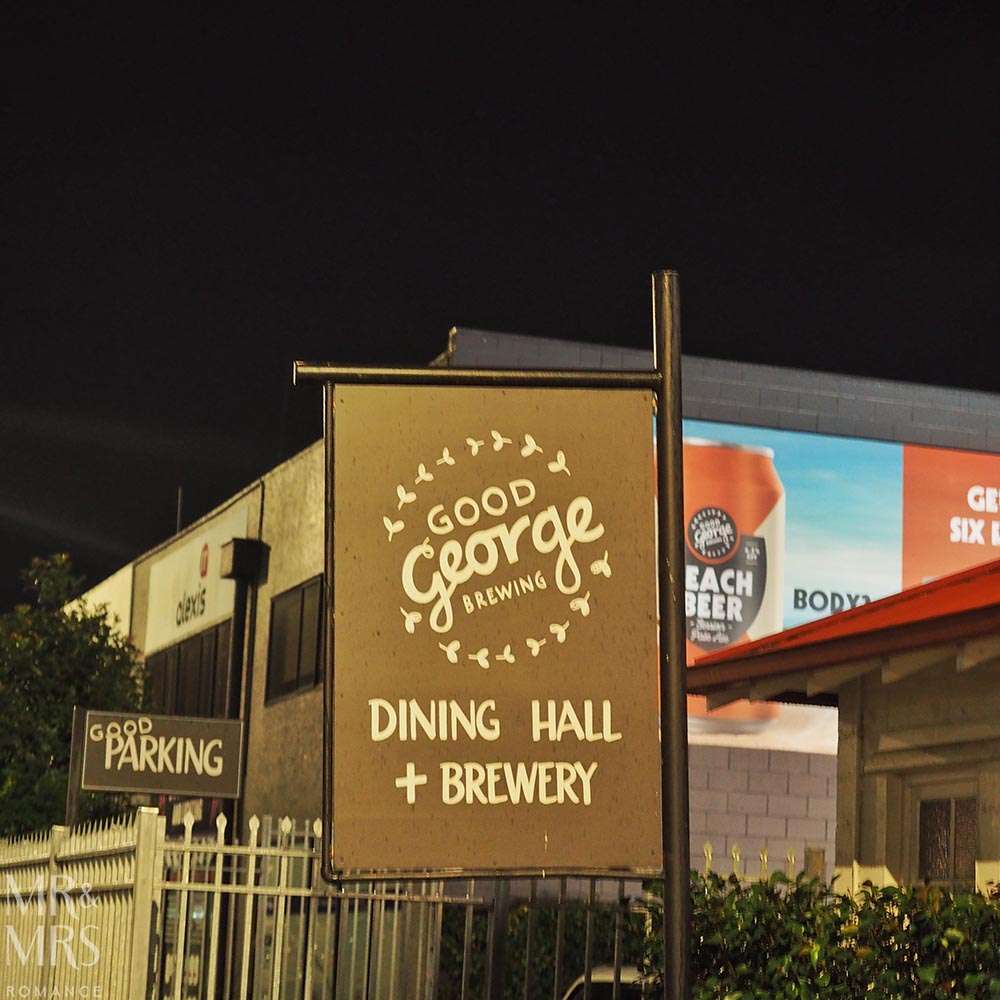 During our recent trip to the north island of NZ, we found ourselves in Hamilton heading to the Good George for dinner and a tour of the brewery.

Through the double front doors and what would have been the church’s entrance hall, the brewery has split the room between the kitchen, the long, tap-filled bar, dining and drinking areas and the working part of the brewery.

Towering steel cylinder tanks reach for the exposed wooden beams and rafters of the roof. Like shining saintly statues, they watch over the congregation below as they revel in the ales and food the Good George has provided. 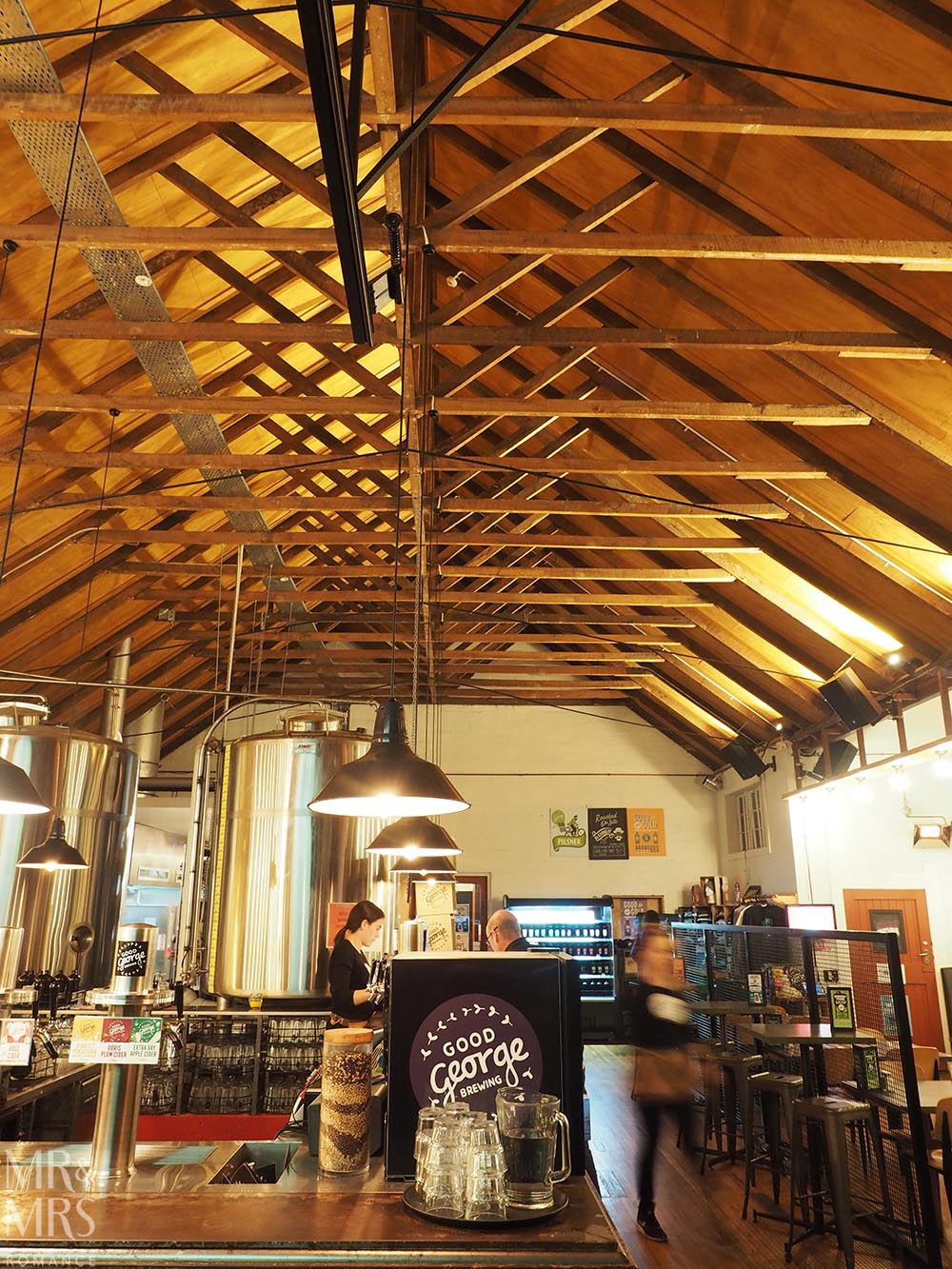 We start our evening with a five-beer flight to get a taste of some of the brews Good George crafts.

The tasting rack costs NZ$16 and also comes with a pot of peanuts. You can choose any five beers or ciders from the regular menu (and if you ask nicely, you can also try one of the seasonals). 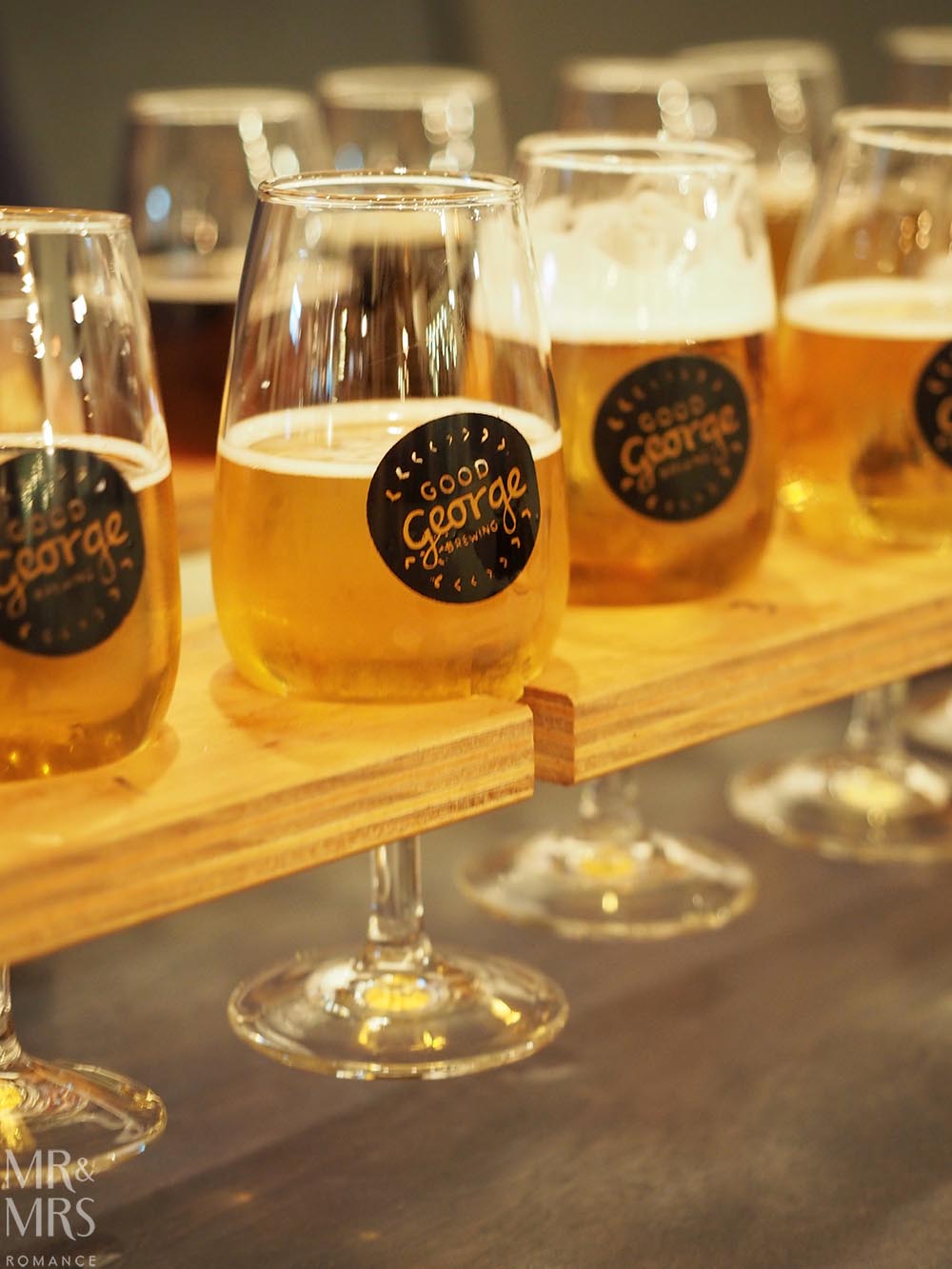 We chose five different beers and ciders so we could have a taste of as many beers as possible. Thankfully the staff are incredibly patient throughout the ordering process!

The food menu is geared hard towards suiting beer. 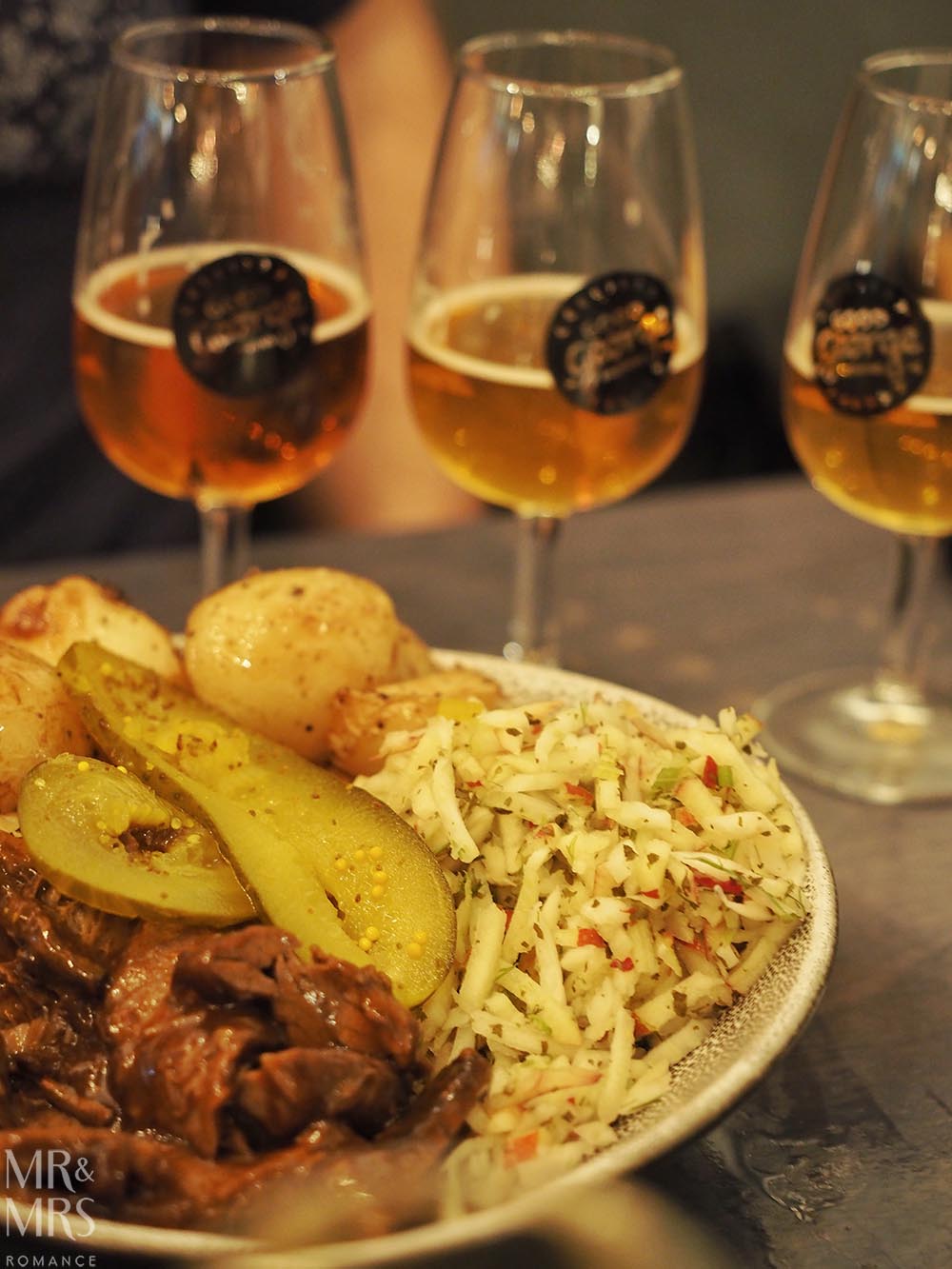 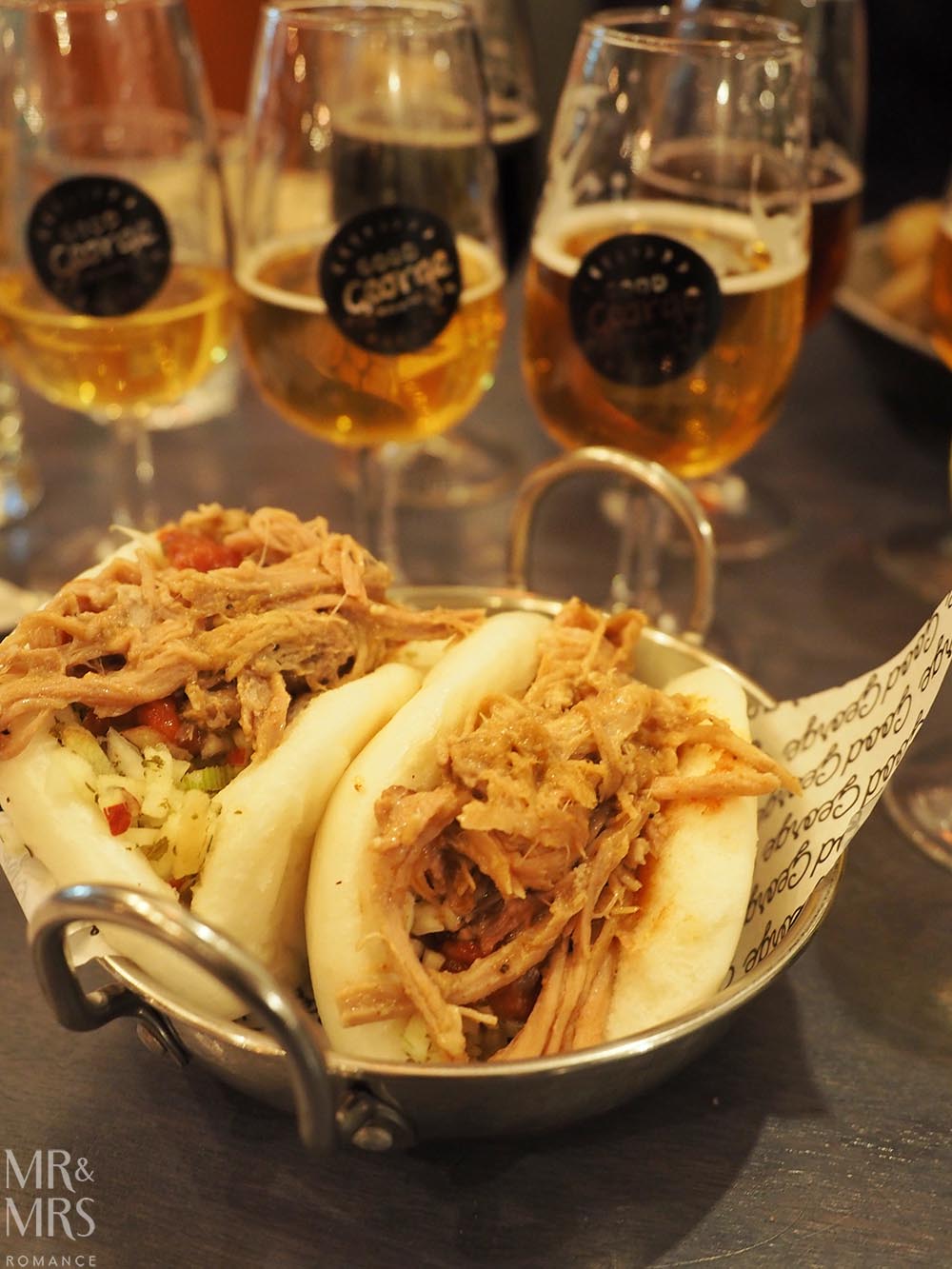 My brisket smoke bowl is excellent. You can choose to have either one or two types of meat and two different sides. I go for the amber ale smoked brisket with strips of pickles, the apple and fennel slaw and duck fat roast potatoes. Ample, tasty and a little bit different.

Once we’ve had a feed and sampled the best of Good George beers*, we meet our excellent guide Leslie, who takes us through the back to the brewery proper. For safety’s sake, we’re given high vis jackets. I heartily embrace my role of Beer Guru.

*It’s probably better to eat and drink after your tour if you can for a couple of reasons. You get a 20% discount on food and drinks with your tour, plus walking around carrying a smoke bowl and a load of beers in your belly isn’t as comfy! 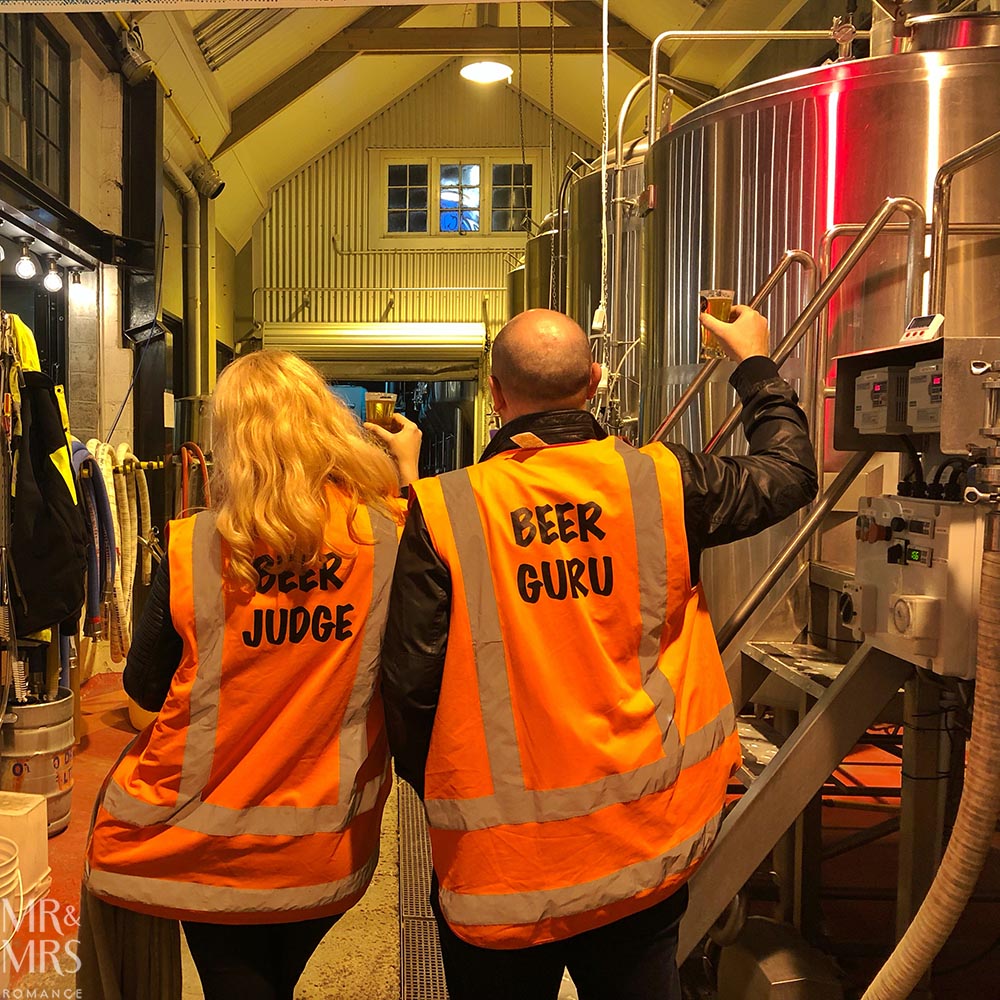 Leslie shows us through the whole process of beer-making, from the malt mill that crushes the grains, to the mash tun that ‘cooks’ the malt and creates wort, to the kettle that boils the wort and hops.

Then the wort cools off and goes into a fermenter where the yeast goes in, then the conditioning tank where the beer clarifies, cools and rests for a week.

Finally, the beer’s pumped into barrels or bottles and it’s ready for the best bit! 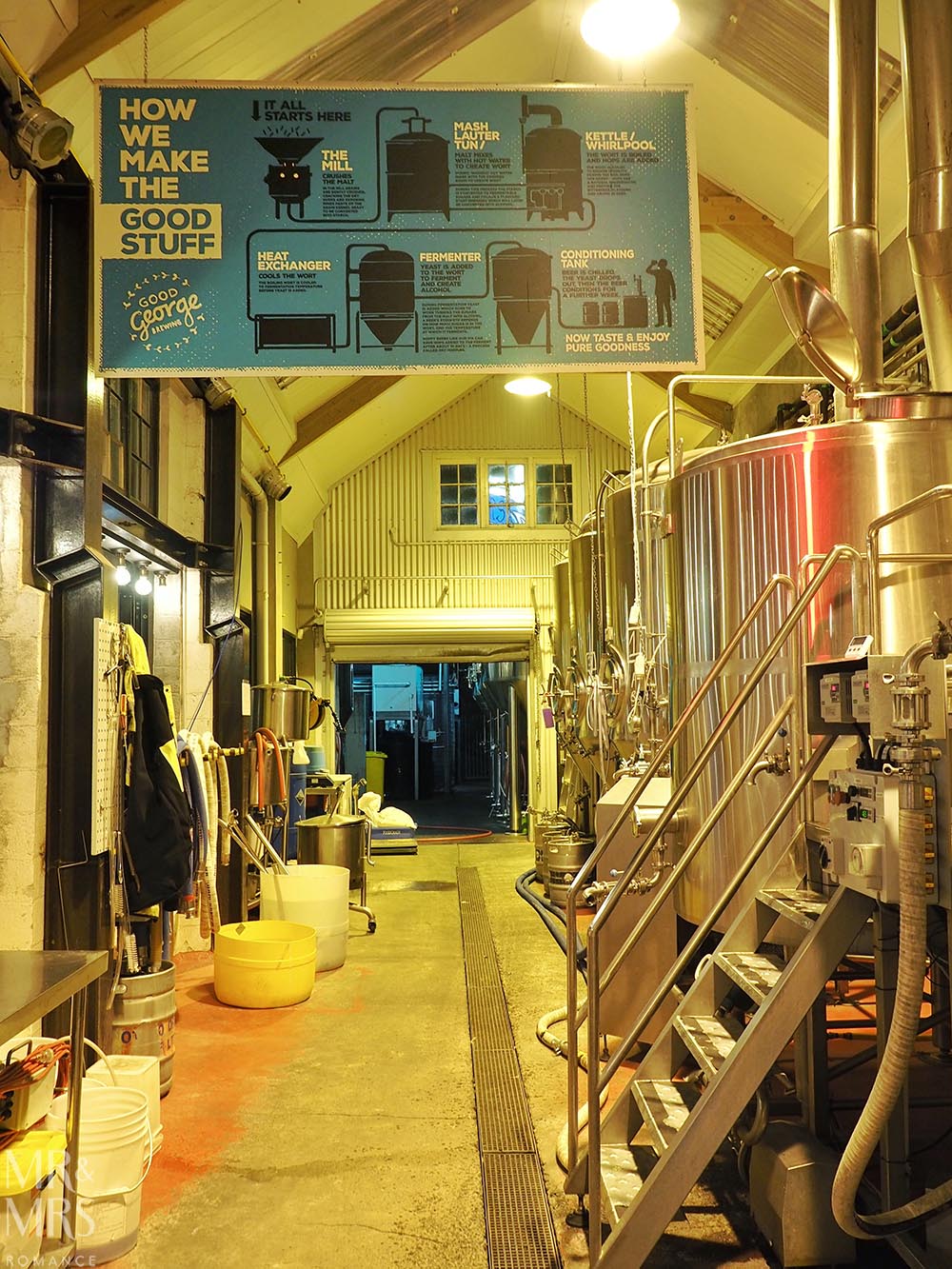 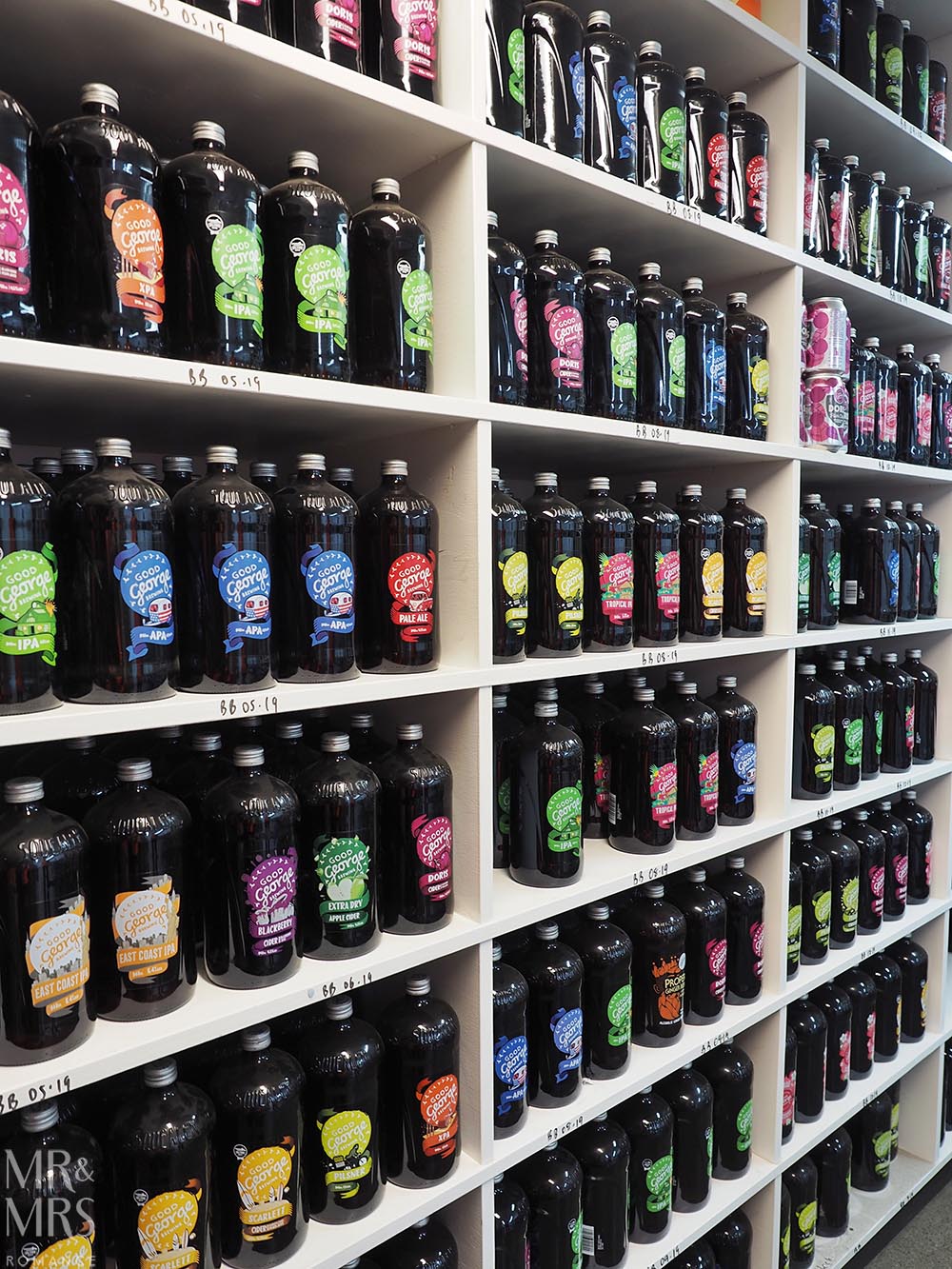 Good George Brewing has grown quite a bit lately (more about why and how in a minute) so they’ve expanded to the warehouse across the road.

Leslie takes us through to the tasting office and meeting room where we learn more about the brewery and get to pour our own beers from the taster taps.

Next we meet the fire truck the brewery uses for street parties and festivals. It carries two 1,000-litre tanks of fresh beer. Want one. 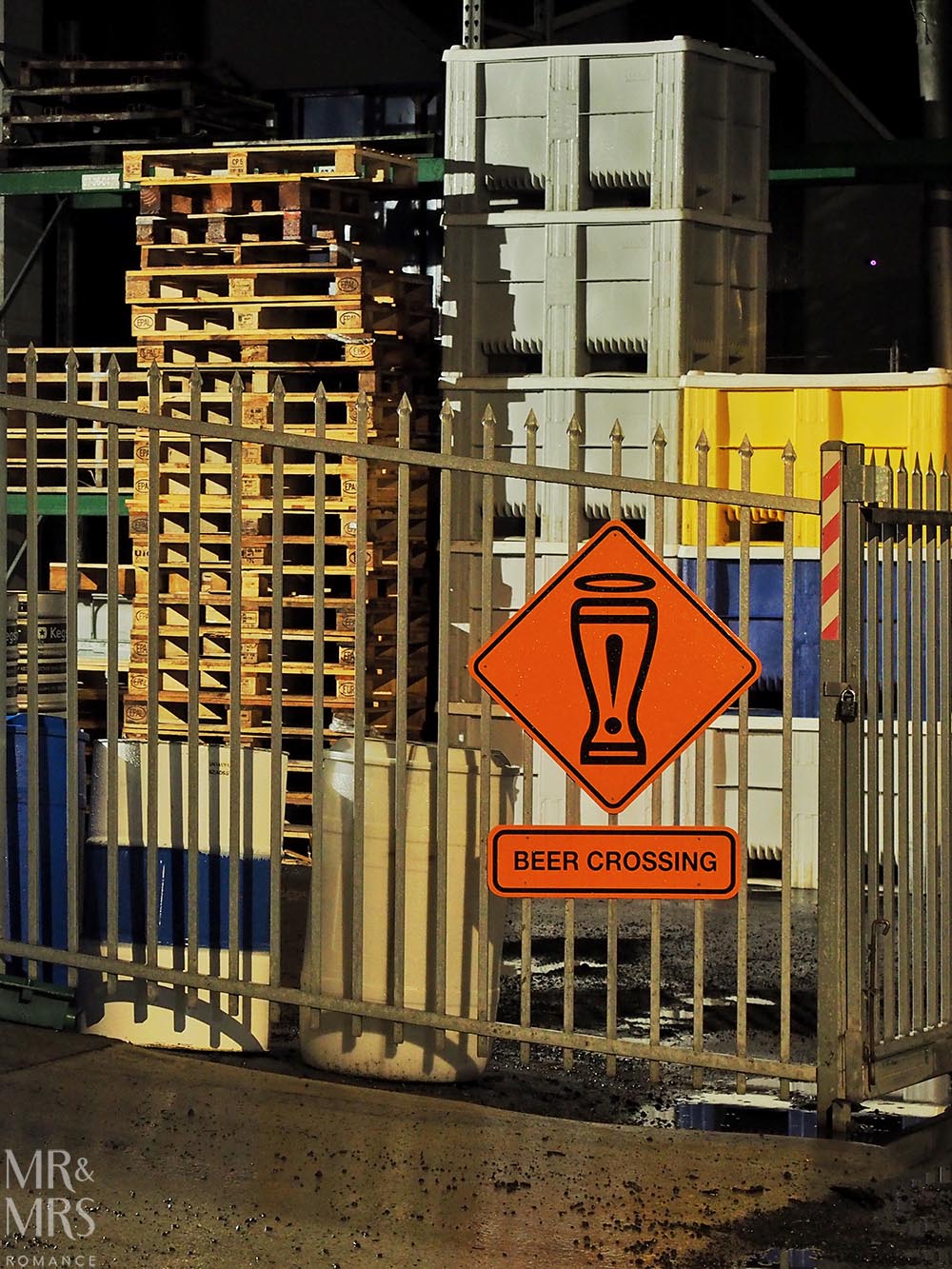 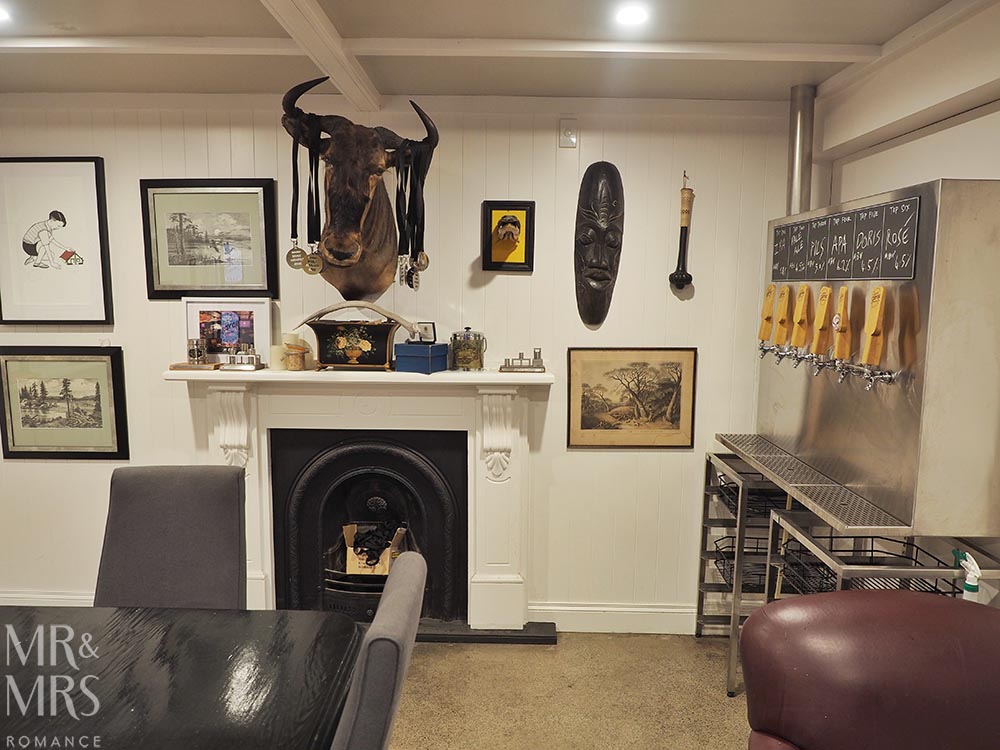 Finally, Leslie takes us into the cold storage part of the warehouse. It’s been fitted with strobes, lasers and speakers, and before we know it, the three of us are rocking out to TNT by ACDC. It’s quite the way to end the tour!

Not that it ends there. We stroll back to the main bar for a few more beers and to watch the world go by.

You can book your brewery tour on the Good George website here. 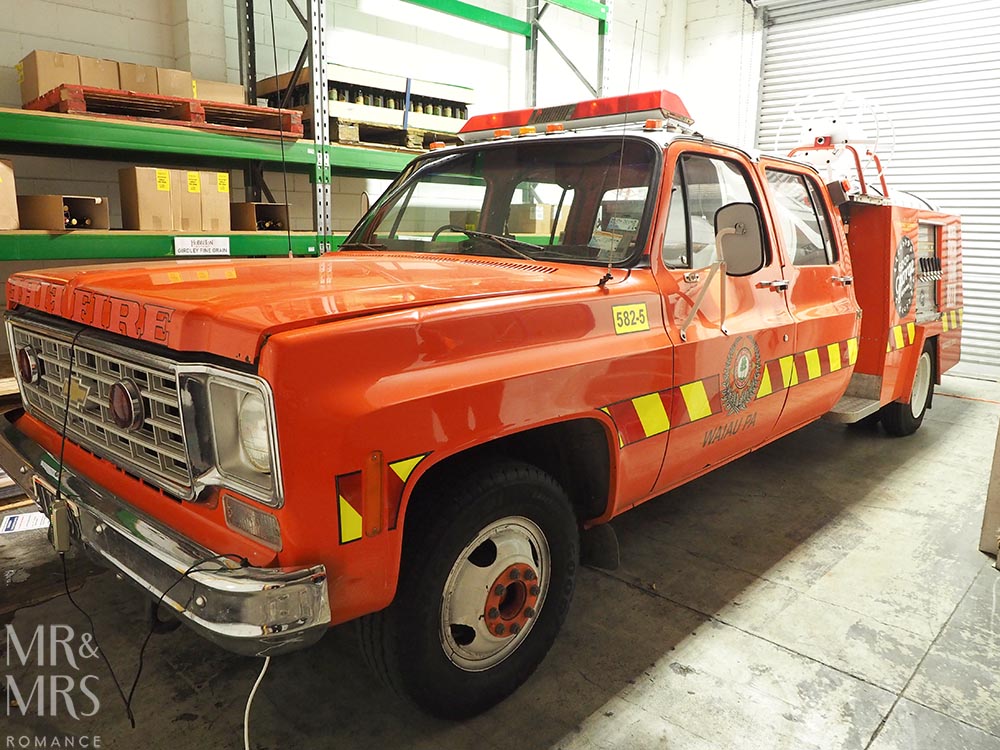 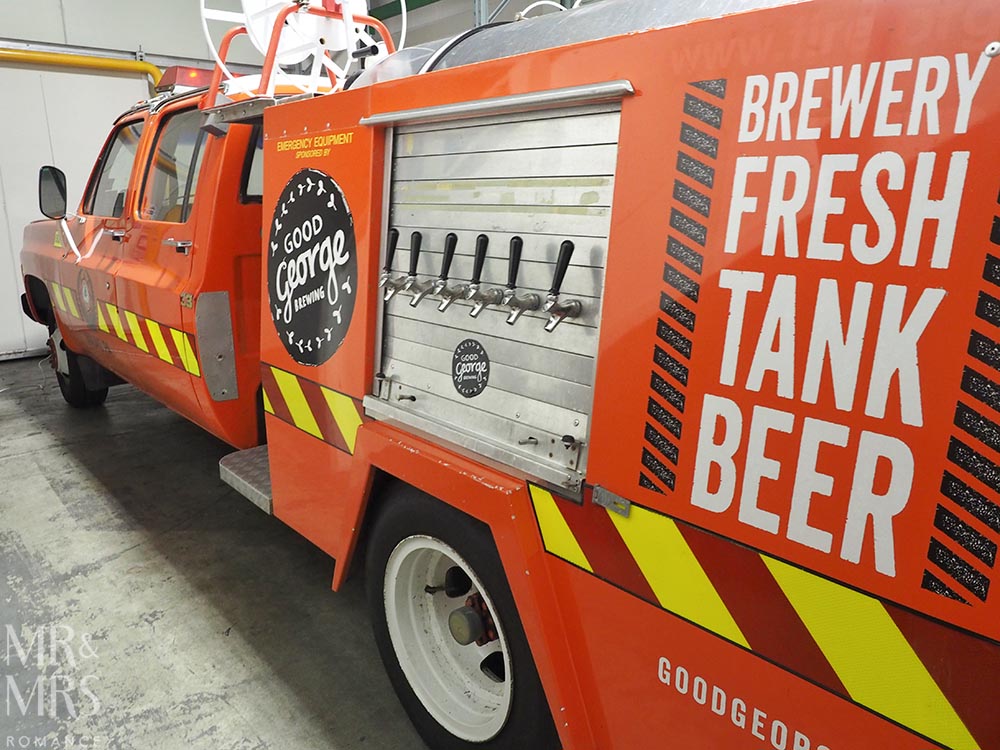 During the tour, we learnt a couple of absolute nuggets. Firstly, the beer they serve in the Green Dragon Inn at the Hobbiton film set down the road is all made by Good George.

These guys have crafted the secret recipes to the ale, the cloudy cider and the non-alcoholic ginger beer that you can only buy from Hobbiton. What’s more, the Green Dragon Inn is the busiest bar in the whole country. 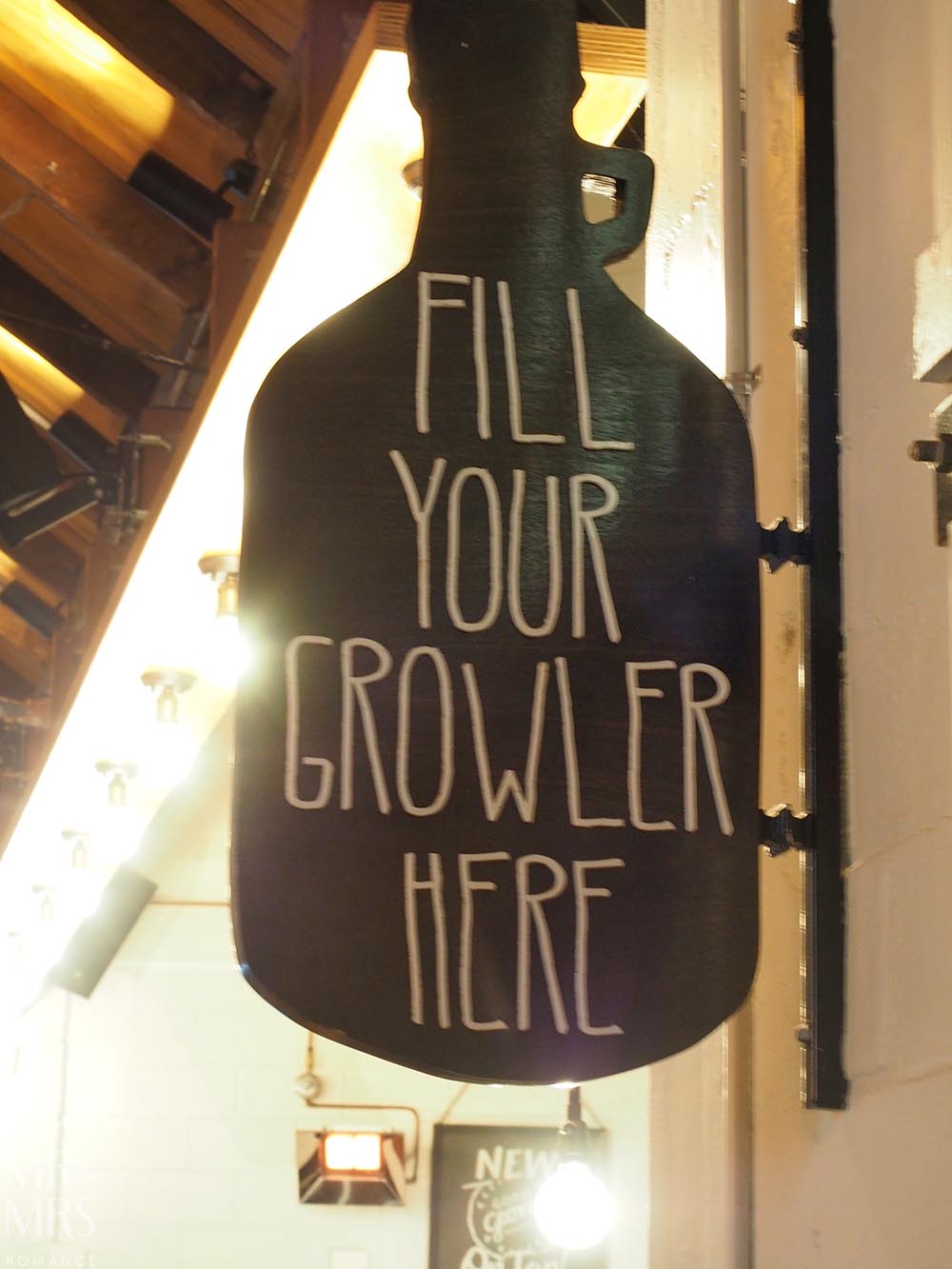 The other bit of news coming from Good George comes in the shape of a pot still.

That’s right, the guys at the Good George are working on their own gin!

We get to try a little of the prototype, which admittedly needs a little more refining, but the bones are there and it’s a delicious, juniper-lead spicy number that will go down a treat in the craft gin circles.

I wonder if – after they’ve got their gin right, Good George will start on a whisky too? 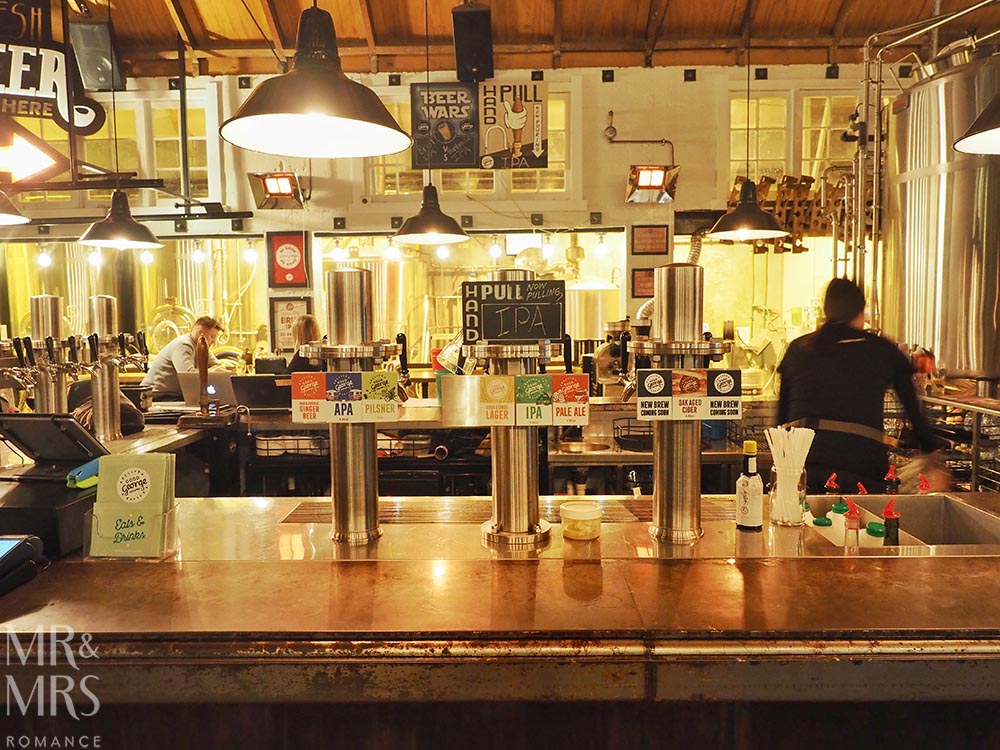 Whichever direction this excellent brewery decides to go, I’m sure they’ll make a success of it. They have everything they need. A great product, plenty of ideas, committed staff and willing disciples who’ll follow them all the way.

Bottom line: come to the Church of Good George. It’s one place your prayers are sure to be answered.

We visited Good George Brewing as guests of Hamilton and Waikato Tourism.

It’s almost worrying how easily we’ve settled back in here in the UK. We were here less a year ago, which makes it easier,…