Every culture has its version of dumplings. In Italy it’s gnocchi. Delicious pillowy potato dumplings in your favourite pasta sauce – the perfect soul food and fun to make at home. Here’s Christina’s family recipe for gnocchi. 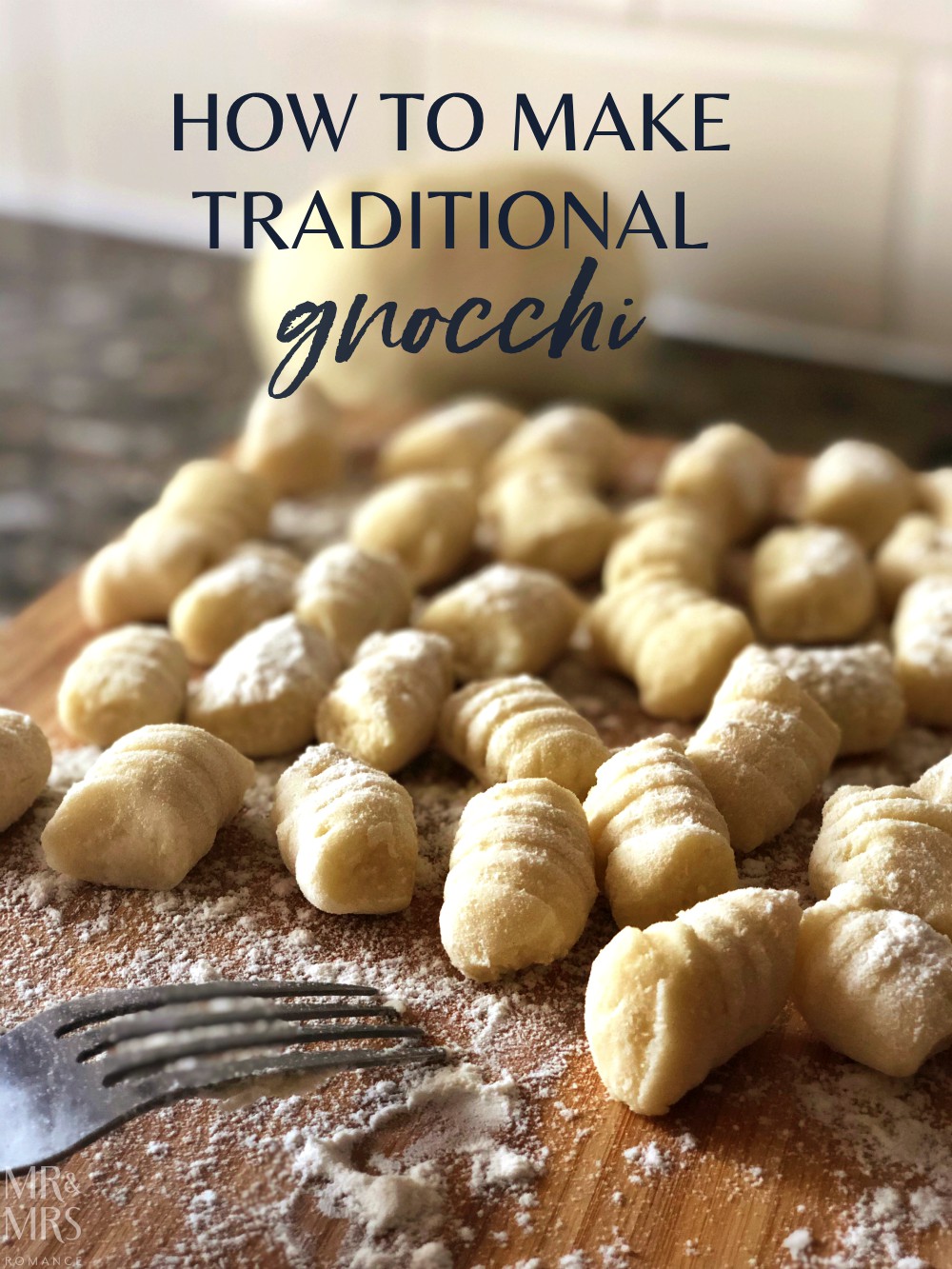 Gnocchi is – and has been for a while now – a popular dish to have on restaurant menus whether they’re Italian or not.

One of the tastiest gnocchi dishes we’ve had recently was in a beautiful restaurant in Maitland NSW whose focus was on using local indigenous ingredients.

The enormous gnocchi they serve at Coquun is pillowy, rich and tender – everything you want in a dish heartwarming like this.

Whether it’s been in vogue in professional kitchens or not, gnocchi has always featured with Christina’s family. Her father, who was born in Trieste, Italy, was brought up with gnocchi – though perhaps not the kind you’ve heard of or that you’re even likely to find in any restaurant.

The gnocchi of northeastern Italy and Slovenia is truly huge – about the size of a golfball. Known as gnocchi di prugne is traditionally is stuffed with a small pitted plum and is served in a cinnamon and breadcrumb syrup… and it’s often offered as a main course!

But don’t worry, that’s not the recipe we’re sharing with you today – though it’s delicious! 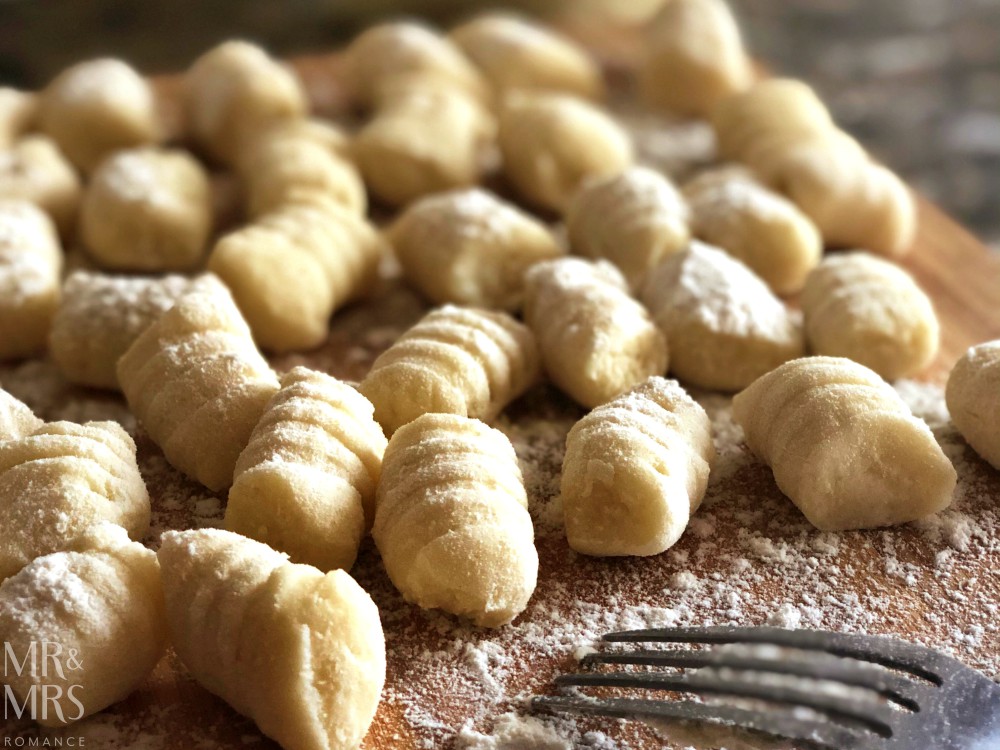 To make the gnocchi you find in most Italian restaurants is reasonably simple, though takes a number of steps.

It’s a bit like how you make taralli – another Italian dish, but these pretzel-like snacks come from the opposite end of the country in Puglia. 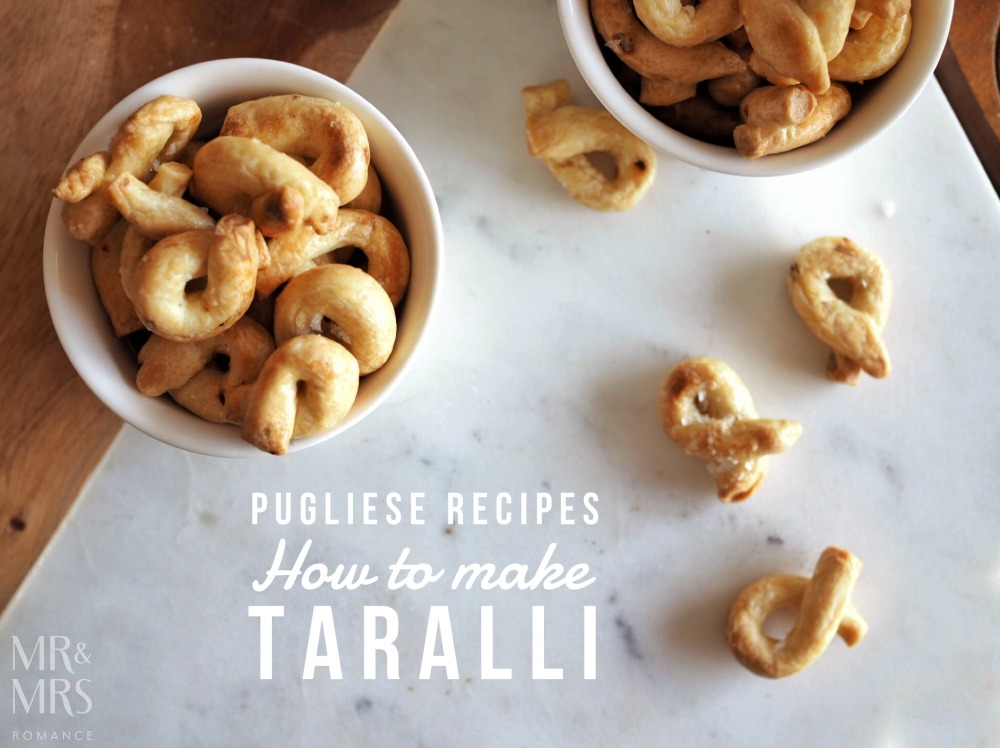 There’s nothing quite like fresh gnocchi. It’s so much better than the mean, dry little things you buy at the shops – even a good quality deli – and way more satisfying.

This recipe makes a large amount of gnocchi, so either make it hungry, for plenty of people, or be ready to freeze some when the time comes.

– You also need a potato ricer, a big pot to boil the spuds and a large surface area to work on – ideally granite.

Buy your potato ricer here for Australia or here in the USA.

We’ve given more in-depth instructions below, but here’s the method in brief: 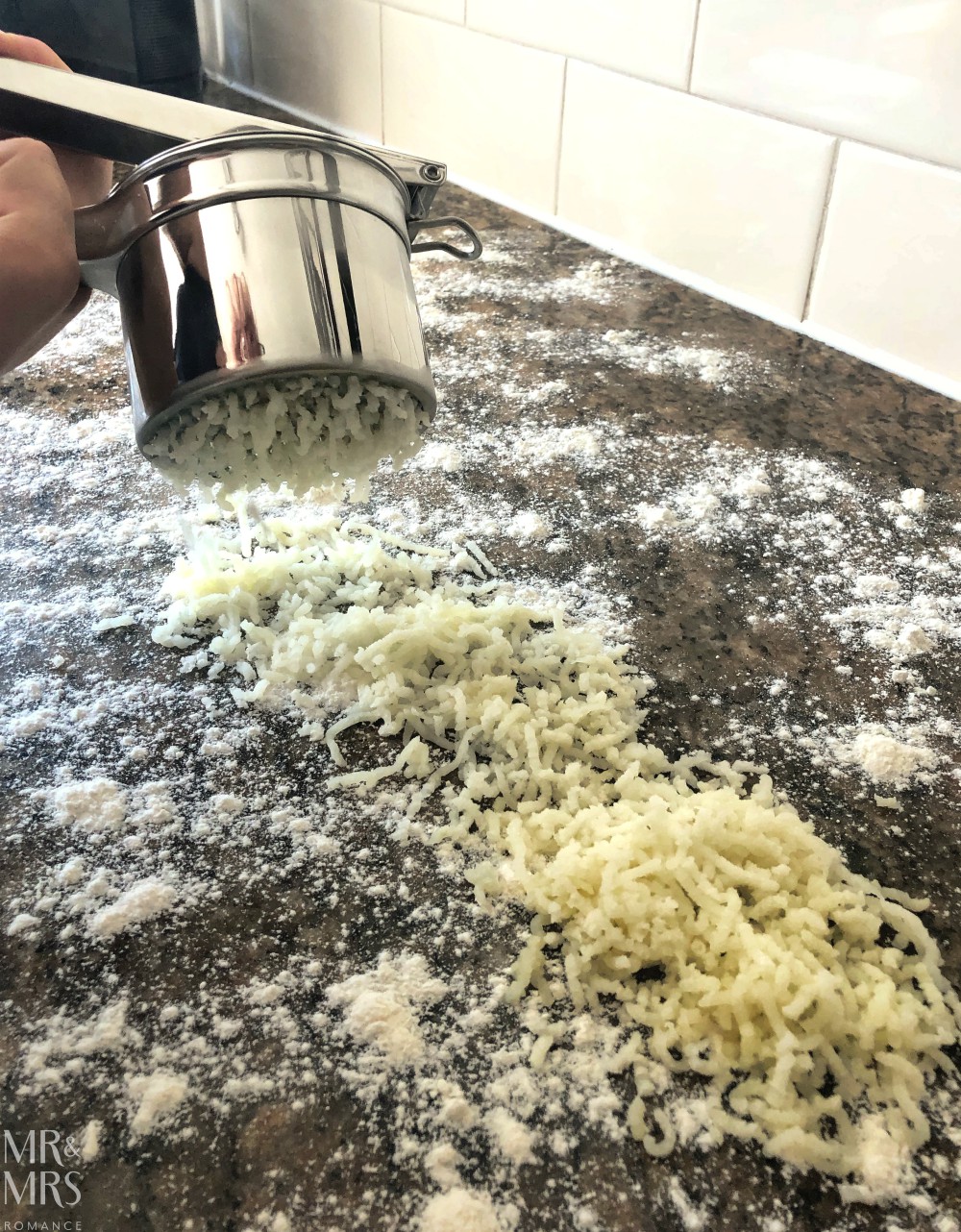 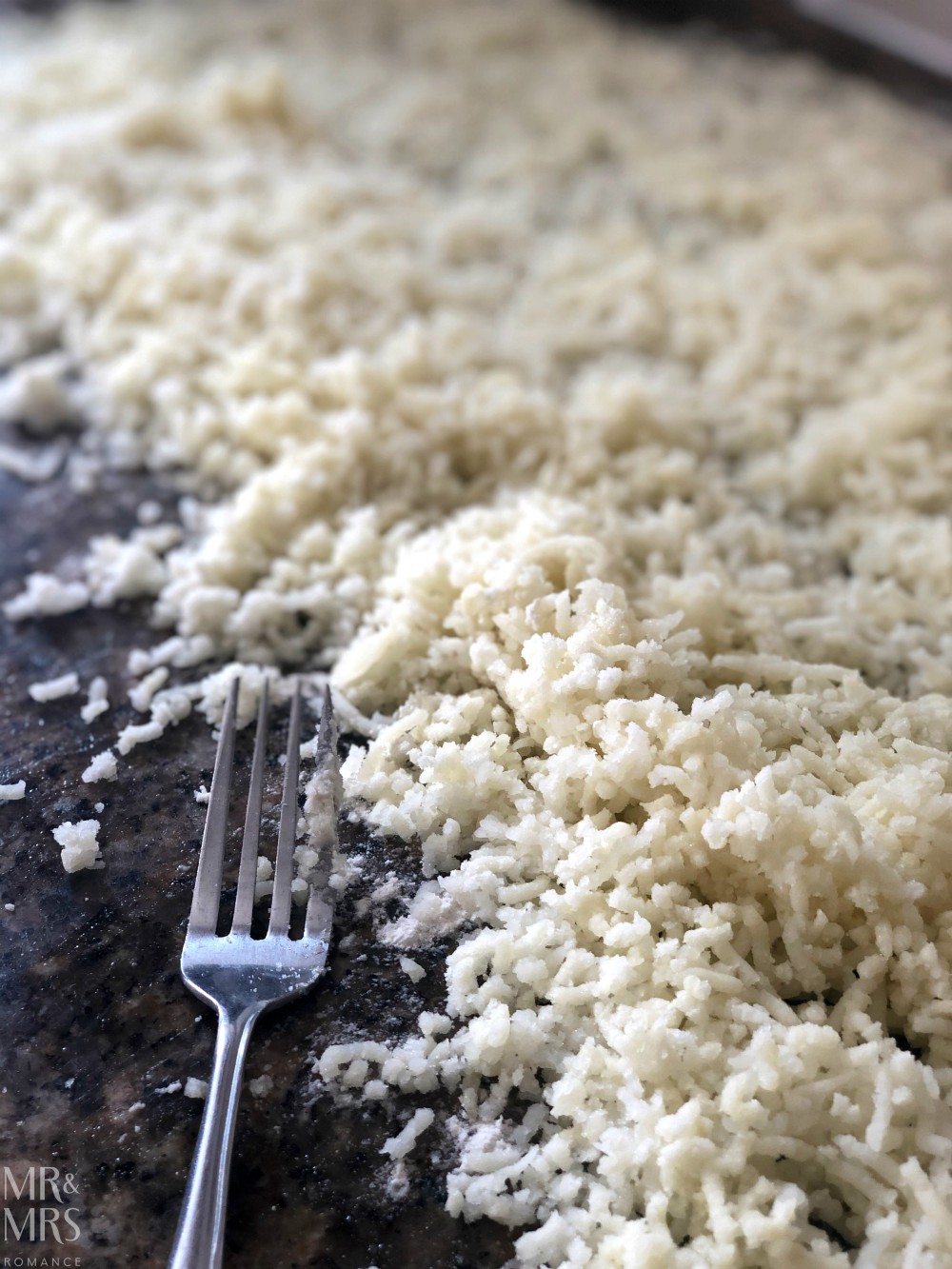 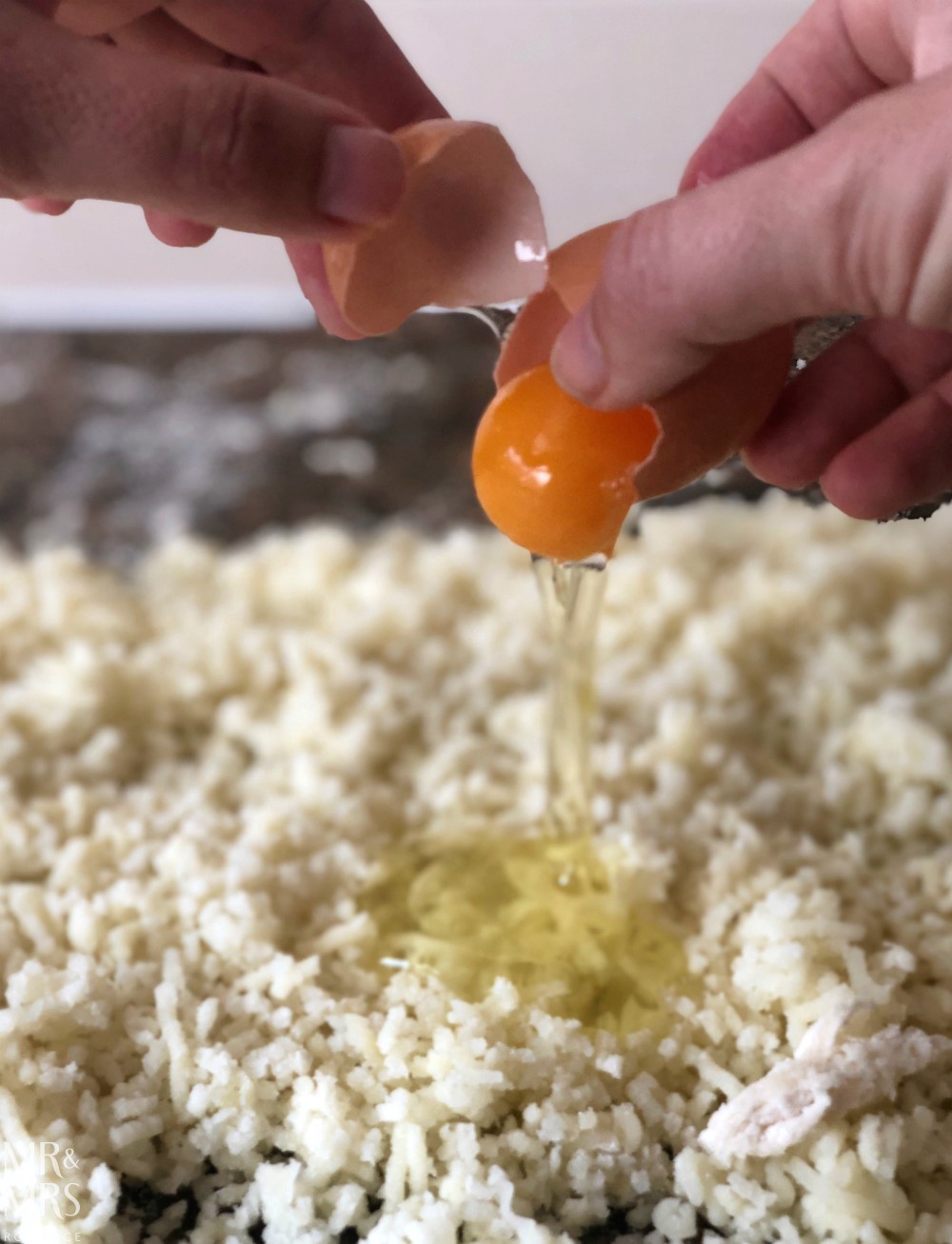 1. Clean the potatoes but don’t peel them. Boil them thoroughly in a big pot with enough well-salted water to cover them. Prick test one with a wooden skewer. If there’s resistance in the middle, keep boiling.

2. Remove the potatoes from the water and carefully remove all the skin while they’re still hot and pass them through the potato ricer. The hotter the potatoes at this stage the better. As they cool, they become grainier.

3. Rice the potatoes onto the work surface, creating a thin blanket layer. The potato needs to cool now.

4. When it’s all riced, crack two eggs onto the potato ‘blanket’ and gently mix them into with a fork. 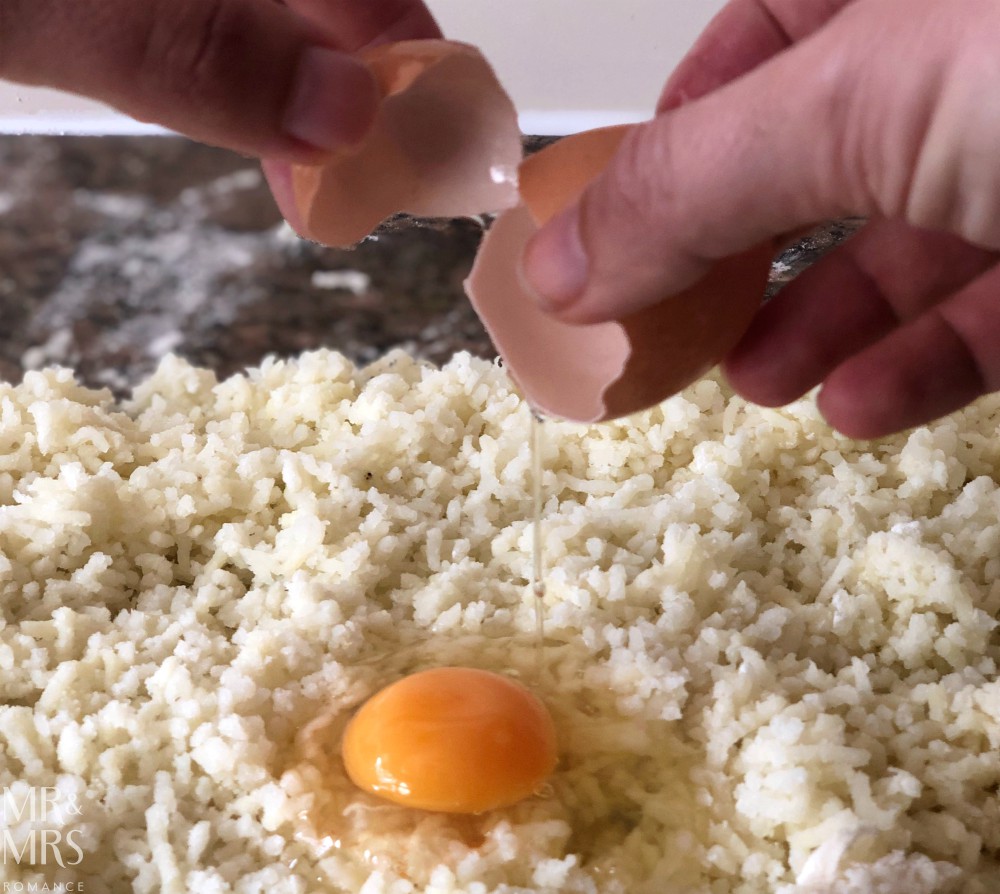 5. Add a layer of flour over the top, then begin to squish and kneed the mixture together with your hands. Gradually add more flour, kneading the whole time. Technique is important here because you don’t want to handle the potato dough too much. The less you touch it, the lighter and more pillowy the gnocchi will be. On the other hand, the flour must be well combined.

6. Stop adding flour and kneading when the dough doesn’t feel wet anymore, doesn’t transfer a thick layer onto your hands or the bench, but before it gets completely dry. Cut the dough into sections and roll it out into a sausage about 2cm in diameter – or whatever size you want your gnocchi to be.

7. Cut the dough sausage into 2cm-3cm pieces and roll them down the back of a fork to give each piece of gnocchi that pattern. The pattern does have a purpose: it catches the sauce you serve it in. 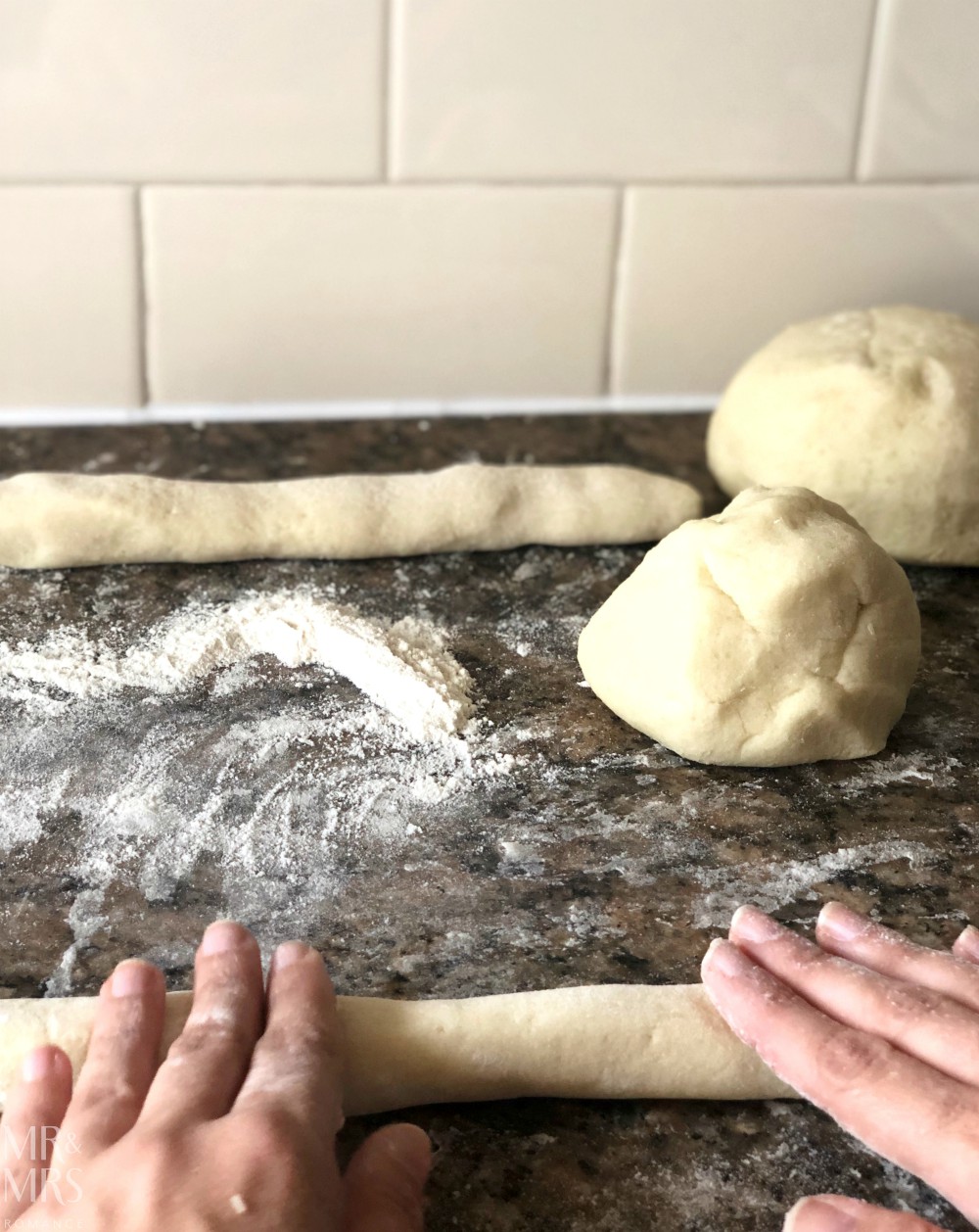 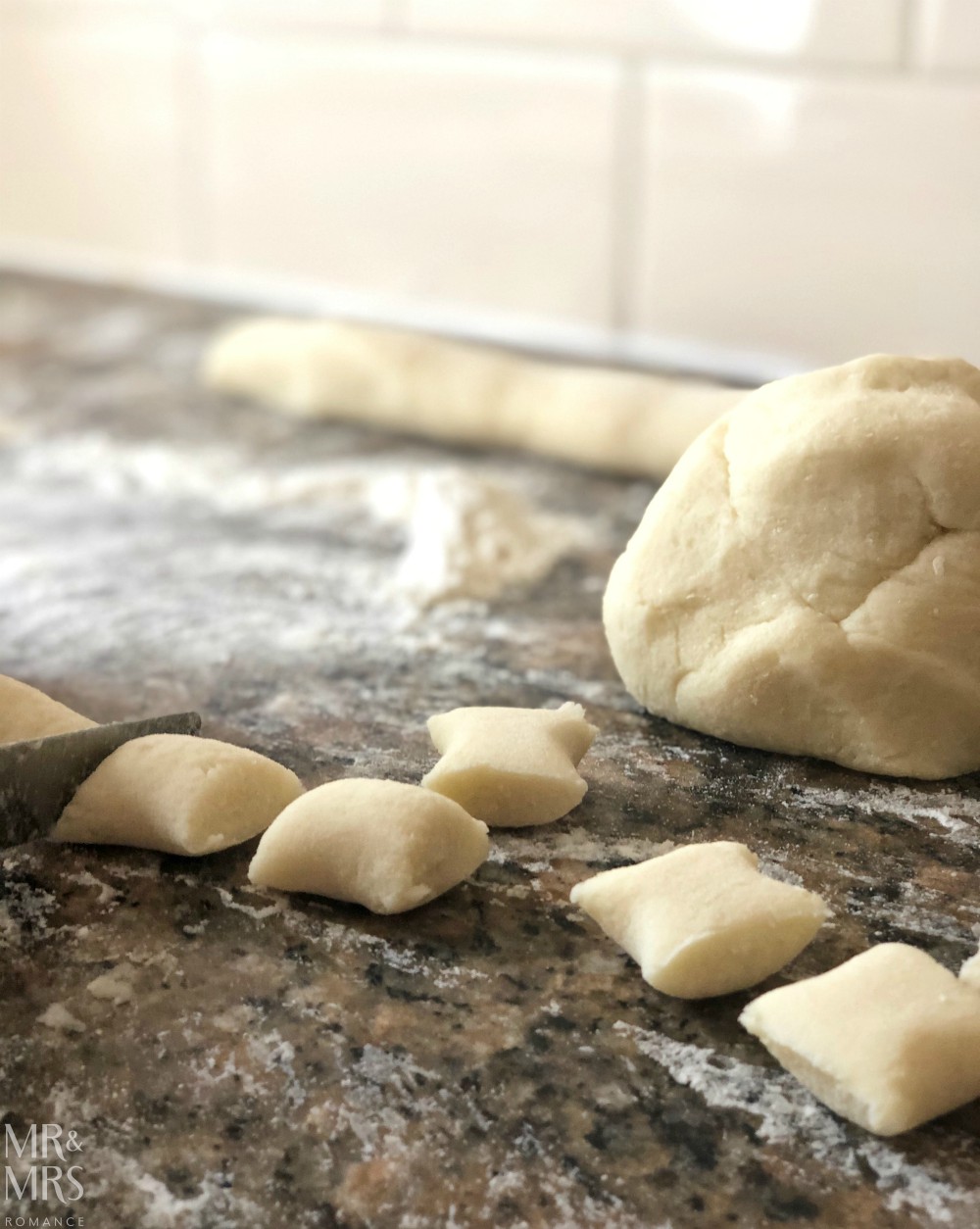 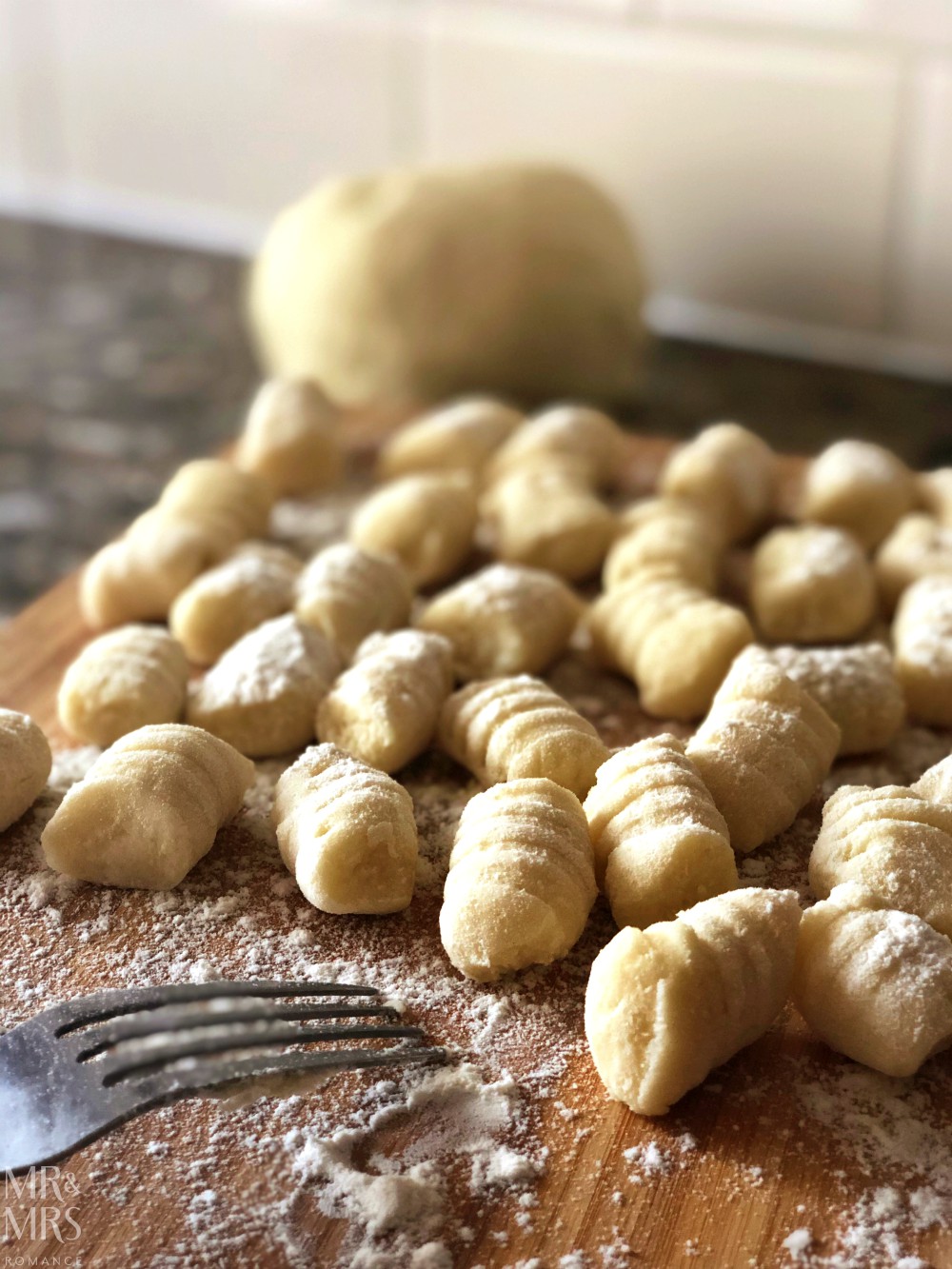 8. As you work, set the gnocchi to one side on a well-floured tray or plate and dust with more four to avoid them sticking together.

*** This is the stage to freeze any gnocchi for later. Make sure the gnocchi are all separate and freeze them flat. Once they’re frozen solid you can put them in separate ziplock bags. They should keep for a couple of months. To cook them, follow the next steps in the same way. ***

9. Bring a large pot of salted water to the boil and carefully drop about 7-10 in at a time. Don’t add too many at once or you’ll cool the water down too much. The gnocchi will sink at first and then magically rise back up when they’re cooked. Scoop them out as soon as they rise and put them to one side.

10. When you’re ready to serve, add them to your favourite sauce and enjoy! 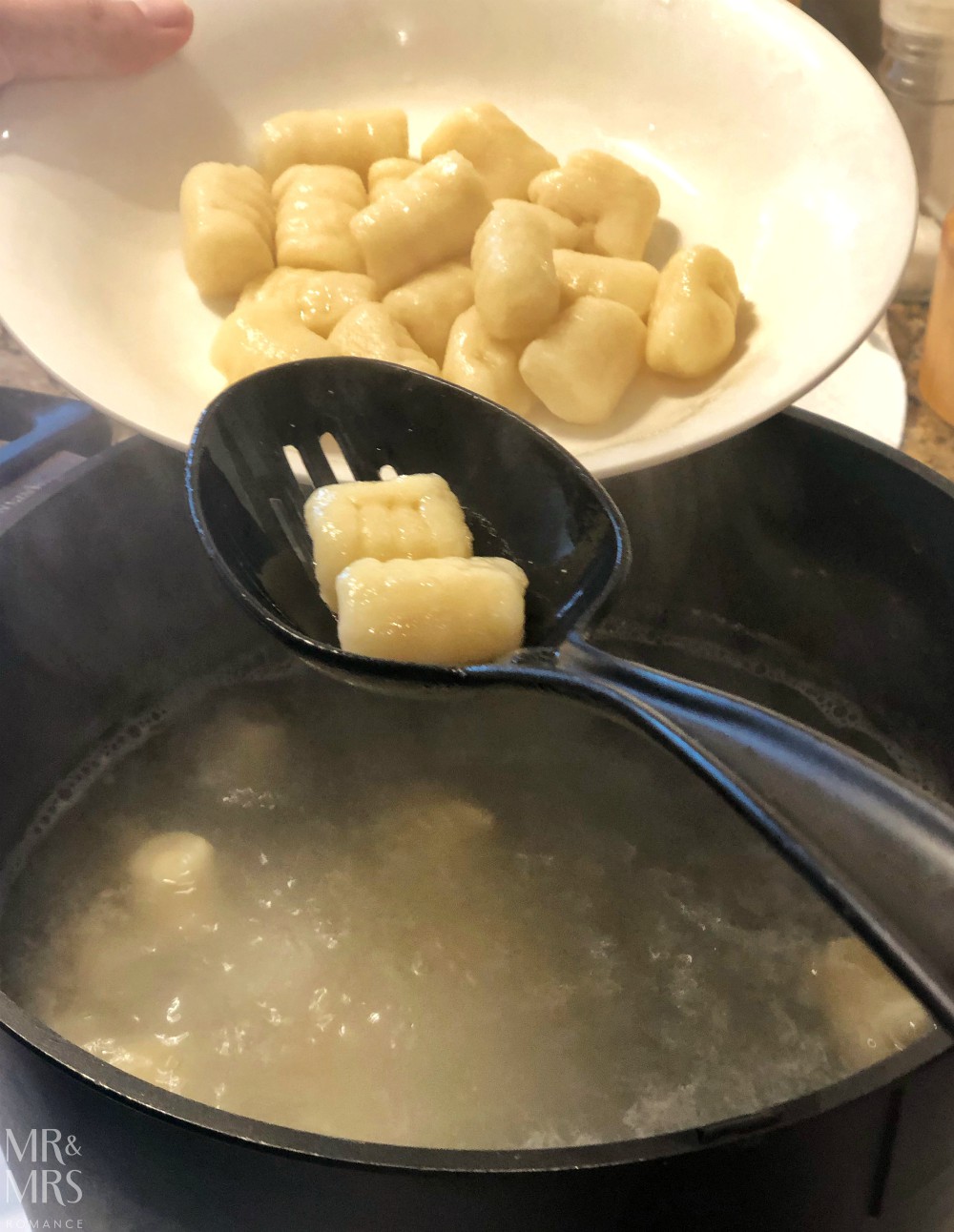 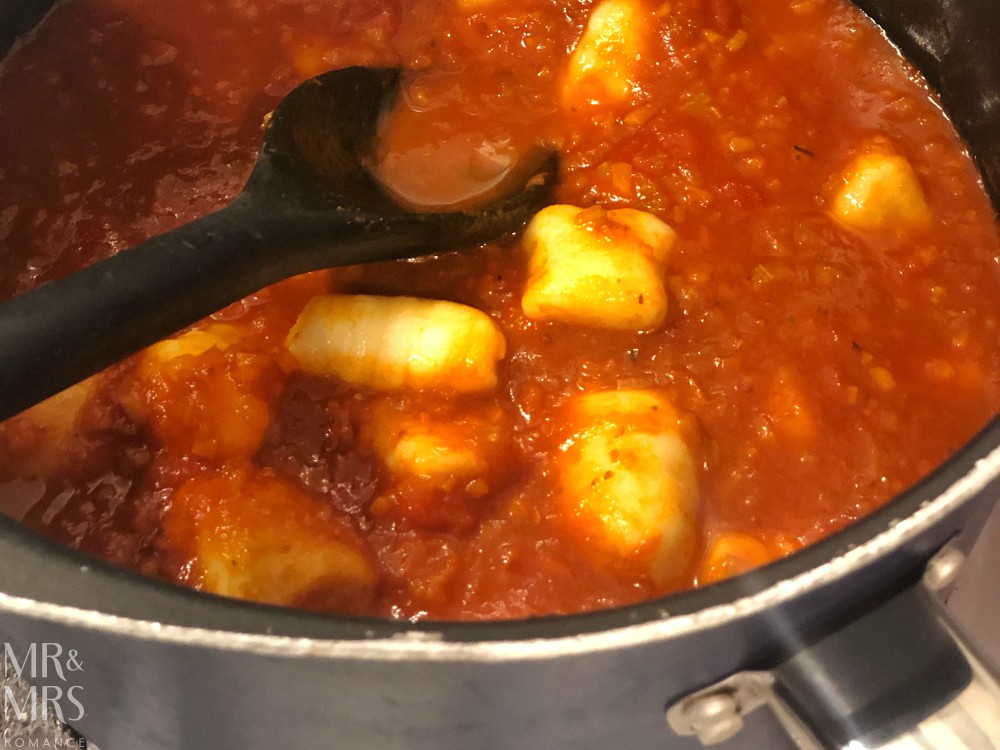 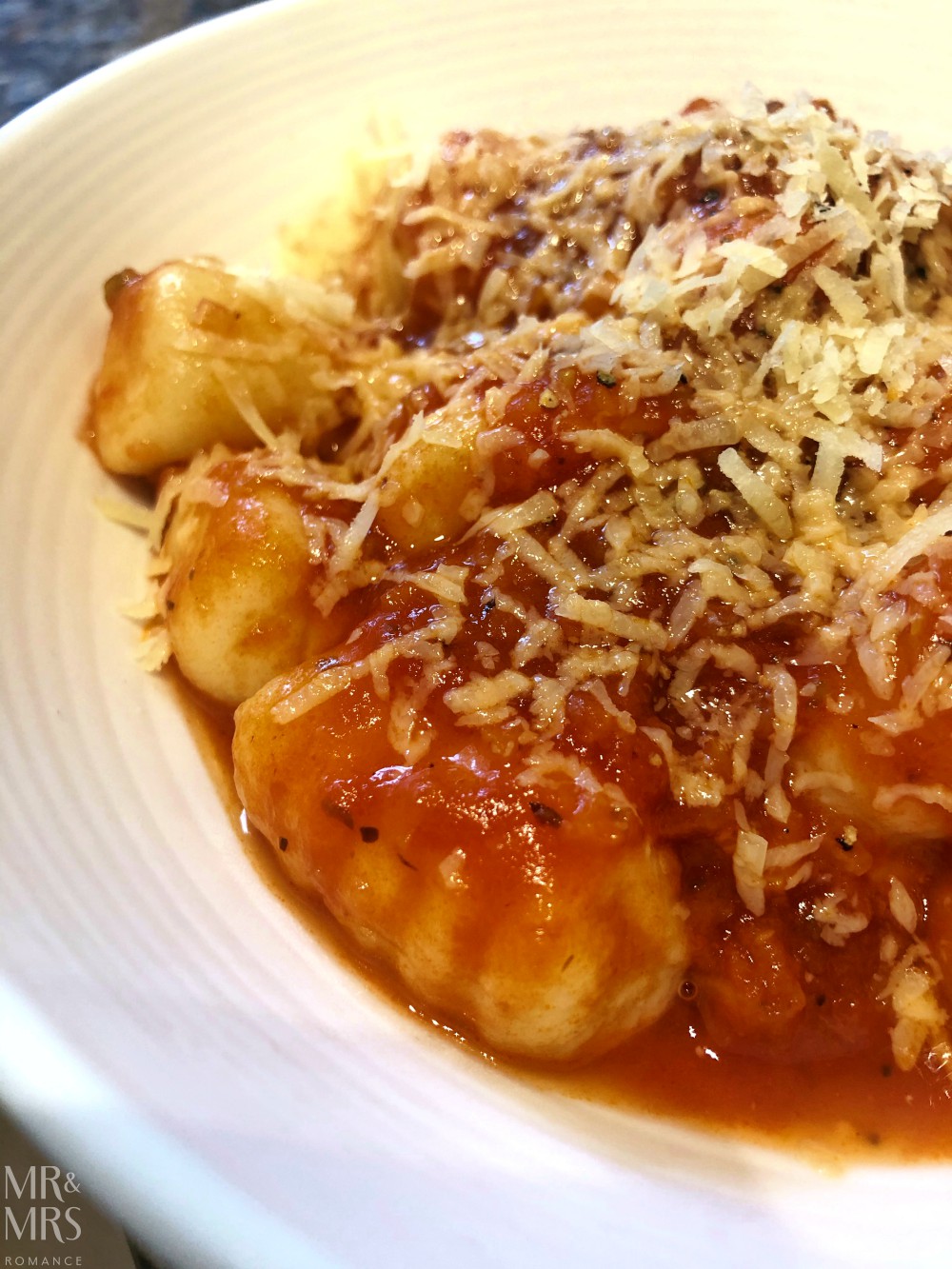 The classic sauce to serve with gnocchi is a tomato-based one like a simple pomadoro or putanesca. You could add meat and make a ragu, serve your gnocchi in a spicy sauce or even in a creamy one. It’s up to you.

And if you really want to crank up the flavour of your sauce, check out my secret weapon to find your sauce’s ‘bliss point’ here.

Gnocchi is a great thing to make at home. Christina’s family would often make batches of gnocchi together and she holds her childhood memories of making this classic Italian dish dear to her heart.

Do you have any recipes that you still make now that you used to when you were a kid? Do you have a favourite potato-based recipe? Tell us in the comments! 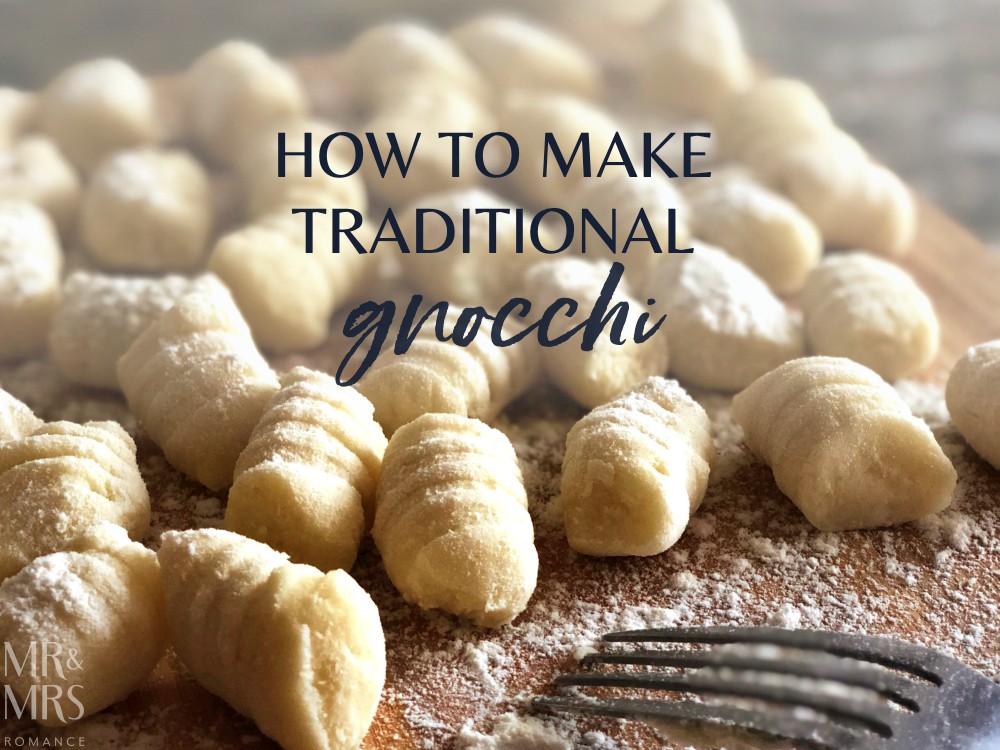 Sunsets, rainbows and a whisky masterclass

It looks like the summer’s finally leaving Sydney. Temperatures are dropping, the wind’s picking up and the days are getting shorter. The good news…