Gewurztraminer has a reputation for being a very sweet white wine and isn’t that popular in Australia. But a cold-climate ‘Gewurz’ challenges both wine lovers’ precepts and its own reputation. 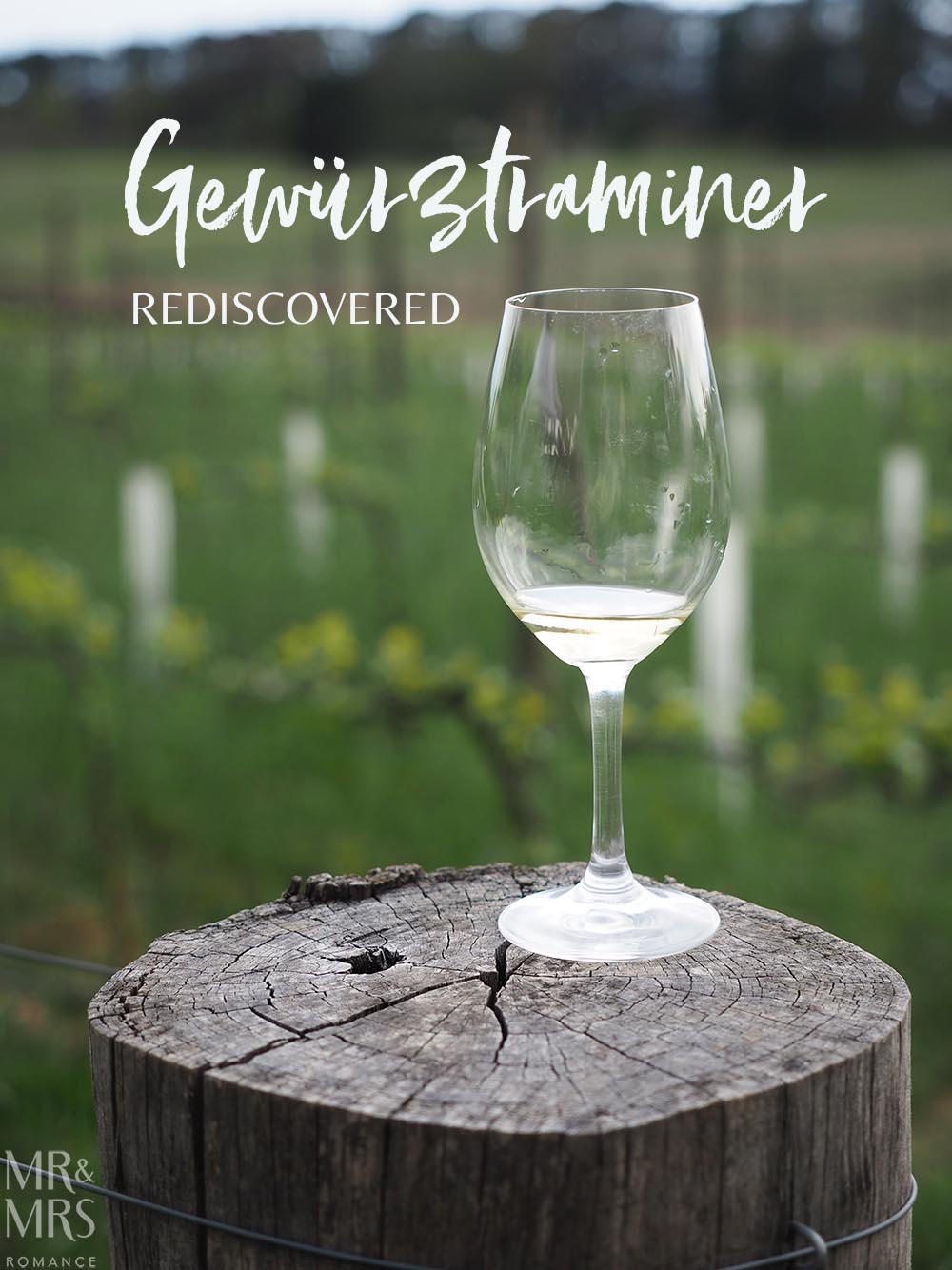 The first time I tried Gewurztraminer (pronounced “ga-verts-tram-eena”, and often referred to as just ‘Gewerz’) was in California in 2014. I was on a wine tour around the eastern vineyards of San Diego, which was actually awesome.

I spotted this long, strange-looking name on a list at one of the wineries and asked the taster about it.

The guy first enjoyed testing me to see if I could say the name (strange thing to do, but I managed to get it right, which I think irritated him a bit) before he pulled a bottle from under the counter.

The golden syrupy wine that came out made me worry a bit. The guy’s description of it didn’t do much to allay my worries.

It was cloying and overpowering. It answered my question why I hadn’t seen much of this varietal anywhere else. 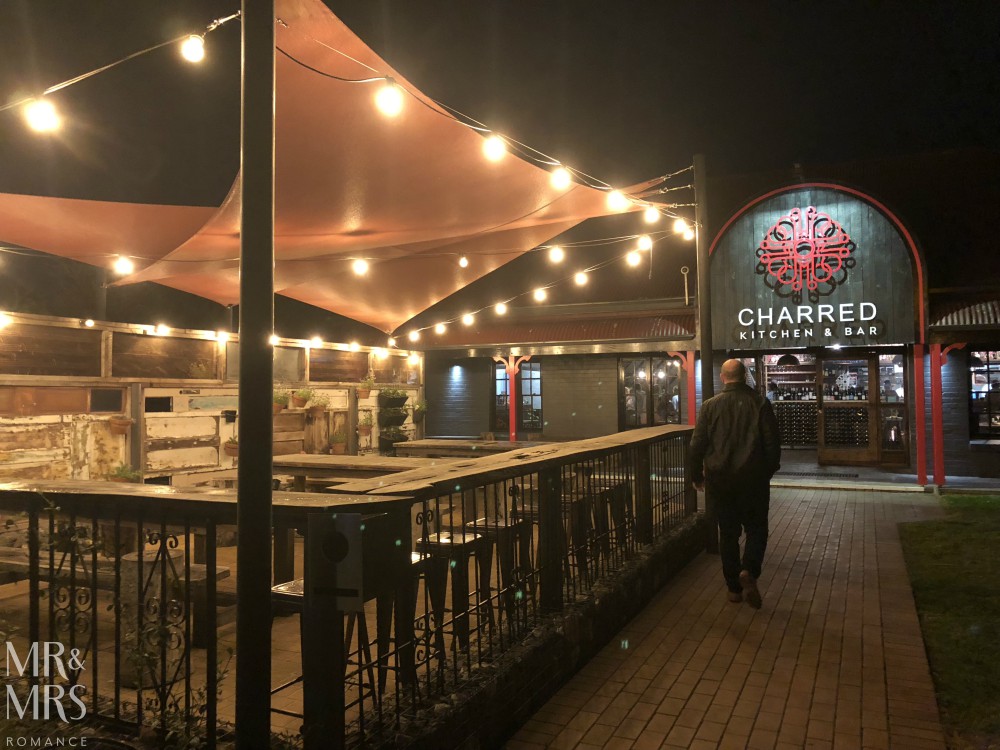 Fast forward to 2018 and a visit to Orange, NSW for the annual Orange Wine Festival.

Christina and I were having dinner at Charred – an amazing restaurant with superb food, but also with an award-winning wine list. We were lucky to have the author of this list – Sommelier and Restaurant Manager David Collins – guiding us through the wine pairings.

When David produced a bottle of Gewurztraminer, I flinched. Surely not. Not here.

After all those years of avoiding this grape and now I was having it recommended to me by a wine professional. 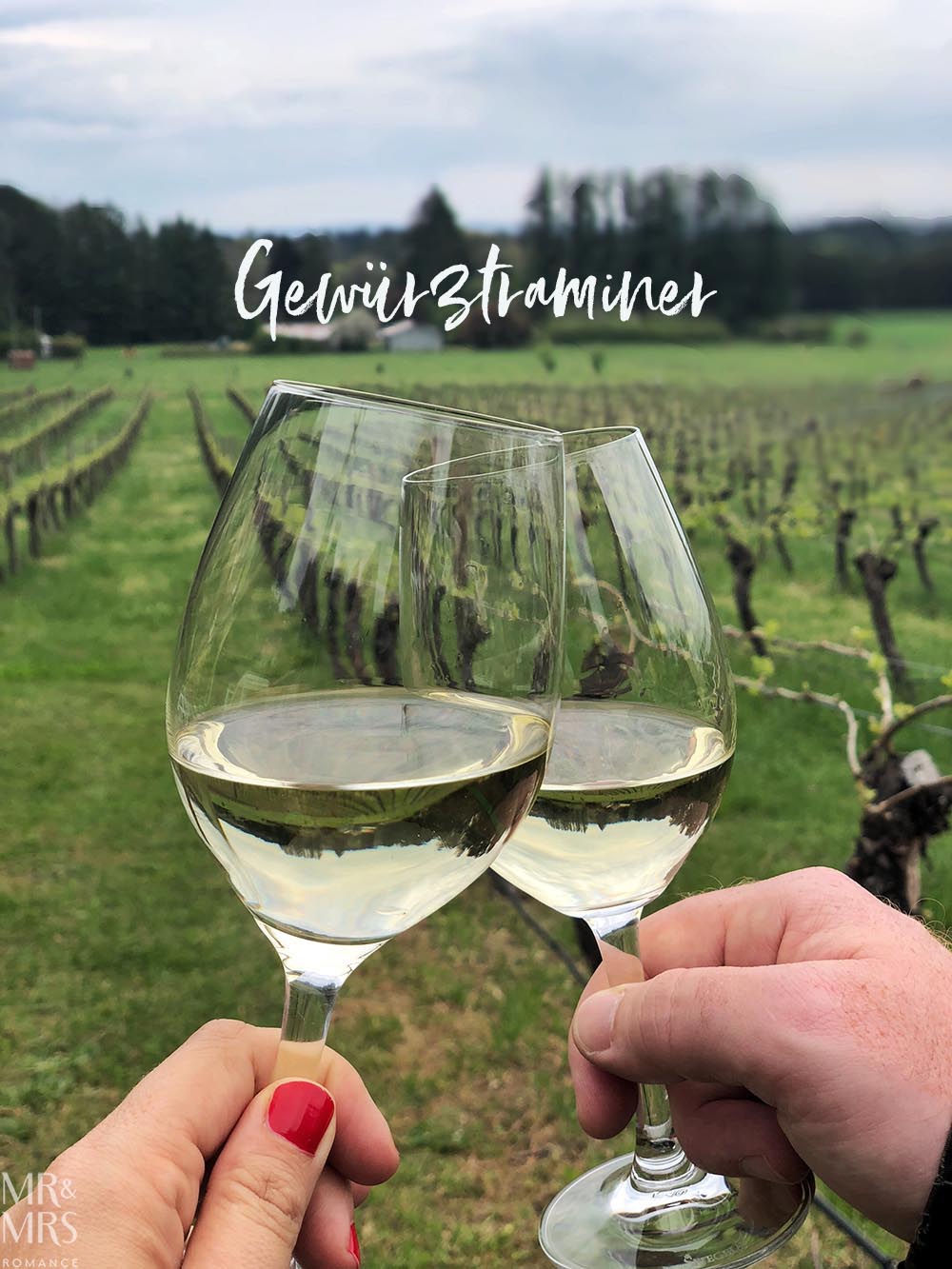 David reassured me that this Gewurz was not like the ones I’d tried in So Cal. This was an Orange wine. Because Orange is a high-altitude region, its wines are rarely as sweet as warm-climate wines as a rule.

Having relatively cool nights means acids like malic and tartaric acid remain in higher quantities. These acids are ‘digested’ by grapes in warmer temperatures to create sugars, which creates sweeter wine.

The Gewurztraminer grape’s origins are from colder parts of Germany and the Tyrol Region of northern Italy; cold climate wine regions. It’s also a relative of Sauvignon Blanc, so there will always be a sweetness and fruitiness to the wine.

The difference is how the sweetness is balanced.

Here’s what David has to say about Gewurztraminer, plus some recommendations:

“Gewürzt, in the Australian market, is probably really misunderstood. It has suffered a major identity crisis at the hands of the sweet wine drinking market.

“Because it can deliver quite lifted aromatics – rose water, lychee, turkish delight, dried apricot – it can be very appealing, add sugar (don’t ferment the wine to dry) then you may as well have yourself a different flavoured vodka cruiser.

“It is wonderful to have standout aromatics and that is exactly what we see from both Toppers and Colmar estate. Both however finish dry with wonderful mouth-watering acidity. [You can read more about these two wines a bit further down – ed.]

“Those elements make it a wonderful food wine and able to cut through richer dishes, while having that unusual nose on it. I personally love attacking blue cheese and pumpkin with Gewurzt. If there is a little sugar in it then also some funky Asian inspired dishes can be a wonderful complement as well.”

David’s recommendations for other Gewurztraminers

“I would also get yourself to a Dan Murphy’s and see if you can track down a Family Hugel Gewurzt from Alsace – wonderful expression from Alsace. I don’t ‘shop’ too much for wine these days – I end up at industry tastings quite often and try to identify Gewurzt(s) with those characteristics previously mentioned.

“For skin contact whites I would have flutter with names such as Logan’s Clementine series, Blind Corner, Xabregas and a stunning one (if you can get it out of South Australia) Whistler Back to Basics.” 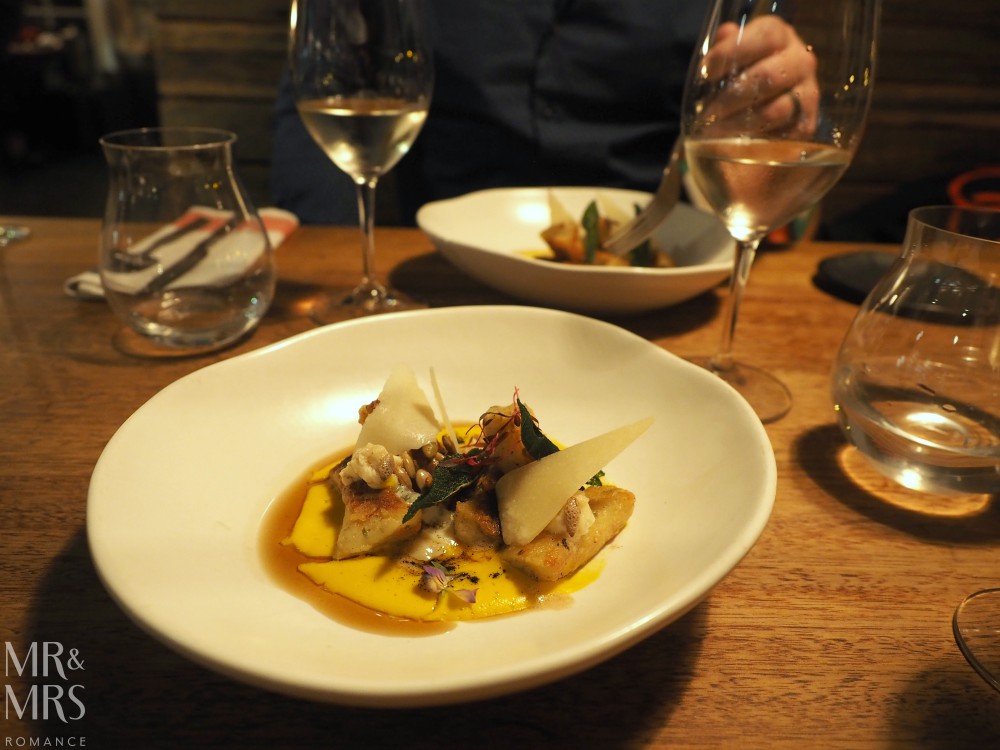 Back at the dinner table, David produces a bottle of Colmar Estate’s Gewurz. The aroma is still sweet and floral, reminding me of my time in Southern California, but the taste is sublimely dry.

The sweetness of the pumpkin and sage goes perfectly with the wine’s sweet bouquet, while the richness of the herby buttery gnocchi and the cheeses dance with the Gerwurz’ sharp minerally palate. 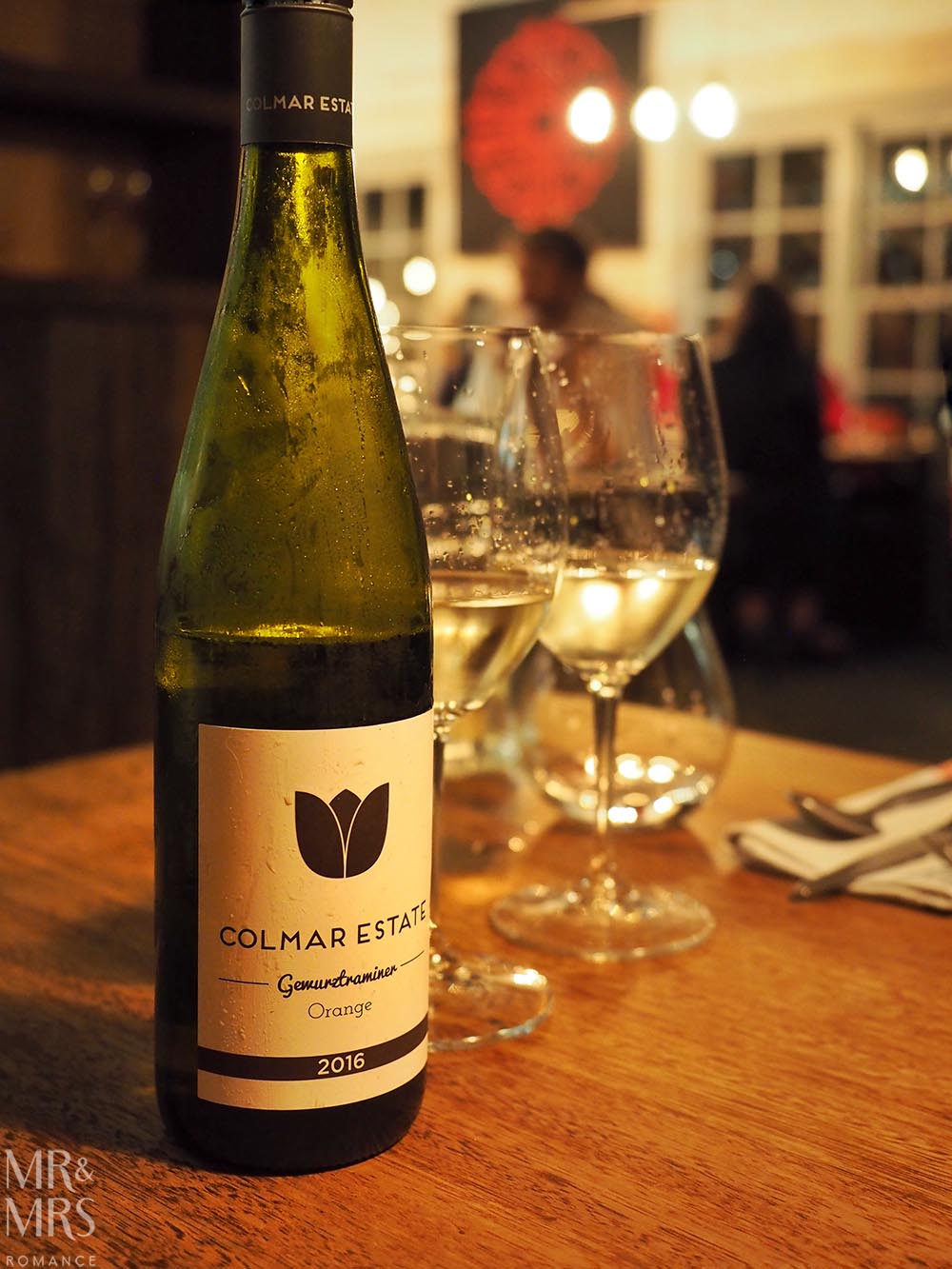 After the entrée, David returned.

“Want to try something cool?” he asked.

I suppose we should have been more alarmed than we were when David asked a question like that, but we trusted him.

Moments later, he returns with a bottle of Topper’s Mountain Gewurztraminer. We haven’t heard of this one before. It’s a winery from a place called Tingha about 550km north of Orange.

It’s also a cold climate wine region, much like Orange, and Topper’s Mountain is home to the eponymous single vineyard at a lofty 900m. 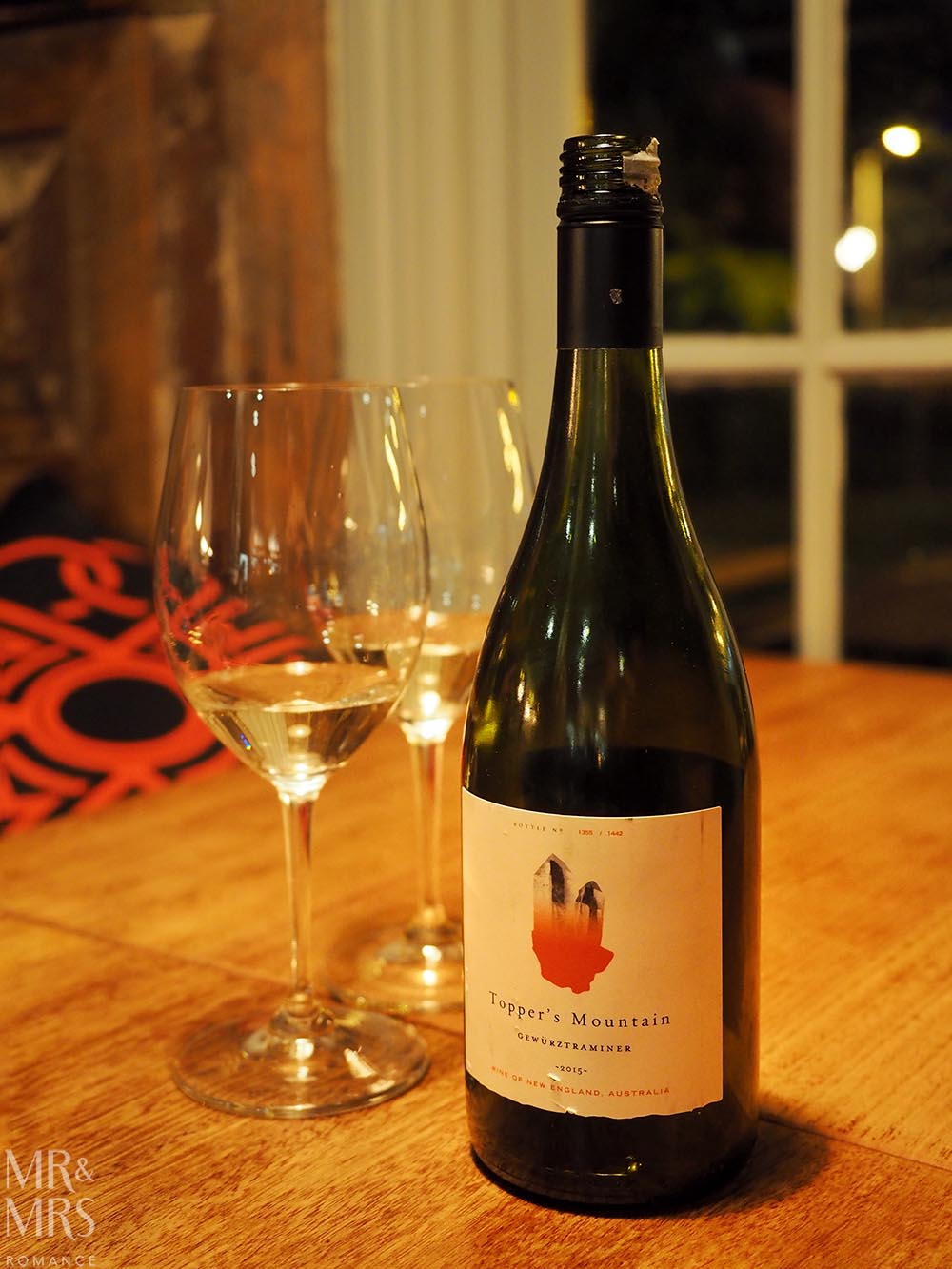 This Gewurz is different to the Colmar Estate. On the nose, it’s much sweeter. Turkish delight, candy floss and lavender breathe up our noses, but when we sip, we taste herbaceous rosehip, sharp lychee and that minerally acidity that is polar opposite to what we can smell.

After our meal with David at Charred (make sure you get yourself to this awesome restaurant by the way), we have our eye out for more Gewurz while we’re in Orange. At our very last wine tasting in the beautiful cellar door of Swinging Bridge Wines, we’re given some of wine maker Tom Ward’s experimental range.

The Amber rosé #003 is a Gewurztraminer, Pinot Gris, Riesling blend, and is cloudy because it’s unfiltered. It’s a beautiful wine, with the sweet scent of the Gewurz leading you on to take just another sip.

The fine cloudy sediment gives the wine a gentle, cushioned texture, and the flavours of the wine stay well after the glass is empty. It’s a very smart wine. 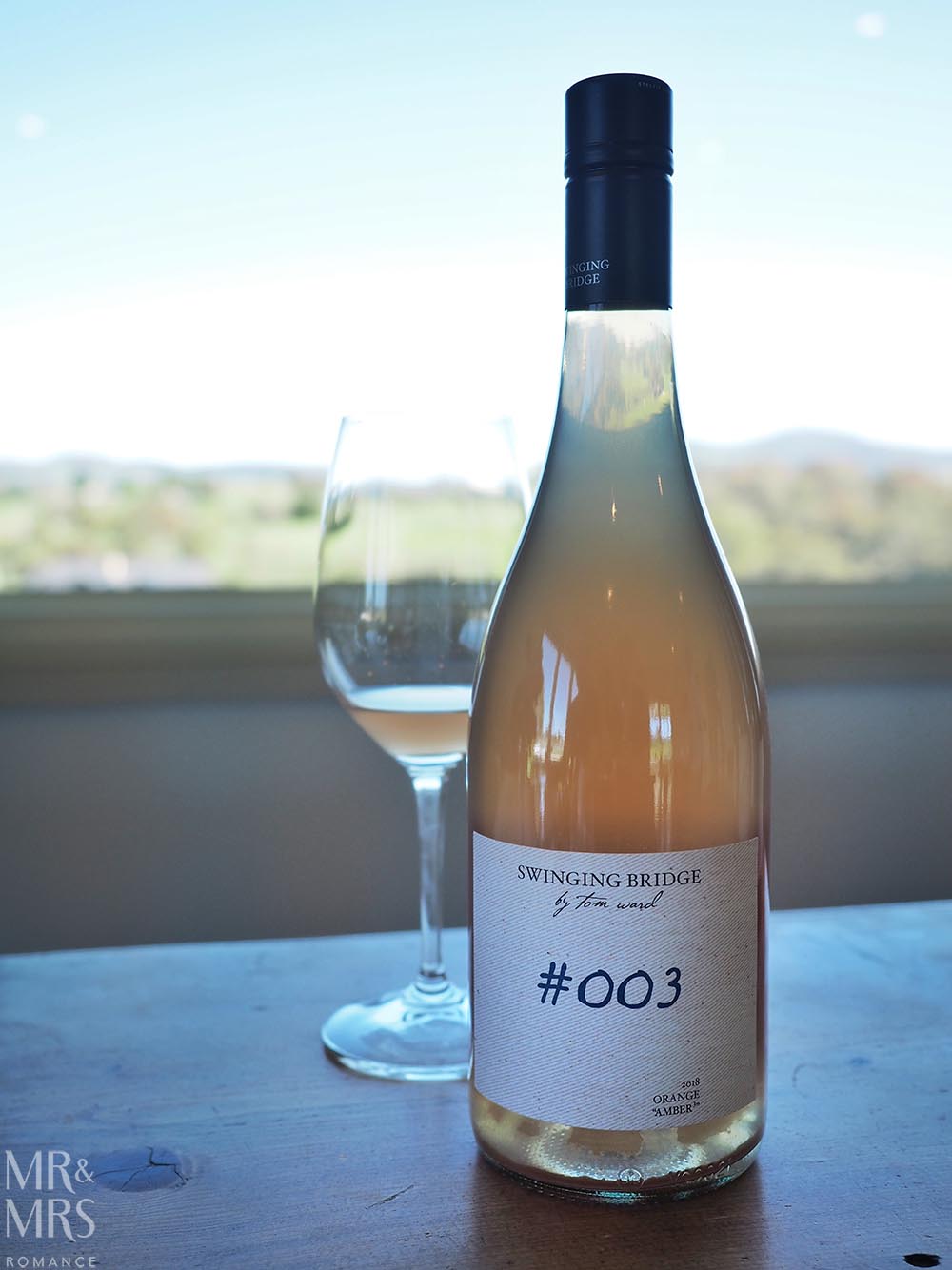 This German grape, championed (and ruined for us) in America, has finally found a home here in rural Australia. What a journey it’s been on.

There are other regions in Australia and in New Zealand where the climate’s cool enough to get the best out of this ancient varietal.

I’m just glad we’ve found at least one place where Gewurz makes sense – and where its vintners can make mastery.

Have you tried Gewurztraminer? Is there a wine that you promised you’d never drink again but found somewhere that made it beautiful? Tell us in the comments! 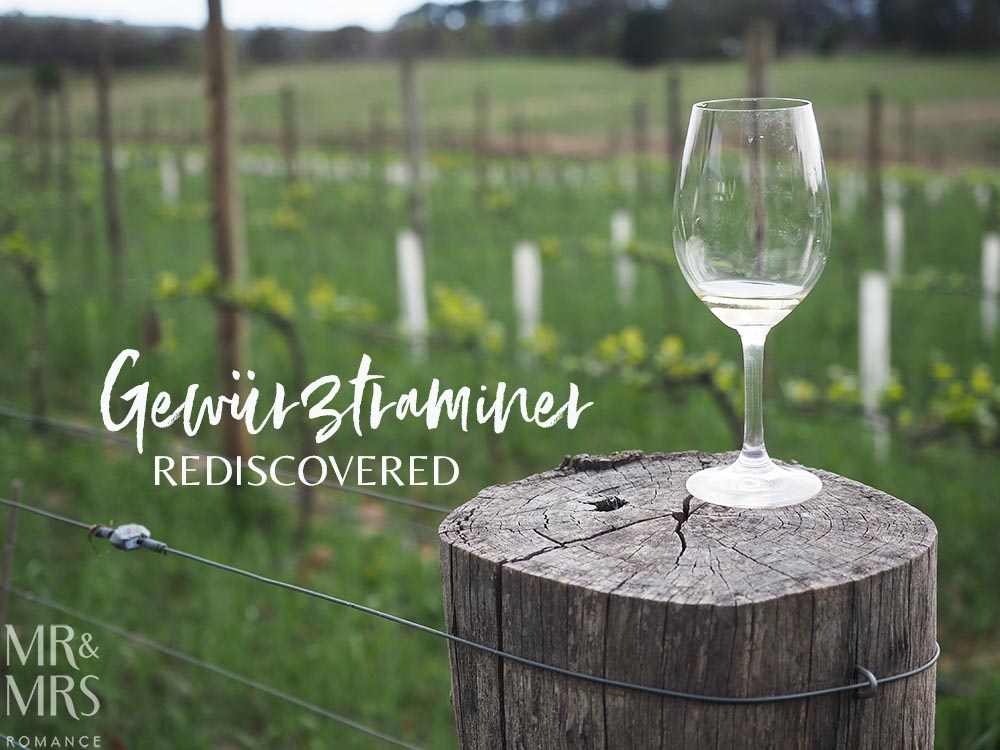 wine of the monthWine review

Which is older – St Albans or London?

Of course, everyone’s heard of London, but not everyone knows St Albans. It’s a beautiful historic town just north of London, and in this…