Everyone knows that Cuba’s most famous product is its cigars. But not many know how Cuban cigars are made. Crafting a perfect cigar is an artform, but to see it done, you have to visit a cigar factory in Cuba. 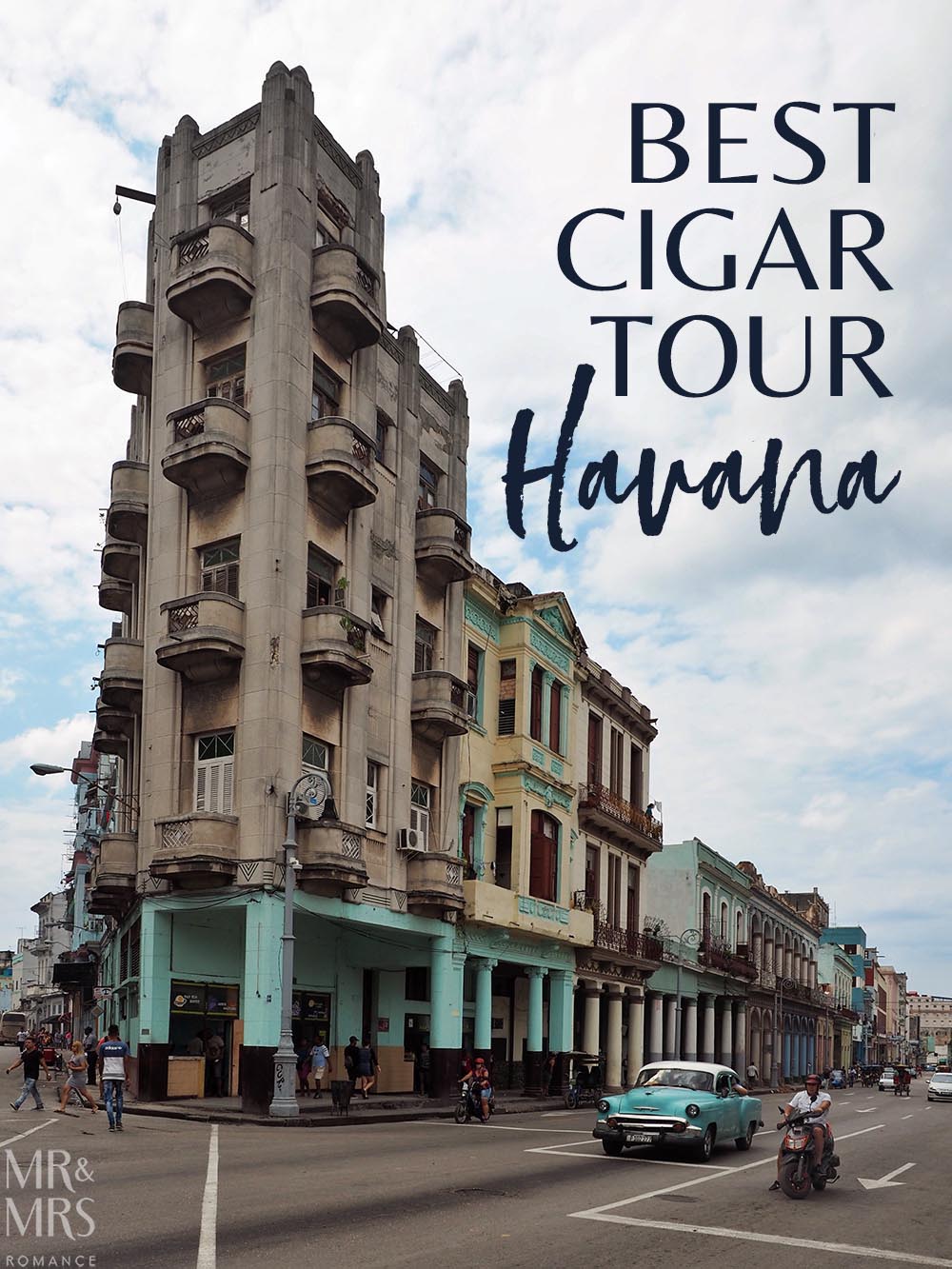 The words ‘Cuban’ and ‘cigar’ go together so naturally, don’t they? It’s the perfect collocation. But for some reason the words ‘cigar’ and ‘factory’ are quite jarring.

I think it’s perhaps because ‘factory’ is the wrong word. To me, a factory suggests unskilled labour, mass production and machine automation.

And none of these elements exist where these premium Cuban cigars are made.

Here’s our video of our time on the Cuban cigar tour in Havana:

On our recent trip to Cuba, Christina and I booked a tour of a cigar ‘factory’ in Havana. Well, it was more like a cigar experience really. 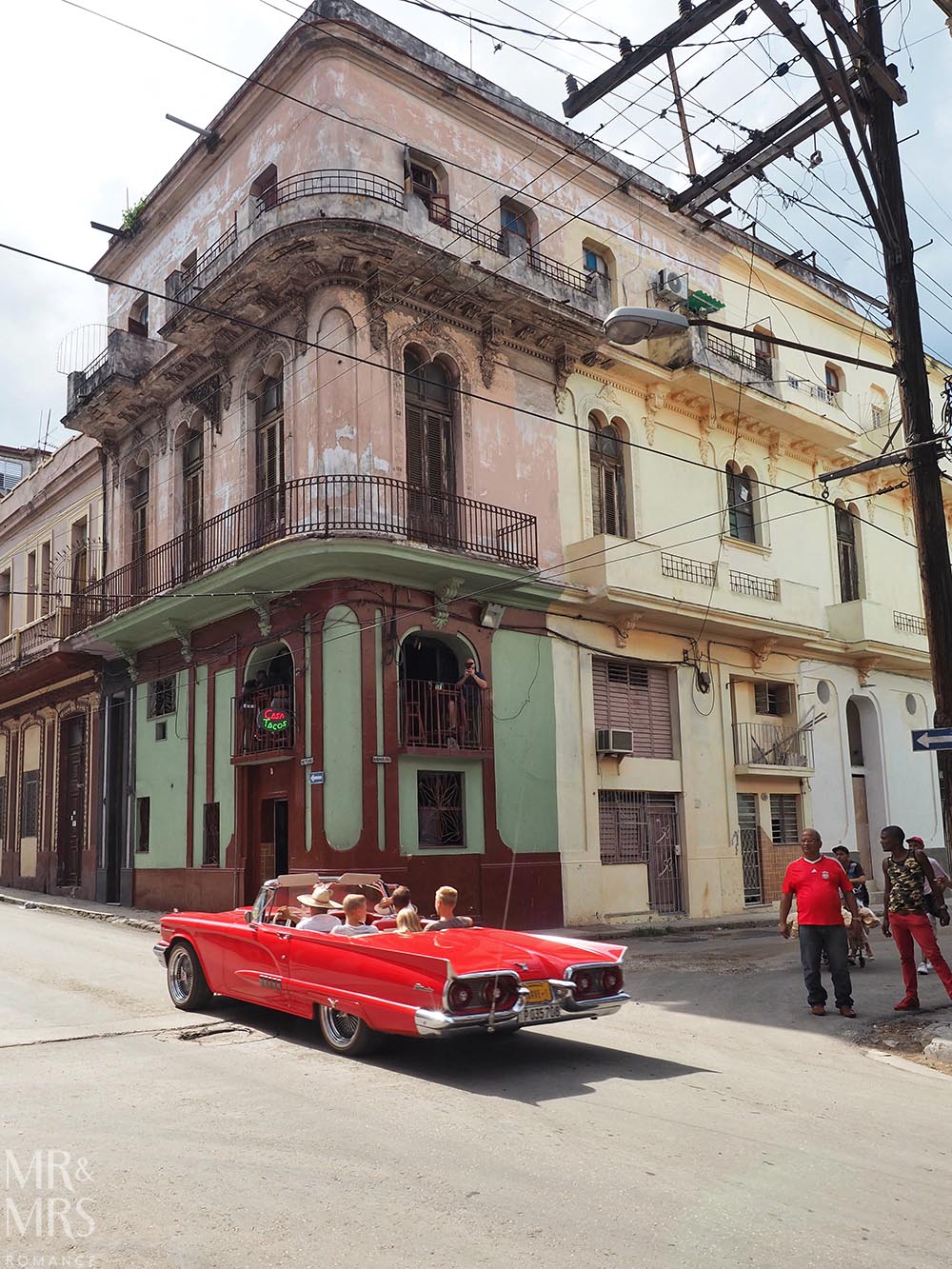 We booked our Cuban cigar factory tour and experience through Cuban Adventures’ Cuba Tours site, an awesome tour company that specialises in small group or private tours in Cuba. We’ve worked with these guys in the past on a longer trip around Cuba.

They organise it all for you; you just need to turn up. But they also give you freedom to explore at your own pace. There’s no ‘follow the umbrella’ going on here. 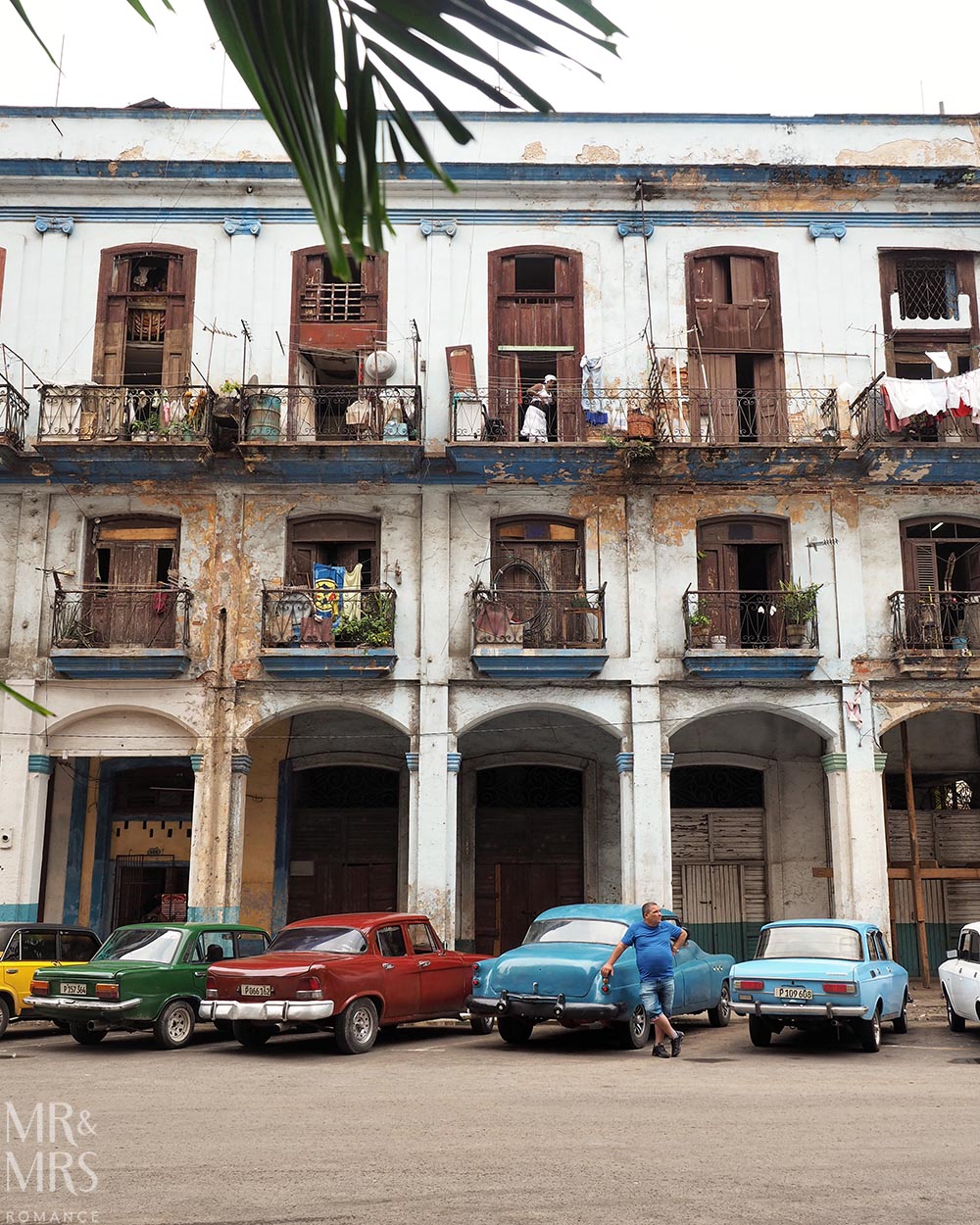 Part 1: Arriving at the cigar factory

Our guide Frank picked us up from our casa particular in a classic American car, which was awesome. Driving through Havana in one of these cars is so cool. But knowing we were heading to a real cigar factory made it even better. 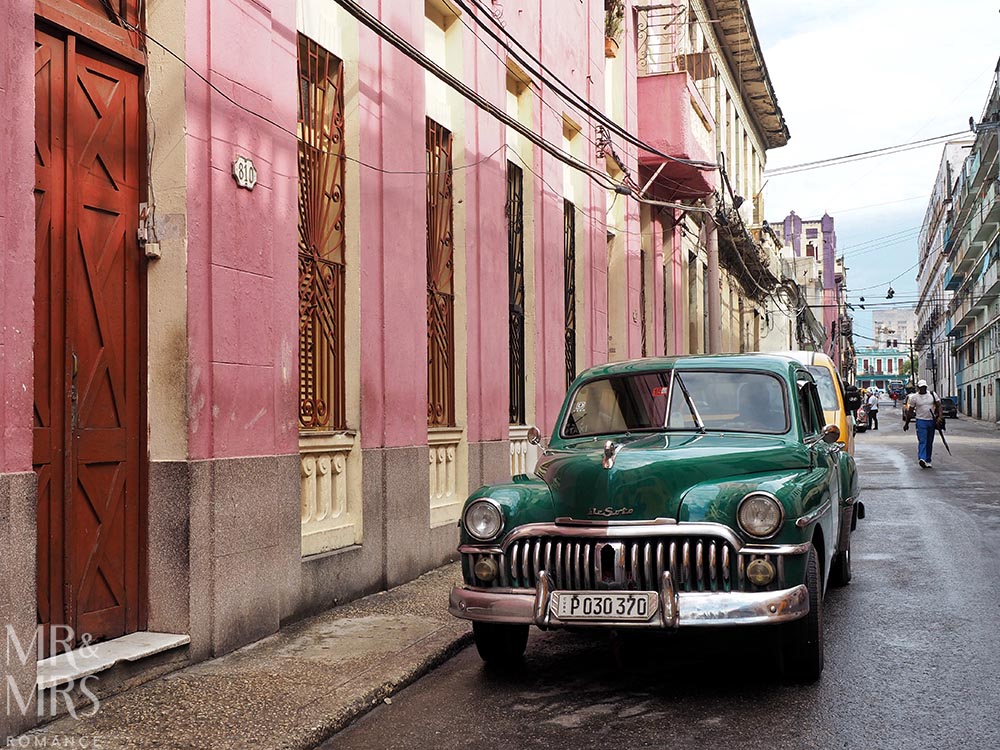 I’m even more excited because the factory we’re going to is Partagas – one of my all-time favourite cigar houses.

Through the grand archway and under the vaulted ceilings of the factory entrance, Frank told us he would wait for us in the lobby; a Partagas employee was to take us around the factory.

He also explained that, apart from in the lobby, we weren’t allowed to take any kind of recording; no photos, no video, no audio. 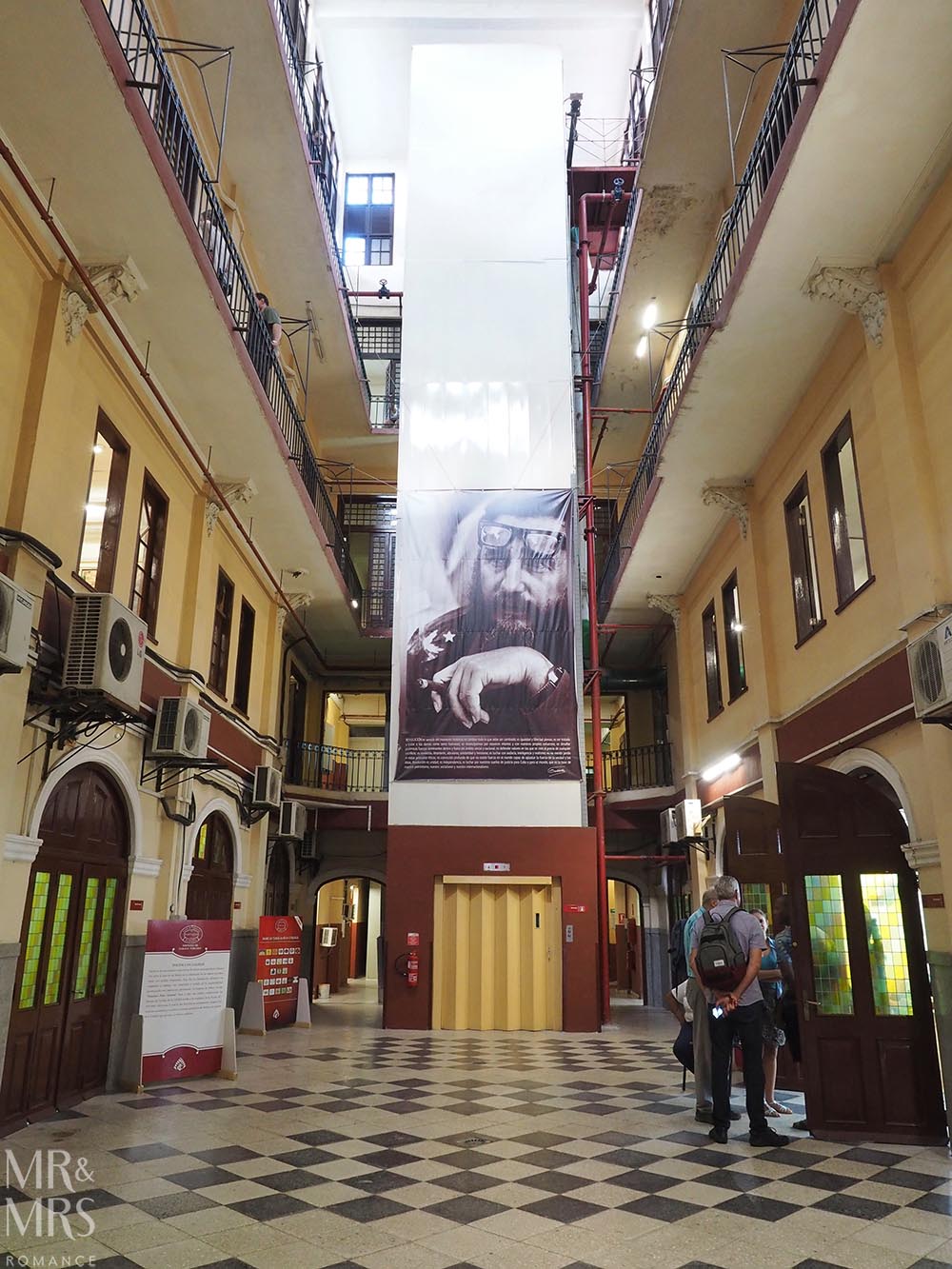 On the ground floor, through an open (but guarded) door, was a room full of young locals sat at rolling desks.

Frank sidled up to us and explained that this was a kind of ‘academy’, and these were apprentice rollers, practising. The apprenticeship takes at least 9 months and they are paid just USD10 per month.

We weren’t allowed to take photos here either, hence the security guard.

Our factory guide arrived and led us up 4 storeys on what felt like the back stairs to the building. 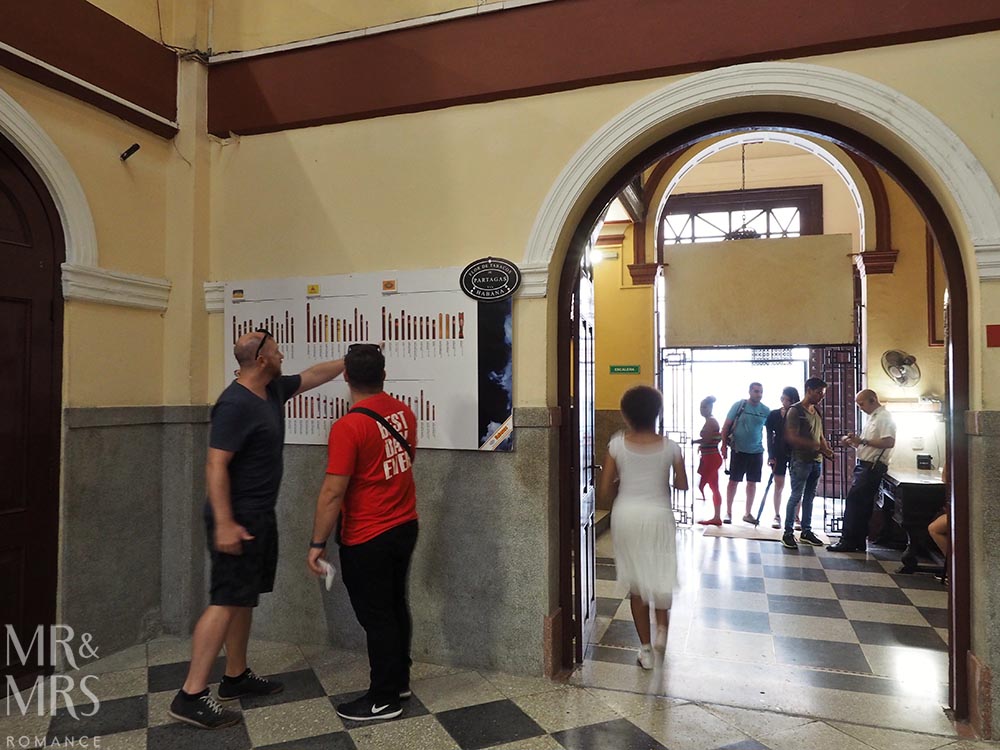 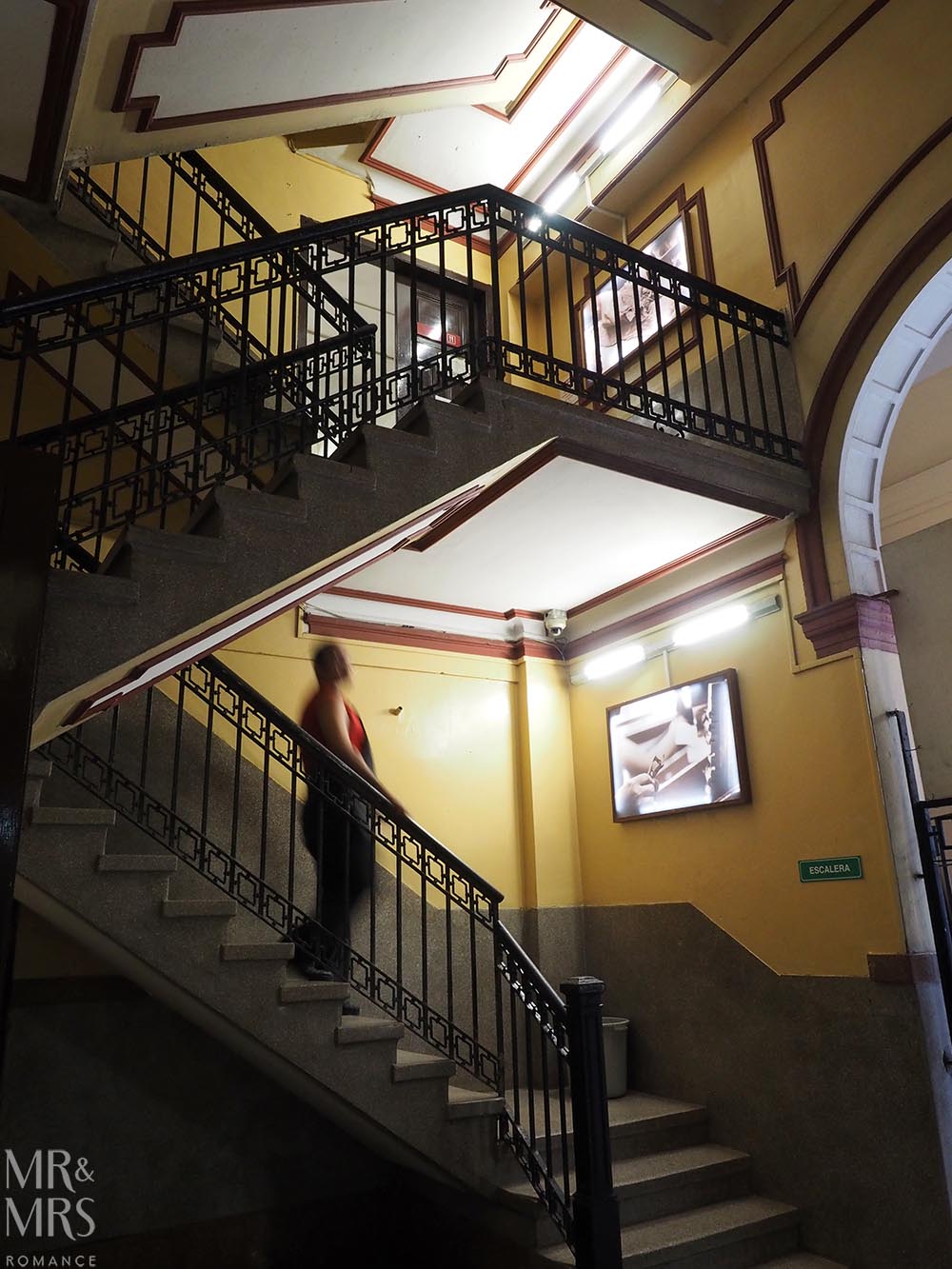 As we climbed up the different levels of this giant workshop, we caught glimpses of storage rooms full of cigar boxes, people working on things, inspecting boxes.

I got an inkling of what Charlie Bucket must’ve felt like when he explored Willy Wonka’s chocolate factory.

The sorting room on the top floor was where staff – usually older women – graded the different leaves for the cigar wrappers. This is potentially the most important job. The wrapper, which goes on the outside of the cigar, has to look perfect and is made of one single leaf.

These women sit and remove the thick vein from the middle of the leaf then sort it according to its colour, size and quality.

There is also a room for sorting the finished products. Each vitola (‘model’ of cigar) can be sorted into 7 different colour grades, so each box is consistent. Boxes of cigars are also opened randomly for sampling. 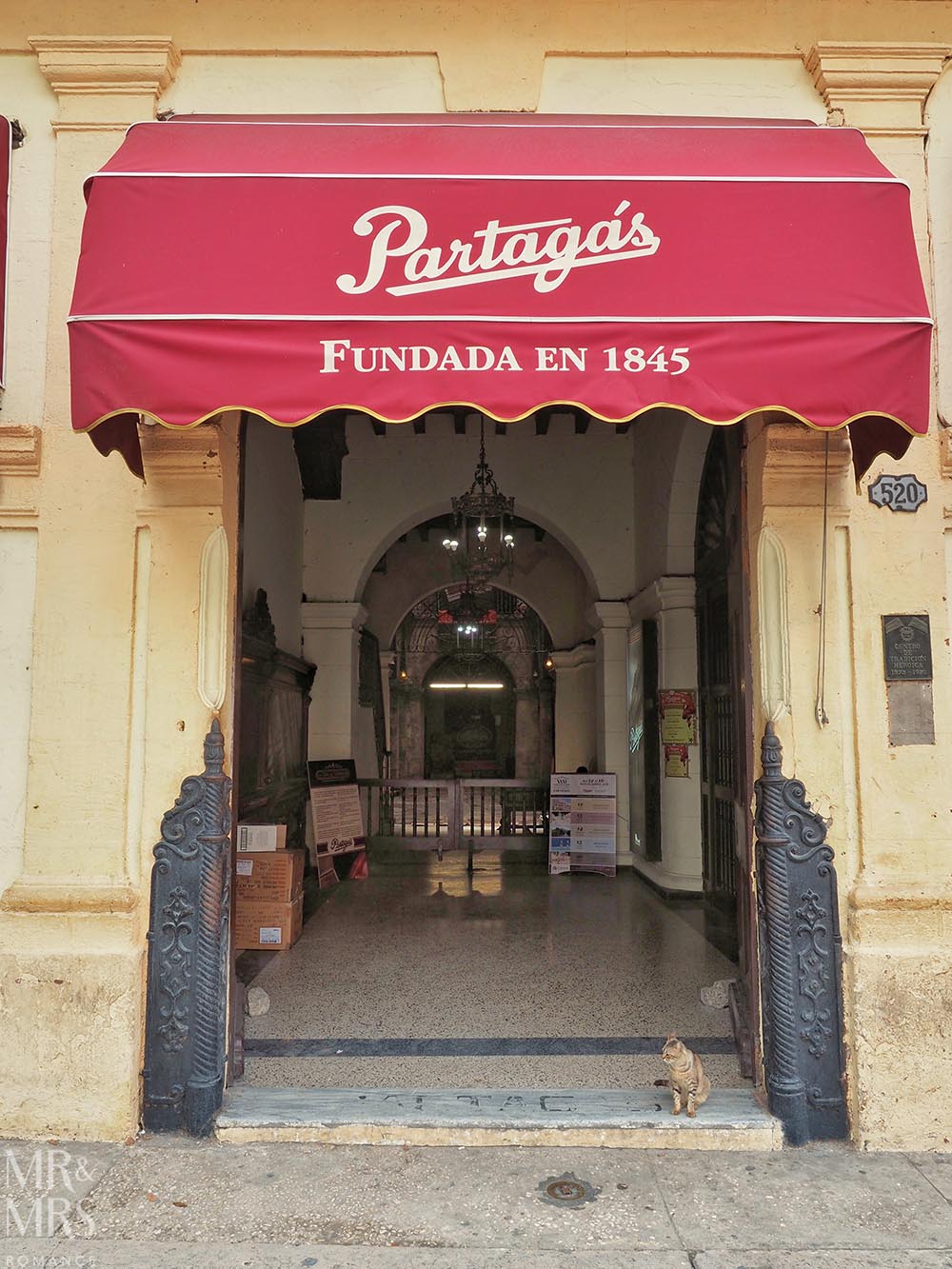 This is the old Partagas factory, which is now a museum and shop 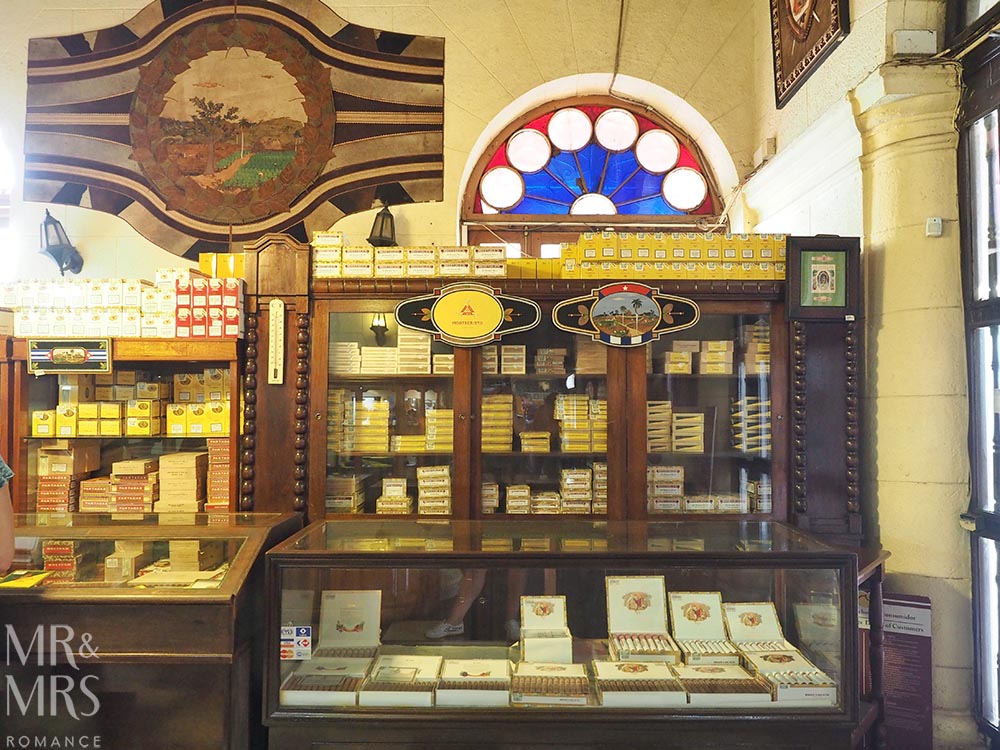 This is the room everyone comes to see, where the rolling happens. In a long, wide room, rollers – mostly younger people – sit at wooden rolling desks and work their craft.

Each cigar is made, from beginning to end, by one person. They put three different types of tobacco leaf into the filler (the core of the cigar) at different ratios depending what type they’re making. 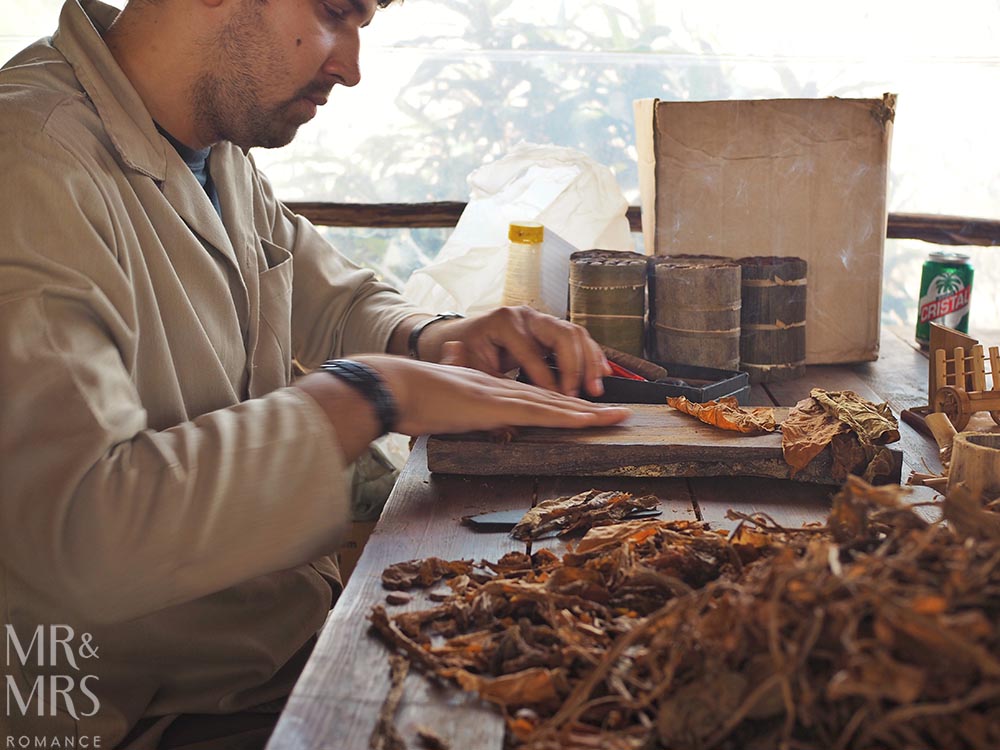 We weren’t allowed to take photos of the rollers. This was taken in Viñales on a tobacco farm

The rollers (known as torcedores) then put a binder leaf around that to hold it together, then the pristine wrapper. They also glue a cap to one end using a flour-and-water paste. Each cigar goes into a special press before it’s assessed for quality.

It must be exactly the right length, shape and thickness. Partagas alone has over 30 different types of cigar and each one has different parameters. The skill involved in being able to craft these cigars is remarkable.

And at such speed.

As a rough average, each roller can make around 8 cigars an hour.

Finally, we saw the boxing room, which is mostly staffed by older men. This is where blank boxes are transformed into the finished product, all by hand.

Labels are glued on with the same stuff holding the cigar caps and their beautiful collar labels on. Cigars go in, along with sheets of wax paper, authenticity labels and a sheet of raw cedar.

The whole process is incredible. 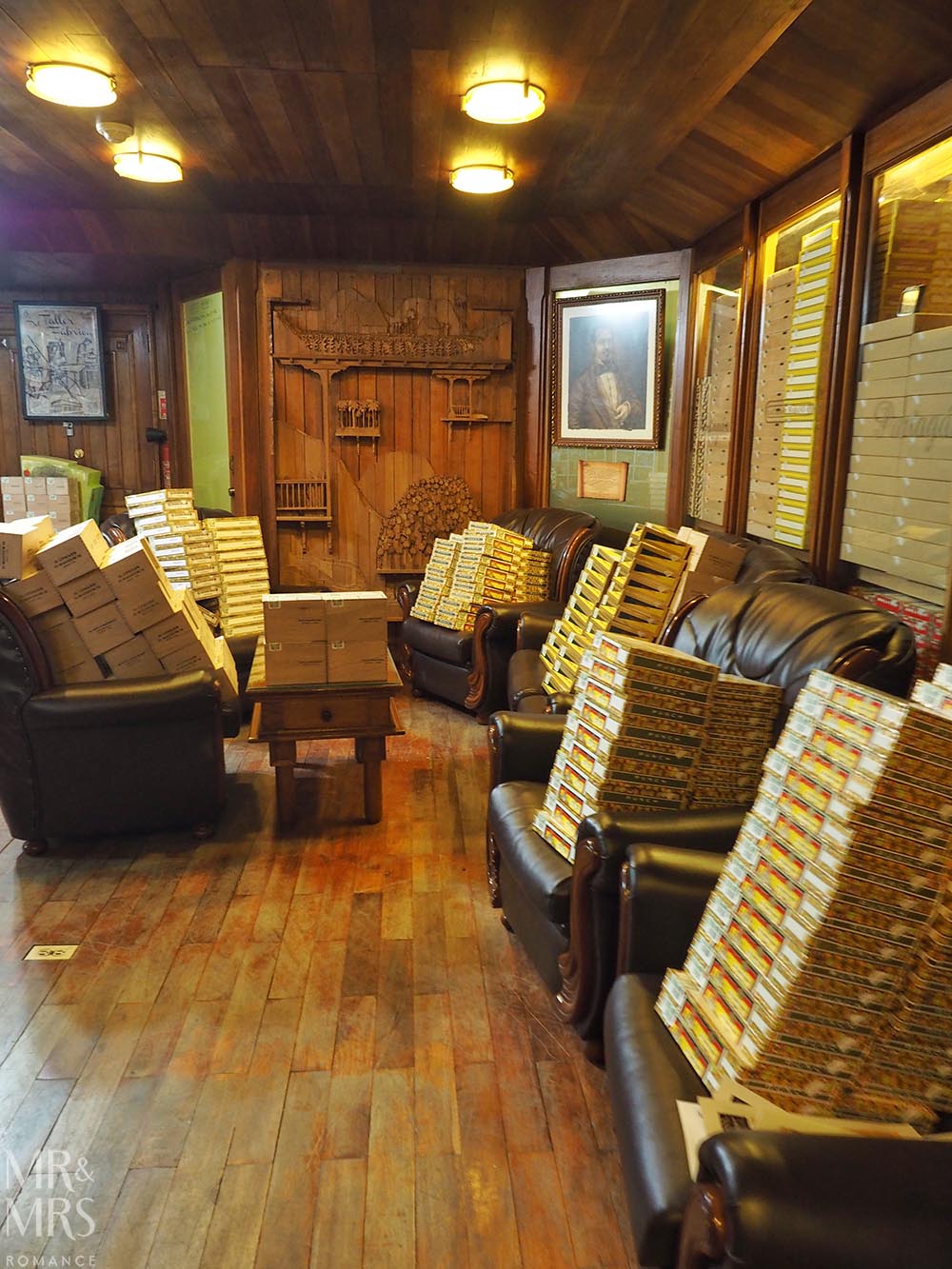 This is the VIP room of the Partagas shop. They were in the middle of restocking! 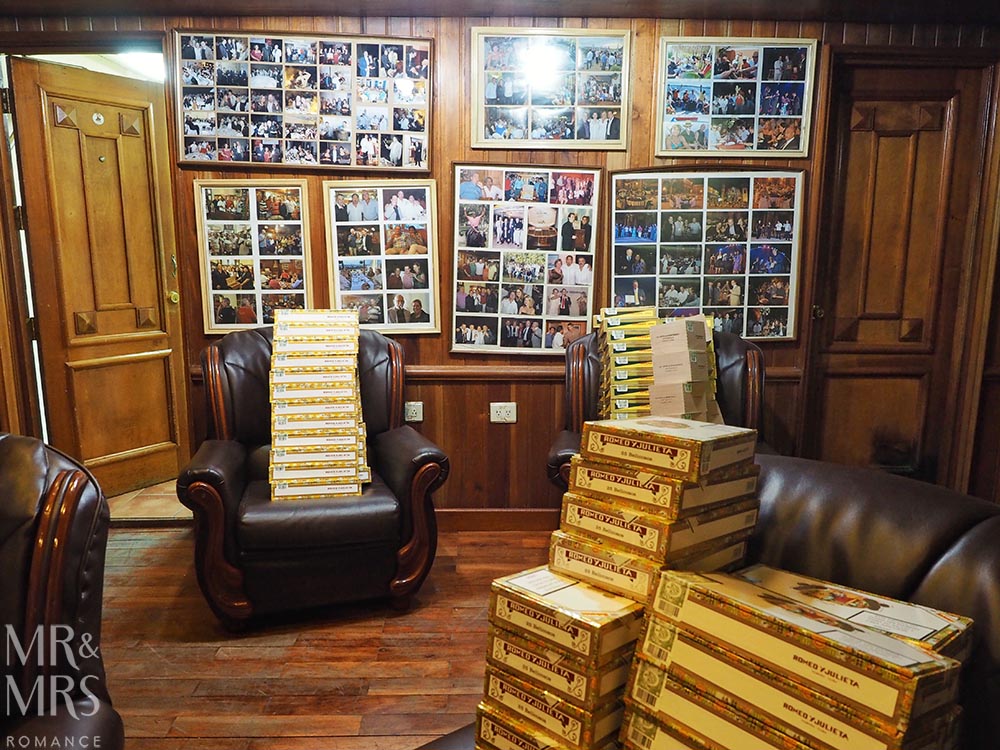 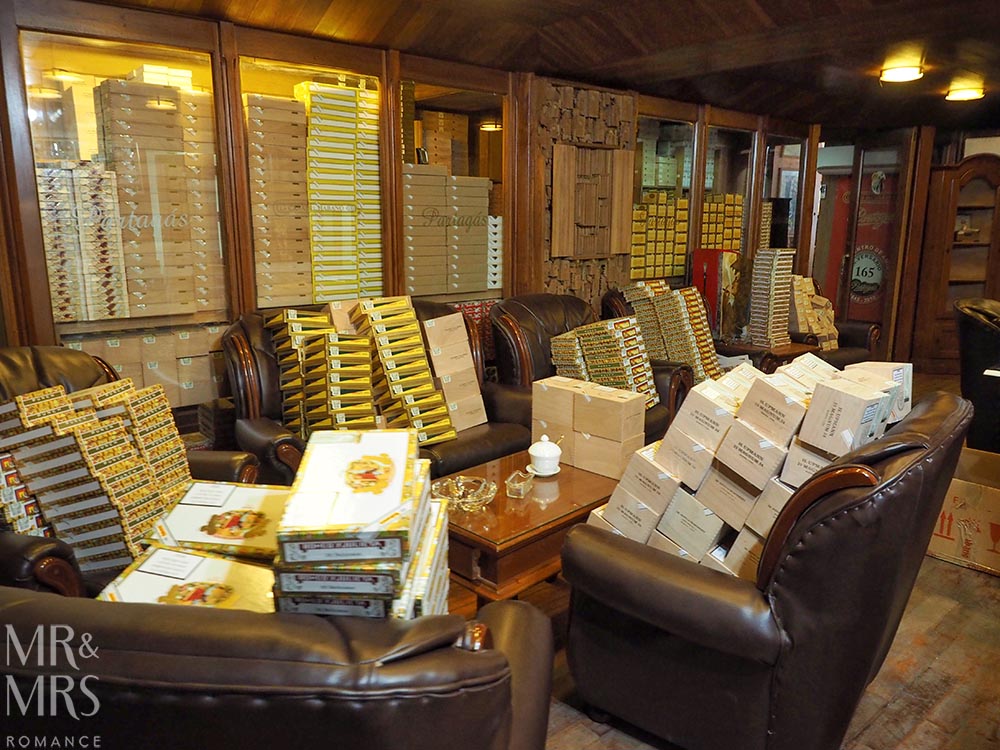 Our guide also gives us some stats to think about as we go round:

This factory alone (there are 5 more just in Havana):

– Rollers make between 60-80 cigars per day.
– Rollers earn USD50-60 per month. Locals consider this to be a good wage.
– Each worker receives 5 cigars per day as a bonus. 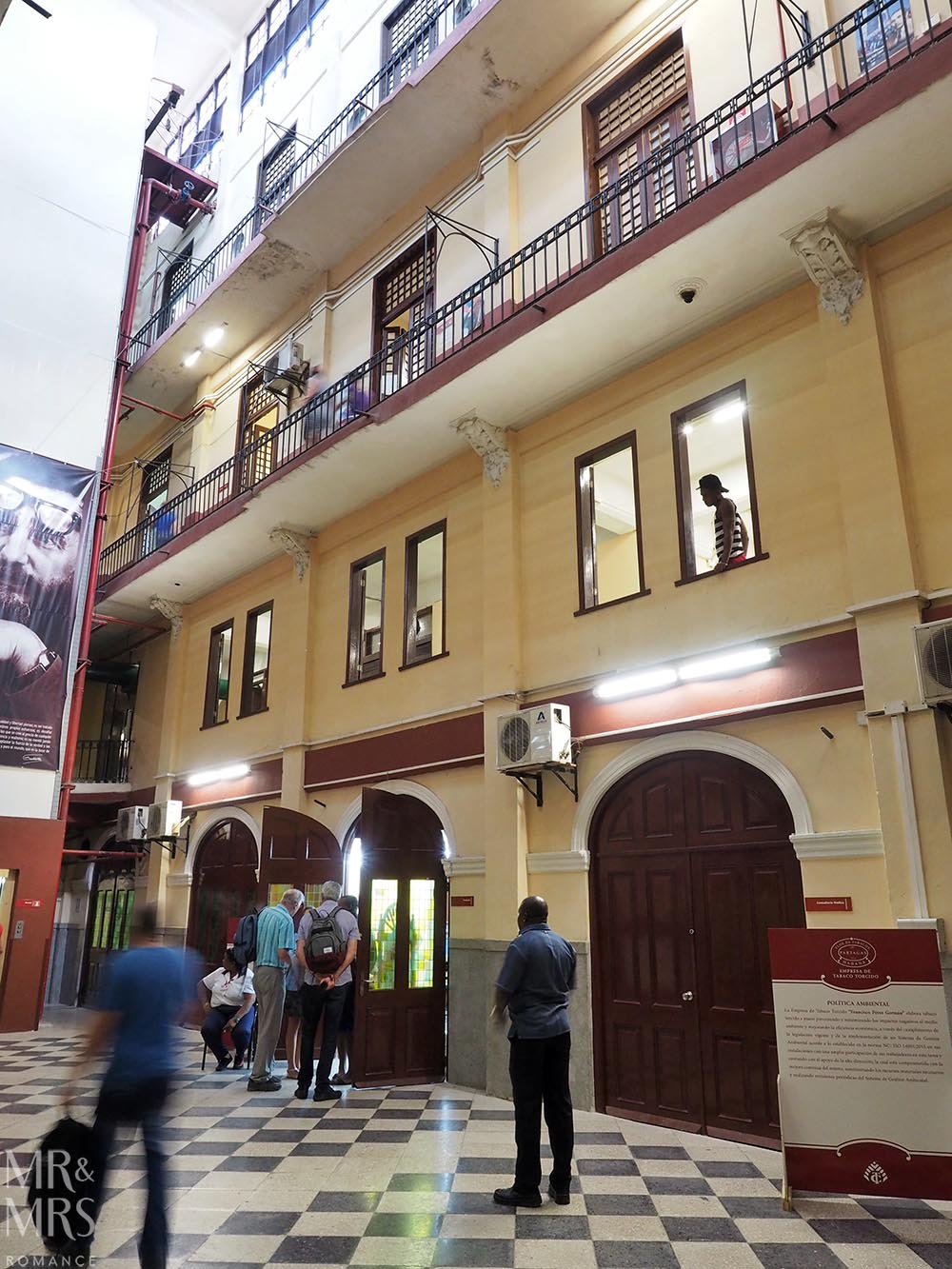 After the cigar factory tour, we got back in the old American car, which takes us and Frank back towards the coast for the ‘Maridaje’ – the ‘marriage’ or traditional pairing of a Cuban cigar with Cuban coffee and Cuban rum.

Within the verdant courtyard of the Palacio O’Farrill – a beautiful period hotel that was once the home of a prominent sugar don – we sit down to a cigar lesson.

The hotel’s cigar sommelier meets us and takes us through the ‘marriage’ of a pure Cuban cigar (locals refer to them as ‘puro’) with an espresso coffee and a golden rum. It’s a fine marriage indeed. 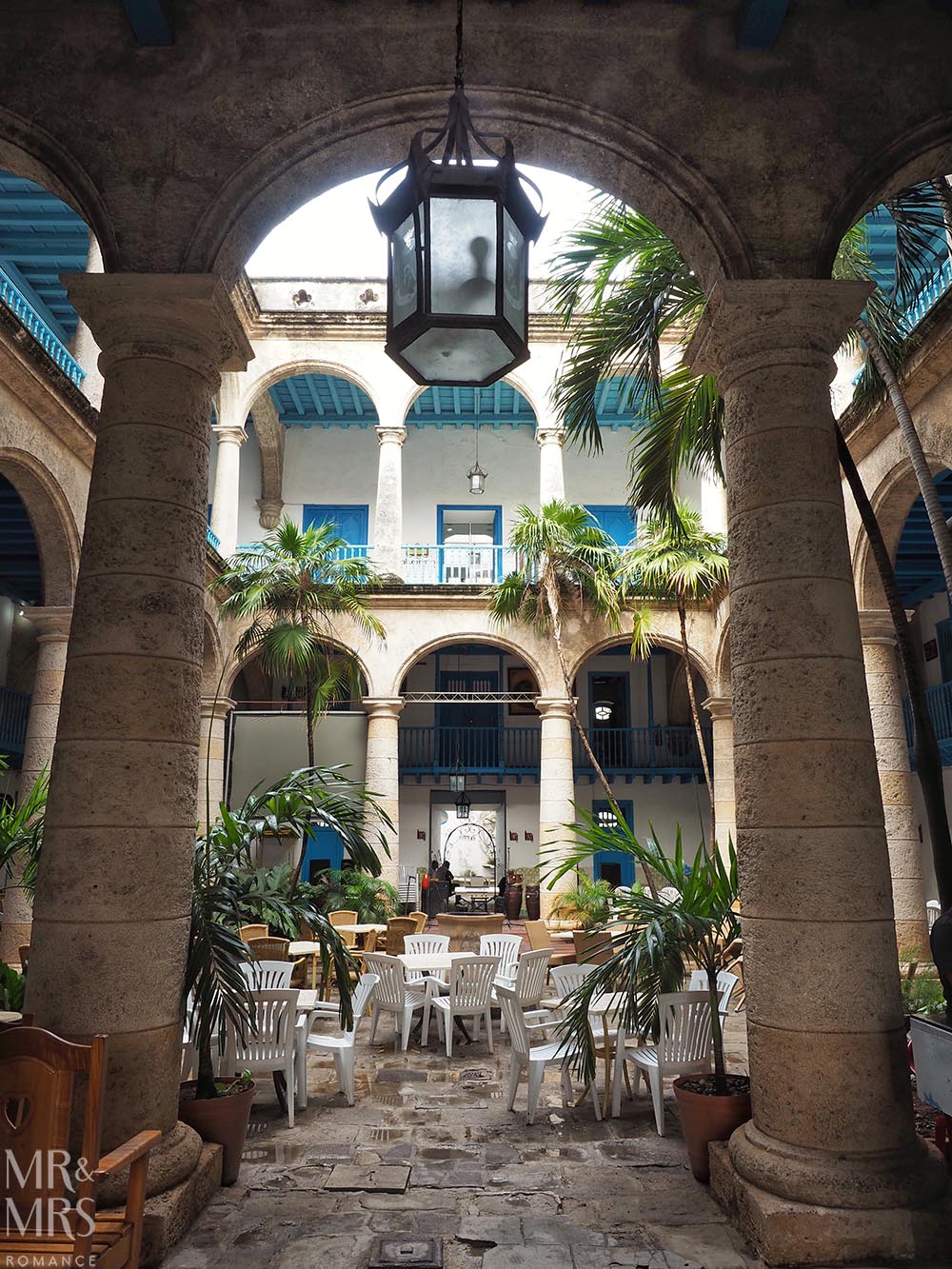 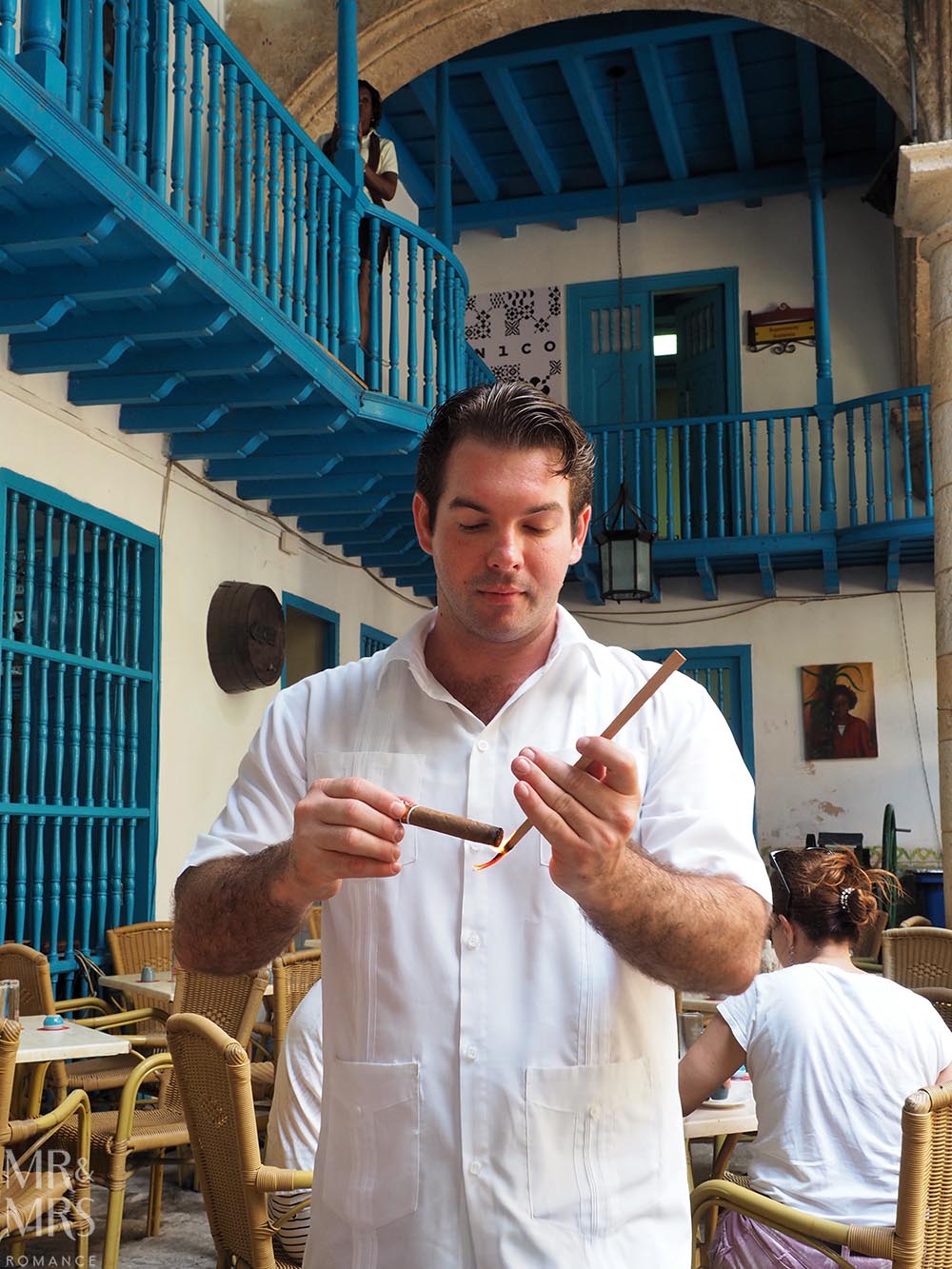 He also shows us how to light a cigar correctly, using a shard of the cedar sheet you find in every cigar box (never a lighter or just a match) and ‘toasting’ the foot of the cigar before you light and smoke it.

Of course, this masterclass includes the coffee, rum and the cigar. 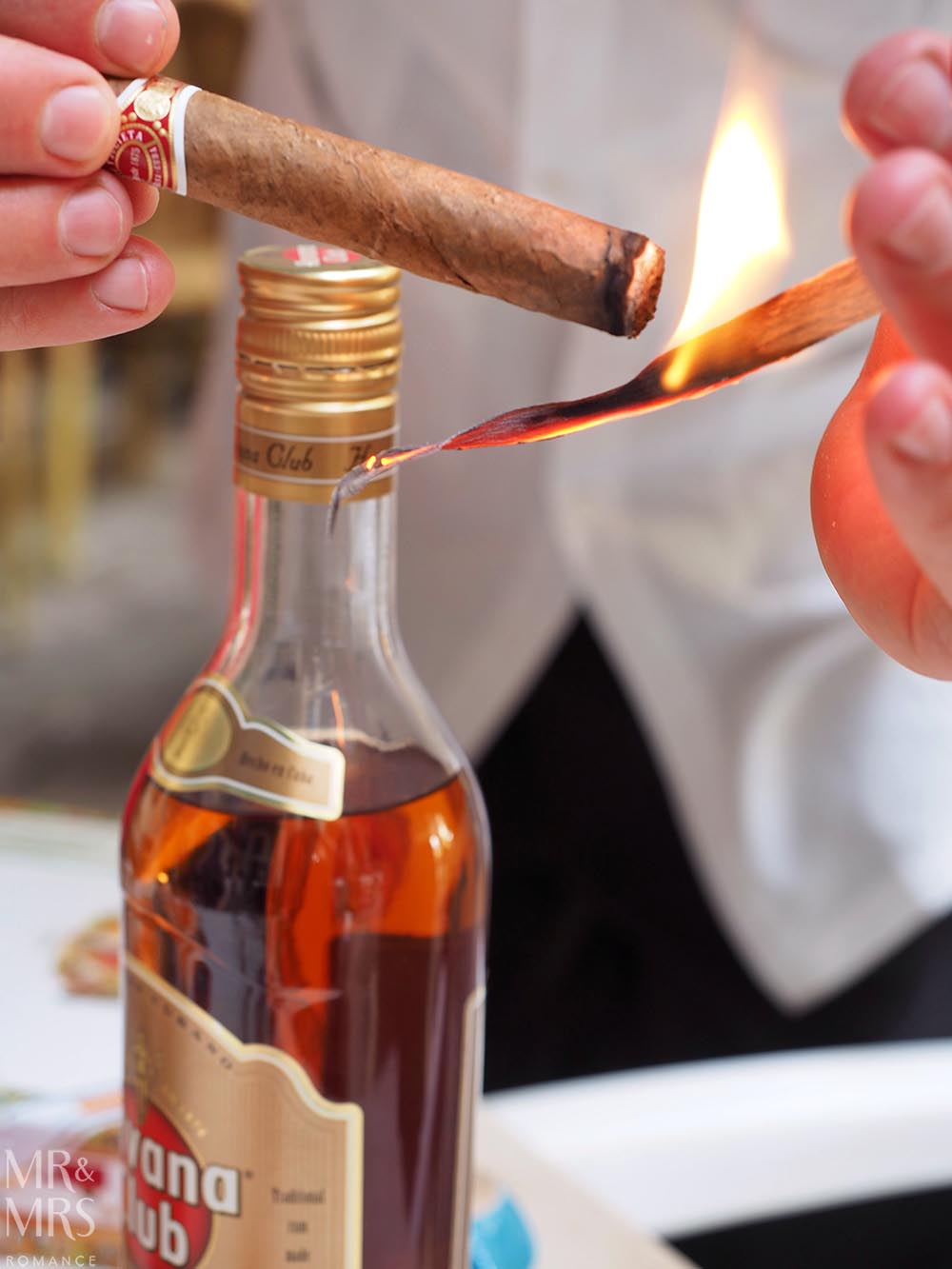 Also part of the Palacio O’Farrill is a beautiful cigar shop selling many of the finest vitolas from the best cigar houses in Cuba. Make sure you’re not buying fake premium cigars by shopping in these government-run shops*.

You can usually tell if a shop or restaurant is government-run if there’s an electronic till and credit card reader. Local privately-owned stores won’t usually have this kind of tech. 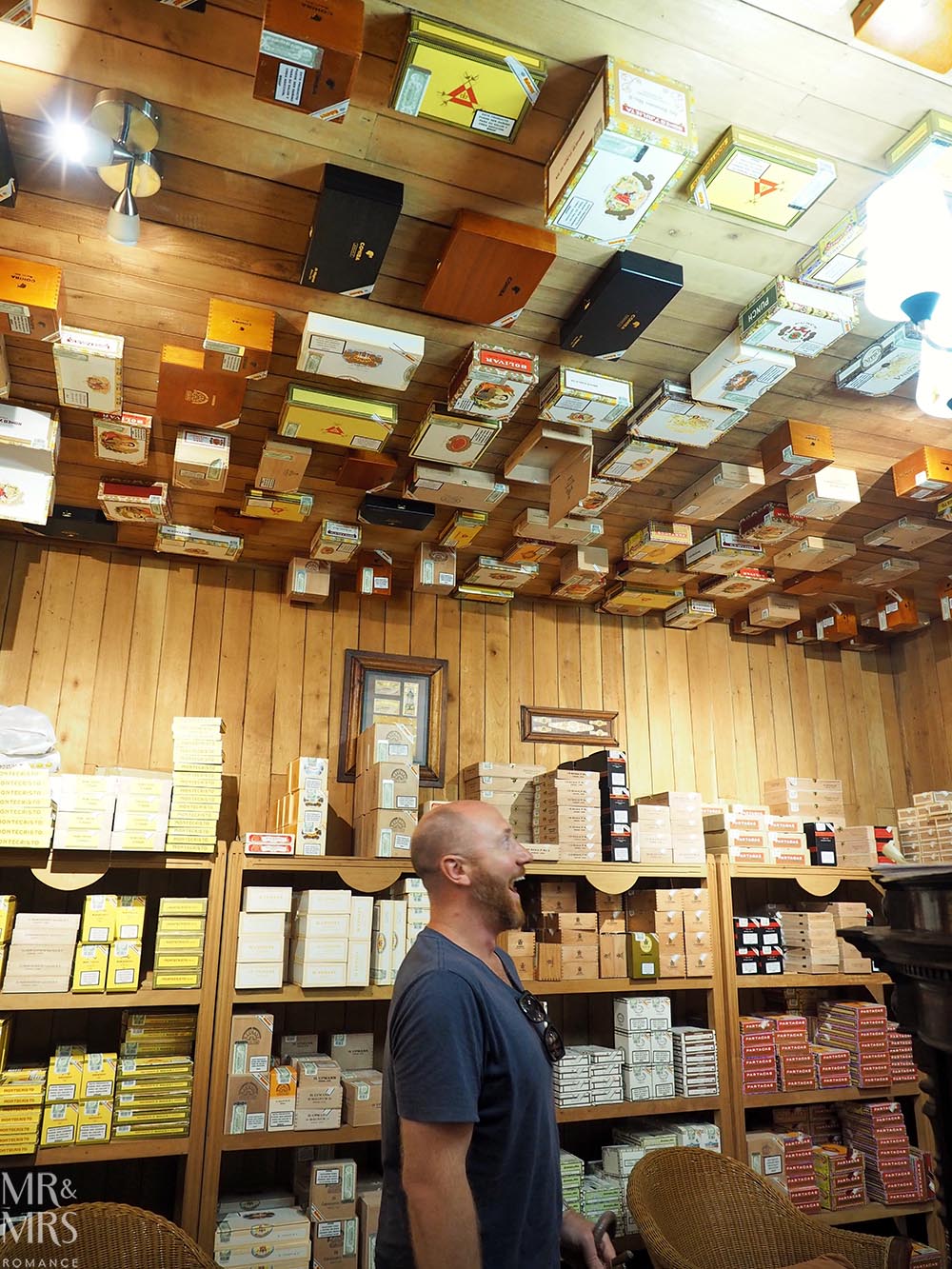 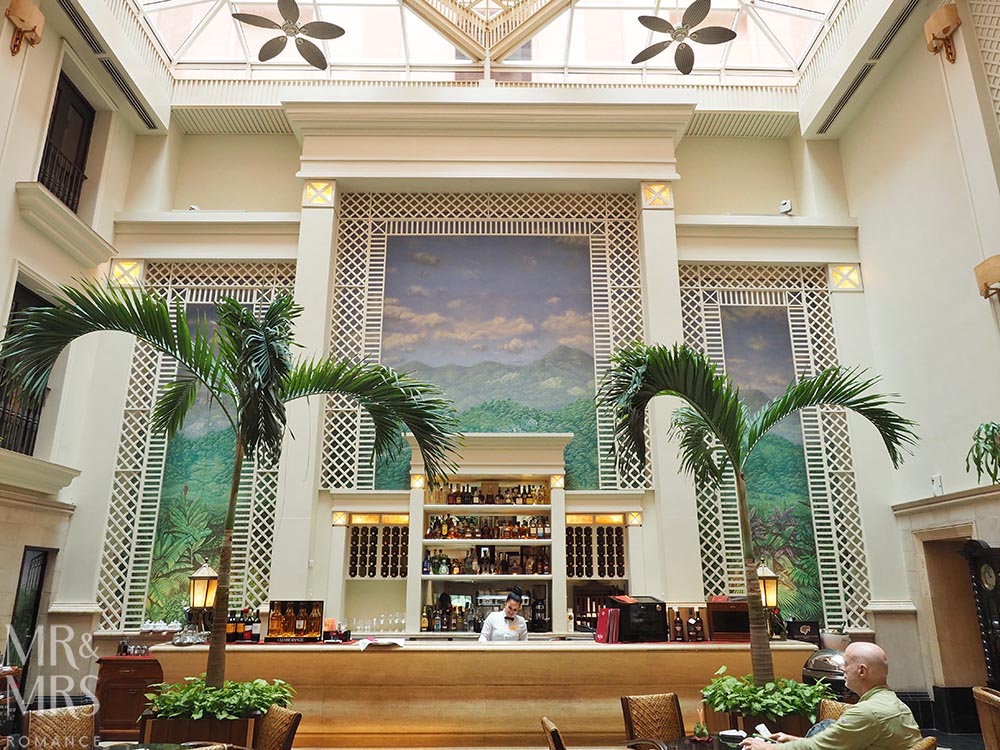 *Ordinarily, we’d recommend avoiding the government-run businesses in favour of supporting locals, all of whom are working hard to make ends meet. But if you want to make sure the cigars you’re paying a premium for are real ones from the proper cigar houses, the only places you can guarantee authenticity are the government-run stores.

A walk into Havana Vieja took us to the cigar museum. It’s full of fascinating cigar-related artefacts, from long-dead cigar house labels and lithographic plates to Fidel Castro’s own cigar box humidor and ancient tribal statues of tobacco gods.

The cigar museum is in the heart of Havana Old Town, but it’s tucked away and surprisingly hard to spot. It also has erratic opening hours depending on how long the excellent ladies running it feel like staying open. 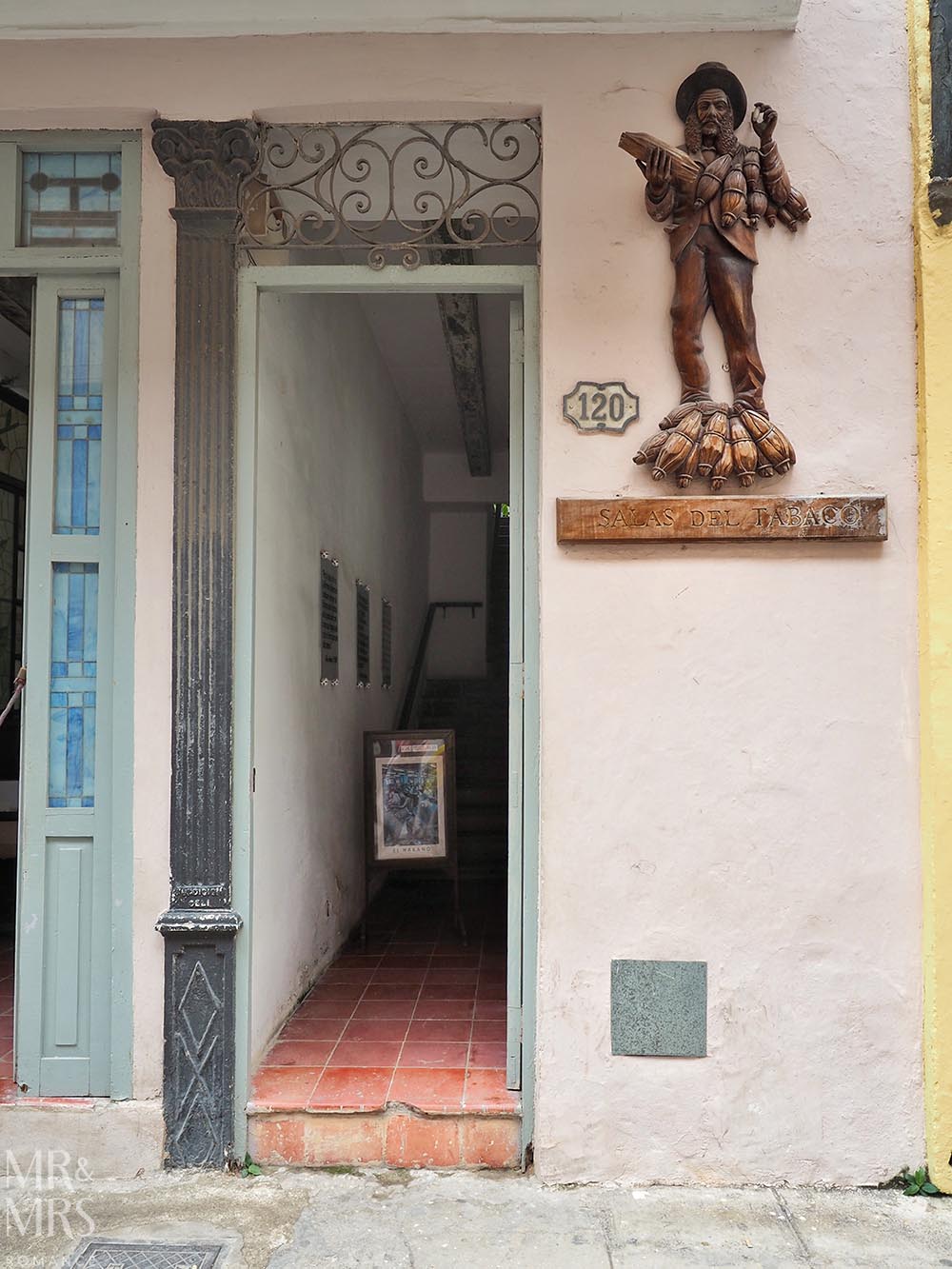 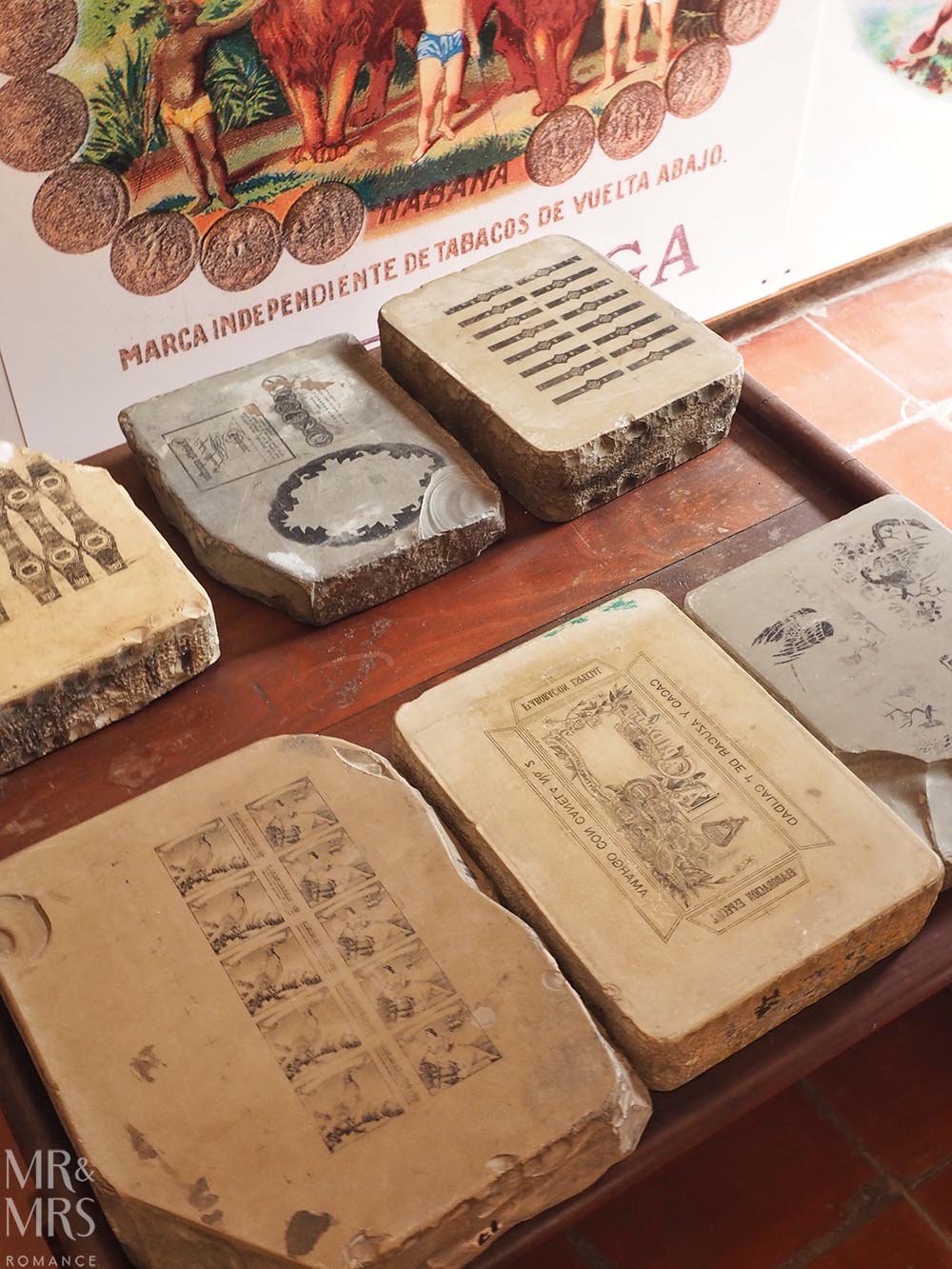 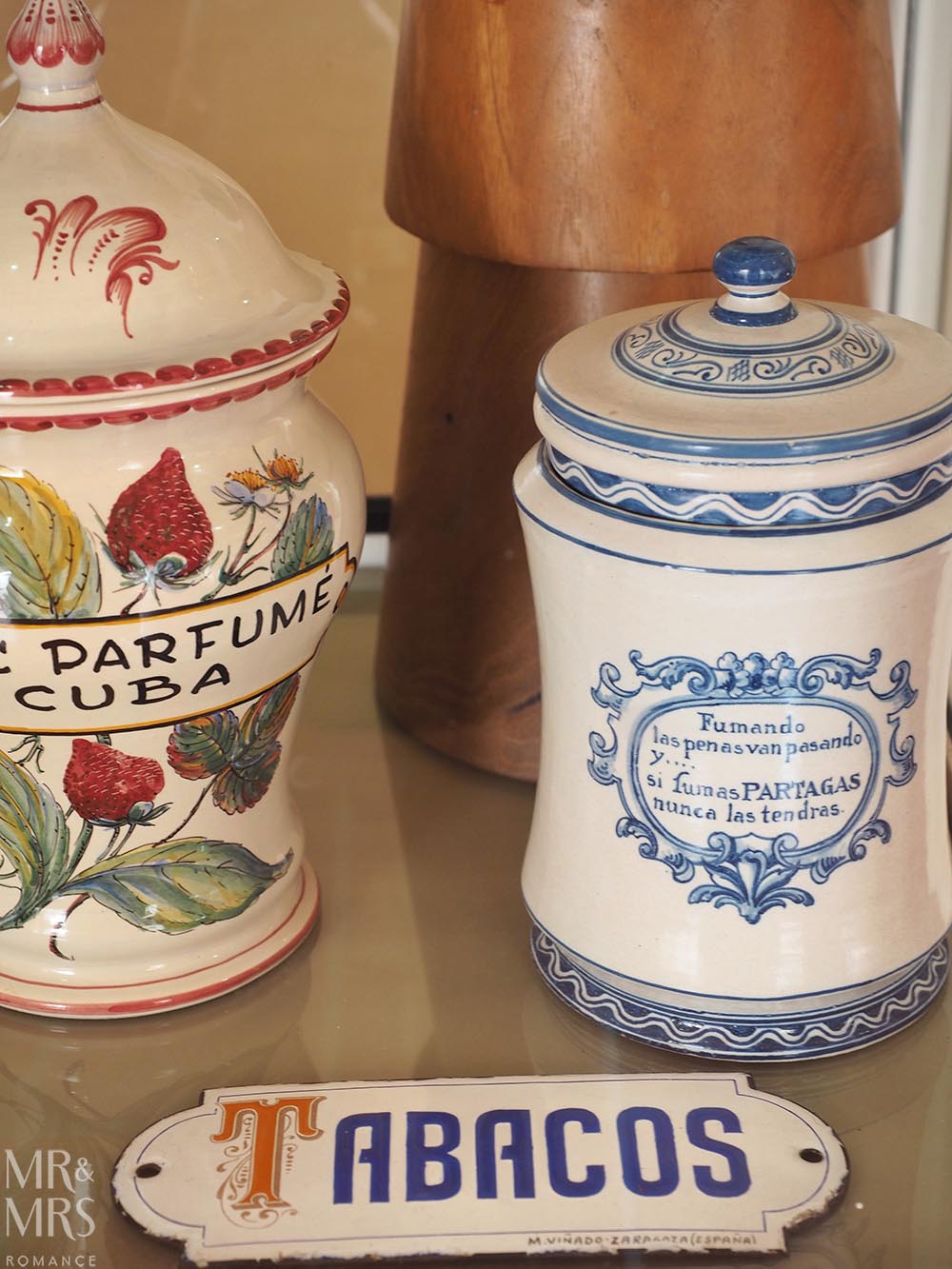 It was great to have a guide like Frank with us too – he was able to explain a lot of the displays and also translate the staff’s explanations, who could only speak Spanish.

Being able to see and learn so much about one of the most enigmatic parts of Cuban culture on this private tour was an absolute highlight on a trip that was already so full of amazing experiences.

If you’re heading to Cuba anytime soon, make sure you check out this half-day private tour. It’s amazing.

A list of local secrets – where to eat in Mudgee, NSW

Mudgee – a little over 3 ½ hours northwest of Sydney – is home to some of the greatest food and wine on the planet….