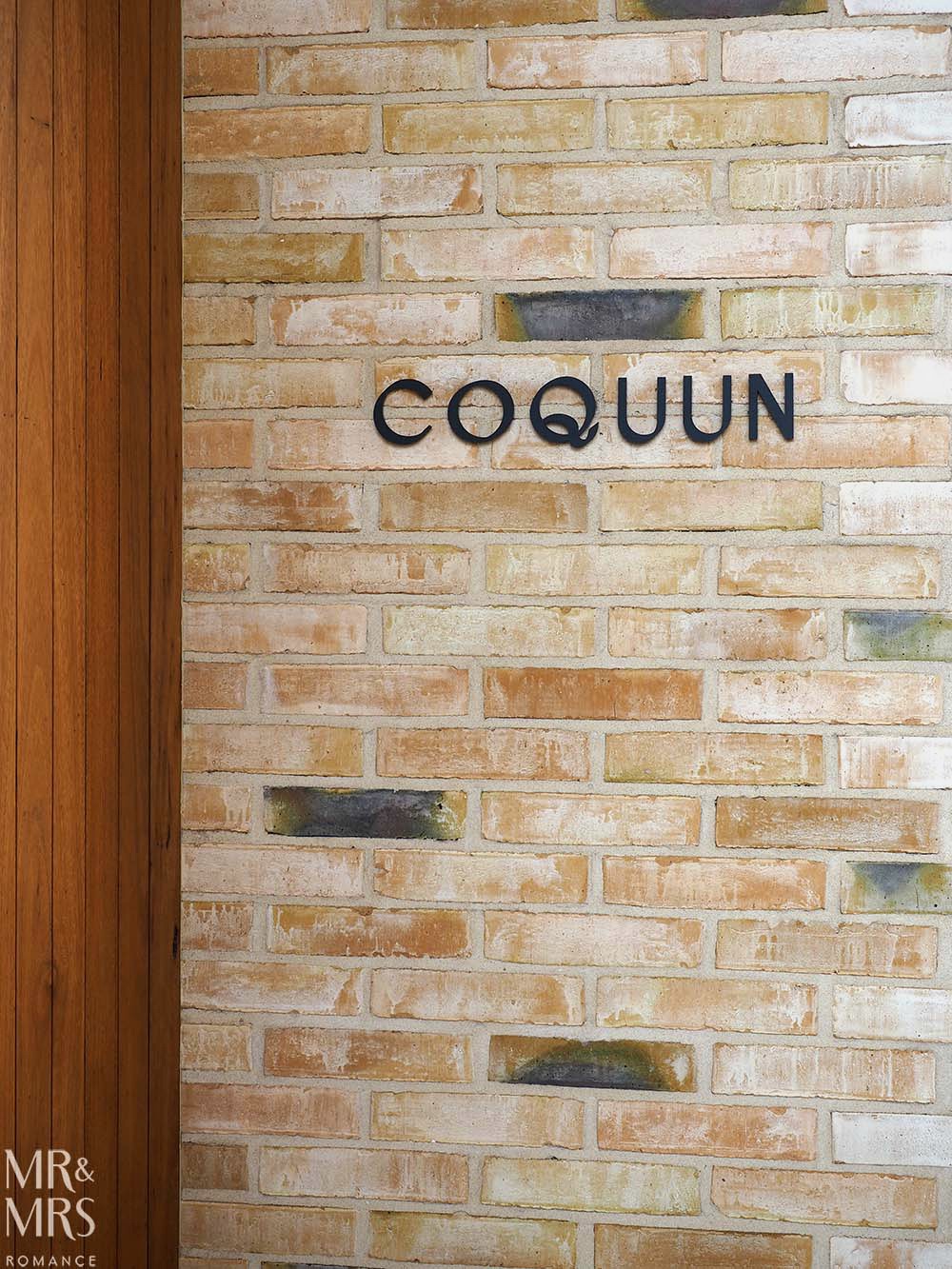 On its 300km journey down from the Mount Royal Range to the sea, the mighty Hunter River passes a place that shares its name. It’s an old name – perhaps the Hunter’s first: Coquun.

In the language of the Wonnarua People, local to the area, Coquun means ‘fresh water’ and has been the Hunter River’s name for thousands of years.

But now the name has a new meaning as well.

On the banks of the river, Coquun is a clever blend of café and deli by day, and bar and bistro by night. But whatever time of day you’re there, there’s a sense of connection between the restaurant and the flowing waters of the river that runs deeper than just the name.

It’s one of the latest signs that Maitland in the Lower Hunter Region of NSW is set on reviving the city around its riverside, with malls like the Levee doing a great job of activating parts of this historic town. 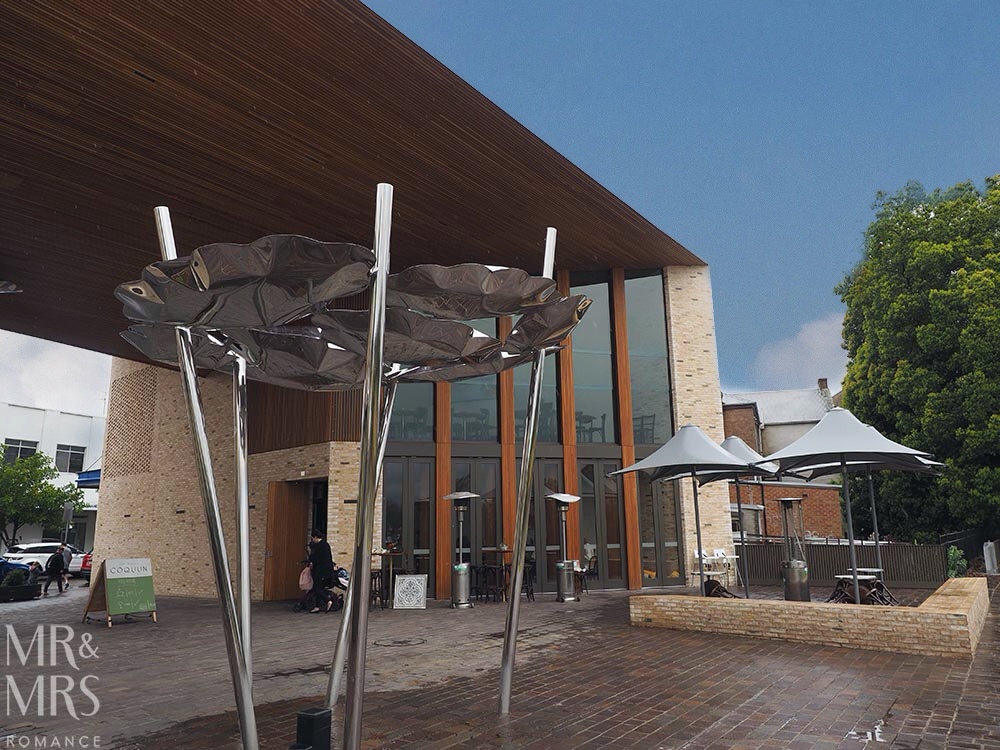 Coquun opened its doors in the Riverlink Building in late 2018. The building itself was part of the local council’s initiative to revitalise Maitland town centre.

The tall timber walls and sudden atrium, which link from the mall through to the river on the other side, announce Coquun to the street. 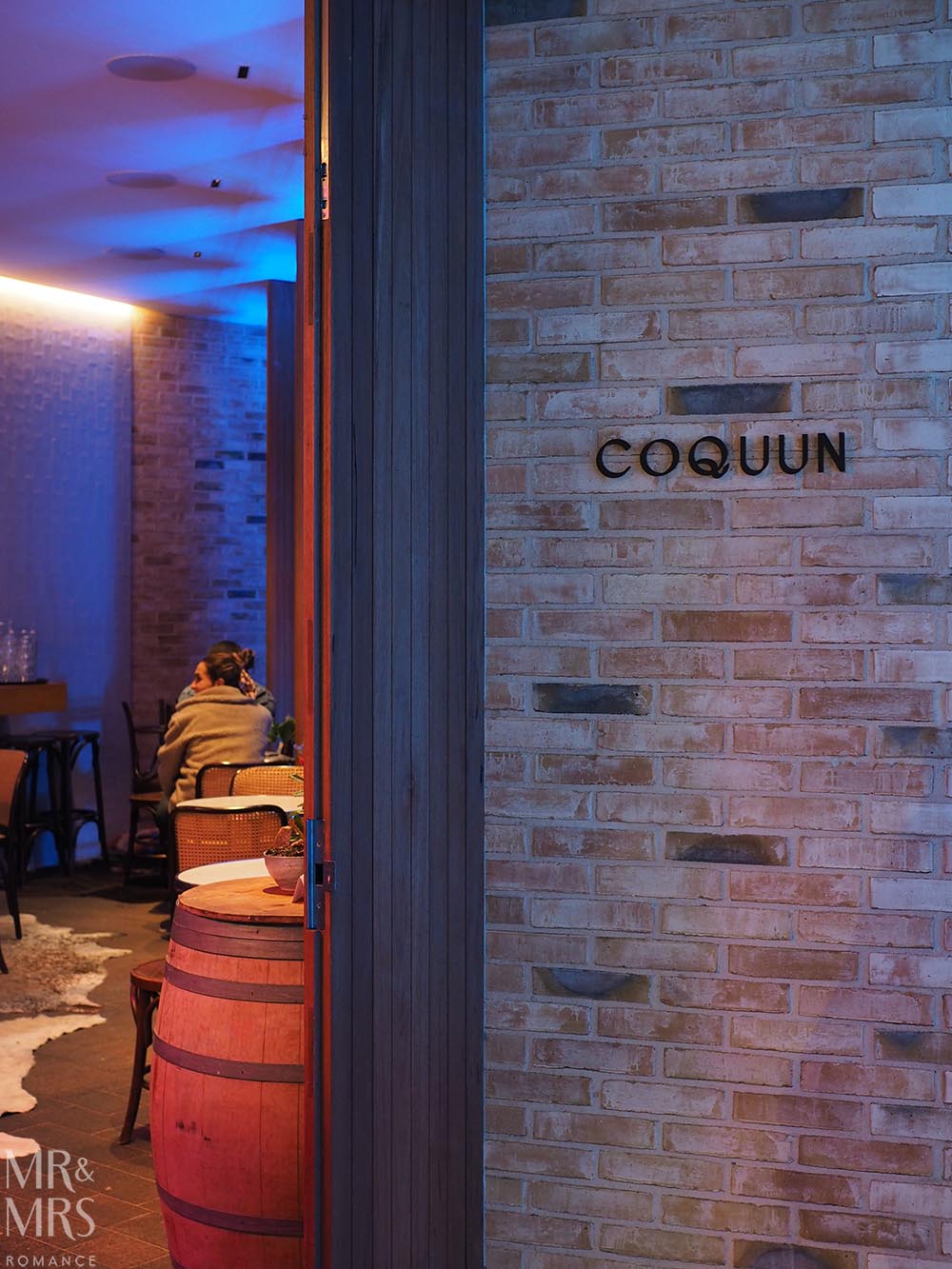 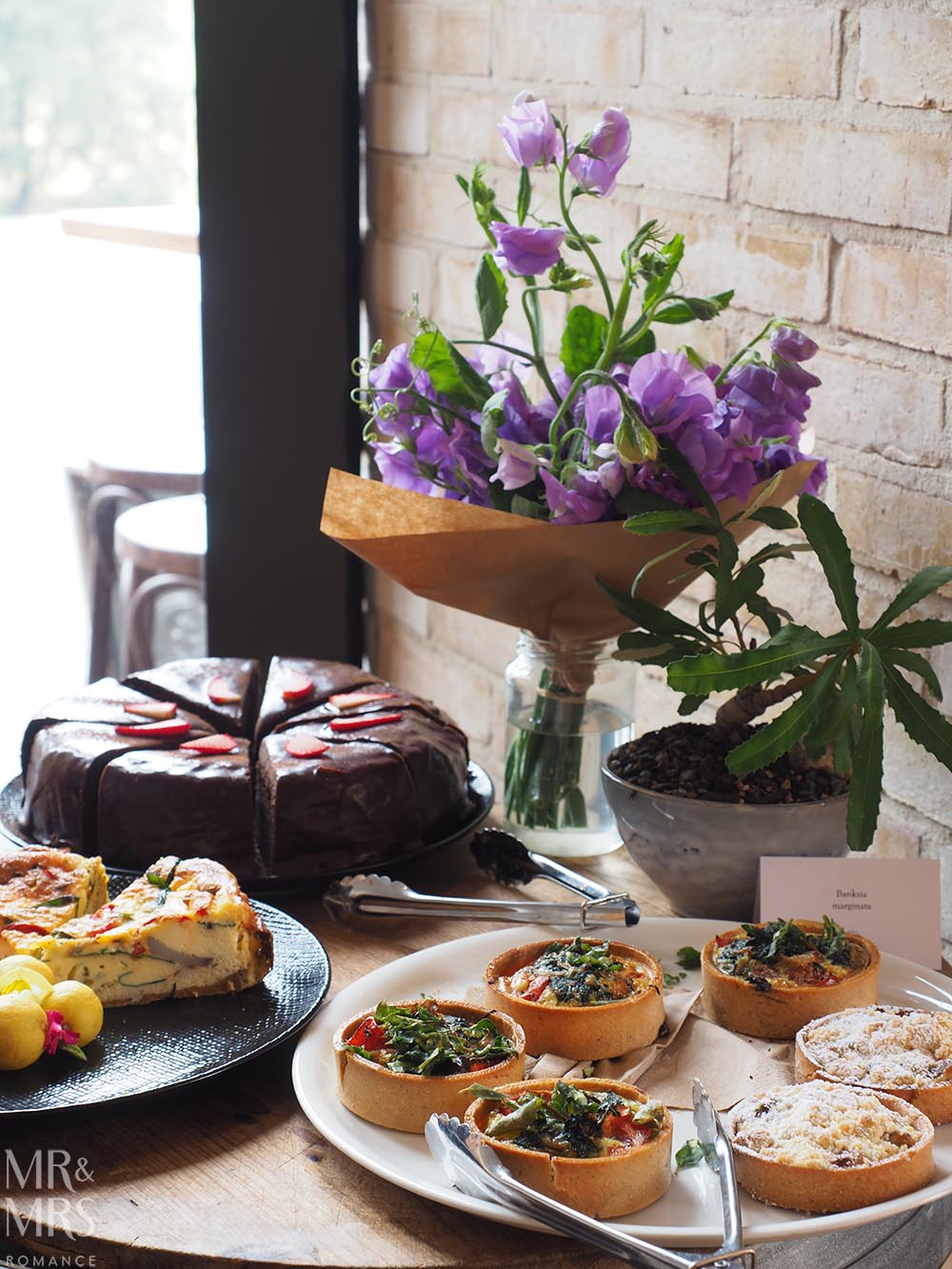 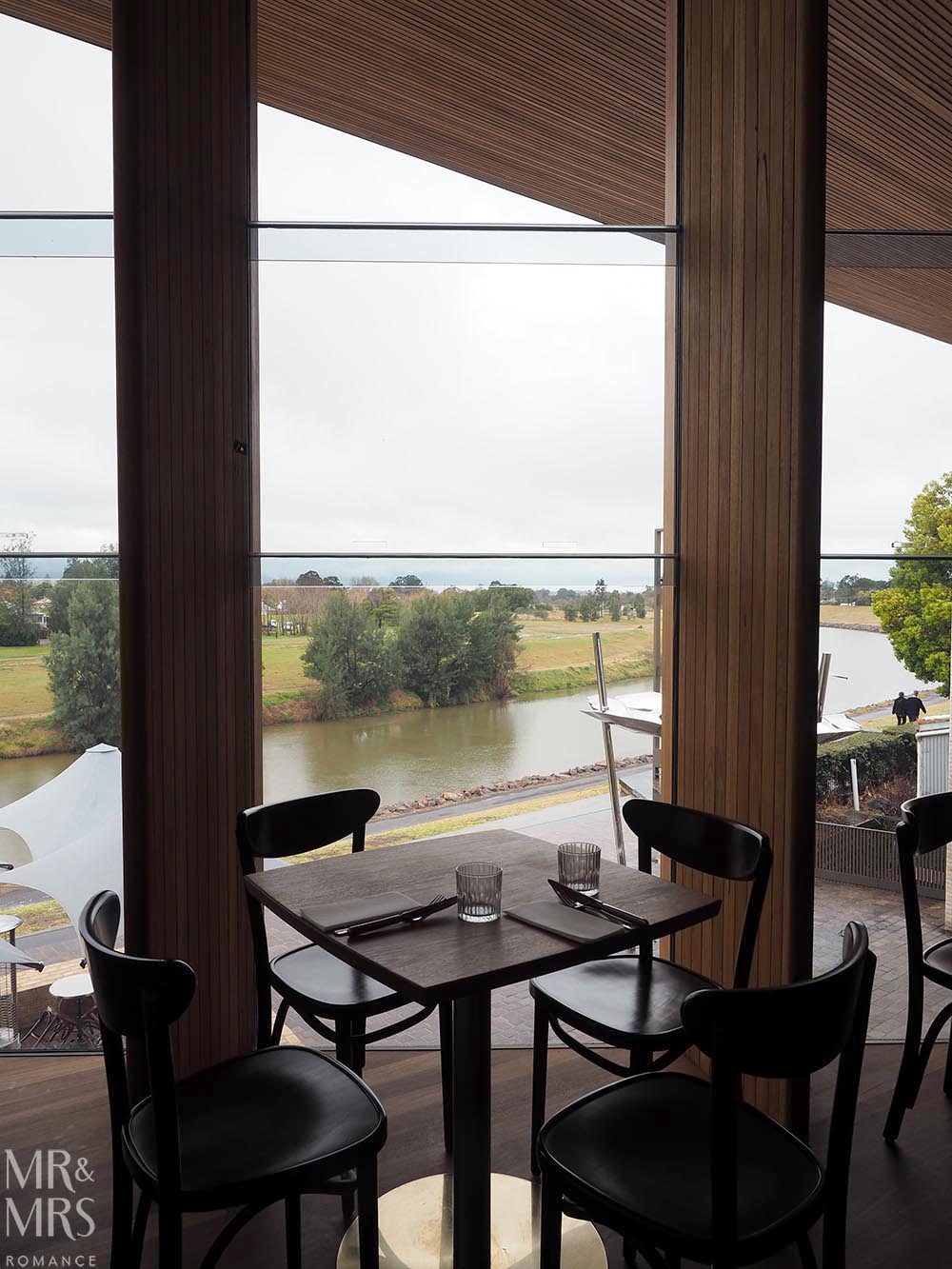 The restaurant is headed up by co-owner Daniel O’Leary, who not only explained the venue to us, but also the heritage of the area. Daniel is originally from nearby Morpeth, indeed from the Gringgai clan of the Wonnarua People, and his passion for the region is nothing short of contagious.

The dinner menu, Daniel points out, is full of locally-made and sourced produce. The same goes for the wine list. The restaurant has worked hard to maintain a 200km radius of where the things they serve come from.

Not only that, but Daniel and co have crafted a cuisine full of native ingredients like saltbush, wattle, lemon myrtle and Warrigal greens, which ties into the theme, feel and spirit of Coquun perfectly. 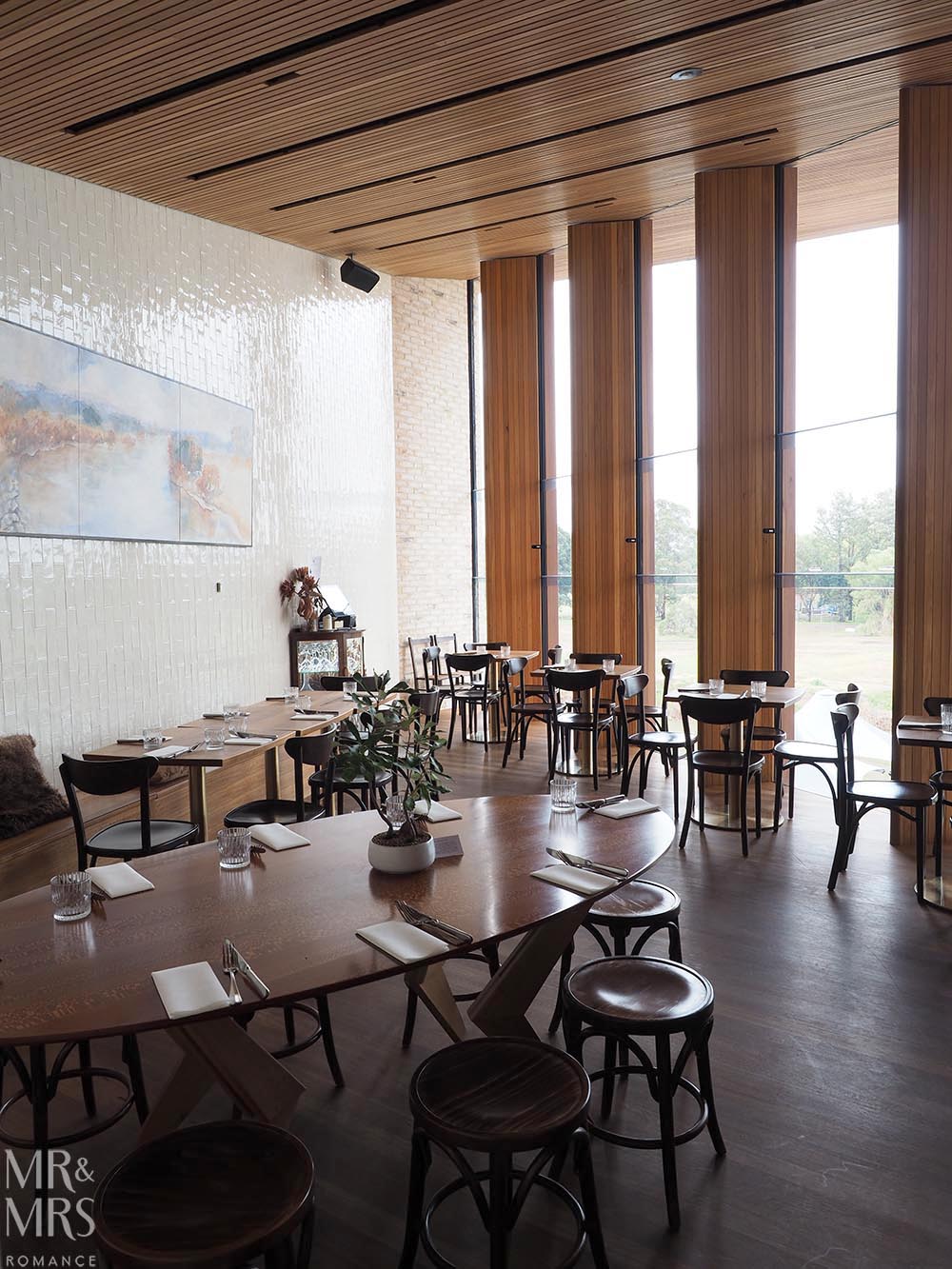 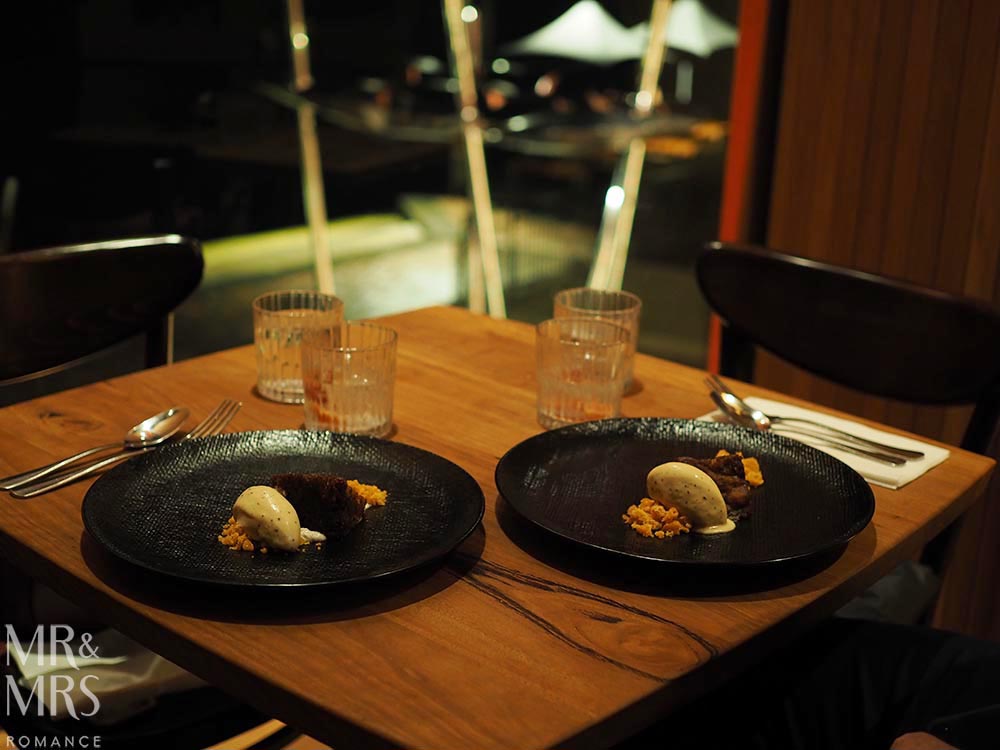 This is Daniel’s first dining venue. But having cut his teeth on The Dock – an inner-city dive bar in Sydney (and you’ll still see his brother running things there), Daniel has come back to Maitland to reconnect and re-establish with his roots.

And what he’s created is something very special. 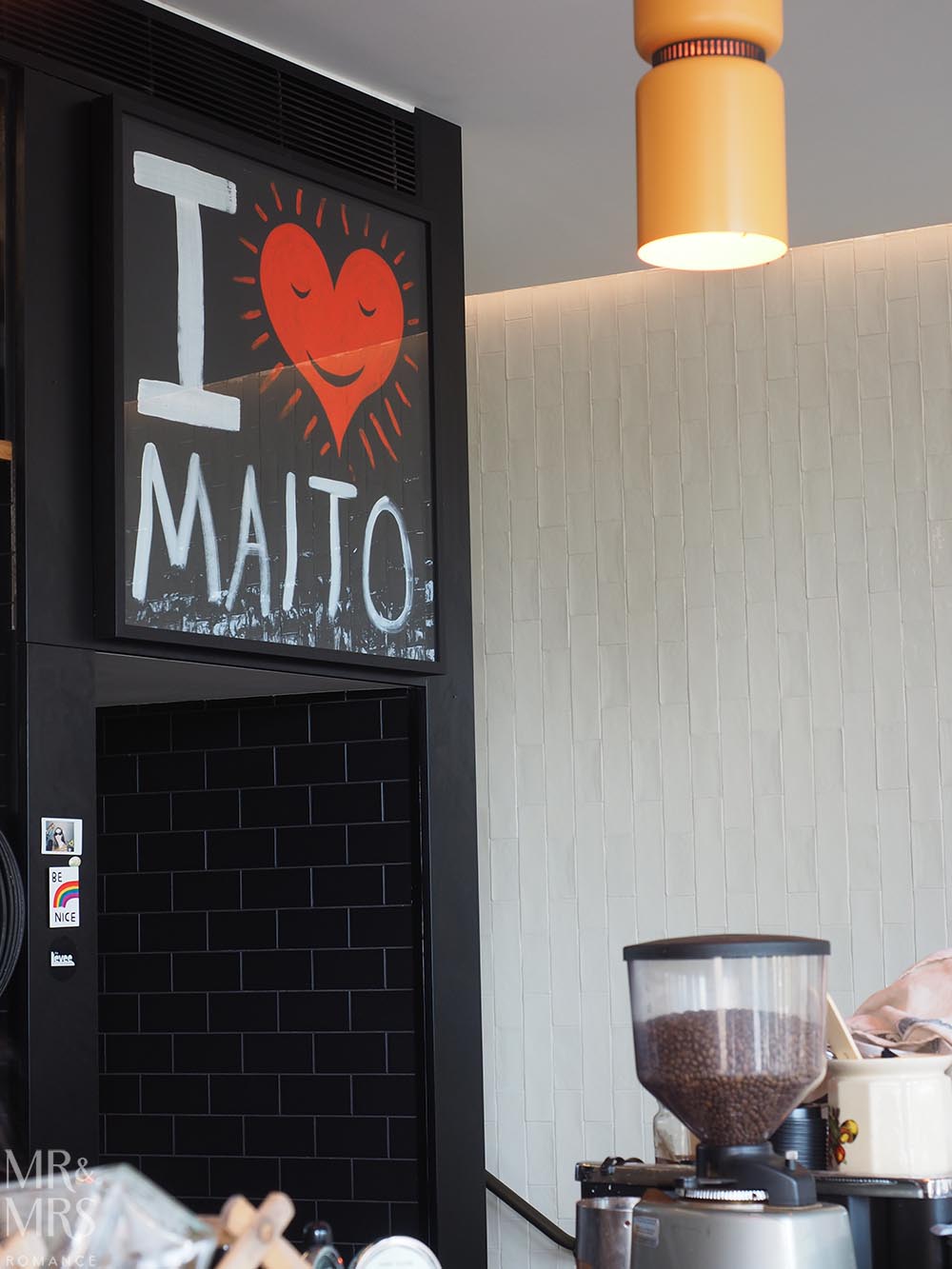 Coquun is open five days a week from 7.30am till late and on Sundays until 2pm, so the range of offerings here are broad. We came here for dinner on a Friday night and it was busy in a merry kind of way.

The beautiful lofted ceilings and curved timber-and-tile walls of the upstairs dining room, and the full-length windows looking out over the river, make for a romantic yet friendly setting for our meal.

Daniel talks us through the menu and makes us hungry with the promise of a five-dish degustation with matching wines. 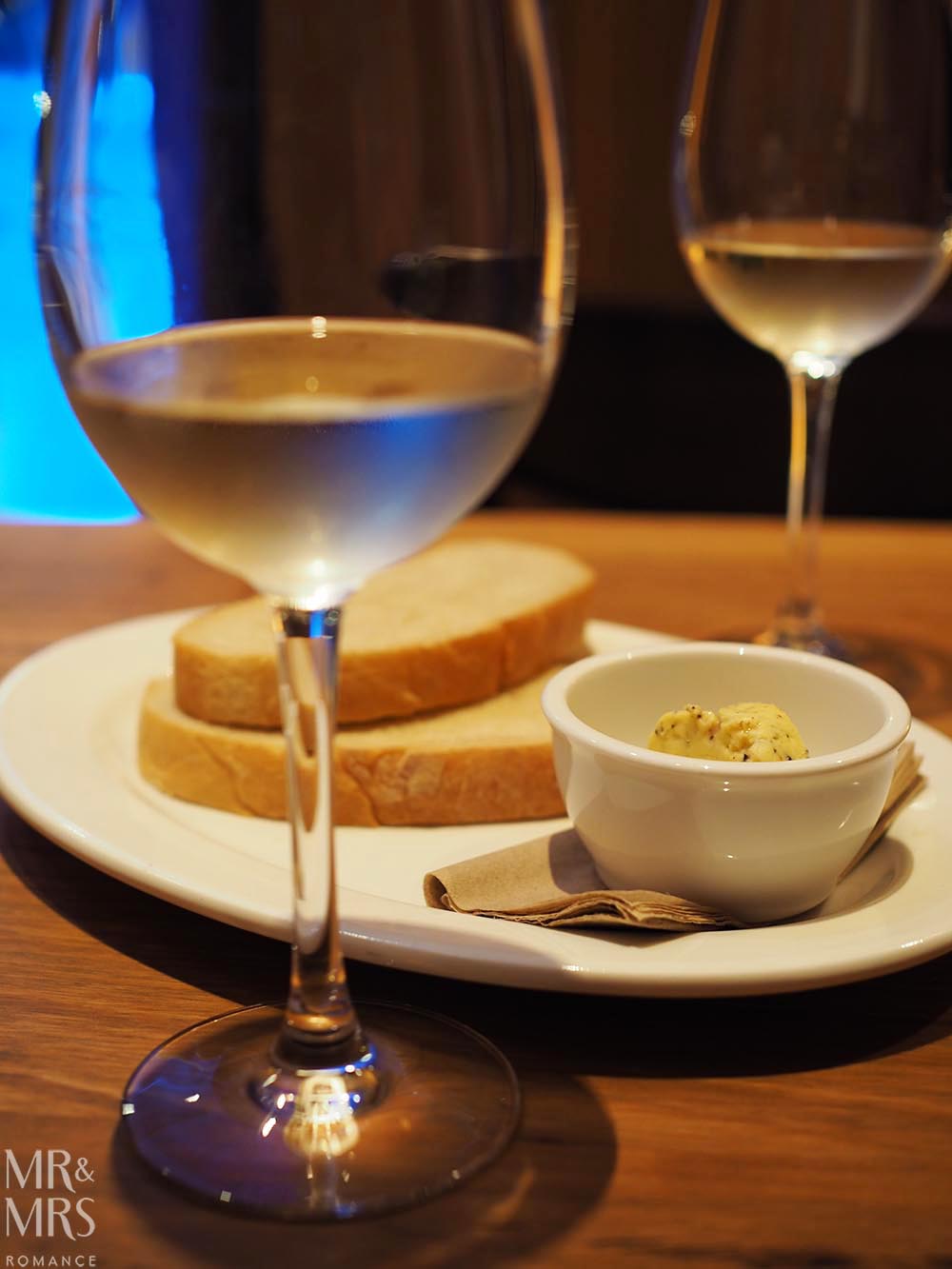 Simply on the menu as ‘bread’ this locally baked sourdough and freshly churned Warrigal greens butter is so good, you realise immediately that the whole menu is probably an understatement.

The bread comes warm and is dense and herbaceous, if this is all that comes to the table, you’d be happy. The butter is smooth and creamy, having been hand-churned by the kitchen that day, and has a savoury cocoa taste. 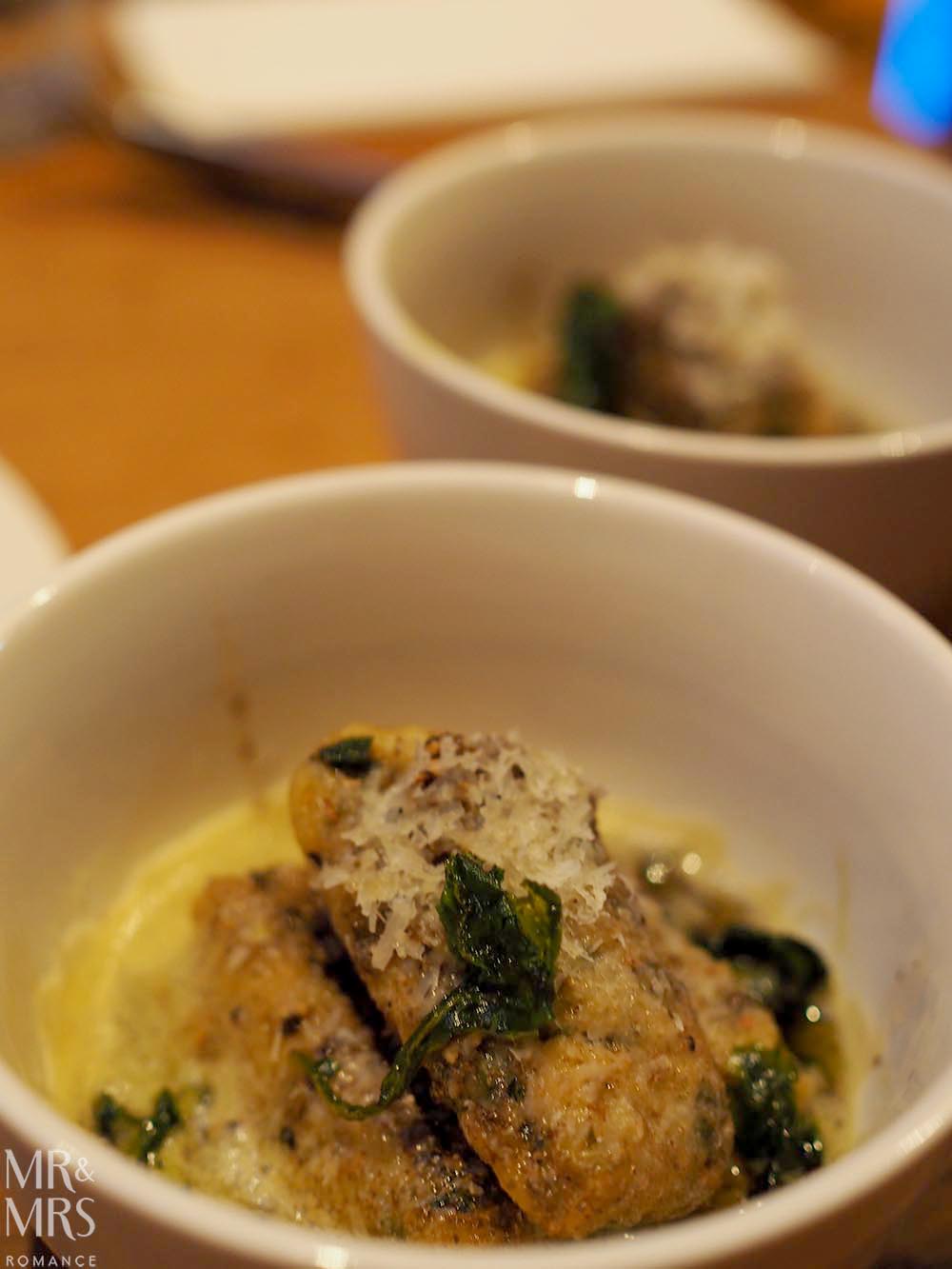 The house-made gnocchi – in fact Warrigal greens and ricotta gnocchi – are large, thumb-sized dumplings and come with a lemon myrtle beurré noisette that you’ll want to have saved some of the bread from before as a soak.

The gnocchi are hot, doughy and somehow crisp on the edges. There’s spice from pepper, aroma from lemon myrtle and so much flavour in the Warrigal greens and ricotta. The buttery broth at bottom is savoury and unctuous.

Daniel serves a glass of Vinden Estate Headcase Semillon from the Hunter Valley, which cuts through and adds minerality to the dish. 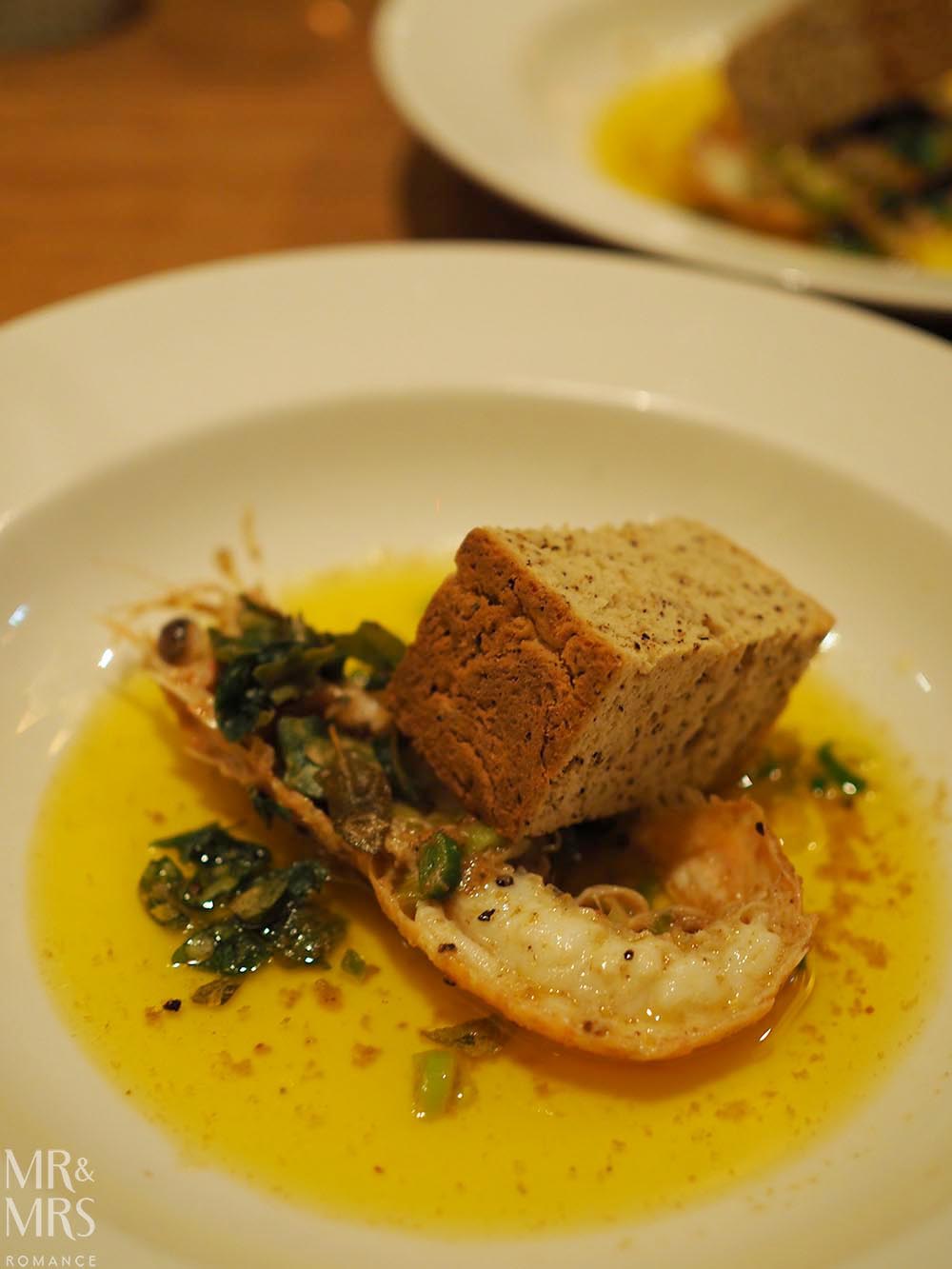 Anyone who’s had scampi in a British pub will understand my concern before this dish came out. But my trepidation is entirely unfounded. The fresh, sweet, head-on scampi is tender and blends perfectly with the damper ‘soldier’ herbed with saltbush and wattle seed.

The somehow juicy slices of spring onion and the salty bush tomato beurré blanc sauce soaks into the damper making this a fulfilling dish. Not a soggy, crumbed nugget miscellaneous seafood in sight. Sorry England.

The Krinklewood Verdelho from Broke Daniel serves, which is biodynamic and organic by the way, balances with the richness of this dish and goes beautifully with the scampi. 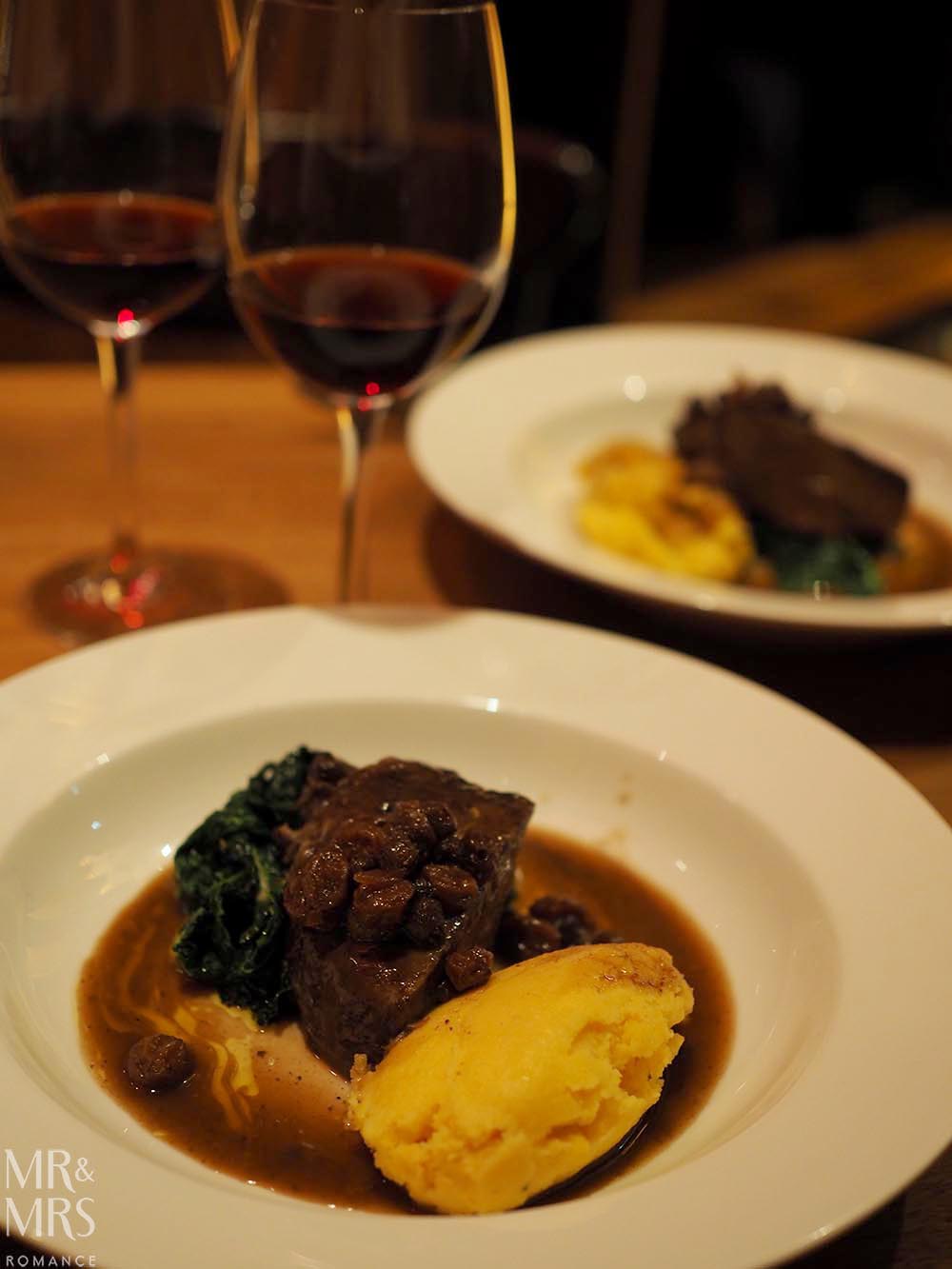 Quite possibly my favourite cut of beef, I’m excited to see how the kitchen here does it. As I’d hoped the meat is fork-cuttingly tender, full of flavour and clearly cooed for a very long time with a lot of love.

The beef comes in a rich, dark wattle seed jus with exquisitely chewy cavalo nero or Tuscan kale. There’s also polenta, which is firm and grainy – almost crumbly in fact, which is surprising considering the amount of butter used in the earlier dishes.

At first I’m not sure about the polenta – should it have been creamier or lighter and fluffier? – but then we realise the texture cleverly goes well with a dish where everything else is so soft.

The chutney – made in house with foraged Muntrie berries – is slightly sultana-esque, which adds a welcome fruit element to a wonderfully savoury dish.

This time, Daniel pours a glass of Nebbiolo from Glandore Estate Winery in Pokolbin, which isn’t on the menu but he thinks goes best with this sumptuous, hearty dish. He’s not wrong. 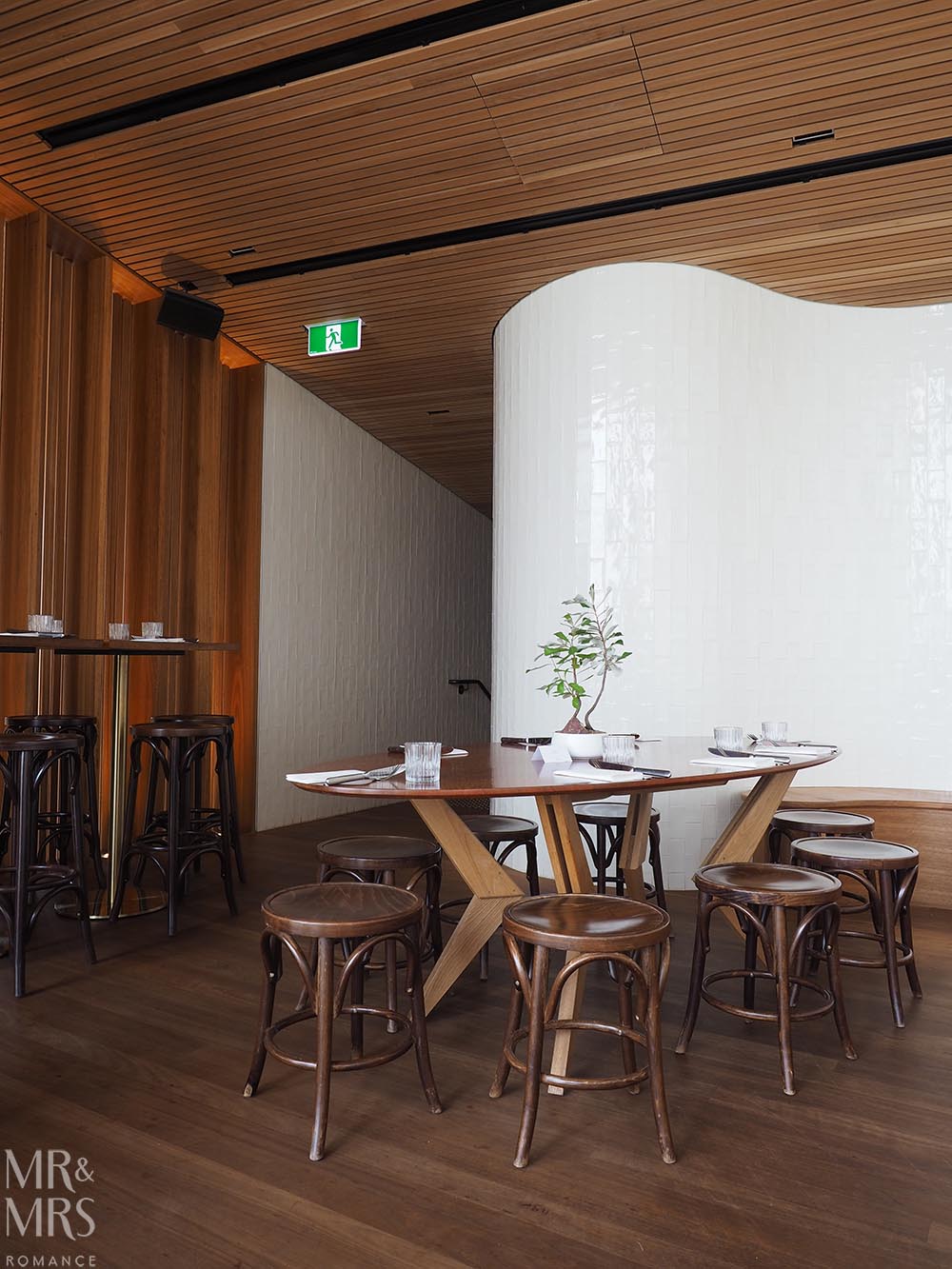 Ever the bartender, Daniel can’t help himself and brings us a gin and tonic between courses. It’s the perfect time before dessert and is a wonderful seltzer post dinner.

The elegant gin is from Farmer’s Wife Distillery – the first distillery in the Hunter Valley. What’s more the head distiller is a woman, which is pretty cool. Of the 13 botanicals in the gin, at least six are native to Australia.

And to take things up a notch, Daniel serves the G&T with a garnish of cured quondong, a native berry that usually has a tart taste but adds a skilful balance to this drink. 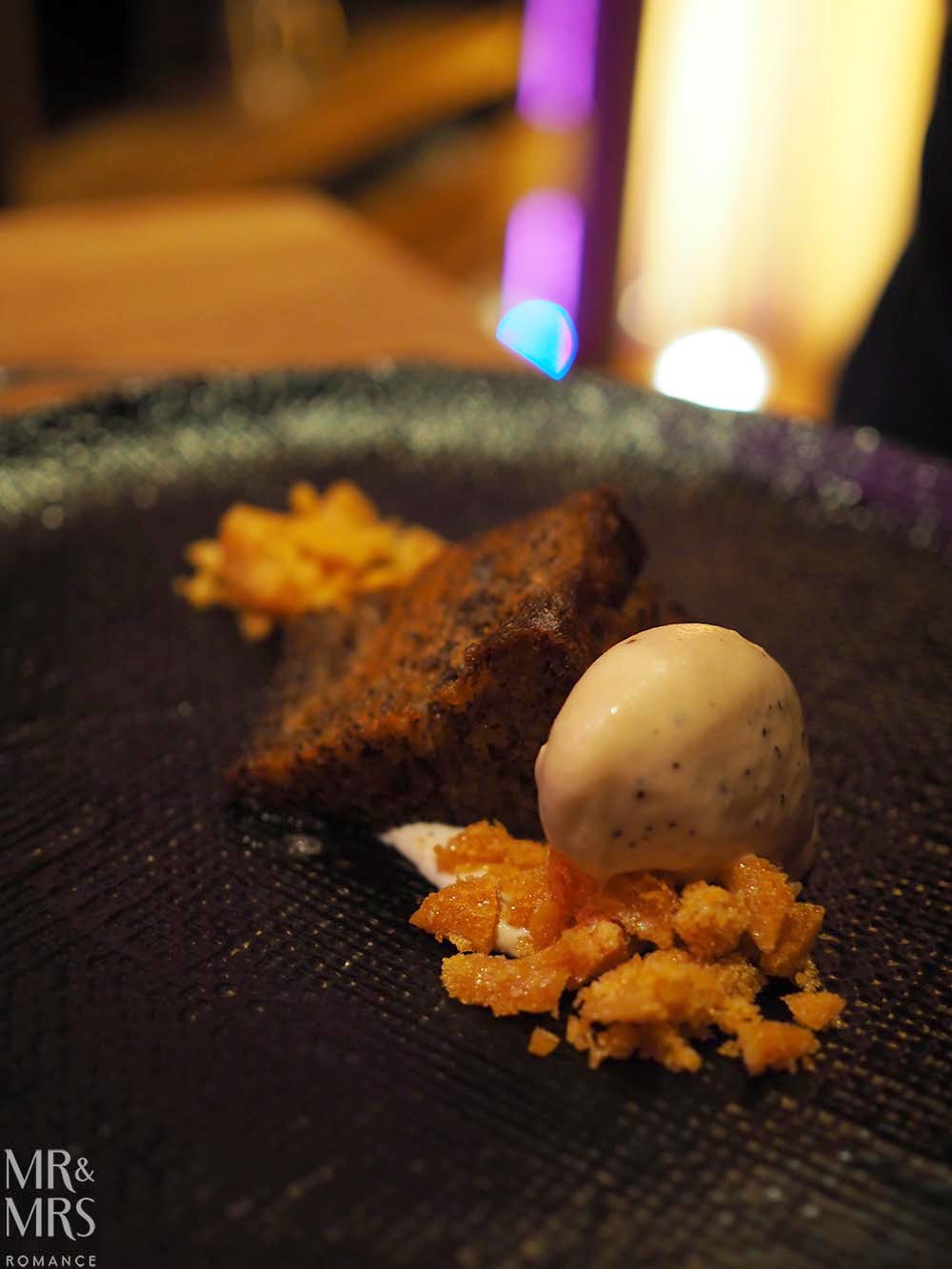 This remarkable dessert is basically what banana bread wants to be when it grows up! Slightly salty, crisp on the corners, rich, dense and malty, I’ve never had anything quite like this before.

The quinelle of wattle seed ice cream and a honey-forward honeycomb crumb turns this into a very intelligent dessert you won’t find anywhere else. 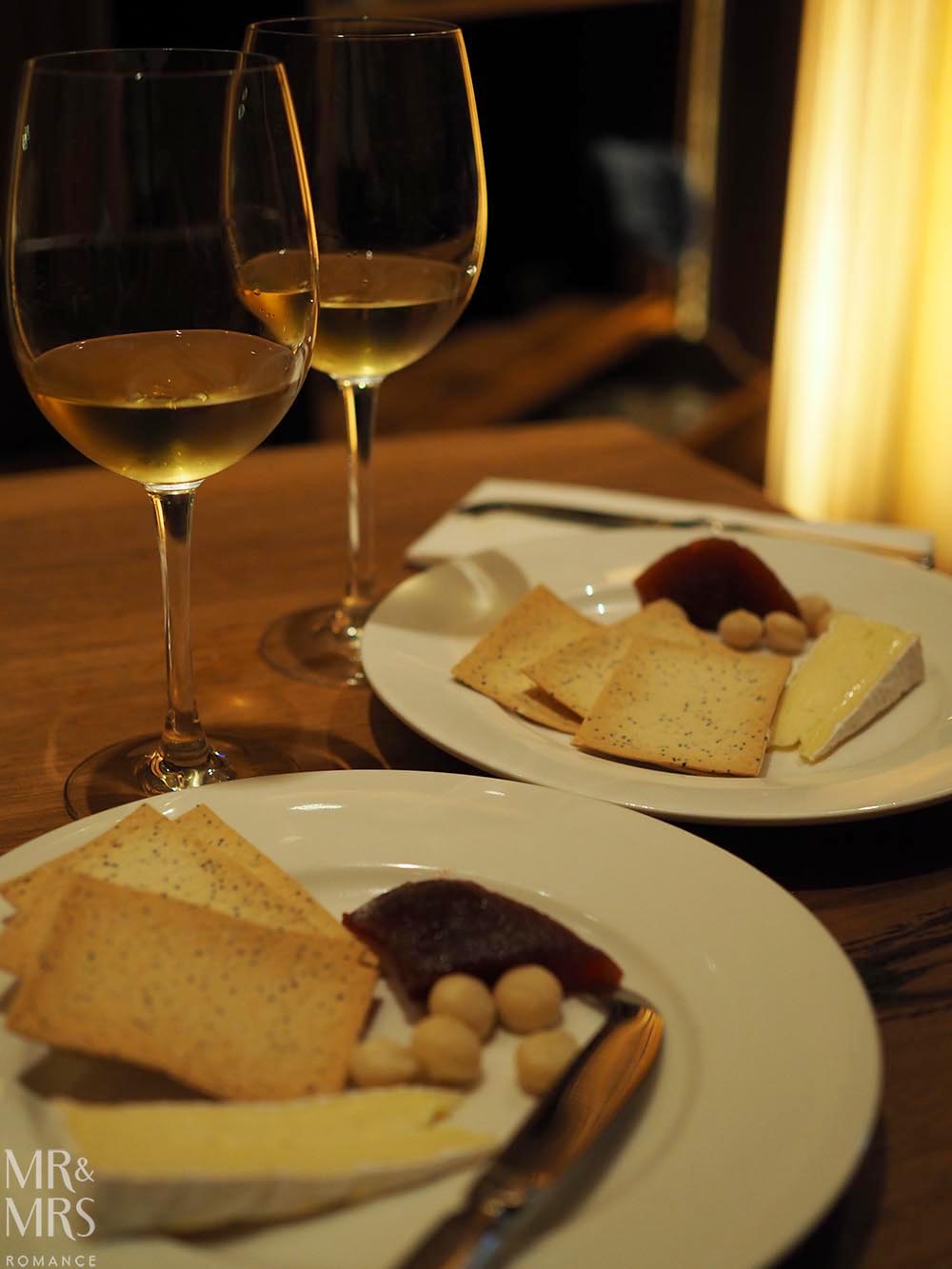 Somehow, we have space for one final dish – though when it comes to cheese, there’s always space, isn’t there. This locally produced Jersey brie is amazingly creamy with a resolute saltiness that makes brie so moreish. The cheese comes with whole local macadamias and quince paste.

Daniel’s last pour is a sticky also from Krinklewood Winery. This Leucia dessert wine is a wonderful example of a well-aged sweet wine (2014) that we think will be coming back in fashion in Australia over the next few years. 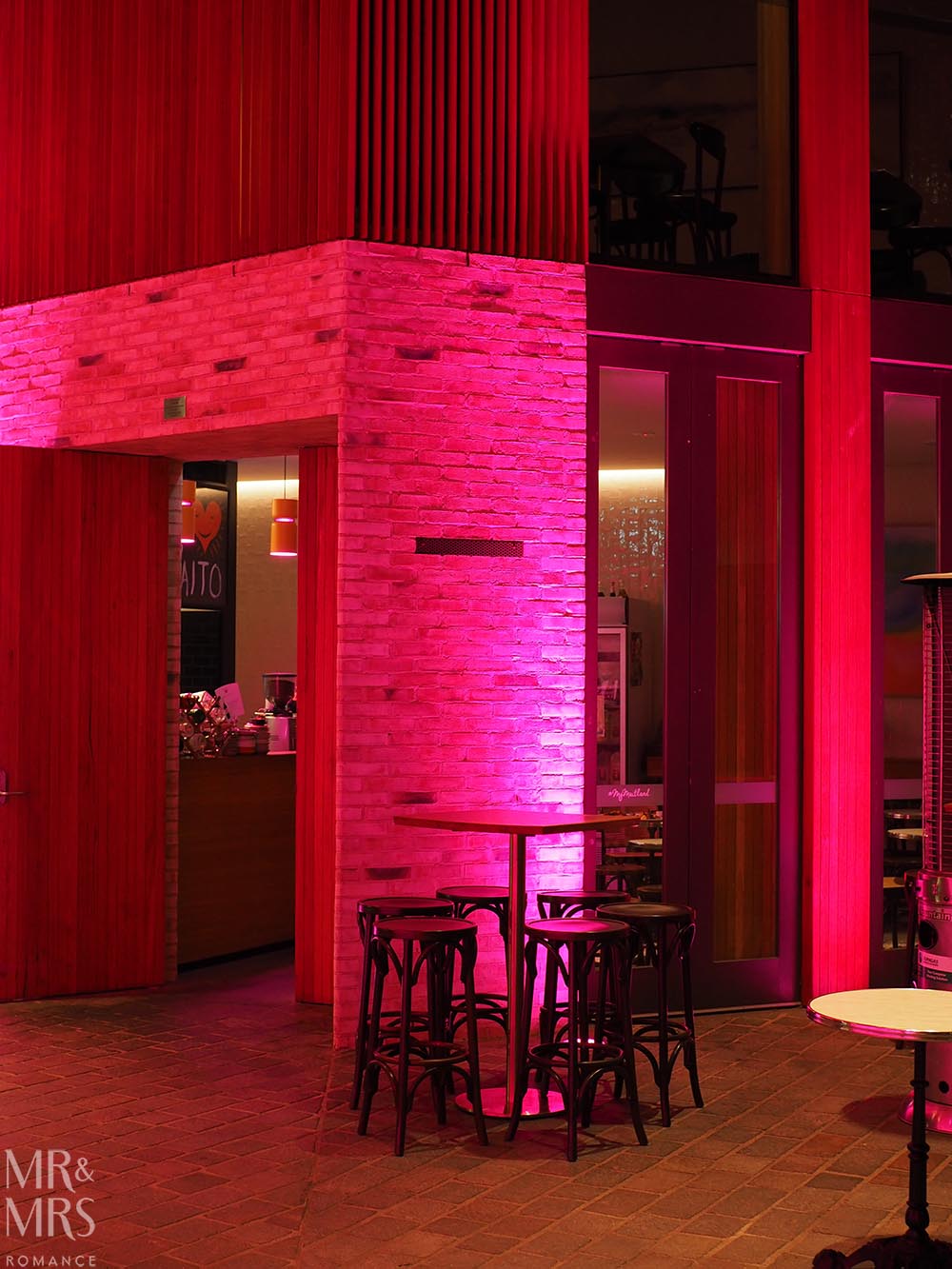 We leave Coquun feeling not only very full, but very fulfilled too. There aren’t many restaurants out there that can balance the measure of native ingredients throughout a menu and yet make it so stunningly modern and exquisitely tasty.

That’s not to say that Australian native produce is hard to work with or tastes bad.

More that not many kitchens have the skill, patience, passion and tenacity to find ways to champion these undervalued ingredients. After all, it’s easier to go with tried and tested than to try and test.

Coquun is not only an asset to Maitland’s burgeoning dining scene, it’s an important vanguard of modern cuisine and Australian culture. Coquun: synonym of the river, synonymous with delicious, local food. 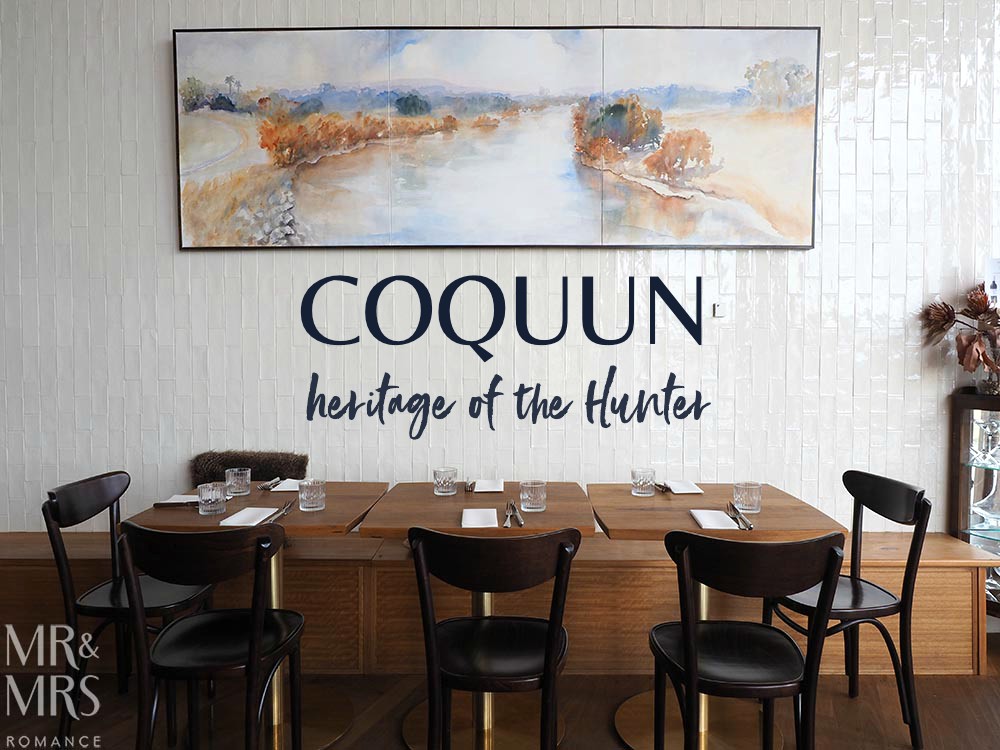 We dined at Coquun as guests of Destination NSW.

Sweet or savoury: how to eat real Belgian waffles

If you thought waffles should only be sweet or – at a push – have bacon and a bucket of maple syrup on, then…