At last, the British summer has arrived. And it looks like it’s making up for lost time. A gift from the Sahara has sent Europe into a big mad heatwave. 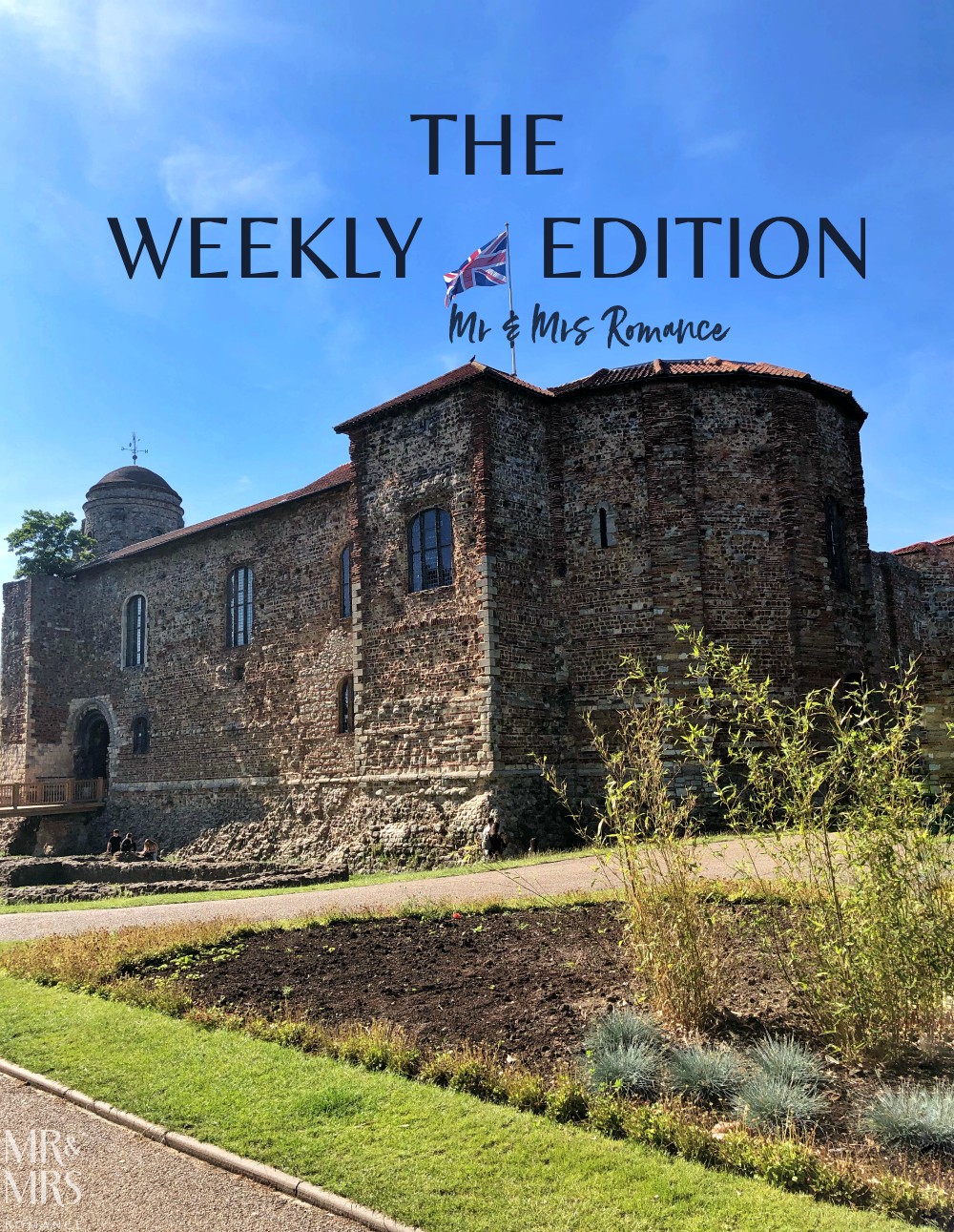 Hot days have coincided with our friends Clare and Dave heading to Greece for a week. So meanwhile we’re looking after their two gorgeous dogs and enjoying a bit of local life in our old stomping ground. 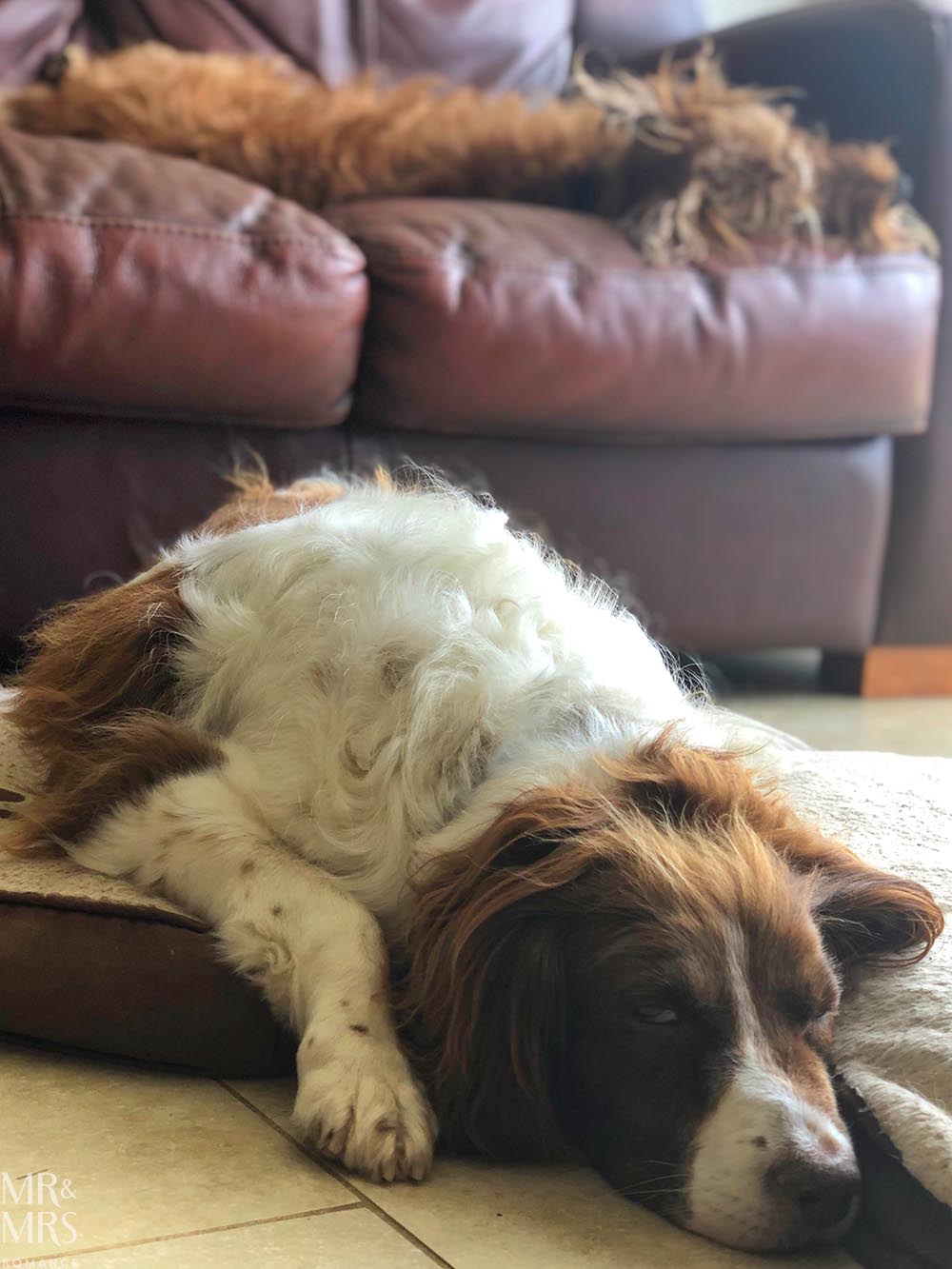 We’re pretty gutted we couldn’t go with Clare and Dave to Greece this time, but it has meant we’re getting the chance to look after these two pups. We’ve pretended we’re doing Clare and Dave a favour, but really it’s us who are cashing in.

Ruby the Irish terrier manages to find the best ways to relax on the sofa. 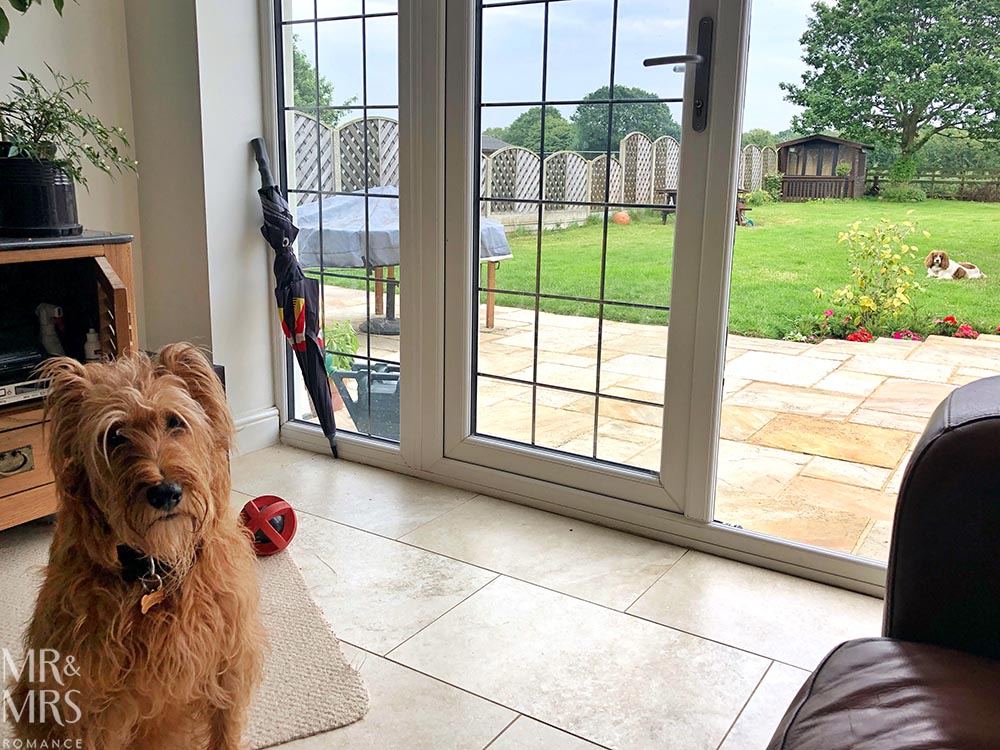 There are times when Ruby and Flo can be a bit disconcerting. Sitting watching TV one afternoon, I look up to find them both staring at me. Flo’s deep undercover in the garden while Ruby’s up close and obvious.

They’ve been watching me for about half an hour now and I’m wondering what’s going on. I feel like an injured animal and the wolves are circling… well, sitting. 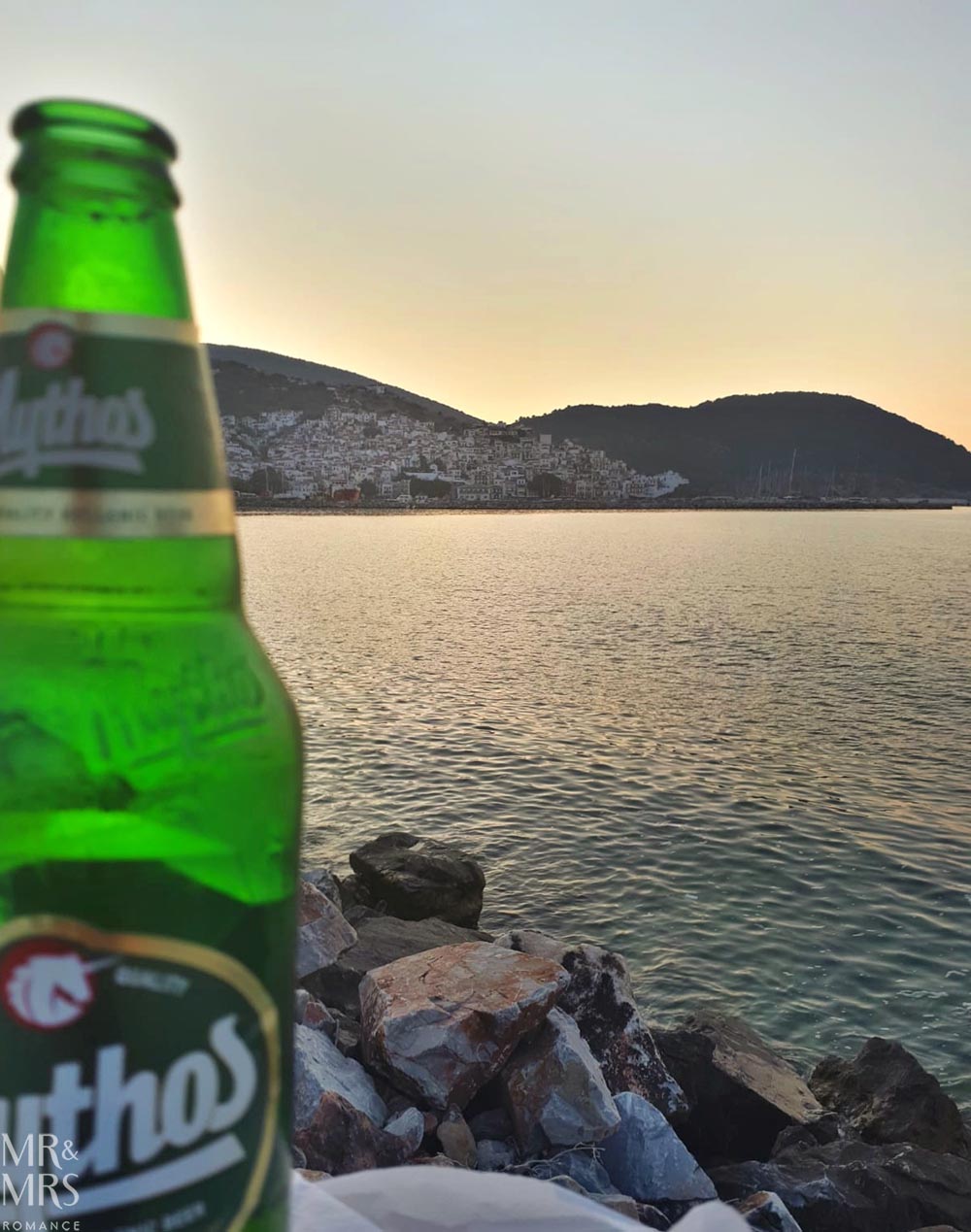 Meanwhile, on the island of Skopelos deep in the Aegean, Clare and Dave show us what we’re missing out on. Next year we’ll plan things a bit better and the four of us will be reclining for the sunset, a bottle of Mythos in hand. 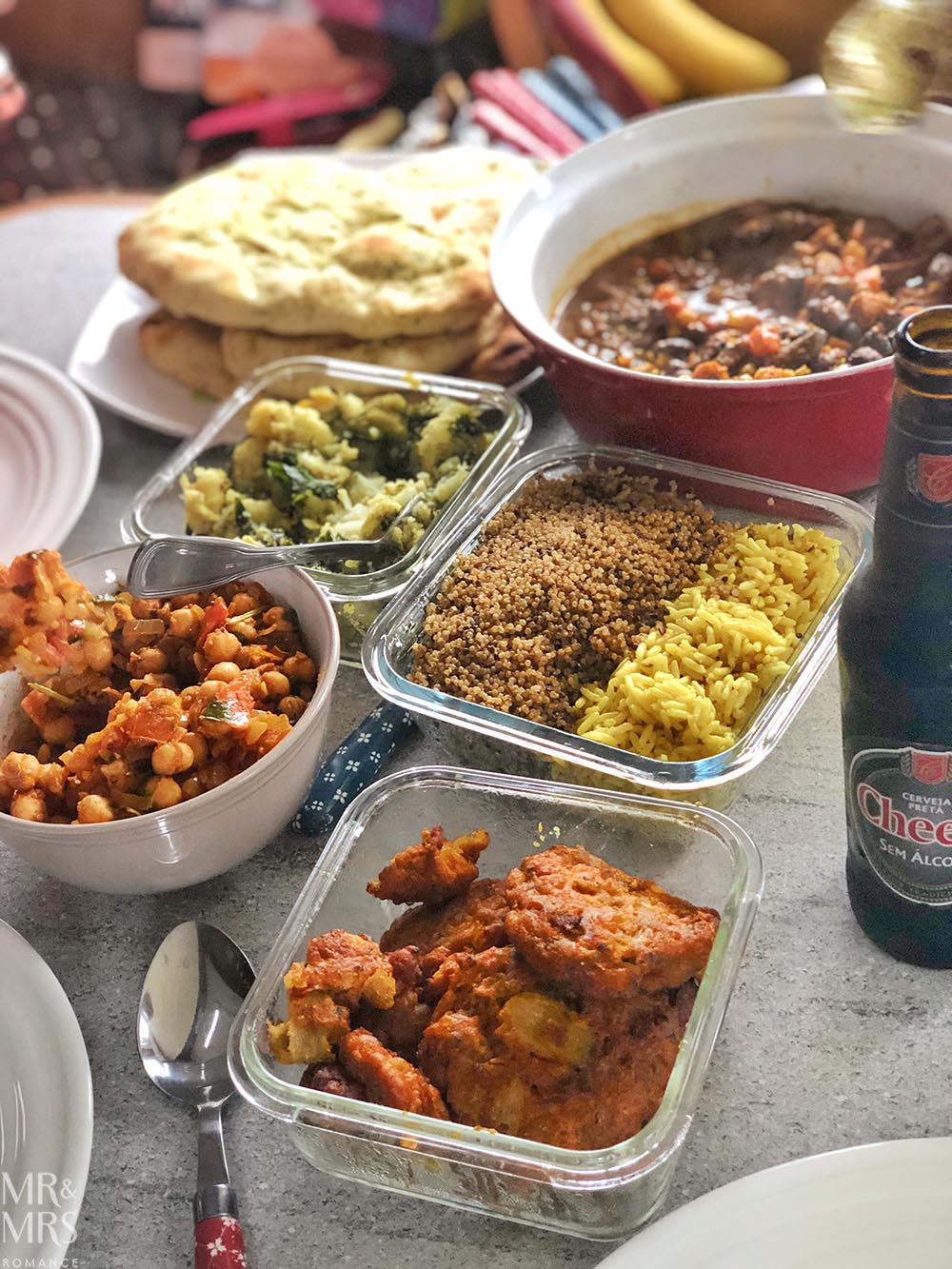 Tonight, we’re having dinner with my mum and dad. They eat a plant-based diet these days (they can’t help but be on trend these two!) and have cooked up a curry.

I’ve brought along my veggie speciality – my chana masala – to add to the feast, but they’ve got everything else covered. It’s amazing spread considering they live in an – albeit massive – motorhome. 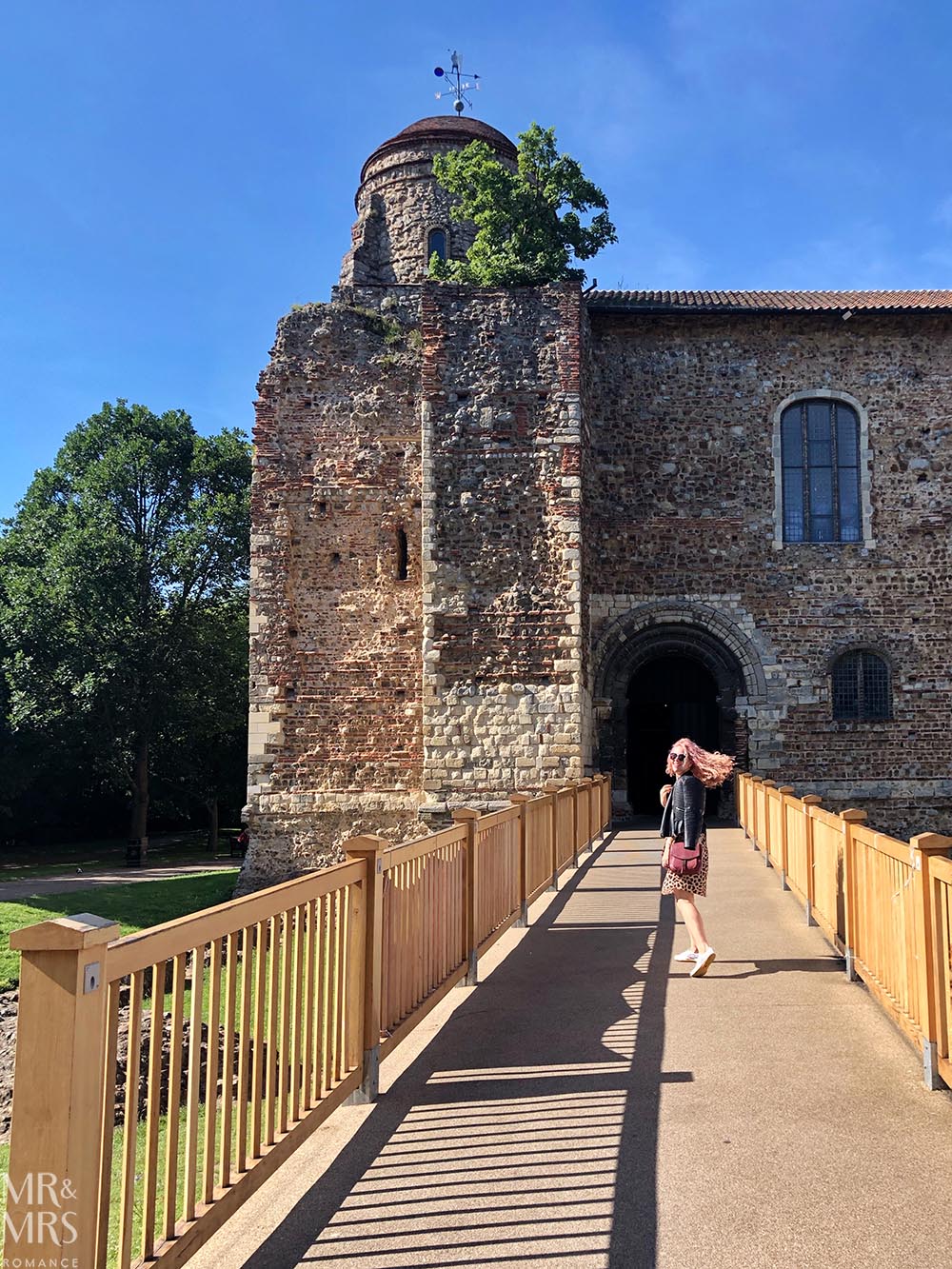 This afternoon, Christina and I have taken time off dog-sitting to explore Colchester – Britain’s oldest recorded town. We used to live here years ago and I spent most of my childhood here.

The focal point of the town from a visitor’s perspective is the beautiful Colchester Castle. It’s been here since 1076, when the Norman king William the Conquerer (William I by then) ordered its construction.

It was built on top of the ruins of a Roman temple to Claudius. It’s been a keep, a gaol and even a wedding present, but has been a museum of antiquities since 1860. 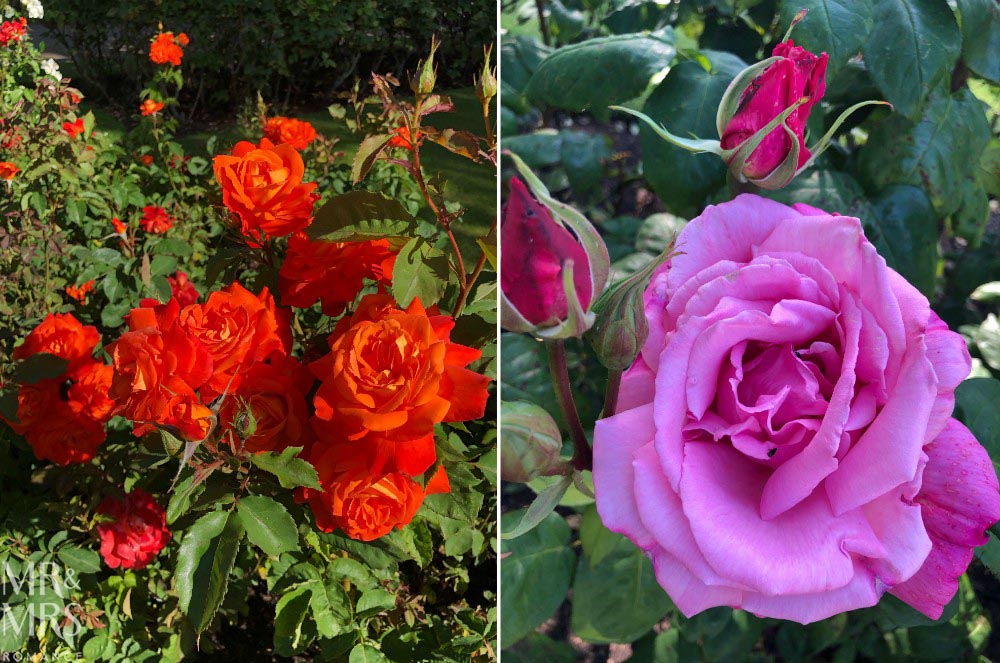 All around the castle, the grounds are full of flowers – especially this time of year. The Colchester Castle Park is always well tended. The rose beds at the front of the park are stunning.

The park is also home to lots of festivals and events – in fact the annual Colchester Food and Drink Festival is on soon. Watch this space to see what happens. 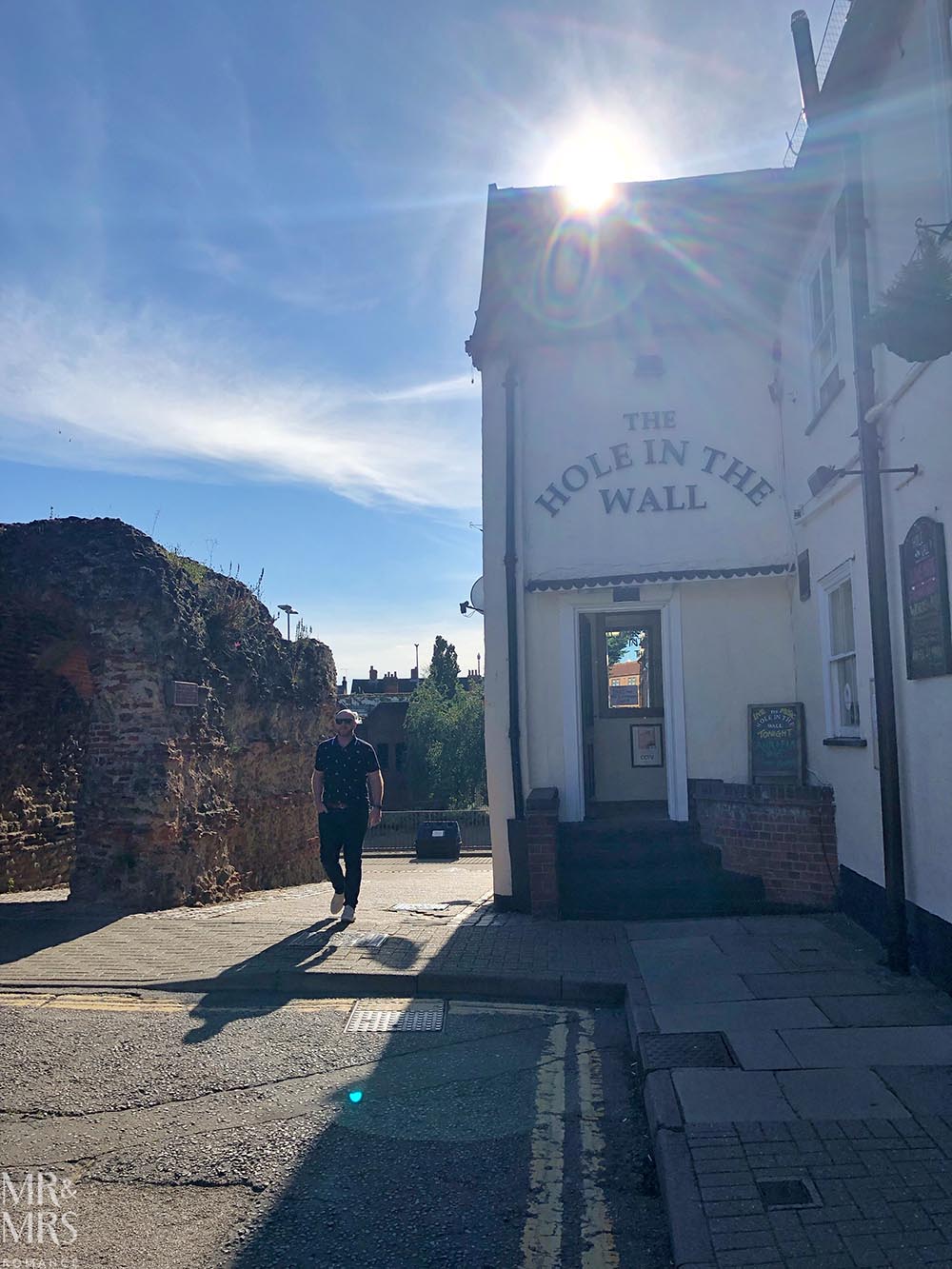 After we’ve taken some time to literally smell the roses, we’ve gone across town to a pub we used to go in from time to time when we lived here.

The Hole in the Wall is a pub that’s been built into the ancient Roman walls that once surrounded the old town of Colchester. It’s a fun place, full of characters and well worth a visit.

There is a courtyard here, but it overlooks a busy road – you’re better off inside absorbing some of the banter you’re sure to encounter! 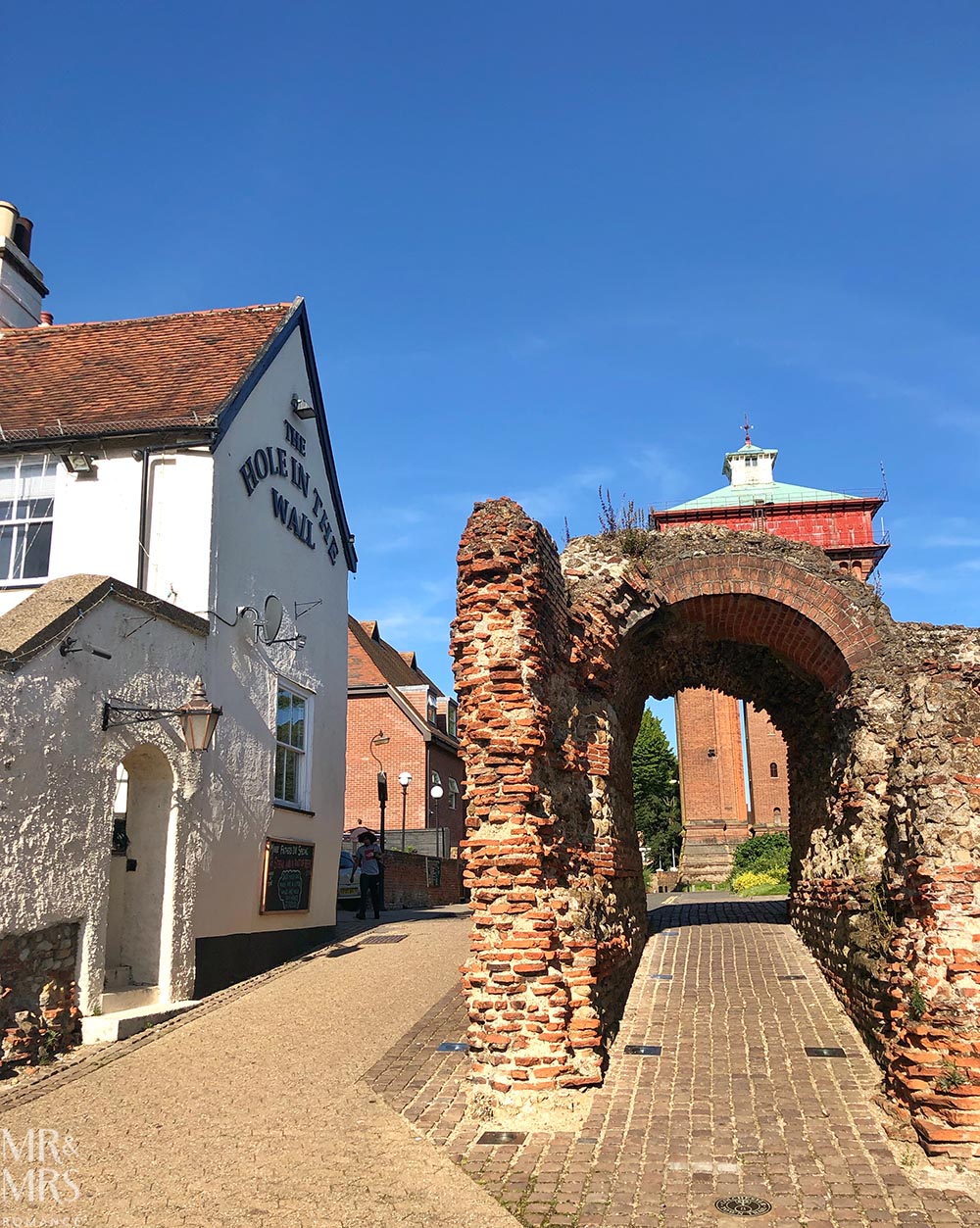 Next to the Hole in the Wall is the Balkerne Gate – the largest surviving Roman gateway in Britain. It started off as a triumphant arch here in 50AD to mark the foundation of the town.

But the Romans had to fortify it and built the arch into a wall surrounding Colchester for protection against Queen Boudica, who still managed to sack the town in 60AD.

The wall remained a main defence of the town until the Siege of Colchester – part of the English Civil War – in 1648. After that, the wall and its arches were pulled down or built on.

The Hole in the Wall stands where the arches of the western gate would once have been. 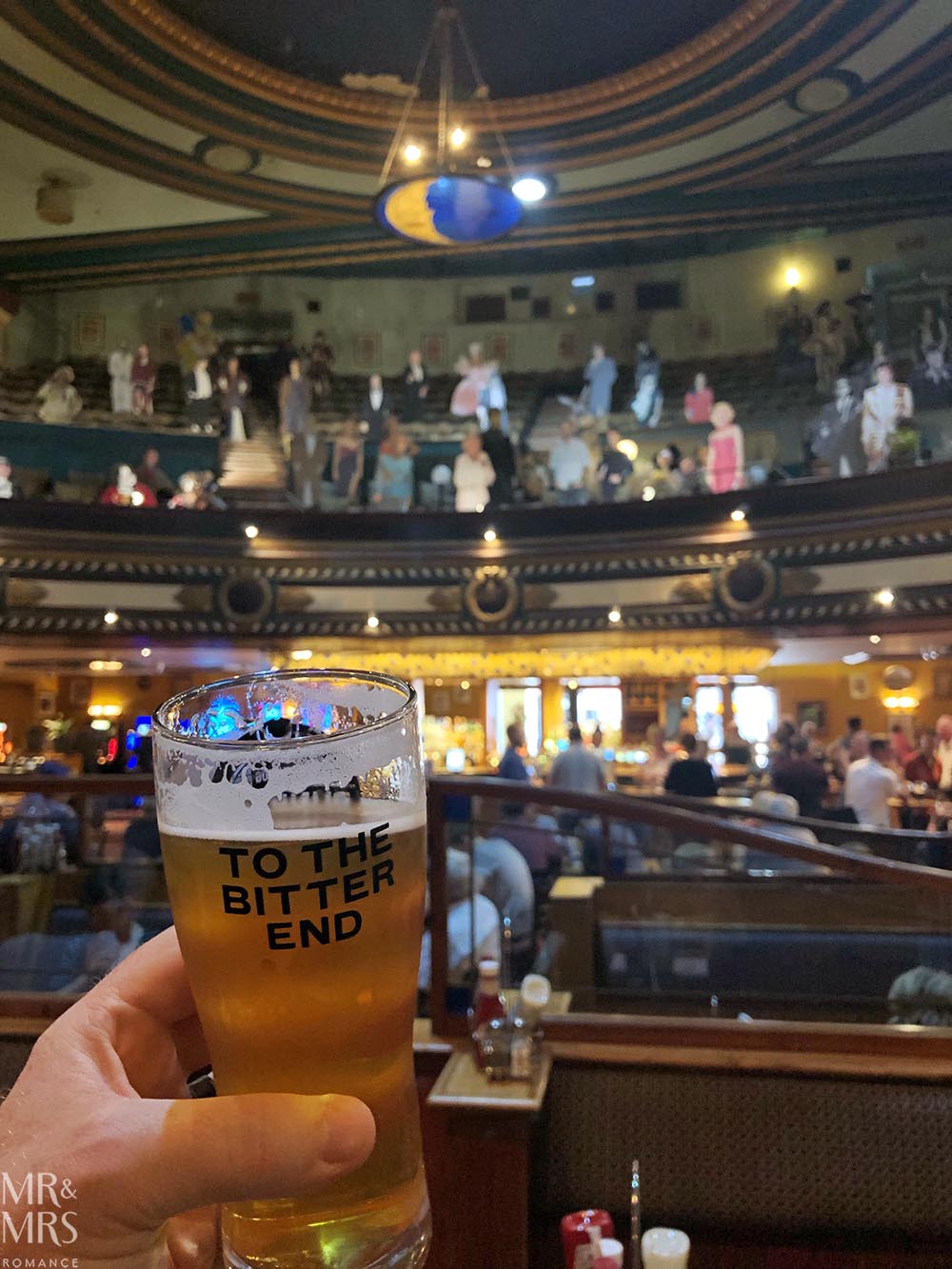 Next stop is the Playhouse. This place is an institution and has been since Weatherspoons opened it in the ’90s. It was once a theatre in 1929 and then a cinema and a bingo hall. 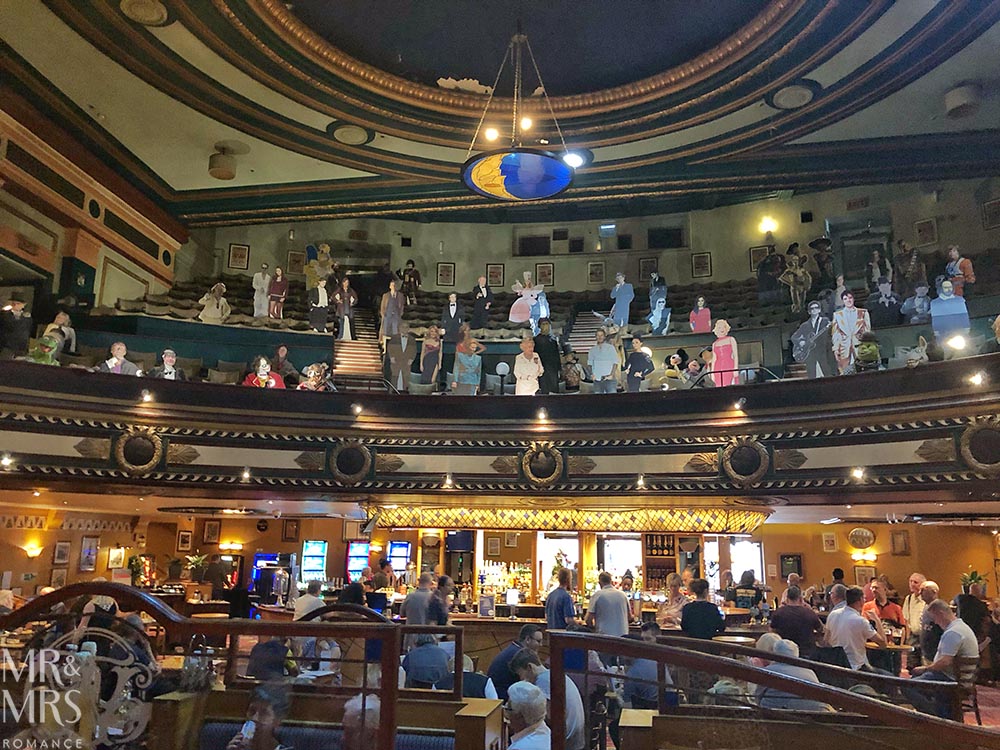 These days it offers punters probably the best deals around from behind the bar, and above it the nod to its previous life with the upper tier of seating populated by a strange collection of celebrity waxworks and cutouts ranging from Shrek to the Queen.

We’re happy to see the Playhouse thriving again. The last time we were here, the vibe had an unhealthy pallor only matched by its lacklustre patrons’. 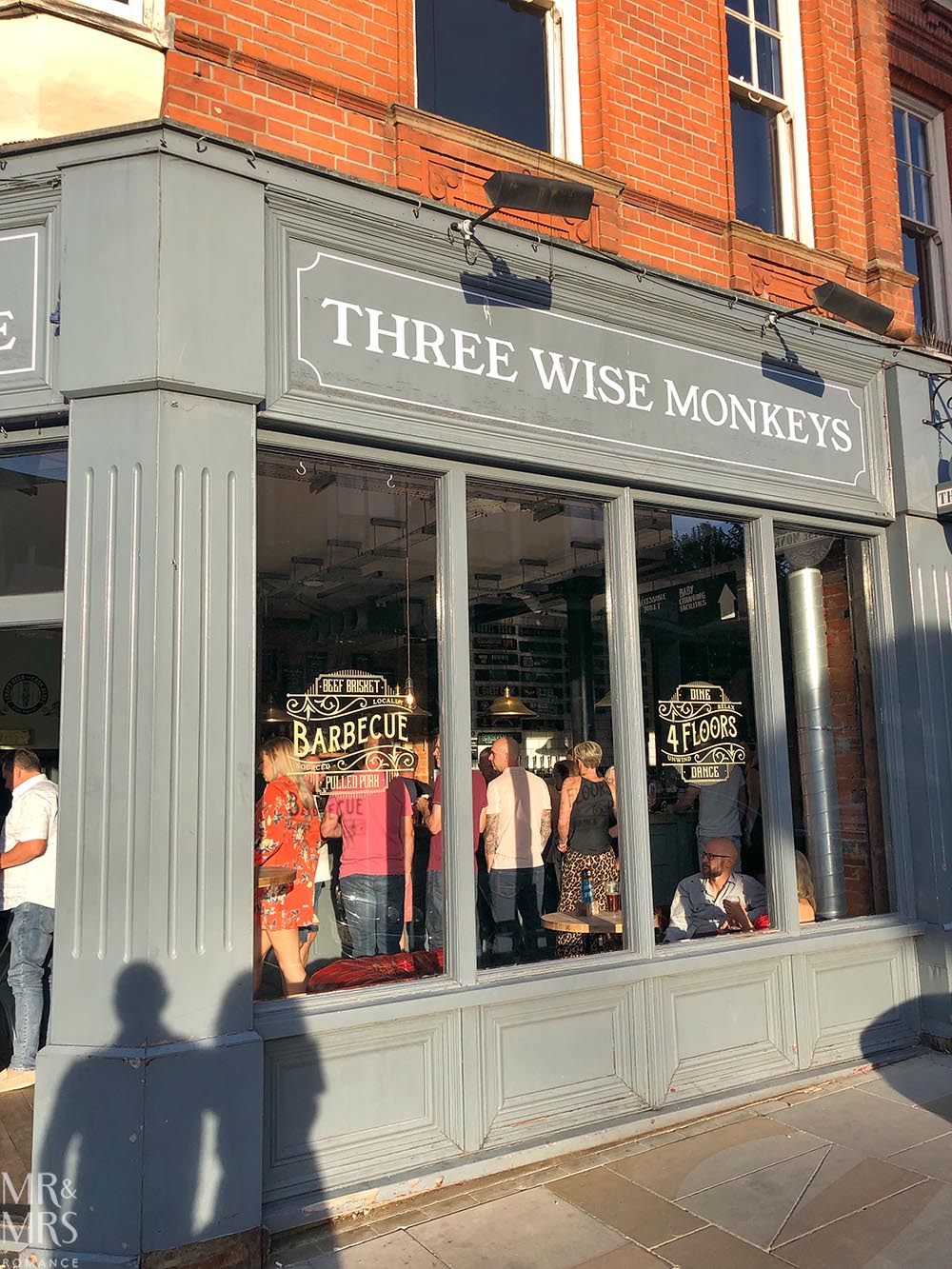 Our next stop on our little bar hop is at a relatively new place. The Three Wise Monkeys takes up a big corner block towards the end of Colchester’s high street, right back at the castle.

Its four flours (there’s a secret basement gin bar here open Friday and Saturday nights) offer a great range of drinks, including some local brews too. 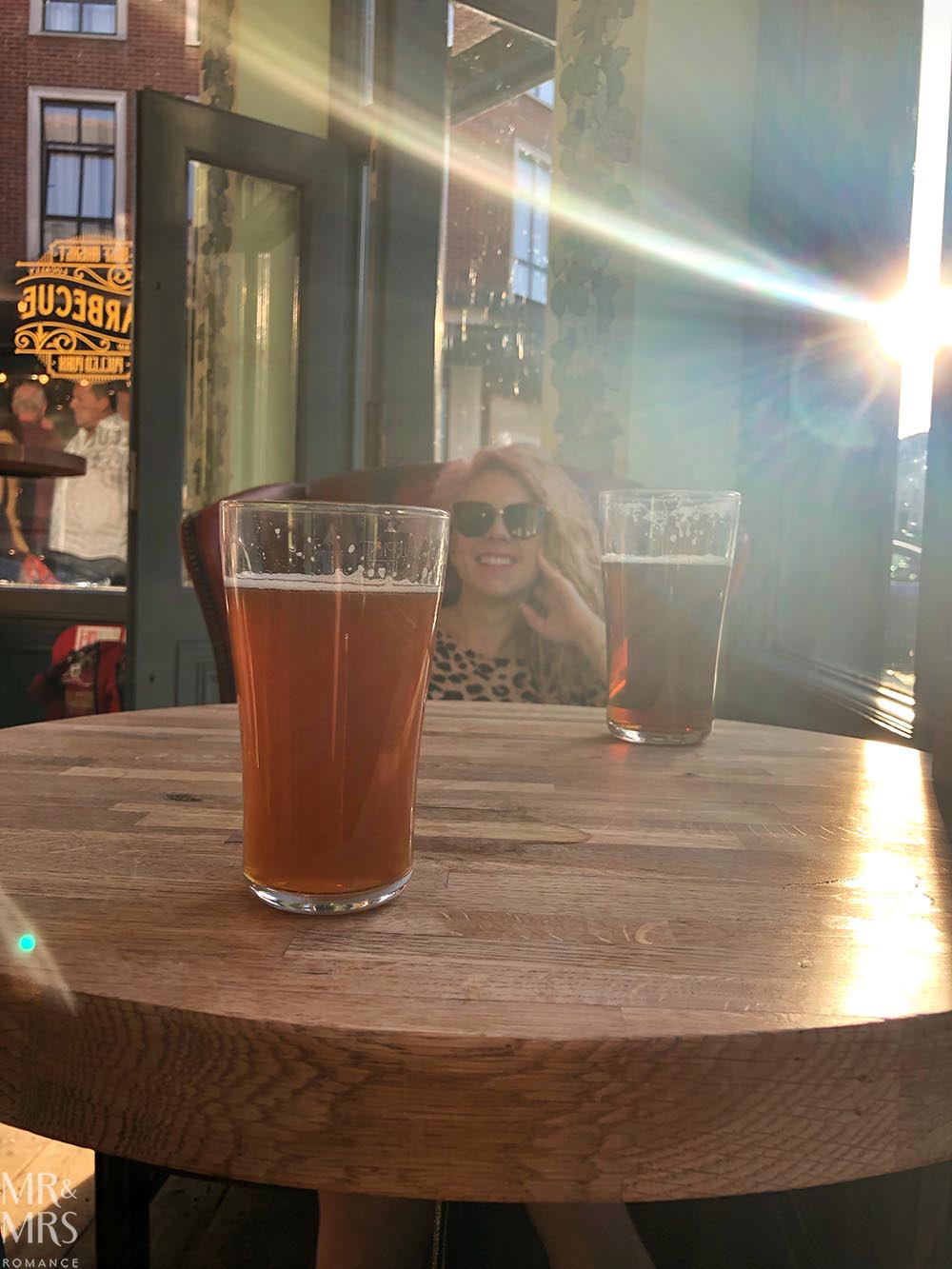 We’re excited to see there’s even a few beers from Colchester Brewery on tap. The Number One – a classic English bitter – is excellent and very drinkable.

If you check out their website, you’ll find the brewery has an impressive range of regular, seasonal and monthly beers going. 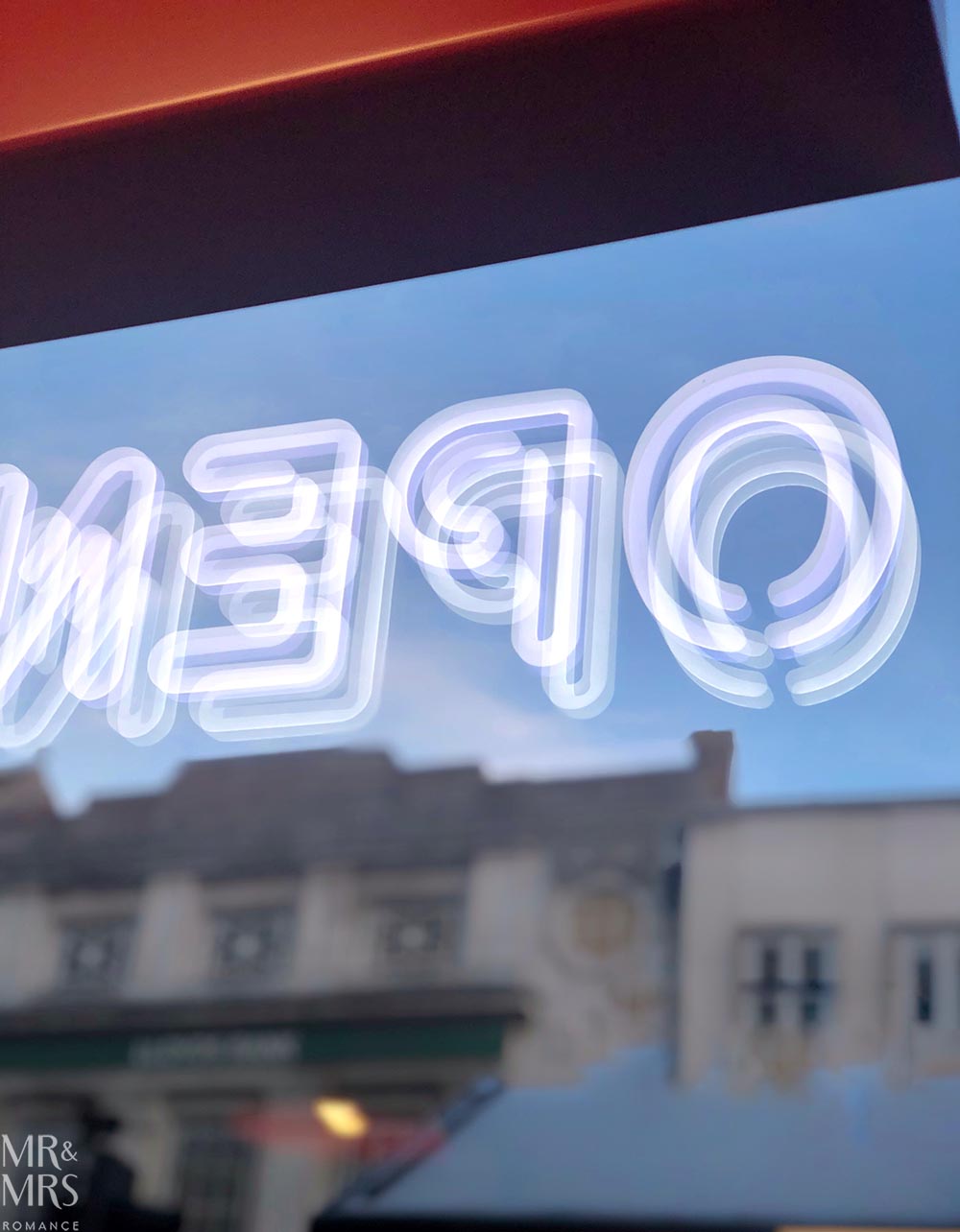 There’s only one more place on our list before we head for the hills. There’s a burger joint in town we’ve been thinking about ever since our trip to Miami.

Five Guys, which began life in Miami, has since gone international. We’ve been to the one in Glasgow and we’re excited about seeing the open sign on the one in Colchester. 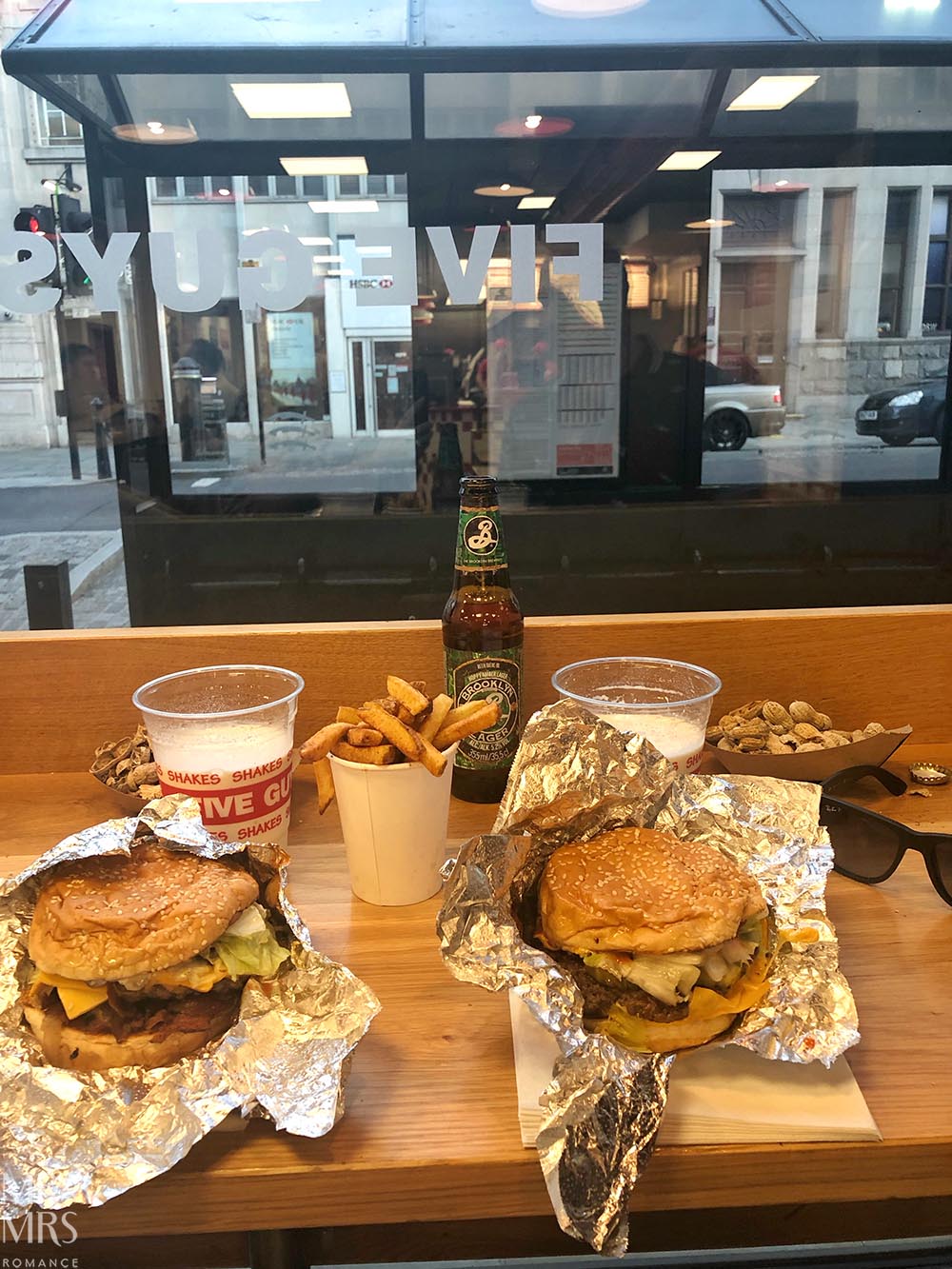 Burgers here aren’t particularly cheap, but they’re bloody good. The burgers are cooked to order on a proper grill rather than nuked like so many fast food chains do.

When you go to order, you choose the burger you want (there aren’t many options, but bacon cheeseburger seems the right decision) then you select your toppings. You can have as many as you want for free up to about 15.

You then order your drink and sides. We ask if a large fries is enough for two to share but we’re warned against it. A large is enough for four, so we order a regular and beers.

It’s then we notice the milkshakes. ‘Add bacon’ the menu tells us. Surely not.

But it’s true. You can bacon – actual bacon – crumbled into your milkshake. And I tell you what: it’s actually amazing. 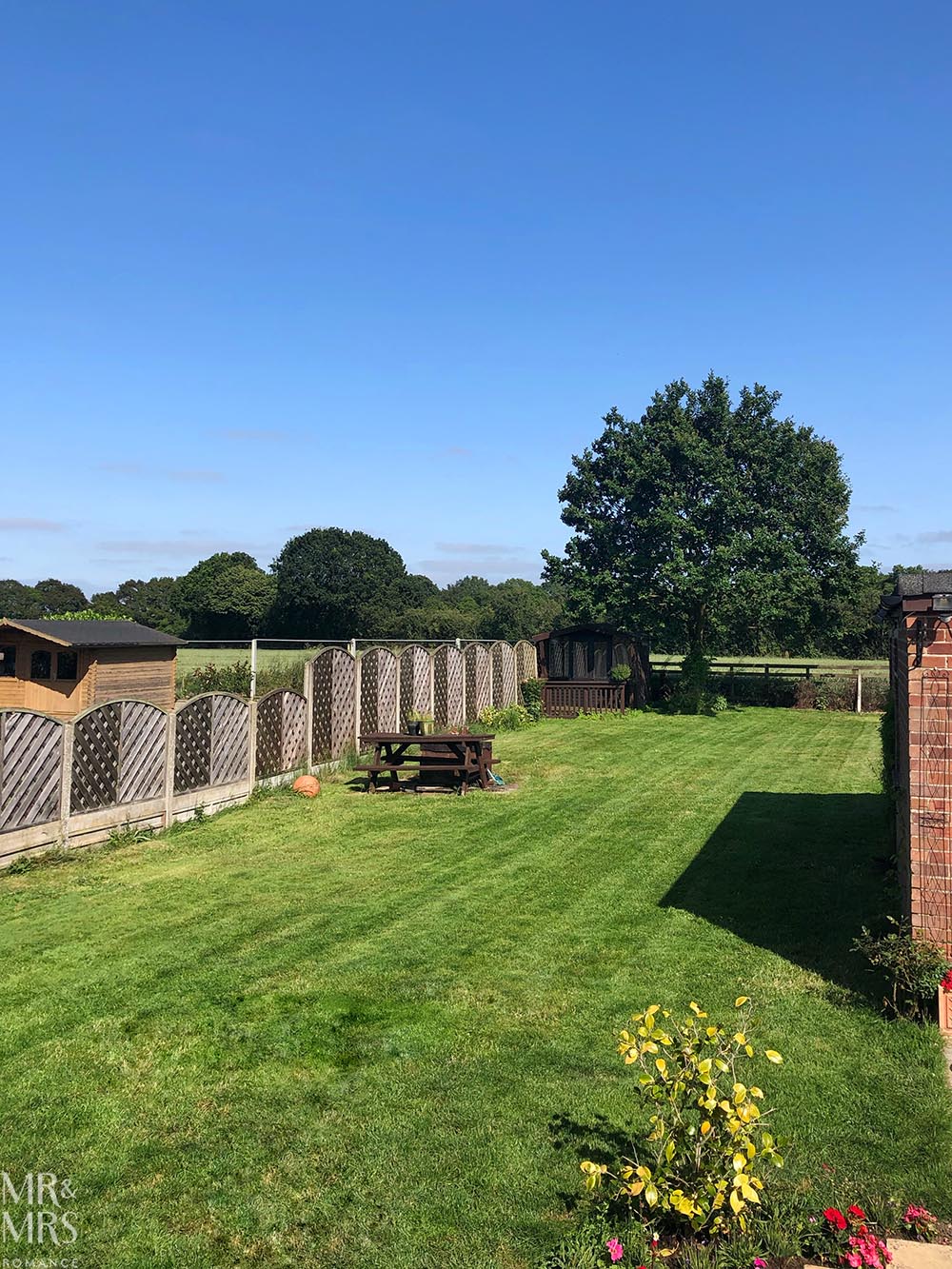 It’s not long now before Clare and Dave get home from their holiday. It’s time to clear the house of any evidence and tidy the garden. It’s supposed to be blisteringly hot this weekend, and rather than watch Dave shove the mower around, I thought I’d give it a go.

Living in an apartment most of my adult life has protected me from the trials of trying to start a petrol mower. I now know how – thank you Google!

Not a bad result for a first time, don’t you think?

Where to stay in Okinawa, Japan – JAL Private Resort Okuma

Words like ‘spacious’, ‘beachside’ and ‘resort’ aren’t what you usually associate with hotels in Japan, but then Okinawa isn’t your typical Japanese destination. And…