For 300 years, Blenheim Palace on the eastern edge of the Cotswolds, has seen iconic moments in British history come to life – not least the birth and betrothal of the Greatest Briton: Sir Winston Churchill. 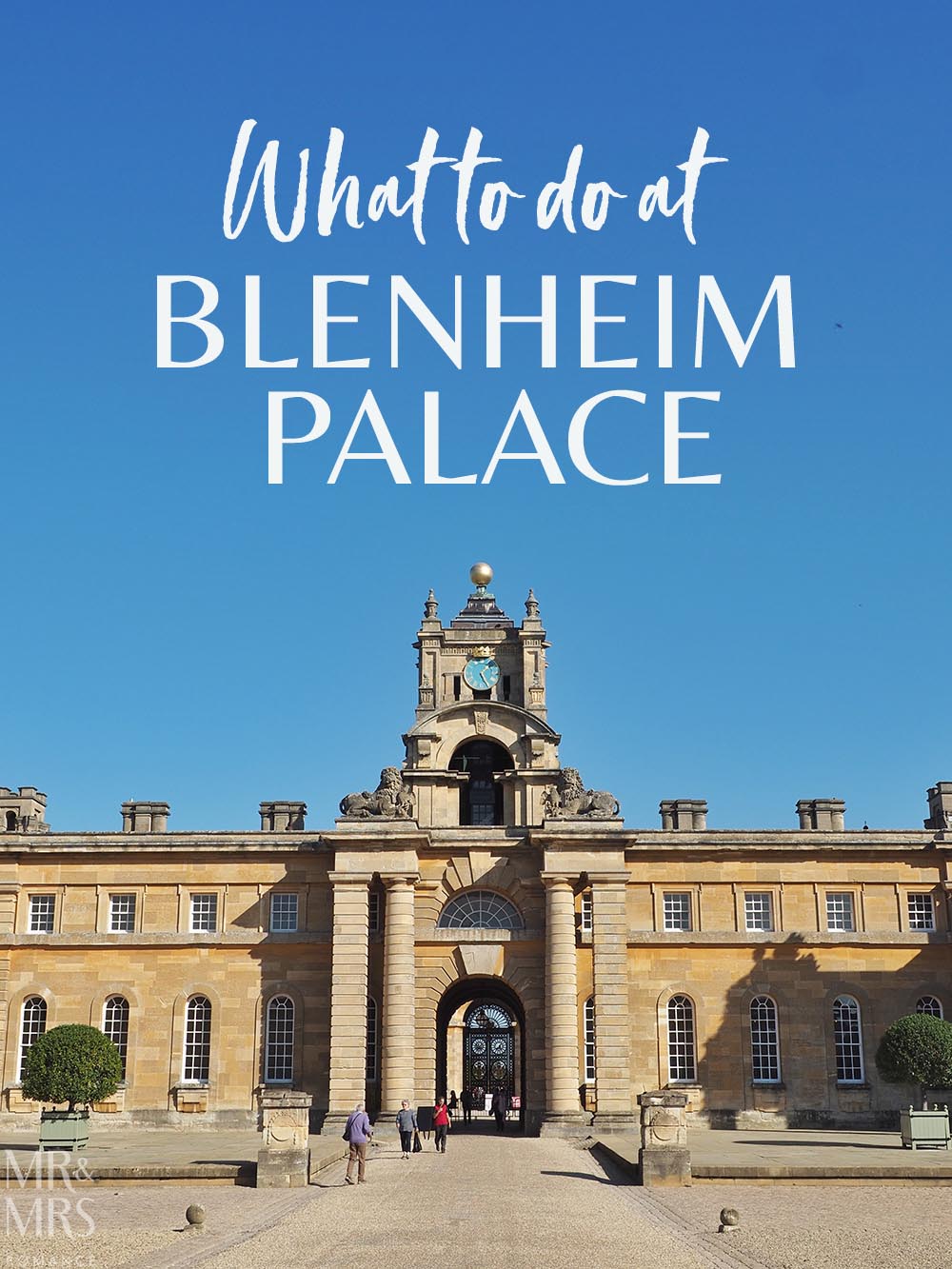 It’s hard to find anything more English than Blenheim Palace. It’s a stately home in the Cotswolds that was a gift from Queen Anne to John Churchill, the first Duke of Marlborough, for beating the French in a war over Spain.

The gardens were designed by a man called Lancelot and the palace lake was used by troops to practise the WWII D-Day landings.

Even more than that, it was the birthplace and home of Sir Winston Churchill.

Since 1950, Blenheim Palace has held its doors open to visitors from around the world – visitors who want to get a better sense of England and her heritage, and to feel closer to one of the most important (yet controversial) figures in the country’s modern history.

Blenheim Palace – a place of history and romance 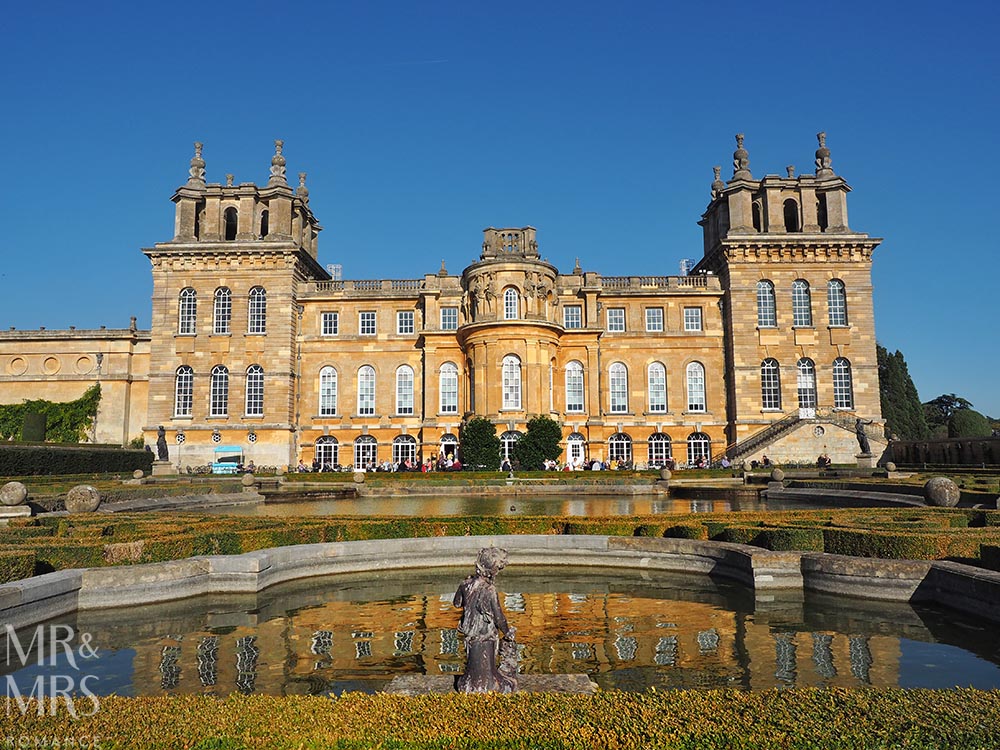 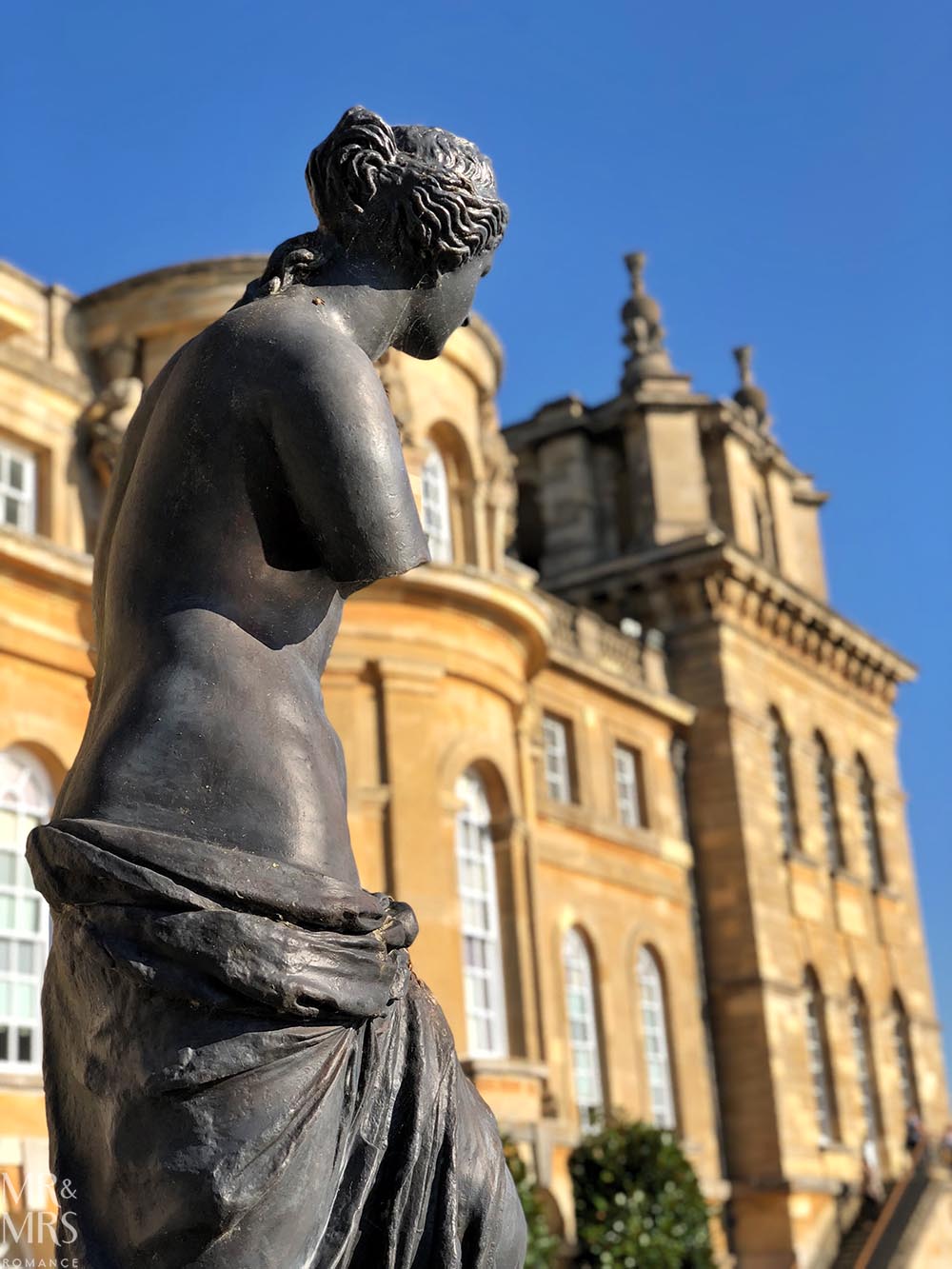 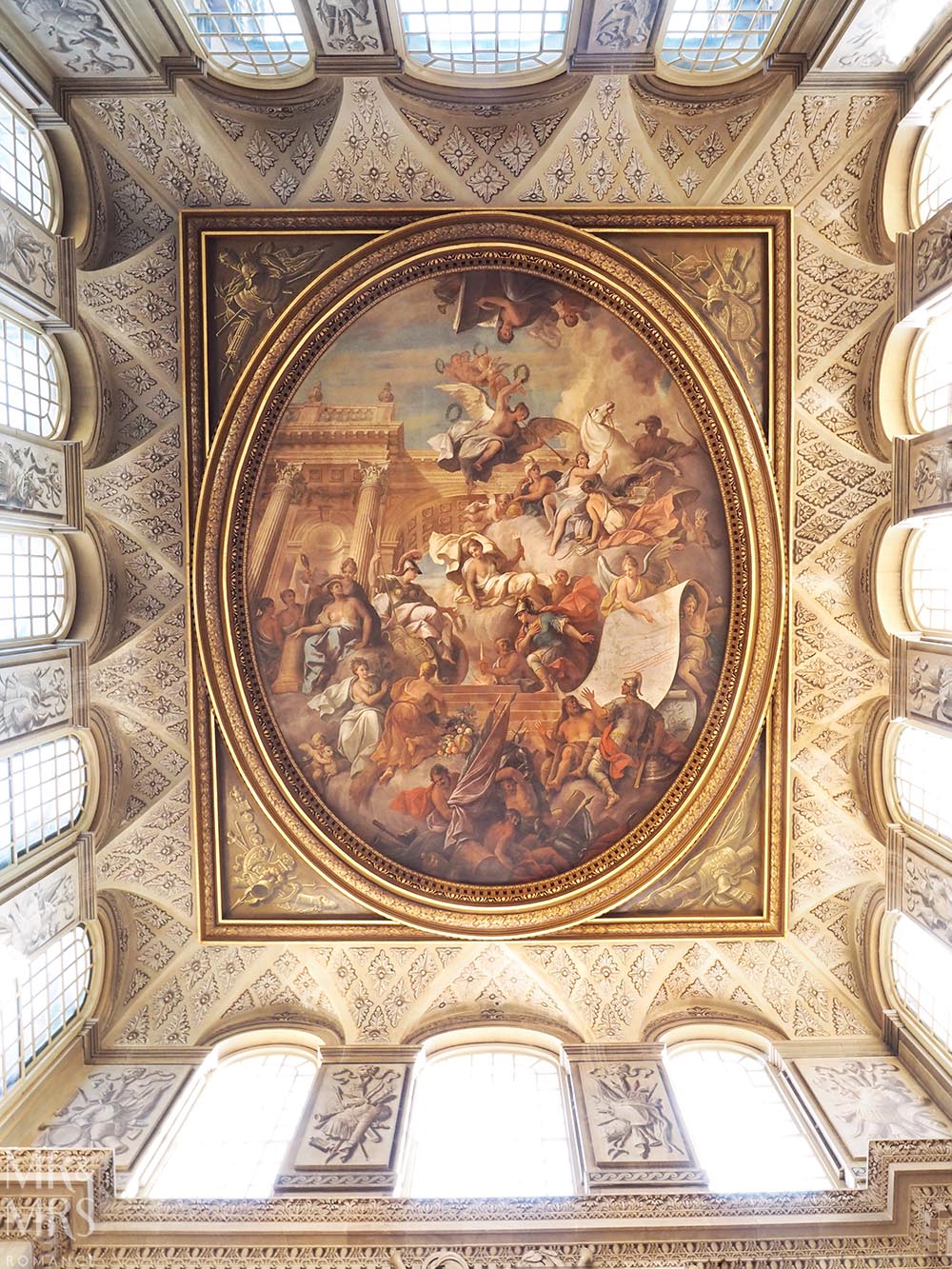 First and foremost, Blenheim Palace is a family home, full of all the same dramas and carry-ons that all households tend to have.

Of course, in its time, Blenheim Palace has also seen extraordinary things happen. It’s been a military hospital, an evacuation centre for children in WWII and even an HQ for MI5. It was also where Churchill proposed to his beloved wife, Clementine.

But even before Blenheim Palace was built, its predecessor, Woodstock Castle, was the site of many other births, deaths and marriages. King Henry I ordered the castle’s construction around 1130 and it lasted until its destruction in the Civil War in the mid-1600s.

After Queen Anne awarded the land and £240,000 for the rebuild to John Churchill (impressively, Sir Winston’s great-great-great-great-great-great grandfather), he spent 17 years on the project. His great-grandson – the fourth Duke of Marlborough also commissioned the genius of Lancelot ‘Capability’ Brown to landscape the enormous grounds and create the famed palace lake.

The result is an extraordinary building filled with a fascinating sense of history. Somewhere between a Harry Potter castle and a Downton Abbey set, Blenheim Palace brings millions of visitors every year eager to investigate its many corridors, rooms, lawns and meadows. 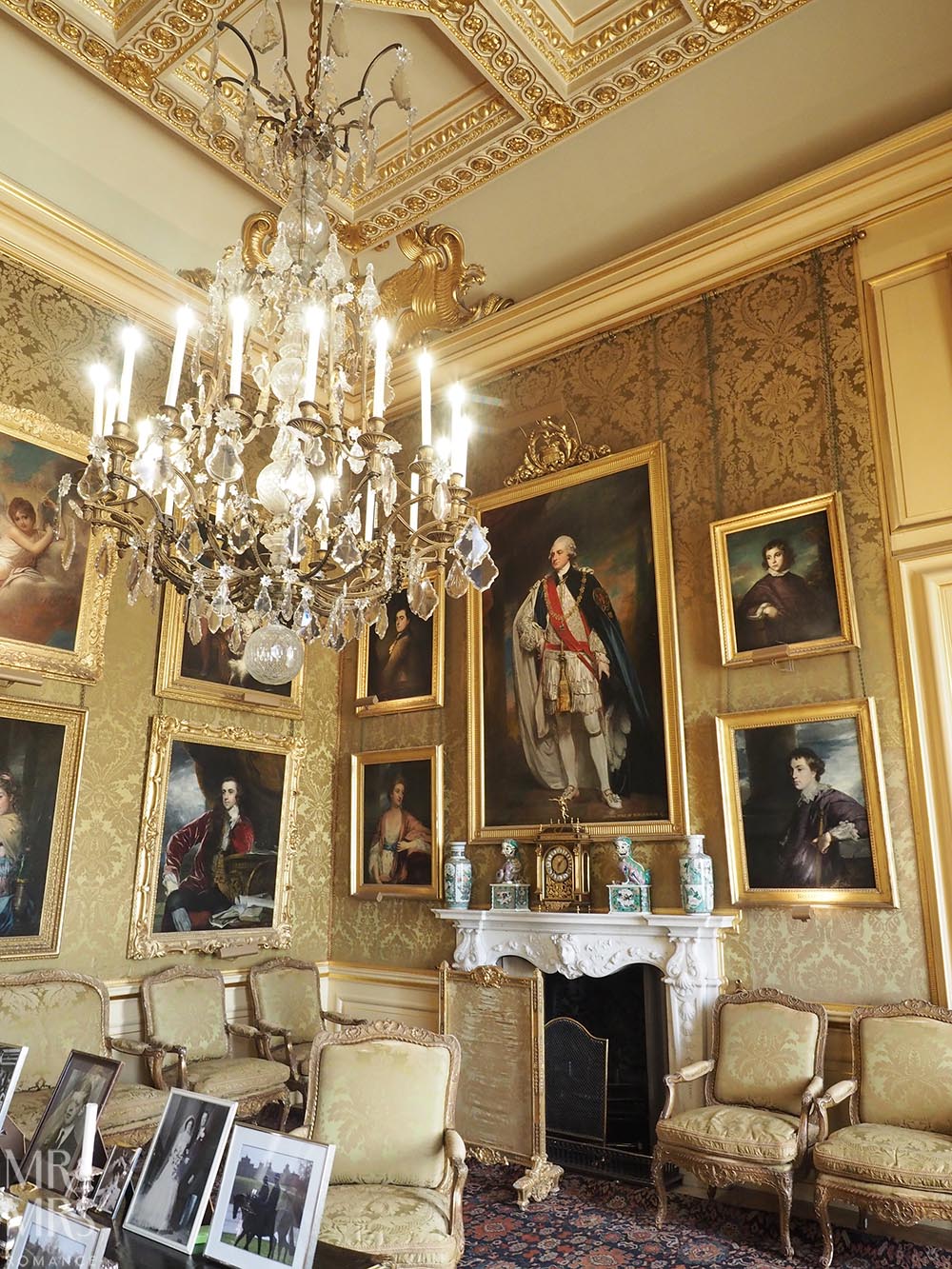 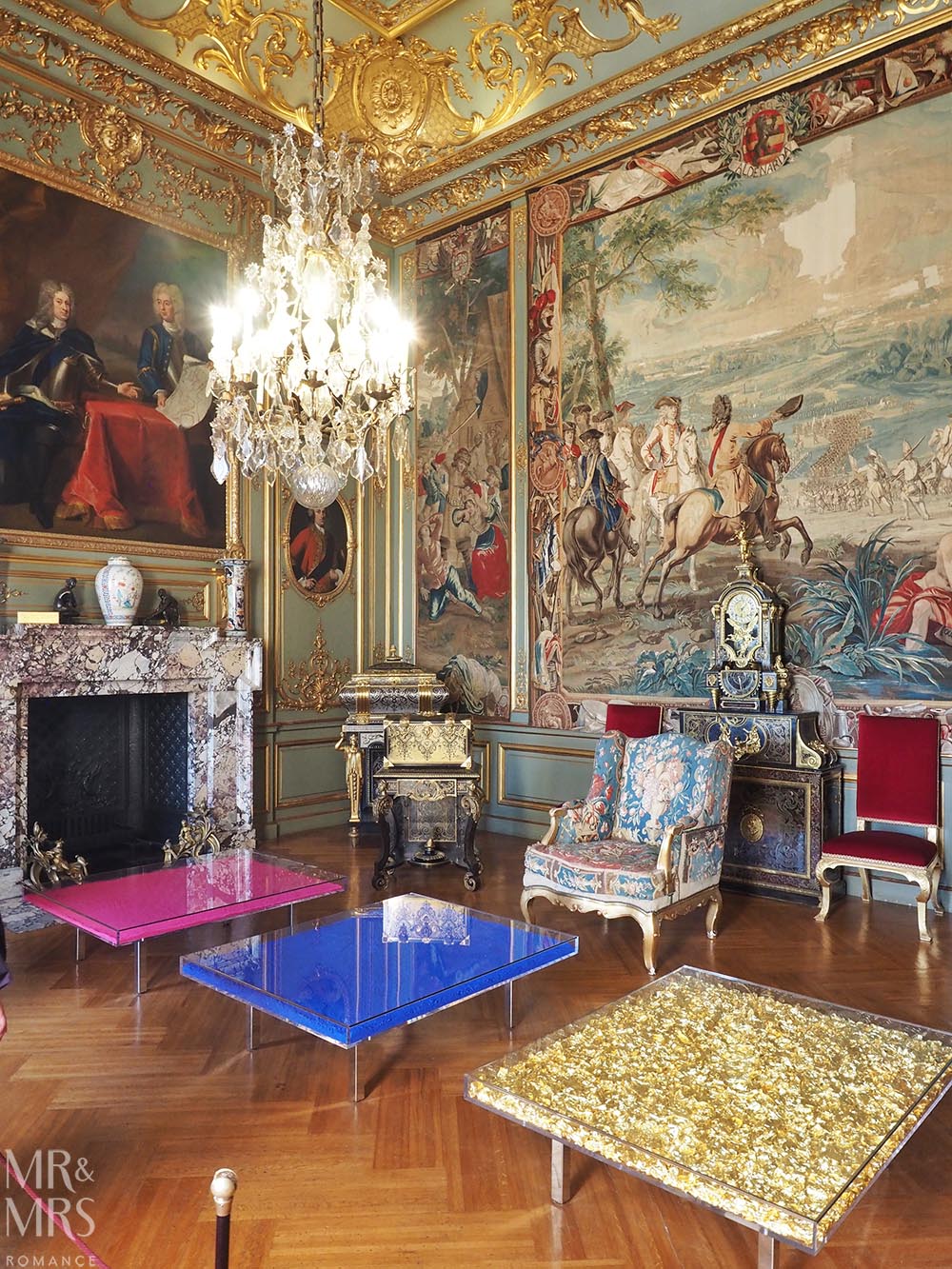 Be prepared to spend a whole day looking around the palace. It’s an enormous building full of information and incredible sights, and the grandeur of the palace grounds is too beautiful to ignore.

You might also see artwork in the palace that seems slightly incongruous to the grand old theme of the place. That’s because Blenheim often hosts famous artists’ collections and music concerts.

When we were there, the dramatic cobalt of Yves Klein’s International Klein Blue was on exhibition throughout the palace, punctuating the sumptuously furnished rooms and halls.

Here are our recommendations for getting the most out of your time at Blenheim Palace:

Do the audio tour 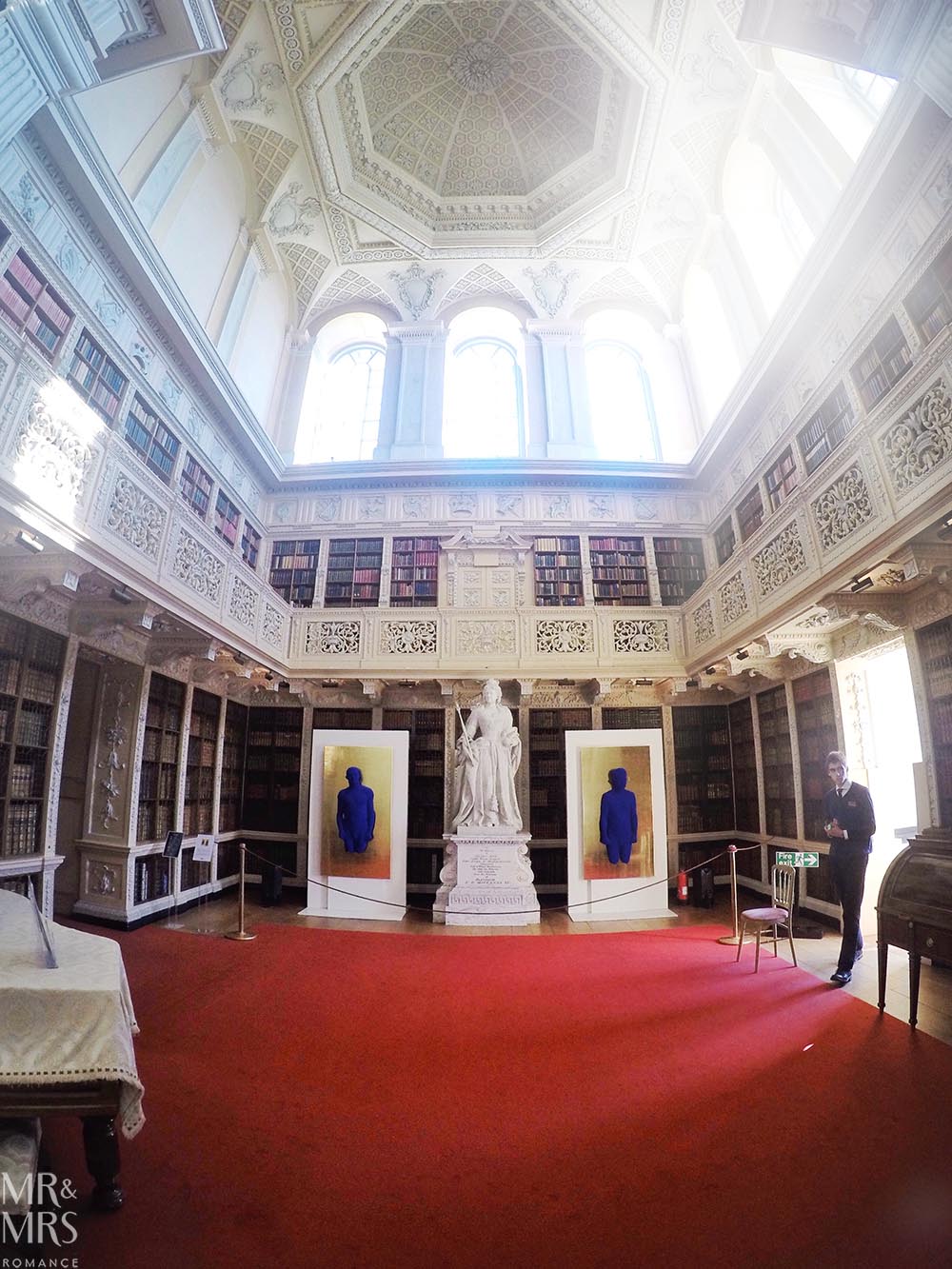 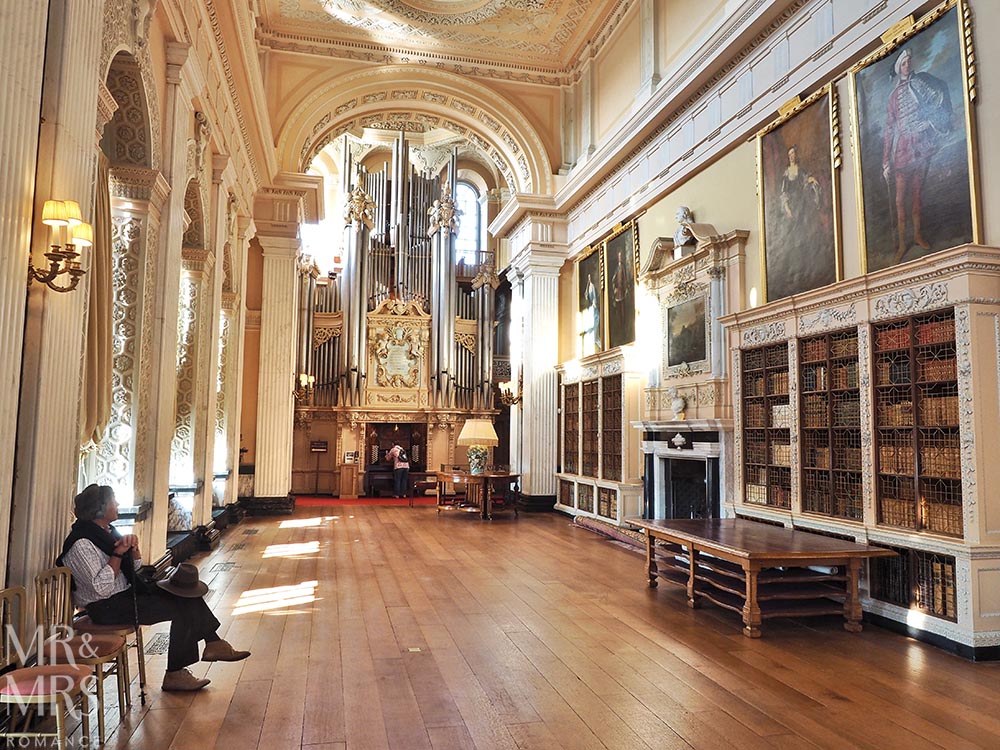 The wealth of history and information collected from such a prestigious family over the last three centuries is overwhelming. There’s so much to take in.

To make things a bit easier to digest, there is an audio tour that takes you through the main parts of the palace. The tour explains many things from important architectural points and artworks to family lineage and how Sir Winston Churchill and Lady Diana are directly related.

The audio tour is included as part of your entrance fee. 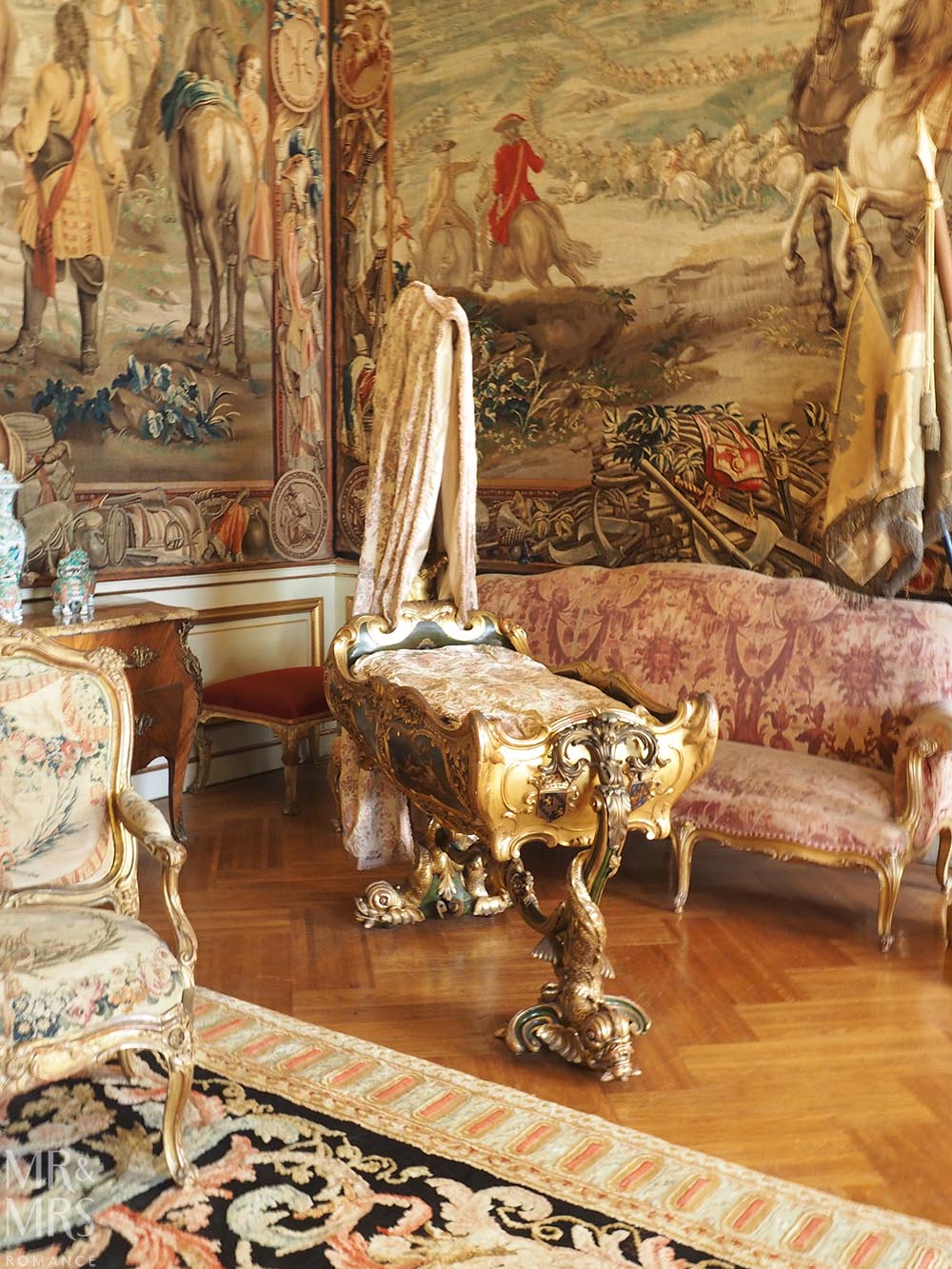 Also included in your ticket is the Untold Story tour – a cleverly developed narrative of Blenheim’s 300-year history. The tour is an animatronic interactive trail through several rooms in the palace, led by the spooky countenance of a servant of the first Duke of Marlborough.

As well as the palace’s history, the tour goes into the politics, gossip and nuances of the personalities that have lived there over the centuries.

The tour itself is a bit kitschy and at times it feels like a grotesque Christmas window of a department store. The jerky repetitious movements of the motorised models and their waxwork faces can be a bit strange.

But this tour is fun and a good way to get to grips with all the things that have gone on in this edifice of English history and brings it all to life. 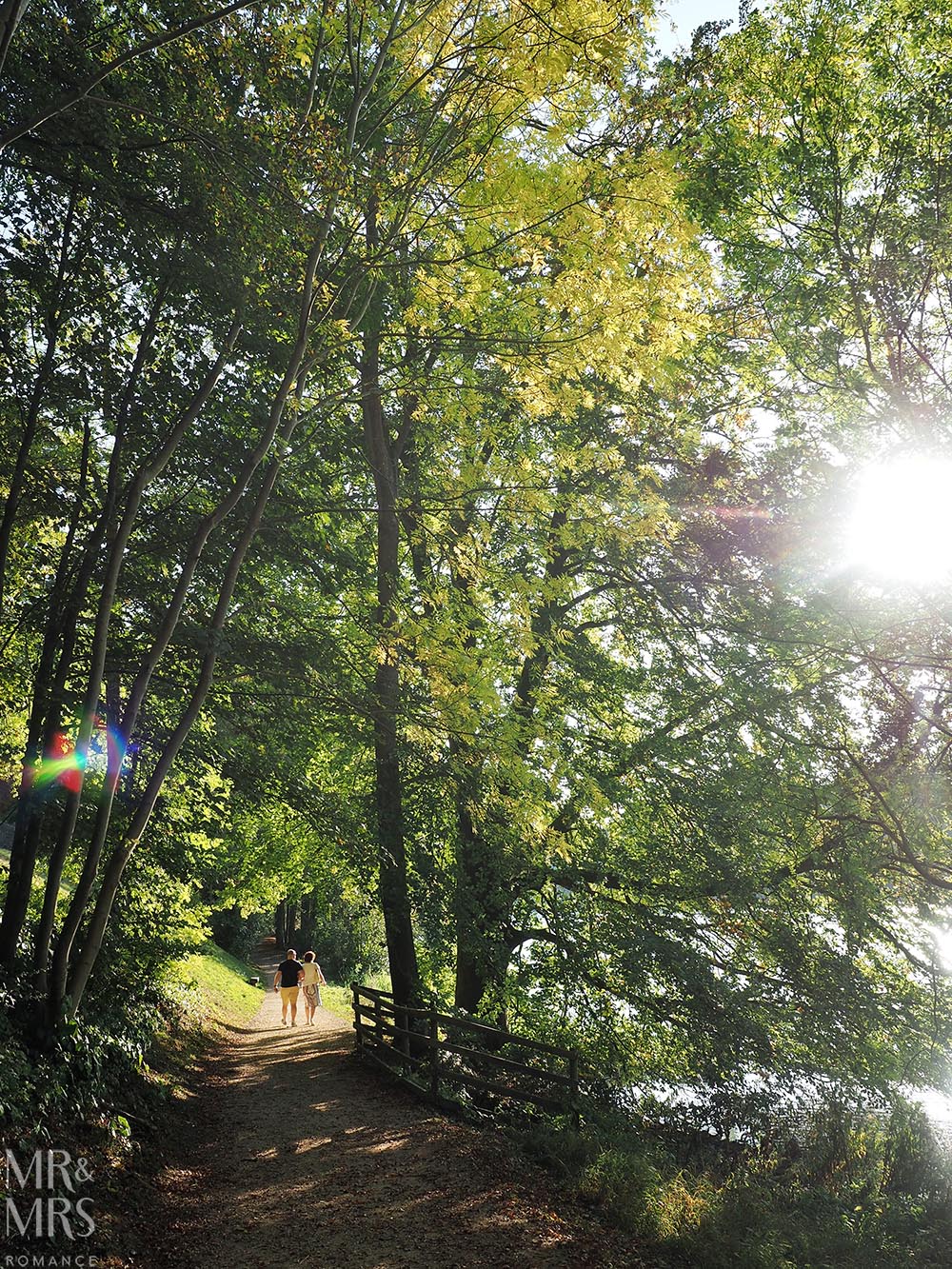 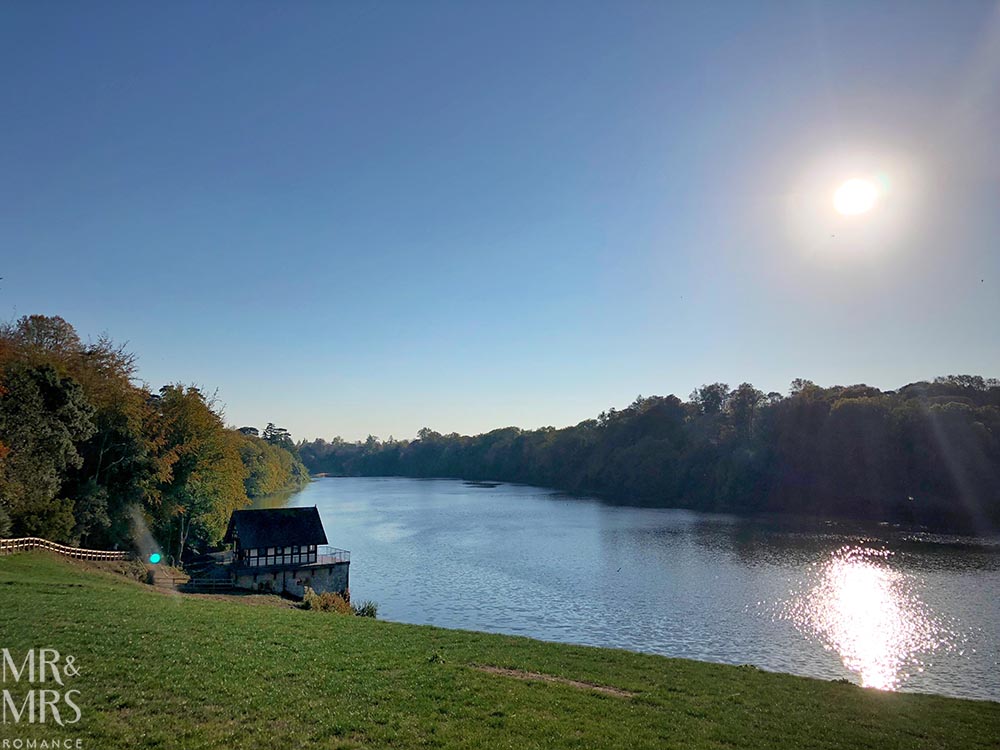 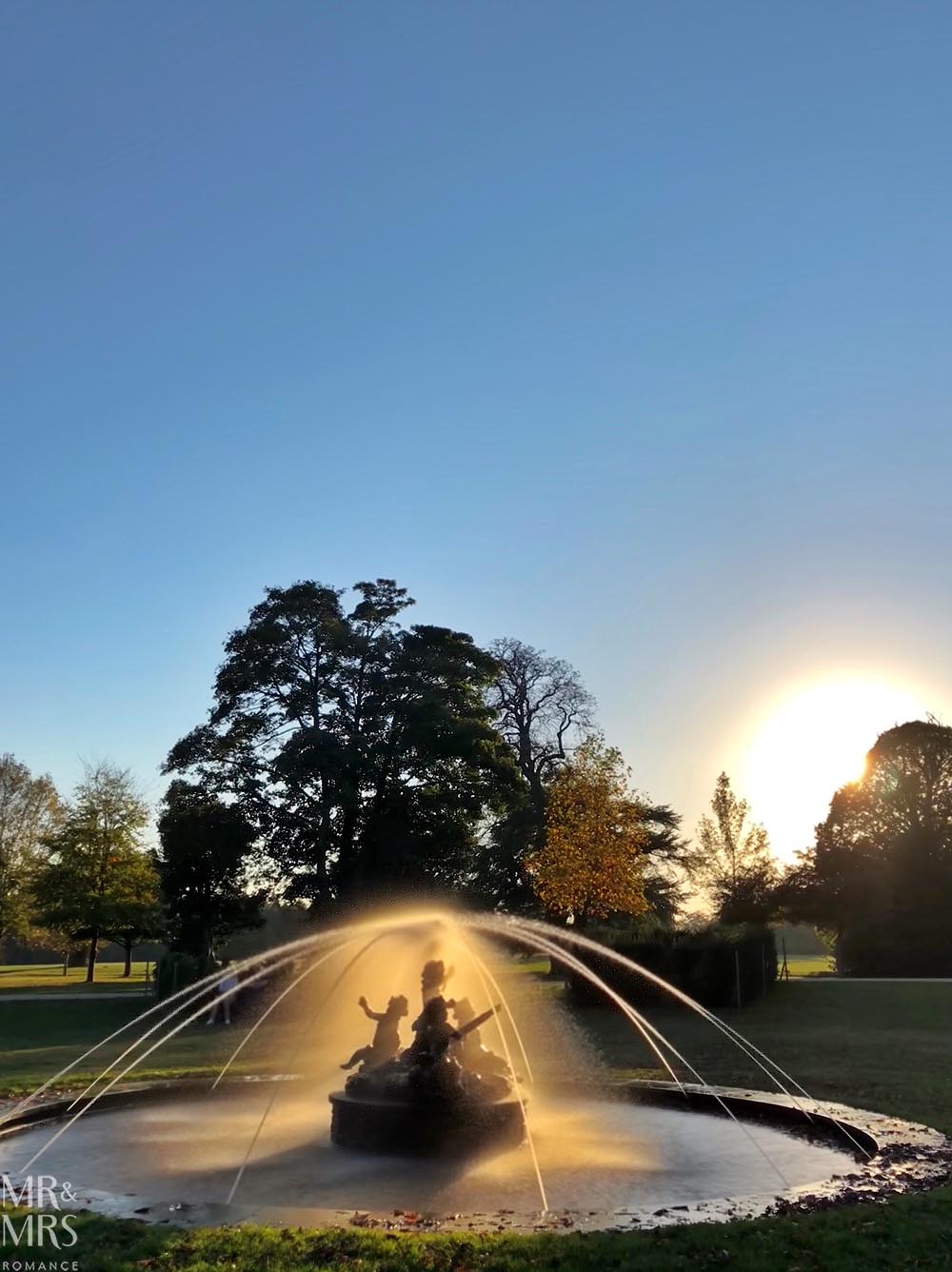 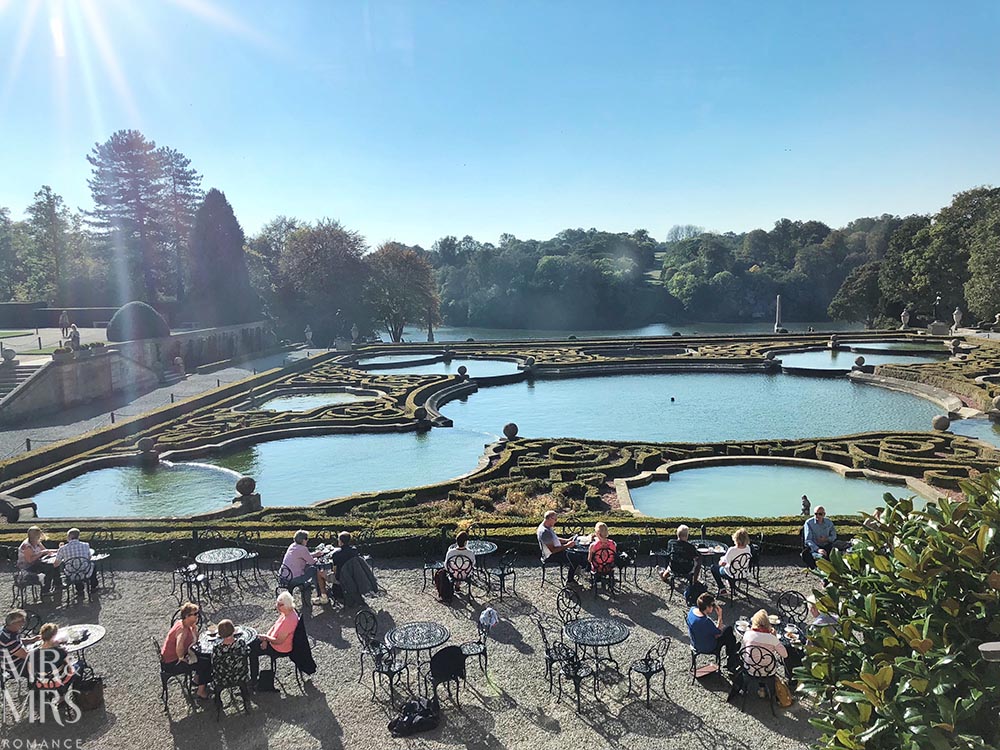 If you’re in the mood for walking, the gardens and grounds designed by ‘Capability’ Brown during his 10-year tenure at Blenheim (from 1763-1773) are truly stunning. Walk around the lake shore, which is man-made by the way, and wander the ornate tree-filled gardens surrounding the palace.

It’s easy to get lost in the grounds (as we found), so make sure you have a map and your location services on your phone turned on!

Other tours you can do 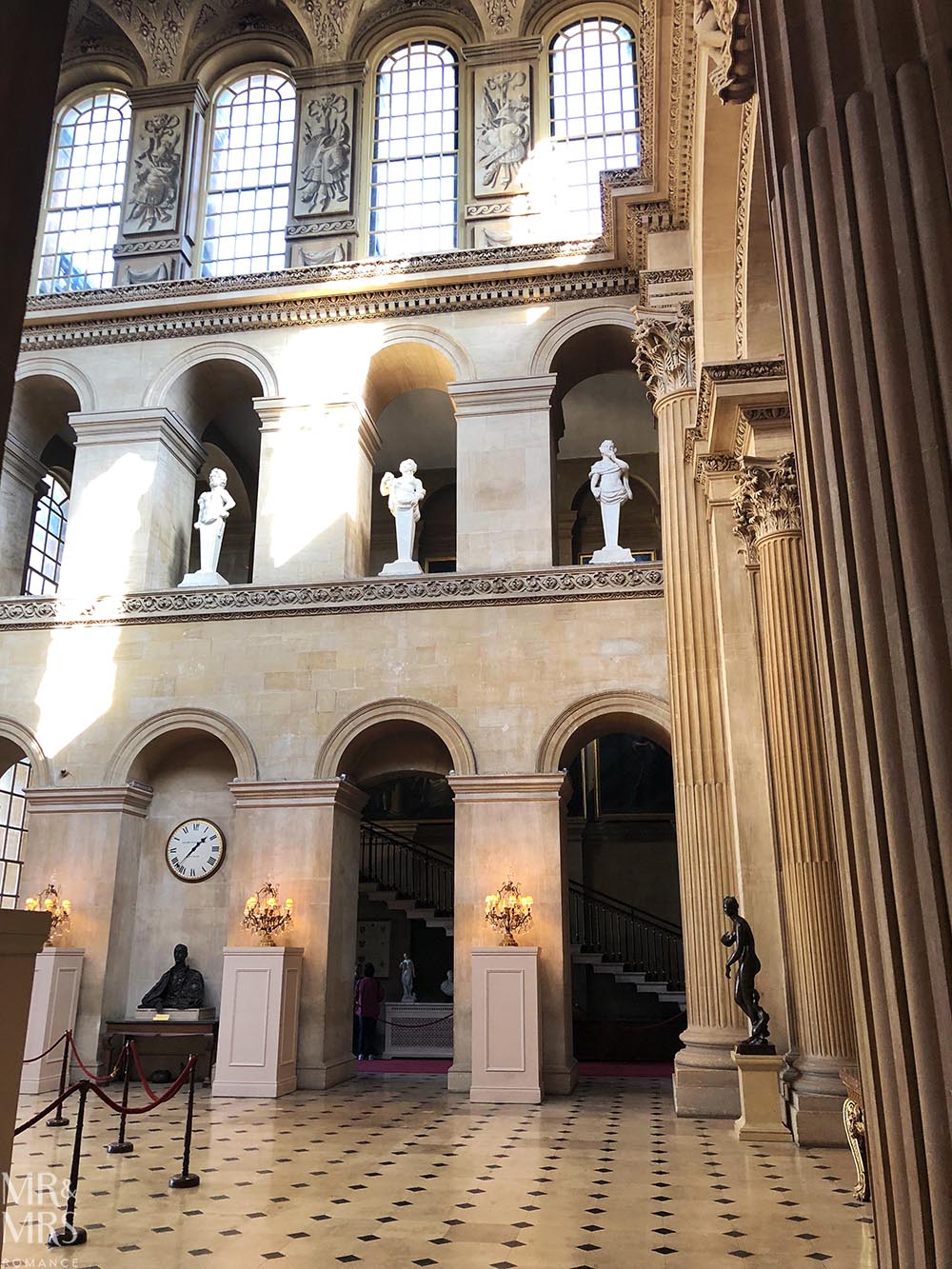 There are many other itineraries you can follow to learn more about Blenheim Palace and its denizens. Check out the Blenheim Palace website for more ideas and information. 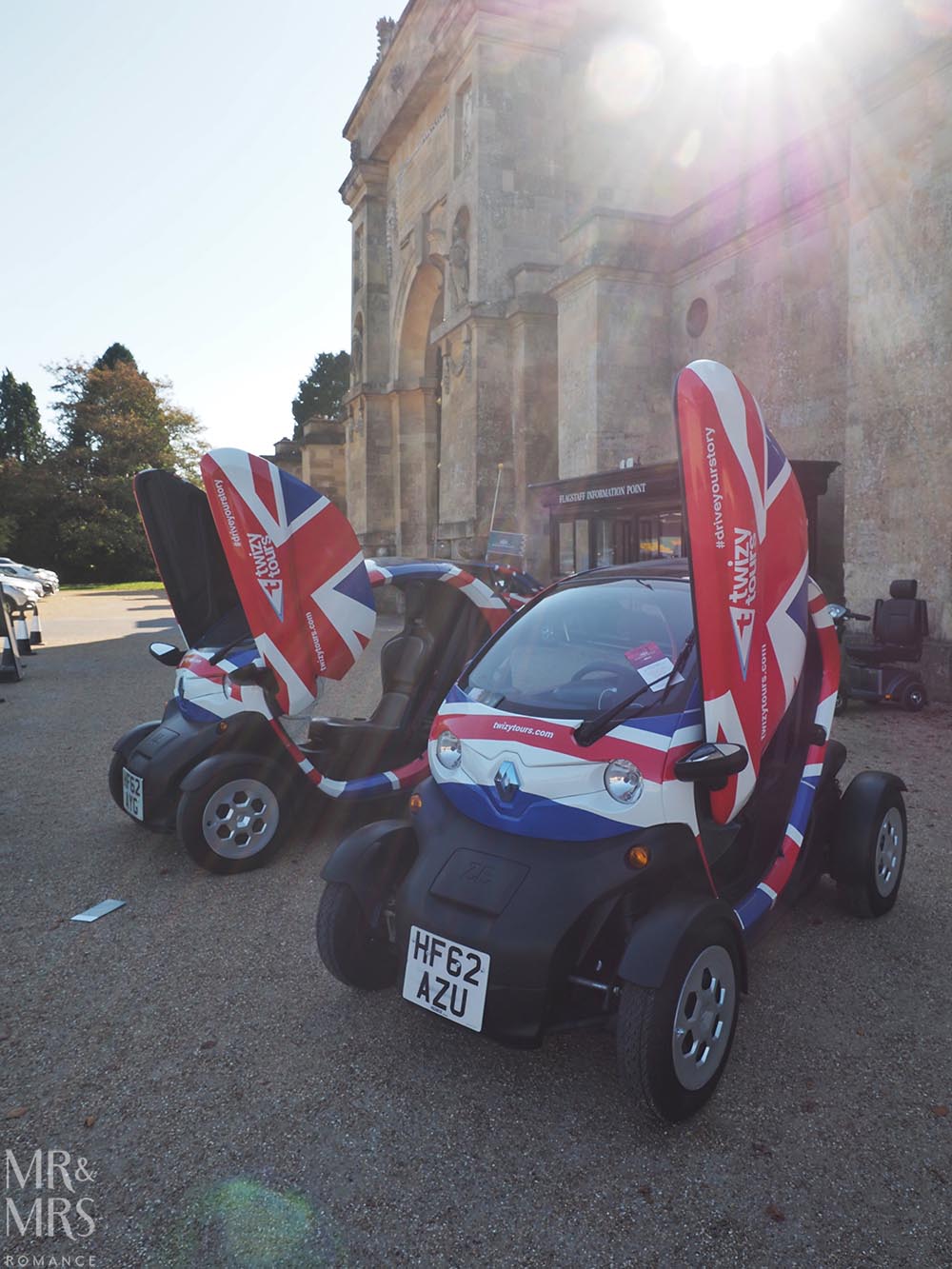 If you want the bigger picture of the palace and its history, you can hire two-seater electric cars and drive around the grounds. The tour also takes you out on the road down to nearby Woodstock, all the time narrating facts and stories about Blenheim Palace and the Spencer-Churchills’ heritage.

Make sure you leave enough time for this tour – it takes around an hour and a half. This is not included in your entrance ticket. 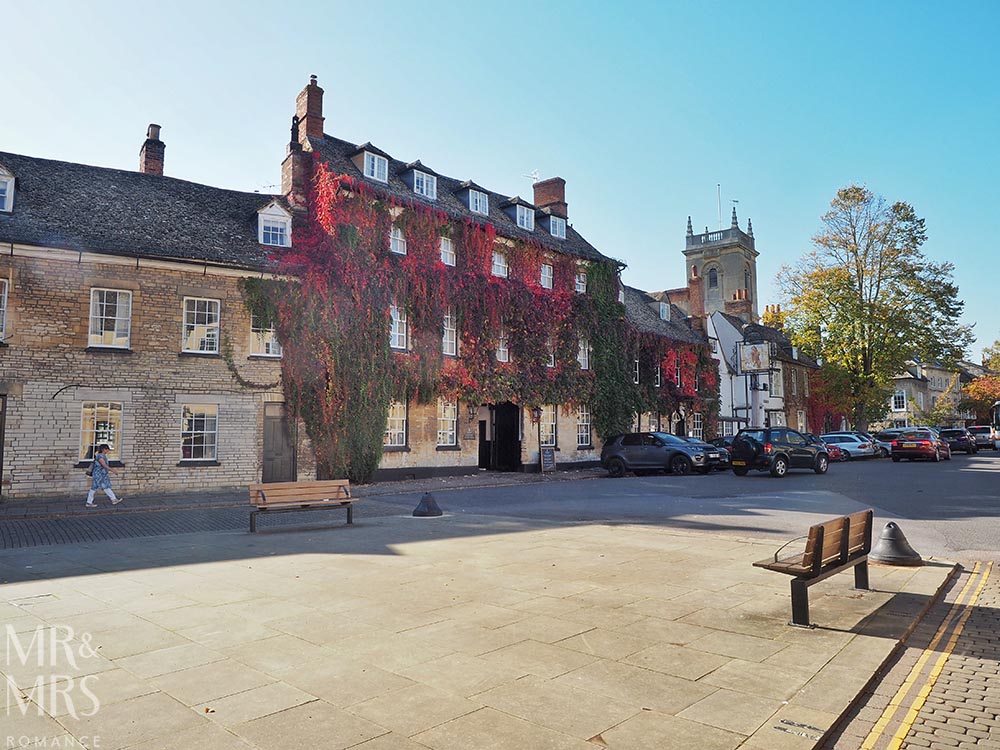 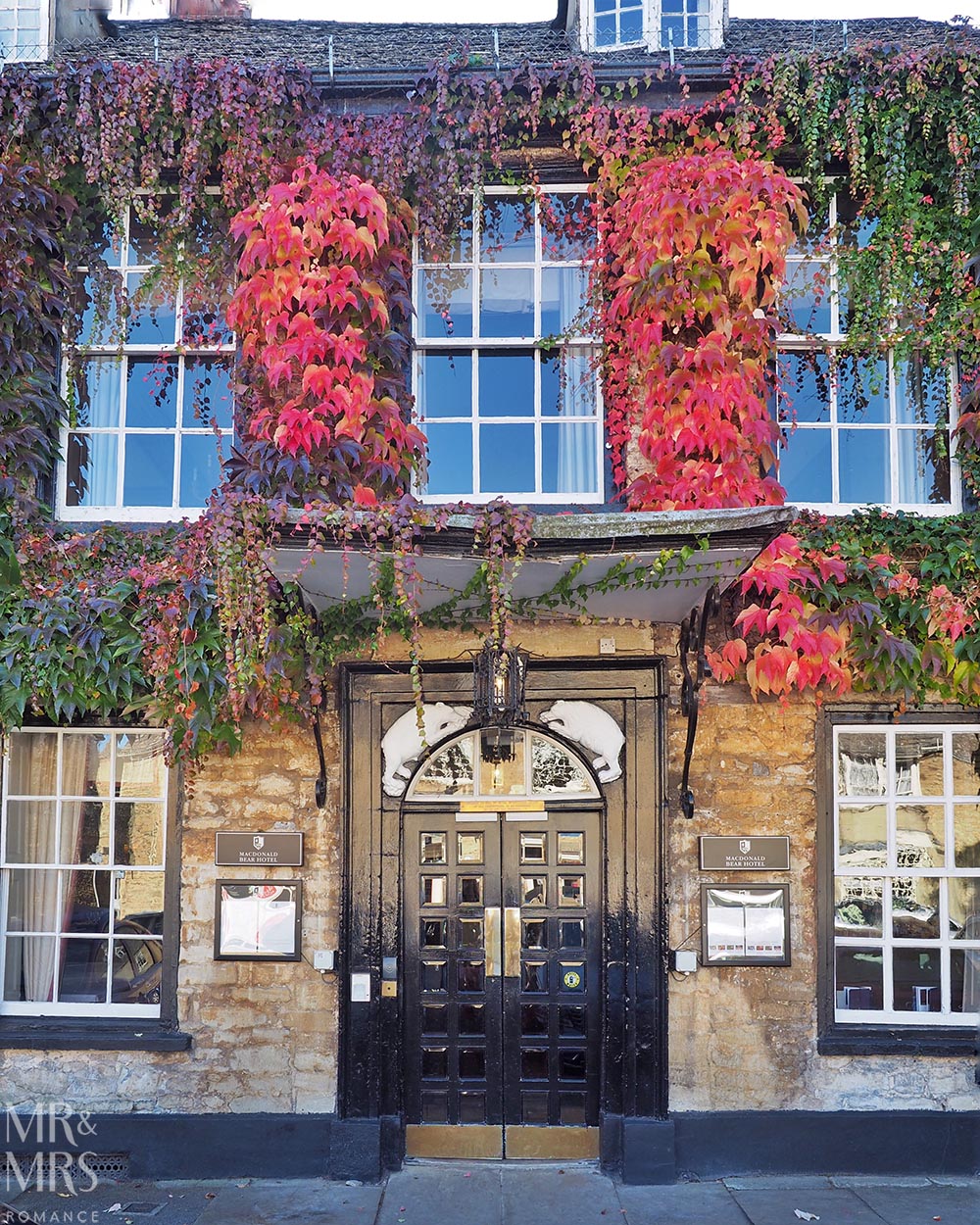 Make sure you also leave enough time to visit Woodstock while you’re here. This quaint village is packed with Cotswolds charm. Leafy, ivy-covered buildings, interesting little laneways and some excellent tea rooms are a fine match for the old-world grandeur of Blenheim Palace.

Our recommendation is to get in early at Hampers Food and Wine Co – a deli-style café that wouldn’t feel out of place in Australia. Yes, that means their coffee is really quite good. 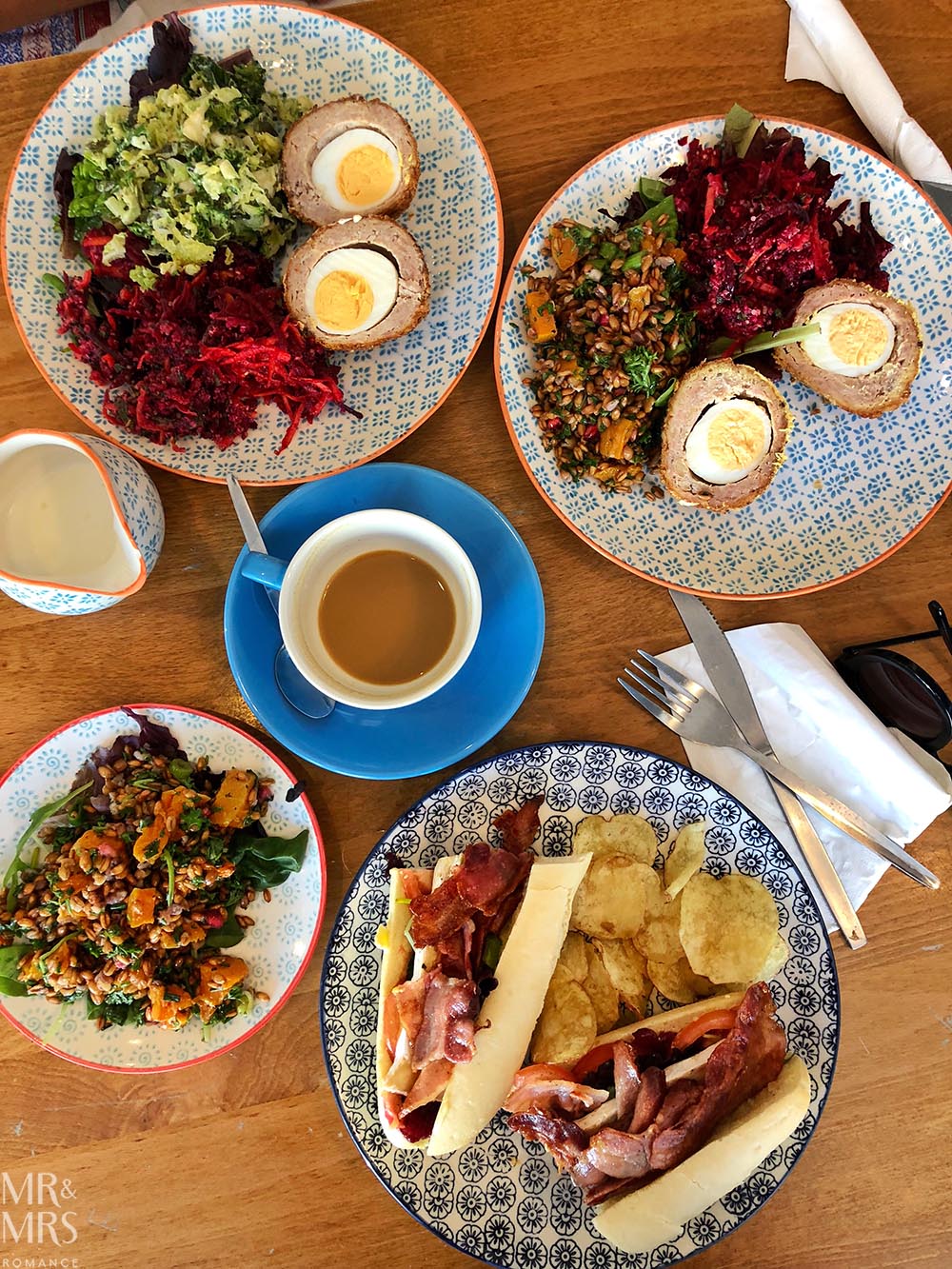 But even better are the sandwiches, salads and surprising range of scotch eggs – all made in-house. The lunch menu is generous in its format – you can either mix and match three different salads or add a quiche, scotch egg or sausage roll to two different salads.

Servings are big here too, so you can even share… if that’s your thing.

Through the café into the delicatessen, you’ll find a beautiful array of food to buy if you want to make up a picnic.

There are food options at Blenheim Palace itself, and there’s nothing like a cream tea and a cuppa on the terrace overlooking the lake. But I wouldn’t rely on the palace kitchens to deliver your best meal. Leave that up to Hampers! 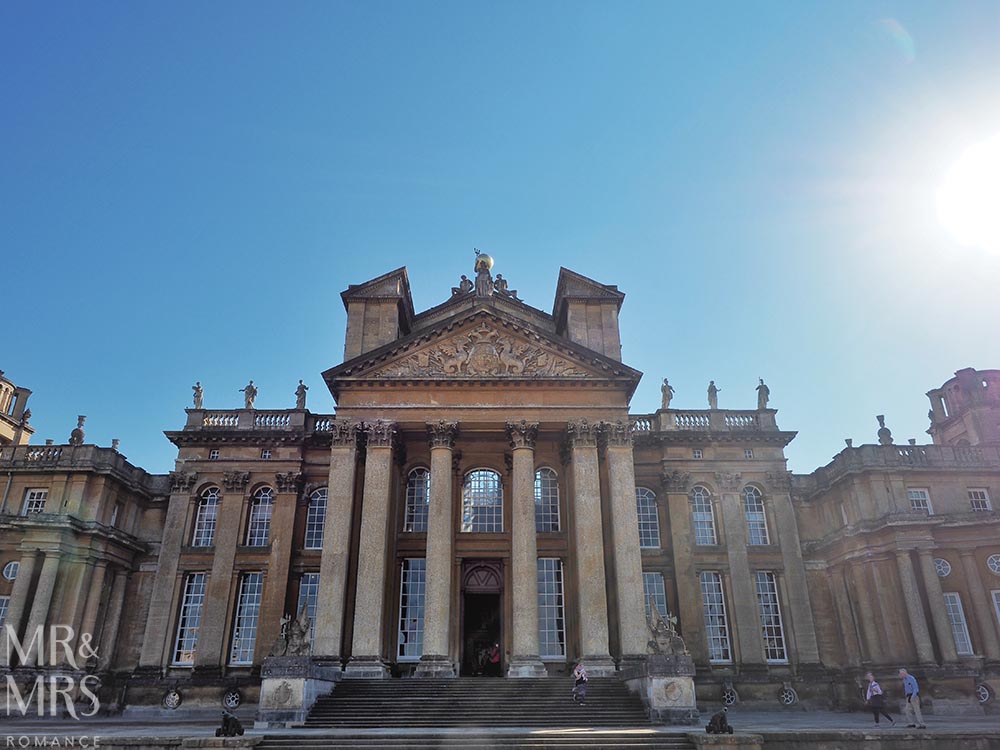 Now a UNESCO Heritage Listed Site (since 1980), Blenheim Palace is the only building in the country with the title of palace that’s not connected to the royal family or the church.

Blenheim Palace is a true icon of England – its heritage, its history and its countryside. And if you’re a fan of Churchill, it’s almost like coming home.

If you enjoyed this story and you’re looking for more of our features on the UK, keep on scrollin’!

– Beyond London: the best medieval village in England
– Boating holidays in the English countryside – how to explore the Norfolk Broads in a day
– Where to drink in London – the Churchill Arms, Kensington
– And here’s our full library of stories from the UK

Kyoto, once the capital of Japan, is one of those places that gives the true culture of its country. This is no less apparent…