If you thought waffles should only be sweet or – at a push – have bacon and a bucket of maple syrup on, then this story will be a revelation to you. Here’s how to eat proper Belgian waffles and where this iconic dish came from. 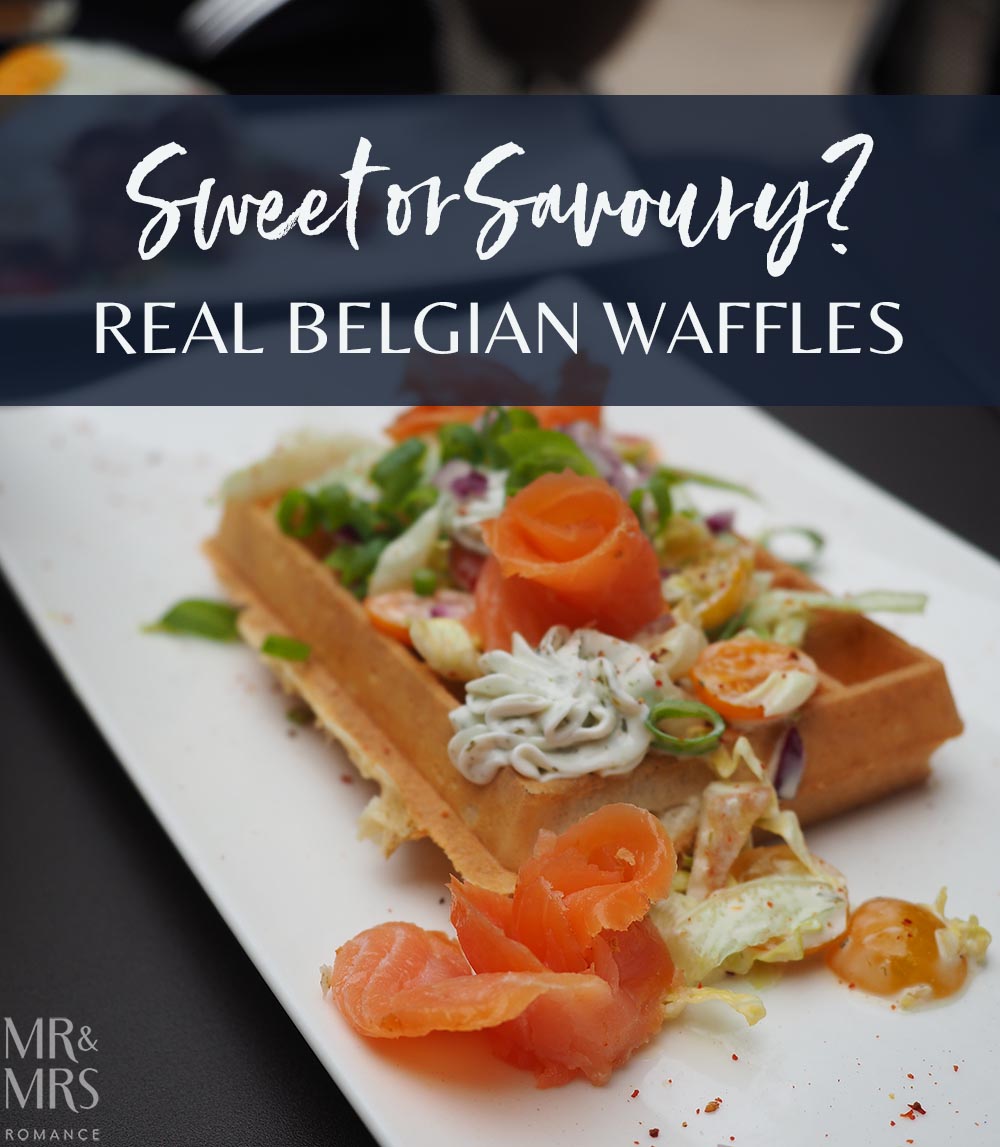 On our recent trip to Bruges in the Flemish part of Belgium, we were expecting great beer, moules frites and sweet, crunchy Belgian waffles covered in melted chocolate and maybe a cheeky scoop of whipped cream.

What we weren’t expecting was to learn that sweet waffles aren’t the only option in Belgium. Not only that, but a savoury waffle is the correct thing to order when you’re in the Flemish part of the country.

Sweet vs savoury – which waffles where

Because we’re so used to thinking of waffles with sweet toppings, the idea of having bacon, egg, smoked salmon or cheese doesn’t seem right. But I tell you what, the breakfast waffles we had at the House of Waffles in Bruges changed our minds about that.

The crispy, fluffy texture of the waffles with their signature ‘deep-pocket’ grids and savoury flavour go perfectly with all the things you’d want in a main meal. There’s even an Italian waffle you can get with mozzarella, olives and pesto.

These savoury waffles are traditional in the Flemish part of Belgium, so they’re known as Brussels waffles.

The sweet ones are from the French part of Belgium, specifically Liege. Therefore, locals call them Liege waffles.

Ironically, you’re more likely to find the Liege style sweet waffles in Brussels, especially down the more touristy spots of the capital. 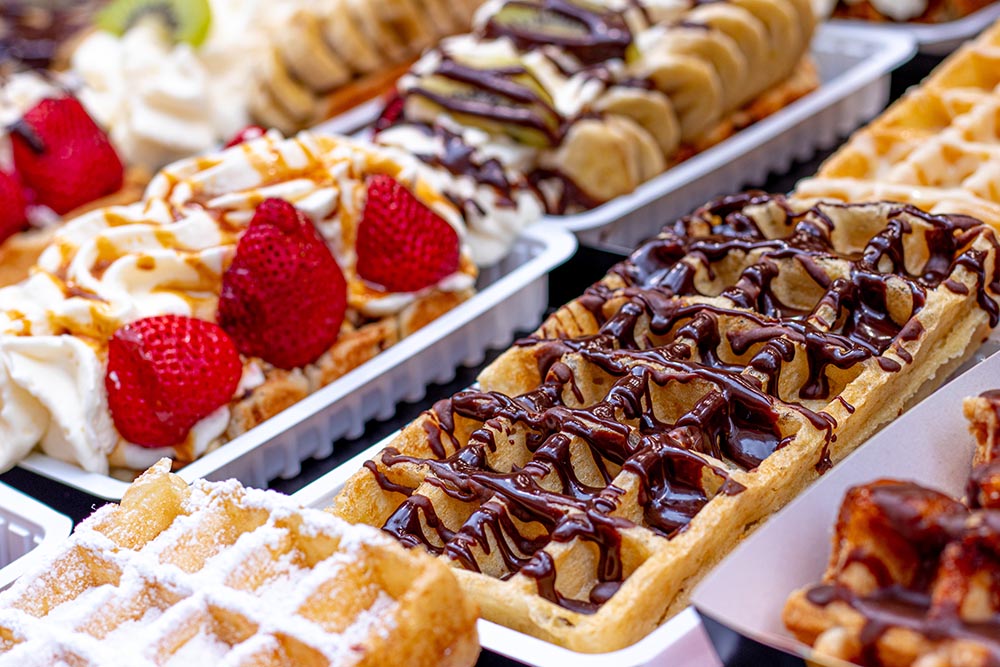 Huge towering columns of whipped cream and lashings of chocolate, strawberry sauce, crushed nuts and a wealth of other touristy toppings load the waffles here.

If you do decide to have a Liege waffle, the best topping is also the simplest: melted Belgian chocolate on a freshly-made sweet waffle is truly delicious.

Check out our story on what to do in 24 hours in Brussels.

However, in Bruges, not far from Brussels and also in the Flemish part of the country, you’re more likely to find both the savoury ‘Brussels waffle’ and the sweet Liege ones.

The waffles in Belgium, whether they’re sweet or savoury, are much thicker than regular shop-bought or American style waffles. This because the waffle irons they use in Belgium are thicker with deeper pockets.

They’re also much lighter and fluffier because the Belgians use a yeasted waffle batter or baking soda, which makes the waffles rise as they cook.

A brief history – I’ll try not to waffle! 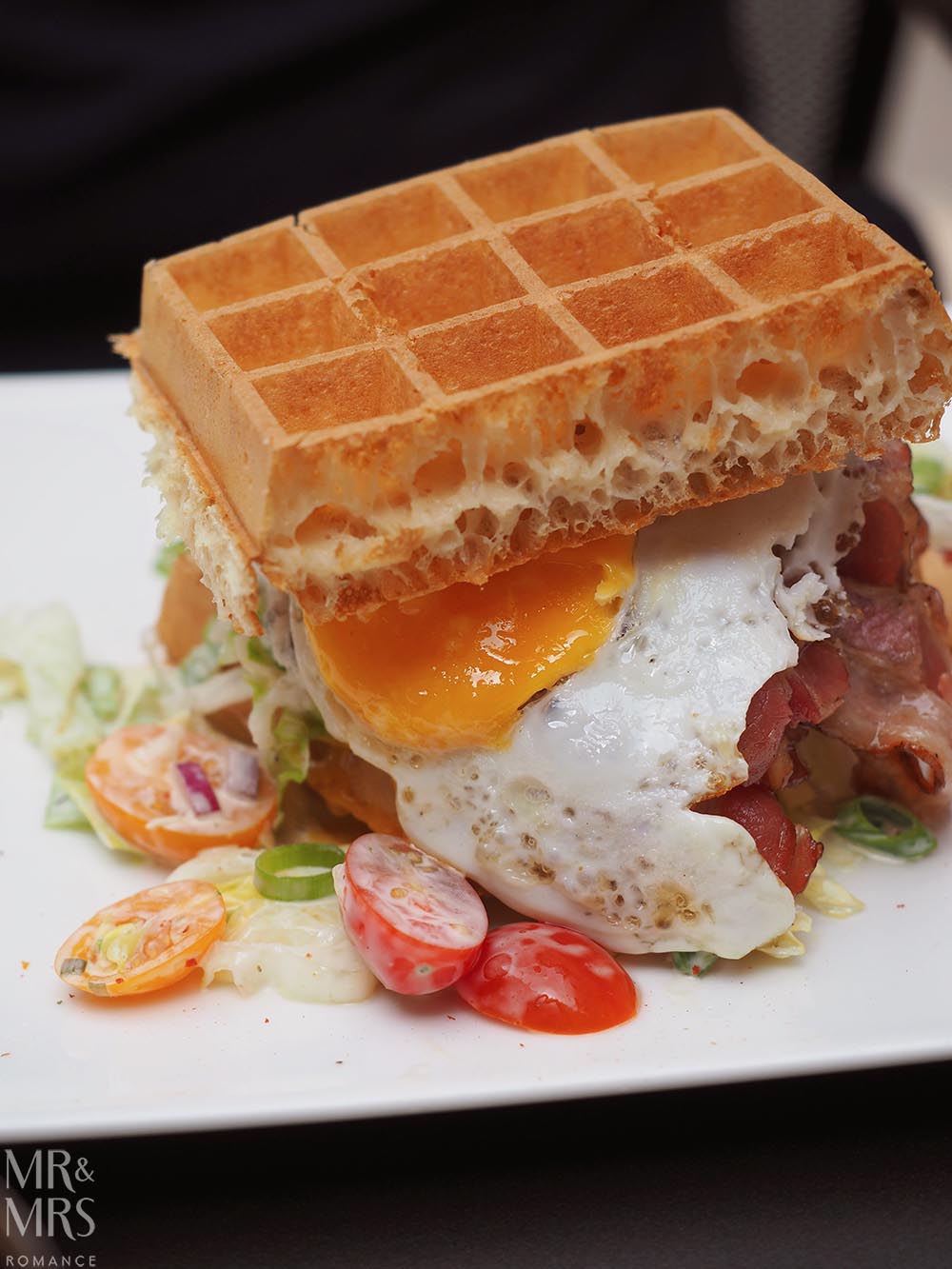 Waffles go back a surprisingly long way. All the way to Ancient Greek times in fact, where a kind of ‘proto-waffle’ called obelios was roasted between two metal plates attached to a long wooden handle.

In Medieval Europe, the Catholic Church took a slightly evolved version of obelios under its wing and from there, these thick, unleavened wafers became ‘wafels’ and so you see where the name came from too.

In the 15th Century, Dutch bakers started making square waffle plates (instead of the old-fashioned round ones) and added grid patterns too. From there, it’s easy to imagine how the Flanders part of Belgium took up the waffle reigns from Holland and turned what was once a flat, dry wafer into the fluffy, grid-marked delights we enjoy today.

But there’s an element of confusion thanks to the 1964 World’s Fair in New York. In the Belgian Village at the fair, Maurice Vermersch and his family set up a stall selling ‘Brussels Waffles’, covered in cream and strawberries.

Compared to the poor imitation of waffles Americans had grown used to, these Brussels waffles were incredibly popular. With the likes of Eggo frozen waffles infiltrating homes since the 1930s (even now 40% of American homes have Eggo waffles in their freezer), Brussels waffles must have blown everyone’s mind.

However, locals weren’t sure what ‘Brussels’ was. Instead, Vermersch changed the name to ‘Belgian waffles’, adding another nail in the traditional savoury waffle’s coffin.

For a more comprehensive history on waffles, check this story out from Mental Floss.

Where did sweet waffles come from? 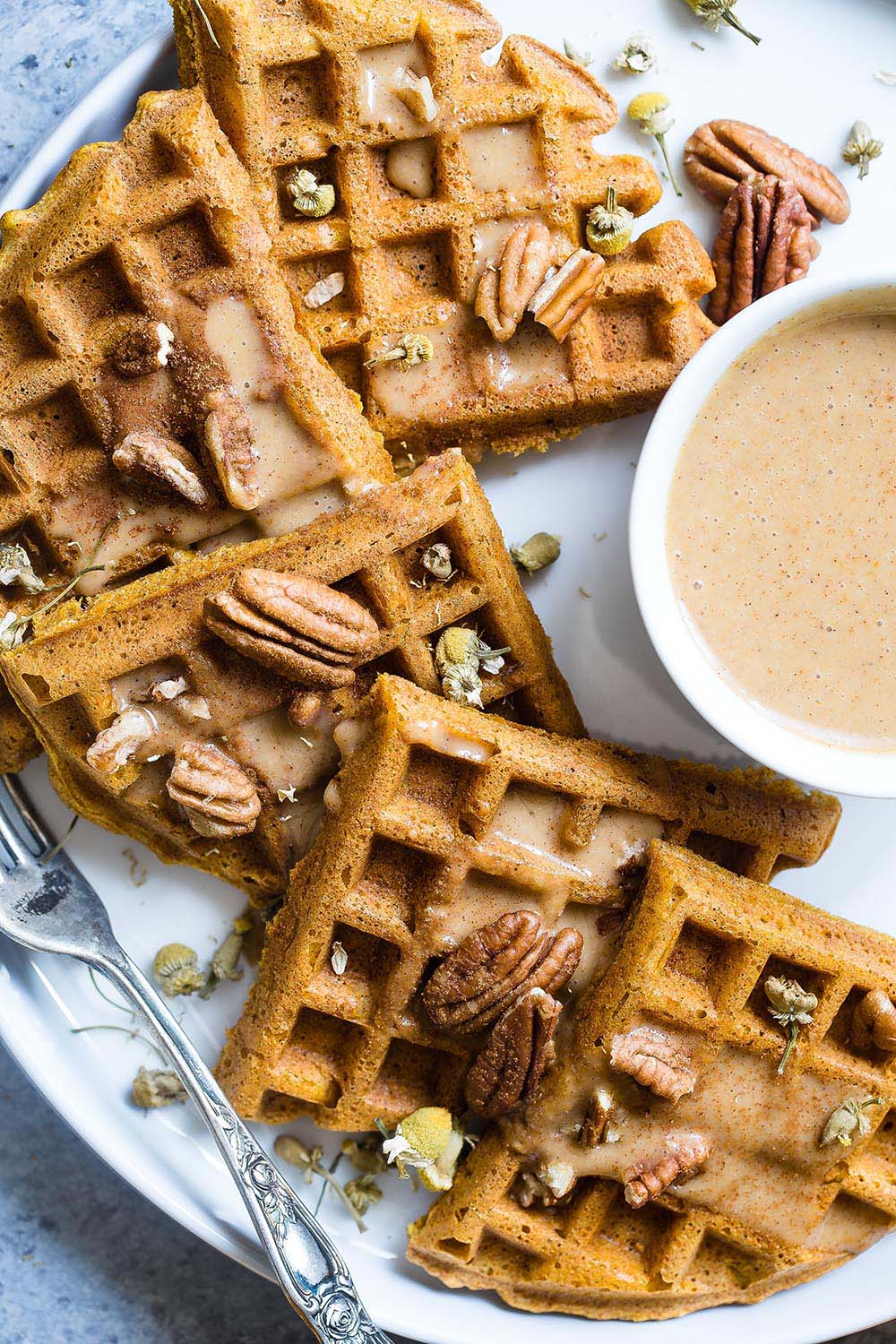 As I mentioned earlier, Brussels waffles – from the Flemish part of Belgium – are traditionally savoury. It’s the French-speaking part of Belgium that’s always had the sweet version, which are known in Belgium as ‘Liege waffles’.

Since the Prince-Bishop of Liege and Maurice Vermersch at the World’s Fair, sweet waffles have taken over, tickling the sweet tooth of our modern palate.

Perhaps one day, the savoury waffle will make a comeback. And now I know it’s a thing, I’m looking forward to that day. 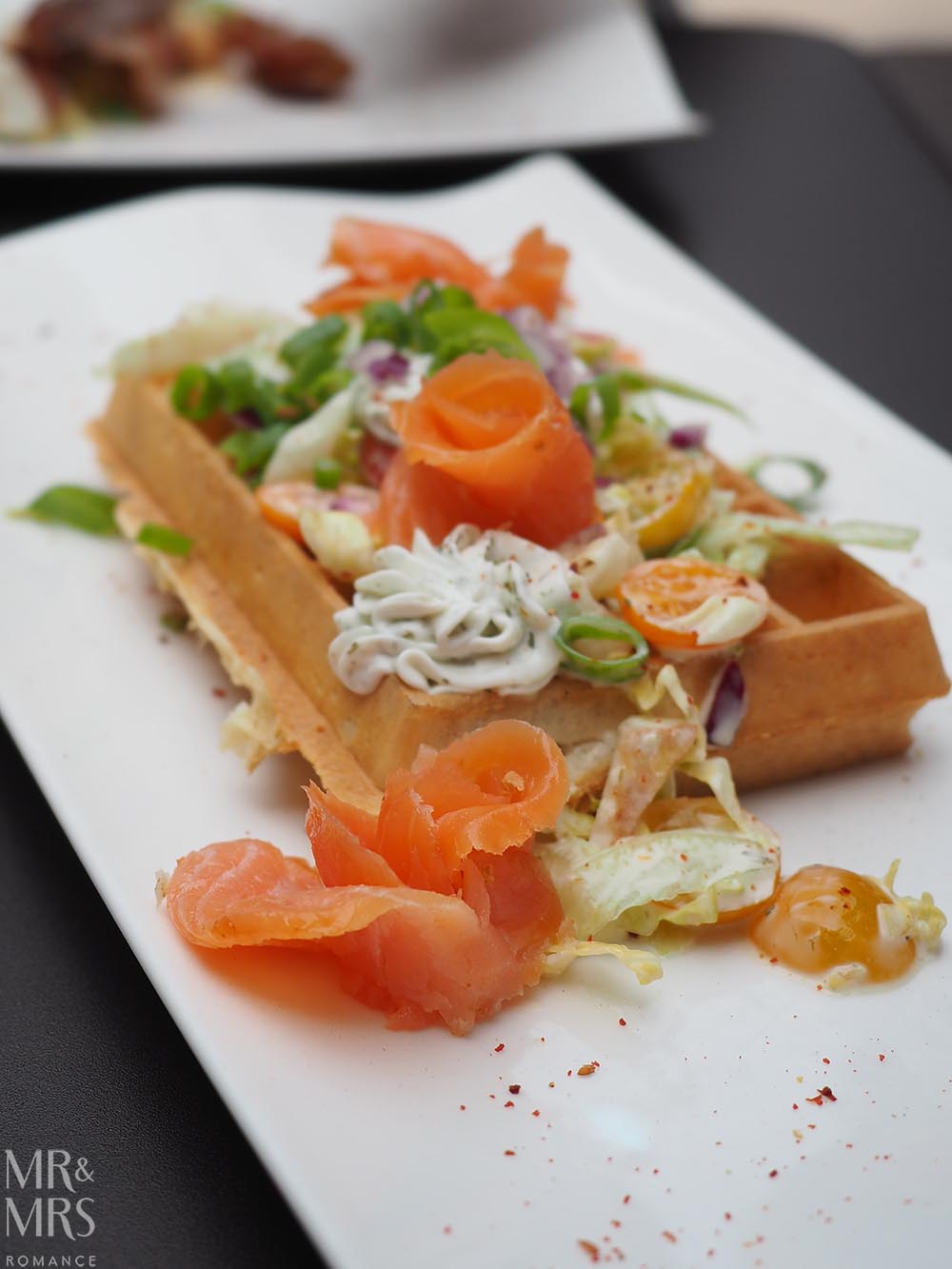 Have you ever had savoury Brussels waffles? What’s your favourite waffle topping? Tell us in the comments.

We’re still waiting for that bump of reality since coming back home to Australia. It’s been nice not having to get straight back into…