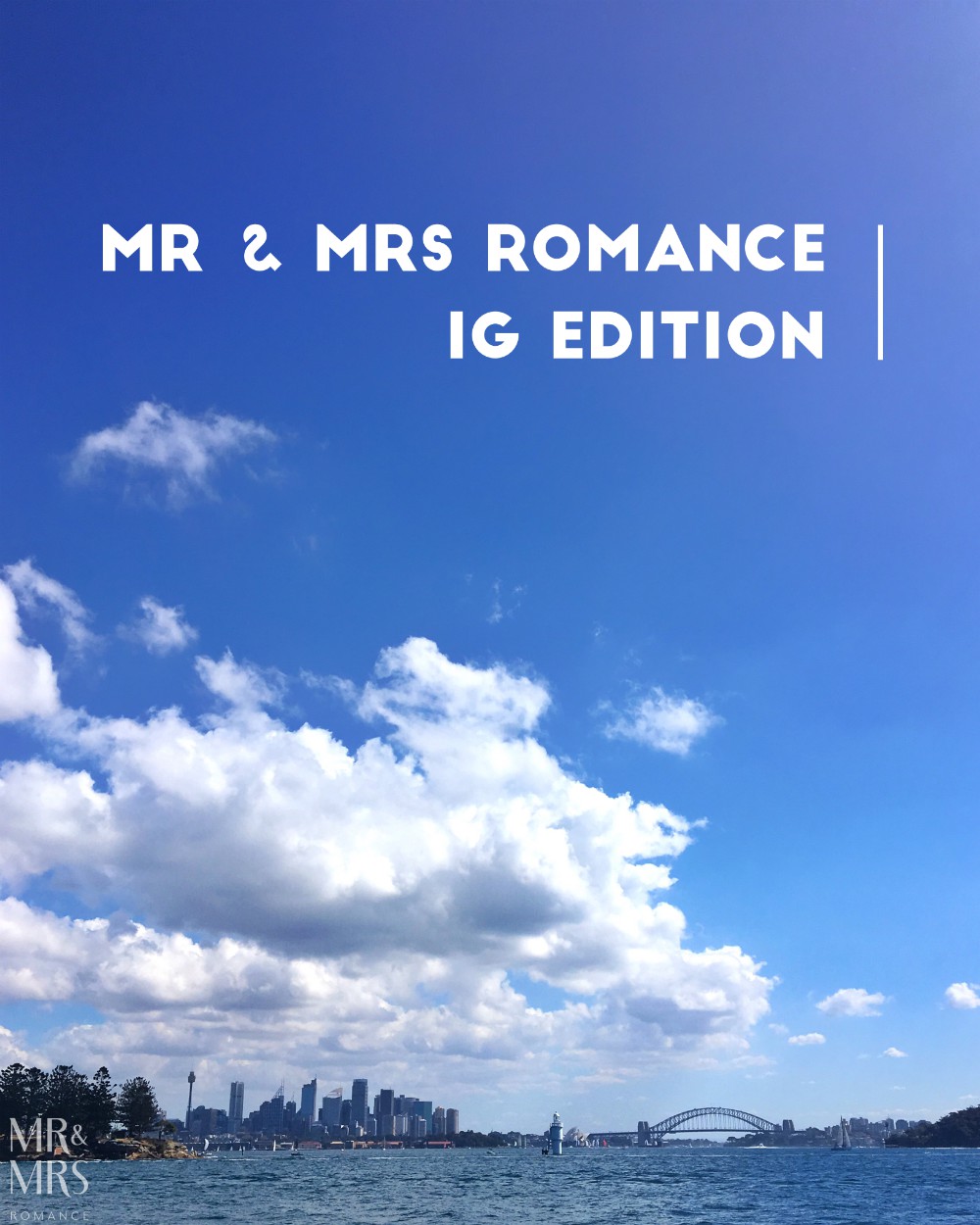 If you’ve been reading us for a while and you get our weekly emails I send out, you’ll probably already know it was our anniversary recently. We tend to go a little bit crazy around this time of year – maybe because this is around the time we first met, which was a pretty crazy time in itself.

Here’s our story of how we met by the way.

For that reason – and perhaps because we love the hospitality scene anyway – the week after the 15th September (the date we met) always tends to have a bit of a booze focus.

That said, we’ve also been so busy recently, fitting life around our cocktails has been a little tricky this week. Especially with Mrs Romance being one of the experts of Priceline’s Beauty School and having her first public appearance for them, it’s been hard to find enough time to celebrate… don’t worry though, we did find a way.

We hope you enjoy this (rather boozy) IG Edition and we’ll chat again soon. 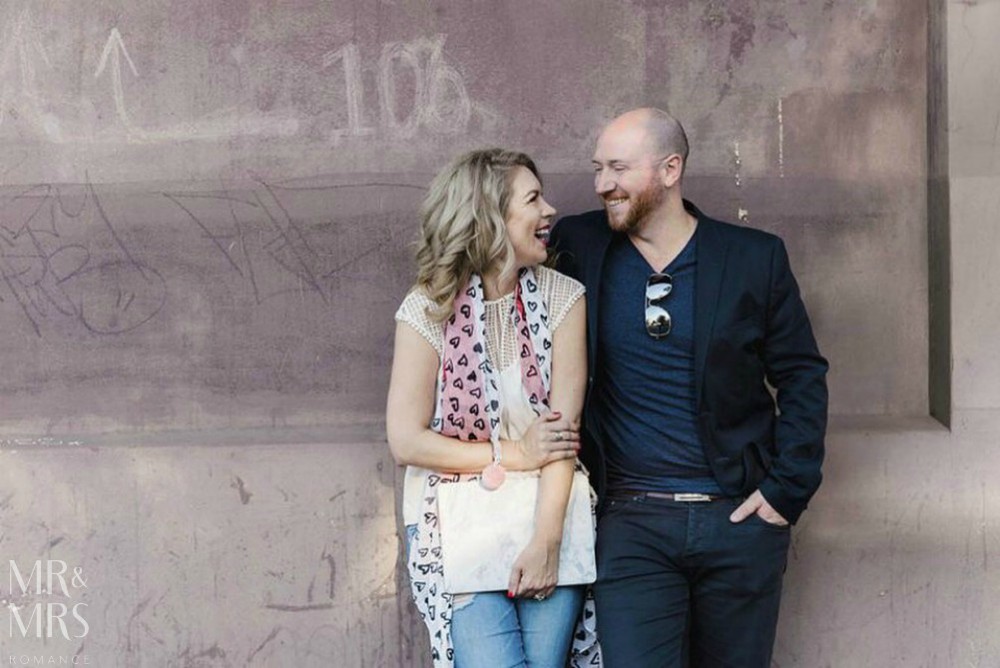 So this week, we’re celebrating our 17th year together! Isn’t that amazing? We were so young when we first met – when the opening ceremony of the Sydney Olympics was on!

And because we didn’t know how long we’d had together – Mrs Romance enjoyed labelling me ‘an itinerant’ because I was a backpacker at the time – we celebrated being together at every opportunity.

But this long on, I think we can safely put to bed any suggestions that this is a short-term relationship! Here’s to the next 17 years with the most amazing woman on earth.

Hope you like our photo by the way. It’s the beautiful work of Kris Ashpole. Check out her portfolio. 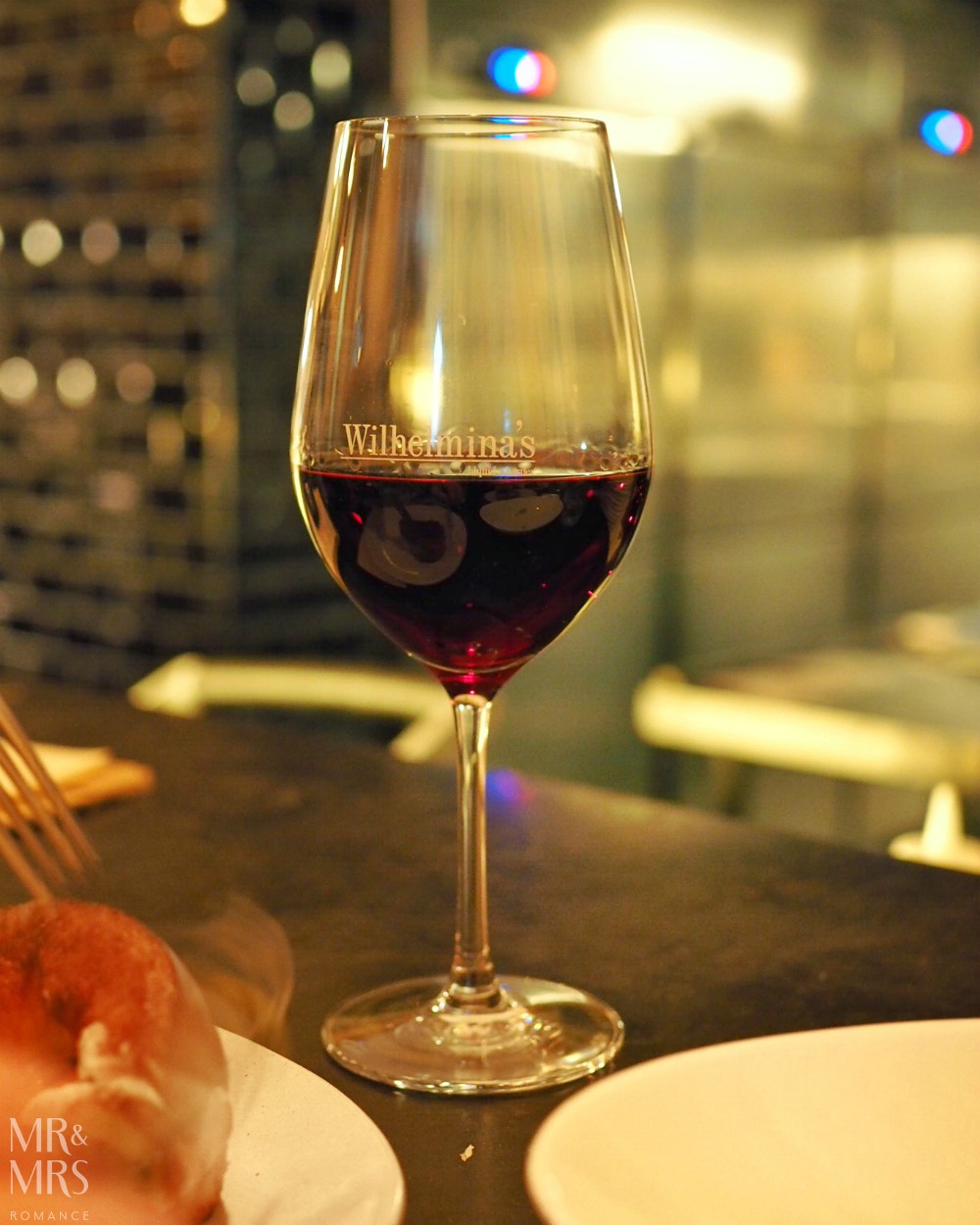 To celebrate, we’ve come to Wilhelmina’s in Balmain. This awesome bar (which is sister to another favourite of ours – the Wild Rover) hosts regular events that are always worth going to.But tonight’s event is the absolute pinnacle: whisky and chocolate pairings!

First, however, we’re being sensible and lining our stomachs… with wine!

The set menus they have prior to their events at Wilhelmina’s are very smart. You choose 2 entrées and a main to share per couple – and a glass of wine of course. We’ve gone for the polenta nuggets with chilli jam and paramasan, and the pork-stuffed Yorkshire puddings with goat cheese to start (we’ve chosen wisely), and we’re sat up at the bar.

If you’re ever offered a bar seat at a restaurant instead of a regular table, always take it. You get to see what happens and you often get even better service. It’s a favourite tip of ours. 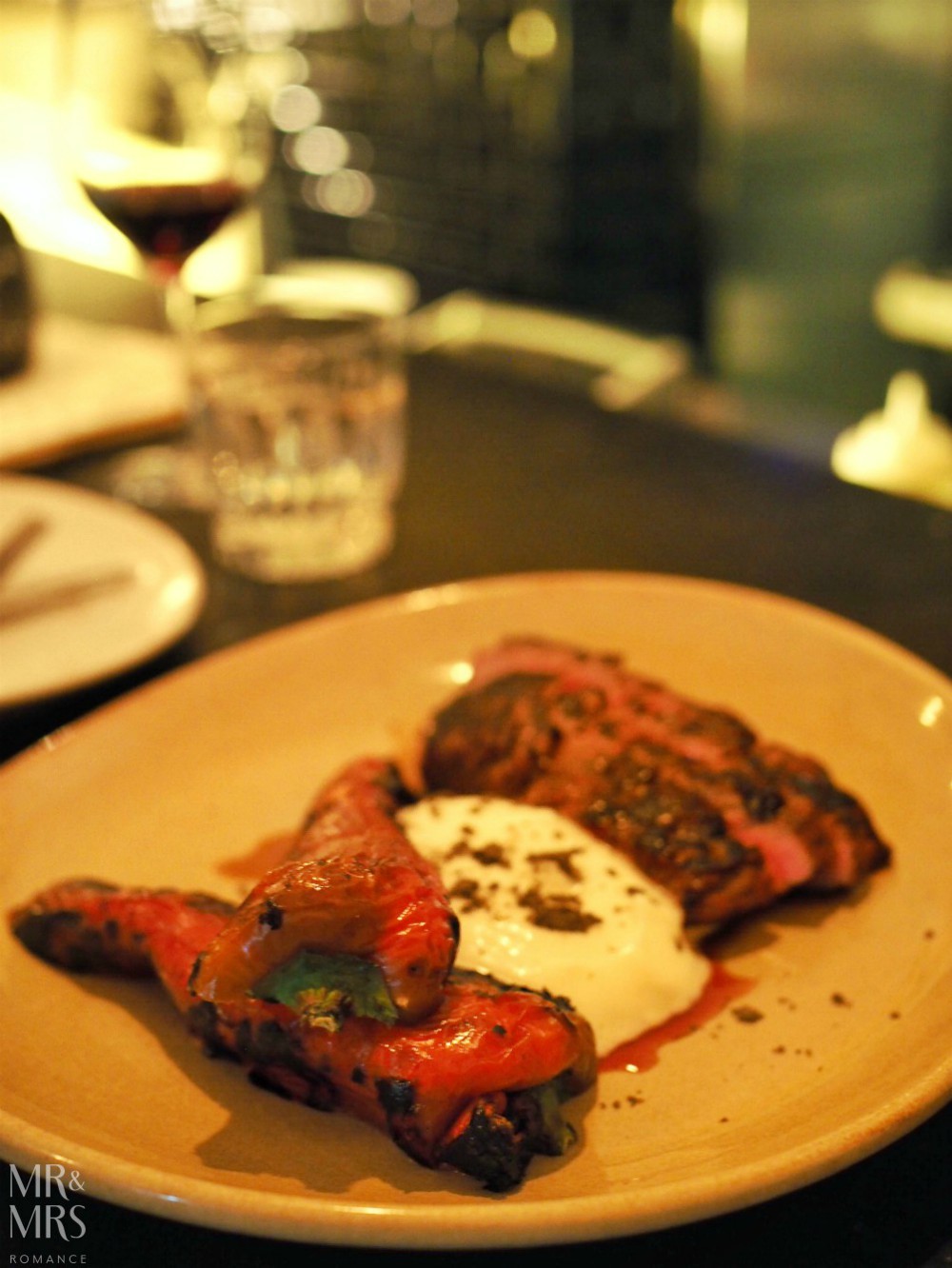 The main is a char-grilled flank steak with charred bullhorn peppers and a buttermilk and horseradish puree. Now I’m really ready for whisky and dessert! 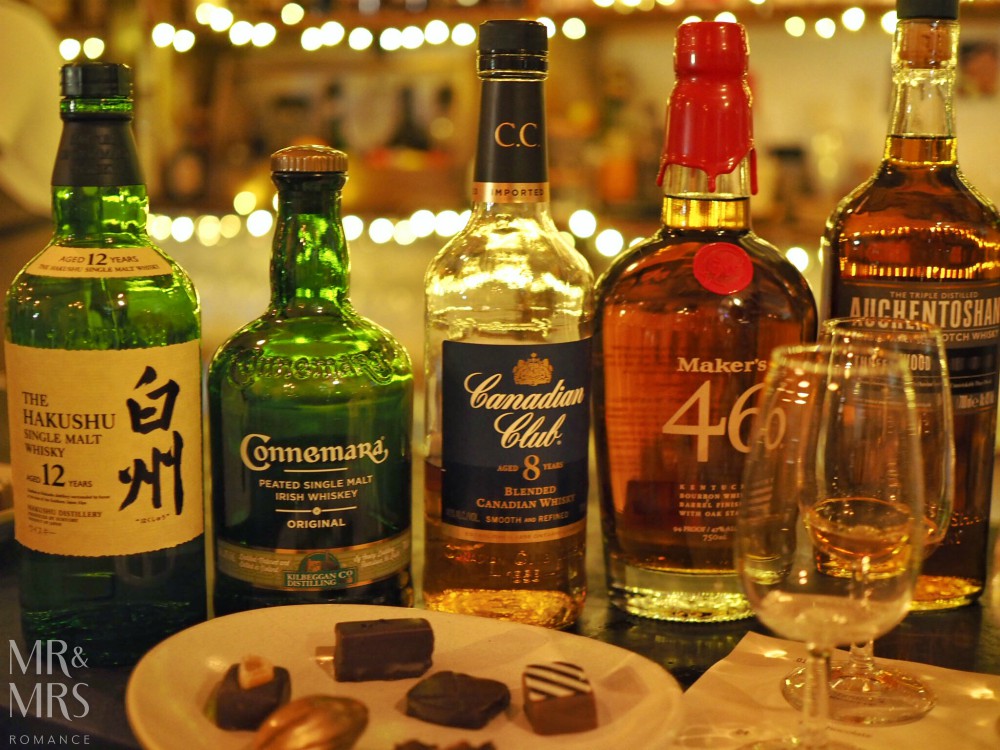 Here are 5 of the 6 whiskies we’ll be sampling and learning about tonight – the only one missing is the Laphroaig Quarter Cask. And below them the beautiful chocolates that have been so carefully paired with each dram.

Taking us through each whisky is the hugely knowledgeable Michael Nouri – a booze brand ambassador and –to look at – quite possibly the Jesus of whisky. 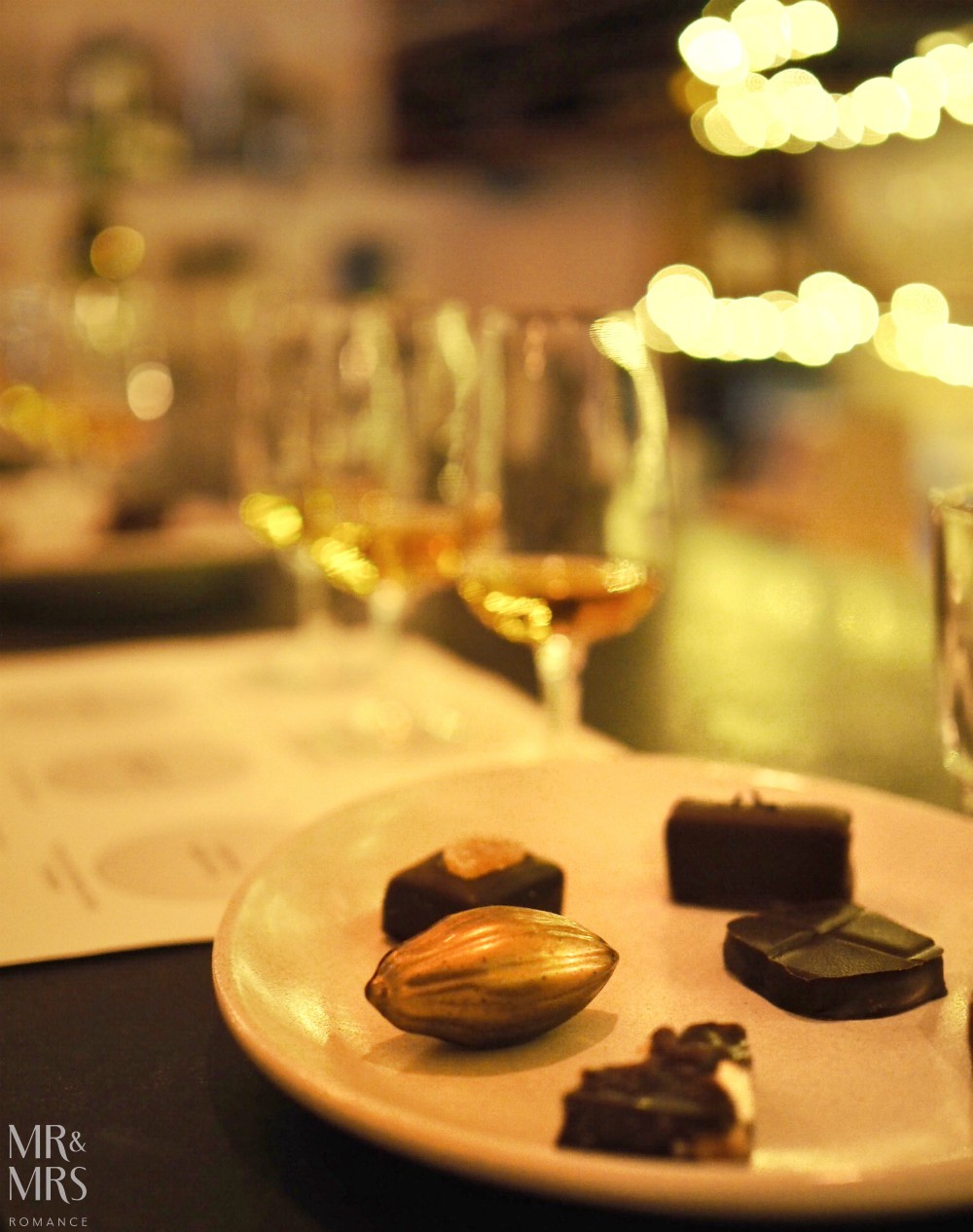 The chocolates, by the way, are from a local Belgian chocolatiers Belle Fleur Fine Chocolates in Balmain. They’re so delicious it’s all I can do to keep my hands off them before the class begins! 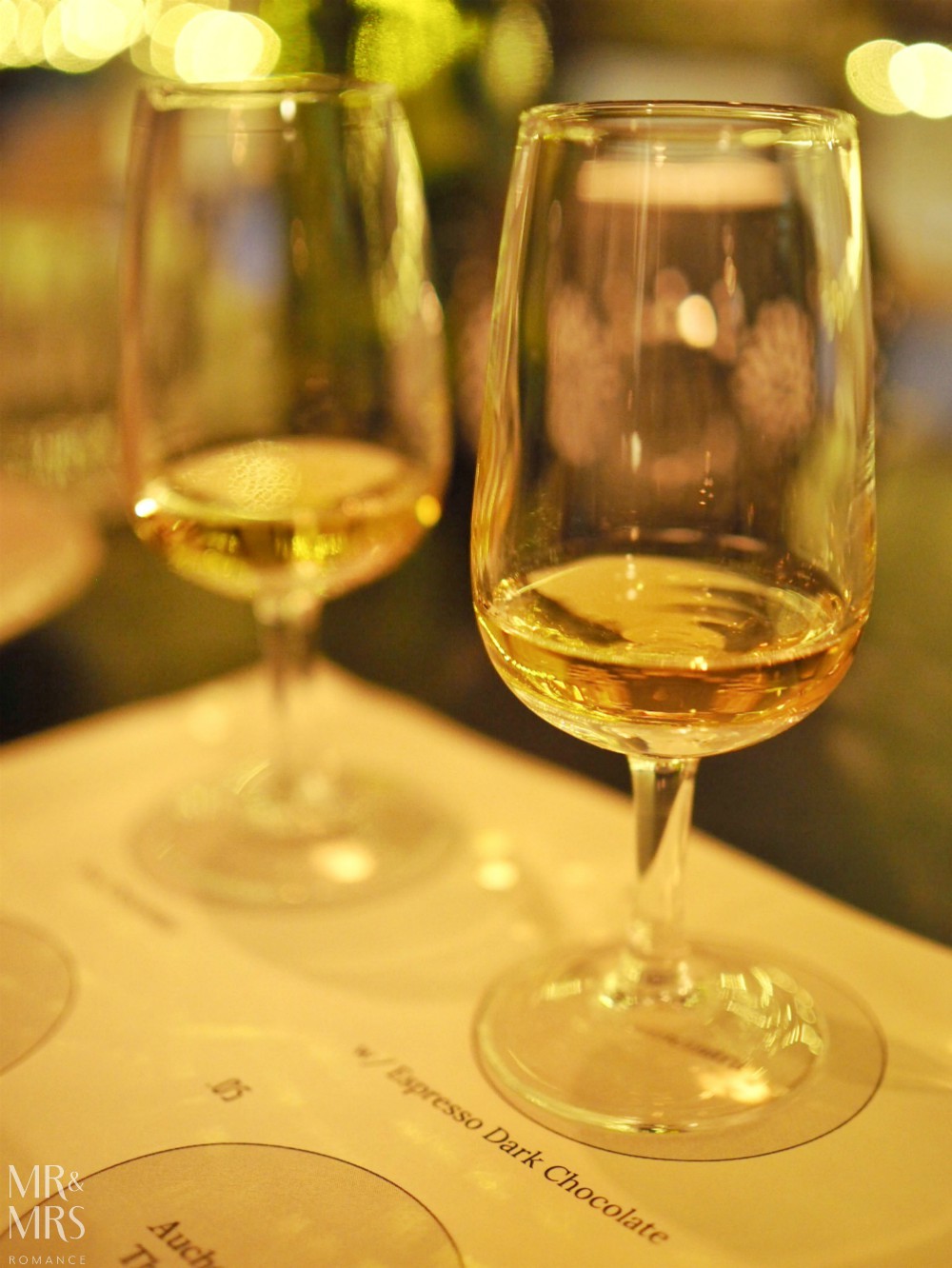 We start with the Japanese Hakushu Distiller’s Reserve paired with a tea chocolate, the Connemara Irish whiskey with an espresso dark choc and the Canadian Club 8 year-old whisky, which works well with a wattle seed chocolate. I’ve never tried Connemara before, which is a shame. It’s now a solid favourite.

The second round starts with the Makers Mark 46 bourbon and its Riverina orange chocolate. It’s a very special whiskey and one I really enjoy. The Auchentoshan Three Wood Scotch single malt is excellent but is still a bit clean for me. The PNG dark chocolate, which is the gold cacao shaped choc you can see, is so full on. About 1000% cacoa!

Finally, the Laphroaig Quarter Cask finishes the playlist with a bombshell, and a popcorn and peanut dark chocolate. This has the smoky, peaty oomph I love about Islay scotch.

Unfortunately, Mrs Romance hasn’t had such a great night; she’s not a whisky fan. It was her idea to book this evening though. Isn’t she a lovely human? 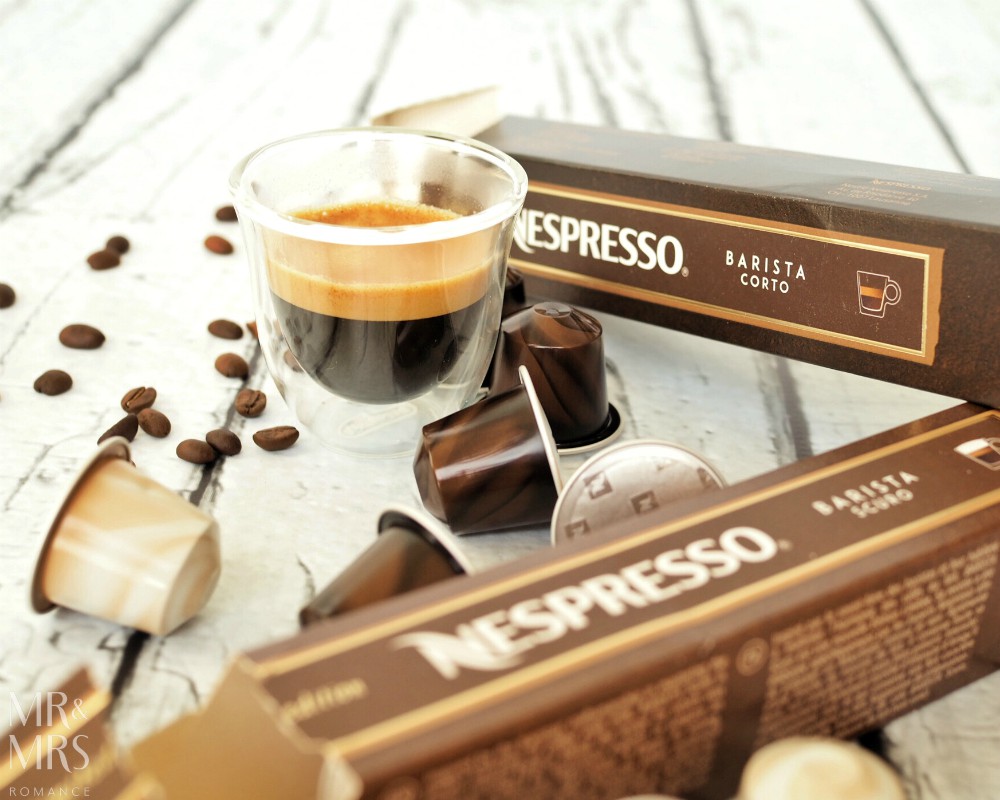 Mrs Romance and I are pretty big fans of coffee. I can’t go a day without one. It means I lean pretty heavily on our Nespresso machine, the poor thing.

For other Nespresso folk out there, I’m a fan of the purple capsules – the Arpeggio – and I’m often a little sceptical when Nespresso bring out a new limited edition range.

My scepticism was ill founded with their latest range though. These three make up the Barista Range, and they’re actually bloody awesome. The only downside is that they’re limited editions, which means they’ll eventually disappear. 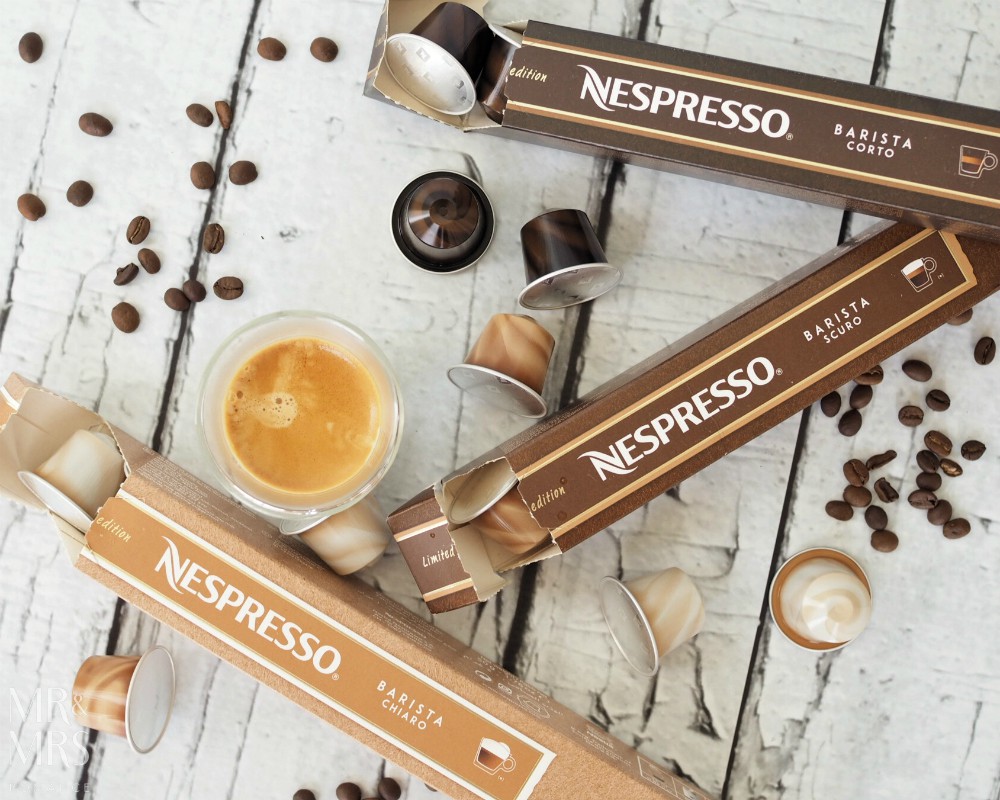 There are three different intensities and flavours in this range, and they’re all quite Italian in name and in profile: the Chiara – meaning ‘clear’, the Scuro, which translates as ‘dark’, and the Corto, Italian for ‘short’.

I love that these three work better in different styles of coffee. For example, the Chiara is great as a flat white or cappuccino and the Corto is amazing as an espresso or macchiato. They’re interchangeable of course, but I think that’s how they should be enjoyed.

The crema on the coffee you can see by the way is just from the coffee. No milk added. 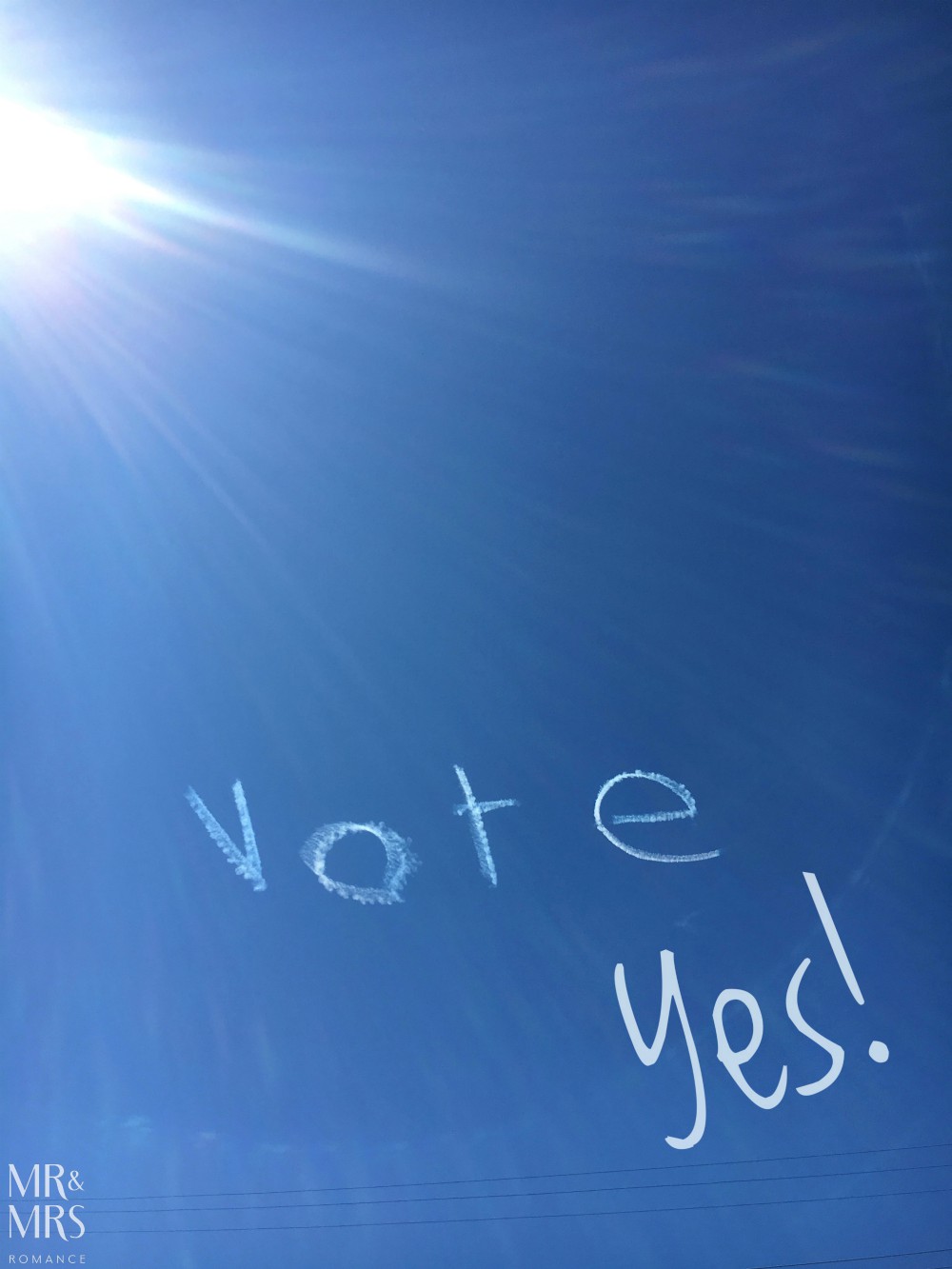 The ballot papers are starting to appear in people’s letterboxes now, and Mrs Romance and I are starting to feel a bit nervous. I hope there’s nothing in it, but the skywriting over Sydney doesn’t make us feel very good. I’ve taken the opportunity in post-production editing of this photo to change the message to what I want it to say of course.

A really close friend of mine told me recently that he’s voting no for marriage equality, which just brings up yet another problem with this stupid plebiscite. It unnecessarily makes people – friends – butt heads over issues that don’t need to be brought up. If this government – unlike so many others around the world – had had the courage to make such a simple change that affects absolutely no one else other than the people wanting to get married, so much money, time and friendships would have been spared.

It was such a pretty sky before this happened, too. 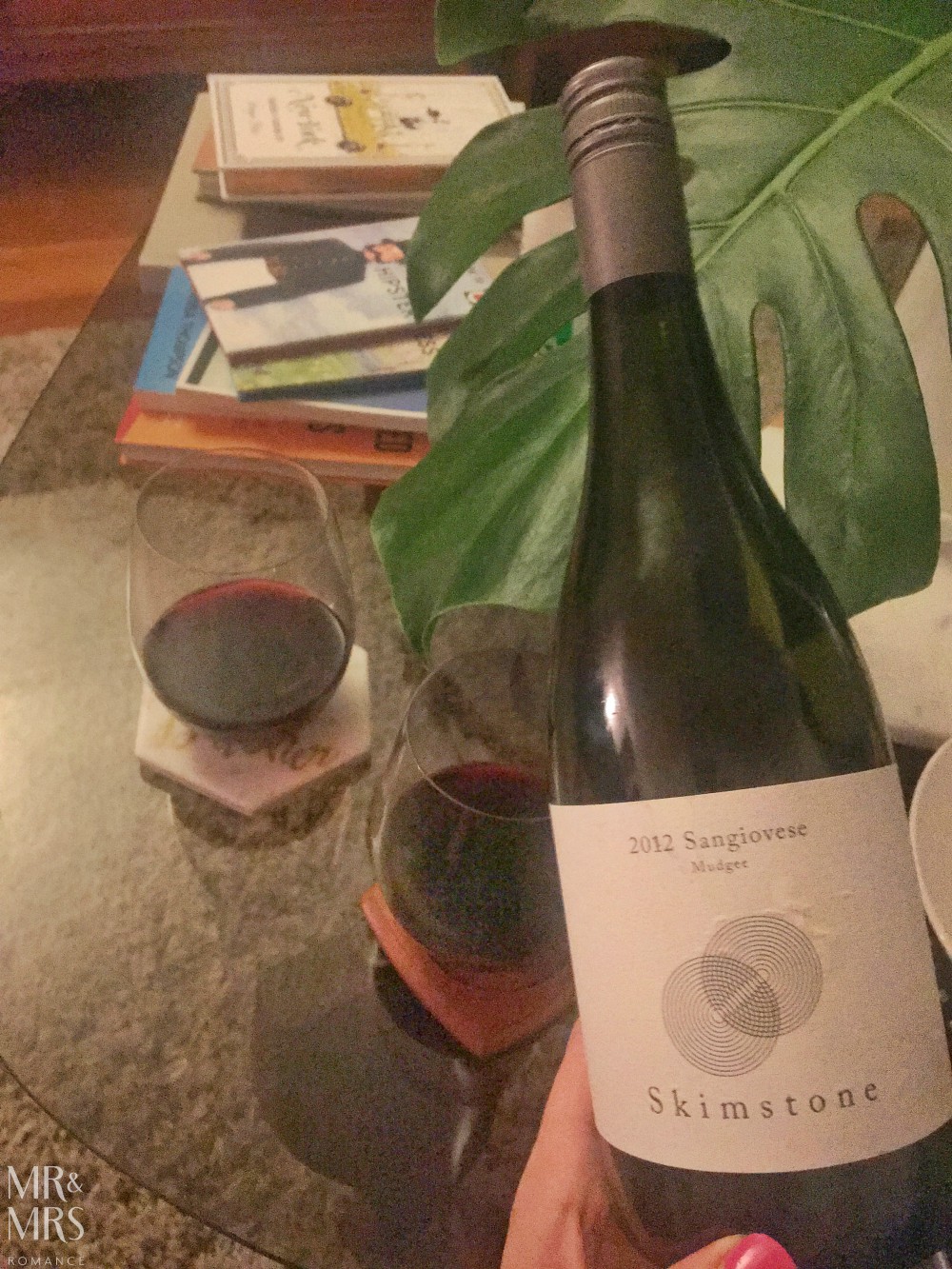 Tonight, continuing our celebrations of our anniversary, Mrs Romance and I have cracked one of those special bottles of wine we’ve been saving for a long time.

Skimstone Winery in Mudgee, NSW is an amazing little place. Stunning surroundings and incredible wine, and all sold from a cellar door they built themselves.

The guys from Skimstone contacted me after we shared this photo on Instagram and told us the 2012 vintage of their Sangiovese no longer exists, which has made us very sad, but it also means we’ve now got a good excuse to get back to Mudgee and enjoy some time in what we believe is the world’s friendliest place.

Check out our stories from our time in Mudgee here. 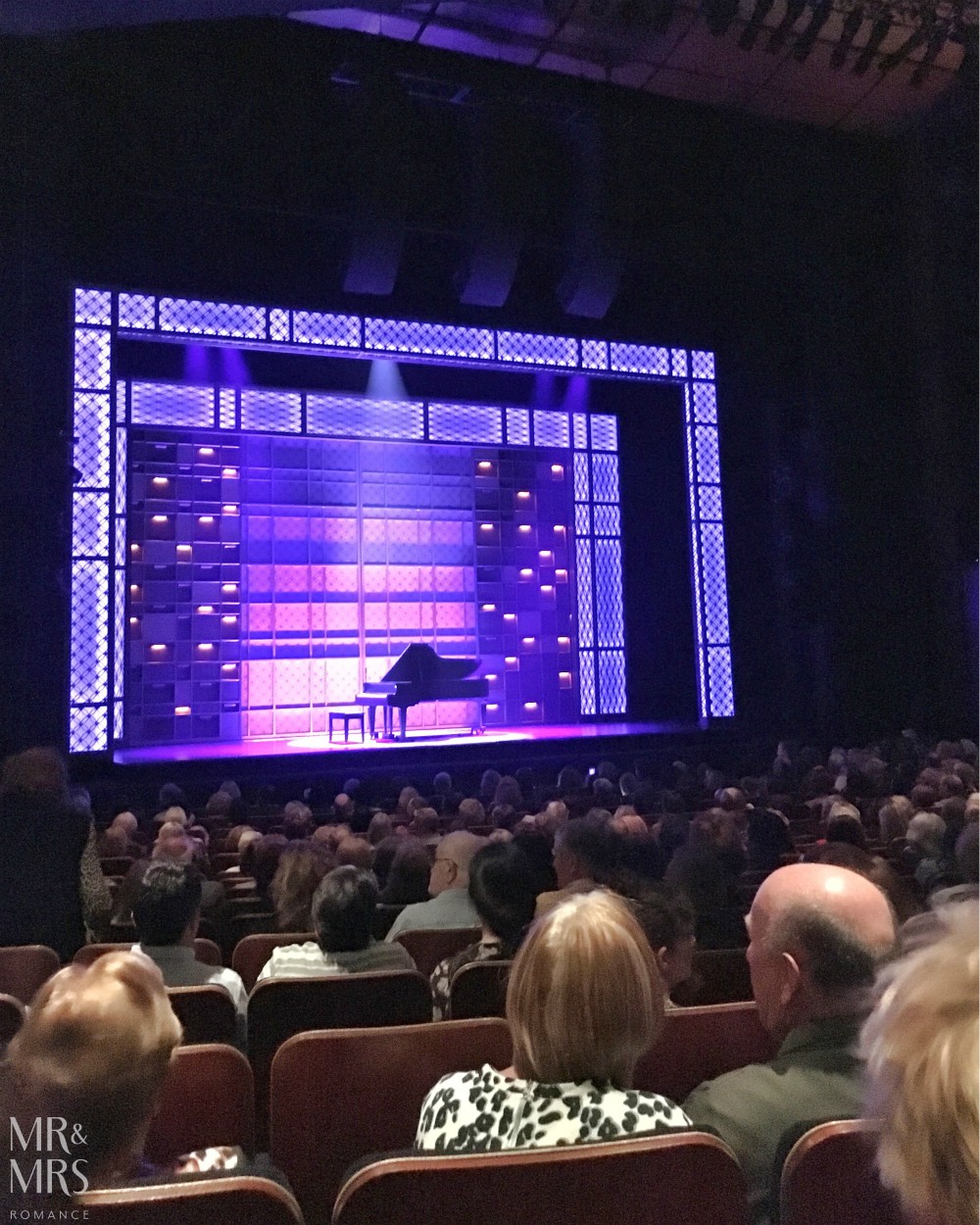 Tonight, Mrs Romance is taking her mum out for a show. They’re going to see the musical Beautiful about the life and times of prolific singer-song-writer Carole King. Here’s what Mrs R has to say about it:

”Carole King one of the most successful female artists of all time. Her album ‘Tapestry’ was in the charts for 6 years and her record was only beaten by Madonna in the ‘90s.

“You may not initially know her name, but her songs have been covered by over 1000 artists including Adele, Amy Winehouse, Kylie and more.

”The musical follows her life story from age 16 to 29 and is really the story of popular music. I was amazed at the range of songs she wrote and that I knew almost every one.

”Best of all, I had a fantastic night out with my mum who adored the show too. We had Gelato Messina after and couldn’t stop talking about the show.

”Definitely recommend this show for music fans of all ages.”

The show runs until 23rd December 2017 at the Lyric Theatre in Pyrmont, Sydney. Don’t miss it! 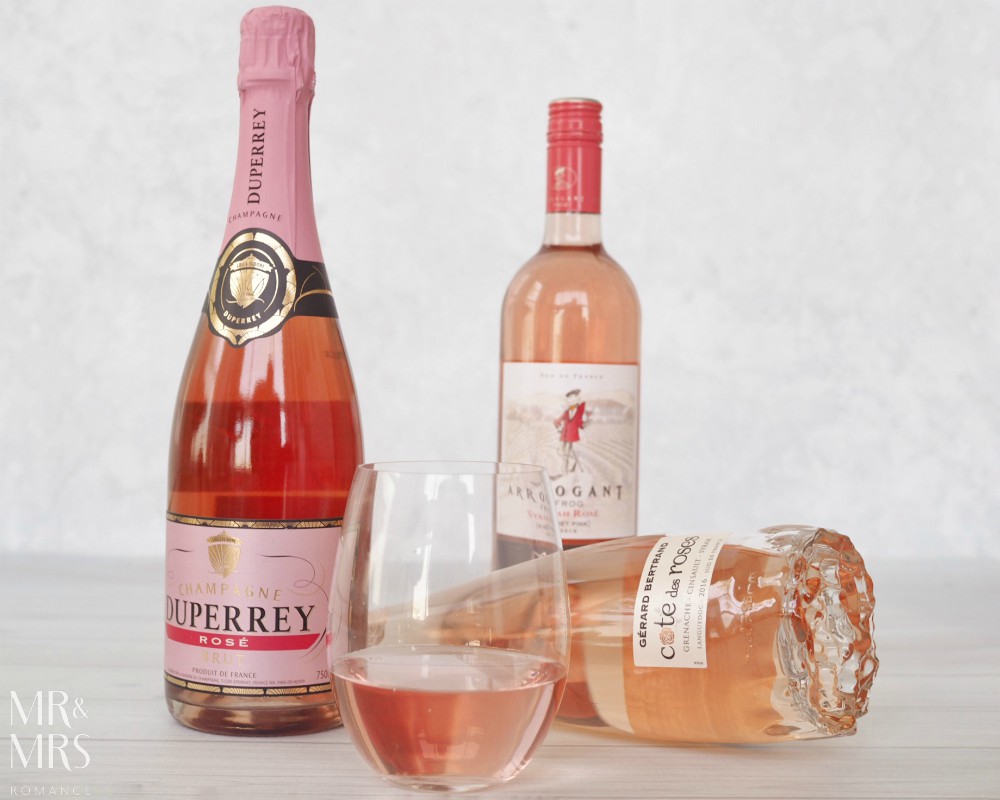 After a hot weekend here in Sydney, it really feels like we’re coming into summer proper. As you can see, we’re all set and ready for it too!

There’s nothing better than a glass or two of rosé on a hot day. Ever since we visited Provence in France a couple of summers back, the home of crisp, dry, pink wine that even the manliest of men drink, we’ve been hooked.

We’ll have a few more tips for summer rosés as the temperature picks up, but these are our top picks for the time being:

The Arrogant Frog Ribet pink Syrah Rosé punches above its weight in price terms, has an awesome name and label and is from the region adjacent to Provence. Well worth a go for $9.99

The Gerard Bertrand Côtes des Roses Rosé comes in one of the most distinctive bottles we’ve ever seen. That’s right: the bottom is in the shape of a rose! This Provençal princess is sweet yet tempered with a citrusy pop, and on the money at $19.99.

Finally, if you want to celebrate the summer in style, here’s what you want: the Champagne Duperrey Brut Rosé. It’s crisp and fresh but is also honeyed and fruity, and is perfect at giving that French accent to a happy day. RRP $46.99. 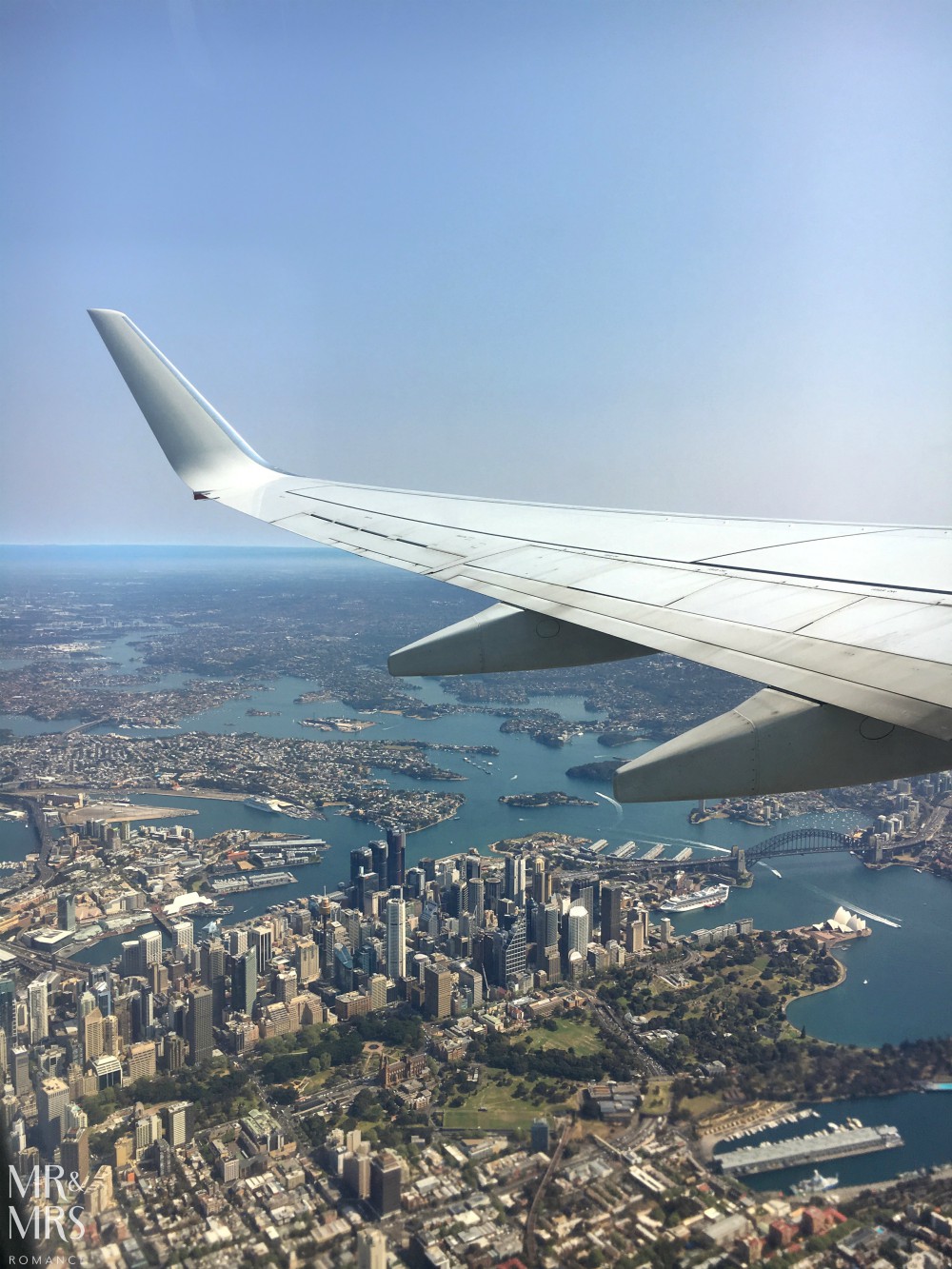 Mrs Romance – in her Hair Romance capacity – is off to Queensland this morning to work the crowd at the latest Priceline Pharmacy Beauty School Playground in Pacific Fair in the Gold Coast. Not a bad view of Sydney from up here! 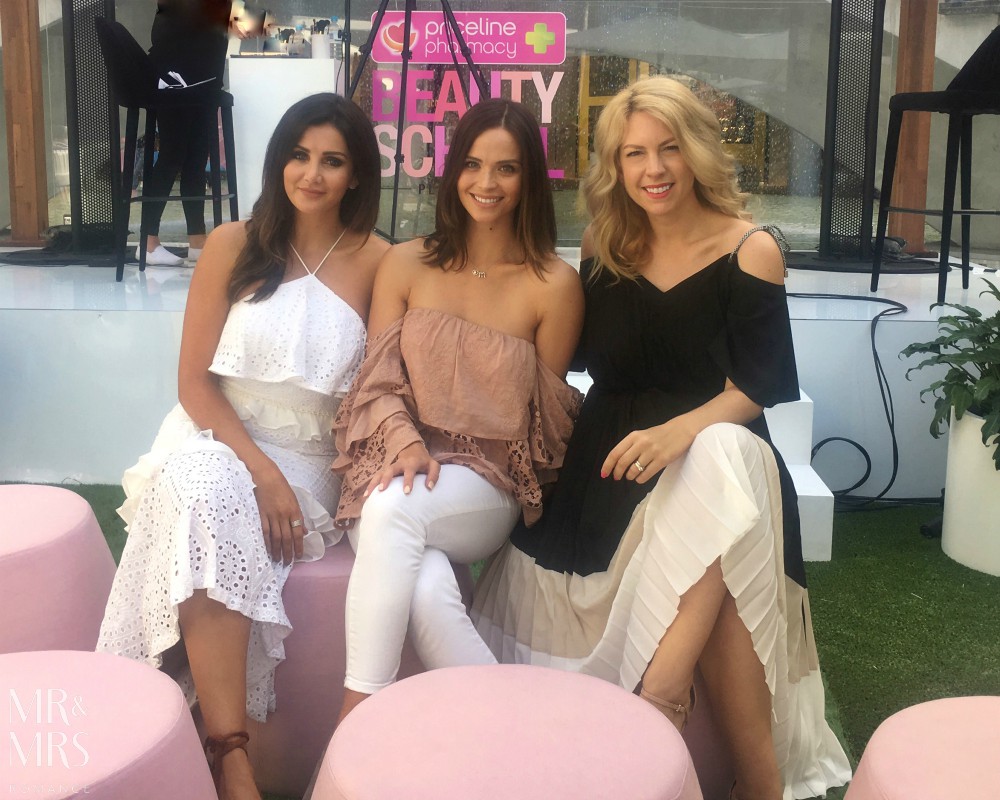 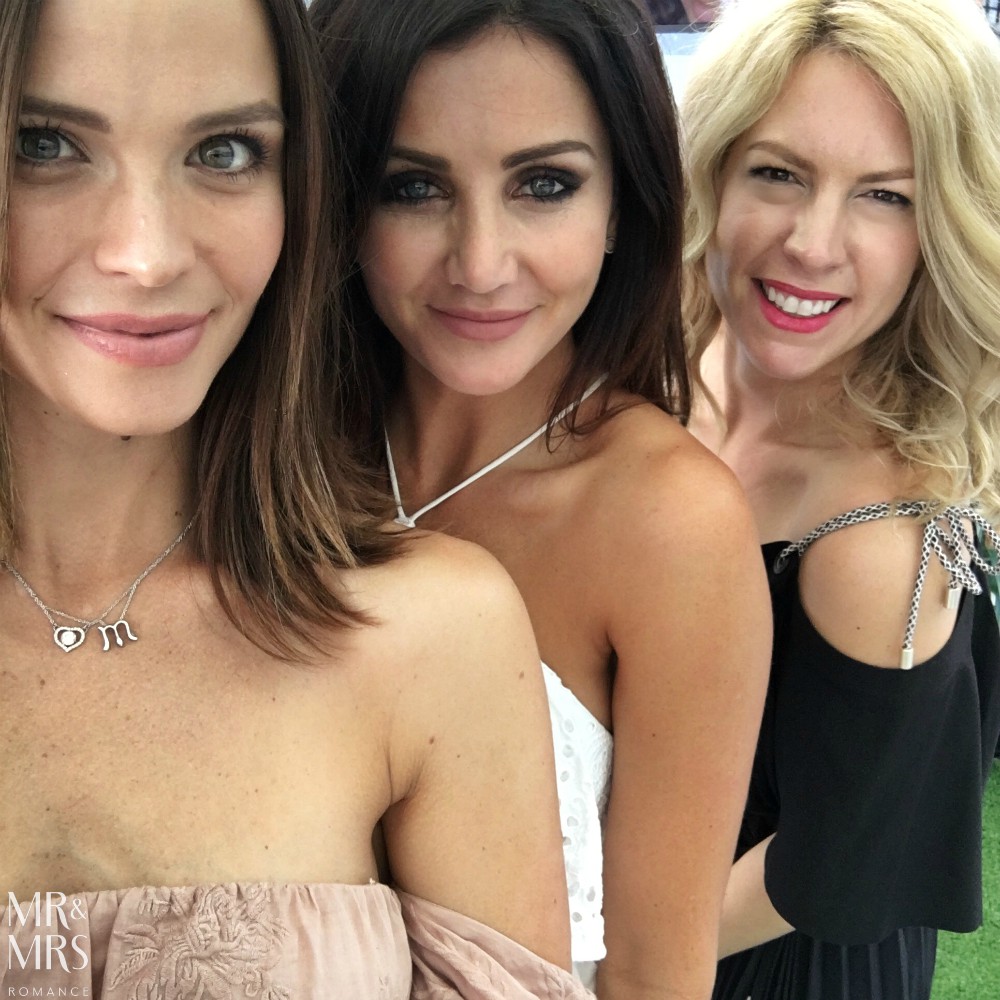 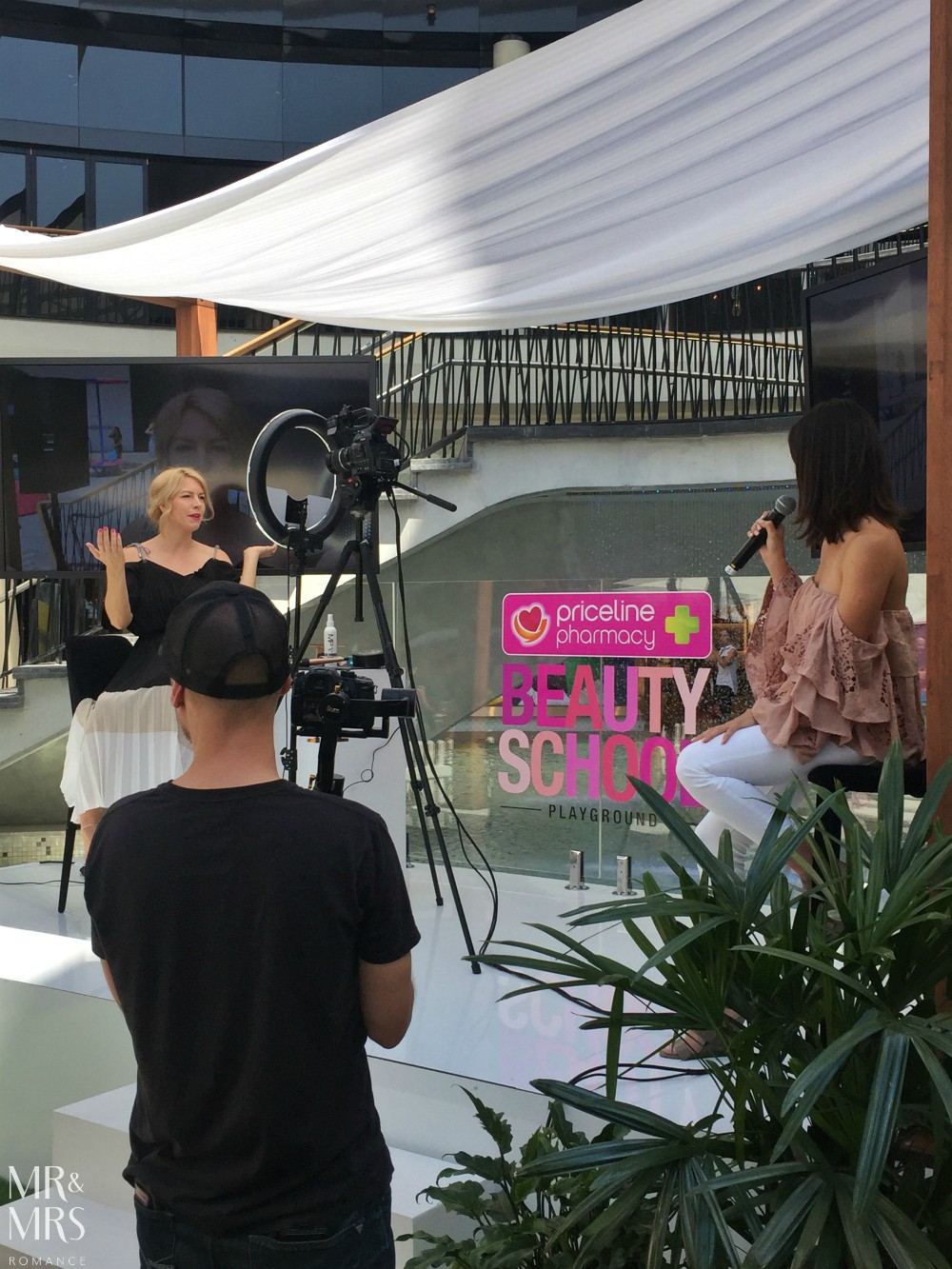 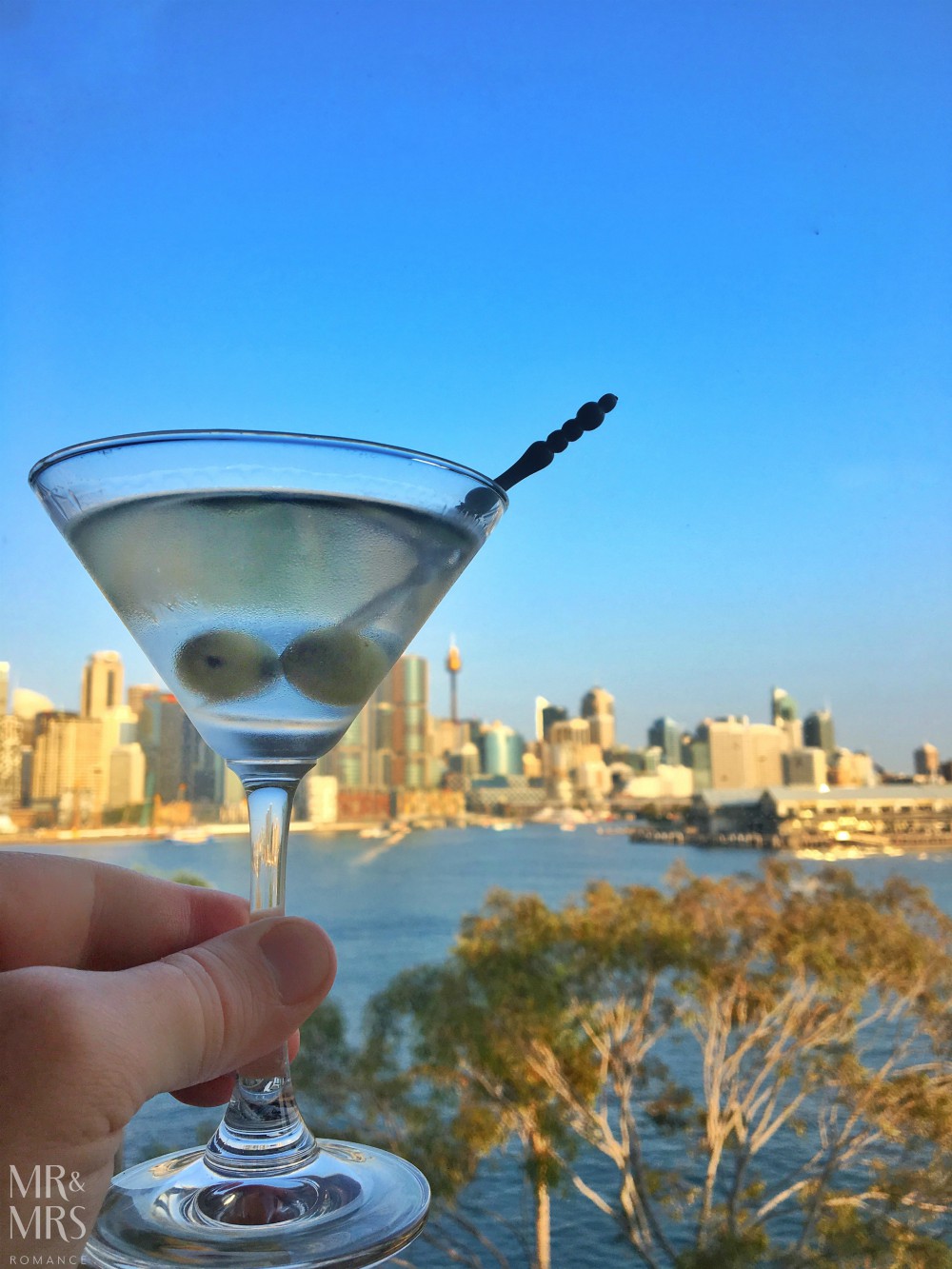 The sun’s still out and it’s knock-off time. That can only mean one thing: martini time! Actually it means a couple of things – martini time and also that spring is genuinely here. #TFFT

I’m also pleased to be giving a new gin a try out. We’ve had our eye on the Hayman’s London Dry gin for a while, but we’re only now trying it. It’s even made (very) close to where I grew up in the UK. Though they are in the process of moving the distillery and Marjorie the beautiful copper still to East London soon.

It’s a beautiful gin perfect for a martini. And their sloe gin does wonders for a negroni. Check out our recipe here.

So, how did you meet? The story of Mr & Mrs Romance

In this series, we’re interviewing couples and asking them one of the most revealing questions about their relationship: How did you meet? I don’t…