Milan is seen as a hub for commerce rather than romance or tourism. But is that really true? We found more than enough to do in this pretty little northern Italian city. Here’s our top 10. 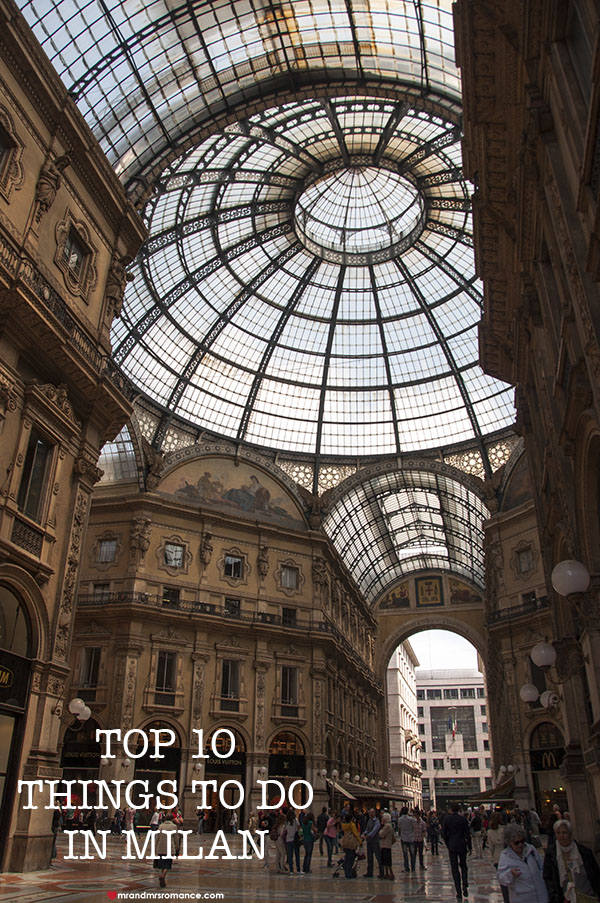 Chic fashion, busy streets, boutiques and effortless style. That’s what I think of when I hear the name ‘Milano’. However, it seems strange that Milan doesn’t have the same historic, architectural or food-based predisposition the rest of Italy wears so well.

Perhaps it isn’t quite as obvious here as it is in other Italian cities, but Milan can pull out some amazing old buildings from its wardrobe when it wants to. And food? Don’t worry. Milan’s got that covered – and has the shoes to match!

Here are our top tips for things to do in Milan. 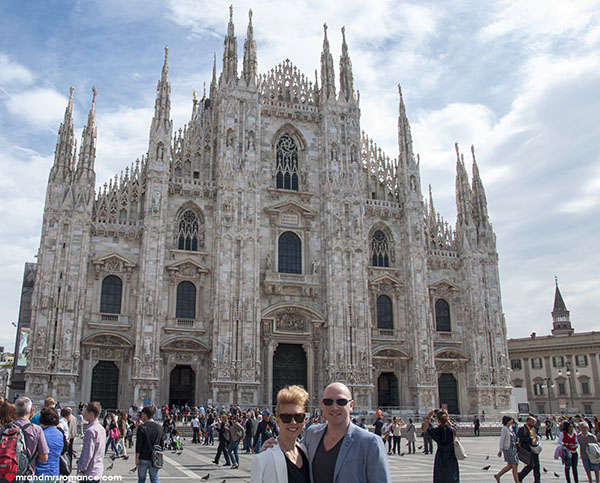 Milan Cathedral is one of the most important pieces of medieval architecture in the world. It’s also bloody amazing. Its enormous white walls are covered with well over 1000 marble statues, and its 100 or so spires tell of a monument that took over three centuries to build.

Inside, you’ll find the dramatic pillars of one of the world’s largest gothic cathedrals, amazing reliefs and mozaics, but also grisly remains of some of the duomo’s saints in situ under their gowns and gold death masks. 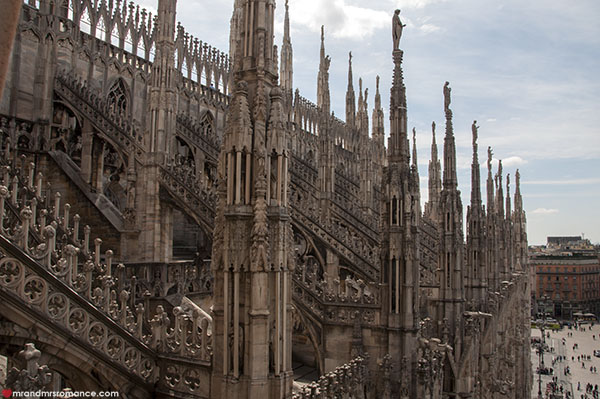 Italian duomos and their piazzas are well known as the centre of their town and are often the tallest historic buildings too. Milan’s cathedral is no exception, so it’s well worth the €7 to go up – it’s only another €5 wisely spent to take the elevator.

From the roof you get incredible vistas over the whole city. Milan’s quite flat too, so you get pretty comprehensive views. If it’s a clear day, you can even see the mountains.

If you don’t fancy the climb and would prefer to take in the sights of the duomo roof with a spritz Aperol in your hand, head to Terrazza Aperol, just across the way in the piazza. 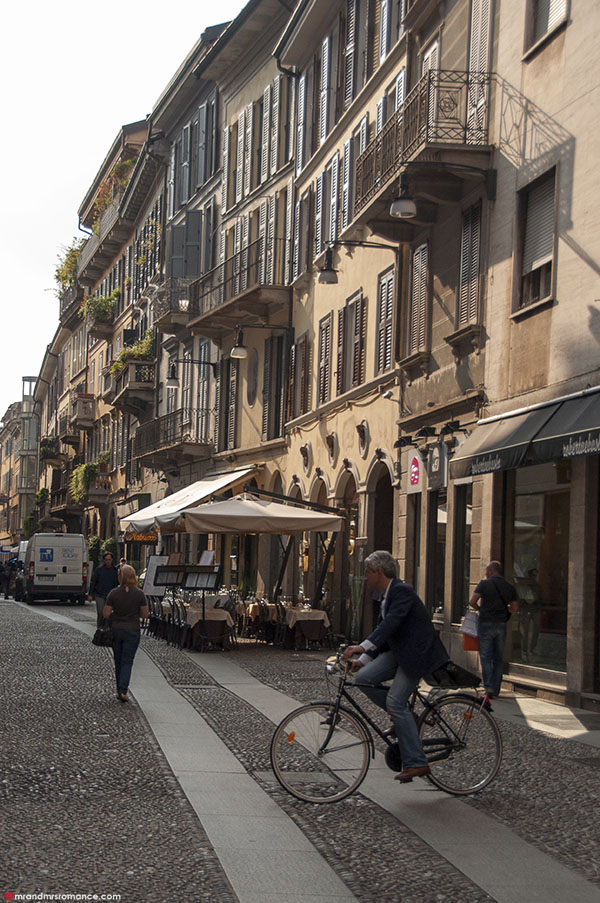 From the doors of the duomo north-west as far as the Castillo Sforzesco.

This whole neighbourhood is where Milan kicks off its Blahnik stilettos and slips into its Gucci slippers of yesteryear.

Still in keeping with that refined elegance but tempered with historic grandeur, Centro Storico shows off the city’s past through its buildings, its cobbled streets, and its elegant statues and fountains.

Start at the Galleria Vittorio Emanuel II – the magnificent shopping arcade adjacent to the duomo – and wander off. 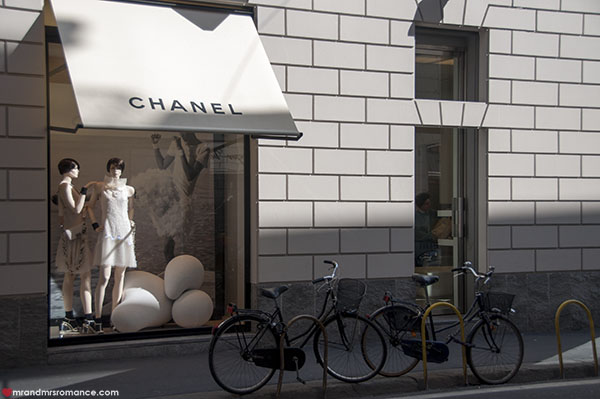 If you want chic, this is the place to go. Quadrilatero della Moda is the big bucks shopping area of Milan. You’ll find all the top-end labels here, so get ready to either grip your wallet a bit tighter or let it fly like a bird released. There’s no middle ground! 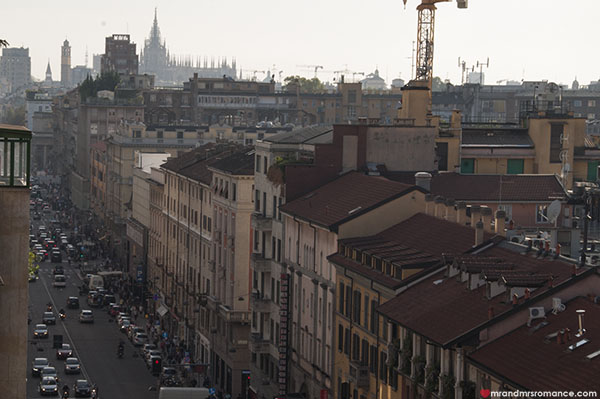 Heading north-east from the duomo and the city centre.

A bit like London’s Oxford Street, Corso Buenos Aires is alive with foot traffic and shops. The shopping here is much more approachable than Quadrilatero della Moda with a more high-street feel.

With the likes of H&M, Zara, Beneton and Fossil, you’re almost guaranteed to find a bargain. There’s also a good range of bars and enotecas along the way. And if you’re anything like me, when it comes to shopping, frequent drinks breaks are a must.

Along this street was the hotel we stayed in. It’s pretty good and our personal accommodation recommendation: here’s our review the Best Western Hotel Galles. 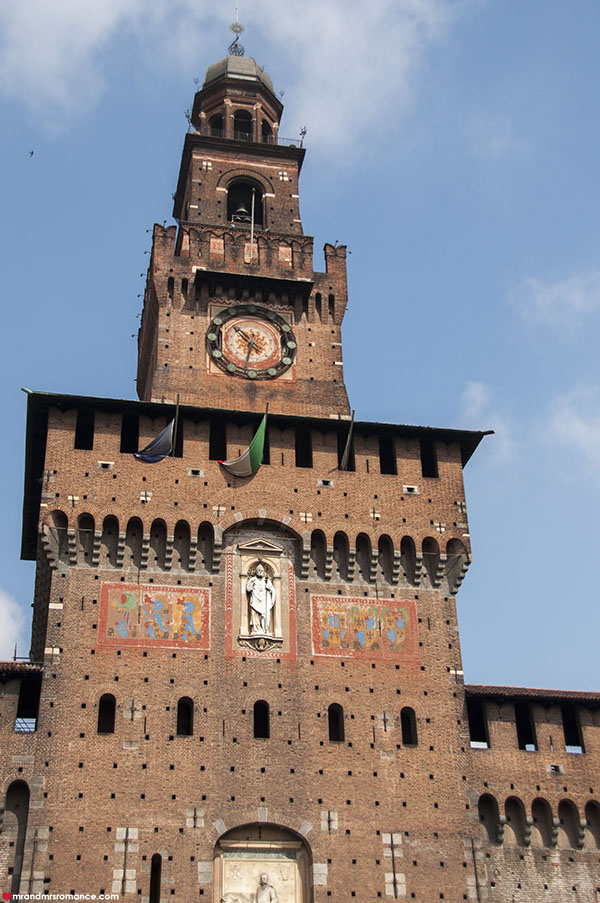 North-west of the duomo city centre.

This magnificent castle is definitely worth a look. Even if you’re short of time and can only fit in a quick walk through the grounds, it’s not to be missed.

Guarded by the impressive bronze statue of Garibaldi and headed up by a beautiful fountain, the castle is flanked by round towered bastions either side of its huge entrance way. You cross a dry moat to find yourself inside the castle grounds – a four-walled garden.

You can go inside the castello for a fee. 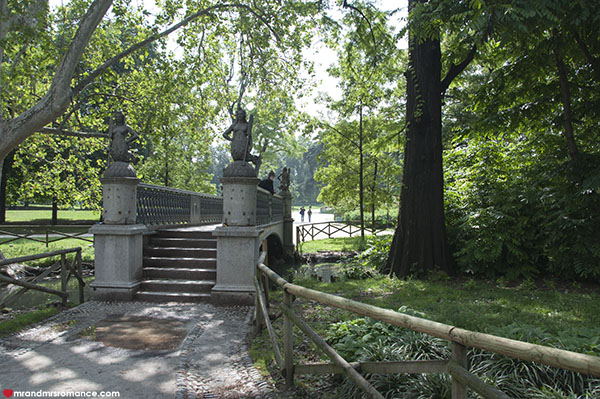 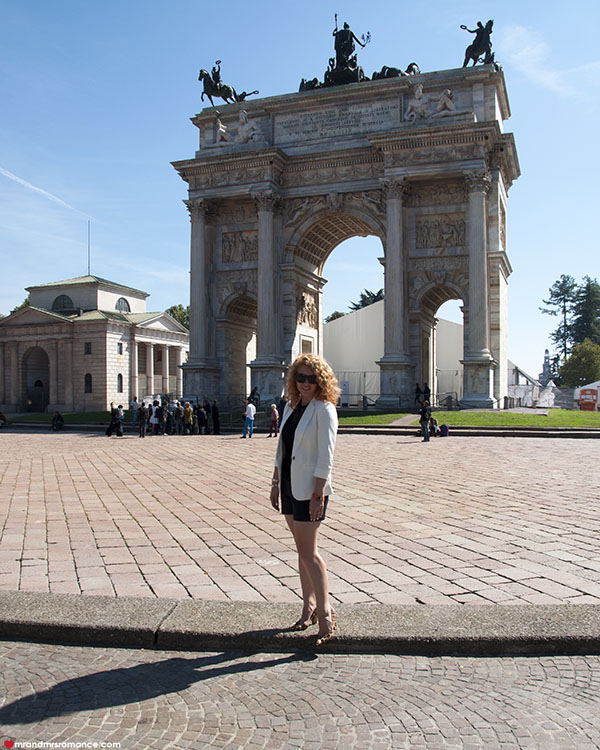 The other side of Castello Sforzesco is the Sforza Park.

The park is huge and is perfect for a picnic (if you agree with such things) or for a romantic stroll. It’s popular with the more active Milanese, so watch out for joggers and cyclists as you explore the grounds.

On the far side of the park from the castle is the Arco della Pace. The Arco della Pace is much like other celebratory arches you’ll find around Europe. It’s covered with beautiful allegorical and historical statues. 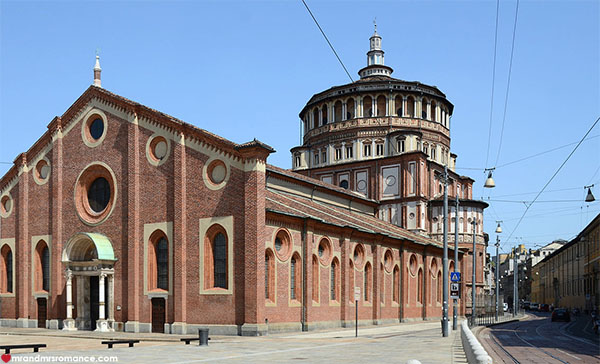 8. The Church of Santa Maria delle Grazie and the Last Supper

West of the duomo and the city centre.

The masterpiece of the Last Supper by Leonardo Di Vinci is in the church of Santa Maria delle Grazie, a UNESCO World Heritage Listed building and a work of art in its own right.

You’ll need to book a ticket to get in and you’ll need to be there at the time on your ticket. There are guided tours, but they’re extremely expensive.

Apart from this church and the Di Vinci within, the Duomo, and the Castella Sforzesco, there are lots of other great museums scattered around Milan.

9. Game at the San Siro Stadium

If you’re lucky enough to be in town when AC Milan are playing at home, definitely get a ticket to a game. The atmosphere in the stadium is incredible – and that’s coming from someone who was brought up with English Premiership football.

Ask the concierge at your hotel for details – they should even be able to book you some tickets. Just make sure you find out the best way to get to and from the stadium. We got a bit lost getting home! 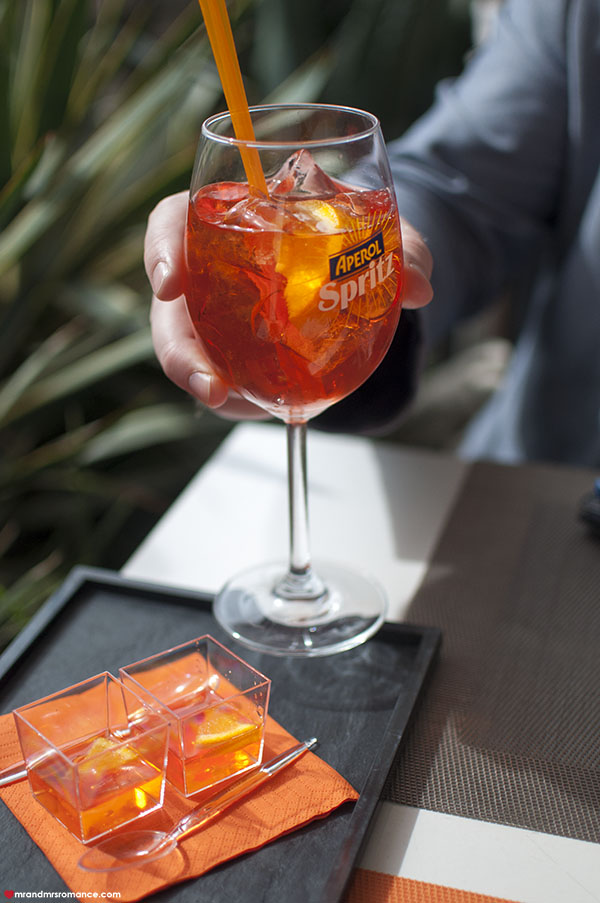 The Milanese pride themselves on this strange pre-dinner custom but it means it is possible to eat dinner for free in Milan. For the cost of a drink, you get access to an amazing array of food at the bar of most enotecas in town.

It’s supposed to be a pre-dinner meal (only in Italy, right?!) but there’s so much food there, and no judgments! This ‘aperitivo hour’ – similar to our happy hour only food based – usually goes from 6 or 7pm until about 9pm. Or until people stop eating. 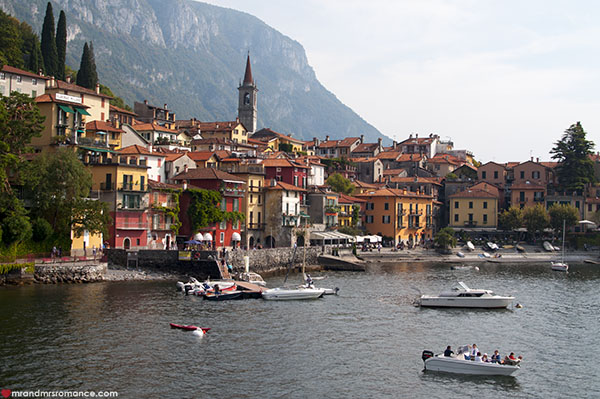 If you’ve had enough of the big city, why not take a day trip out to Lake Como, arguably one of the most spectacular places to visit in the whole country – if not Europe!

Surrounded by mountains, popular with the rich and famous (yes, George Clooney does have a house here), and only an hour out of Milan by train, it’s no wonder why the Milanese head here for their weekend breaks.

Here’s our quick guide to Como and also how to get to Como from Milan by train.

Have you ever been to Milan? What did you get up to? Where would your favourite part of Italy be? Tell us in the comments!

How to travel around Puglia, Italy – trains, planes and automobiles

Although Puglia in south-eastern Italy has been much over-looked by tourism over the years, it’s surprisingly easy for visitors to explore. Here’s our guide…