The most exciting thing about He Said, She Said is wondering if we’ll still be married by the end of each post! We both write on the same topic but we dont read the other’s work until after it’s published. 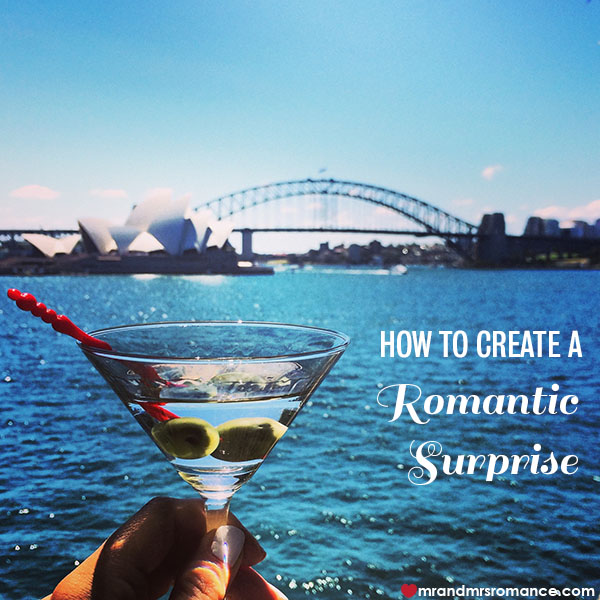 Our friend Scott has inspired this post – he wanted to surprise his wife with something romantic. Thanks for the great idea for this He Said, She Said, Scott. We hope it helps!

If you have any ideas for a He Said, She Said, send us an email, message us on Facebook or Twitter, or tell us about it in the comments section below!

The big romantic gesture is never as good as something you’ve thought through carefully or that you’ve come up with on the spur of the moment.

Think beyond the grand gesture and listen to what your partner really wants.

Before we started writing this, Mrs Romance and I agreed to follow the structure of ‘what I would do’ and ‘what she has done’ and vice versa to answer this quite tricky question.

What I would do

When I’m thinking about doing something romantic for Mrs R, I start off with working through any mental notes I’ve made about things she likes to do and things that have produced a positive response in the past.

Every Valentine’s Day, our friends take it in turns to cook each other a four course meal at home. Great idea! The 14th Feb can be so over-rated. Here’s our previous post on how we feel about Valentine’s Day.

Having said that, there are other possibilities for V Day other than an over-priced under-staffed restaurant. Here are our 7 ideas for an alternative Valentine’s Day.

Most importantly, these do not have to be big gestures. Big gestures are all well and good, and they get the required ‘wow’ response, but they have their pitfalls.

Why the Big Gesture is fraught with problems:

Instead, I try to think strategically.

Is there anything she likes doing that you don’t? This stuff is gold. Do them with her and she’ll think you’re a saint. Really, you’re a martyr, but don’t tell her that! For example, Mrs R loves picnics. I hate them. But for a special occasion, I’ll organise one for her.

Make this sort of thing a surprise and you’re golden! And this is where you can splash out too. For example I’d include an expensive bottle of champagne in the picnic basket. Or a martini kit. Or you can pack a bit of caviar or something posh like that.

You don’t need to fill the hamper with diamonds.

Package smaller surprises up into a bigger whole. This really works – especially if your lady likes surprises. Mine LOVES them! You’ll be able to slow-release these mini surprises throughout the day.

Often the romantic surprise is about anticipating what she’ll need and preparing it beforehand. You know what your lady’s going to enjoy at different times of the day.

And then there’s the evergreen stuff you can pull out at any time. For me, I’d go to Mrs R’s favourite gelataria and hide a tub of ice-cream in the freezer.

One of my friends in England convinced his girlfriend she needed a passport to go to Scotland on a holiday he’d organised. It wasn’t until they got to the departure gate that she realised they were about to board a flight to New York. He’s a magician that man!

And one more thing: buy her flowers. It’s not as hard or as expensive as you think it’s going to be!

One of the best romantic surprises Mrs Romance has organised for me was for our first anniversary. She organised everything and rented a little holiday home by the beach on the south coast. When we got there, she produced all this extra luggage from our car.

She’d packed enough stuff for us to be completely self-sufficient for the whole time we were there. We didn’t even need to go out of the house apart from to go to the beach.

All my favourite food was in there, not to mention my favourite music and DVDs. A stroke of genius, Mrs R. You truly know the way to this man’s heart!

What I would do

In trying to write this post, I laughed with Mr R that I think we should change the name of this site to just Mr Romance as I don’t think I do many romantic things for him.

He reassured me that most romantic gestures are lost on blokes so you don’t really need to try that hard.

He also told me that thinking of your partner and doing something nice for them is what’s really romantic.

The old adage: ‘the way to a man’s heart is through his stomach’ is not a cliché.

To create a romantic surprise for your partner, don’t overcomplicate it. Think of a few of their favourite things and organise a date that involves all of them.

For example Mr R loves good wine, good food and a cigar. I would book a dinner date at a restaurant that was close to a bar where we could go afterwards for a cigar and a nightcap.

Or I would hire a cool car for him to drive and take a day trip up to Palm Beach for lunch at the Boathouse. Extending this for a weekend away where you organise all the food is another winning romantic gesture.

As long as you take care of all the small details so that they have nothing to organise or worry about, you know they’re going to love it.

What he has done

Mr R is pretty good at the big romantic gestures, but in everyday life, the small romantic surprises are the ones that mean a lot to me.

Mr R will buy flowers on a Tuesday for no reason. Or he’ll ring with an idea for what to cook for dinner and buy all the groceries on the way home.

The reason that’s romantic is because I hate coming up with ideas for dinner. If you can get rid of a chore from my day and replace it with a gift, that’s romance.

Jim once surprised me by picking me up from work on a Friday with a bag packed for a weekend away.

He pretended he was driving to meet someone on our way home. I did wonder what was going on at first but it wasn’t until he kept driving past this supposed rendez vous point that I really got suspicious.

When we arrived at this cute little BnB on the coast in the middle of nowhere, he produced a suitcase of my clothes he’d packed for me. It was a very slick touch.

Mind you, this can be as tricky one as knowing what to pack can be a minefield but Mr R aced it. The whole weekend was a wonderful romantic surprise.

What’s the best romantic surprise you’ve ever had? Tell us about it in the comments!