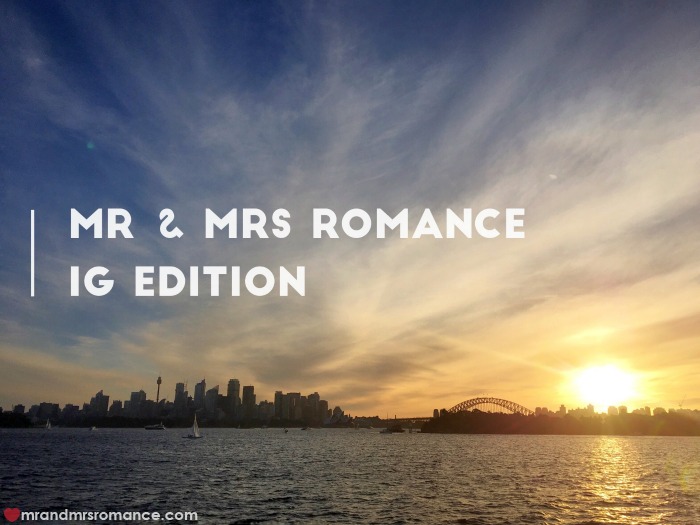 It’s been a pretty solid week here at Romance HQ. Plenty of work going on (including our little facelift on the site) and some excellent socialising too.

We’re also still putting our itinerary together for our next big trip in May. We’re heading over to Europe for a couple of months to check out a few new places.

Apart from our chorus line of the UK, we’ll also be going down to the southeast of Italy and exploring Puglia and Bari. We’ve also got our eye on Barcelona, Rotterdam and maybe a bit of Sweden, so it’s going to be a fun trip.

Can’t wait to share all our experiences with you.

In the meantime, here’s what’s been going on this week just past. 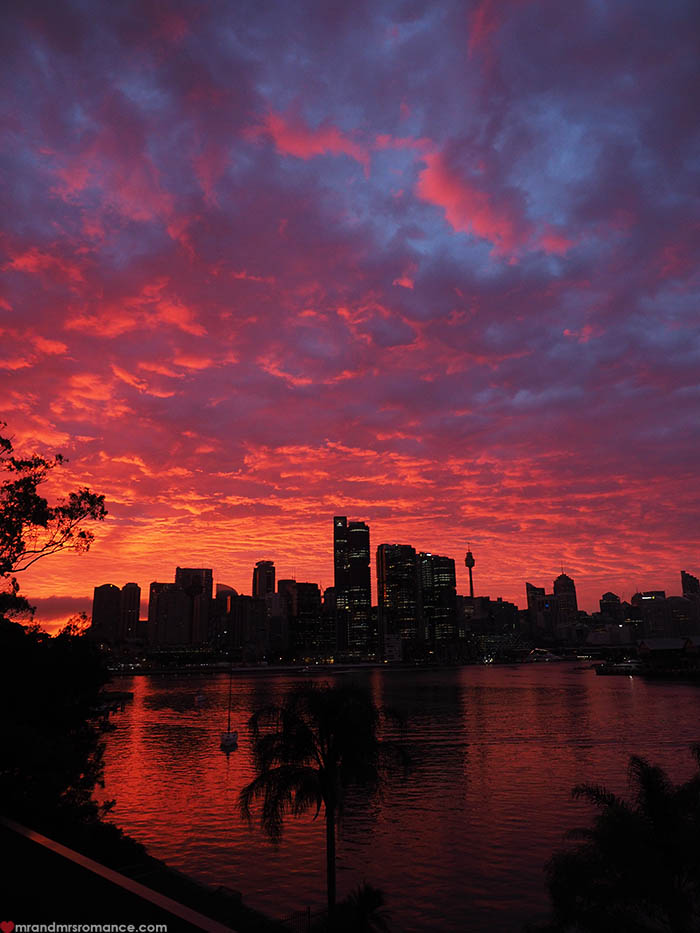 The sky this morning was absolutely incredible. I say ‘was’ because once again Mrs Romance was awake – and here’s the difference – willing to get up and actually take a photo.

I’m often up before her, but there’s no way I’m leaving the confines of my comfy bed under any circumstances. There’s just no way. And I think Mrs R is actually a bit of an enabler here.

She brings me the sunrise by taking these photos! 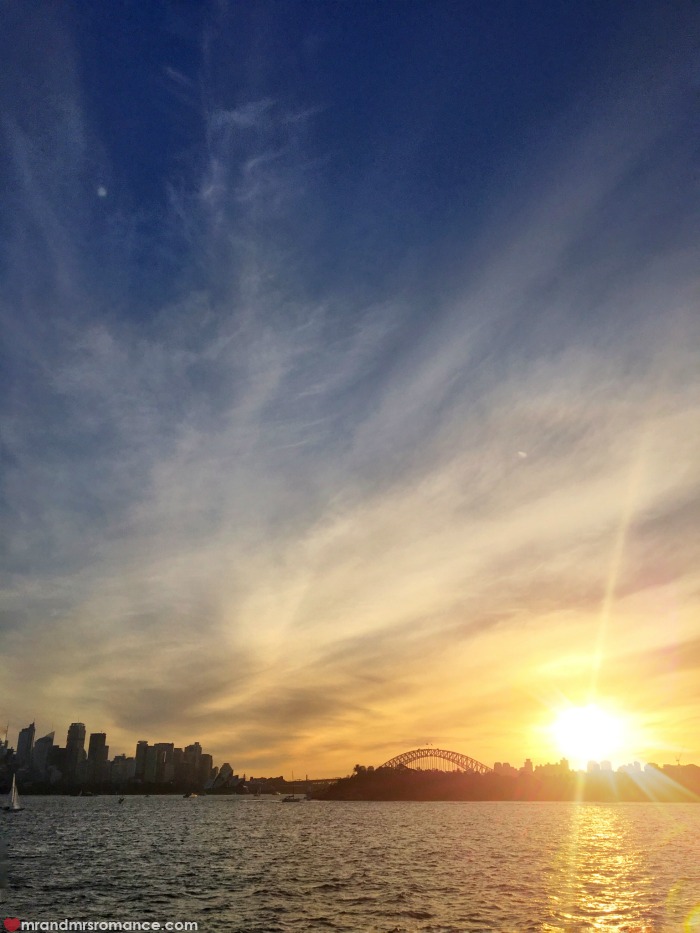 At the other end of the day – a time I feel much more comfortable existing in – the sunset over Sydney is exquisite. We’re heading north of the Harbour tonight to wish a friend of ours a happy birthday.

The closing jaws of Sydney’s social scene seem ever poised to chomp down on us – it turns out our friend Deb knew Mrs Romance (and by association) me back in 2000! And the conduit – our friend Rohan – knew all of us at the same time but didn’t realise we didn’t know each other.

It was clearly meant to be though; however many years on from that time and we’re all the firmest of friends. 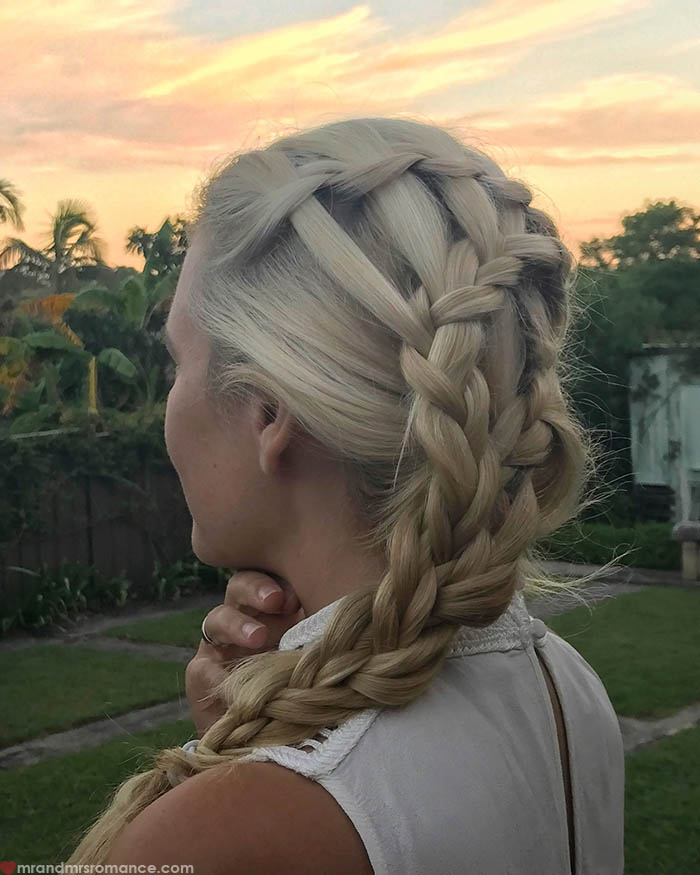 Talk about those Sydney jaws closing, the teeth don’t get much tighter together than this! Tonight we’re at our spectacular friend’s house Mrs Woog for dinner.

One of her good friends, who Mrs Romance has worked her braiding magic on here, is somehow related to one of Mrs R’s best mate from high school! They may even know each other! The degrees of separation in this town are virtually non-existent.

I think it’s the sign of a very good party when there are no photos from the night. Mrs Woog has put on an excellent evening. We do have some photos, but they’re not at all flattering – taken too close to the end of the night! 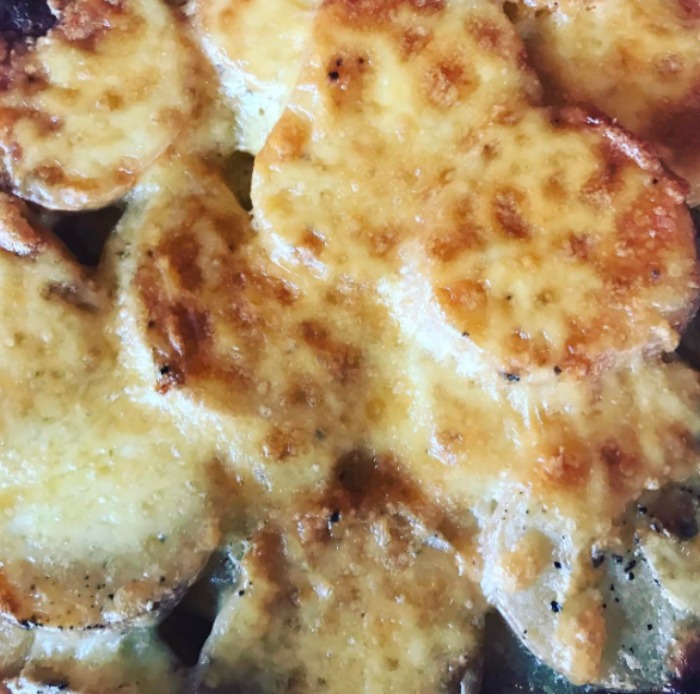 By the way Mrs Woog is not only a marvellous host, a potty-mouthed bullshit bloodhound and one of the country’s top bloggers. She’s also the creator of this: the best potato bake you’ll ever sample.

Check out the recipe (and her nightmarish dance-with-the-devil dishwasher incident just before we came round for dinner) here. 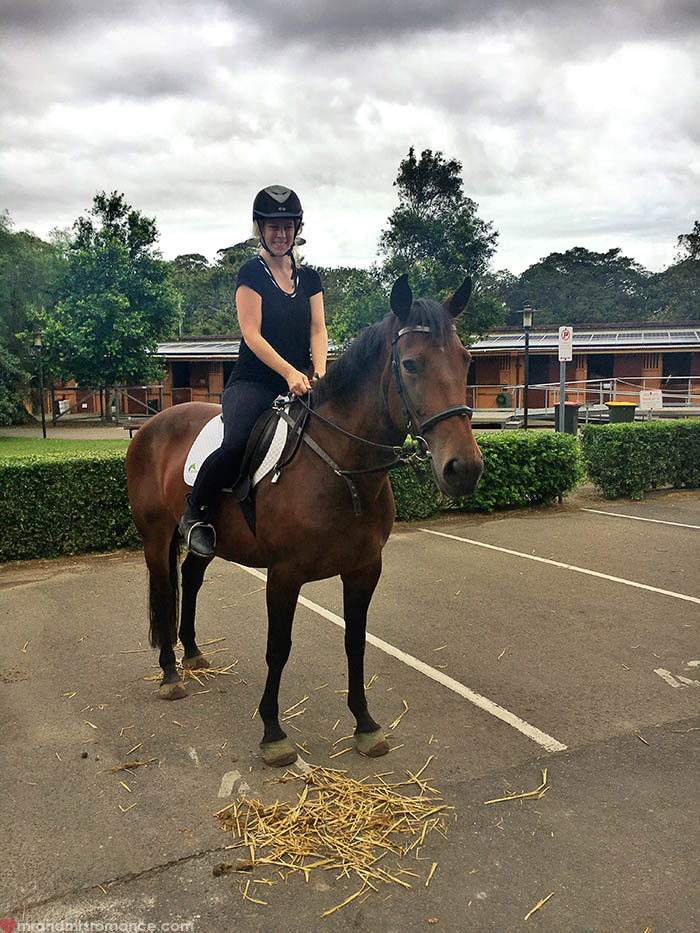 Mrs Romance is out and about on her horse-riding lesson this morning. I’d say she’s coming on leaps and bounds, but at the moment she’s just working on her rising trot.

I like her posture though. That seems good. I did also mention to her when she first showed me this photo that it looks like she’s on a fake horse whose stuffing is coming out! 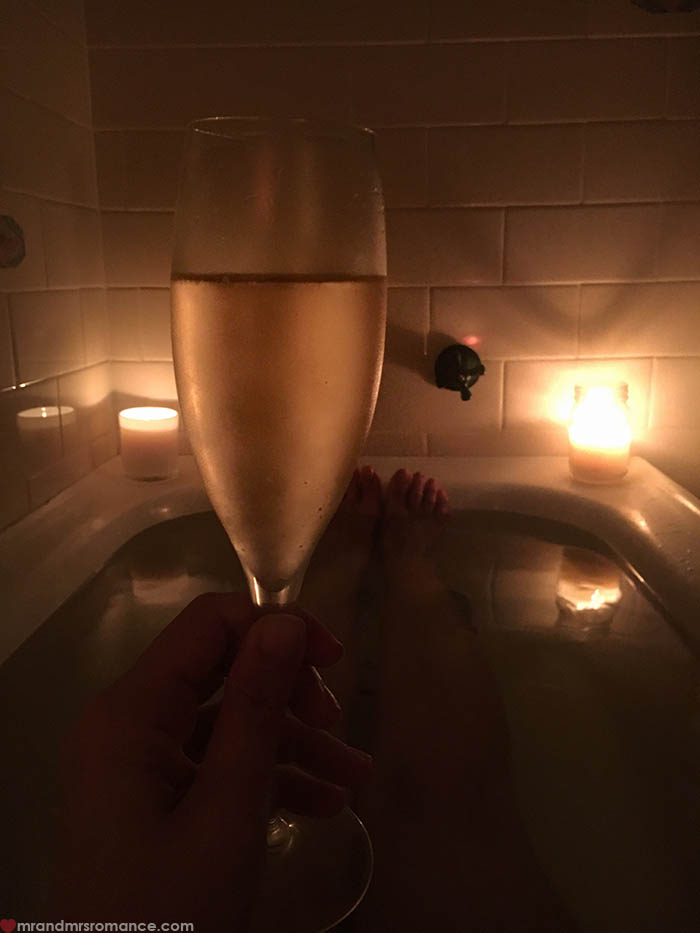 Mrs Romance has had a tough day. The horse riding has really taken it out of her. Plus it’s our 198th month anniversary – yes, we keep track. Here’s the story of how that works.

Anyway, I thought it’d be good to run a bath for her. She doesn’t usually enjoy baths – neither of us do actually – but this time she’s stayed in there for about 45 minutes!

Then again, I am making regular visits in to ensure her champagne glass is topped up. That’d help, wouldn’t it? 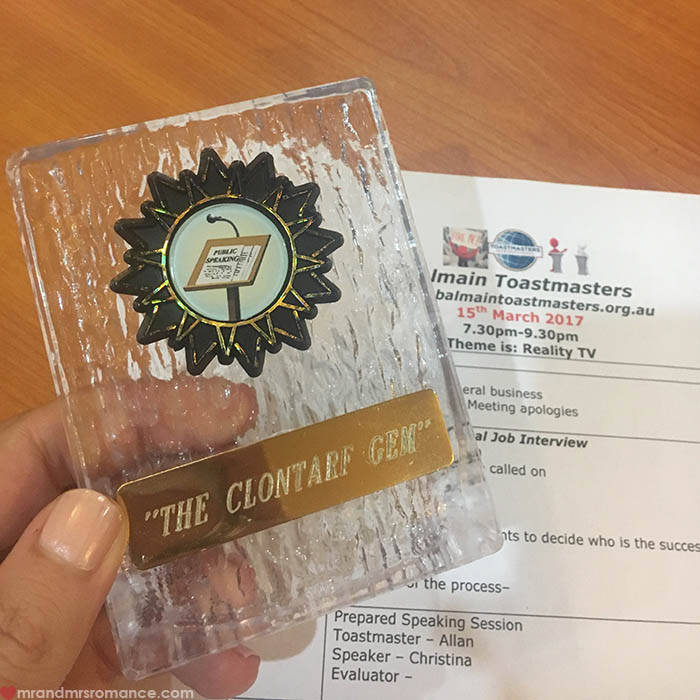 Not many people know this, but Mrs Romance is a member of Toastmasters – an international public speaking ‘club’. Tonight Mrs Romance has come home with a big grin and a story about how she won the much-coveted ‘Clontarf Gem’.

This is a special award for speaking during her chapter’s sessions and this week it’s hers! Things seem to be going well for her at the club – it’s such an interesting group too. 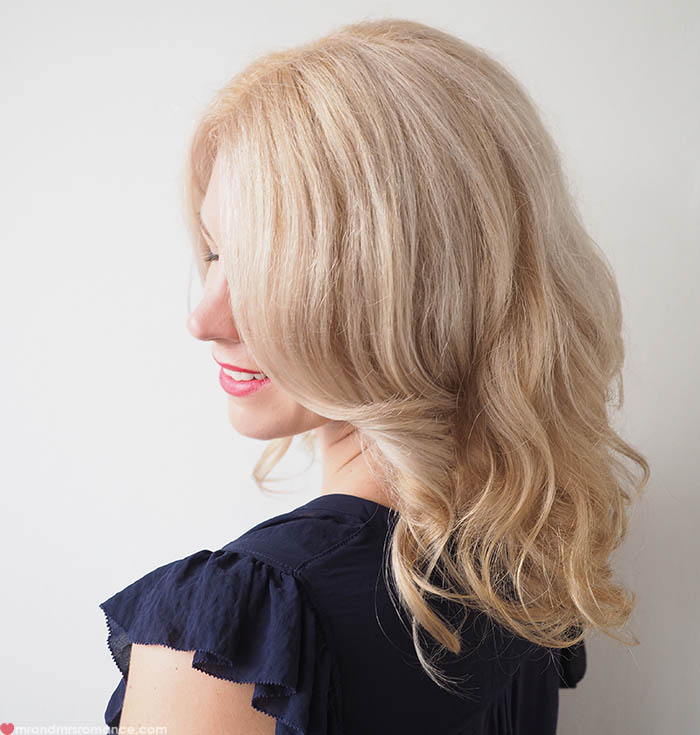 I’ve just realised, this IG Edition is mostly about Mrs Romance, isn’t it? What an interesting life she leads! Well, today – ahead of some serious video shoots we’ve got planned, she’s had her hair done. She is Hair Romance after all.

Her hairdresser – the ever-esteemed and often-steamy – Stevie English has done an awesome job once again. 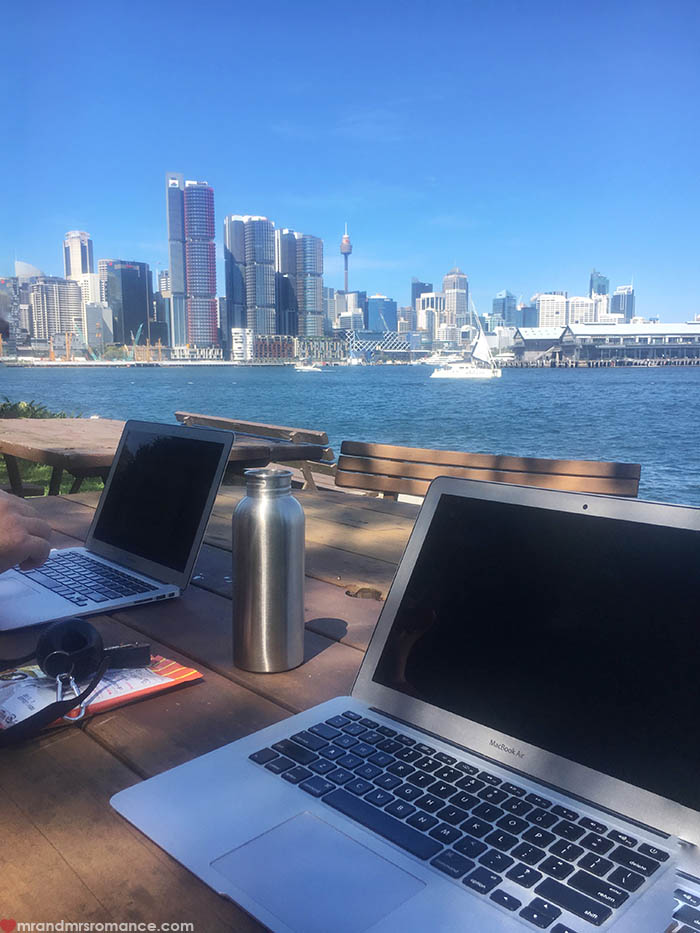 Today, we’re enjoying the fleeting sunshine and have taken the office outside. It’s got to be the best part of what we do: being able to work from (almost) anywhere.

This is out front garden but even though we can almost see the internet router, we have zero signal. That’s probably just as well though. Might actually get some work done now! 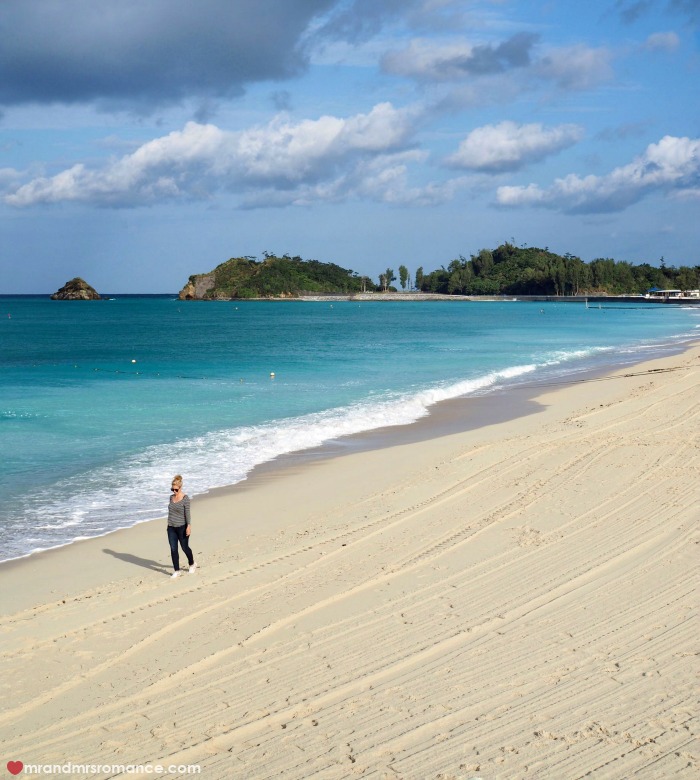 Our minds are often taken back to the last most beautiful place we were in. This is Okuma Beach in Okinawa. We never thought there were beaches in Japan like this – even though we’d heard that Okinawa is known as the Hawaii of Japan. 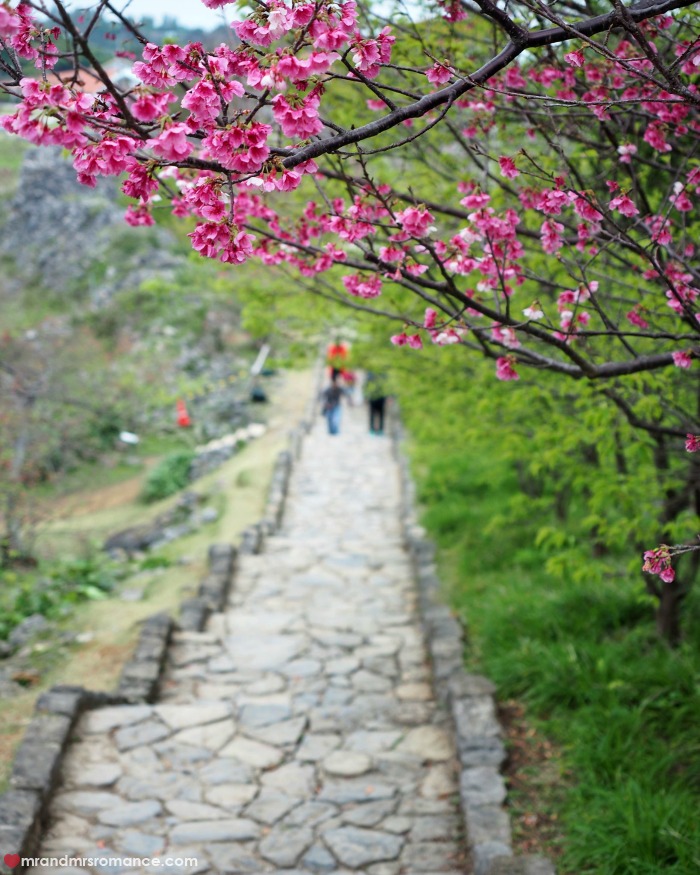 Okinawa is so much further south than the rest of Japan that its Sakura – its cherry blossom season – happens a good couple of months earlier.

This is all that’s left of this year’s in Okinawa, while in the rest of the country it’s only just beginning. 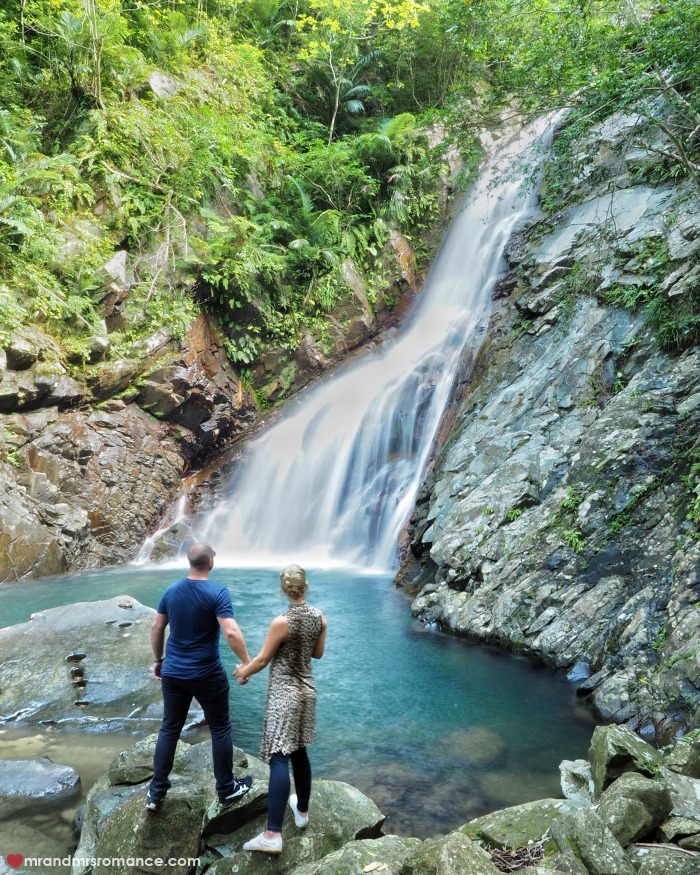 The Hiji Waterfall makes up the tallest falls in Okinawa. It’s in the heart of a large section of national park and jungle in the northern part of the island. The walk there is vigorous with plenty of stairs to ruin your knees on, but as you can see the end result is well worth it. 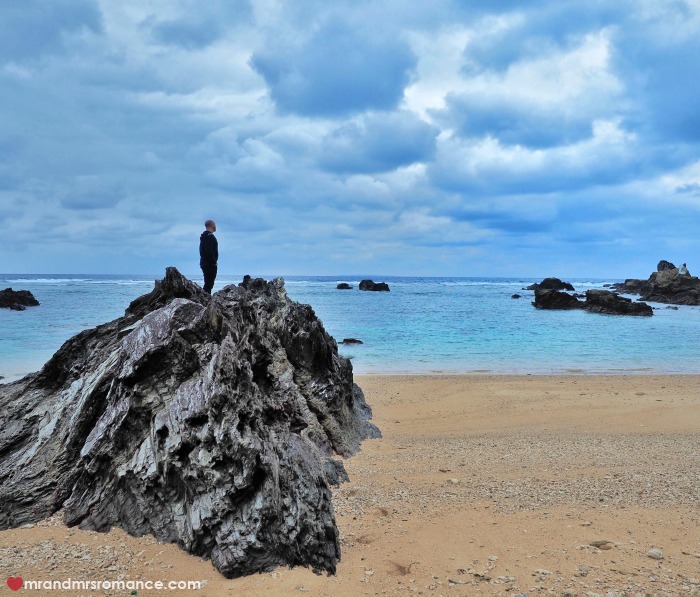 Okinawa has some very strange rock formations. These look volcanic but the sandy beach says it’s not a volcanic area. There’s another national park nearby this spot called the Daisekirinzan, which has some even weirder rock formations.

The locals love this place and say it’s full of Power Spots – places with great spiritual power and relevance. I can see how that works. These rocks are pretty amazing. 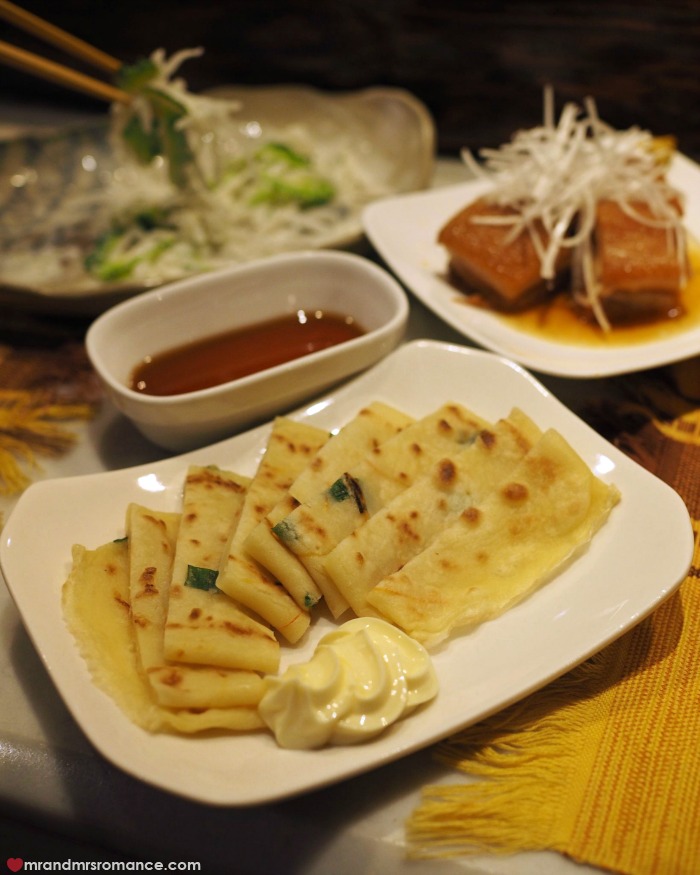 Breakfast in Okinawa was always a pleasure. Our hotel – the JAL Private Resort Okuma – has a few restaurants within its walls. This spread was at the excellent onsite izakayacalled Akame, where they serve traditional Okinawan food.

The pancakes are called hirayachi and they’re bloody delicious. They’re really simple to make, which confuses me as to how they’re so tasty. It’s just a simple pancake batter of flour, water, salt, green onion and bonito flakes.

Simple with very few, inexpensive ingredients – and that’s possibly because Okinawa is and has always been the poorest of the Japanese prefectures.

The sun setting over Okuma Beach is truly a beautiful thing. We didn’t get many cloudless evenings while we were there, but this one was perfect. We sat on the closed beach bar verandah with a couple of beers and snacks from the Family Mart for probably the most memorable evening in Japan.

Isn’t it funny how that happens? The simplest of times become the most valuable.

Well, that’s all we’ve got for you in this week’s IG Edition. Let us know what you think of our new site look. It cost a fortune, so please be nice about it! Speak to you again soon

An Englishman, a Scotsman and an Australian walk into a distillery…

Things are stirring in the quiet town of Corowa – tucked away on the southern border of New South Wales. The old abandoned flour…